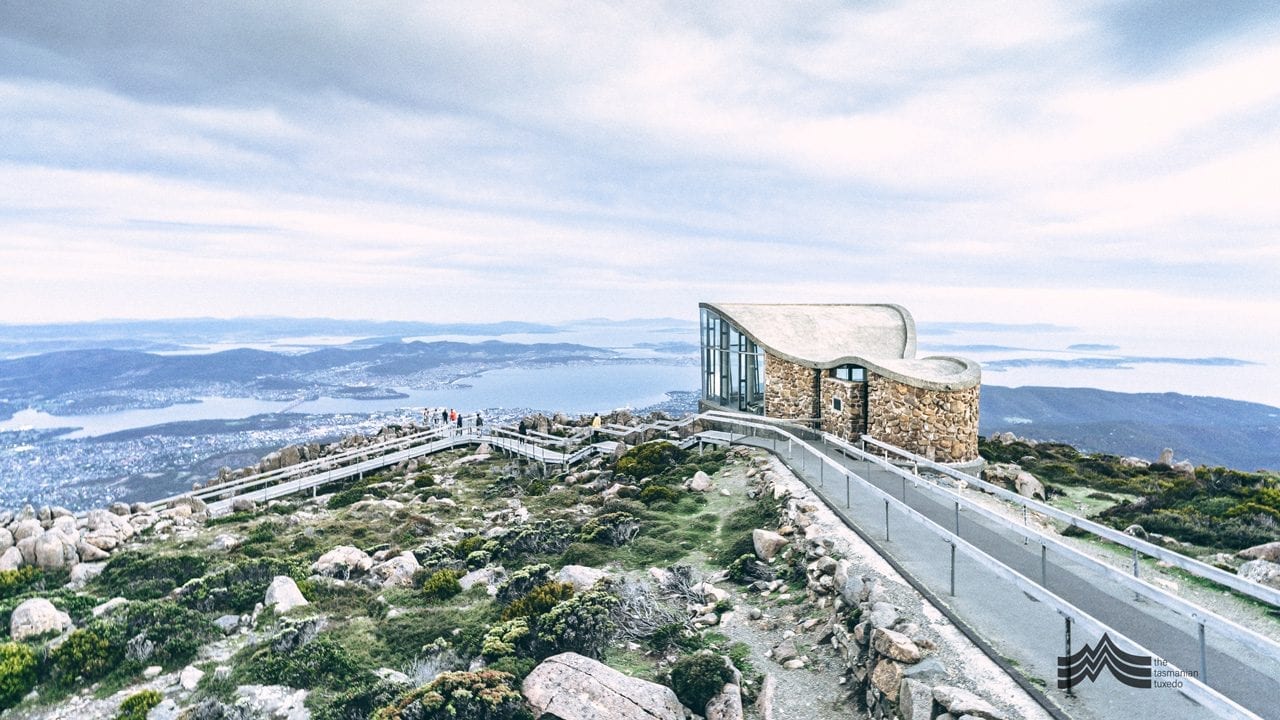 Solemnly standing guard above Hobart, kunanyi/Mount Wellington almost wraps itself around the picturesque harbourside city. Rising from the river Derwent, city suburbs quickly give way to expansive foothills flanked in sclerophyll forest. This is a mountain that treats explorers to a characterful visual landscape of changing typography and altitude. Its complexity is ramped up another notch by its diverse geological history and varied supples of moisture and sunlight.

‘The mountain’ as its affectionately termed by Hobartians, is particularly recognisable for its iconic dolerite columns. Spanning over 30 metres in height, these beauties take their nickname for their resemblance to the pipes of a church organ. They beg to be climbed but remain the domain of those only with the right gear and expertise. Admire the organ pipes but remain ever aware of your limits.

Having been referred to by many names over the years, the Tasmanian Government’s Aboriginal and Duel Naming Policy saw the mountain officially crowned kunanyi/Mount Wellington in 2013. Why the change? ‘kunanyi’, pronounced ‘koo-narn-yee’, means ‘mountain’ in palawa kani, the language of the Tasmanian Aborigines. Its adoption fittingly recognises the first Tasmanians to have a connection with this majestic giant. In more recent times, it’s been referred to as Skiddaw in Dutch, Montagne du Plateau in French and Table Hill in English, however ‘Mount Wellington’ was bestowed upon it in the 1830s in honour of the Duke of Wellington. 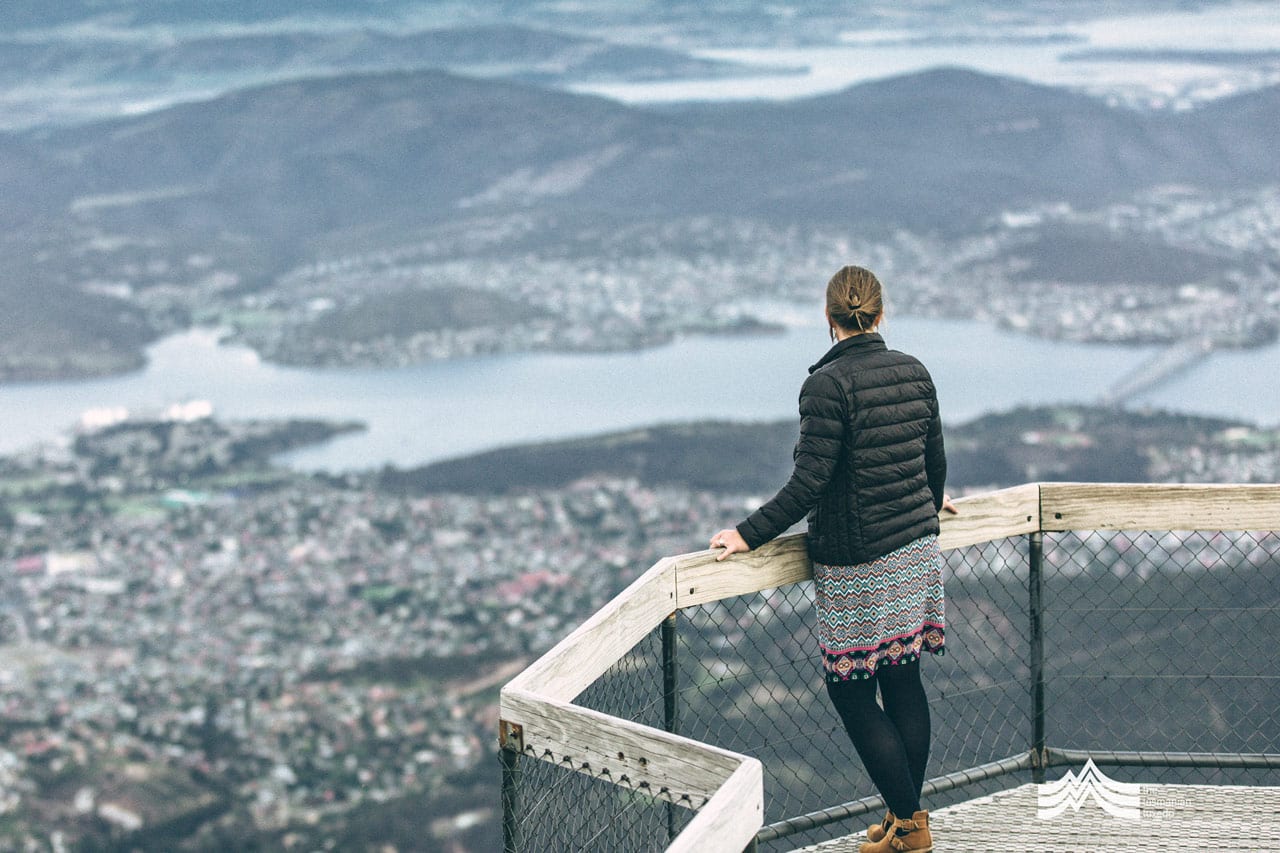 Whatever you call it, it’s hard to find a Hobart native without a connection to the mountain. As the most significant landmark in Australia’s southernmost capital, growing up in Hobart is synonymous with adventures in Wellington Park – the 18000 hectares of natural reserve that surrounds this icon. Whether you love to walk, mountain bike, horse ride, exercise your dog, climb, play, eat, or simply just be, you can find a place somewhere on this mountain to hide away and follow your passion. Standing at 1271m above sea level, kunanyi/Mount Wellington is not taking on any record attempts in terms of height, but it is the perfect introduction to the Tasmanian environment. Be prepared for all conditions, all weather types and all manner of experiences. Don’t like what’s happening now? Come back in five minutes. Tassie loves to move the goal posts and Mother Nature is always in control of the game.

Pinnacle Drive snakes its way up to, you guessed it, the pinnacle. For the time poor, it’s only a 20km drive from the CBD, however you’ll appreciate the experience so much more if you make it there at least partly on foot. If you’re in Hobart during November and fancy yourself as fit, take on the challenge of the Point to Pinnacle. Dubbed ‘the world’s toughest half marathon’, this gruelling 21.1km event sees participants depart Australia’s oldest casino, Wrest Point, at sea level and weave their way to the mountain’s peak. It’s not for the fainthearted. If you think that sounds like a challenge, spare a thought for George Bass, the first European to reach the top on Christmas Day back in 1798. Imagine taking on this sleeping giant without any tracks or the comfort of today’s lightweight gear. Nice work George.

There are numerous walking tracks to take you to the summit. Make local research your best friend when you’re searching for the right one and ask around for a few tips. You can leave the car at various spots and treat yourself to spectacular views, hidden caves, pure waterfalls and luxuriant gullies. Heavy snowfalls in the winter months can gift you simply stunning experiences, but they can come hand in hand with treacherous conditions and road closures – so be sure to stay tuned in to the forecast. 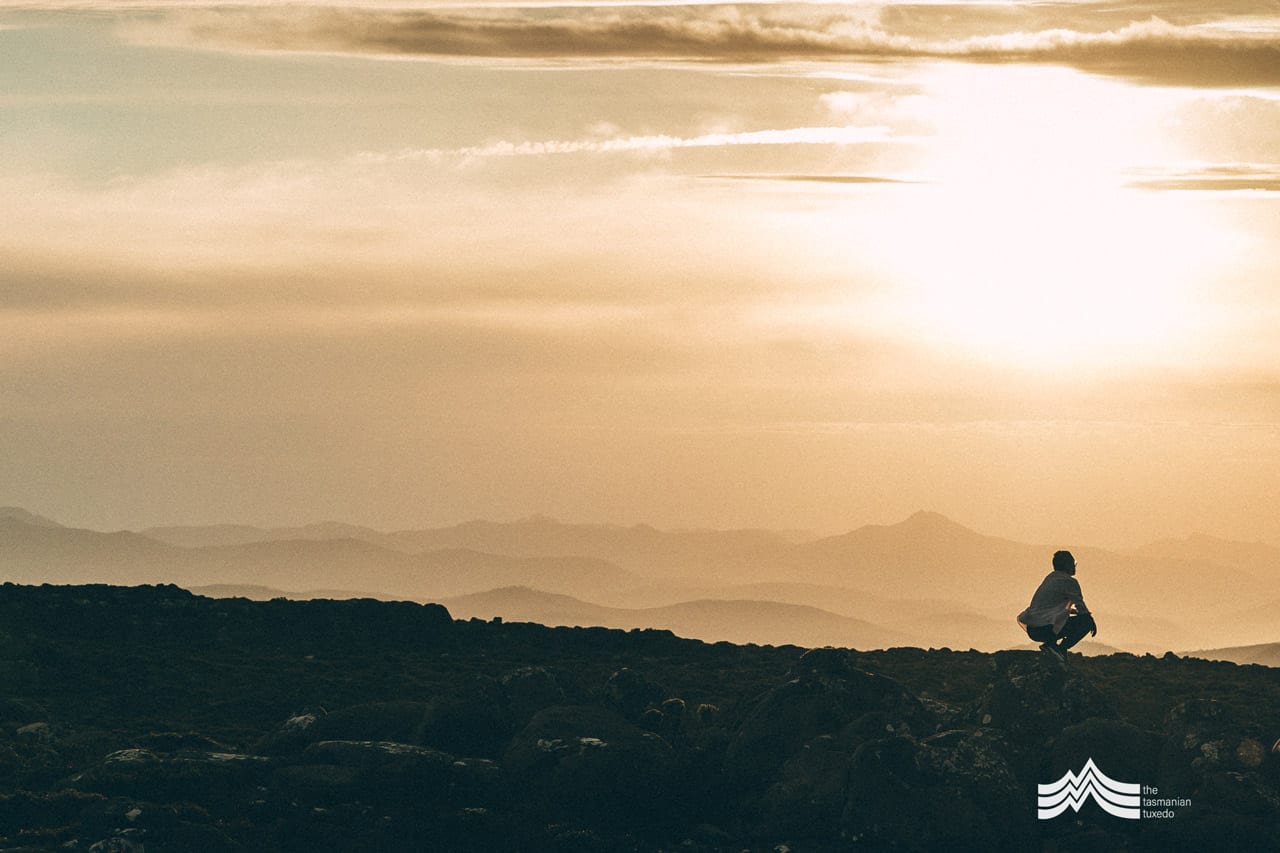 Charles Darwin provided a fitting description of the reward at the top in his 1836 book ‘The Voyage of the Beagle’.

“… The summit of the mountain is broad and flat, and is composed of huge angular masses of naked greenstone. Its elevation is 3,100 feet [940 m] above the level of the sea. The day was splendidly clear, and we enjoyed a most extensive view; to the north, the country appeared a mass of wooded mountains, of about the same height with that on which we were standing, and with an equally tame outline: to the south the broken land and water, forming many intricate bays, was mapped with clearness before us. …”

Research tells us that the first structures to be built on the pinnacle appeared around the mid 1800’s (mtwellingtonhistory.com is a great go to for history buffs). Local wood and stone were convenient materials of choice, and not a lot has changed today. Adventurers and meteorologists alike have tackled building on the mountain’s pinnacle for close to two centuries with varying degrees of success. 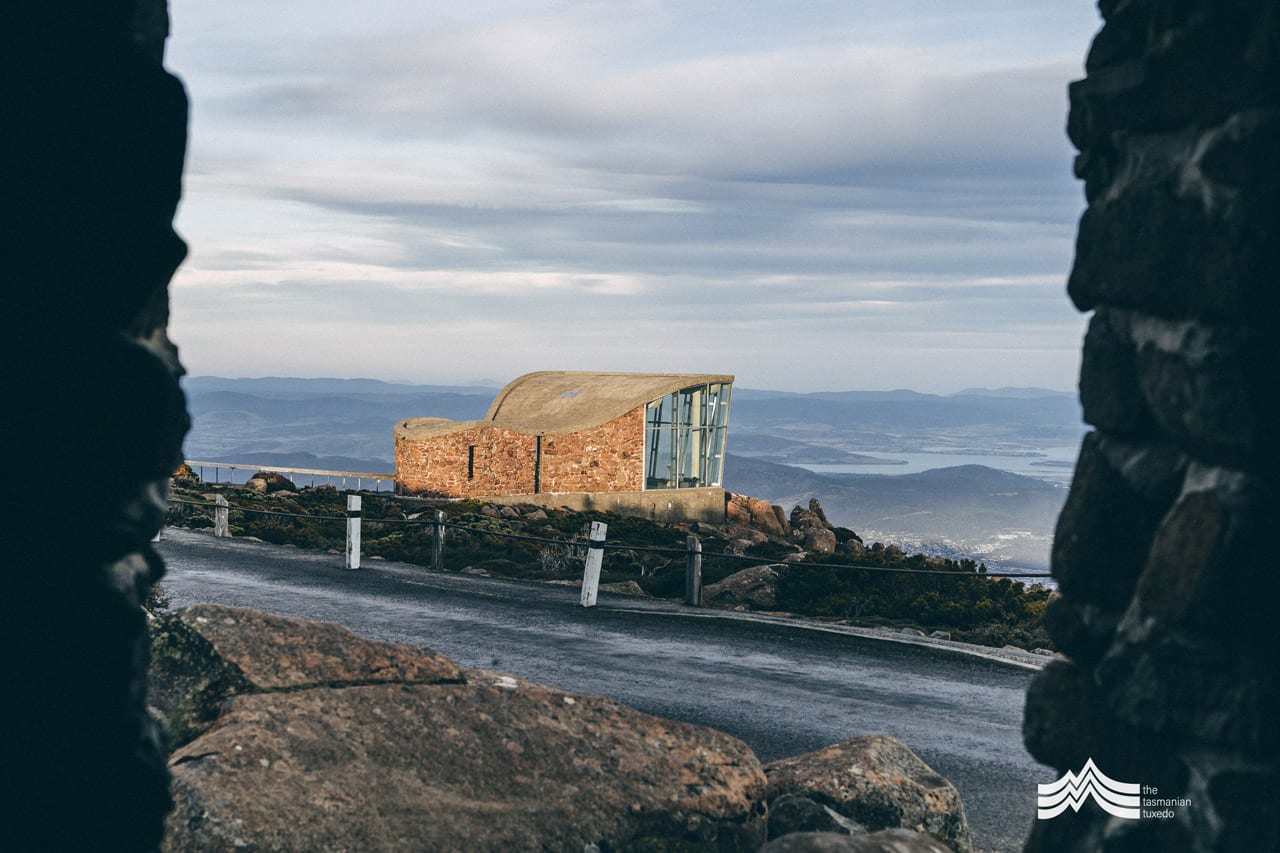 Surviving summit structures include Rock Cabin, erected at the summit in 1928 by the Hobart City Council. Built of stone, it boasted both a chimney and a water tank to meet the needs of visitors. Rock cabin still offers respite from the weather, however most visitors are quick to dismiss a visit as they hurry from the latest incarnation of a summit shelter back to the comfort of their vehicles.

There’s still not a lot in terms of civilisation at the boulder-strewn pinnacle. And that’s the way we like it. The transmission station and towers aren’t open to visitors, so it is the current observation shelter that attracts those making the trek to drink in the views. Completed in 1988, it sits perched overlooking the city. Look closely and you’ll be able to recognise a nod to some of its predecessors in terms of building materials. Its rocky foundations hark back to times of a bygone era, but one not all that long ago. The addition of concrete and glass make it only slightly more comfortable than those that came before it.

If you closed your eyes, one could be easily be forgiven for thinking they are standing in a huge commercial fridge. There is no heating. It’s usually bitterly cold. On the up side, you are sheltered from the winds. And on a fine day you’ll truly come to appreciate Darwin’s words as an intricate web of waterways, islands and landforms are laid out before you like a colourful magic carpet.

This is a room that causes people to lower their tones. Stand there and listen to their murmurs. It can be a magical mix of local whispers fondly reminiscing through to the excited imaginations revealed through varying languages. There’s not much in the shelter itself – some seating, a small amount of historical and geographical information and a couple of telescopes. An informative chart to help identify key landforms within the panorama before you would go a long way. It’s well worth throwing a map in your bag if you’re heading up there.

Keep three little words in the back of your mind when dressing for your pinnacle experience ‘wind chill factor’. On any given day it’s likely to be about 10 degrees (we’re talking Celsius here) cooler at the summit than it is in downtown Hobart. That’s without the icy blast that you will swear has come direct from the Antarctic. Think beanie, gloves and the thickest of socks but don’t forget the sunscreen! Oh, and this is the ultimate spot to don your Tasmanian Tuxedo and capture that authentic island pic. 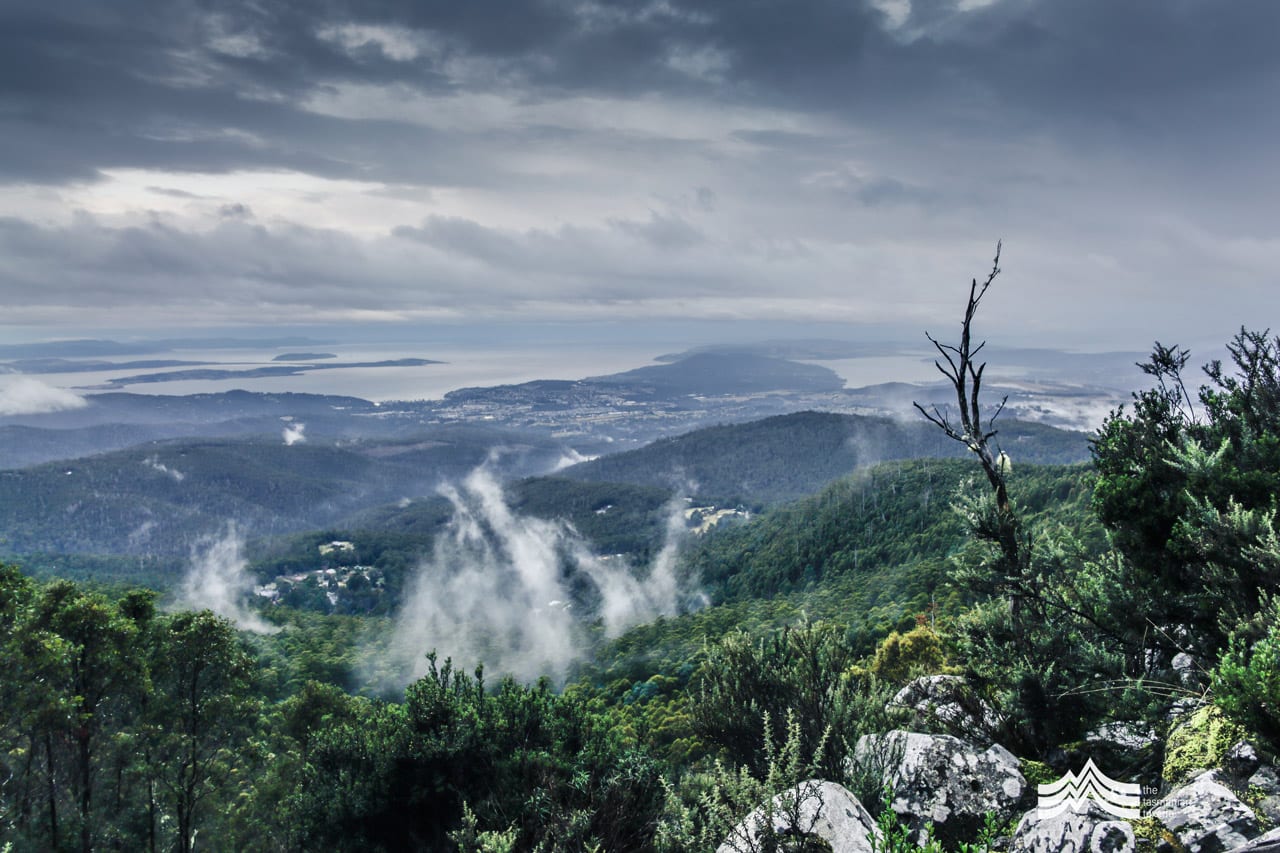 kunanyi/Mount Wellington is currently a hot topic of debate in Tasmania as a proposal to build a cable car on the mountain divides the locals. The arguments in favour of its potential economic value are hard up against strong community passion to protect the integrity of ‘the mountain’. More on that fiery debate later.