#13 Paddock to shed to plate 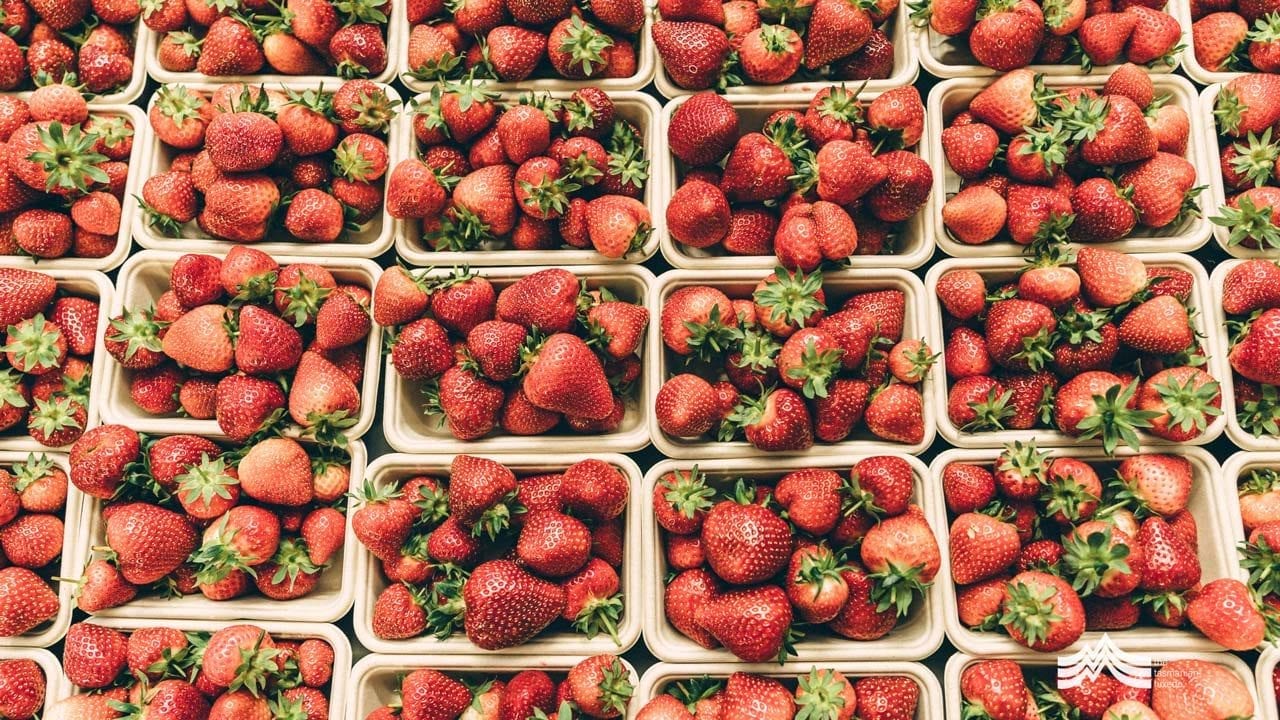 James Peaves was born in 1808. By the age of twenty he found himself both an orphan and a prisoner in Tasmania’s historic Richmond Gaol. Staring down the barrel of a life of hardship, a stroke of luck came his way when a guard carelessly left a ladder leaning against a wall. Seizing the opportunity, Peaves hightailed it up to the Derwent Valley where he acquired a small amount of land, changed his surname to Clark, and found a wife in Alice. The 16 children and 120 grandchildren they went on to have saw the start of a family tradition that continues today.

The Clark family have carved their niche on the land. Sawmillers, butchers, farmers – they’re a robust lot who seize opportunity, treat the valley with respect, and know the value of plain hard work. James and Alice’s great, great, great grandson, Richard, today finds himself surrounded by berries. Strawberries, raspberries, tayberries, silvanberries, boysenberries, josterberries, blackberries, blueberries and blackcurrants. Making a living from the land is in the Clark blood. 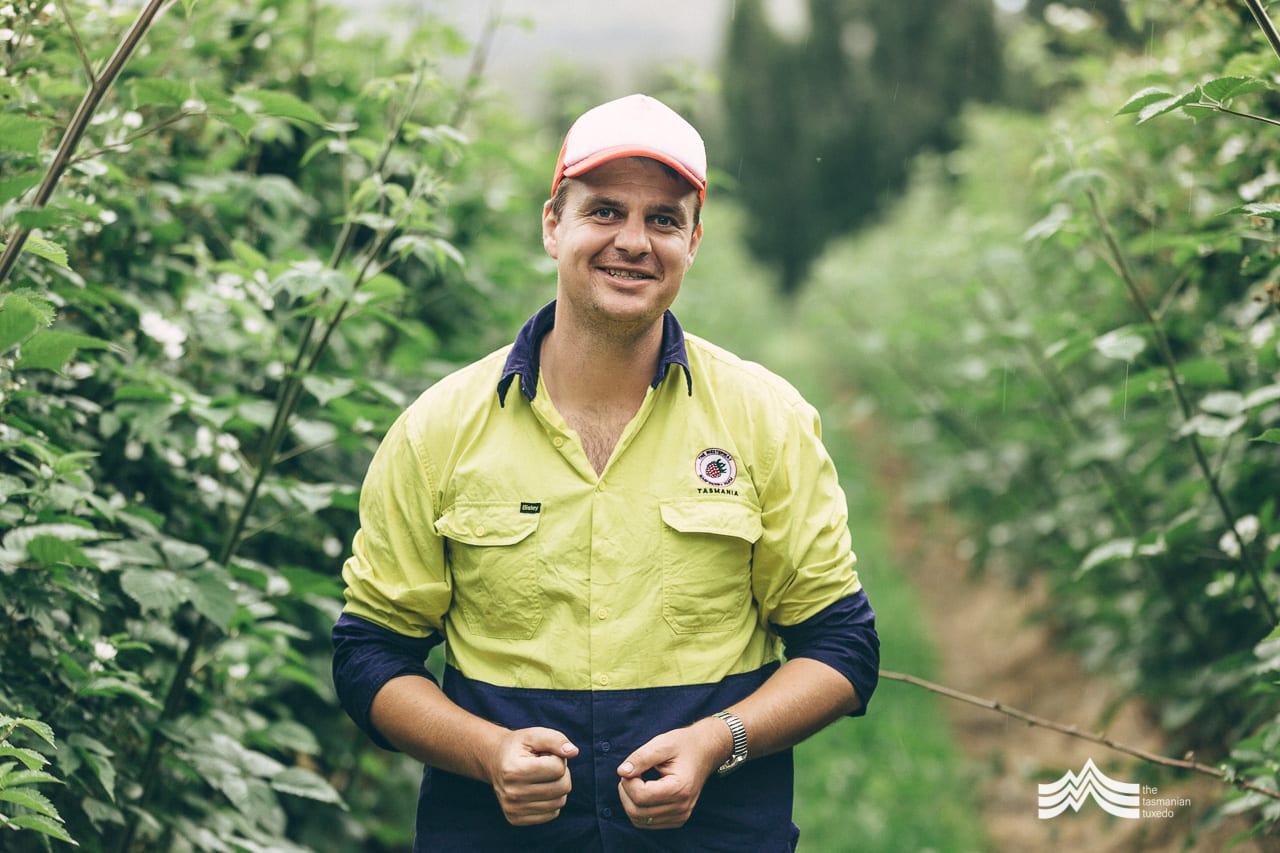 “Our family have been here for generations and have a deep connection with the Derwent Valley,” explains Richard enthusiastically. “James lived until 1908, and we think he may have been the first Tasmanian to live to 100 years of age.” He flashes a warm grin, “We’re a family of strong farmers and good breeders… must be all the fresh air and clean water.”

Richard describes how his grandparents started a berry farm back in the 1970’s. “They had 20 acres back then and started with blackcurrants and raspberries. The farm helped put my dad through uni to study agricultural science.” He goes on to explain how things continued along the same trajectory, “Mum also studied ag science. Together they acquired 50 acres and started sheep farming. They’ve got two and a half thousand acres now and it’s all on the back of their hard work. Dad ended up as head of ag science at UTAS and was totally self-made. He’s a great inspiration.” 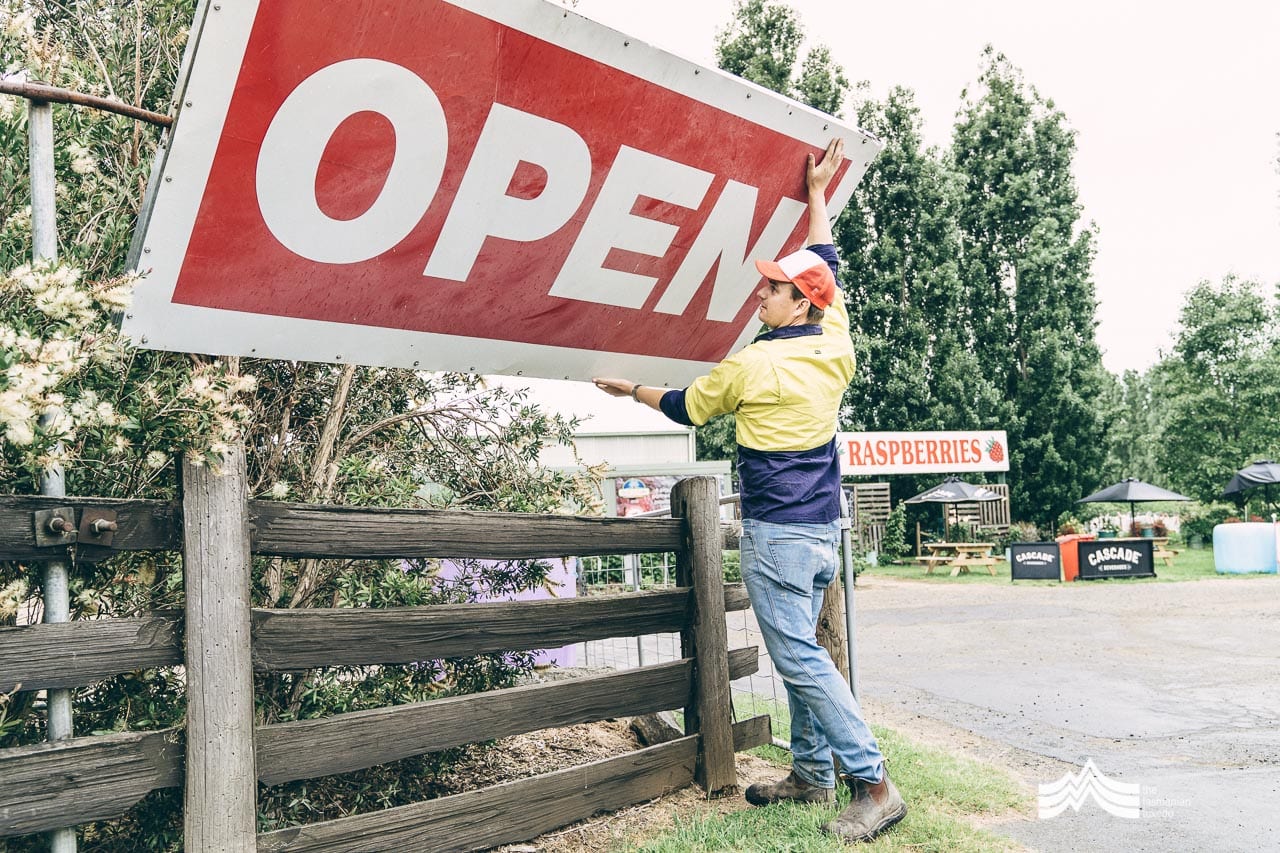 Like all the Clark children, Richard went to the local primary school in Westerway. “All our relatives went there until we had to head into town for high school. I worked on the farm on many weekends and school holidays from the age of 12, and spent a lot of time in the back of the blackcurrant harvester picking bugs and sticks out of the fruit. Like dad, it was the farm that helped pay for my university education too.”

In 1998 Richard’s father decided to try his hand at raspberries to supply Cascade Fruit Syrup. “Raspberries were quite common throughout the Derwent Valley until the 70s and used to be on the scrubby hill paddocks with the blackcurrants. Dad planted a few in river flats along the Tyenna in old hop fields and then bought a new harvester to lower harvesting costs and increase productivity…but the machine didn’t work too well initially so I had to get out there and pick a few by hand. He encouraged me to sell what I could, so I went all over Hobart with my mum driving me about trying to rustle up some business. It wasn’t easy as no one wanted to buy from a young lad, but eventually after being turned down all over the city, I managed to sell 100 punnets to A1 Fruit Market. That sowed the seed that perhaps there was a real business opportunity here for fresh raspberries too.”

“The combination of Dad growing the fruit and me selling it gave birth to the Westerway Raspberry Farm. It’s how we started and it’s pretty much how things still are today.” 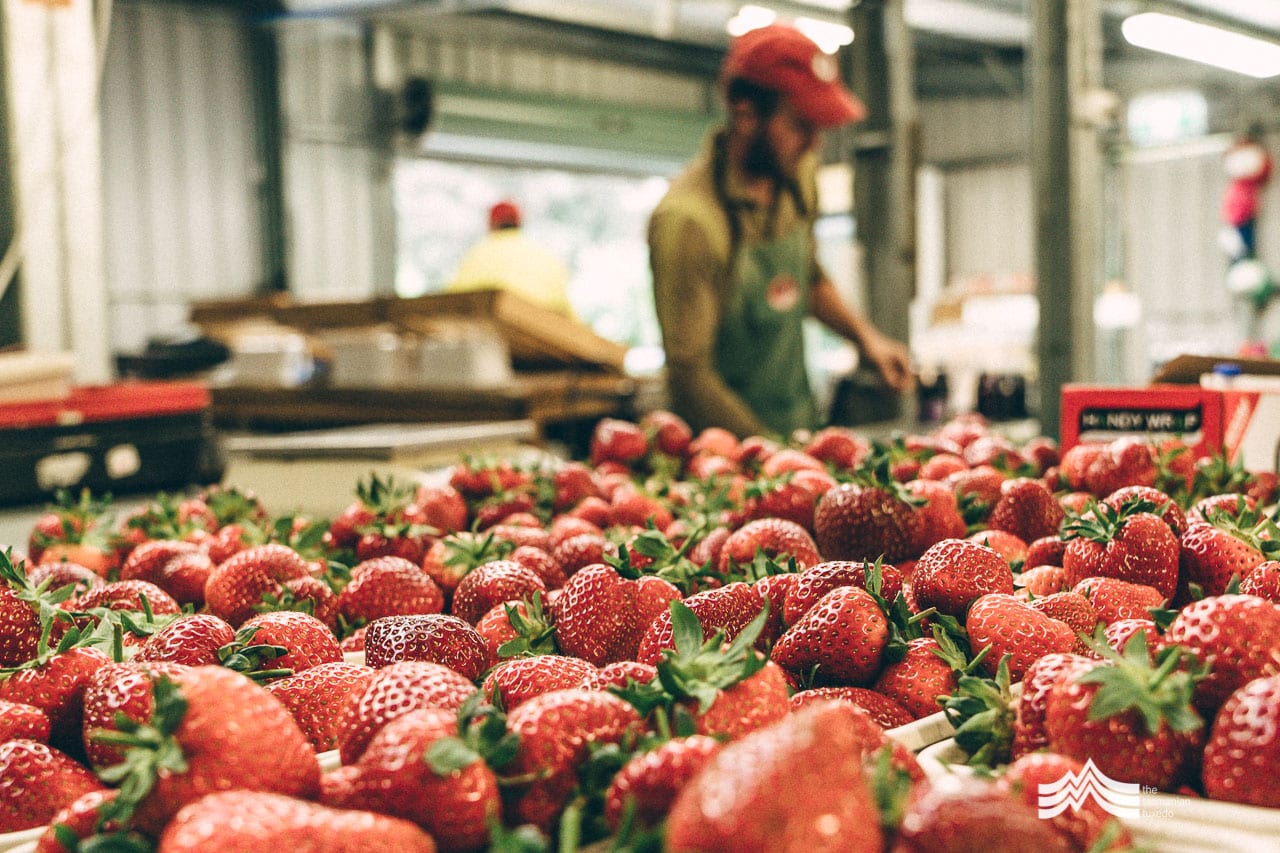 “In a nutshell, Dad’s growing the product and I then buy it from him and prepare it for market. It’s a symbiotic relationship…he needs to on sell his fruit so he needs me, and I obviously need him to source my product. It’s perfect.”

A few years later and with an economics degree under his belt, Richard headed to Sydney to pursue a career at the Reserve Bank of Australia. “I loved the work but I also still returned to Tassie every summer to run the farm. It kept pulling me back…I just love it.” He gazes across the rows of berries before him, “It’s great being outdoors, working with the family, and producing such a high end product.”

Richard returned permanently to run the berry business in 2013. “My business, The Westerway Raspberry Farm now buys 100% of Dad’s fruit, it equates to 250 tonnes each season of locally grown goodness.” Richard continues, “We also buy waste fruit from other farms and process it for Australian manufacturers. We hate seeing anything wasted…even the waste stalks of the strawberries are fed to my brother’s pigs.” He goes on to explain, “If fruit that is not suitable for fresh sale can be repurposed into puree then that’s great. We work closely with local boutique producers to provide them with raw ingredients. It could be for jams, ice cream, ciders, liqueurs… anything really.” 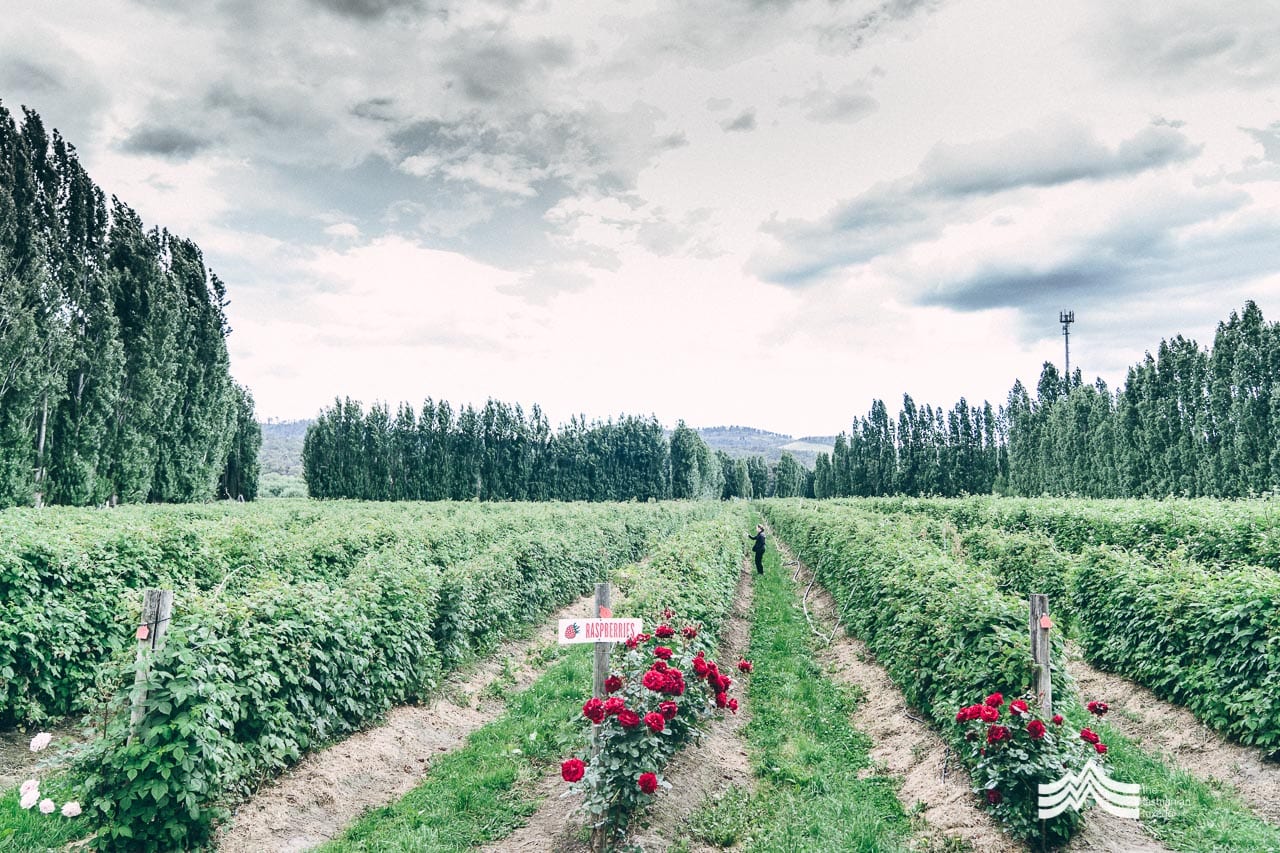 Spend an hour wandering along the berry rows at Westerway and you’ll feel instantly relaxed. Nestled below the ridgelines on the river flats, it’s cool country living at its best. “We’re so lucky here,” says Richard. “We have fresh air straight off the southern ocean and the water from the Tyenna River flows right down here from the national park. You really can’t get much cleaner, and these fertile river plains are ideal for berry production. I think we can claim we produce the freshest berries in the world.” It’s hard to argue with Richard’s claims when the river he’s talking about holds more fish per cubic metre that any other in the Australia and is teeming with platypus. Both are a clear indicator of a healthy freshwater environment.

“The climate is perfect here for what we do,” he continues. “It’s a lot like Kent in the UK or Bavaria in Germany…both are big berry growing regions.” Interestingly, berries need a certain number of winter chilling hours, for example blackcurrants require 800 hours below 5 degrees Celsius in order to flower and subsequently produce fruit. Just as interestingly, the blackcurrant market continues to fall with no sign of a resurgence. 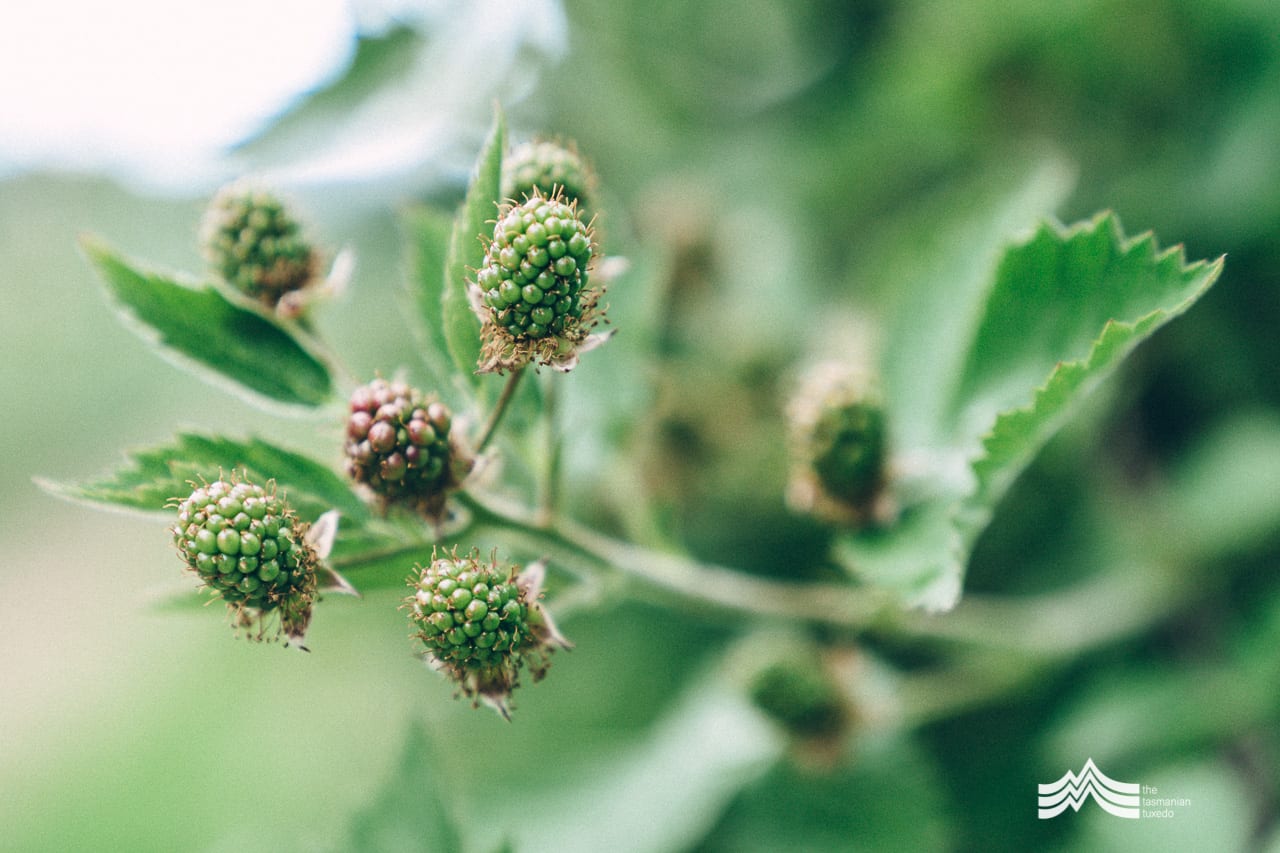 “We’re the last commercial blackcurrant grower left in Australia,” says Richard. “We produce 50 tonnes of blackcurrants a year and they’re all harvested in the same week as that’s when blackcurrant bushes produce fruit – all at the same time.” Richard and his family have tried to reinvigorate the flailing blackcurrant market many times over the years, “It’s a shame the market is not demanding them as they are one of the unsung ‘superfoods’. Blackcurrants have about 50% more antioxidants and anthocyanin’s than blueberries and they’re better again than goji and acai berries. They’re really underrated and deserve to be rediscovered. We produce a freeze dried powder from blackcurrant skins and supply a few businesses who use it for its health benefits… they’re off the chart if you’re looking for something with some amazing health properties.”

In addition to mechanised harvesting equipment, the farm employs over 150 seasonal pickers to help with their crop. “About one third of them are locals, one third are backpackers and one third are new Tasmanians from refugee backgrounds. It’s a great mix and we often have the same people returning season after season. The farm camp ground at Christmas time is one of my favourite places, it’s like the United Nations of berry pickers and everyone celebrates together.” 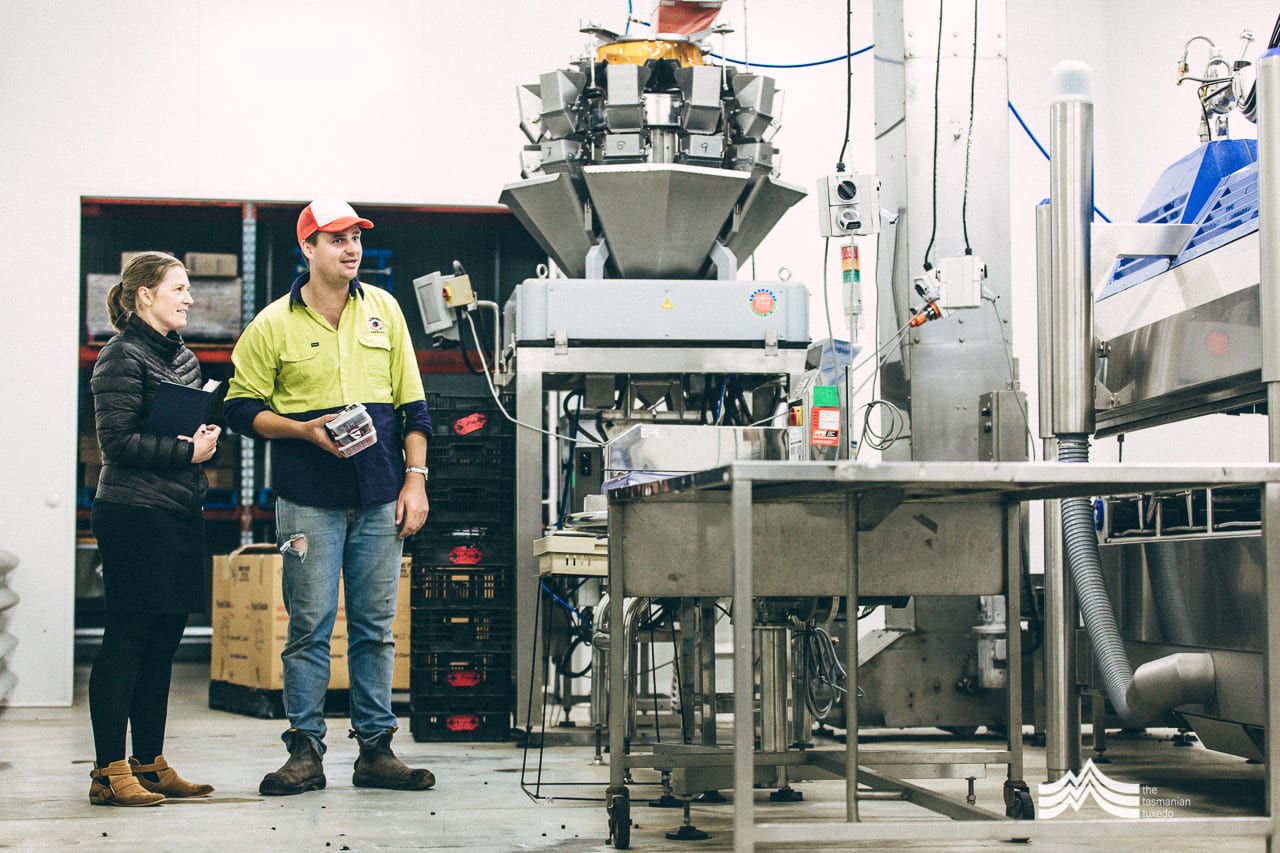 The family have significantly invested into state of the art equipment to process everything on site. “After harvesting we’ll pack the fruit that is being sold fresh, then the rest comes in here to be processed,” explains Richard, gesturing at his impressive processing facility. “It might be being pureed, frozen or turned into powder and freeze dried. We’ve got a pretty sophisticated freezing system here and it allows us to cool the fruit quickly to maintain its flavour.”

You can call into Westerway Raspberry Farm and pick your own fruit straight from the canes and bushes. “Some international visitors can’t believe we allow them into the fields,” explains Richard. “The agri-tourism side of the business has become quite important to us. About 3% of our fruit is sold this way, however it accounts for about 10% of our overall revenue.” He goes on to note the growth in recent years, “We’ve seen 30% growth in this side of the business in the past three years. Tasmania’s really getting a name for its produce now and we are seeing that right here on our farm.”

Speaking of the increase in tourists, Richard says they’re a family run business who embraces the change, “We encourage the trend in getting to know where your food comes from. There are a lot of specialty producers in Tasmania and it’s great to see quality produce becoming valued. We’re seeing a change in the locals too, people understand what fresh and local means and are really starting to seek it out.”

“When you call in here at Westerway, there’s no wall between the shop, the pickers and packers, and the farm. You can experience it all. It’s paddock to shed to plate…and half the time the fruit doesn’t even make it to the plate!”

“Thankfully, change in the market is also seeing consumers realising that fruit comes in all shapes and sizes,” says Richard. “We’re all about ripe, fresh, tasty fruit. A flavoursome fruit is a soft fruit, so we pick at just the right time to maximise that. You need to eat our fruit fast as we don’t produce it to sit on shelves for days and weeks. It’s fresh, high quality and super flavoursome.” Richard’s advice for those hunting out the perfect strawberry is, “It’s best to eat it straight away. And don’t buy on looks, buy on taste. The flavour of strawberries doesn’t improve any further once they’re picked so get straight into them, don’t let them sit around.”

Richard also emphasizes the importance of family to their business. “We have a huge extended family and I don’t think there’s anyone who hasn’t been involved here at some point.” It’s clear he’s proud of the heritage behind this unique Tassie venture. “You can head to the Farm Gate Market and grab some fruit from Aunty Judy or call in during the summer and the kids will be out in the fields helping. I love it.”

Laughing off jokes about the Tasmanian weather, Richard says, “We’re in the rain shadow of Mount Field and it can be a bit schizophrenic here. One day last summer I counted 17 fronts come through. The pickers didn’t know whether to start or stop, but we got it done in the end. You just roll with it, and I don’t imagine it’s too much different from the attitude we would have seen from my great, great, great grandfather.” 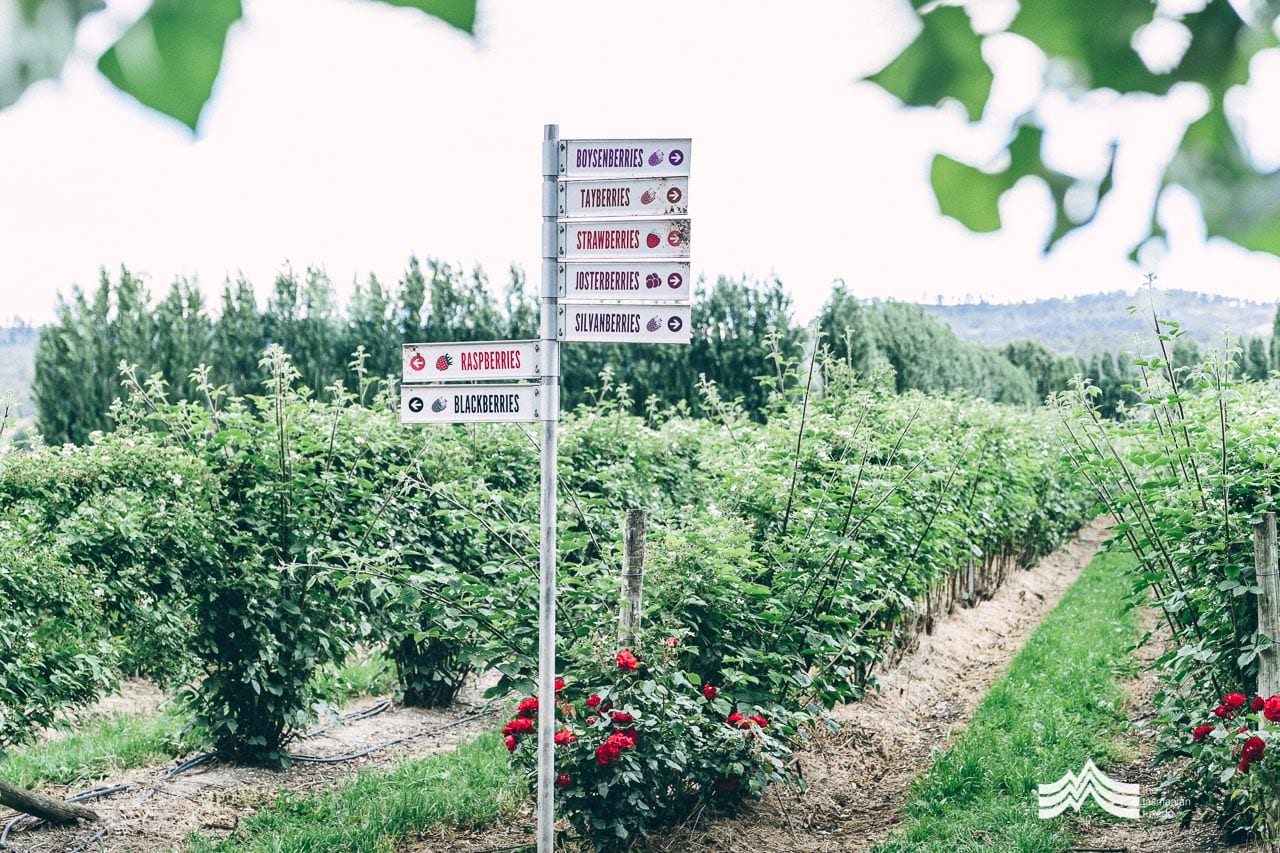 Westerway Raspberry Farm is located one hour north west of Hobart. The best time to visit is between Boxing Day and January 10 when the berries are at their peak. The Farm Gate Shop is open from 9am to 6pm.

It’s easy to keep up to date with what’s ready to be picked via their Facebook page.