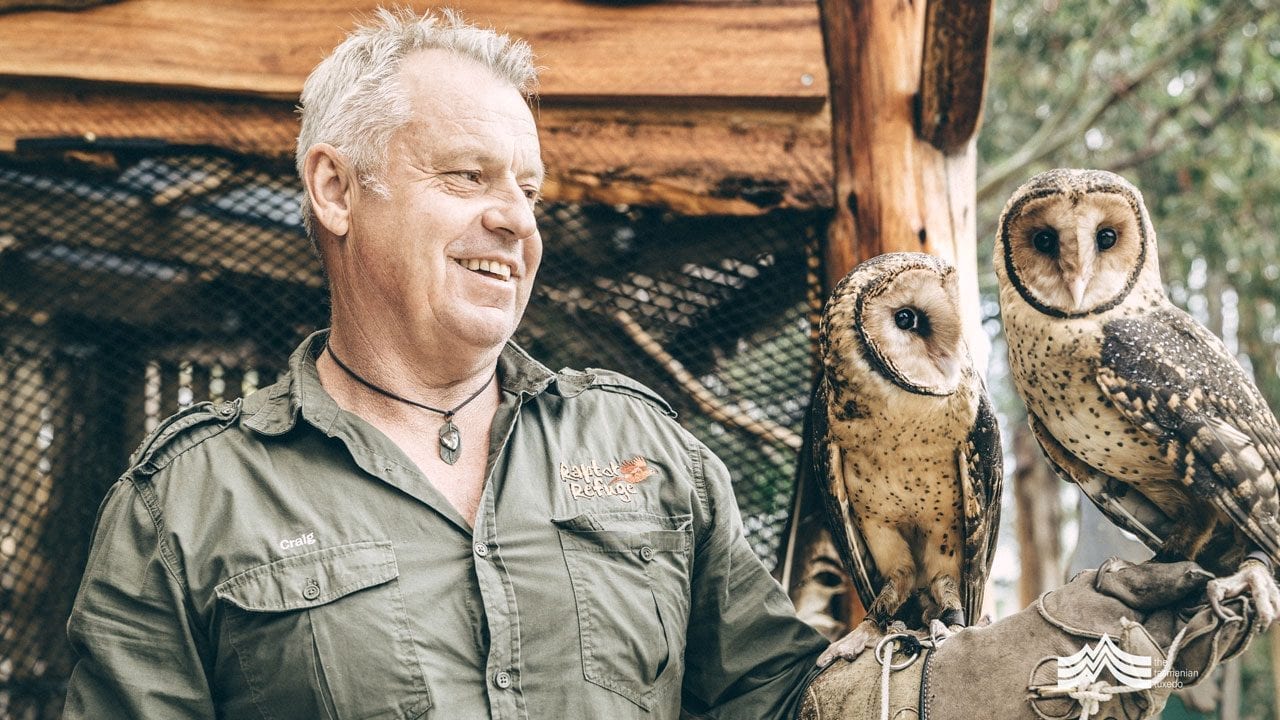 Tucked away on 20 acres overlooking the D’Entrecasteaux Channel, Craig Webb’s labour of love is nothing short of a centre of excellence for Tasmania’s intriguing birds of prey. Whilst one can witness firsthand the silent flight of a masked owl, there’s nothing quiet about the way Craig has been forced to become an advocate for some of our most threatened wildlife.

The Raptor Refuge is carved into a valley thanks to the donations of those who understand the plight of the states 12 different raptor species. “This started as a bare paddock,” says Craig as his eyes scan protectively over the huge aviaries before him. “It evolved out of necessity and passion, and everything on site has been purpose designed and hand built.” 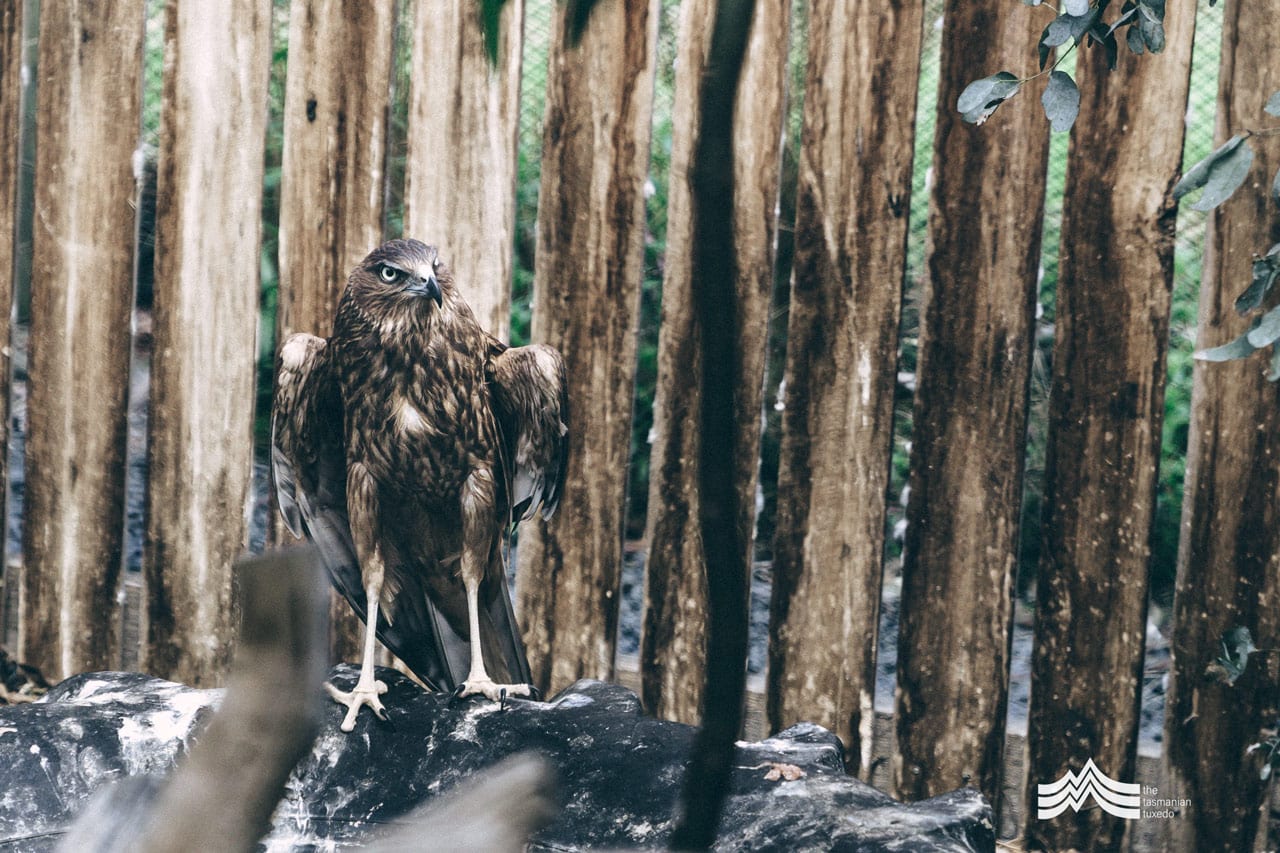 Three distinct features separate raptors from other birds. Talons. Sharp beaks. Excellent eyesight. These morphological differences make them excellent hunters and allow them to feed on relatively large prey when compared to their body size. They can detect food at a distance, effectively grasp and kill it, and complete the deal by tearing the flesh apart. Interestingly, the term raptor is derived from the Latin word rapere, meaning to seize or take by force.

Some of the birds residing at the Raptor Refuge are now here for life. Craig explains, “These guys just wouldn’t survive in the wild…for a whole range of reasons. Many of them are injured and are unable to fly, or have been rescued from bad experiences in captivity. At least we can give them a good quality of life here and know they are well looked after.”

It’s clear that this is Craig’s life. He lives and breathes it. “You get to know all the birds,” he says. “You can have 10 brown falcons lined up, same sex, same age, yet they all have different personalities and colour variations.”

Other birds come in and are able to be rehabilitated and returned to the wild. “They are all individuals,” says Craig. “We’ve found that having cameras on all the aviaries really helps, and for much more than the obvious security reasons.” Craig explains what they discover when watching his charges from afar. “It’s amazing what we’ve learnt. Some birds will mask an injury and this often doesn’t become clear until we can step back and leave them alone.” He goes on to explain, “We even discovered that one bird has a wild visitor that brings her food – it suddenly made sense why she was putting on weight more rapidly than we expected!” 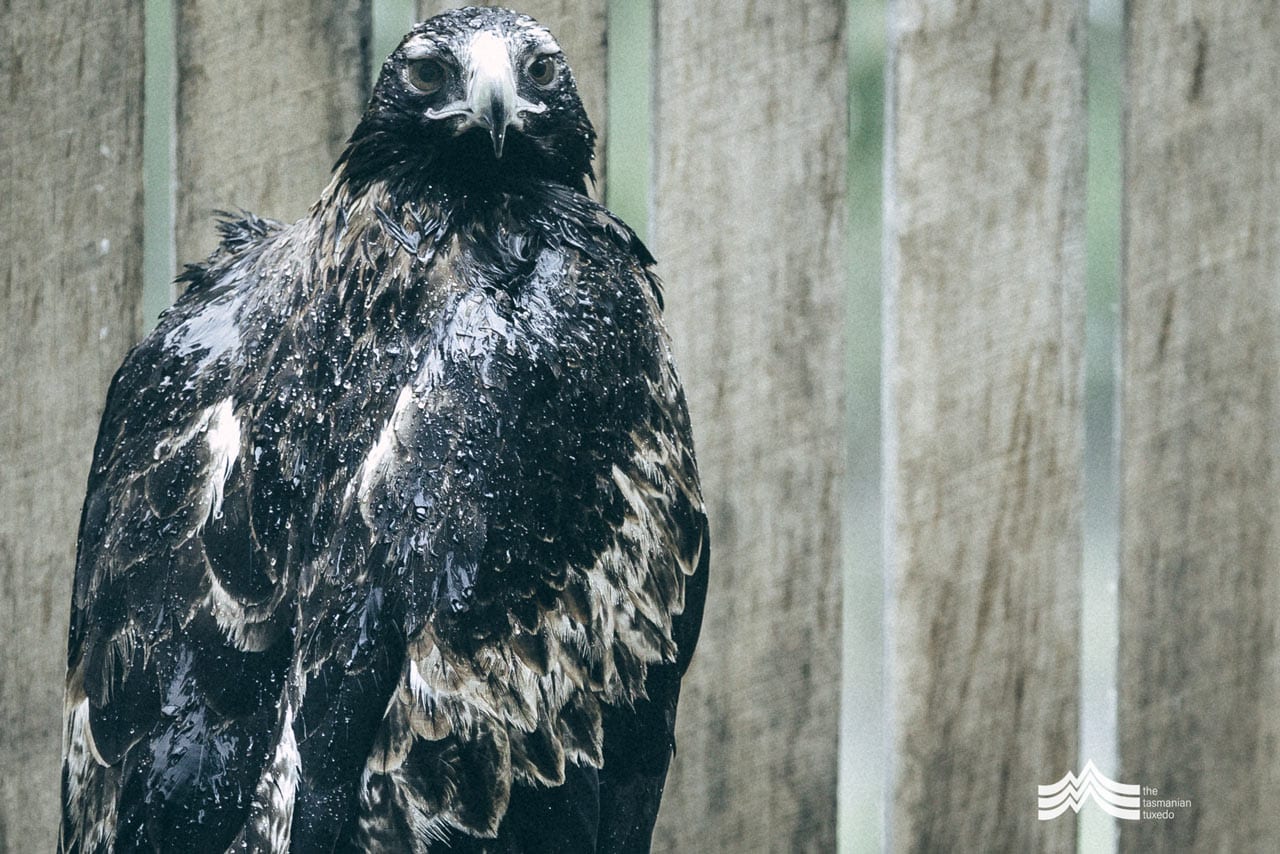 Initially a concreter by trade, Craig brought his knowledge and experience as a vet nurse back to his home state Tasmania some 16 years ago after a decade travelling mainland Australia. “I started off here working with wallabies and kangaroos,” he explains. “But then I gained experience with sea eagles and then other raptors just followed. Like most things, you just have to get in and learn as you go.”

Along with his keen observation skills and sheer determination, Craig’s tradie background has clearly come in handy. “We’ve built everything here ourselves,” he says. “The aviaries are designed to give the birds shelter, but they can also get wet when it rains.” He states very clearly, “We’re not a zoo, not a wildlife park, we’re a working refuge. I make no apologies for putting the birds first.” 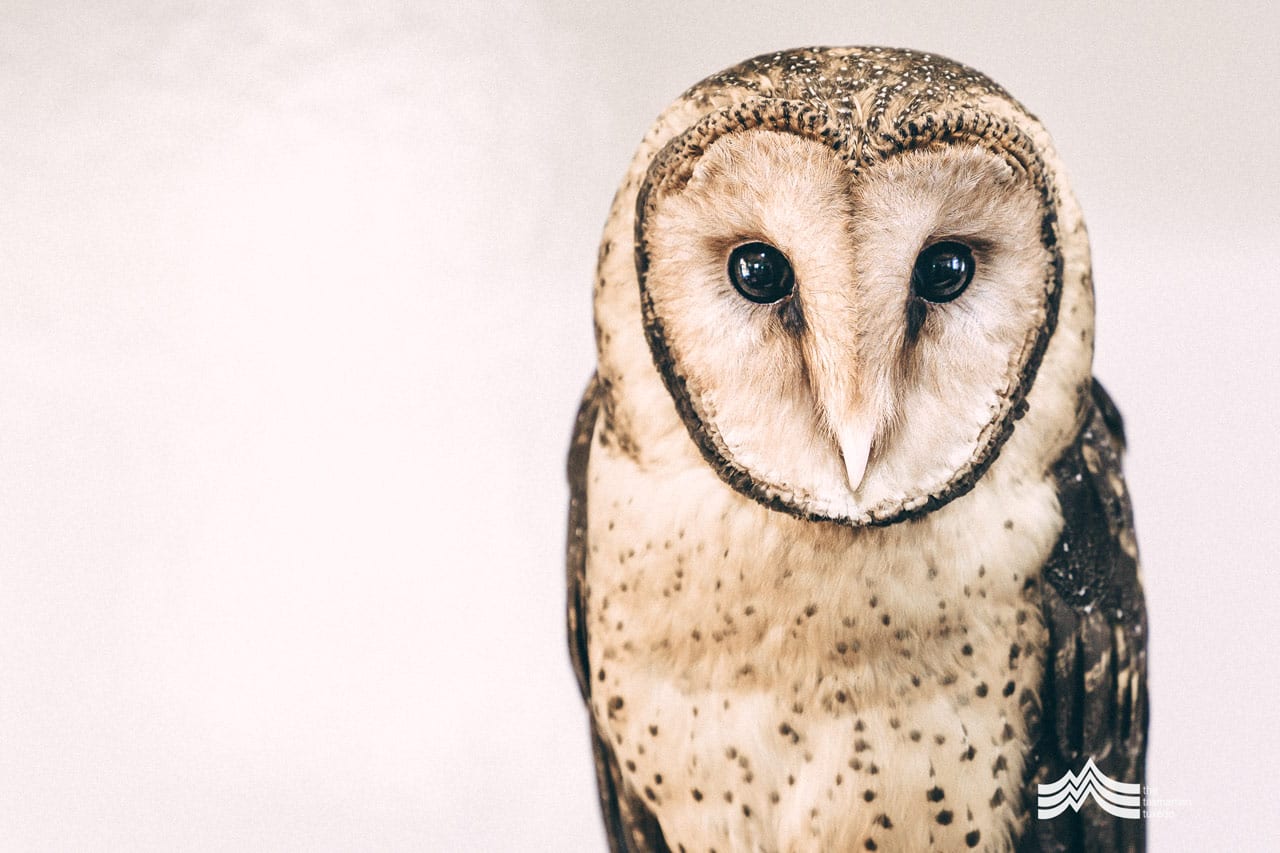 The threats facing Tasmania’s raptors are many and varied, but at the top of the list are power lines, wind farms, collisions with vehicles and persecution (poisoning and shooting). “There’s still a lot of work to do around power lines and wind farms,” states Craig. “But for the everyday local, slowing down when driving at the bush and pasture interface would really help avoid collisions, as would turning down high beams at night. There are still far too many animals injured after being stunned by lights being on high beam…we need to give them time to react and move safely away. Keep in mind that animals feeding on road kill often become victims themselves.”

Craig’s team has constructed an 80m flight tunnel to aid in the rehabilitation process. “The birds can build up their strength and fitness in there,” he explains. “Whilst the hunting instinct never goes away, they do need to build their flight and cardio strength back up after an injury. We need to get them fit for release back into the wild.” 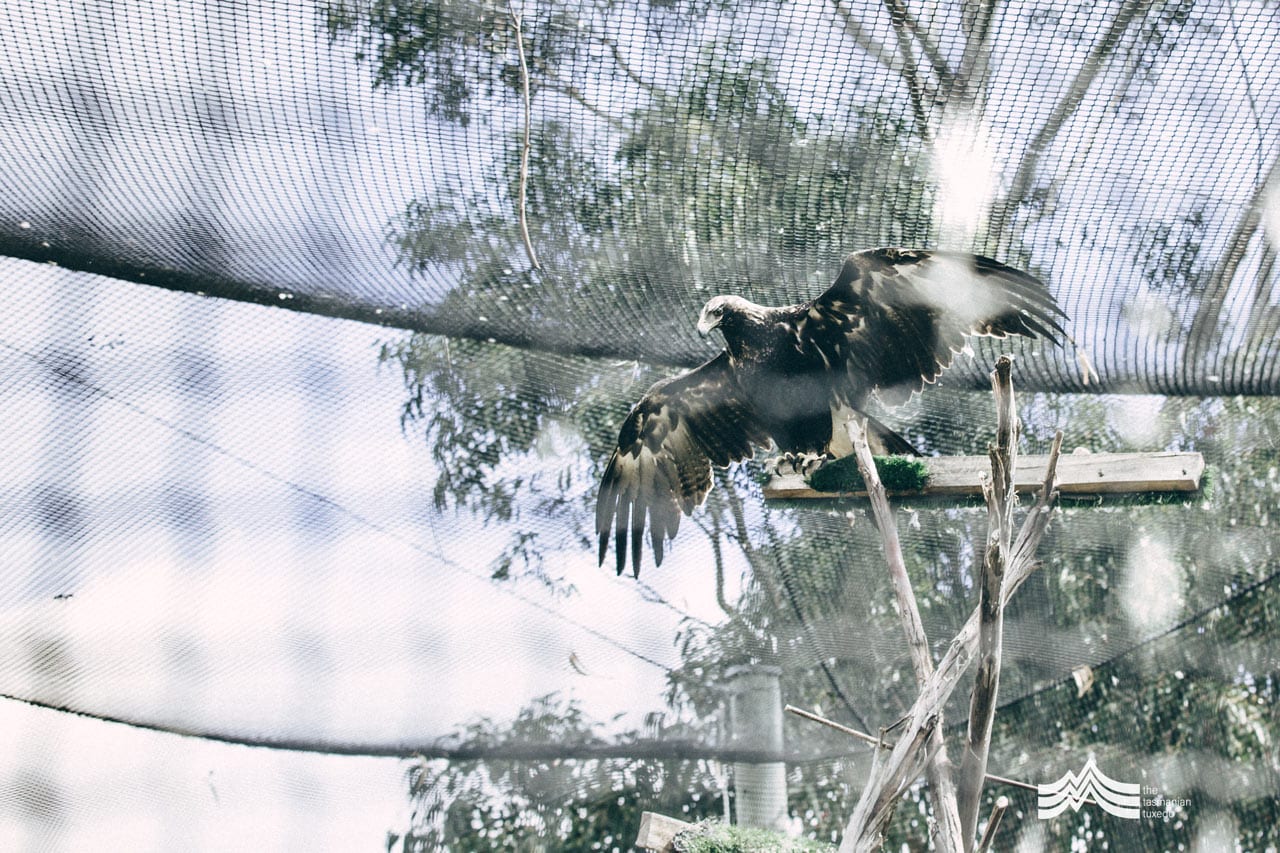 Perhaps best known in Tasmanian raptor circles are the Wedge-tailed Eagle, the White-bellied Sea Eagle and the fastest bird of all, the Peregrine Falcon. They are all represented at the refuge and it’s easy to sit back quietly and marvel at their majestic beauty. It’s just as easy to wish them back to health and have them soaring in the skies once again. Craig currently is caring for an injured sea eagle who sits staring in the direction of the ocean. Heartbreaking.

Interestingly, some of the lesser known raptors that end up in Craig’s care bring the most interesting stories. The Swamp Harrier is Tassie’s only migrating raptor. A large, slim bodied bird with unusually long legs, it crosses Bass Strait to escape the cold Tasmanian winters, returning again in spring to breed. With nests often constructed in farmland, these graceful beauties are frequently at the mercy of tractors. Craig explains that after one particular nest was desecrated by a tractor, the last two remaining eggs were rescued and were raised by hand. Indeed, one was hatched underneath a chook and then went on to find a surrogate mother with another Swamp Harrier.

Each aviary is designed for its inhabitant and reflects its preferred habitat. Indeed, some of the largest raptor flight aviaries in the Southern Hemisphere are found on site. The time, effort and cost in maintaining these outstanding facilities is clearly evident. “We’ve found that artificial turf on the perches helps prevent bumblefoot.” Craig goes on, “It’s a bacterial infection that can become a real issue…to the point of becoming a death sentence. This approach seems to work well for our birds.” 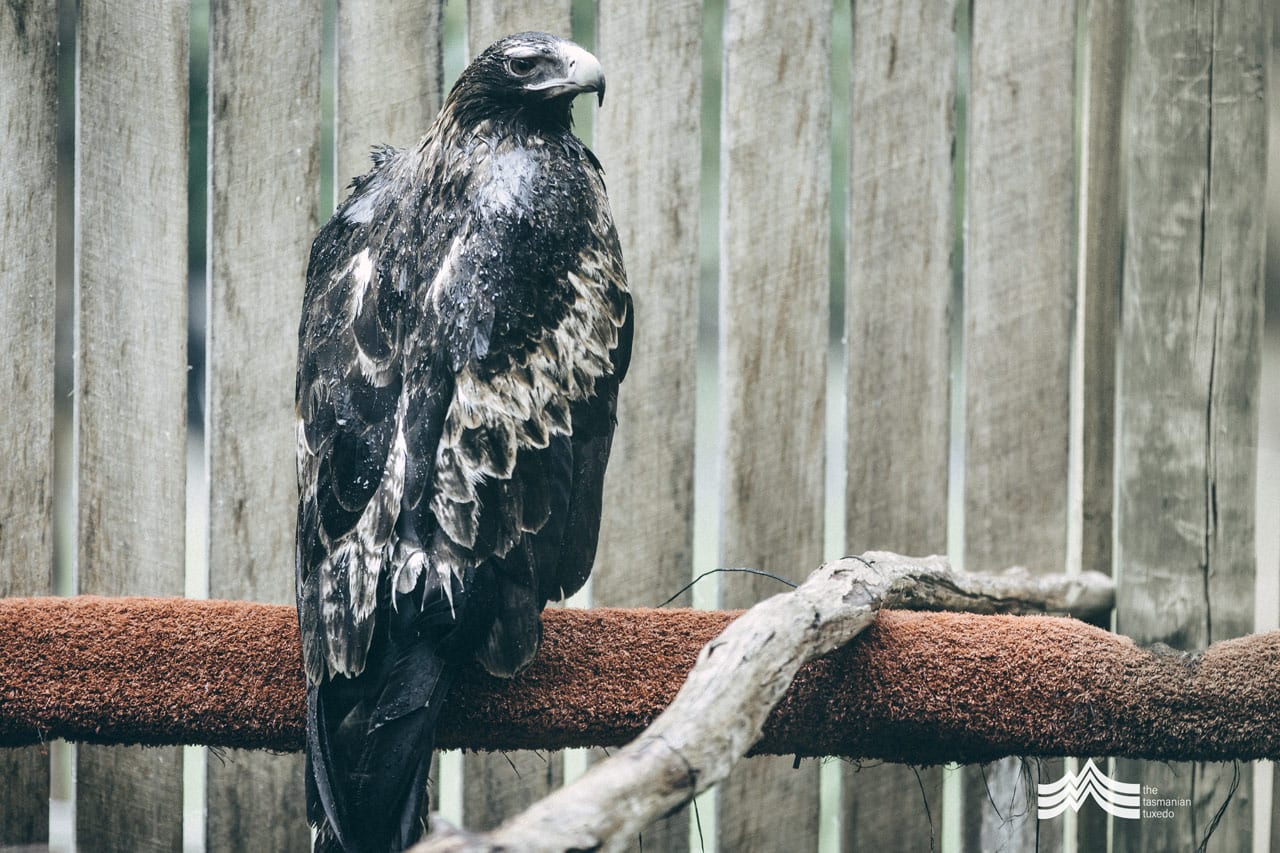 Following successful rehabilitation the release back to the wild is a carefully planned process. “If it’s been a pretty quick process, say a month or so, we can often release the bird back to its original territory,” Craig says. “Any longer than that and its likely another bird would have moved in, so we need to find somewhere else. It’s really important they are released somewhere that will give them the best chance of survival. You could imagine that the first month or so back in the wild is a period of increased stress…we try to give them every possible shot at success.” 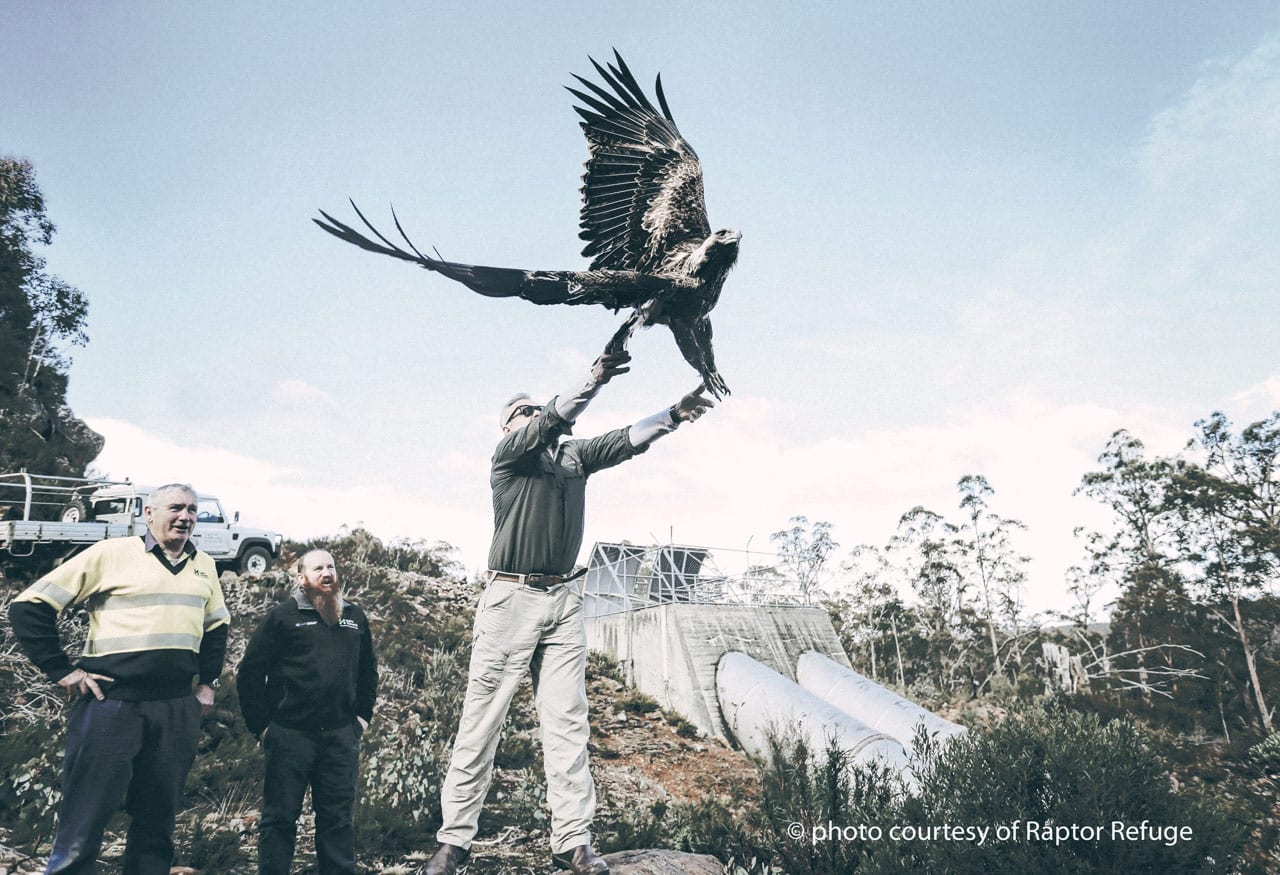 Behind the Raptor Refuge sits a small, hands on board and a group of dedicated volunteers. Once word started to get out about their work and people started wanting to visit, Craig was forced into building a shelter. “I designed the education centre myself,” he says pointing at the impressive octagonal timber structure before him. “Things just kept being added as it was built. A glass turret, an almost prehistoric looking eagle sculpture…it just evolved.” Evolve it did, now being an interactive centre with one way mirrored windows to rehabilitation aviaries, an array of feathers, talons and skulls that visitors can handle and a huge amount of artwork, photography and educational videos to pour over. Artwork and sculptures dotted around the property add another dimension, and reflect the keen eye for ornithological detail held by a number of volunteers.

The centre welcomes guests for private tours, strictly by appointment only and at times that do not interfere with the running of the refuge. “I’m just interested in educating people about these amazing birds,” he says. “The more people that understand the issues here, the more people there are to add to my voice.” 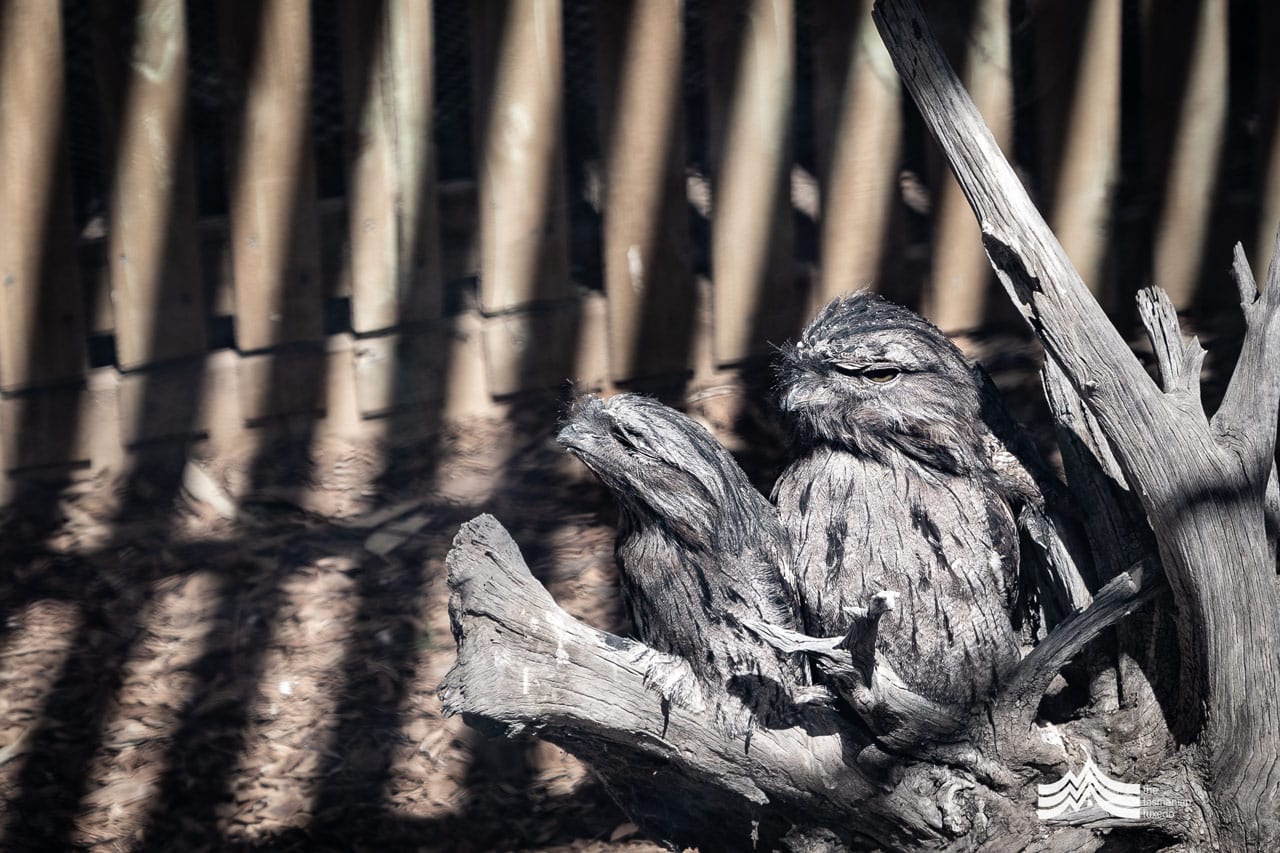 “Unfortunately our work here is not done,” says Craig. “The biggest threats to these birds are power lines and wind farms. In other words, man. I will keep lobbying for further progress… we have to.”

Craig’s lobbying has paid off recently with the Tasmanian Government committing funding for the establishment of a Raptor Hotline, 1800 RAPTOR (1800 727 867). Funding of the service makes it easier for Craig’s team to respond to injured birds as soon as possible. Time is a critical factor when dealing with injuries so all support is welcomed, although as Craig says, “There’s still such a long way to go. This support is just the beginning of more work that needs to be done.”

Look at the figures and you’ll see the predicament. With approximately 120 breeding pairs of Wedge-tailed Eagles remaining in the state, less than 200 pairs of White-bellied Sea Eagles, and only 110 pairs of Grey Goshawks, it’s not hard to understand that Tasmania is fighting a battle to save these remarkable birds. The figures are frightening and it’s time we stood up and lent support to Craig’s work.

With Montgomery perched quietly on his arm intently surveying his every move, Craig says “At the end of the day, this is a place where birds can be safe, happy and have access to excellent health care.” More to his owl than anyone else he finishes, “I just want the best for them.” 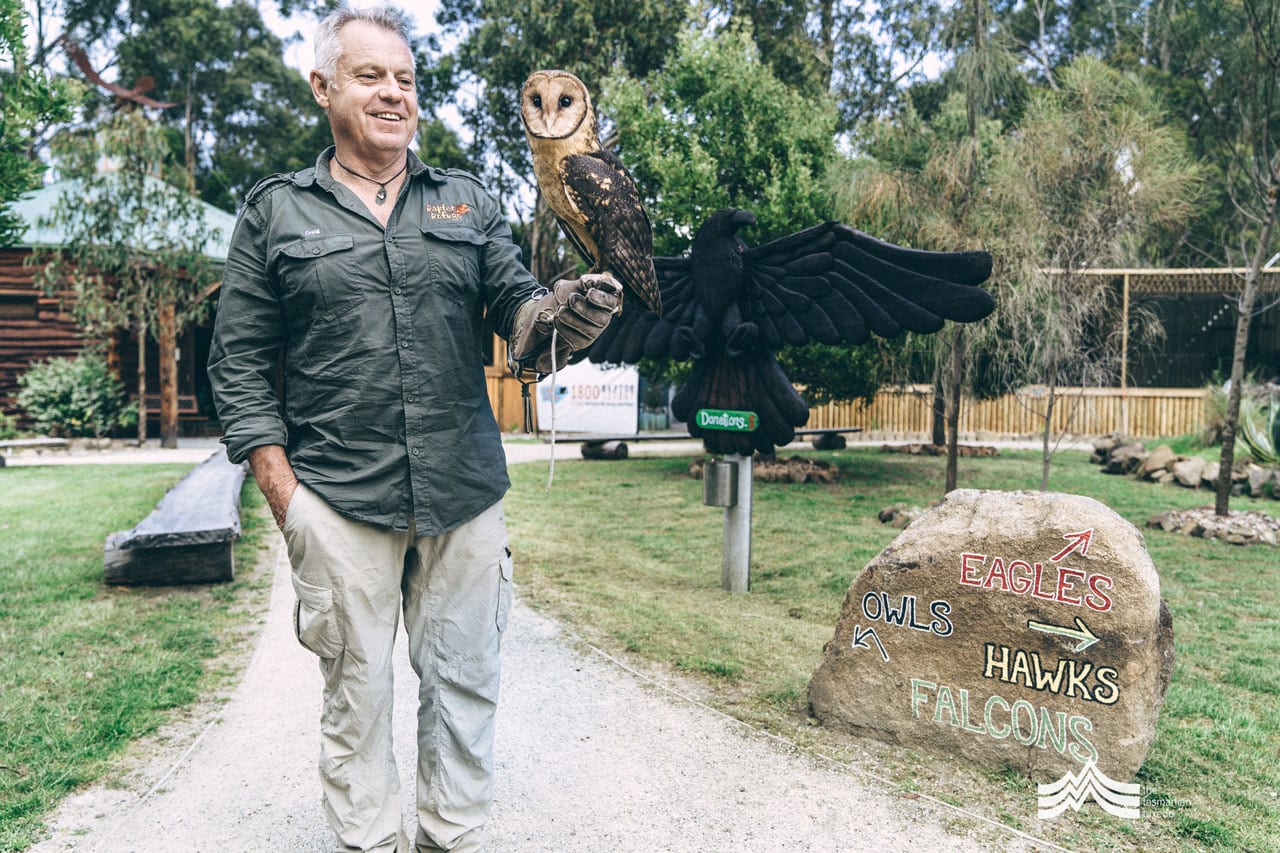 The Raptor Refuge can be visited by appointment only. Book via the website at www.raptorrefuge.com.au, or better yet – jump online and make a donation. It’s easy to become part of the solution to help these beautiful birds to soar again.