#8 Secrets from the ocean 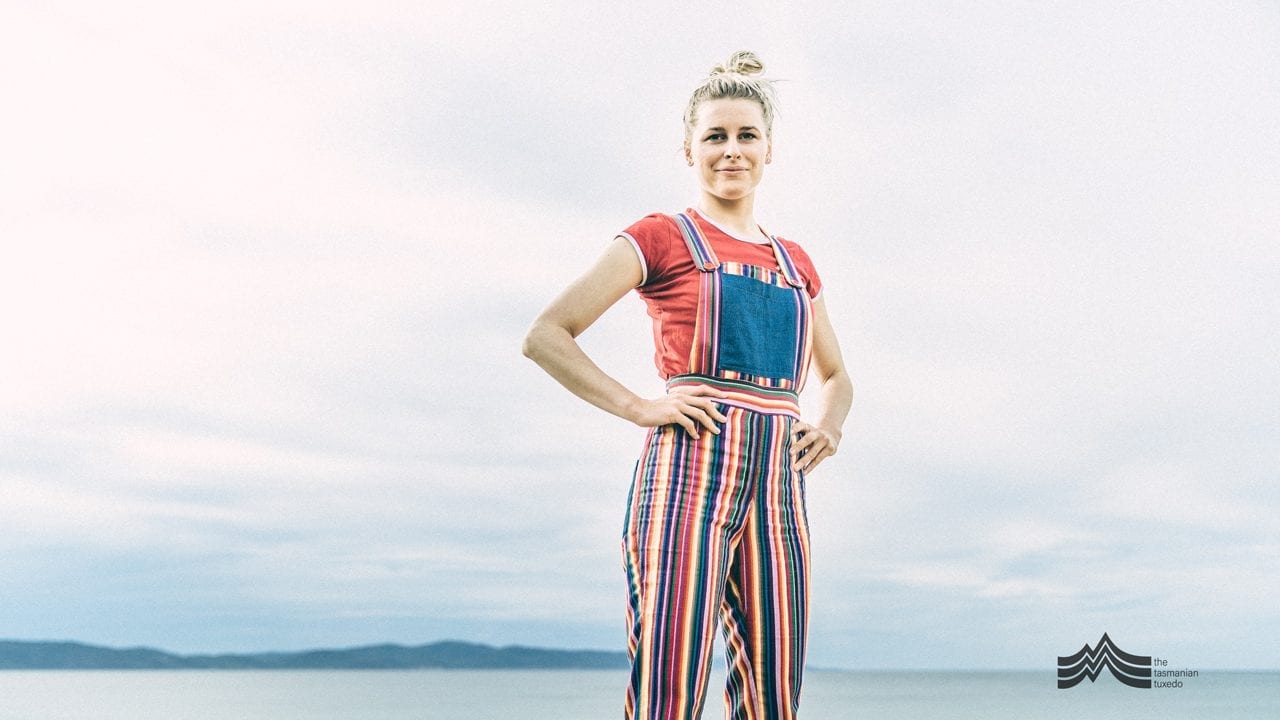 The deep blue will always play a pivotal role in Brooke Mason’s life. It’s long been her place of freedom, solitude and acceptance, but a chance moment in 2015 turned it into her place of grief, fear and doubt. Out in the lonely surf off the coast of Tasmania, Brooke has had to overcome the demons that threatened to take away the very thing she turned to in her darkest hours.

Born in Perth into a quintessential beach lifestyle, Brooke explains how she ended up a Tassie girl. “Dad took us on a trip when I was little and instantly fell in love with the place.” She laughs as she recalls the story, “Basically we stayed for a year and ended up moving here.” 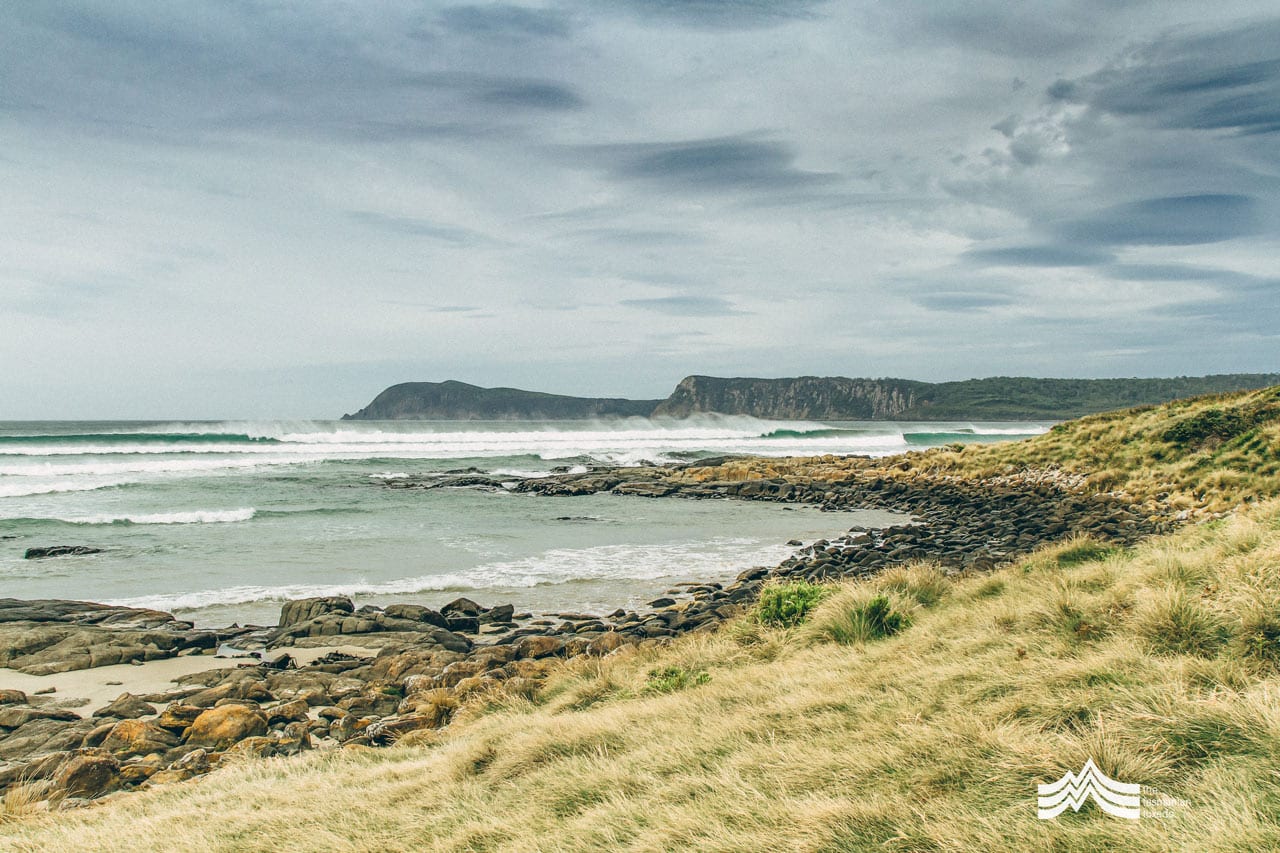 As a young girl Brooke was anything but a keen sportswoman. “I was a pretty weedy kid, no good at sport in general. I even went to my first day of Kinder in a pram – that’s how much I hated exercise,” she grins. “But I was lucky enough to come across a great teacher at school who really turned me around. It started with a love of tee ball, and I can now see how sport really helped develop my self-confidence.”

The young Brooke found her groove and spent much of her primary school years playing high level soccer and doing well at competitive gymnastics. However this young girl from the west, raised on surf and sand, was keen to transfer her skills to the local Tassie beaches. “I joined the local surf club straight away. I wasn’t all that good and I didn’t like the structure and timeframes, but I met a local surfing instructor and got right into taking surf lessons – I loved it,” Brooke confesses. “In the end I was only going to Nippers at the surf club because it meant I could fit in a surfing lesson afterwards.”

“I love the freedom of surfing,” she continues. “There are no time limits, you can push yourself as much as you want, and it doesn’t really matter who you are or how good you are.” Brooke also reveals she found solace in the surf community. “I was instantly drawn to the culture,” she says. “This group of people were individuals. They were loud, they loved life and they made the most of it. I liked that and it gave me the confidence to be myself.” 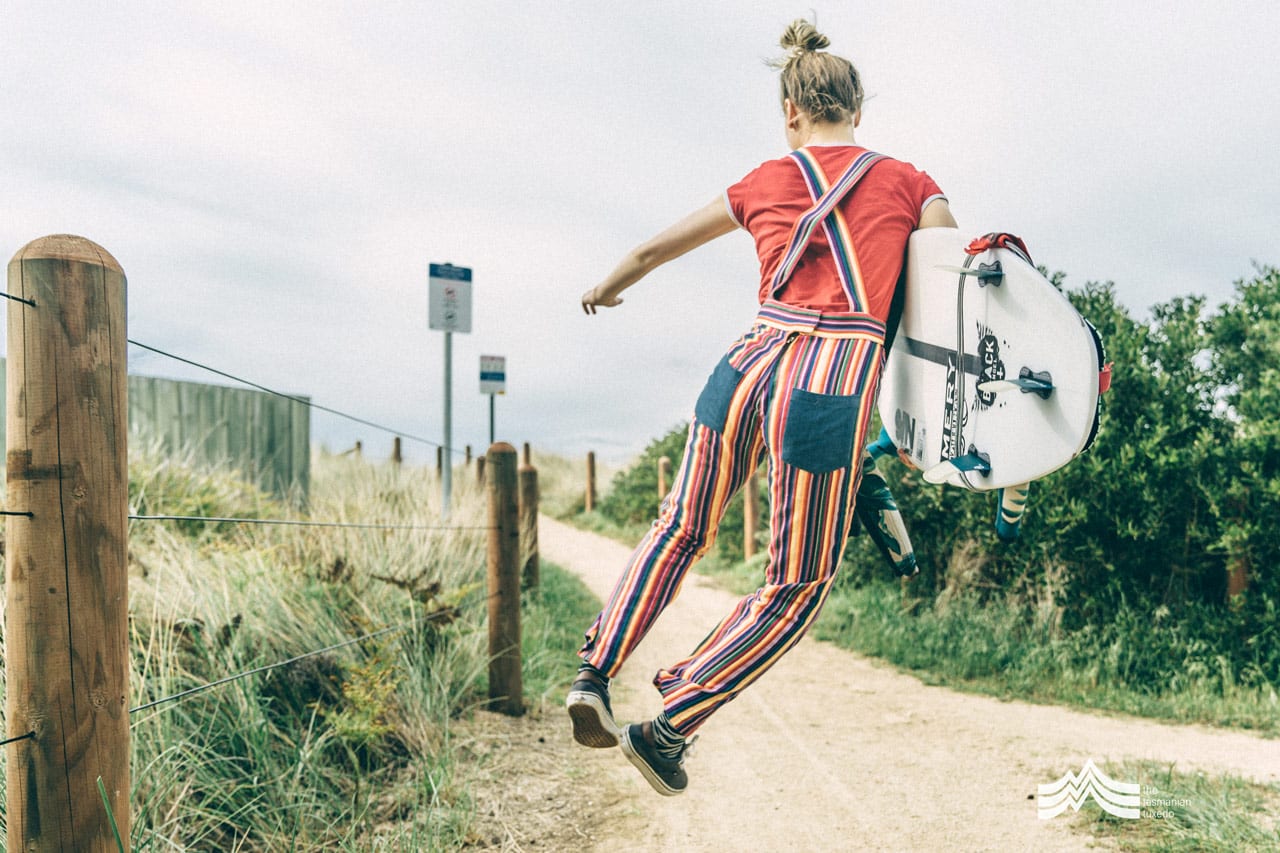 Brooke considers her Tasmanian experience a gift. “You’re an adventurer if you surf in Tassie. You get to see things and go places that no one else does. It’s pretty special,” she says. “I’d pack some corn thins and some soup and off I’d go for the day. When I’d come back to town I’d often look at everyone rushing around after work and think that those guys just don’t know what’s out there…they don’t know what they’re missing.”

“Tassie was the best place for some epic road trips,” Brooke babbles. “Dad would pack up the car and we’d have some awesome surf and camping trips. I loved it.”

It’s hard to believe that this bubbly and outspoken young woman has ever doubted herself. She casts a carefree air over those she meets and easily falls into conversation with those twice her age. “But I really struggled when I was younger,” maintains Brooke. “I suffered from bad eczema and I didn’t really grow until I hit 16. Things would get me pretty down. I’m grateful I found sport…it really gave me what I needed.” 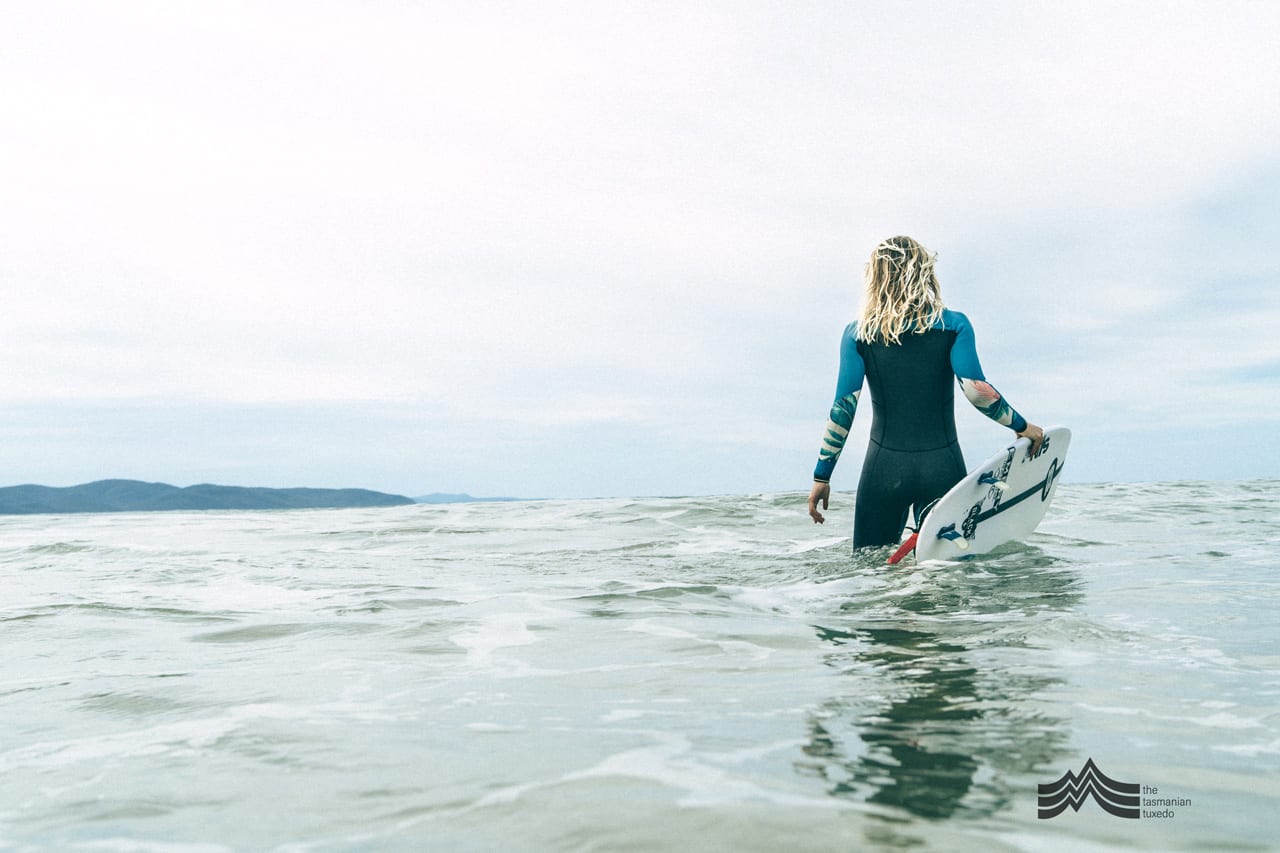 Brooke tells of her relentless drive to get to the surf, “I’d have to take two buses with my surfboard, and I’d often get kicked off. Bus drivers and old ladies hated me. In the end I worked out it was just easier to leave my board with a mate and spare myself the icy glares.”

In between waves, Brooke also found a passion writing, spending hours at high school crafting stories. One of those true stories ended up winning her ABC’s Heywire competition – an annual project putting regional stories on the map. Ironically her tale was laced in humour surrounding a surf trip that landed her in hospital, not from the strenuous injuries one might expect, but from scalding third degree burns received from a spilt bowl of two minute noodles. “Everyone loves that story,” laughs Brooke. “When you think what could happen surfing somewhere as crazy as Boneyards, the noodles are pretty funny.”

Brooke and her Heywire counterparts found a common interest in positive body image and self-worth and set about founding ‘Fresh Faced Friday’. “It’s a simple concept that’s been making a difference to young people” says Brooke. “It’s about creating a day to celebrate who we are as individuals. FFF is about tearing up the negative and celebrating the positive. We all need that.” 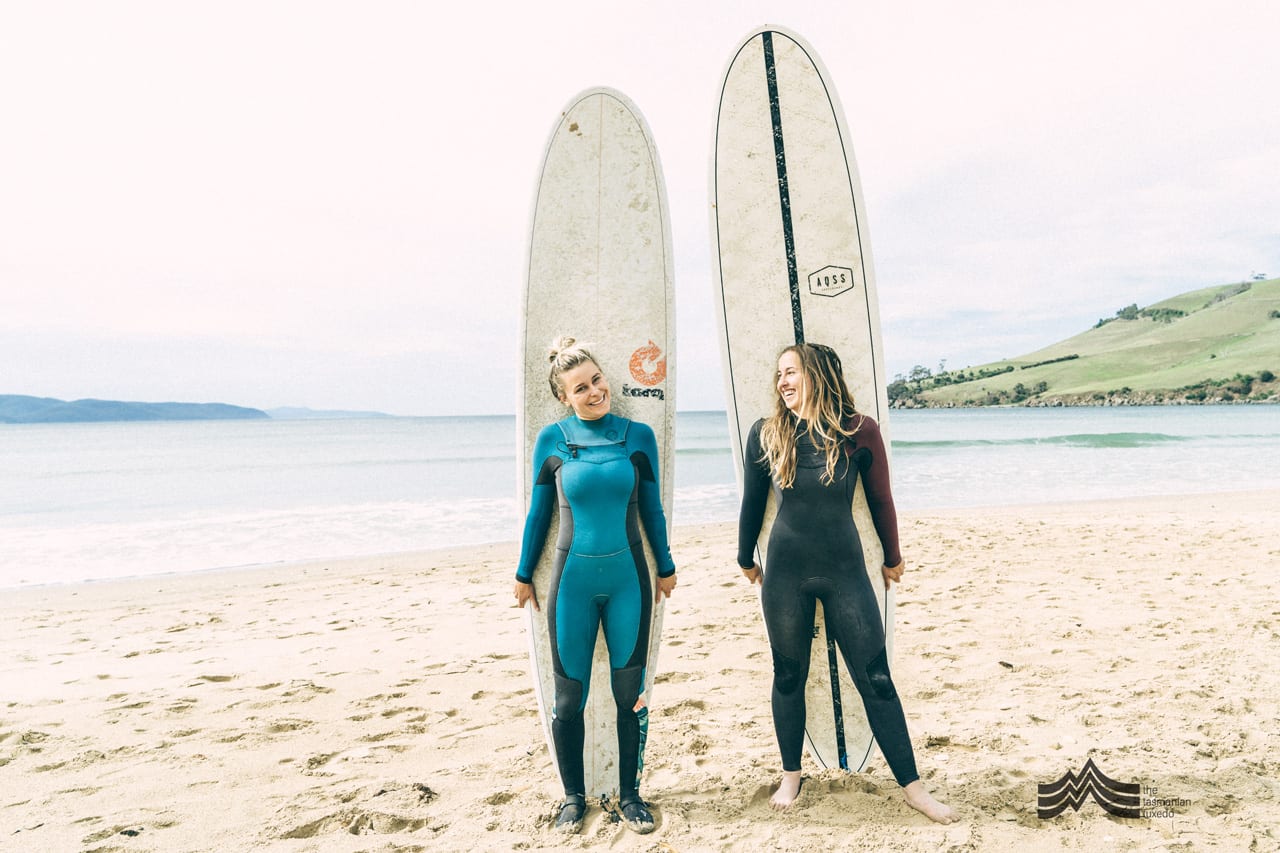 Brooke herself had experienced the pull of negative body image during her time at an all-girls school, “I’ve lived it with my school mates,” she sighs. “Girls can be so critical and down on themselves. I’m ready to see a world where everyone is comfortable in their own skin.”

In 2013 and with a rough framework for her future laid out, Brooke headed off to UTAS to study medicine. Describing the experience she says, “I struggled a lot in that first 12 months and didn’t really fit in. Everyone was really together and had a clear sense of direction, and I didn’t. I pleaded to have a year off and then headed up the east coast of Australia to escape. Right then, I knew I needed to be somewhere else.” 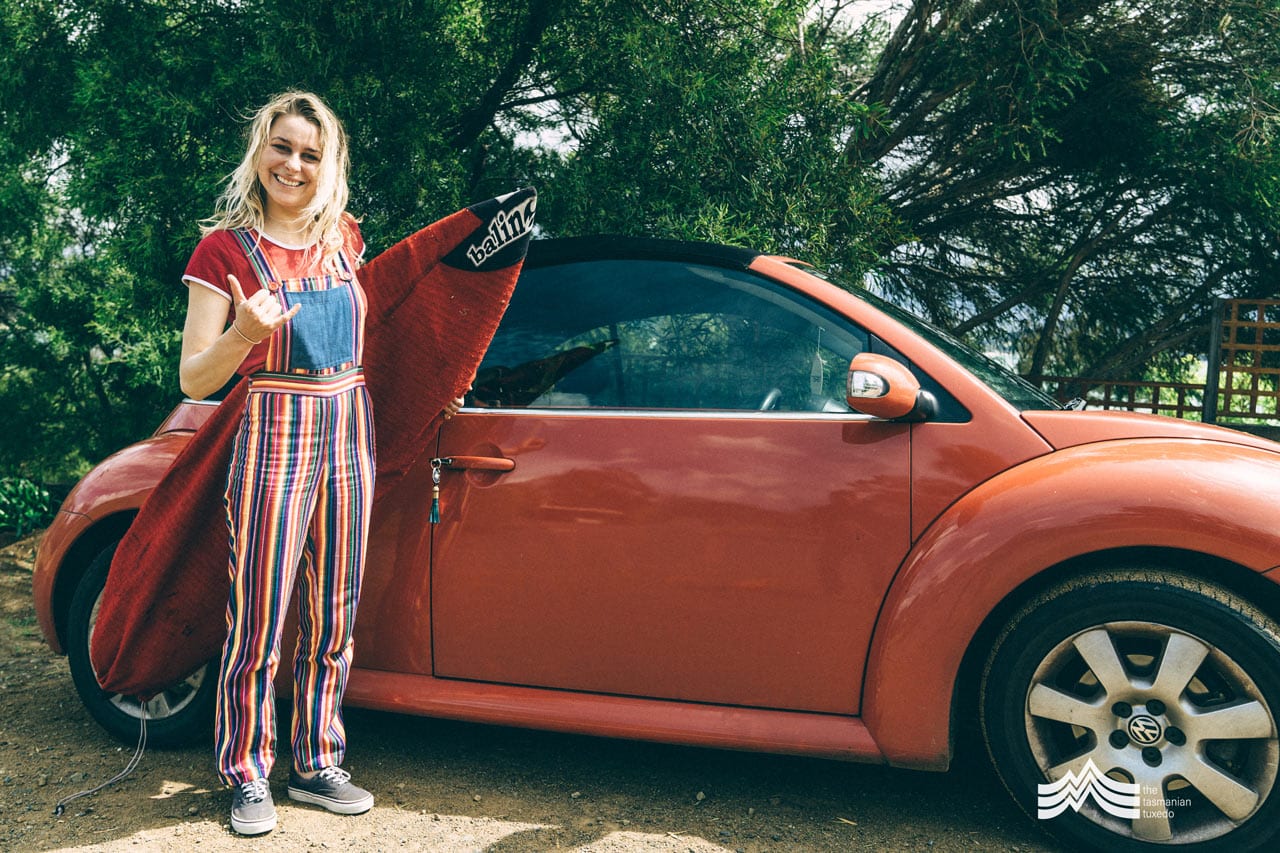 Brooke recalls that time fondly, “I basically lived in a garage and cleaned a house for a bunch of surfers in Byron in return for free rent. I’ve always turned to the ocean in times of stress – it’s the best way to get away from everything and clear my head. Makes you realise what’s really important.” Brooke pauses for a moment and smiles, “That was a good time.”

The good times quickly turned dark during a morning surf. “It was my first experience with death” Brooke says openly. “I was sitting out the back with Tadashi and we had been chatting. I saw him move suddenly and take a deep breath, and just assumed he’d dived under. He’d only been about 10 metres away from me.” Brooke soon realised what had happened when the water around her turned red.

“That time was really difficult for me as I’d always turned to surfing to cope with stress,” says Brooke. “In this instance the ocean was the stress…that’s where the threat was. So I basically spent a lot of time in my garage, thinking – about his death, about how it could have easily been me and about how I reacted at the time.”

Brooke describes the next few months as challenging. She suffered from repeated flashbacks and was constantly questioning her reactions. Even though she got back in the water within a week of the attack, Brooke says it took a long time to work through her fear, “I jumped at every ripple and every movement, and not just in the water – anywhere. I’d be driving and a sudden movement would shake me. I was also sensitive to blood and water. Once I got a nosebleed in the shower and it totally freaked me out.” 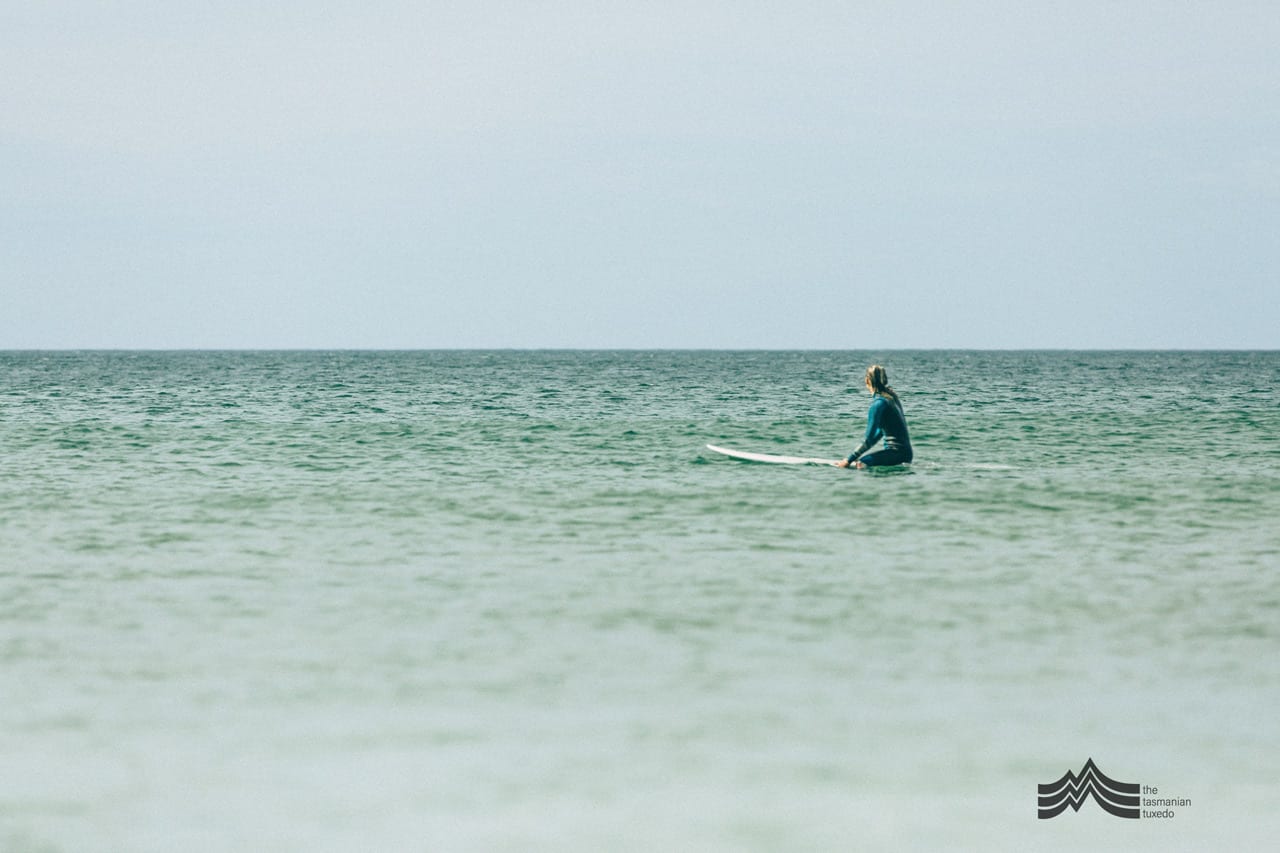 “My main fear was going under the water. I was scared even in the calmest of bays. For a while, I really thought it meant the end of surfing for me.”

Returning to family in Tassie, Brooke was hit with a double whammy. “When I got back I found out mum had been diagnosed with breast cancer. That was really hard, it shook me. It’s another one of those things that effects so many people but you just think it will never happen to you. Well, guess what, it does.”

Brooke speaks fondly of her mum and how the experience shaped her. “I used to be so gung-ho and independent. Now you’re more likely to find me at a yoga class with my mum,” she giggles. “I just like hanging out with her. Both my parents have given me so much…they’re awesome, and when things like that happen it makes you realise just how much they mean to you.” 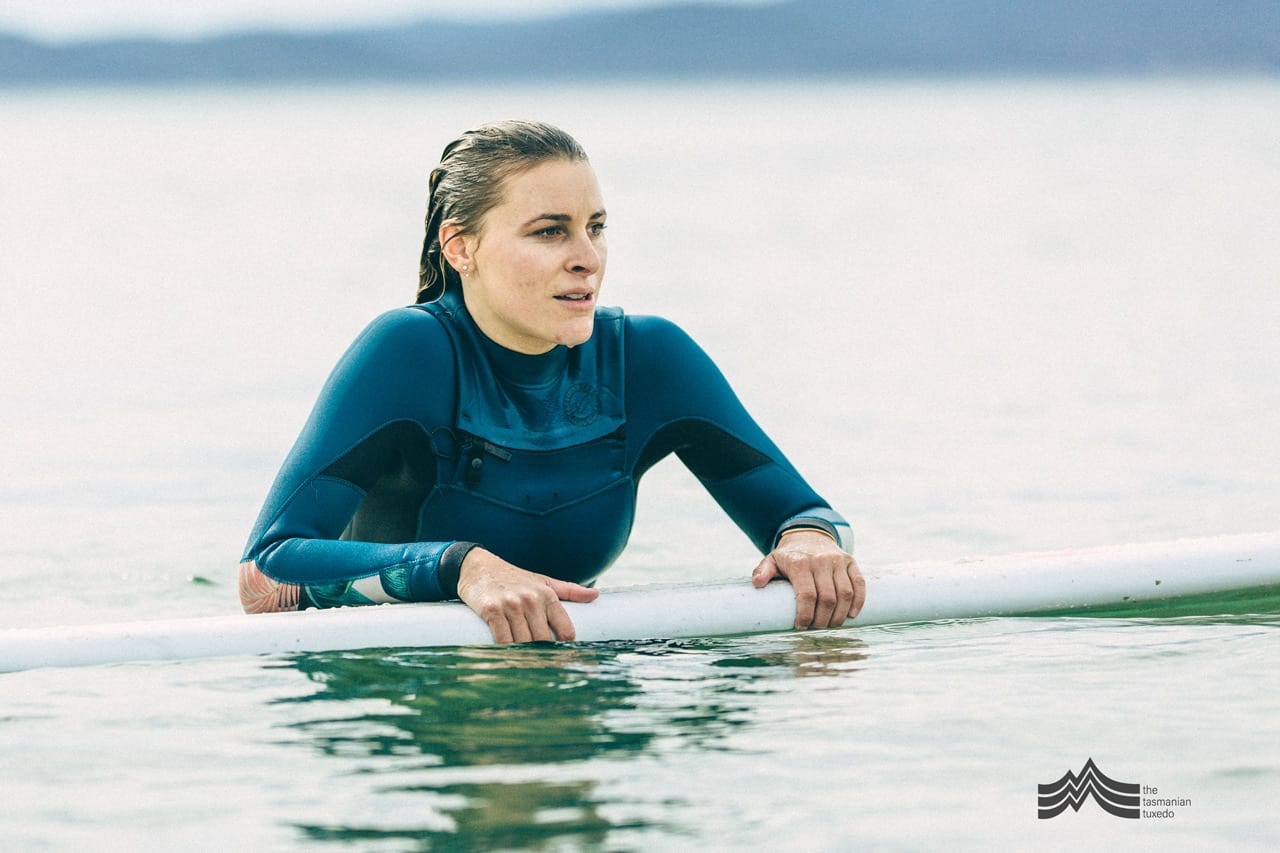 At about the same time, Brooke took off for her first surf back in Tasmanian waters. She’d headed to Nubeena, a popular local spot on the Tasmanian peninsula. “You wouldn’t believe it,” she says when describing that day. “There was a shark in the water. I’d just gotten in and a guy paddled towards me ashen-faced and said he’d seen a shark. I was so shaken I didn’t know what to do. I just sat out there and cried for a while.”

Making the decision to head back to uni in Hobart and complete what she started with medicine, Brooke feels lucky to have connected with one of her lecturers. “We’d just started studying psychology and we had a really out-of-the-box lecturer. He was quite eccentric, smoked and swore a lot. I just knew I had to get to know him better,” she grins. “He ended up helping me a lot. I worked through my post-traumatic stress and he gave me some great coping strategies.” 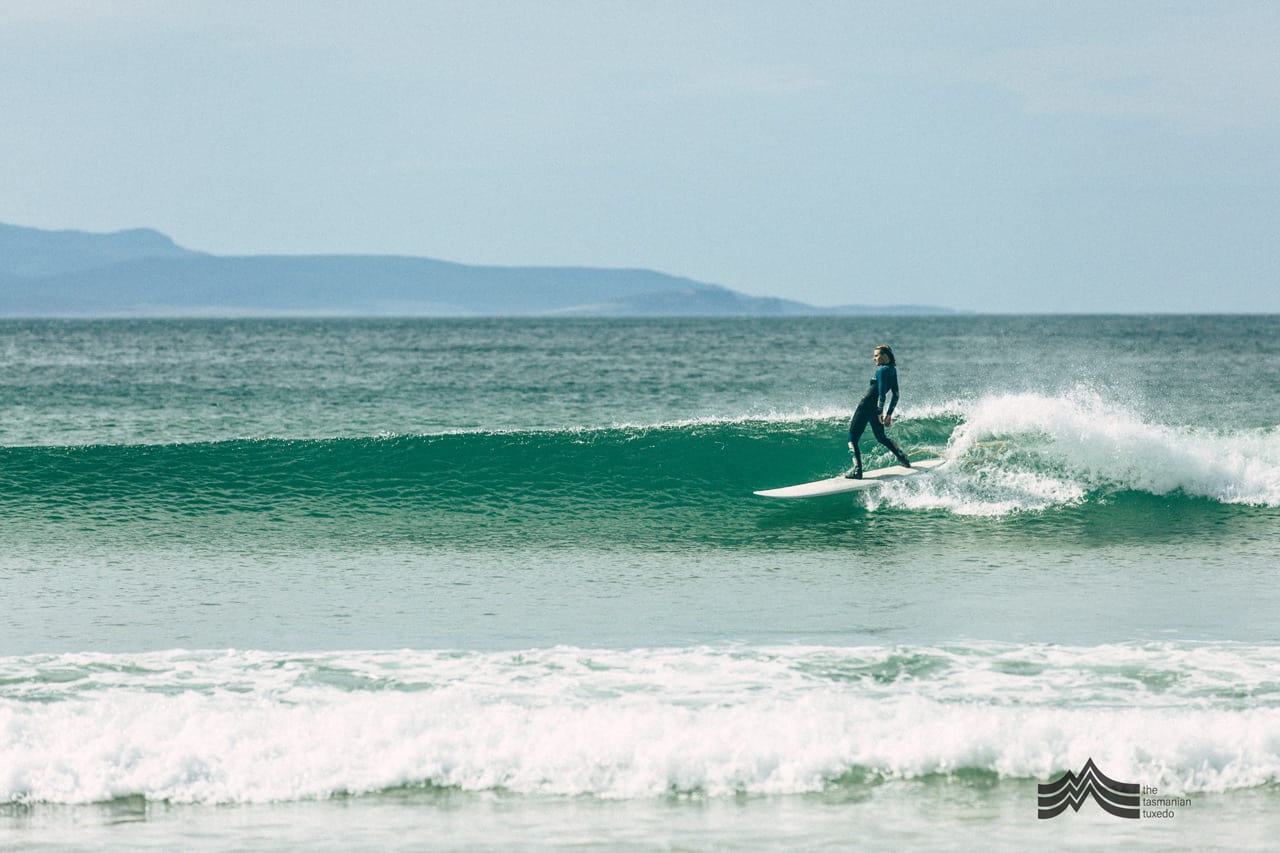 “I’m not scared now, but I can’t really explain why. Maybe time, maybe I’m more realistic,” ponders Brooke. “I took a break and went to Bali to get away from Australia. I think that really helped…being in a different environment. I came back ready to launch myself into uni and into life, but this time I have a completely different headspace.”

Well respected in the local surf scene, Brooke caused a stir last year when she spoke out about the lack of pay in Tasmania’s well known West Coast Classic. “I never competed for the money, but when I realised what the men were winning compared to the fact the women were getting nothing, it was just wrong,” explains Brooke. “What message does that send to everyone?”

“I’d often competed in the boys comps myself as there were simply no female competitions on offer,” says Brooke. “Girls were an afterthought and I thought it was time that someone said something.” 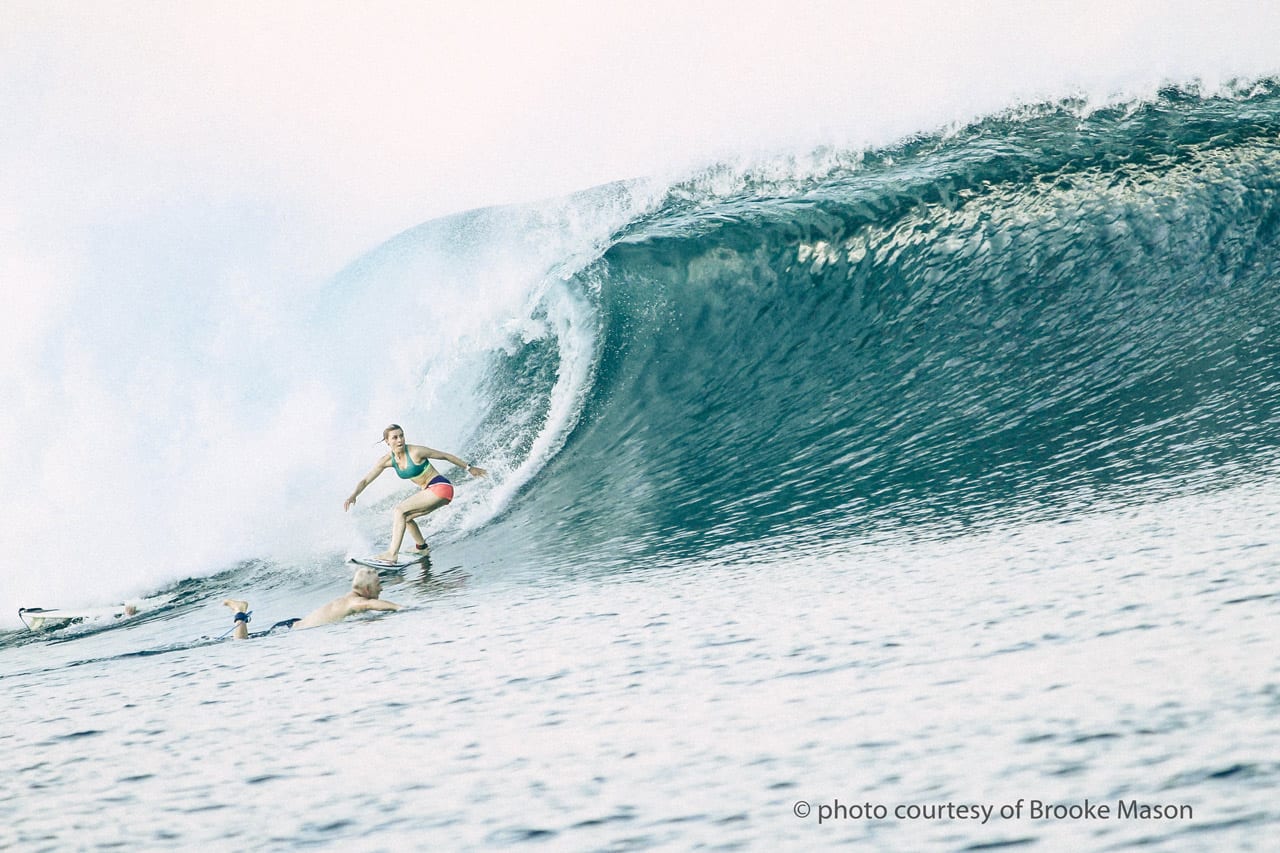 The issue pushed Brooke to stand her ground and speak out about equal pay for female surfers. “A lot happened, and a lot of minds were changed. I found it tough but I’m glad I stood up,” she nods. “I remember asking my mum what I should do and I’m so glad I took her advice and didn’t back down. Surfing Tasmania now offers equal prize money for men and women and what happened here kick started the trend around Australia, and even overseas.”

Brooke says today she has a more mature appreciation for the things that count. “I used to be really competitive and did things just for the challenge – I think medicine was one of those things too. Now I’m doing it because I want to give back to others and really make a difference in mental health. One day I’d like to run a wellness clinic.” She adds, “I’ve learnt a lot in the past few years – to talk less and listen more, and to enjoy rather than compete.”

“I look at my patients now and I’m so much more connected. I know that everyone has a story and everyone faces grief. The two life threatening events that have touched me have really changed my perspective on life.” 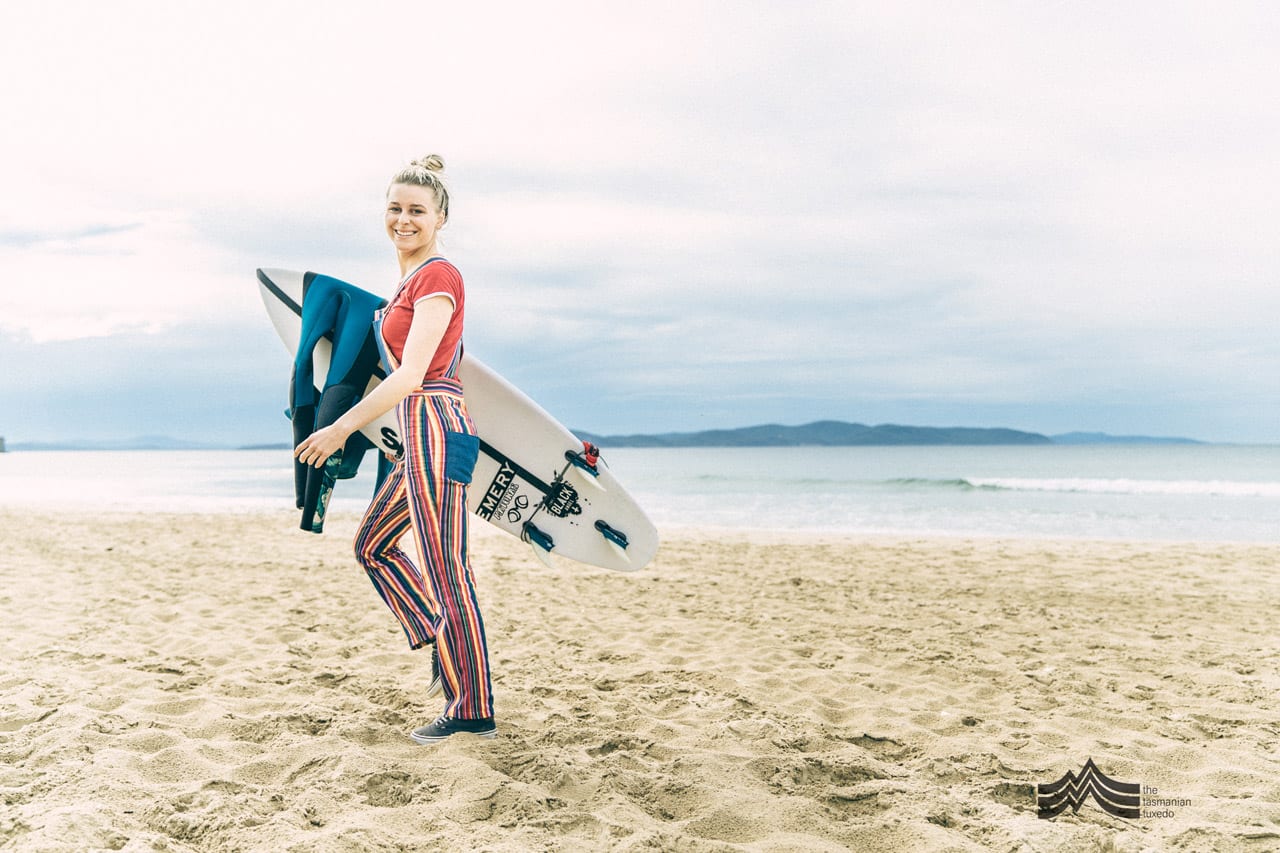