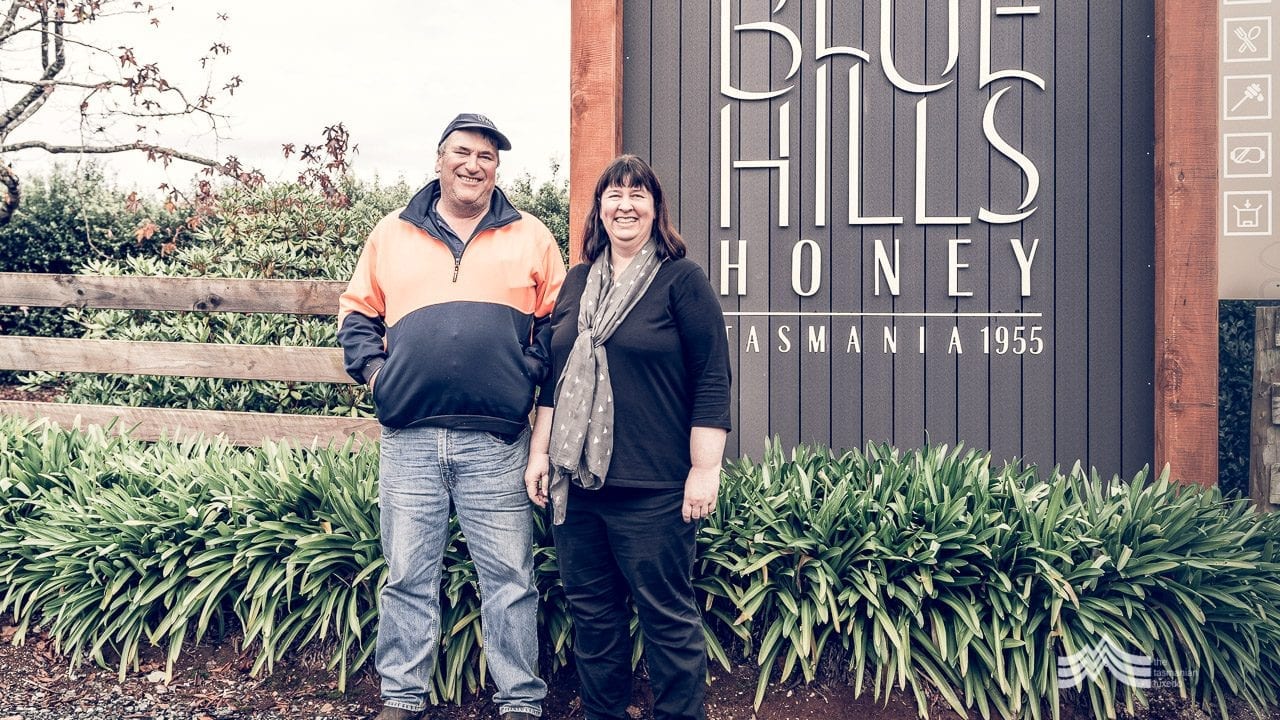 “Each honey is different,” says Nicola Charles. “Regional variation plays a big part in our industry. The soils, the plants…the smell, aroma and taste very much vary according to location. It’s a lot like wine in many ways, and beekeepers now will refer to their stocks as vintages. Honey really encapsulates the very essence of an area.”

The Charles family journey is inextricably wound around Blue Hills Honey – their unashamed labour of love. Meet them in the middle of nowhere and you’ll easily get lost in their down to earth approach, their genuine love of their country paradise, and their simple passion for bees.

It’s breathtakingly beautiful. Crisp mountain air, rolling green hills and stark winter sunshine. Perched on the edge of Tasmania’s pristine Tarkine wilderness, the tiny township of Mawbanna is farming paradise. Fertile soils, generous rainfalls, and as the locals will tell you, ‘the freshest air in the world.’ 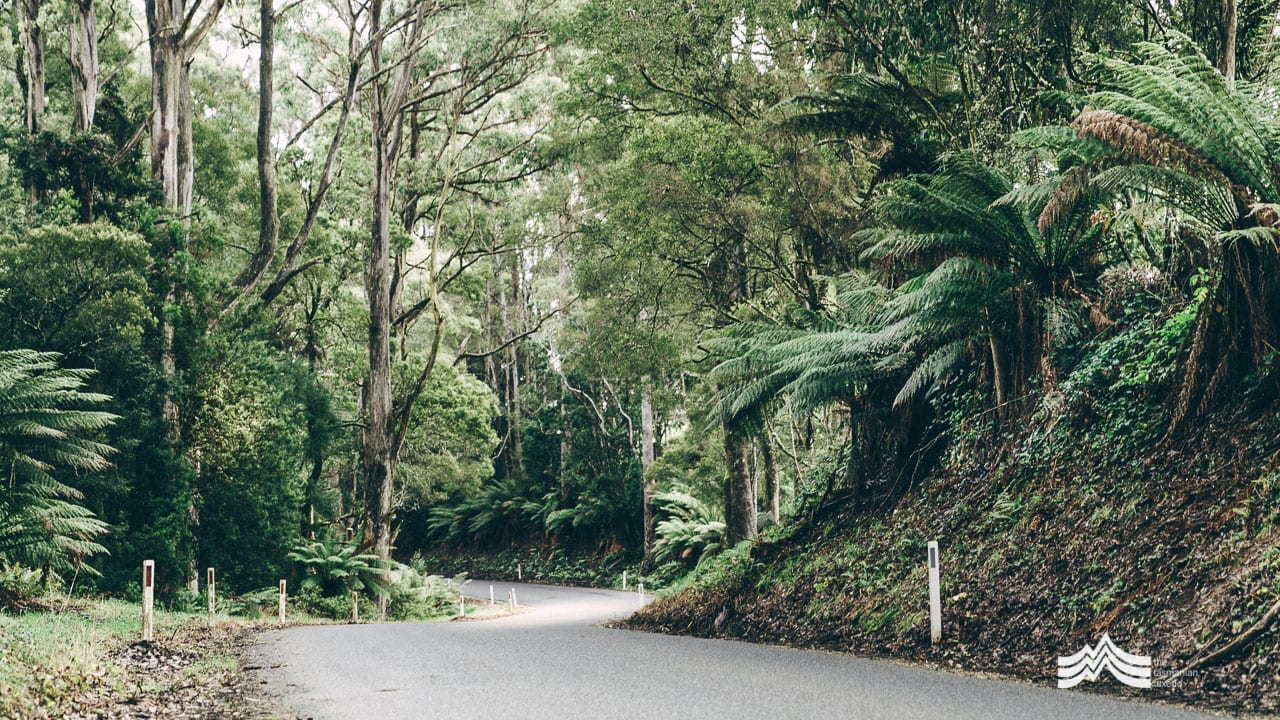 Robbie and Nicola Charles both grew up here. “As the story goes, I married the boy next door,” laughs Nicola. “We have photos of us at school together. We both love this area, and despite the fact I worked in Melbourne, London and Hobart for a few years as an intensive care nurse, my heart was here. I came back regularly for a green fix and we got to the point where we decided to make a go of things.” She pauses before adding with a cheeky smile, “Looking back, I blame a bottle of red one New Year’s Eve.”

Robbie is a third generation beekeeper. His father, Reuben, inherited his fascination with bees from Robbie’s grandfather, William Charles. “Dad, along with the support of my mum of course, started the family business back in 1955,” says Robbie proudly. “He began keeping bees as a hobby and it just evolved into something commercial. I wasn’t one for school, so I quickly learnt to love them too…it’s a legacy that’s shaped where we are today.” 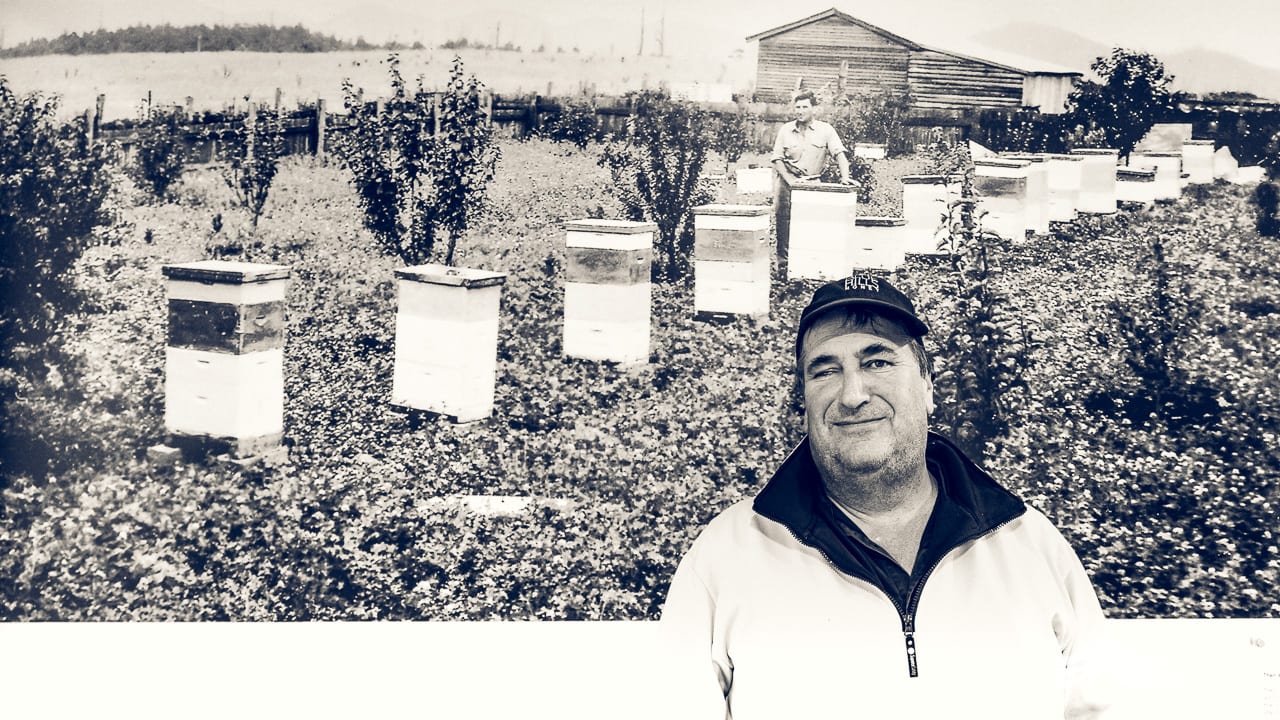 Nicola describes the challenges the family have faced over the past two decades. “Almost twenty years ago bulk honey really suffered in the commodities market. We saw prices fall from $4.80 to $1.60 per kilo. That really hit home and we had to step back and decide whether to stay or to get out of the industry. It was a tough time.” Luckily for Tasmania, the pair decided to ‘give it a go’ – selling assets including a house and land to fund their commitment to the local honey market.

“It was the hardest thing we ever did,” recalls Nicola honestly. “But also the best thing. We had no customer base to begin with and we really had to start from scratch. Our earliest customers were international. We exported overseas, mainly to the UK and Germany. We carved out a market for ourselves and before long even won a couple of export awards.”

Nicola describes how the pair were keen to charter new territory and not compete with their peers. “We have a lot of mentors within our industry and we all have complete respect for each other. Beekeepers are amazing – real salt of the earth people. It has always been important for us to make room for everyone in the marketplace and not compete with each other. We choose the softer path and really tried to ensure there was room for everyone. Luckily, it’s worked.”

“From the start we’ve stayed true to our value proposition,” says Nicola. “Setting that was important as many beekeepers undervalue their work. Beekeeping is hard. It is physically very demanding and involves a lot of plain hard work. We’ve insisted on fair pricing from the outset to value not only what we do here at Blue Hills, but to support the industry as a whole.” 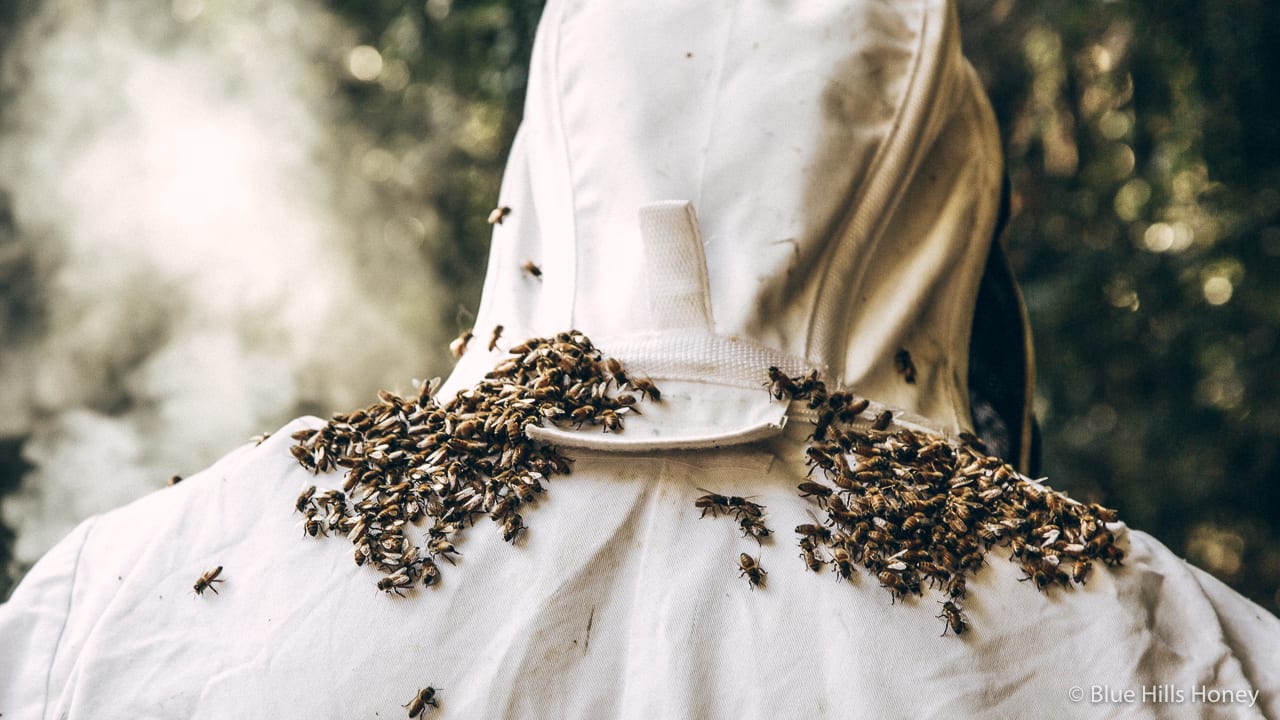 Blue Hills Honey now manages hives across the pristine Tarkine wilderness of Tasmania’s remote north west. “We have 2000 hives at present,” explains Nicola. “That equates to 80 – 100 000 bees per hive during harvest season, and about 20 – 30 000 during the cooler winter months. They’re generally split into groups of about 100 hives and each is located in a separate area. These change with the seasons too as we locate our bees closer to the coast in the winter months. The groups are roughly five kilometres apart so they have their own fly range. Bees from sister hives will actually visit each other, but otherwise they can be quite territorial.”

The location is second to none. “Out here it’s just spectacular,” says Nicola. “We have great conditions for breeding bees: good warm springs, gentle rains, summers that are not too hot and winters that are not too cold. These conditions produce optimum nectar flow in our local leatherwood and that’s certainly a factor that keeps our bees happy. Environmental factors such as drought and fires can all have a marked effect though. We have to give real thought as to risk management around those variables.” 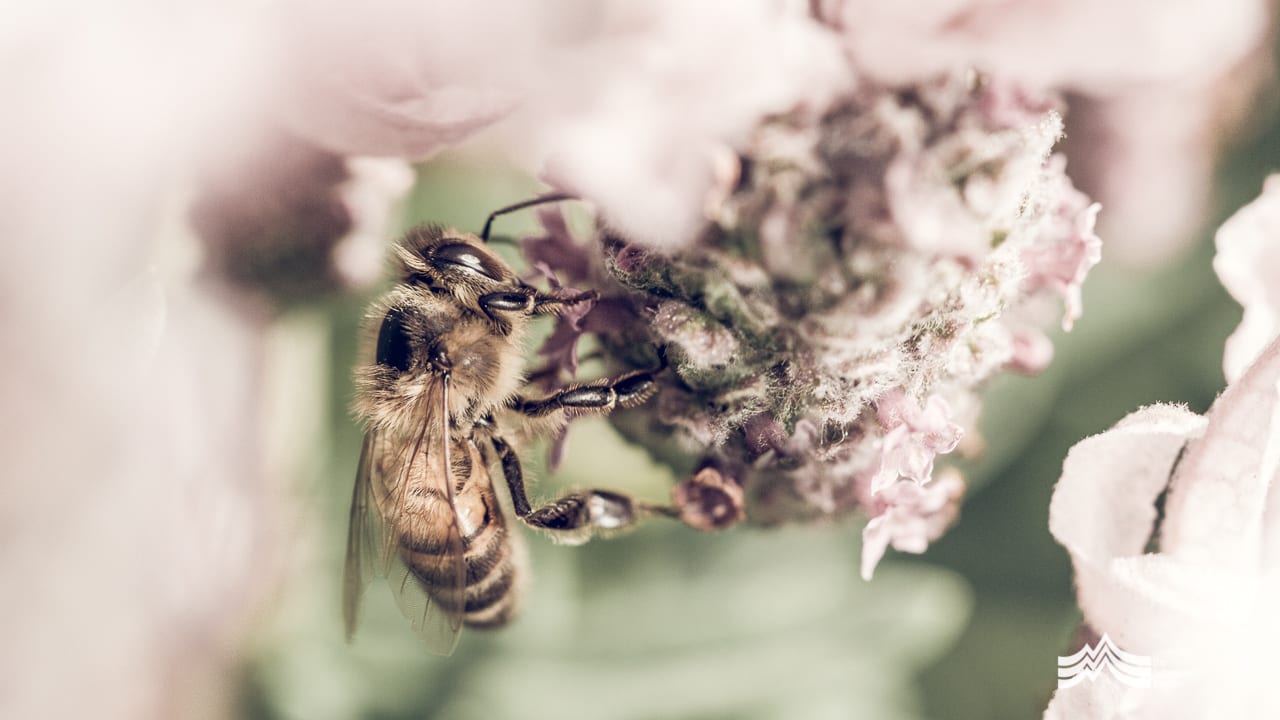 Like all agricultural enterprises, the challenges faced by beekeepers are many and varied. “We need consistent heat over summer and no storms – lightening can easily start fires and they can obviously cause disaster. We can also be affected by local farming practices. Our bees love things that farmers don’t: blackberry, clover and pasture honey is very popular and changes in farming since our parents day has meant subsequent changes in the amount of that type of honey we are able to produce,” explains Nicola. “Back in Robbie’s father’s day that pasture honey would have been 70% of the harvest, whereas today things have pretty much reversed. We’re also doing smaller volumes of honey but value adding to targeted markets.” 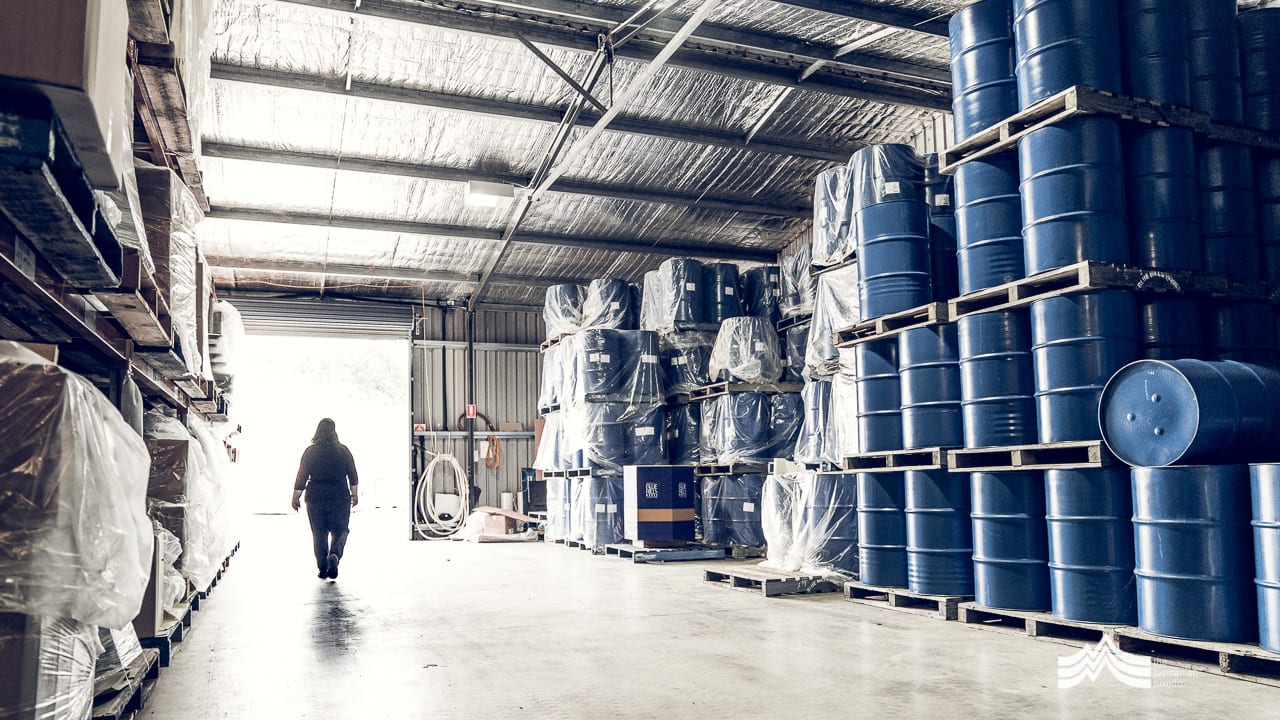 Today, Blue Hills Honey also supplies a significant domestic market. “Most of our domestic supplies go into retail jars. Tasmanian honey is well respected and we really appreciate the move Australians have made to buying local. It’s a good feeling to be supplying your own country, however we still honour the commitment we have to the international market as it was those buyers that really supported us in the early days and we will always be thankful for that.”

Robbie goes on to explain the strong relationships they still share across the globe. “When international visitors try our honey it’s so rewarding to see the expression on their faces. Their eyes light up, and even through in many cases we don’t speak the same language, it’s very easy for me to interpret their reaction. That kind of stuff is pretty special.”

The ancient leatherwood tree, only found in the cool temperate rainforests of Tasmania, has become a crucial part of Blue Hills Honey. “It’s our single most important nectar plant,” says Nicola. “It accounts for about 70% of our honey and we’d really love to see it protected. A lot has been lost over time, to the point where it’s now a rare and threatened species. The interesting thing about leatherwood is that, unlike our eucalypts, when a fire passes through an area the intense heat actually prevents the seeds from germinating. Fire through the Tarkine and the western wilds can really threaten commercial honey production here in Tassie.” 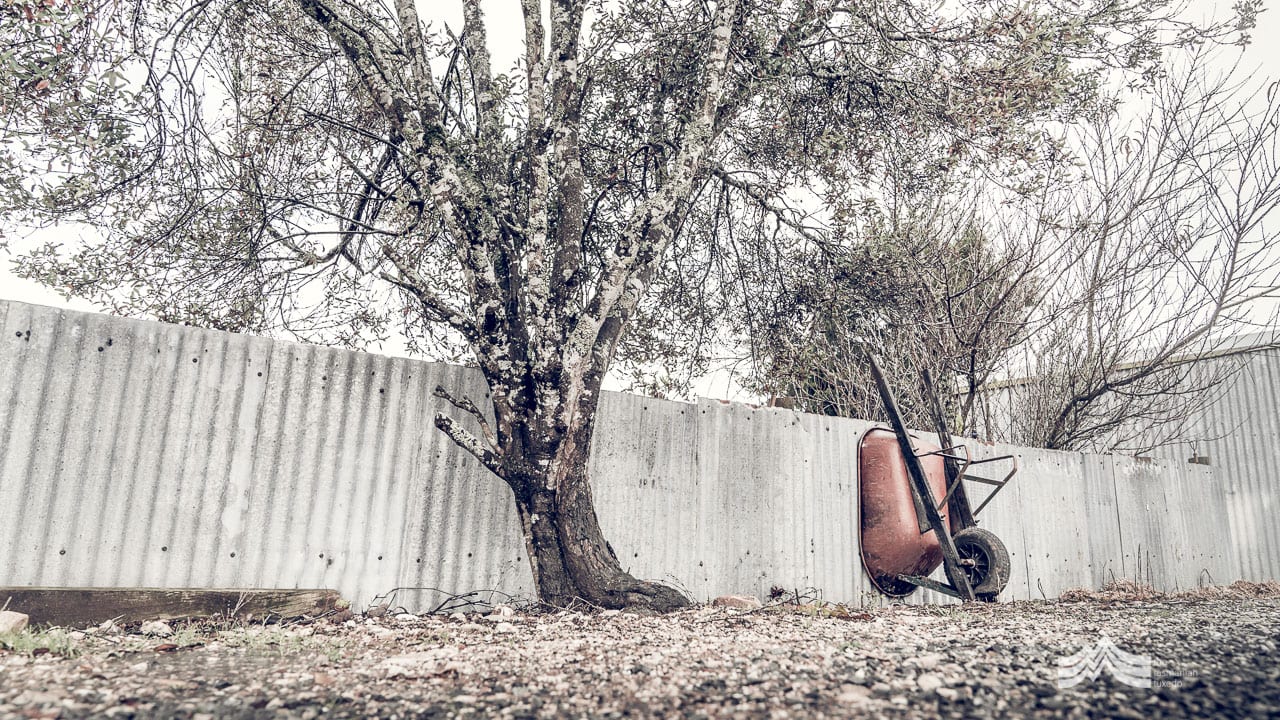 The Blue Hills production facility has grown slowly over time, remaining on the very same site where things began decades ago. “We love it here for all sorts of reasons,” says Nicola, motioning around her. “It’s where things originally began with Robbie’s family and we’re so close to the heart of the Tarkine wilderness. Interestingly, here in Mawbanna, the last wild Tasmanian tiger was shot in the 1930s. The mystery of the tiger has never waned and we’re always hopeful it’s hidden deep within these pristine forests.”

“As we’ve grown, we’ve deliberately chosen to keep our old sheds and facilities,” explains Nicola. “They’re part of the fabric and heart of the business and each new addition generally represents a grant that we’ve been lucky enough to be awarded. Every little bit of support has helped us to advance what we do and I love looking back on the past and how we used to do things. It’s a real nod to our heritage and evolution.” 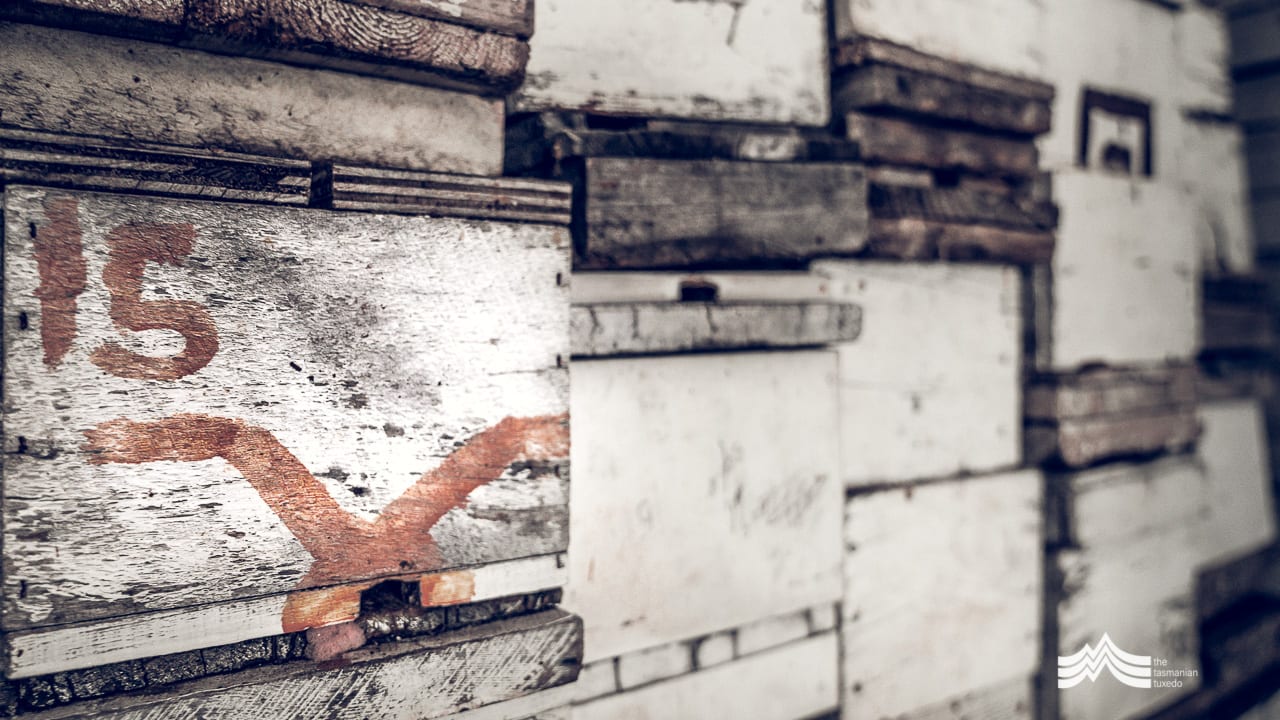 Looking forward, the Charles’ are excited about the future of honey. “There’s so much potential in regard to the impact honey can have on human health. We’re the founders of active Manuka honey here in Tasmania and we know there are so many benefits: it’s antibacterial and full of antioxidants, vitamins and minerals, it’s low GI and a great replacement for commercial sugar. This is also the case for our leatherwood honey. As a nurse, the medicinal possibilities really intrigue me and we’re looking to support the exciting research that’s being done around the world. There’s so much still to explore.”

Launching in July 2019, the latest addition is the new café and visitor centre. “Our aim here is to share what we do with others. We’re opening our operations so people can see we are committed to producing a world class product and to provide confidence in the Tasmanian market. Furthermore, it’s about providing education around our industry. For the benefit of all beekeepers, we want to maintain the value of Tassie honey. What we do as an industry involves a lot of hard work and we notice that when we explain that well, the public really appreciate and understand the value of the product. With the average age of beekeepers in Tasmania being about 60, it’s also a way we can share our knowledge with others. We really want a bright future for Tasmanian honey and we love working collaboratively with other beekeepers.” 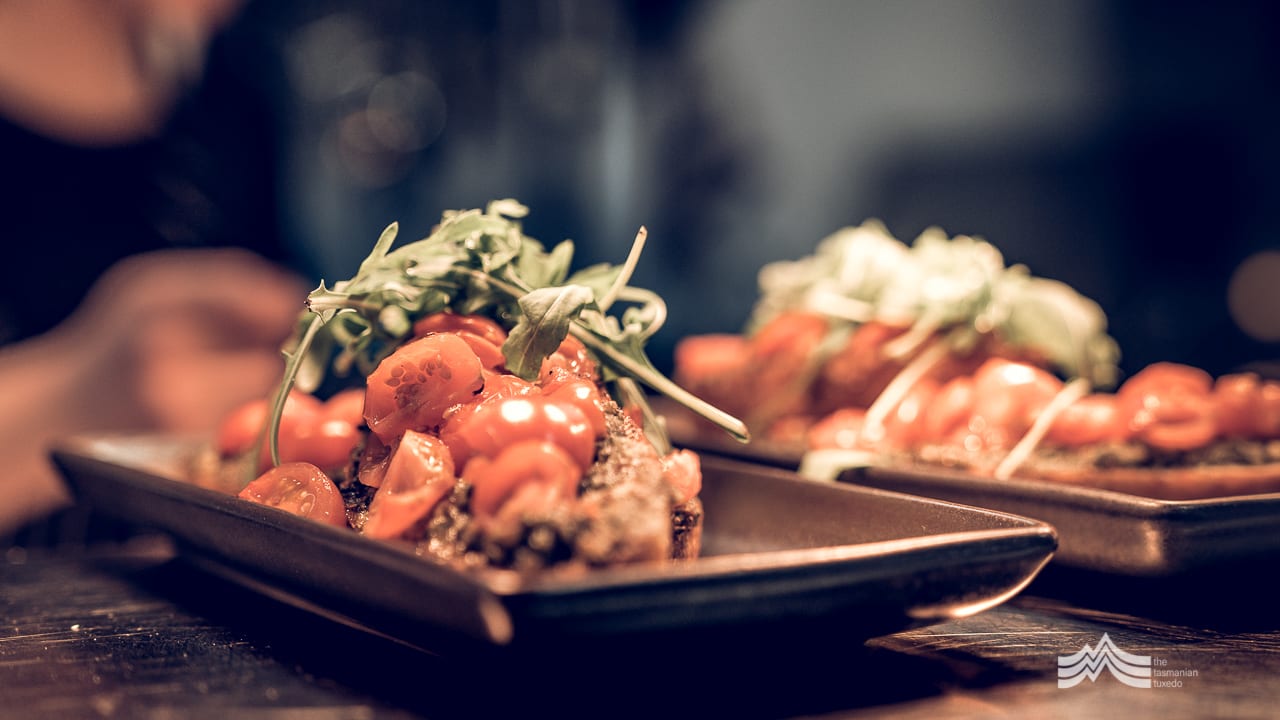 Leather and Wood café has quickly become a drawcard for the locals. On a cool and drizzly  winter afternoon, you’ll find the place alive with local chatter as people stop for a warm lunch and to while away the afternoon by the roaring fire. For the tourists en route to the striking Dip Falls just a few kilometres further down the road, it’s quickly becoming the hidden gem that makes their day. Feijoa crumble tarts, fresh croissants and homemade muffins are just a few of the delights that lie in wait.

“They love calling in for a good coffee and some honey sampling,” says Nicola. “We’re getting really positive feedback from our visitors and are using the opportunity to showcase how we harvest. The new glass front production facility gives a genuine insight into what we do to pack our honey and we’re very excited to be launching Australia’s first virtual reality beehive experience shortly. Imagine stepping inside a beehive…flying over a leatherwood forest…or being a bee being tapped out of the box during a harvest. This is cutting edge and will put our guests in the middle of life from both Blue Hills Honey and the bees’ perspective.”

The Charles’s family aptly named their business after the stunning local surroundings. Framed by a backdrop of rugged mountain peaks, it’s an idyllic location that still largely flies under the tourism radar. “A city’s a city anywhere in the world,” states Robbie, matter of factly. “But out here it’s different. I love the tranquillity…I can get up to the top of a hill and overlook some amazing country. I just love the peace.” 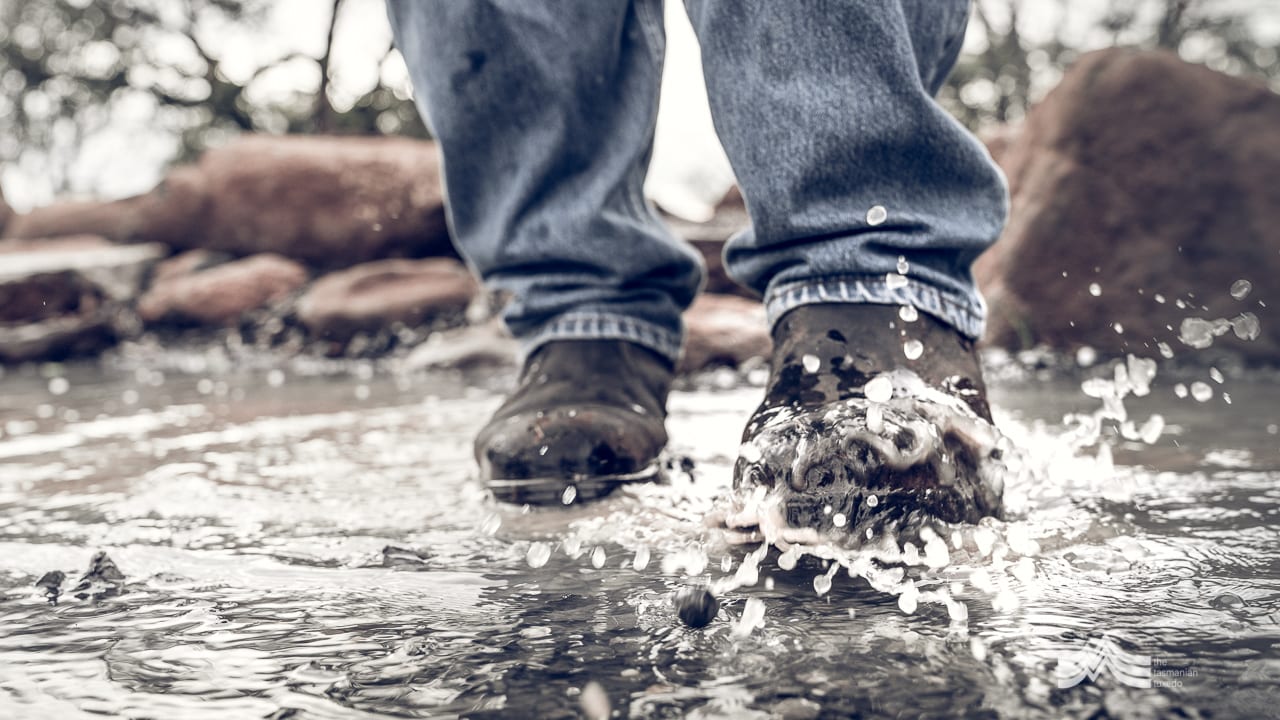 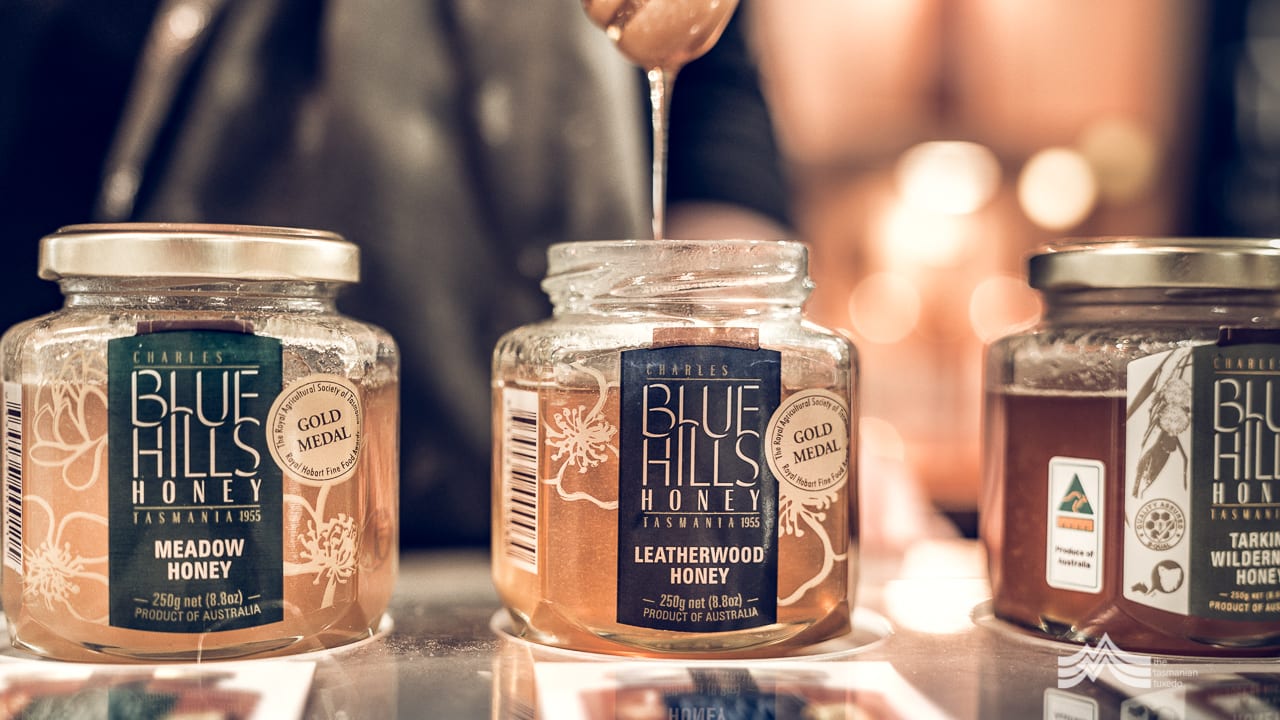 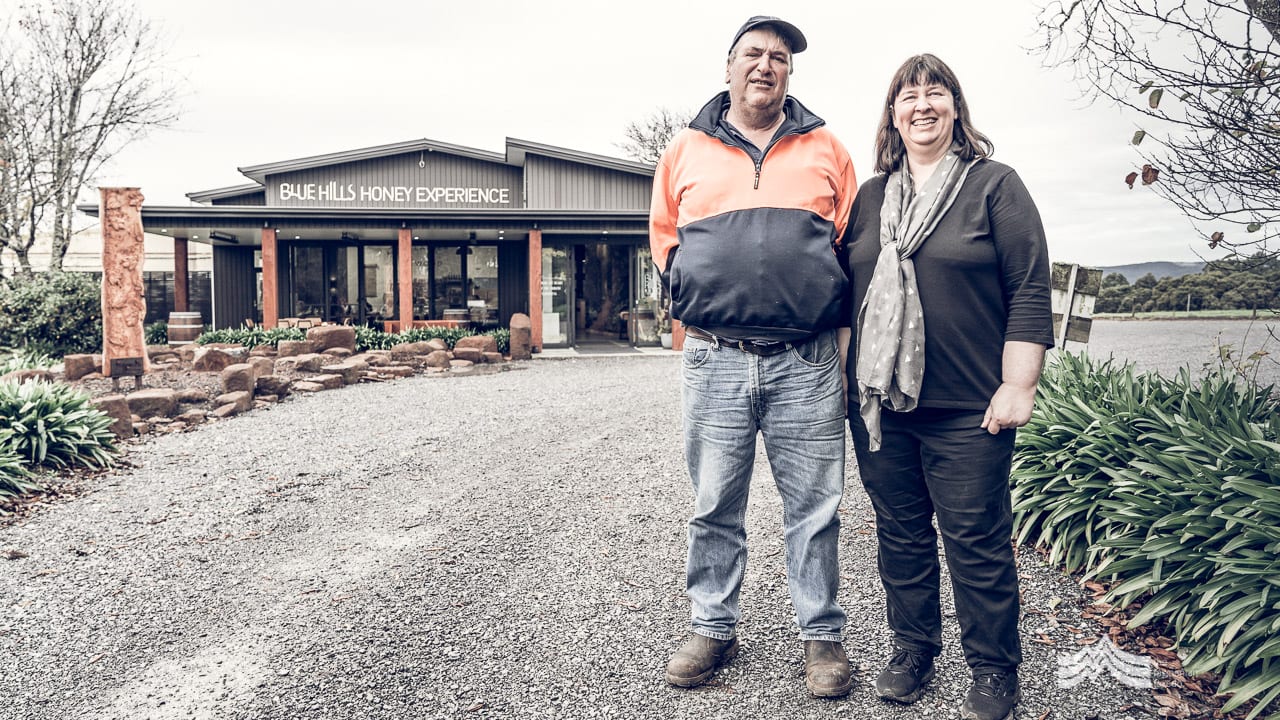 Explore Nicola and Robbie’s full product range and plan your visit to Blue Hills Honey via their website.