#38 Made in China. Made for Tasmania. 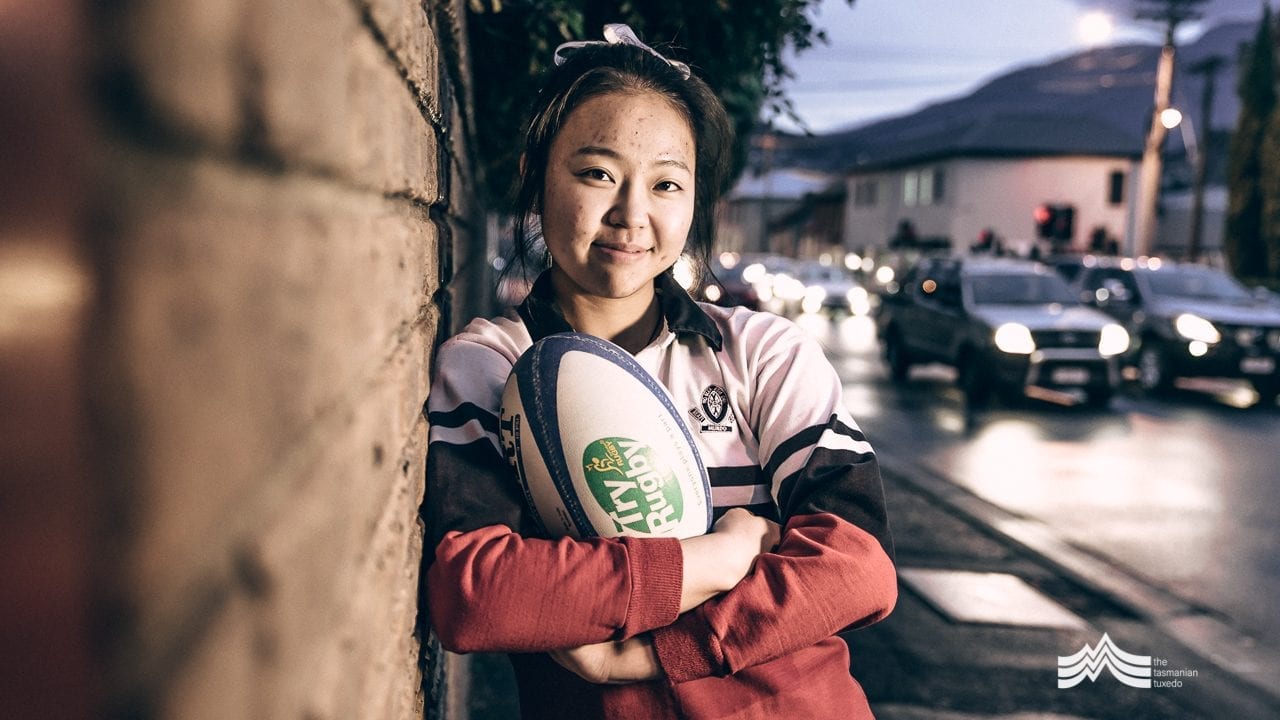 Over 125 years ago, the HMS Coptic set sail from England bound for the colonies. She carried on board a small group of Anglican women who shared determination, independence and a selfless desire to make change. Together these remarkable members of the Community of the Sisters of the Church established schools across Australia, New Zealand and Canada. The very first of these was St Michael’s Collegiate in Hobart.

After arriving to the unknown, it took less than a month for the Sisters to open an educational institution and begin gathering local children each morning for their lessons. These women meant business and believed wholeheartedly in the value of a well-rounded education. Although the Sisters handed Collegiate’s reigns over to a board of management in the early 1970s, their traditions and values remain alive and well today.

Fast forward well over a century and the Sisters would undoubtedly be proud of 18 year old Angelia Zhang. In the throes of completing her final year at Collegiate, Angelia is proud to be the school’s current Head Girl, a position that dates back to the early 1900s when prefects were introduced to oversee the ‘good behaviour and general tone of the school.’ Not only does she represent so many of those values, but she shares a kindred journey of exploration with the women who came before her, well over one hundred years ago. 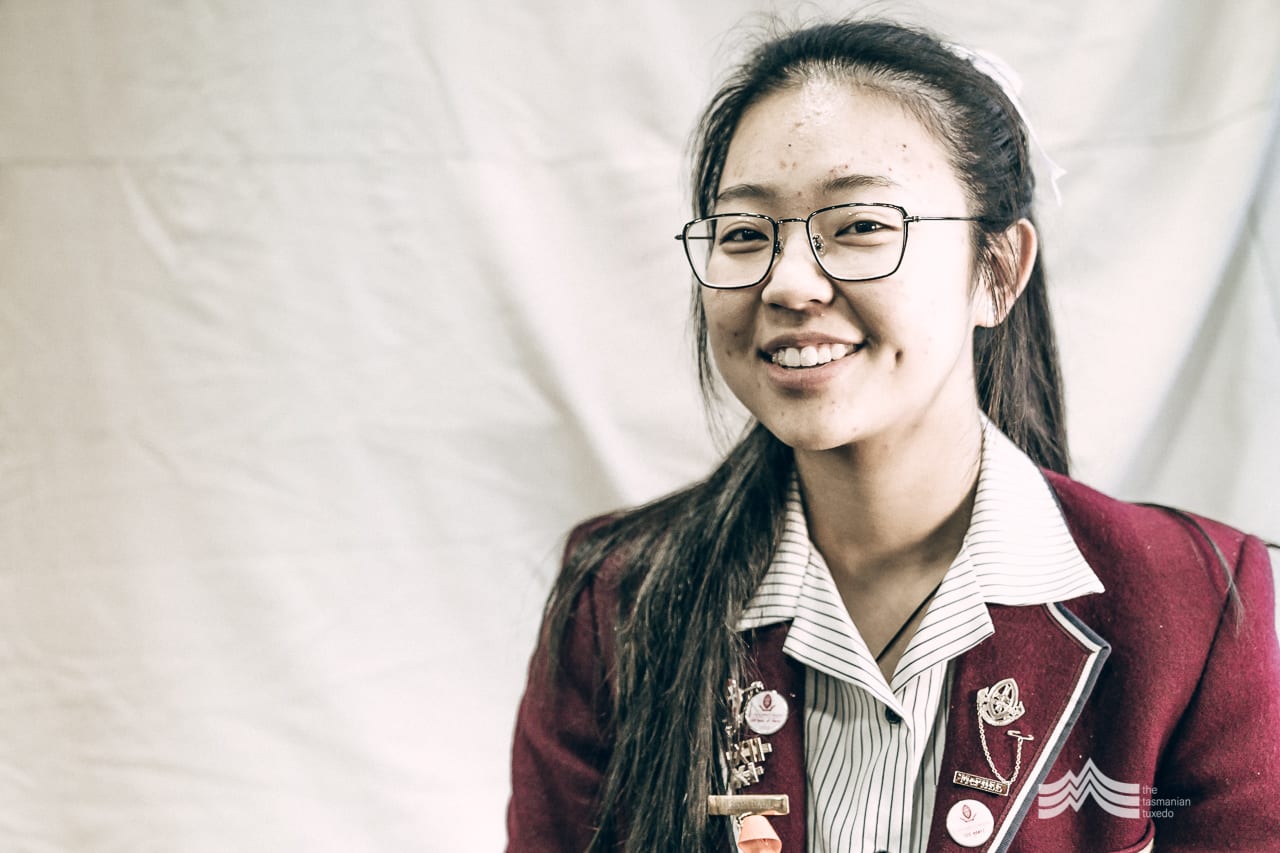 “Growing up in China, I never thought I would end up going to school overseas,” says Angelia. “We visited Australia a couple of times when I was younger and I loved it, but I never for a moment thought it would be where I ended up. I know now that my parents had other ideas for me…and that they were worried that the school system in China wasn’t the best thing for me. I know they were sad that I had so much study pressure there.”

Growing up Tianjin, four hours from Beijing in northern China, Angelia is the only child of loving parents, both with backgrounds in education. “I clearly remember the day they told me I was going to study overseas,” she recalls. “It was funny because even my teacher knew before me…my parents didn’t want to worry me until things were settled…I cried when they told me, but not because I was sad to leave, just because it was a huge turning point in my life…it was a really big thing.”

This strikingly mature and honest young lady goes on to describe her experience in the years that followed. “I’m so glad my parents made this choice for me.” Angelia continues, “I remember them explaining to me I would have far more freedom here, that learning would be more fun for me, that I would become more independent, and that the lifestyle here was better. And they were right. My parents could really see the value of the education in Tasmania and they knew it would suit me as an individual.”

Angelia chatters brightly about her school life back in China and readily compares it to the last few years living in Collegiate’s on-site boarding house in the heart of Hobart. “There are so many extra classes in China,” she describes. “I would be expected to be doing so much more in terms of the volume of work. Here, I work hard but it’s in another way…it’s more about the depth of my work. We are encouraged to think, to have opinions, to research and explore. In China, it’s just about getting the answers to questions correct…not so much about the thought behind them.”

The school’s history of welcoming boarders dates back almost as far as the Sisters themselves. “I live here with about 40 other boarders,” says Angelia. “Girls from all over the world, but also girls who come from families across rural Tasmania…and also other parts of Australia. I have made so many friends living here. It’s my second family, complete with a dog!” 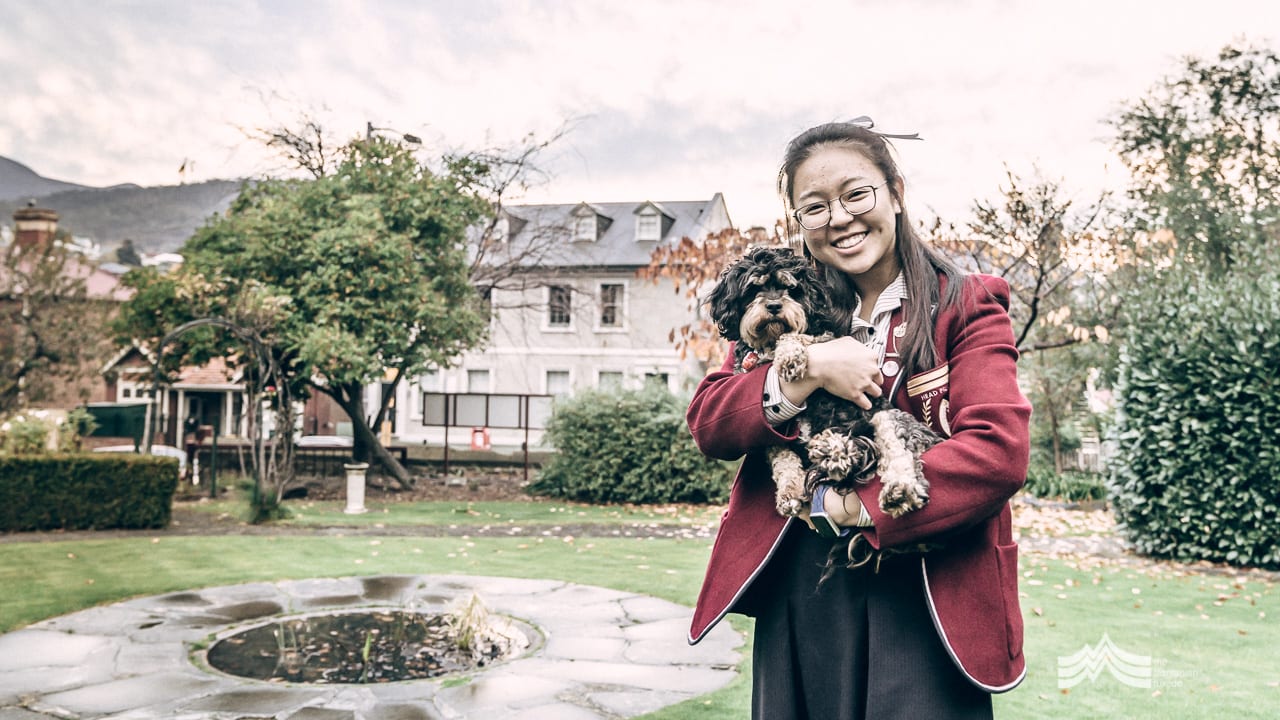 “I remember when I first arrived in Year 9, my English was pretty bad,” Angelia grins. “My parents were with me and we had a tour with one of the teachers who spoke Chinese. When I first went upstairs to find my room in the Boarding House I thought it was like a maze,” she laughs. “But now I think it’s just really cool.”

The ‘cool’ building Angelia and her friends call home has housed the school since 1895. ‘Stephenville’ was once the elegant home of Alfred Stephen, former Solicitor General for Tasmania, and has played home to hundreds of young women over the course of the past 125 years. With an intriguing history of its own it boasts many original features, stunning gardens and an envious guest list, including Charles Darwin who visited for dinner back in 1836. Today, the girls gather daily in the very same dining room and the ageing walls continue to soak in the next generation of conversation. 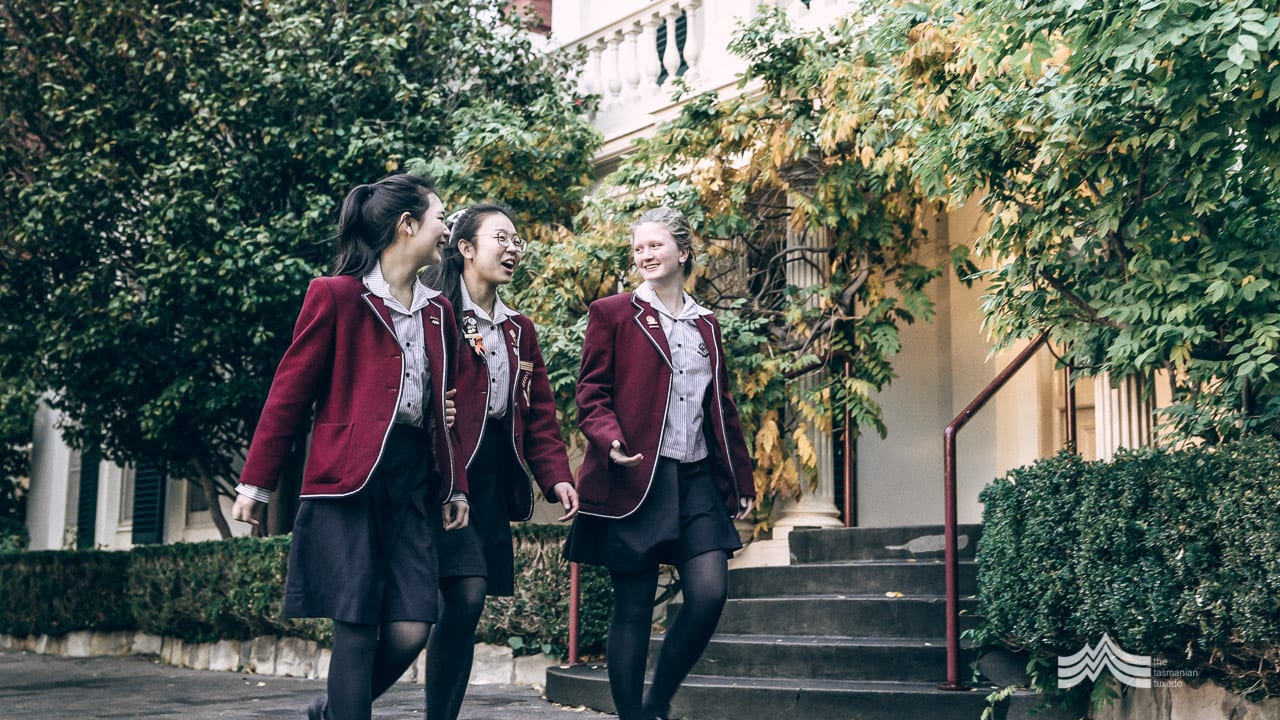 It’s easy to think that Angelia communicates more effectively with her parents than most other teenagers. “I FaceTime them every single day,” she says. “It’s a habit now…a couple of times a week mum’s work commitments clash with the time we usually talk, but dad is always there to ask me lots of questions,” she laughs. “We rarely miss a conversation.”

Completing your secondary education in a language other than your native tongue is unimaginable to most. “My English has improved out of sight since I arrived three years ago,” says Angelia, when asked about how she’s coped with the transition to learning in English. “I had studied English in China but we really only wrote it and listened to recordings occasionally…we didn’t speak it and I couldn’t say much when I first arrived. I was shy and nervous to begin with, but everyone has been so kind to me here and always encouraged me to speak. I can really feel how much I have improved…it’s very noticeable.”

Towards the end of 2018, Angelia embraced the opportunity to run for prefect. “It was a long process,” she explains. “But I thought to myself, ‘I’m here, I may as well have a go’, so I did. It involved a formal application, a poster, two rounds of interviews and a speech to the entire school. That speech was really hard for me…I didn’t sleep much the night before.”

Since arriving at Collegiate, Angelia describes how she always sat in school assemblies admiring the Head Girl, who sat on a special chair on the stage and represented the students in formal proceedings. “I had always looked at that chair and wondered what it would be like to sit in it. So it seemed natural that it would feature in my speech.” 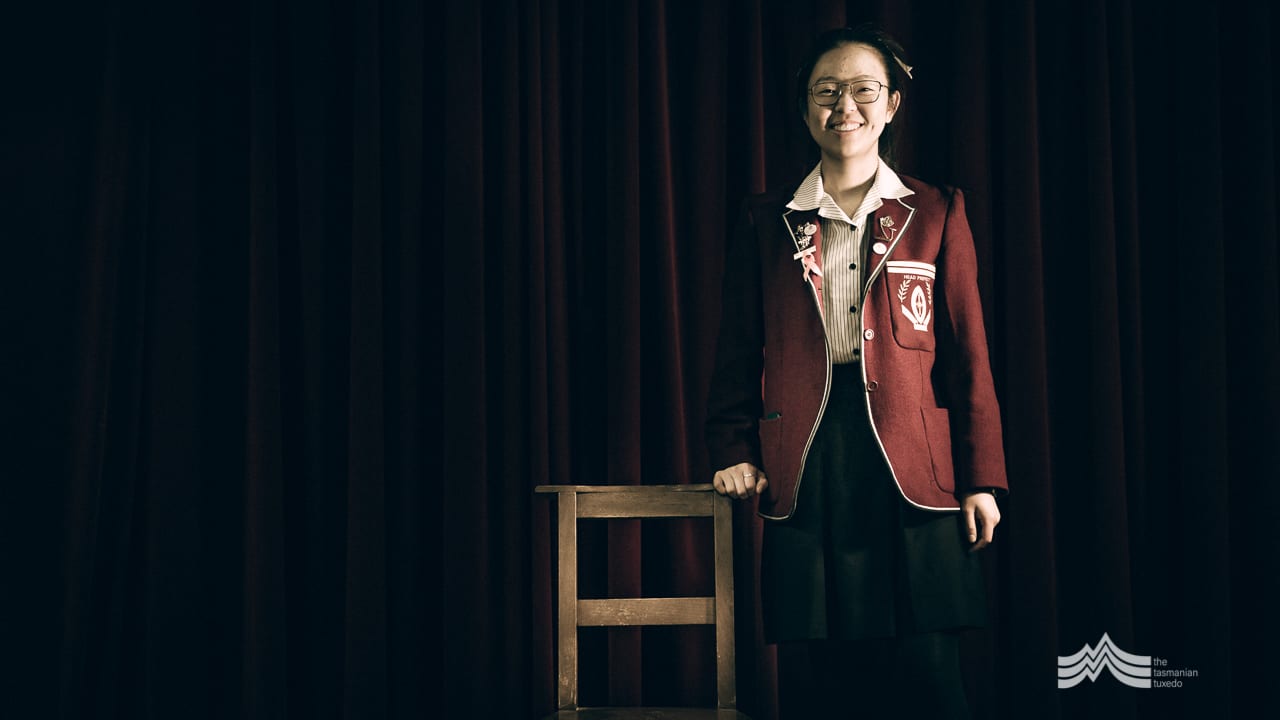 Angelia’s maiden speech involved a letter to that very chair. “I wrote a letter to that chair…and shared it with the school. What that chair represents means a lot to me. I finished off by telling the girls that I might be made in China, but that I really feel like I was made for Collegiate.” She laughs, before adding seriously, “And that’s honestly how I really do feel.”

“This school, and life here in Tasmania, is my second home. I’ve learnt so much, and in so many different ways…at school, through the experiences I’ve been given, and through my friends. It’s all helped me to find my strengths and work out who I am as a person.”

Considering her time in Tasmania, Angelia says, “My parents did a lot of research before sending me here. They chose Tasmania for its safety and size. There are not as many Chinese here compared to other cities and that meant that my English progressed really quickly. I love nature too, so I quickly fell in love with the place. I love camping and being outdoors.”

Angelia is not one to shirk opportunity. “I’ve tried so many new things in my time here,” she says grinning. “I love sport, and while at the moment I’m doing orienteering, badminton, basketball and rugby…my favourite’s rugby… I’ve also tried waterpolo, hockey, netball, tennis, cross country and rowing. I’ll have a go at anything!” 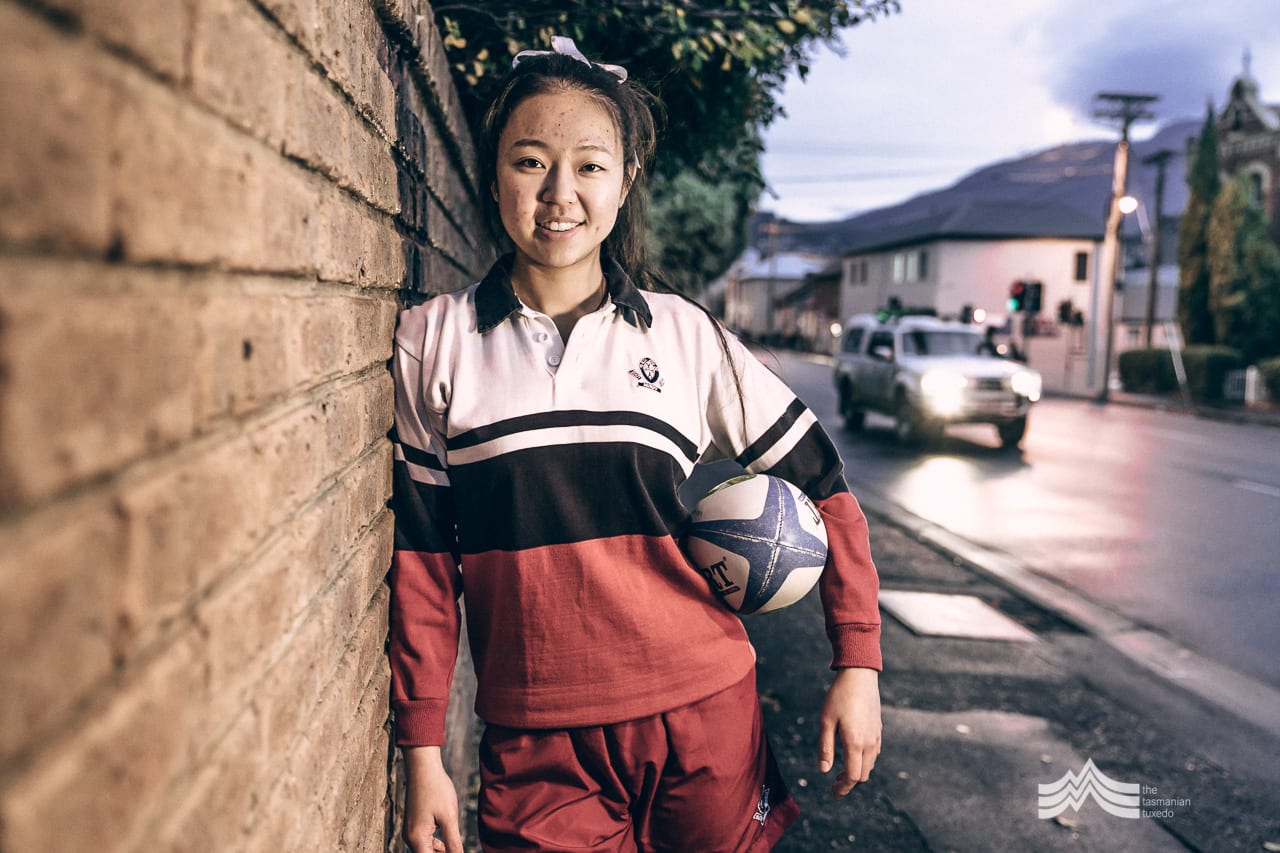 When questioned about her future, Angelia muses, “I’m thinking about studying optometry or social work. I really want to stay in Tasmania…it’s beautiful, clean, multicultural and the people are very kind. I’m not a big fan of larger cities, I’d much prefer to be close to the countryside. I love nature and everything I need is right here.” She giggles and adds, “Who knows, I might even marry a Tasmanian if I can find the right one!”

“When I first arrived I felt like I had arrived to a village in between the mountains,” she muses, gazing out the window of the boarding house towards kunanyi/Mount Wellington. “I can actually feel it changing a little, it has gotten bigger in the last couple of years, but it remains beautiful and it’s where I want to be.” 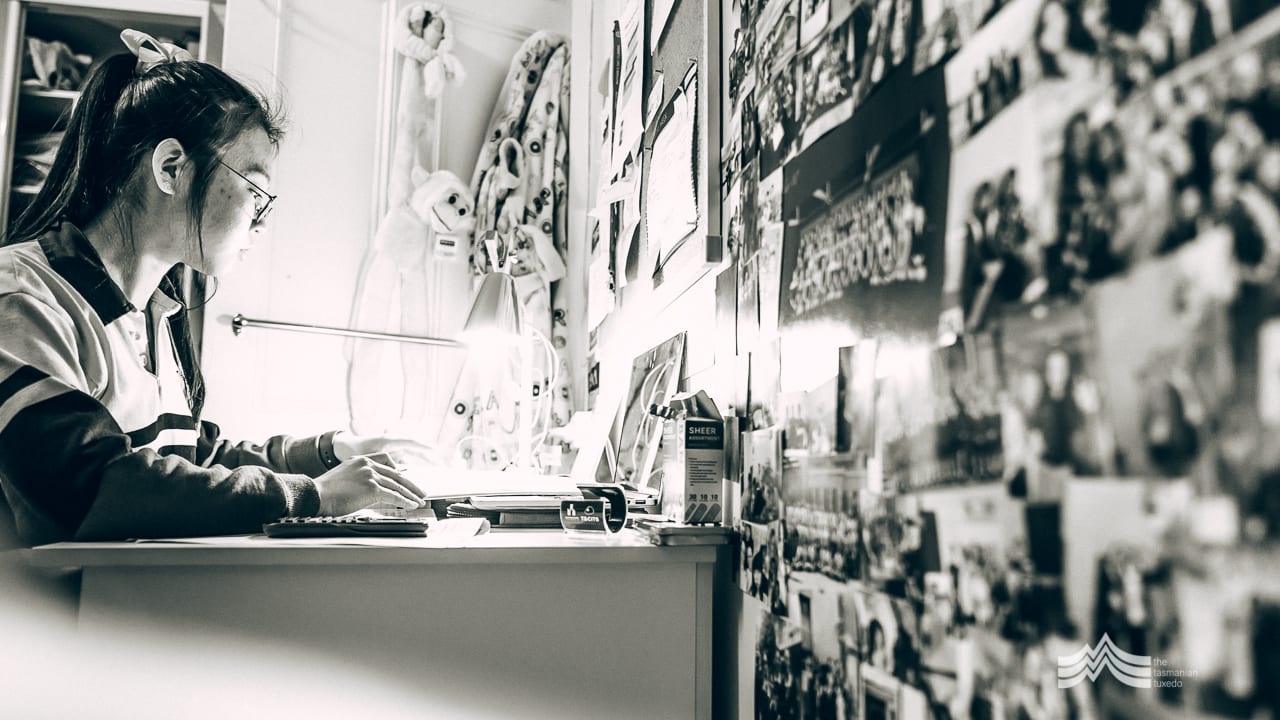 St Michael’s Collegiate is an Anglican day and boarding school for girls in Hobart. Find out more via the Collegiate website.