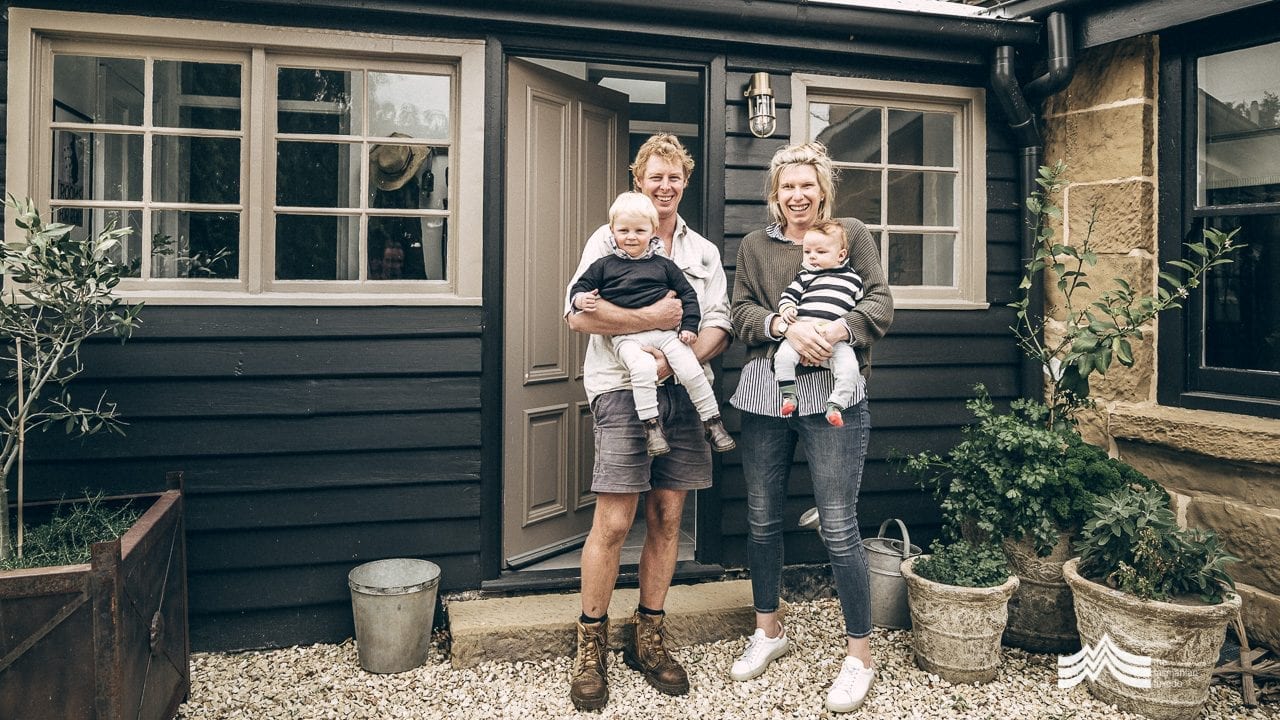 As the autumn light begins to fade and baby Archie dozes off to sleep, it’s not too hard to imagine Raffah House almost a century ago as the busy maternity hospital that it was. “Whilst we were renovating, an old man paused outside and explained to me that he was born in the front room…he’s in his nineties now and has lived here in Oatlands all his life,” smiles owner Sophie Weeding. “Those local connections are pretty special.”

A labour of love, Sophie and husband Nick purchased Raffah House in 2017, embarking on an extensive and sympathetic renovation of this glorious nineteenth century sandstone cottage. “It has a remarkable history,” says Sophie. “And in perhaps the best twist of all, it all started with Nick’s own family over 180 years ago.” 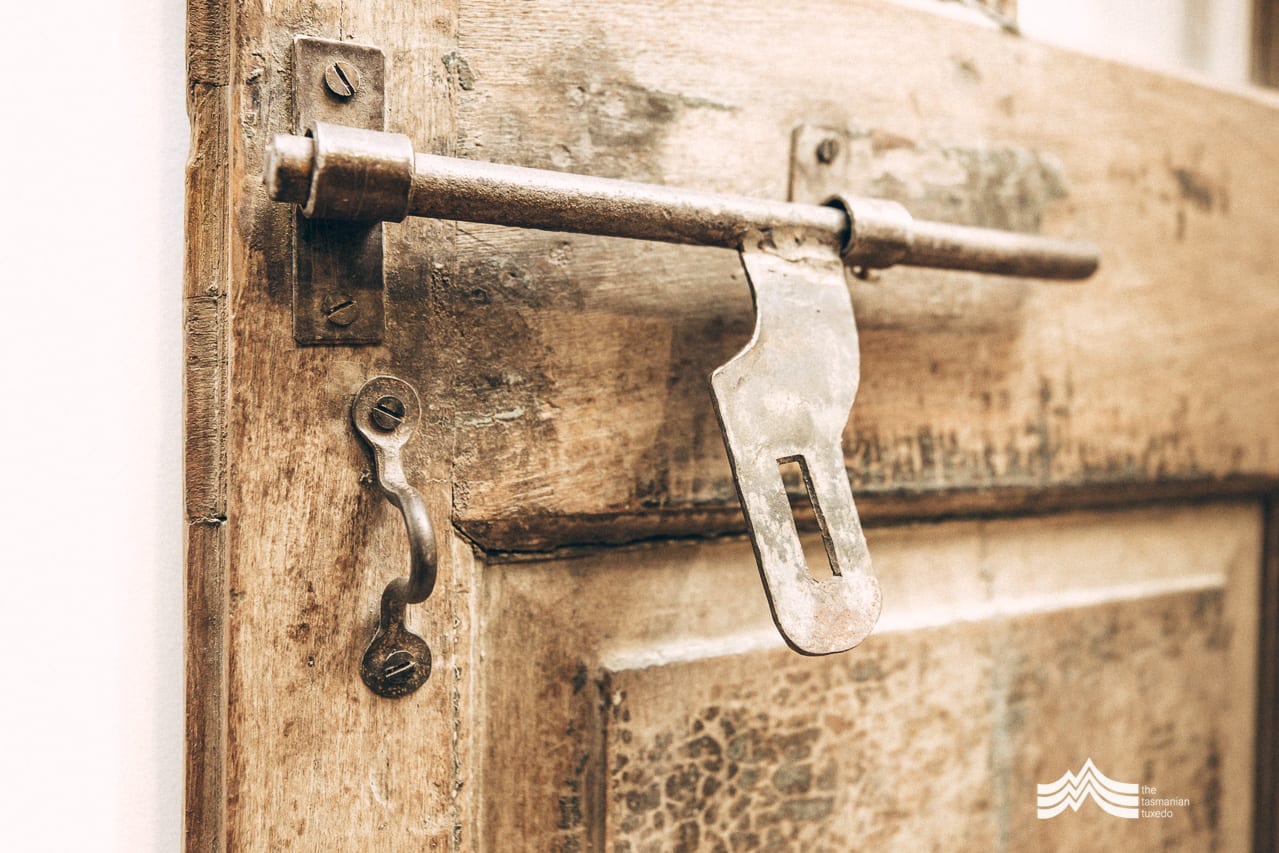 “The Weeding’s have one of the oldest continually operating family agricultural enterprises in Australia…it’s predominantly a merino farm,” smiles Sophie proudly, gazing towards her husband. “We live on the farm too, just down the road on the shores of Lake Dulverton…Nick is continuing the tradition by working the 7000 acre property with his parents and brother.”

The land on which Raffah House stands, right in the middle of one of Tasmania’s earliest townships, was granted to James Weeding in 1828 as a two acre town allotment. “James was Nick’s great-great-great-great-great grandfather and we know he built a store and a two story stone home here,” explains Sophie. “A little later he sold about half the land, including the house, to publican William Barwick who went on to put a new front on the house and opened it as the Midland Hotel. Barwick also erected a shop on the site which he opened in 1860.”

This new building was largest store in the town for many years, the Oatlands Emporium. From drapery and hosiery, to kitchen utensils and medicine…it was all here. In those days it was a two store building, hence the reason why Raffah has such high chimneys…they are a clue to her intriguing past and a nod to times of a bygone era.

In 1881, Barwick subdivided off the parcel of land holding the emporium and sold it to storekeeper Joseph Madden. Interestingly, the parcel purchased by Madden remains the exact 1239 square metre area that Raffah House stands on today. 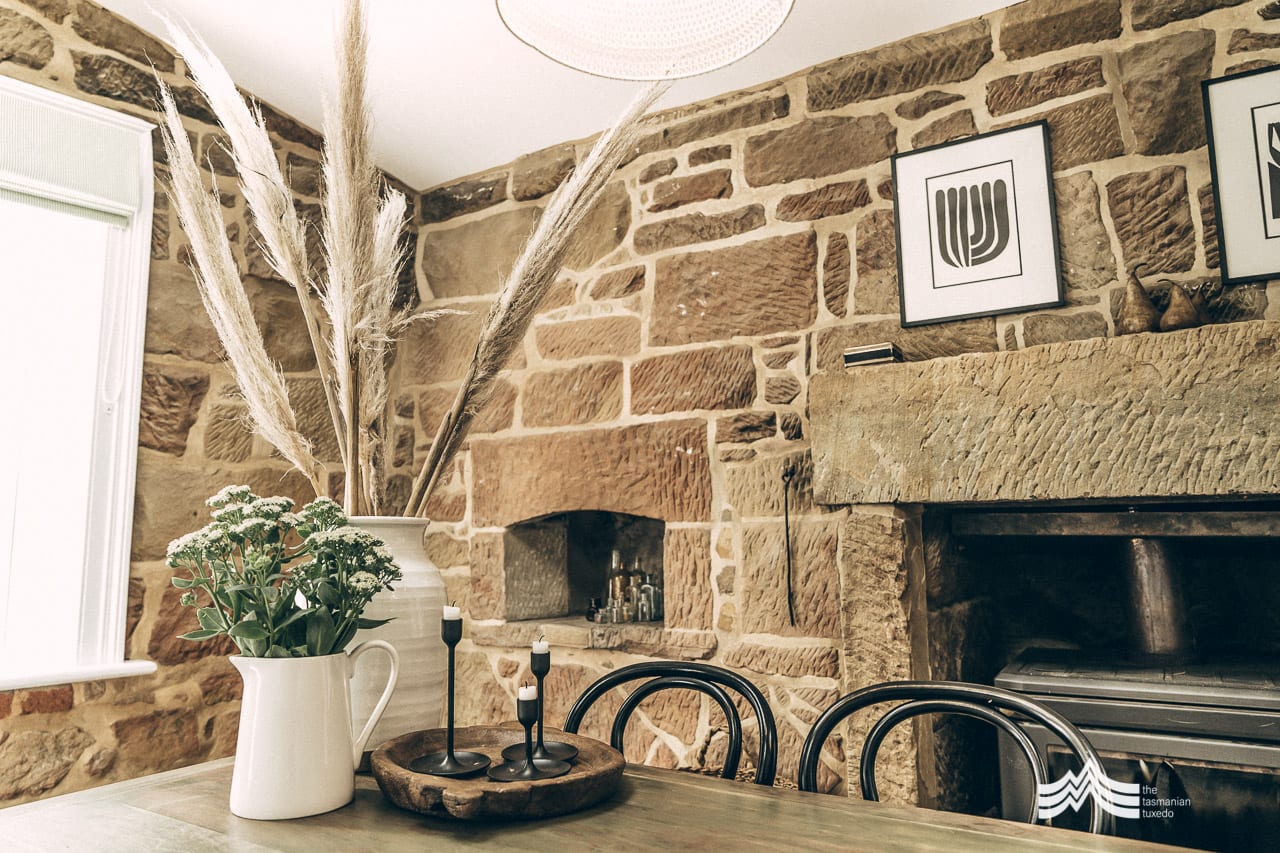 “In the early 1900s, the property changed hands a couple of times and was also partly destroyed by fire,” explains Sophie, gazing at the solid stone walls in the dining room. “After that, it was rebuilt as a single storey home and was likely used as a residence for the Button family. They were drapers, clothiers, grocers, ironmongers… and among the first storekeepers in the Midlands to import directly from England.”

As two year old William keeps Sophie and Nick entertained playing hide and seek, the story moves on to Ellen Game. She purchased the property for 600 pounds in 1933 and operated it as a maternity hospital until her death in 1944. If Raffah’s sandstone bricks could talk, they would undoubtedly hold tales both of new life and heartbreaking tragedy.

“We found some rusty surgical scissors whilst we were renovating,” recalls Sophie. “I’d love to know what their history was and how many lives were brought into the world in this old place. You’ll notice that it’s quite an unusual building too. Nothing is square…it’s full of angles.” Indeed, Sophie is right. A look down the beautiful timber hallway and it’s easy to spot the quirky slant of the walls against the old floorboards.

“Initially I thought it was going to be a real challenge to furnish,” Sophie recalls. “But it’s come together pretty well.” That it has. Sophie clearly has a gift for interiors and has painstakingly tracked down items sympathetic to the era, creating a warm and contemporary ambience that at the same time plays homage to the property’s rich heritage. 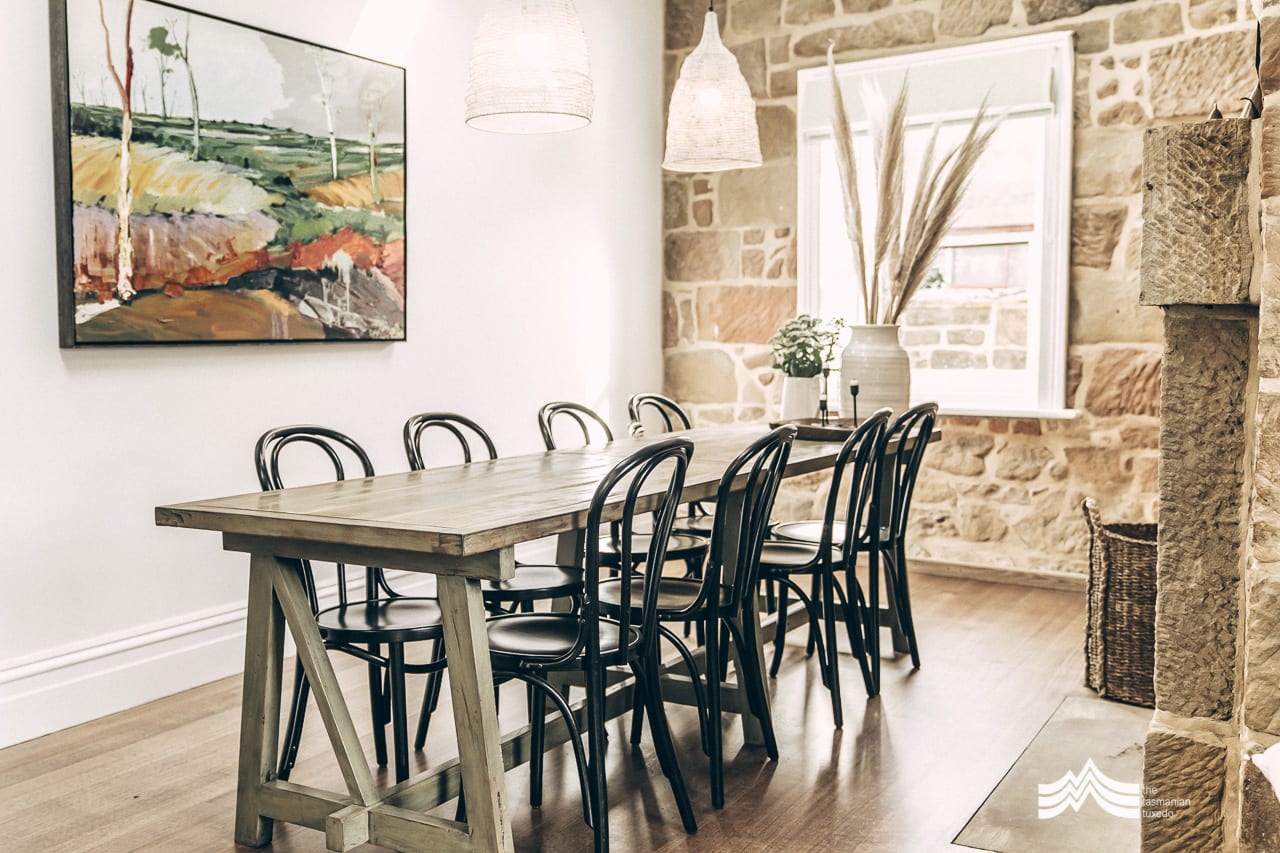 To say that the last two years have been busy for this hardworking young couple is an understatement. Working farm life, a full renovation and the birth of their two boys have kept the pair on their toes. “There was a lot of work to do here to the interior,” starts Nick, perched at Raffah’s kitchen bench. “We found both a local Tassie builder and a plasterer who specialise in historical buildings and also a local stonemason to help us repoint both the internal and external sandstone walls. It was important to us to work with tradesmen who understood the heritage values of the home. Oatlands is the sandstone capital of Tasmania, and there have been a number of local quarries operating nearby over the years. We invested significantly to keep these features and maintain the integrity of the building.”

“I’ve always wanted to indulge my passion for interiors,” grins Sophie. “And this certainly gave me that chance…even letting me do it whilst I had little kids.” Taking in the stunning surroundings it is hard to fault the warm country styling that Raffah House is quickly becoming renowned for. “From the outset, I wanted it to be relaxed and homely,” says Sophie. “We initially bought it as a place for my family to stay when they come to visit us, but now we welcome guests from all over the world and we’re having a great time introducing them to everything that Oatlands has to offer. It’s really a hidden gem…just an hour from Hobart and just a tad over that from Launceston means that it makes a great base to relax for a few days whilst you’re day tripping around Tassie.” 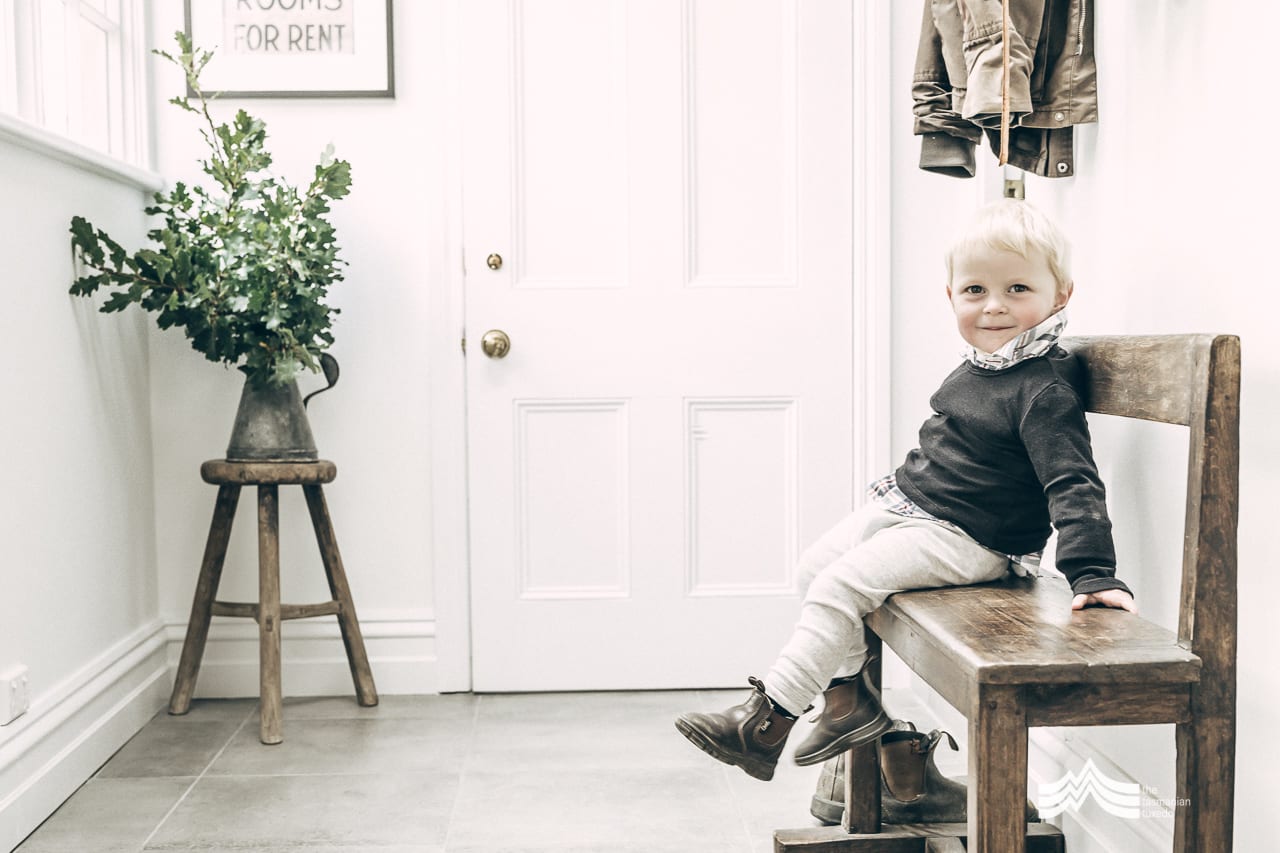 Raffah House is one of those special places that instantly invites you to unwind. Guest comments such as ‘…it was outstanding, as if it fell out of a magazine…’ are an apt description of Sophie’s decorating skill. From the modern take on a country kitchen, through to the rustic charm of the cosy lounge. It’s simplicity and elegance at its very best. Setting off the sandstone perfectly, are just the right balance of boutique Tasmanian timbers, carefully sourced antiques, and beautiful accents of country greenery.

Generous in both its size and proportions, Raffah House offers three beautifully appointed bedrooms. Two queen rooms are perfect for families or couples travelling together, whilst the third bedroom offers a luxurious king bed that can easily be split into twins to accommodate children. The cloud soft bedding and luxe French flax linen are indicators that Sophie has thought of everything to ensure you relax in comfort.

The open plan kitchen, lounge and dining room make Raffah sought after for girls’ weekends and family trips away. “It’s a great spot to cook up a storm and spend the evening in conversation with friends around the vintage style dining table. I know our guests enjoy the garden during the warmer months too. They’ll often take a bottle of wine outdoors and sit in the courtyard as the sun goes down.”

Nick and Sophie are part of a new generation keen to welcome visitors back to this quiet rural township. “There’s a lot going on here now, and it’s become a great mix of fresh ideas and local heritage. I think we’re going to see Oatlands squarely back on the map in the period ahead,” Nick says. “There’s so much history here…we have the largest number of colonial sandstone buildings of any town in Australia… it’s great to see people really starting to embrace a future in the Midlands.” 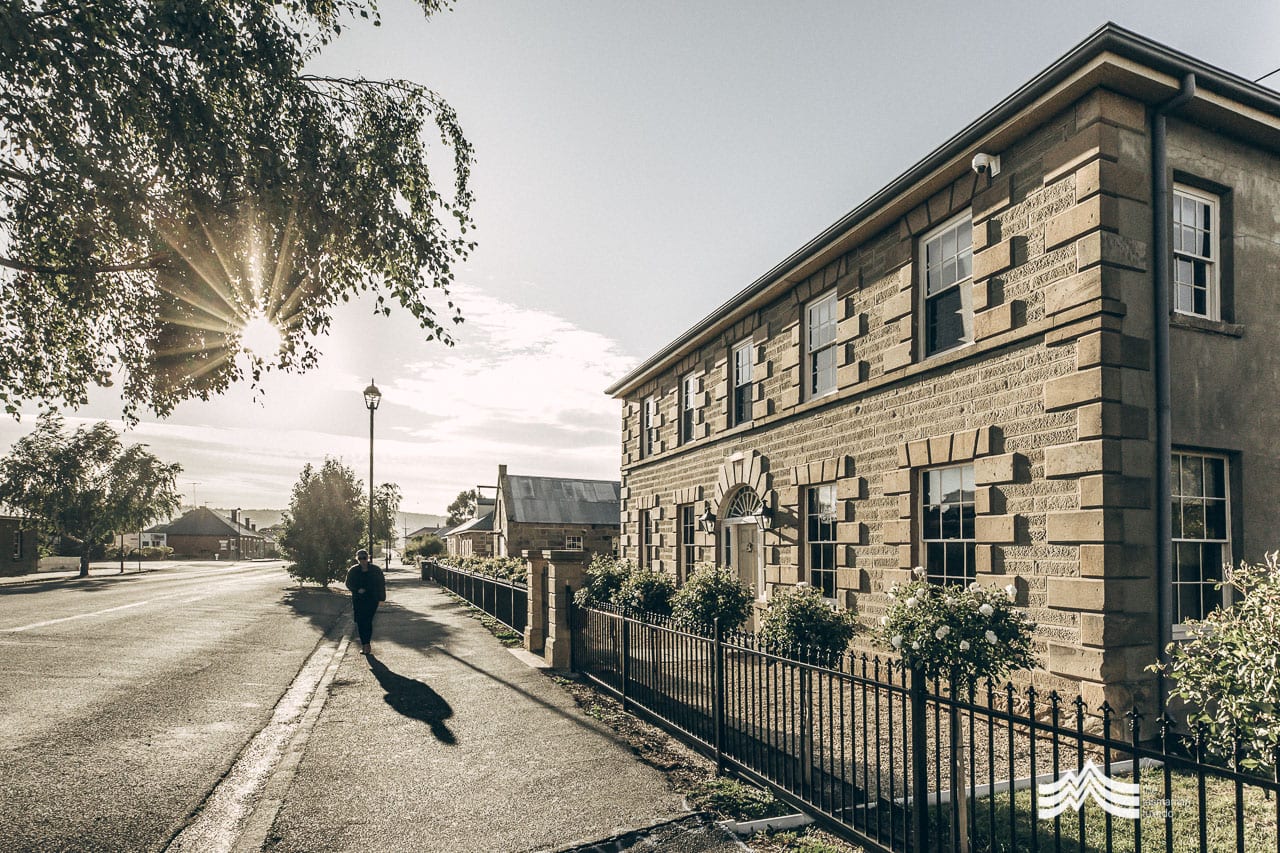 Sophie adds, “When you stand back and look at Oatlands, it is truly beautiful…it is actually the jewel in the Midlands crown. The amount of heritage buildings lining the main street is pretty breathtaking, and I think it’s a far nicer streetscape than what’s offered elsewhere. Tourists are discovering its charm and we are beginning to see some serious investment within our gorgeous little town.”

Oatlands boasts a story at every turn. From the home of Solomon Bay, Tasmania’s most feared hangman, through to Callington Mill, the only working 19th century tower mill in the Southern Hemisphere…it’s all here and within easy walking distance of Raffah’s front verandah.

Watching William harvest cherry tomatoes straight from the kitchen garden, this friendly pair lock eyes when asked about the whirlwind of the past few years. “We met at the country races in Longford in 2012,” laughs Sophie. “Life’s been pretty busy ever since but we wouldn’t change anything…it suits us down to the ground and we’re just loving watching our boys grow up in this great little town in the heart of Tasmania.” 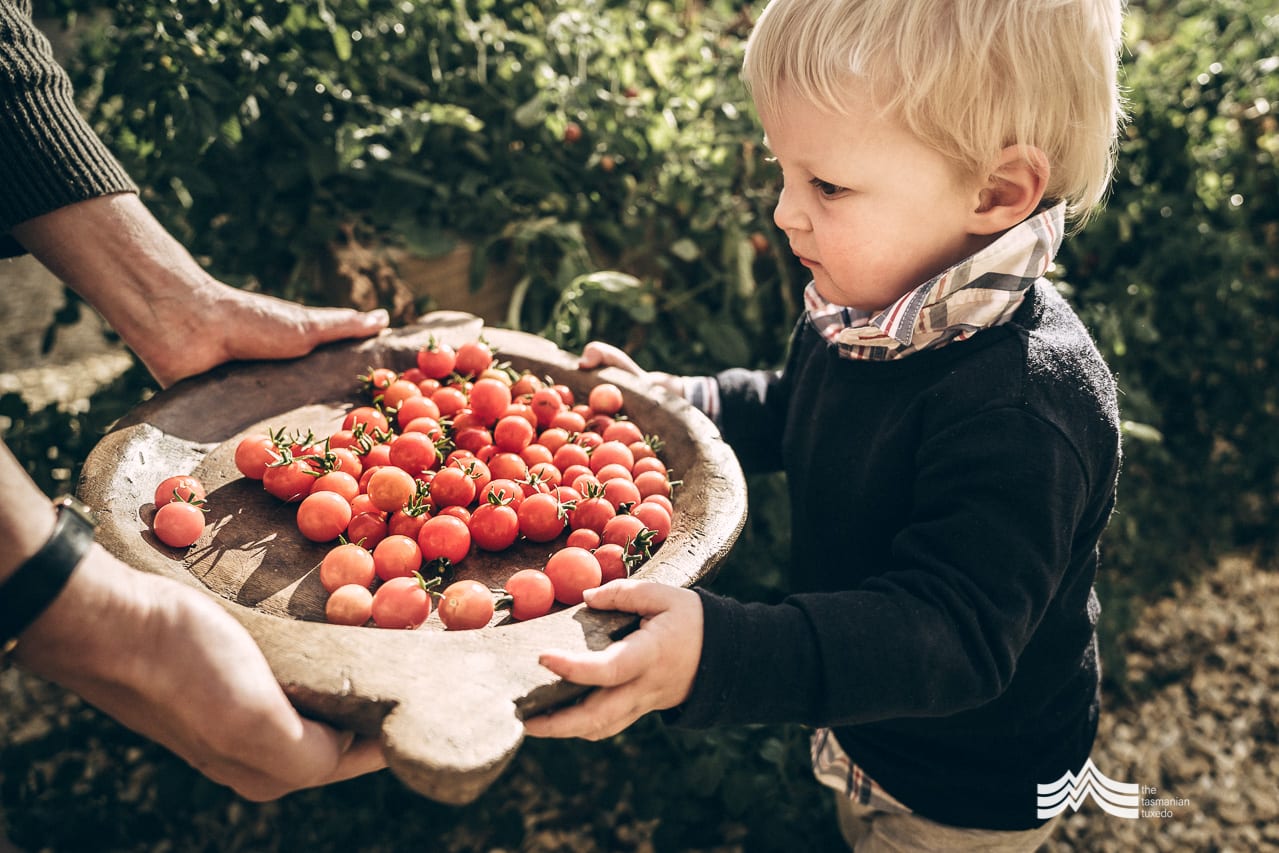 Start planning your stay at Raffah House by visiting the website, or by following the property on Instagram.