#32 Bridges of a bygone era 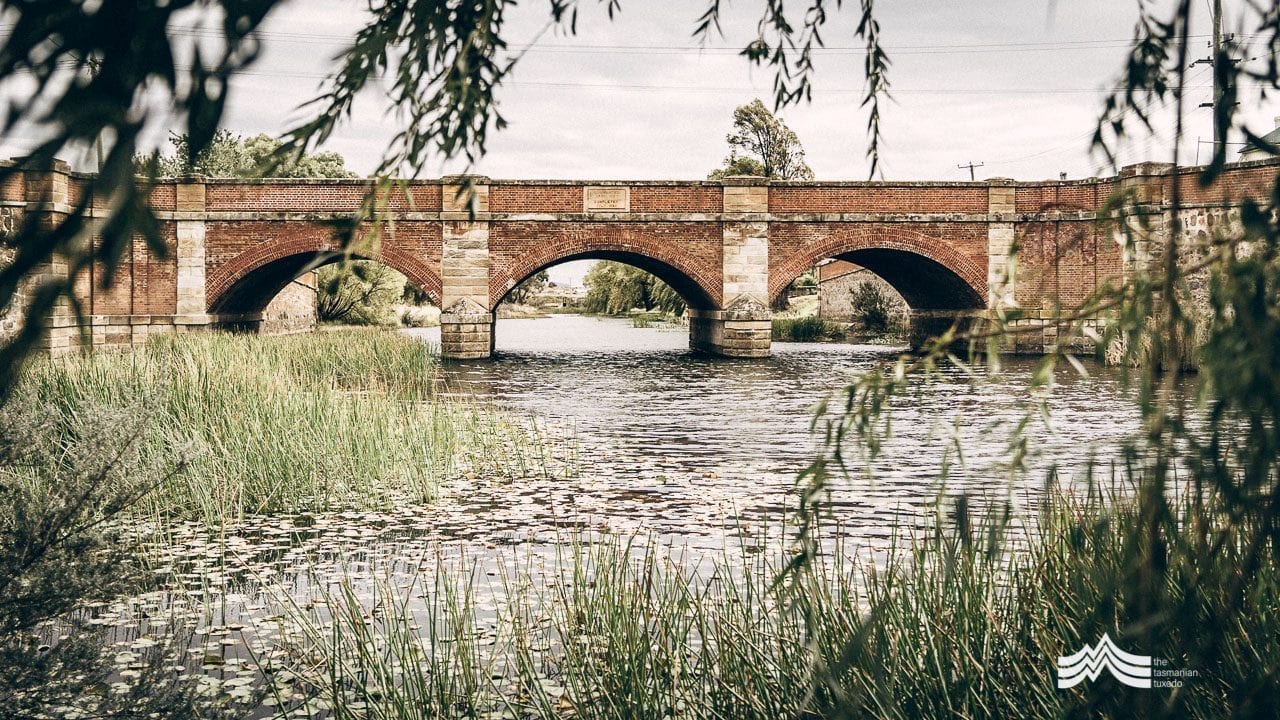 Tasmania is home to three out of four of Australia’s oldest bridges. They stand as solemn reminders of the convict labour that carved the colony over a century and a half ago. There is little doubt that Van Diemen’s Land was an island of suffering. Convicts were dispatched by the British Empire, often for the term of their natural lives, and harsh discipline was dished out in the form of manual labour, violent lashings, and time in leg irons.

If only those sandstone blocks and ageing red bricks could talk, what tales of hardship and tragedy they must surely hold. No doubt they also mask tales of Tasmania’s Aboriginal people who were either killed or displaced from their homes as white settlement moved in. There was often little regard for the natives and attitudes of the time saw Tasmania’s indigenous population decimated both by conflict and the spread of infectious disease.

Out of this torrid history in the early half of the 1800s rose numerous examples of elegant colonial architecture that remain in use today. Three significant bridges cross tranquil rivers en route from Hobart to Launceston, sharing not only a working ability to guide travellers safely but remaining as testaments to both engineering and creativity. 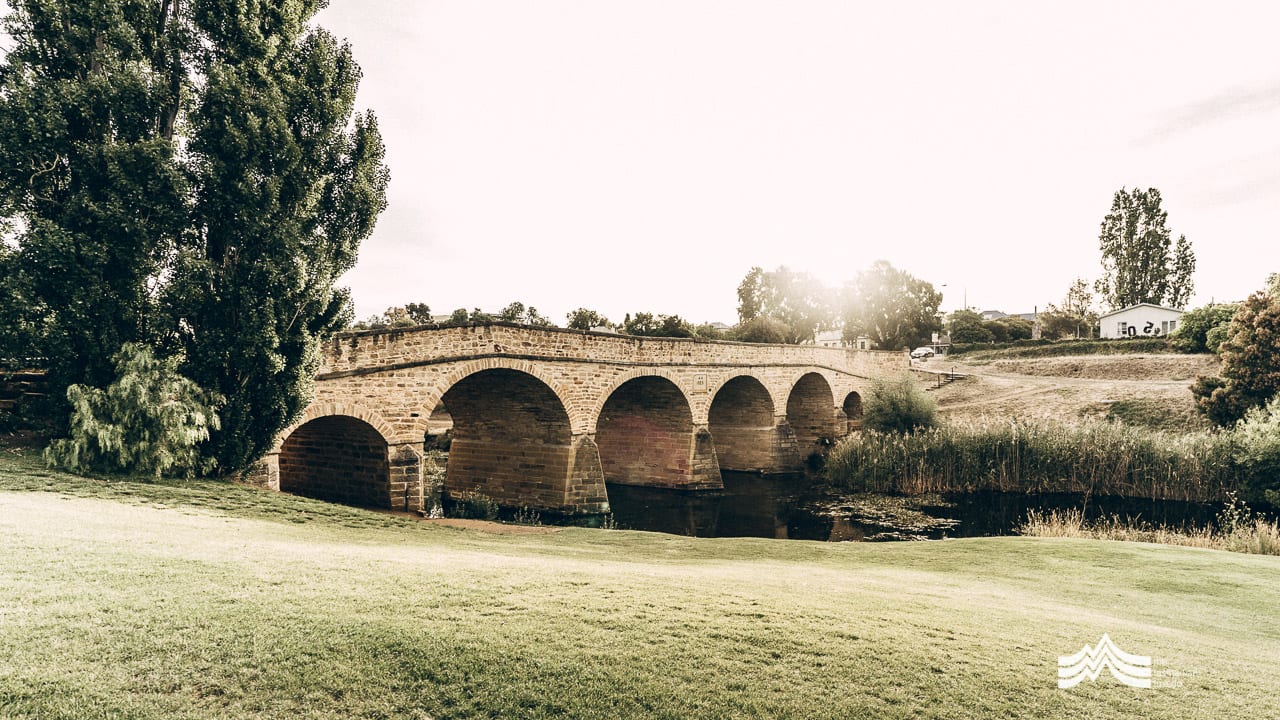 Perhaps the best known is the Richmond Bridge, spanning the Coal River some 25kms north of Hobart. It is widely considered the oldest stone span bridge in Australia and the oldest bridge in the country still in use. With four solid primary arches, it remains in excellent condition and was added to the National Heritage List in 2005.

Originally named Bigge’s Bridge after Royal Commissioner John Thomas Bigge, this iconic piece of Tasmanian architecture was influenced by many European fathers. Under the watchful eye of Colonial Superintendent of Stonemasons William Hartley Wilson, and the overall direction of Major Thomas Bell who commanded the Hobart military garrison, the bridge took shape following its foundation stone being laid in December 1823. Construction was completed in January 1825. Wilson’s great-great-grandson, along with other descendants, completed a detailed history of the bridge in 2007. You can read more about their research and intriguing findings by following the link provided below.

Whilst well known for its picturesque location, the Richmond Bridge is home to many sinister tales including that of George Grover. Said to be just one of many souls to haunt the bridge and its surrounds, Grover himself had been transported to Van Diemen’s Land for stealing but worked his way into a position of power in the Richmond Goal. Grover’s duties include flogging the prisoners with a ferocity that is said to have left him widely disliked. He is famed for having ridden on the heavy carts full of local sandstone that were dragged along by the convicts and for whipping the prisoners like horses. Legend has it that one evening he fell into a drunken slumber atop the bridge and was pushed to his death. Perhaps fittingly, no one was ever convicted of Grover’s murder.

Grover’s shadowy form is often reported on the bridge itself or in the area surrounding it. The ghost is referred to as aggressive and even known to follow people back to their homes and to linger for a while. The form of a small black dog, ‘Grover’s dog’ is also frequently mentioned, although thankfully it is always reported as friendly, unlike its more sinister master.

In the early 1800’s, Richmond was a significant stopover point for those travelling from the Derwent Valley and Hobart through to the east coast and the Tasman Peninsula. Convict labour, an increase in agriculture and a boom in the Tasmanian population saw Richmond become Tasmania’s third largest town. Today this little country hamlet favoured by day trippers sits much like a snapshot in time. Its streetscape of colonial cottages, Georgian manor houses and antique wares harks back to a bygone era and it’s easy to wander the streets and imagine the vehicles of today replaced with horses and carts of yesteryear. 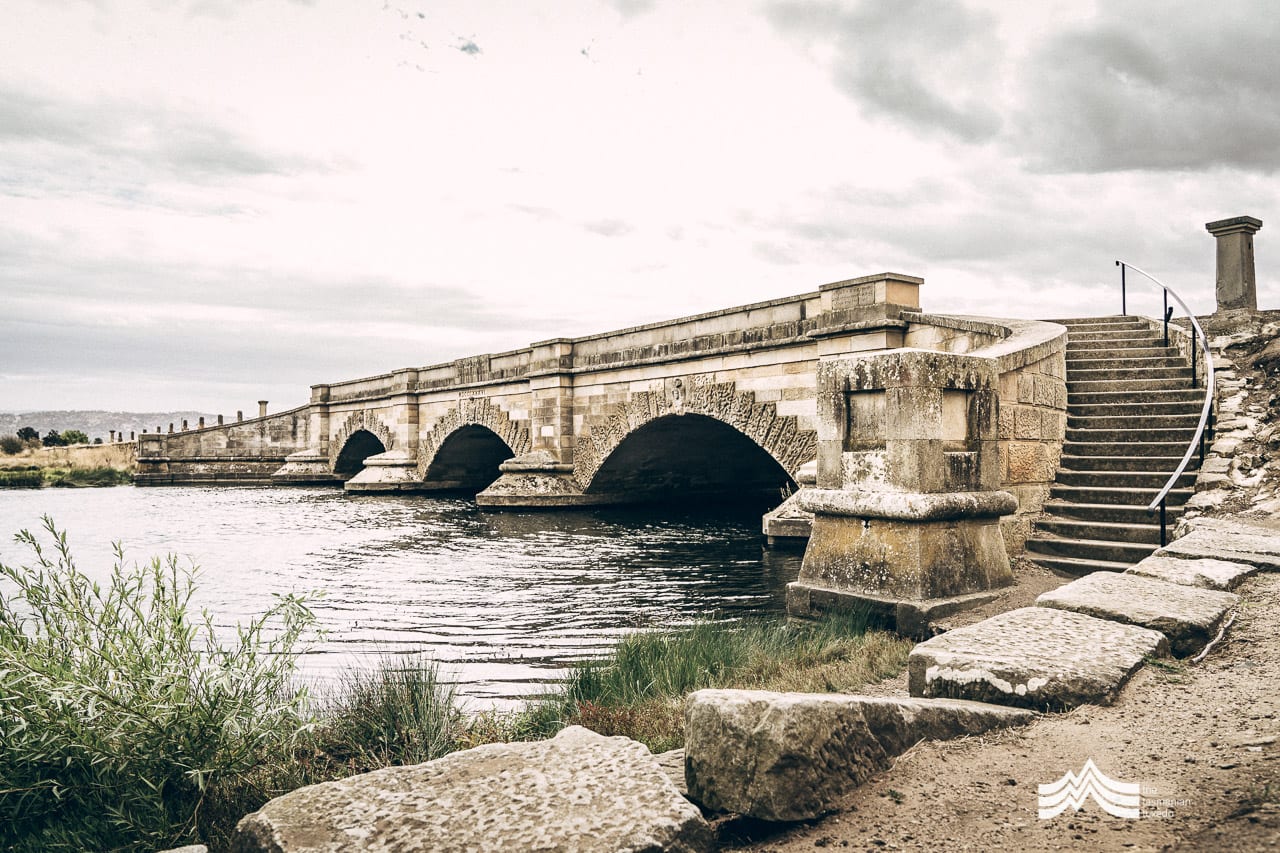 In 1830 Governor Arthur commissioned a replacement for the wooden bridge at Ross, at the time a thriving colonial outpost in Tasmania’s midlands. Although convict chain gangs quickly set about quarrying the required stone, no bridge appeared for some time as the local settlers commandeered the stone for their own homes. There was a shortage of skilled labour at the time and the gentry set about making the most of what was at hand. Indeed, the township of Ross grew significantly during this period.

Unimpressed with the lack of progress, Arthur sent in Danish constable Jorgen Jorgensen to clean up the town and oversee the bridge’s development. Problems continued however, until eventually out of frustration two convict stonemasons Daniel Herbert and James Colbeck were dispatched to work on the bridge. It appears that the carrot of freedom upon the bridge’s completion was enough to get the job done. The new bridge was finally opened by Arthur in October 1836. 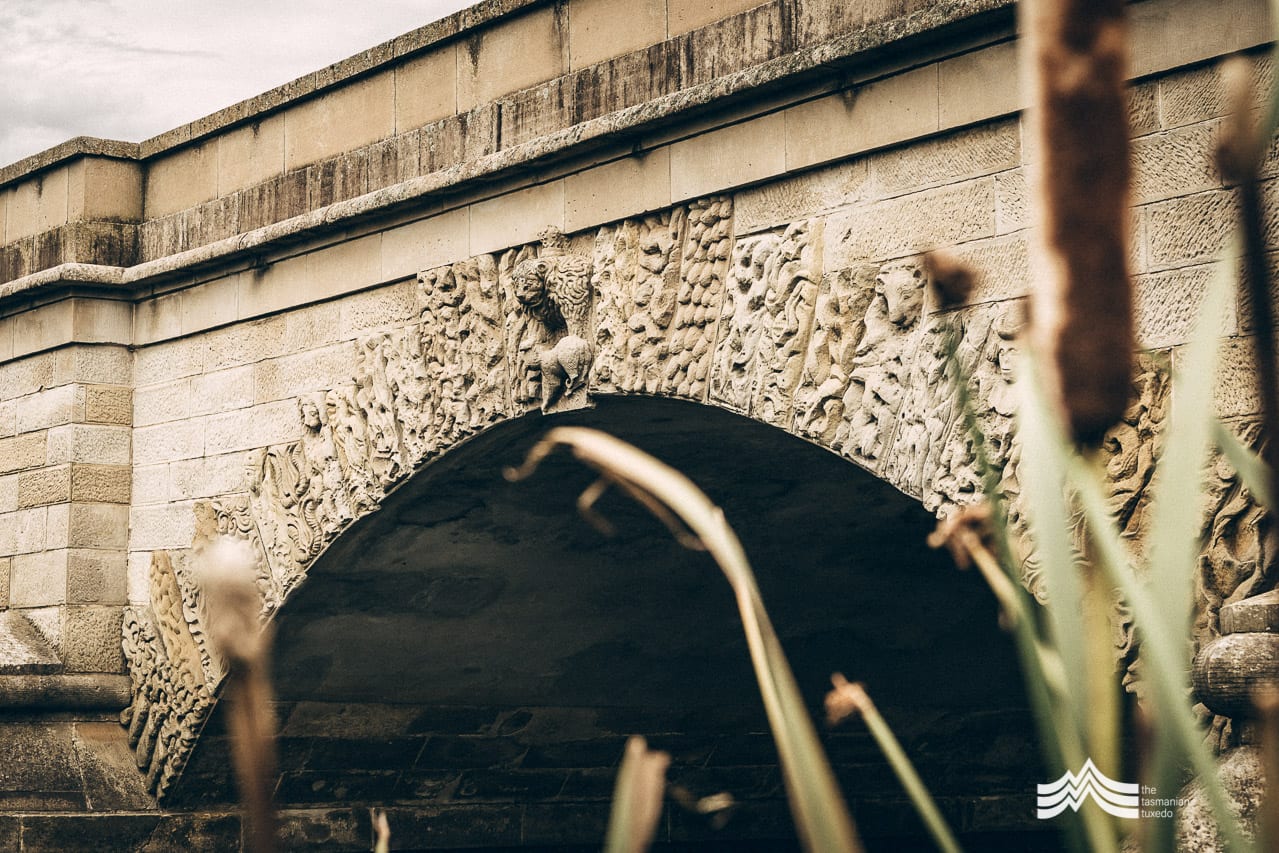 Mystery still surrounds the intricate carvings that adorn the Ross Bridge. Beautiful Celtic patterns, animals, plants and various likenesses of local personalities of the time are evident across every arch. This mastery of carving remains unrivalled amongst convict workmanship of the time and is generally attributed to Herbert himself. To this day, mystery surrounds how the carvings came to be. Who approved the creative works and just how they managed to keep them secret for such a long period remains lost in time.

Today the riverside village of Ross often goes unnoticed by travellers. Bypassed in the 1990s by the Midland Highway, one must make a decided detour in order to visit this beautiful little township. Efforts are well rewarded however, with quaint cobblestones, stunning Georgian architecture and grand elm trees lining its peaceful streets. You can even visit the century old bakery that is still operating with its original wood fired oven. The vanilla slices are legendary. 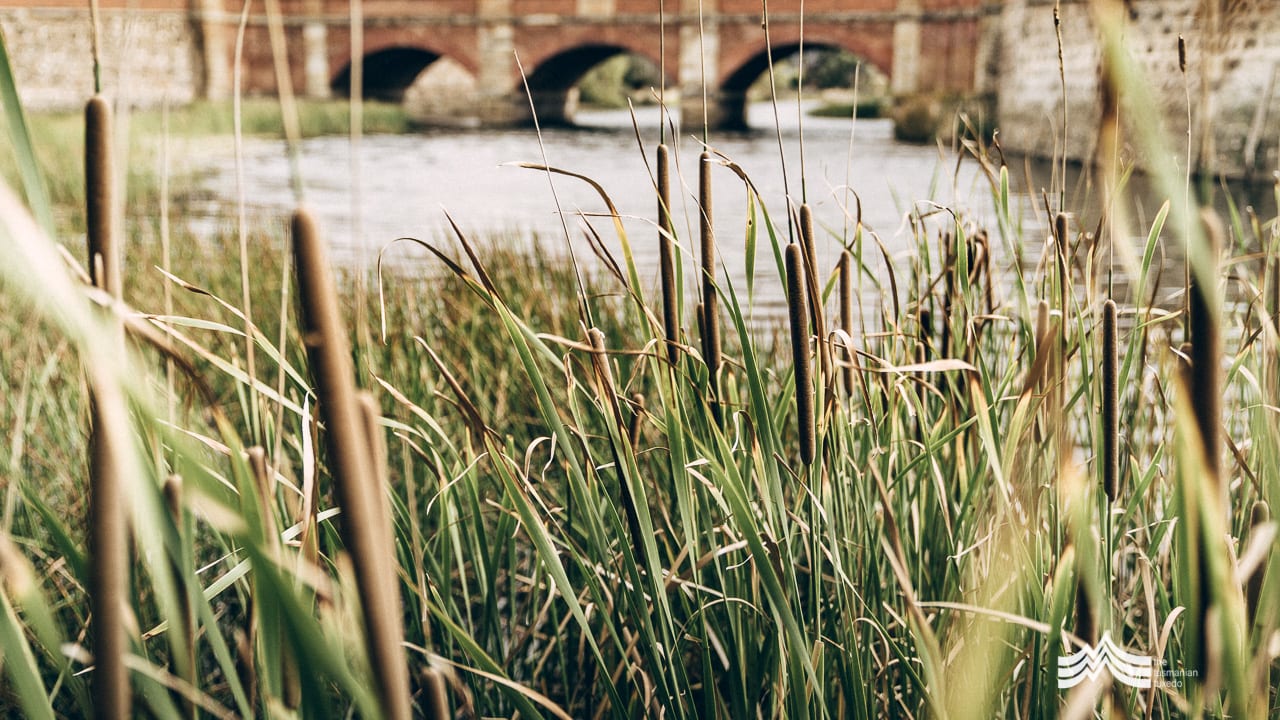 On the very same day Arthur opened the new Ross Bridge, he announced a new build to aid the crossing of the Elizabeth River in Campbell Town, just 12km to the north. Campbell Town was also an important stopover when travelling the length of the state, with soldiers reporting directly to their headquarters in Ross. Whilst also constructed from penal labour, this bridge differs in its construction from its counterparts as it is built from over 1,250 000 locally made hand-cast bricks.

Taking its name from its colour, the Red Bridge is the oldest surviving brick arch bridge in Australia, as well as the oldest bridge on the National Highway. Originally built to carry horse and cart, today it carries over two million vehicles each year via two lanes, as well as continuing to enable pedestrian passage.

Stand for a moment to admire its solid design and you’ll quickly notice its three arches of red clay bricks, ably supported by sandstone piers. There are also five stone tablets in the parapets marking the distances to Hobart and Launceston, its start and completion dates, the contribution of Captain Alexander Cheyne who oversaw its construction, and recognising the official opening by Lieutenant Governor John Franklin in 1838.

Most interestingly, the Red Bridge was constructed on dry land. Following its completion in 1838, the Elizabeth River was diverted to allow its waters to run under the new arches. A new river course was dug a kilometre on either side of bridge to ensure water flowed beneath. 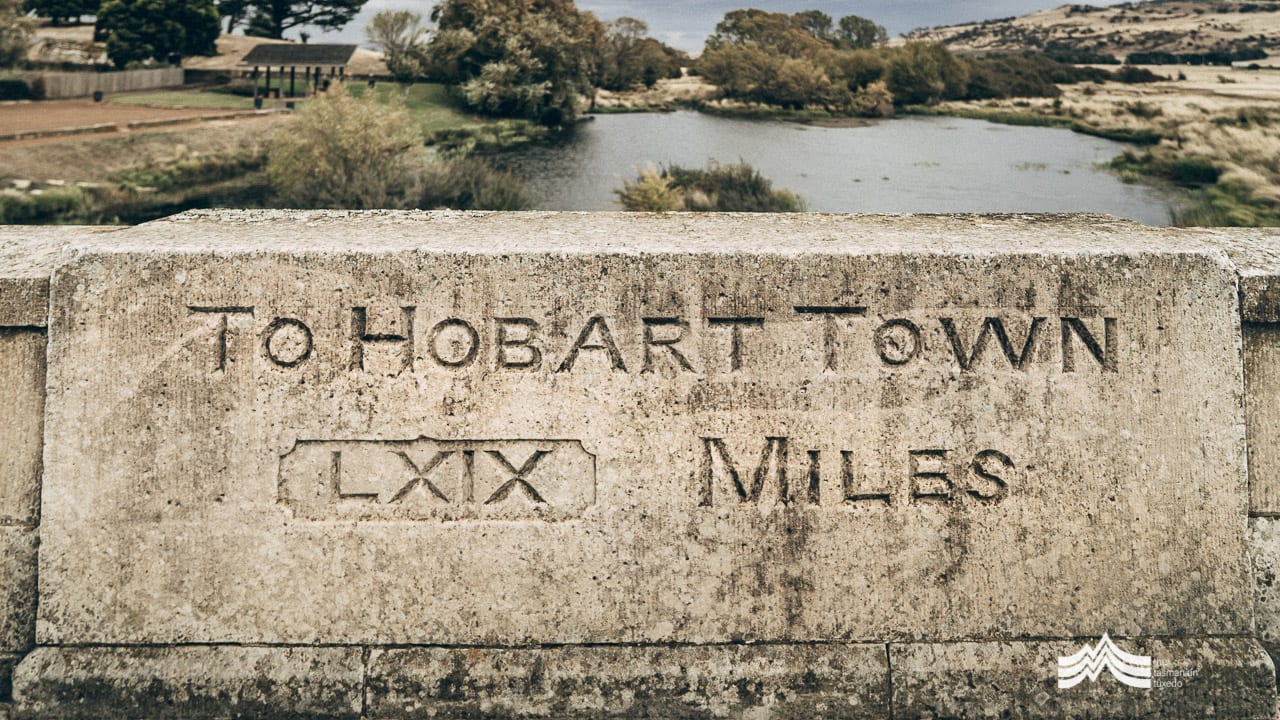