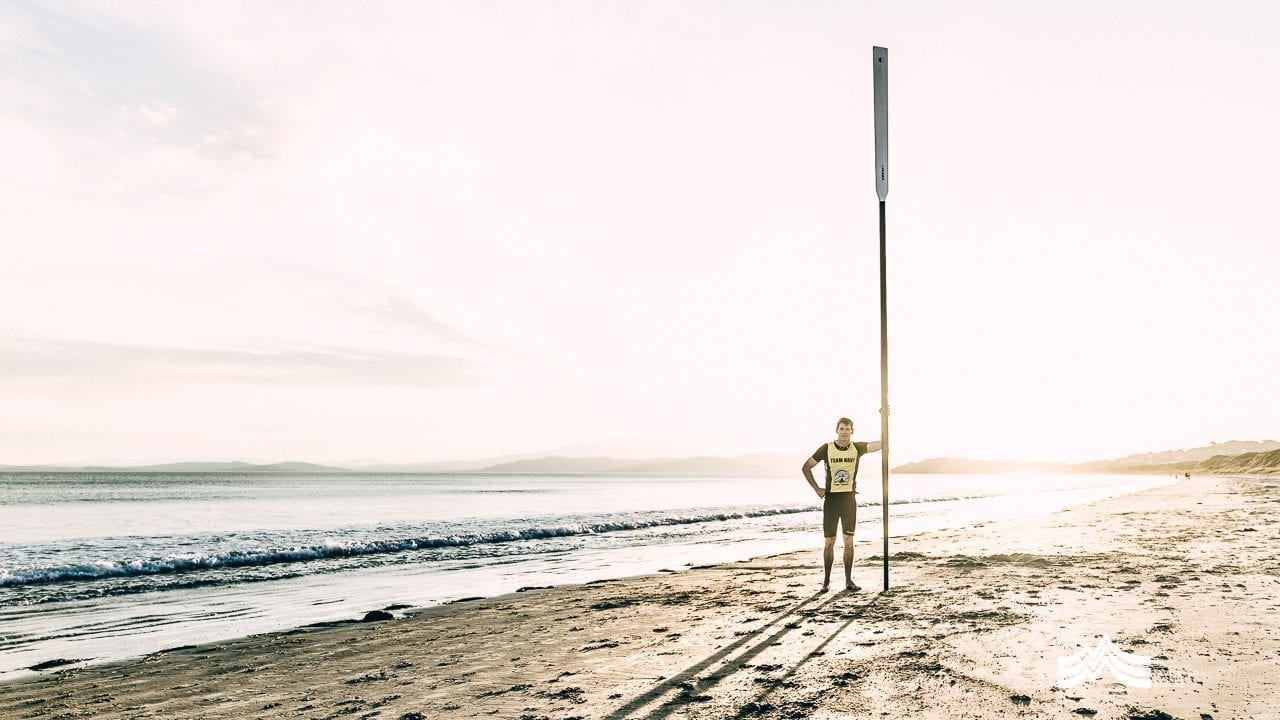 Though the mention of surf lifesaving usually conjures up images of golden Queensland beaches, this iconic Australian movement is alive and well right here in Tasmania. Whilst the conditions faced at 42 degrees south are certainly different than those experienced by our northern counterparts, the passion and dedication for the sport here in Tassie remains unwavering.

The opening of the 2018/19 surf sports season in Tasmania was marked as it has been for half a century, by the Mercury Surf Safari. This season saw the event celebrate its 50th anniversary – a milestone representing decades of sweat, challenge and mateship.

The 1968 Surf Safari was the brainchild of the late Eoin McDonald, inaugural president of Park Beach Surf Life Saving Club and a legend of the sport in local circles. An endurance event on the Derwent River in the heart of Hobart, the Surf Safari has stood the test of time to remain a firm fixture on the annual surf sports calendar. It continues to signal the time to dust off boards and paddles and find out who’s kept their training up over Tassie’s cool winter months.

The original course was a tortuous 42km journey that saw surf boat rowers and ski paddlers race from Hobart’s Domain to the seaside township of Lewisham via Ralph’s Bay Canal. The canal, a short channel that links the city’s eastern shore suburbs to Frederick Henry Bay, acted as a shortcut to the competitor’s final destination. In an amazing twist, upon reaching the canal, crews and paddlers had to carry their craft across the land in order to reach the bay beyond. The celebrations at the old Lewisham Hotel are legendary and hold a special place in the hearts of many. 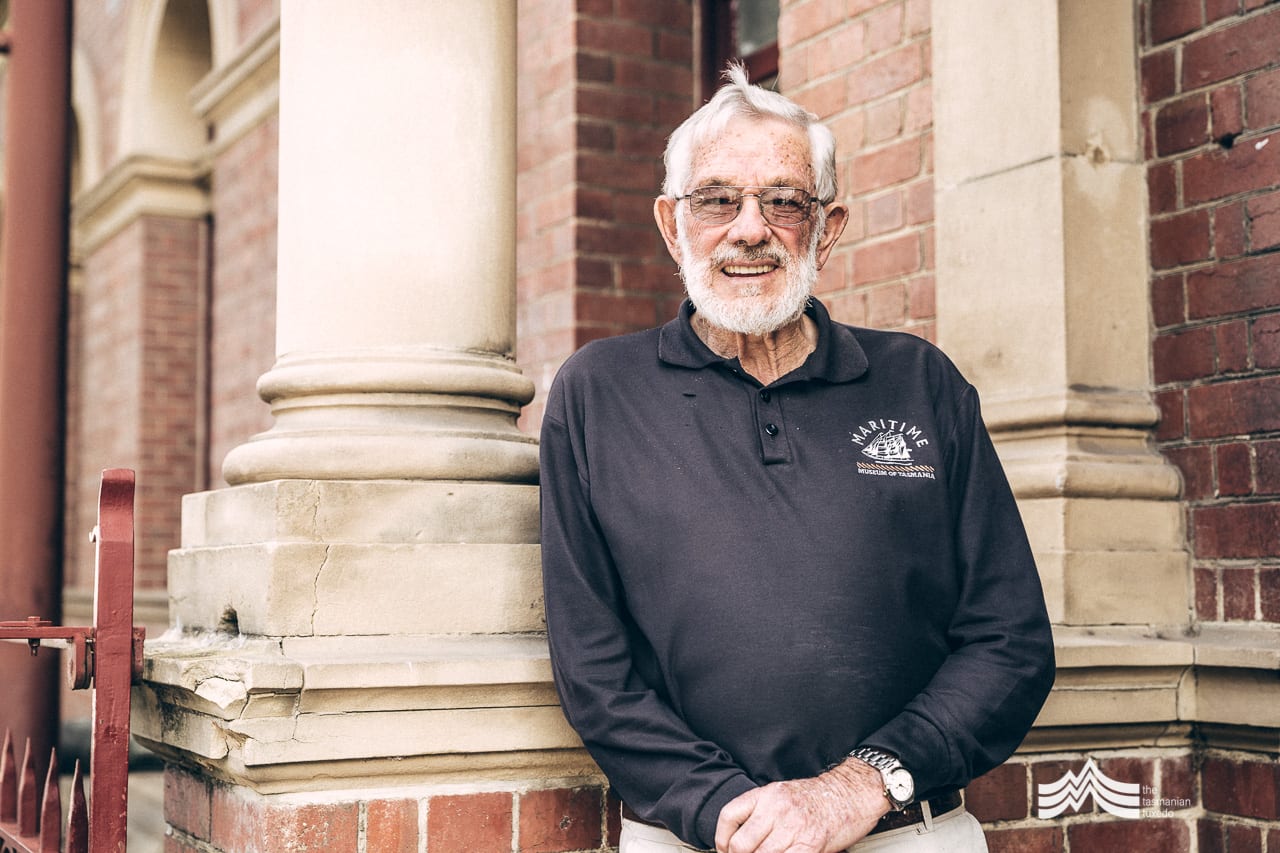 John Spooner recalls his role in some of those early races. “I was roped into the club as a swimmer but got involved in boats pretty quickly. Back then our club was Hobart Carlton…we later merged in 1975 with Park Beach to form what’s now known as Carlton Park.” John grins as he remembers the friendly but fierce rivalry in those early days, “I swept in one of the early Surf Safari’s and have great memories of those times. My retirement from the boats came in 1972 after winning the ‘A’ boat state title from Park Beach.”

A surf boat crew consists of four rowers and a sweep, whose primary role is navigation. “I rowed until ’65,” explains John, “Then I turned my hand to sweeping. I remember in the ’71 race we got to Seven Mile Beach and there was a really hot northerly blowing. I took over for a row for a while as one of our guys had had the flu and wasn’t so good. You just did what you needed to do in order to get through the race.”

John recalls the early days of life saving in Tasmania and the hot competition that existed between rival clubs. “We loved rowing at Park Beach. The waves could be really beautiful, but most of all we loved beating them,” he laughs. “It was always a joy to beat the Park Beach boys and the competition for things like the Pembroke Trophy was always fierce.”

“There were some real characters in the sport back then,” John remembers fondly. “The conditions could be terrible and you just never knew what some of the guys would get up to. There was always lots of controversy and even the occasional punch up,” he laughs.

“We trained a couple of times a week and used the sea breeze to test ourselves. We’d row into the wind to help build up our strength, then run the waves down and row back to the shed.” 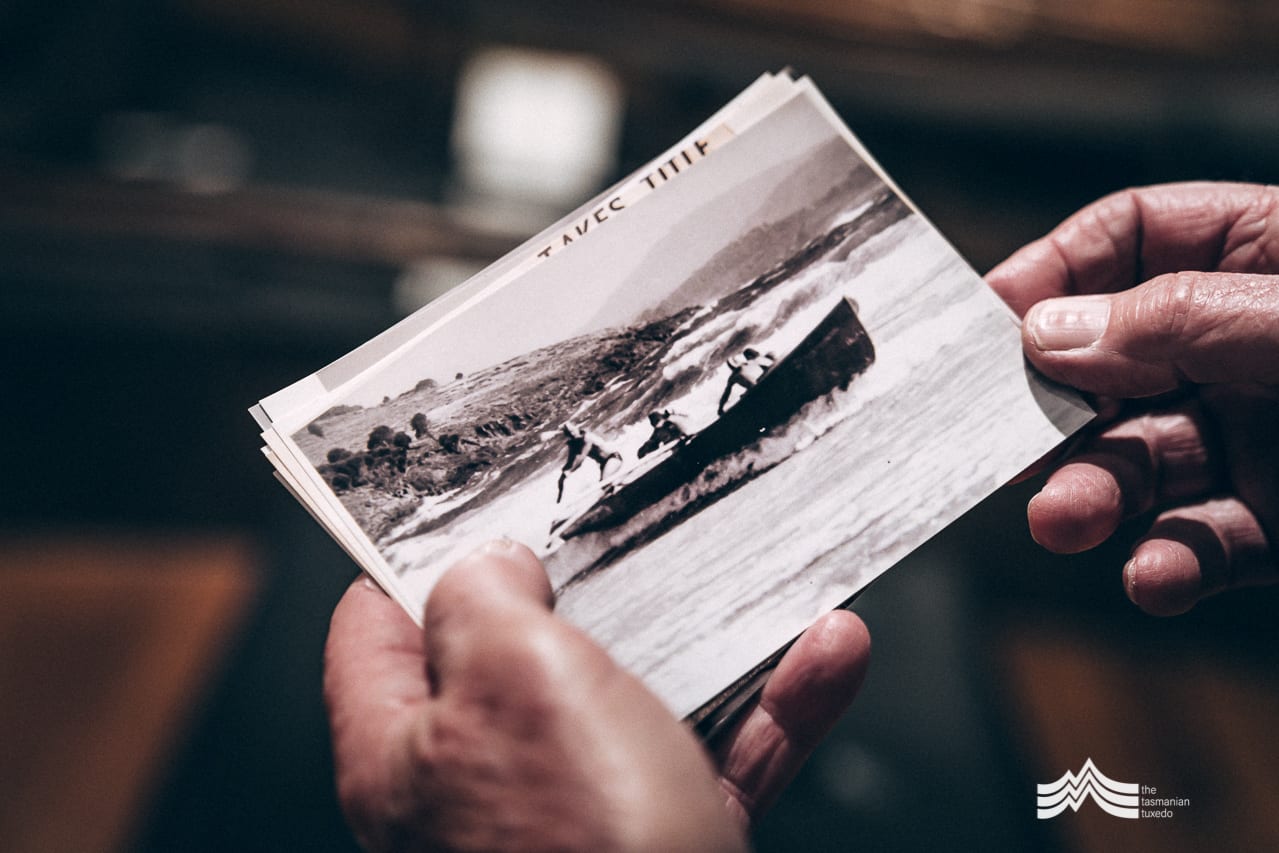 John talks openly about the lifelong friends made through surf lifesaving in Tasmania. “I’ve got great memories of the old Musset Hut clubhouse at Carlton, and then a group of us building the new weatherboard one. Competitions were always fun and I made mates for life. Even today when we catch up…you just pick up where you left off. We always enjoy a beer and a chat.”

The Surf Safari course has been altered numerous times throughout its colourful history. In 1975, to allow for greater spectator involvement on the river and to account for the Tasman Bridge being down, the start was moved to Long Beach in Sandy Bay and competitors hugged the western shoreline as they raced to Kingston Beach before returning to the finish at Nutgrove Beach. A further change was made in 1979 to see boat crews and paddlers travel to both sides of the river. This period also saw the introduction of a run along Bellerive Beach on the eastern shore.

Various other course changes have been made over the years, morphing into the event enjoyed today – a 21km endurance event that continues to attract competitors from across the country. Its honour boards are adorned with some of Australia’s most decorated life savers as well as Olympic, World and Australian Champions. In more recent times, the Surf Safari has expanded to include sea kayaks, multisport craft, boards, outriggers and stand up paddleboards to become a true festival of paddling and rowing.

Gold medals were hotly contested in the special anniversary year. Taking out the Men’s Open Boat race was a crew of southern favourites from Carlton Park. Crew sweep Paul Chamberlain says, “It’s a long, challenging race. It can be mentally very tough on the rowers, maybe even more so for my rowers as I don’t think I talk as much as other sweeps do.” 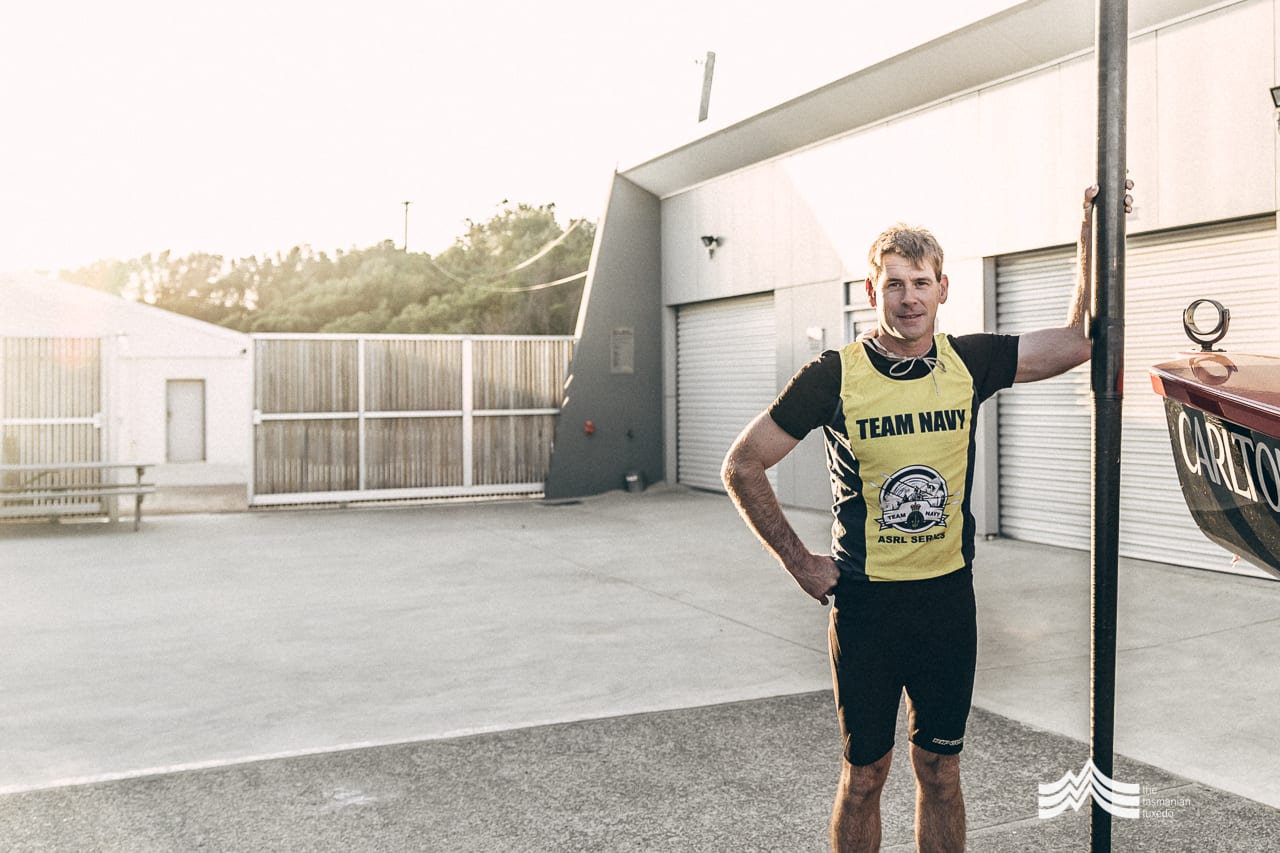 Paul and his crew’s success comes off the back of an extra level of difficulty. Paul has been deaf since birth. Relying on his hearing aids he can make out about 23% of a standard conversation, however without them this is reduced to zero. “I don’t wear my hearing aids in the surf,” Paul explains. “Even though I don’t have any hearing without them, the guys and I can still communicate. We work around it and it’s fine.”

This extra challenge does nothing to dampen Paul’s passion for his sport. He loves the camaraderie of life saving and is no stranger to stepping in wherever he’s needed. With a reputation for loving the spotlight, he’s particularly prone to delivering long and thoughtful speeches to mark special victories. Ironically, despite his hearing impediment he’s often the first to be called upon to say a few words on his crew’s behalf.

Paul’s hearing has proven no barrier on the water. “I can lip read extremely well so I can understand what the crew are saying to me. They are all facing me in the boat so that’s obviously useful. I can keep things on track by talking to them, indicating direction with my head movements and by using eye contact. We all know each other pretty well so it works fine.”

Getting into swimming at just four years of age, Paul’s prowess as a pool swimmer saw him hunted down by Carlton Park over twenty years ago. “My grandfather got me into swimming,” Paul explains. “He lived just near the Clarence Pool and used to take me over there all the time. I turned out to be pretty good in the pool and swam in competitions right through until I turned 18, and then got into surf swimming. My hearing has never slowed me down in the water.”

Originally recruited to boost the club’s swimming ranks, Paul quickly found himself drawn to the boat arena. “It’s such a spectacular event to watch when the surf’s up,” Paul describes. “I jumped at the chance to get in the boat and have a row.” 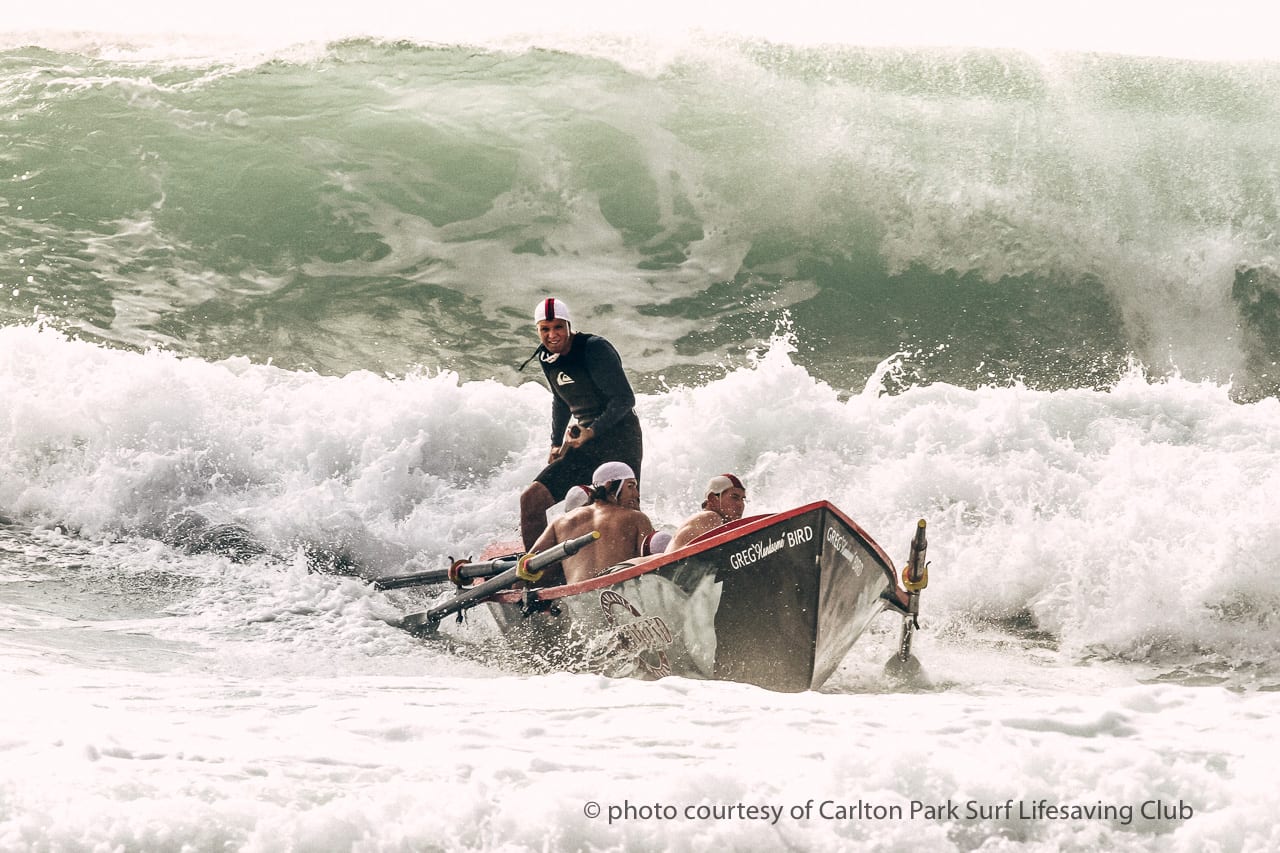 After serving five years of a ‘boatie’ apprenticeship, Paul was approached to take charge of a crew and try his hand at the role of sweep. “At the time we were short of sweeps…it’s a hard role to fill. It’s probably turned out really well for me as I don’t really have the traditional build of a surf rower, as I’m more of a lightweight. I’ve really enjoyed sweeping and I love the challenge of navigating the ocean,” Paul says thoughtfully. “It can get pretty tricky out there when the swell’s up.”

Whilst boat rowers are prone to hands full of blisters, the challenges differ for the sweep. “Particularly in an endurance event, things are different for me than for the rowers. My job is to navigate and hold the boat steady. Whilst a 20km event doesn’t give me blisters, I am prone to muscle cramps and also the cold. It’s a long way, especially with the wind chill factor thrown in.”

With numerous state surf boat rowing titles under his belt, Paul cites his biggest accomplishments as a silver medal in the Australian Surf Rowers League at Shellharbour in NSW, and making the finals at the Australian Championships in 2016 and 2017.

“By nature of the conditions, surf sports are unpredictable…that’s part of the attraction. There’s always something that goes a little wrong in the Safari,” grins Paul. “This year we got a turning buoy muddled and actually ended up rowing an extra few kilometres. It’s not called Australia’s toughest endurance event for nothing!”

“It’s pretty amazing to think the Surf Safari has been going for 50 years,” muses Paul. “Although the course has changed, what brings people to the race hasn’t. It’s about testing your endurance, the mental challenge and about great teamwork.”

It’s clear Paul is deeply entrenched in surf club culture. “Our club has become an extended family to me,” he explains. “I have so many mates and everyone looks out for each other. It’s given me so much.” Training multiple times a week and spending hours patrolling southern beaches in the summer months, Paul’s no stranger to teamwork, “It’s great being part of a team and working together. We all do our bit and have a lot of fun along the way. I’m really proud of what our club has achieved, it’s pretty special.”

Paul’s enthusiasm for all things surf related is now being passed onto his younger club mates. “I’m sweeping for a young crew at the moment,” he explains. “It’s great to see more young guys coming through the ranks. Hopefully we’ll see them in multiple Surf Safari’s too.” Pausing to reflect upon the tradition that has spanned half a century on the Derwent River he says, “I’d love to see the Safari still going in another 50 years.” 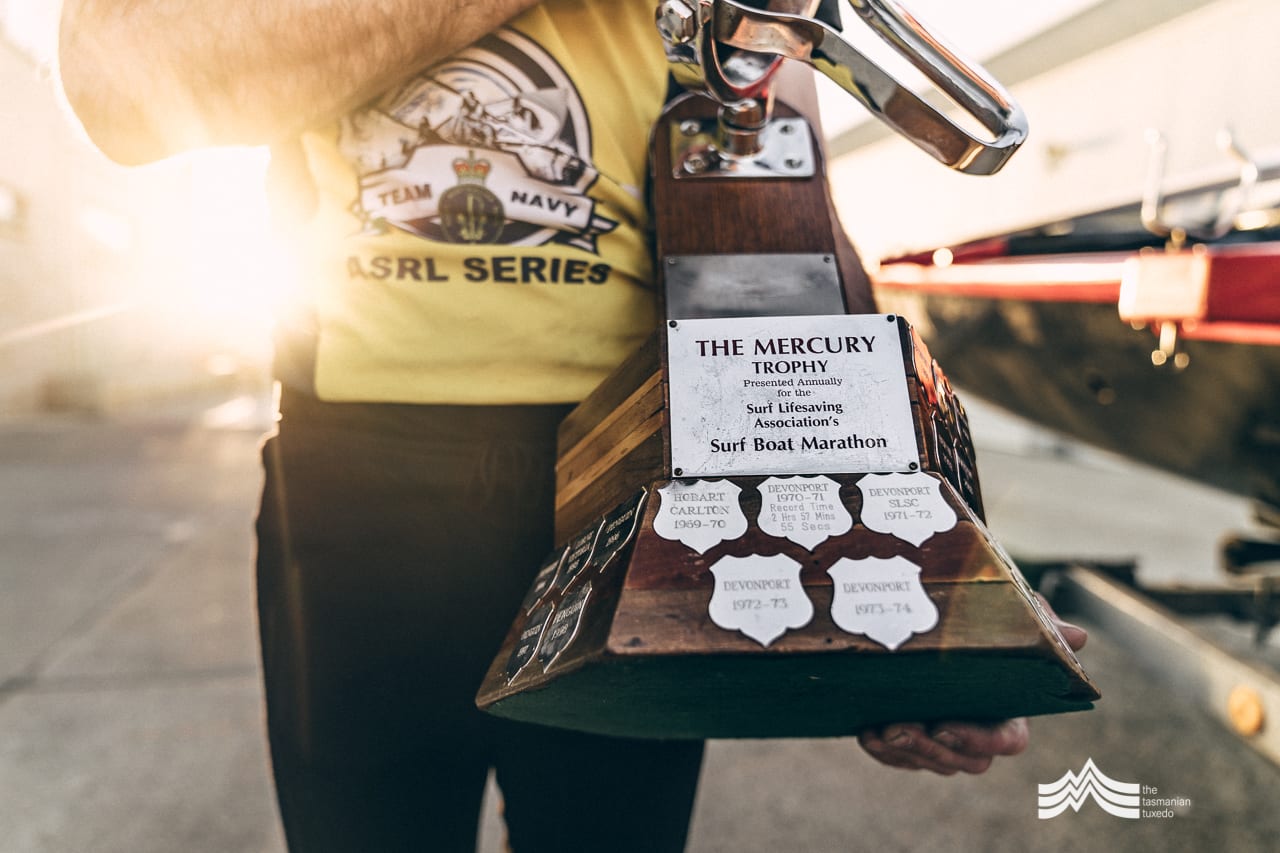 Keep up to date with the Surf Safari via Facebook.