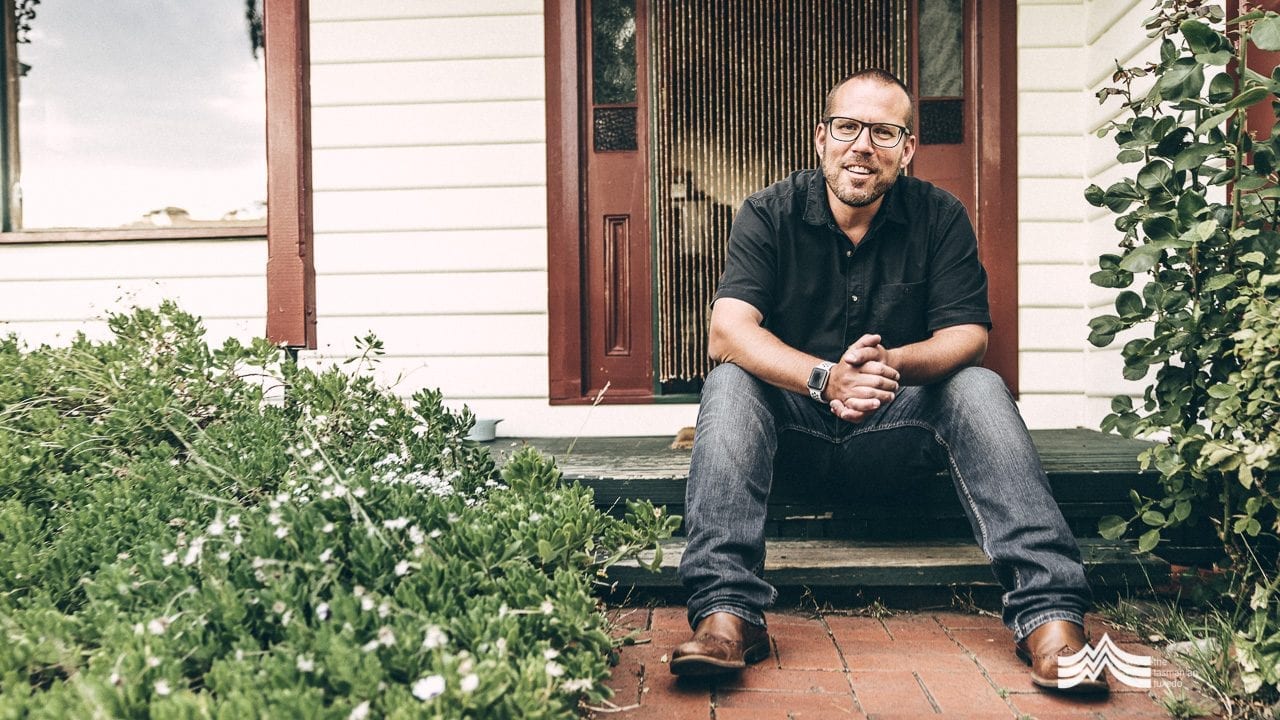 Historic country towns are not the usual habitat for multi award winning tech businesses, but then there’s nothing usual about the brilliant minds that Dave Shering has gathered here in Tasmania. Pioneers in the field of augmented reality (AR), Dave’s small but dynamic team are leading the global charge opening new possibilities in the virtual world.

Dave’s company, Handbuilt Creative, specialises in bespoke, photorealistic, AR digital creations. They create mind-blowing blends of interactive digital elements that blur the lines between real and virtual life. It’s technology that can be applied to everything from medicine and defence training, through to education and entertainment. In fact, over 40 000 visitors to TMAG have recently experienced a local Handbuilt project, coming face to face with a wandering prehistoric reptile at the Dinosaur rEvolution exhibition. It’s a great example of just how AR can be used to deliver a seamless perception of reality. But how does a global leader in this field come to land in a quiet rural cottage hidden under the limbs of an ageing willow tree?

Growing up on the outskirts of Edinburgh, Dave was an active teenager who developed a passion for mountain biking. “Back in the late 80s mountain biking was an emerging sport and super cool…lucky for me I was blessed with the genetics to ride a bike really well and I seem to find it easy to move through the pain barrier,” explains Dave. “I quickly became addicted to competing, and winning, at a high level…I don’t seem to be able to ride for fun, I have an instinct for speed, and that’s pretty much how my first real job ended up being in a bike shop.” 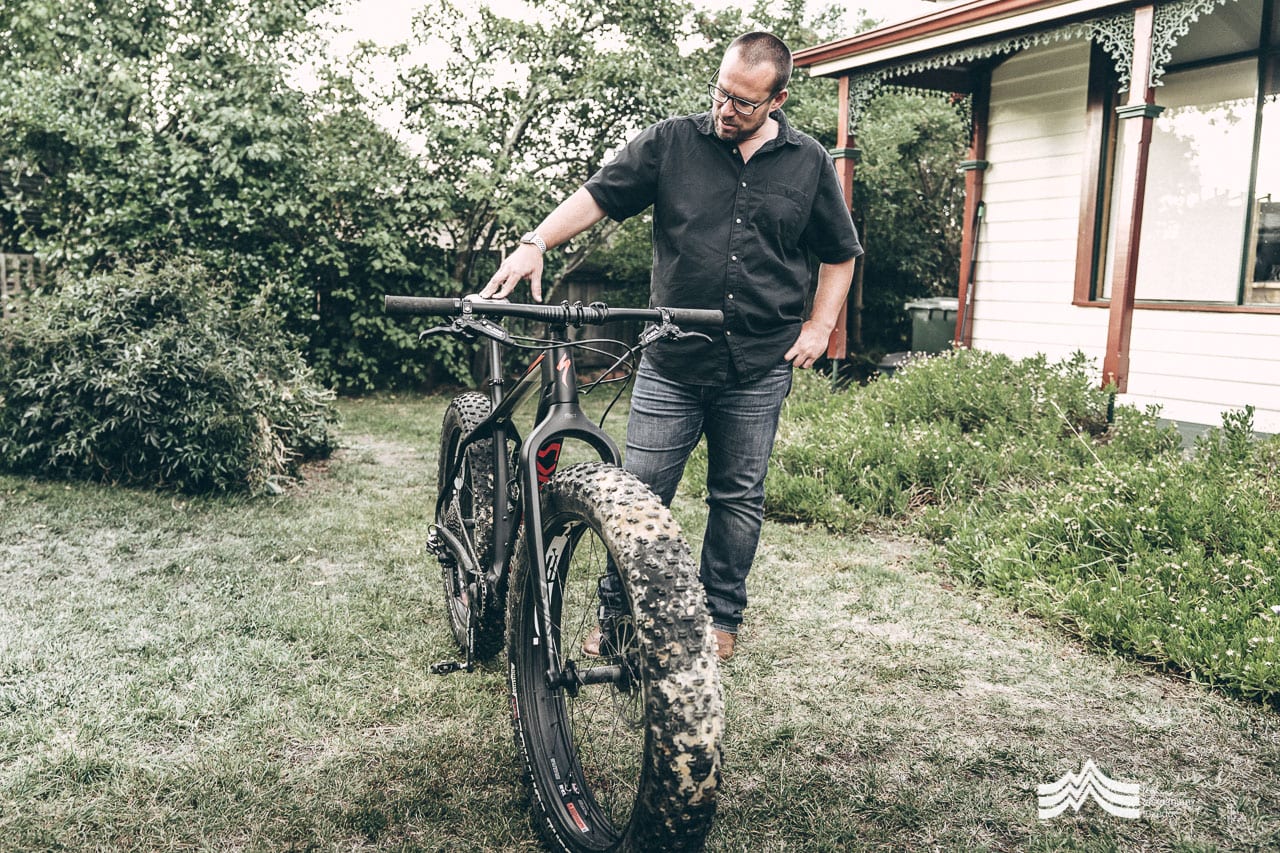 Straight after finishing school, Dave jumped on his bike and rode 150 kilometres to get to work. “I never looked back from there,” he says thoughtfully. Quickly impressing on the shop floor with his thorough bike knowledge, Dave was subsequently trained in sales, marketing and branding. “By 19 I was a director of the company and had a team of 15 staff. But I didn’t know any different and I guess I just assumed that was how work was meant to be at that age…I thought my mates were sitting around boardroom tables too. I kind of grew up there and learnt a lot about business along the way.”

“That period was really busy,” smiles Dave. “If I wasn’t at work, I was out riding or climbing…I was also right into rock climbing at the time too. Life was about non-stop action and I was often on the go until one or two in the morning with a group of mates. We pushed each other and it was one of the happiest times of my life.”

Whilst working at the bike shop, Dave was concurrently studying zoology at university. “It was an interesting time for me. I was really intrigued by animal consciousness and spent hours in the field observing and getting close to animals. I’m fascinated by the natural world, but I found that my uni lecturers weren’t open to new thinking and any form of real change.” Dave explains his frustration at not having his hypotheses taken seriously, “That was incredibly infuriating and I soon found myself looking for something else.” 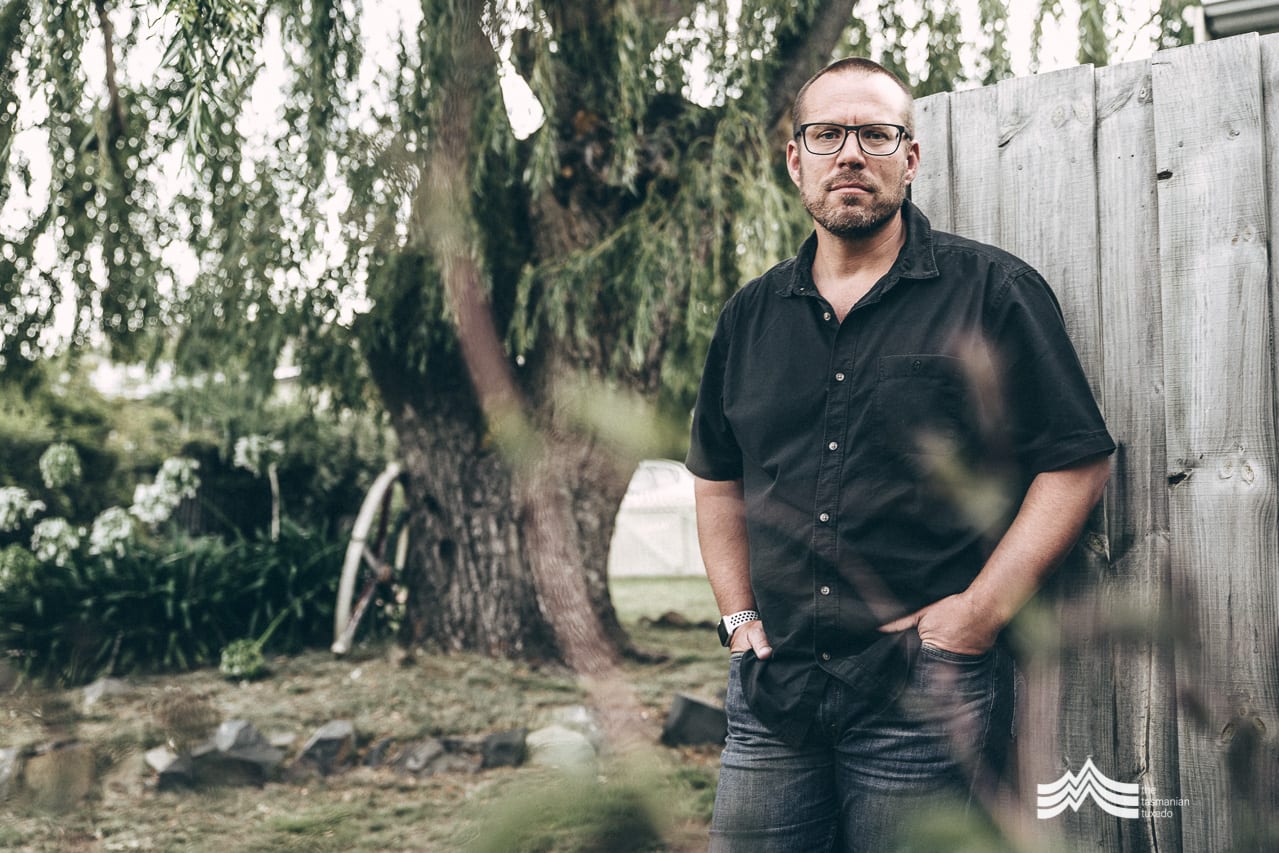 After meeting his now wife, through mountain biking of course, the pair decided to take some time out and hit the road on an epic tandem bike ride. “Michelle and I loaded up the bike and our trailer and set off for an adventure. We spent two years travelling all over Scotland, Canada and Australia…riding, climbing and filming. It was the best time,” he says, pausing to reflect upon the trip of a lifetime. “I had always been interested in cinematography and so when we arrived home I was really keen to turn our trip into a film.”

Enrolling in a multimedia course, Dave says, “That’s when I got into tech. I still recall the exact moment all those years ago when I saw a beautiful graphic rotating to music. It was very cutting edge at the time and I knew right then that that’s what I wanted to do.” Dave continues, “I quickly found my niche and at the same time realised the power of passion. Universities can be so slow to react, but when you’re passionate about something, you just need to do it. So I threw myself into flash and animation and taught myself how to create things in 3D. Lots of my assignments didn’t actually meet their briefs…I was working beyond the scope of the course and almost failed by pushing the limits too far…by being innovative. What I did work out was that I don’t like to be constrained by just one way of thinking.”

Emigrating to Australia in 2005, Dave says, “We sold everything and arrived here with just our backpacks. For the first year Michelle and I lived in our car, travelling and working while we tried to work out where to call home. Eventually we settled in Tassie and it instantly felt right. Everyone here seems to either have convict heritage or they’re immigrants…and that melting pot made me feel really comfortable.” Dave lets in on a little of his childhood, “When we were growing up, my father worked really hard to move us from low to middle class. He was a hardworking engineer with a dream, and I think his wonderlust for travel rubbed off on me. Dad always talked about emigrating, so it was probably something instilled in me from a very early age.”

Dave reminiscences about the time he and Michelle spent in those early Tassie days. “We had no money, we were living in a tent and we loved it,” he smiles. “We saw nature every day, had no water or electricity and were living very sustainably…however we made a pact when our daughter was born that if it ever got too much we would shift to more conventional living arrangements. That moment came when Isla was around six months old.”

Moving into the property market required a regular income. Dave says, “At that time I got a job as a studio manager in Hobart, looking after a busy web and design practice. I enjoyed it and could readily apply all the skills I had acquired over the past decade. Things were going well, however I was made redundant right at the time our second child was born. It was a defining moment for us as a family as we considered what to do next. We got down to our last two thousand dollars and I decided to draw on everything I had and take a leap of faith.” 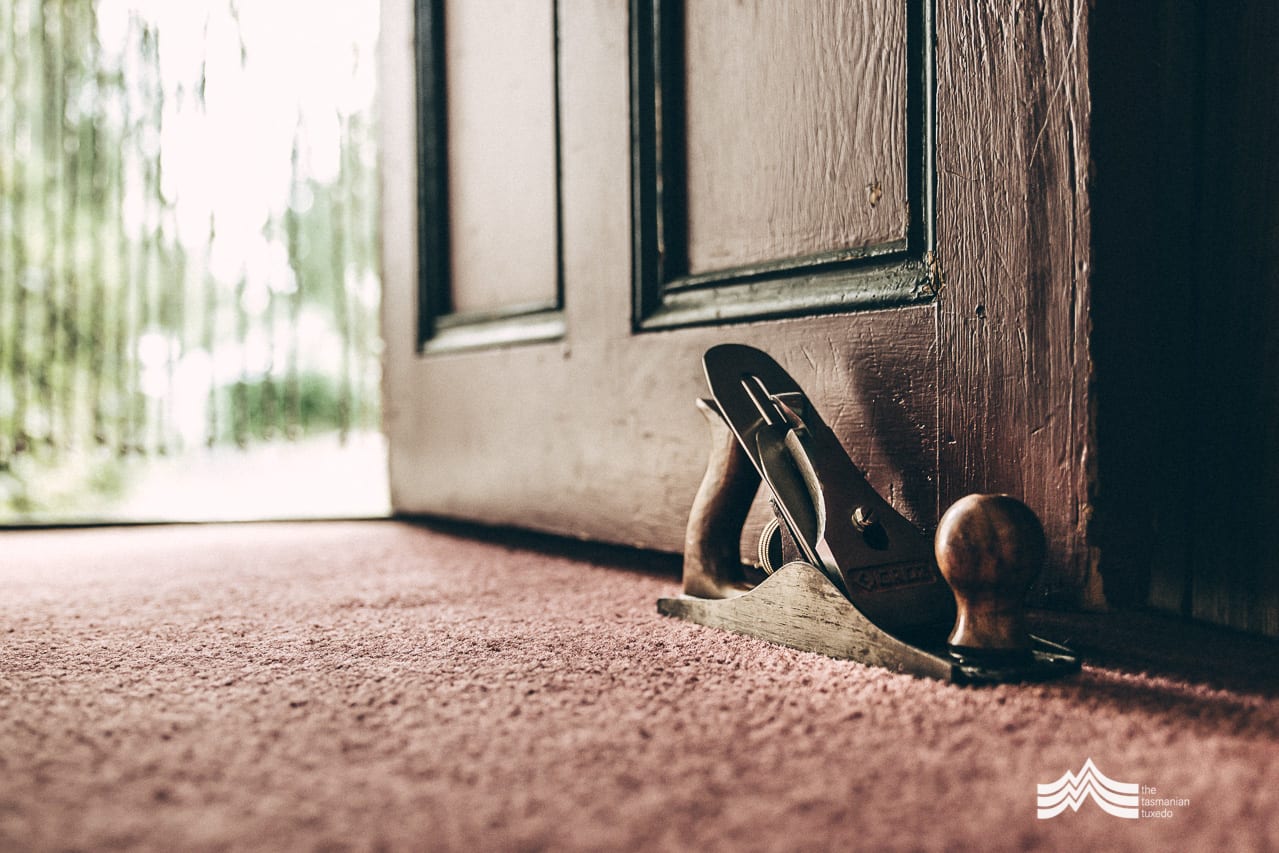 That leap was Handbuilt Creative. Establishing his own studio, Dave initially focussed on web, design and brand, pouring all his nous and energy into supporting his young family. “In terms of creating my own business, this was probably the best way it could have come about,” says Dave. “I had no choice but to make it work, and I felt reasonably confident I had the skills to do it…looking back though, it still makes me smile. At the beginning I had no professional space to greet clients and it really was a case of ‘fake it til you make it.’”

Dave’s determination saw him gather a team of professionals to support his delivery of award winning digital solutions. Big name clients began chasing their expertise and Handbuilt became a go to for an impressive list of corporate players. Acknowledgement on the global stage followed, with their work recognised in circles such as The Webby Awards and the Telstra Business Awards.

This humble Scotsman is a man of incredible work ethic. “I‘m not one to sit still,” says Dave when describing himself. “If I find something interesting, then I just love learning more and seeing how far I can take things…it’s just natural for me to throw myself into my work and do the long hours.”

Dave prefers to let his work speak for itself, shying away from the spotlight. It’s clear that passion lies at the heart of his success. “Passion is the big thing,” he says. “It’s like an addiction. I don’t care if my staff don’t have a degree…it’s not the be all and end all. I look at their portfolio and I want to see them genuinely excited about possibilities.” He pauses as he considers where he is today, “Once I commit to something, I do it. I’m about perseverance…I don’t think I’m special in any way…just determined, but it’s important I can see that in my team too.” 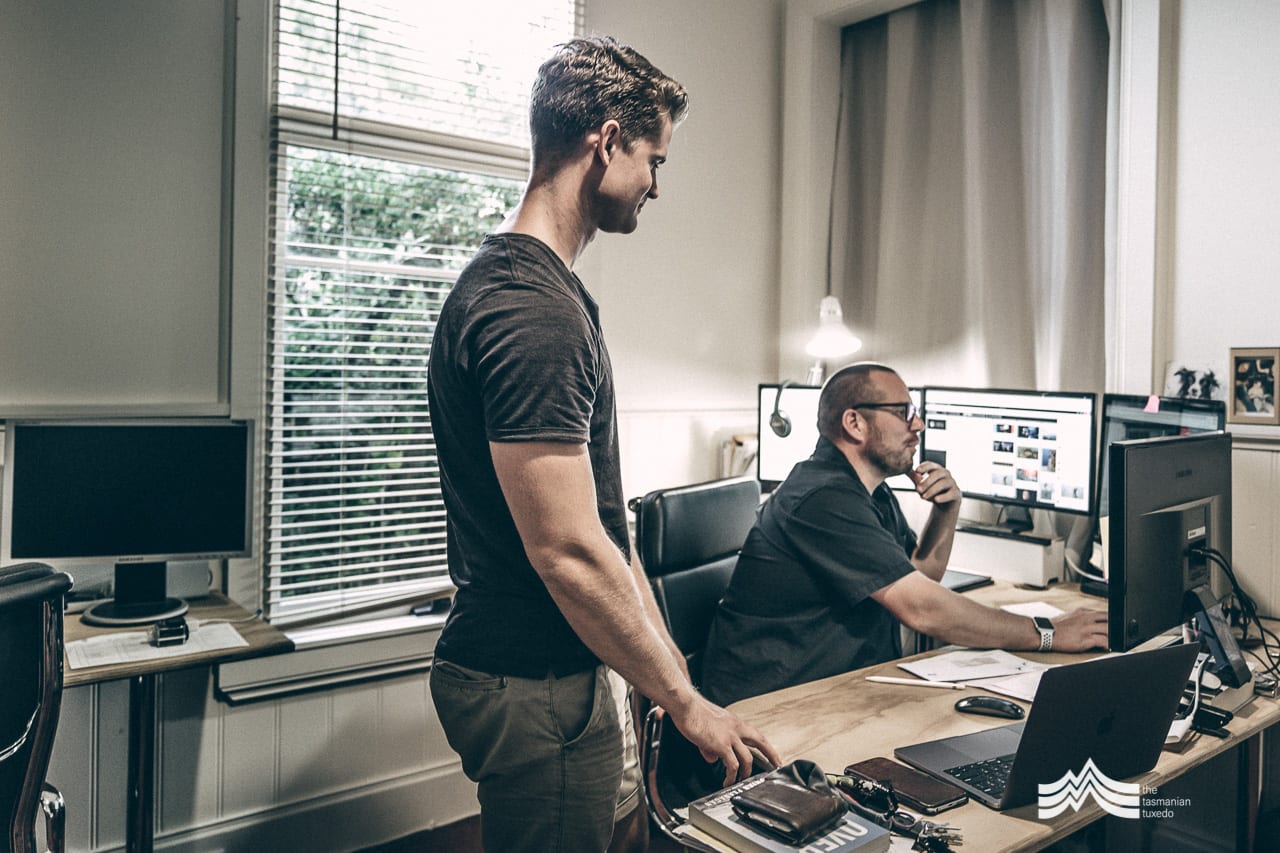 Head deep in new technology, being a small company gives Handbuilt agility. “We can respond to change rapidly but actually we don’t even look at what our competitors are doing, we just focus on our own agenda and put our heads down and get it done. I’ve pretty much refocussed the business solely onto AR over the past 12 months. That’s where I see the future for us…it’s not based on what our peers are doing, it’s where I see us being able to make the biggest impact and work with the most exciting technology.”

When asked to cite his biggest achievement to date, Dave winces and reluctantly admits, “I hate talking about myself, I’d rather let the work and the efforts of my team speak for us.” He continues slowly, “I’ve always worked by the mantra ‘just keep going’…and that’s what I do. For me, it’s all about quality and remaining humble. If I have to name up an achievement it would be that I’ve kept this whole thing going and I can pay my staff well. I’m driven by knowing we can still do more and I’d even go as far as saying we’re only at 1% of our capacity. That’s how much potential I can see ahead.”

Handbuilt’s team are constantly pushing the user experience to a whole new level. Recent projects enhance how we interact with the world and challenge our everyday perceptions. You can easily be fooled into thinking there’s a Tasmanian Devil on the loose at Hobart airport, you can explore the 1914 army barracks at Brighton, or you can take a breath and dive below the ocean’s surface with a Tasmanian abalone diver. It’s all about serious immersion in the experience. 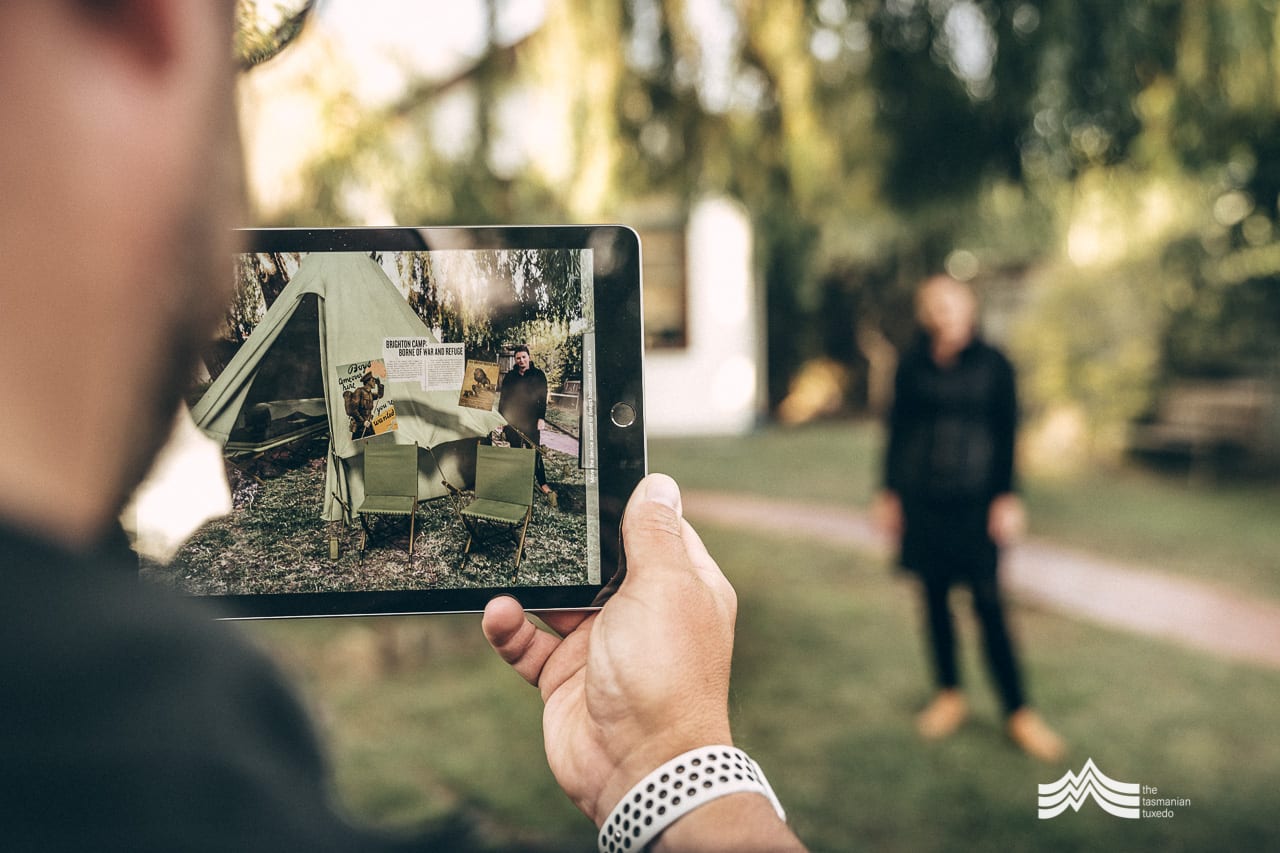 Speaking of the future, Dave says, “I’m driven by how I can make my work meaningful.” He grins as he goes on to admit, “I’m getting grumpier as I age and have completely turned off things like social media. I don’t see the value in brands that don’t tell the truth…and there’s a lot of noise out there in the online world.” Summing up his philosophy, he says, “I’m all about quality…don’t be greedy, just focus on the quality.’

“The future for Handbuilt involves a quantum leap of thinking. What we have planned is brain melting and I really hope we can pull it off. I’ve reinvented the business in the past year and our team is completely focussed on where we see AR going. Things in this space are progressing 10 times faster than web and I’m grateful I’ve been able to recruit world class talent to Handbuilt here in Tassie. Things from here are so exciting.”