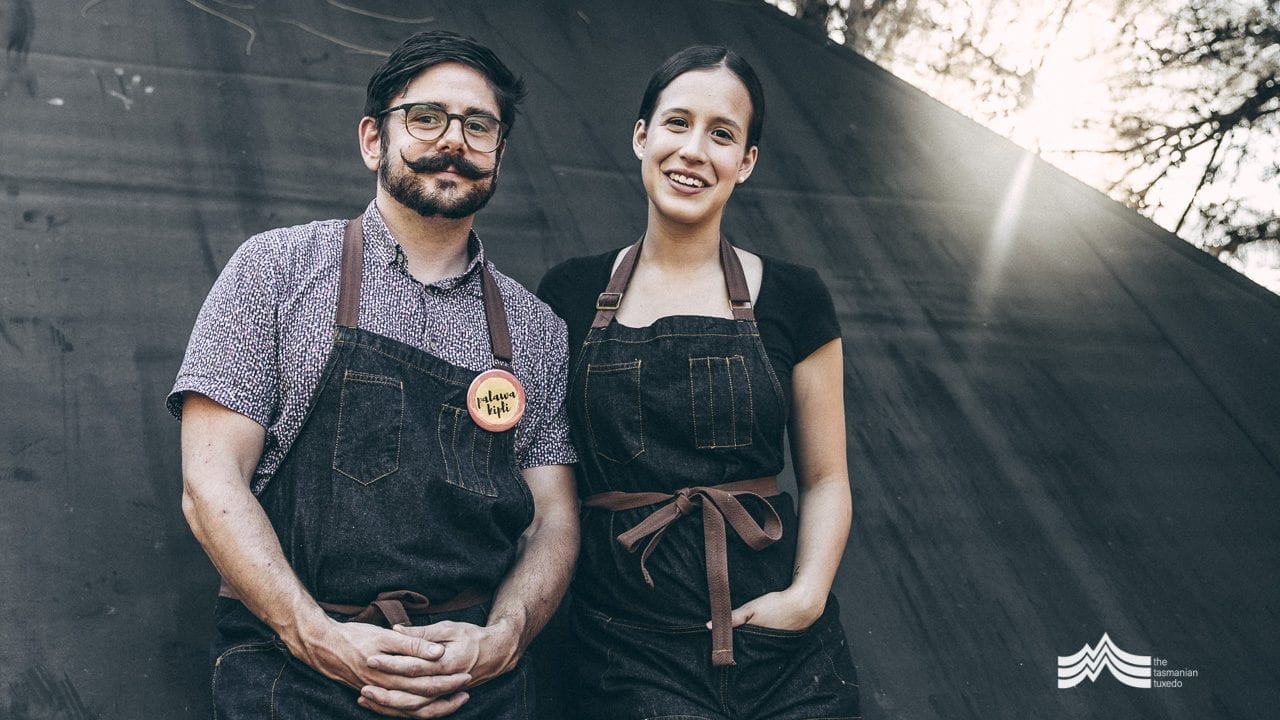 Tim Sculthorpe and Mariana de la Rosa are two of the friendliest people you’ll ever meet. From different backgrounds, continents and upbringings, this dynamic young couple crossed paths in London and instantly identified a shared passion for bringing people together.

A born and bred Tasmanian, Tim was travelling the globe as an aviation technology consultant, working long hours and chasing a sense of purpose. Mariana had relocated from her native Mexico, was completing her studies in industrial design and looking to carve a career with a clear focus on sustainability. Enter palawa kipli.

This fresh new player in the Hobart food scene celebrates Aboriginal culture and sustainable living principles. With palawa meaning Tasmanian Aboriginal and kipli meaning food, the concept seems relatively straightforward, however there’s so much more to discover when you lift the lid on the palawa plate. 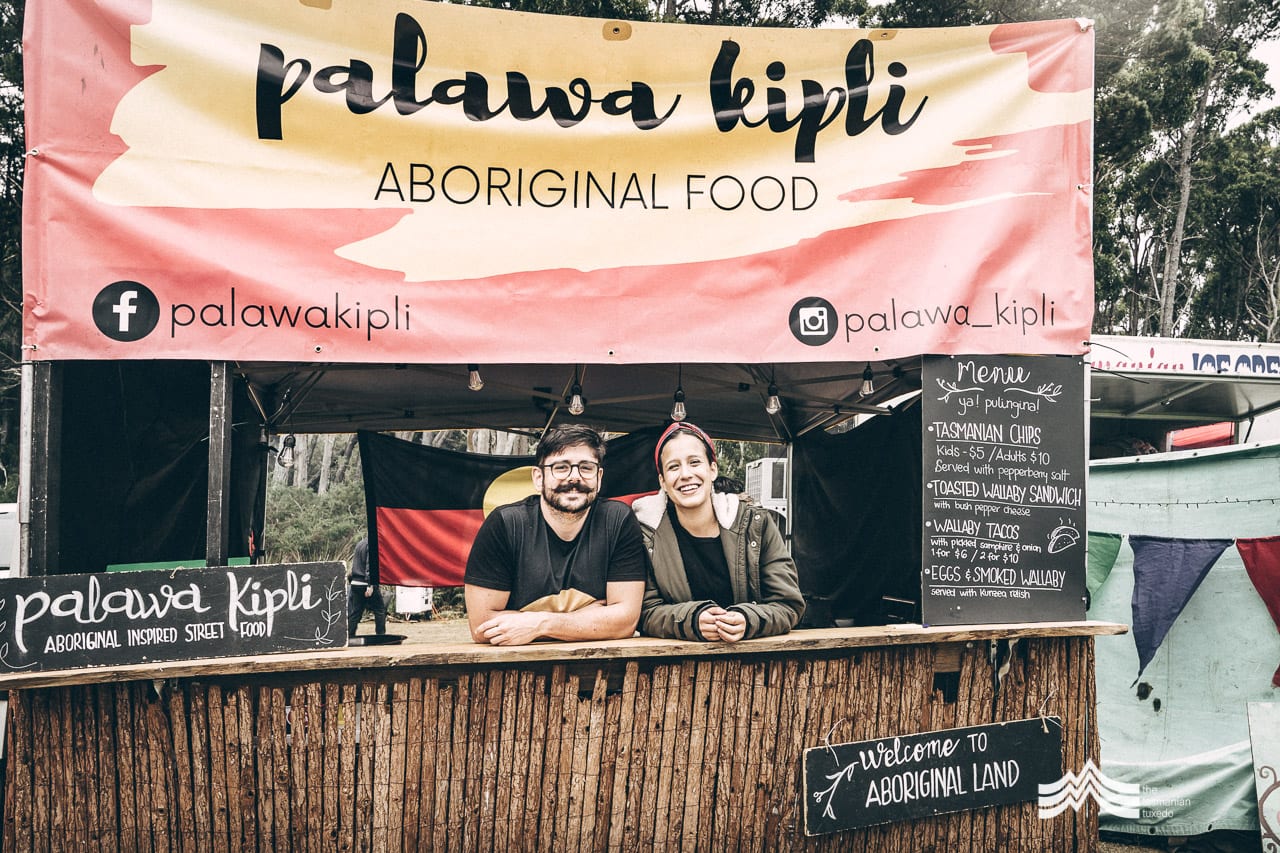 “We both wanted to forge a path that was not only good for us, but good for the world,” recalls Tim.

Mariana describes how in the early days of their relationship she’d question Tim to tell her more about traditional Australian food. “There didn’t seem to be a strong sense of culture connected to anything he mentioned. Pavlova…lamingtons…meat pies,” she laughs. “Nothing that offered a true sense of the country and its heritage. Coming from a city of 22 million and a rich food history, I landed in Tasmania and wanted to know what was behind this beautiful place…it’s so much more than amazing wildlife and tranquil landscape. There’s a unique history here too.”

Sitting back and looking at their shared values, the pair recognised food as common ground. “Food is a great means for sharing stories,” says Tim. “Even if you don’t speak the same language as someone, or come from the same culture, you can share a meal. Everyone understands food and it’s a great way to connect.”

“We moved back to Tasmania and spent the first six months of 2018 researching concepts for palawa kipli,” explains Tim. “What we offer is more than just a taste of Aboriginal food. We’re striving to deliver an experience…our meals are inspired by our Tasmanian indigenous culture, and we love to share the stories behind them. It’s about connecting with people and passing on our heritage.”

Mariana knew from previous research that indigenous cultures have long preserved biodiversity and kept their environments pristine. “There are lots of similarities between indigenous cultures across the globe. They are often biodiversity hotspots and we know that if we support those indigenous cultures then we are in effect caring for the land and preserving it. They’ve looked after it for thousands of years, and we now need to embrace those same sustainability principles to ensure a future for generations to follow.” 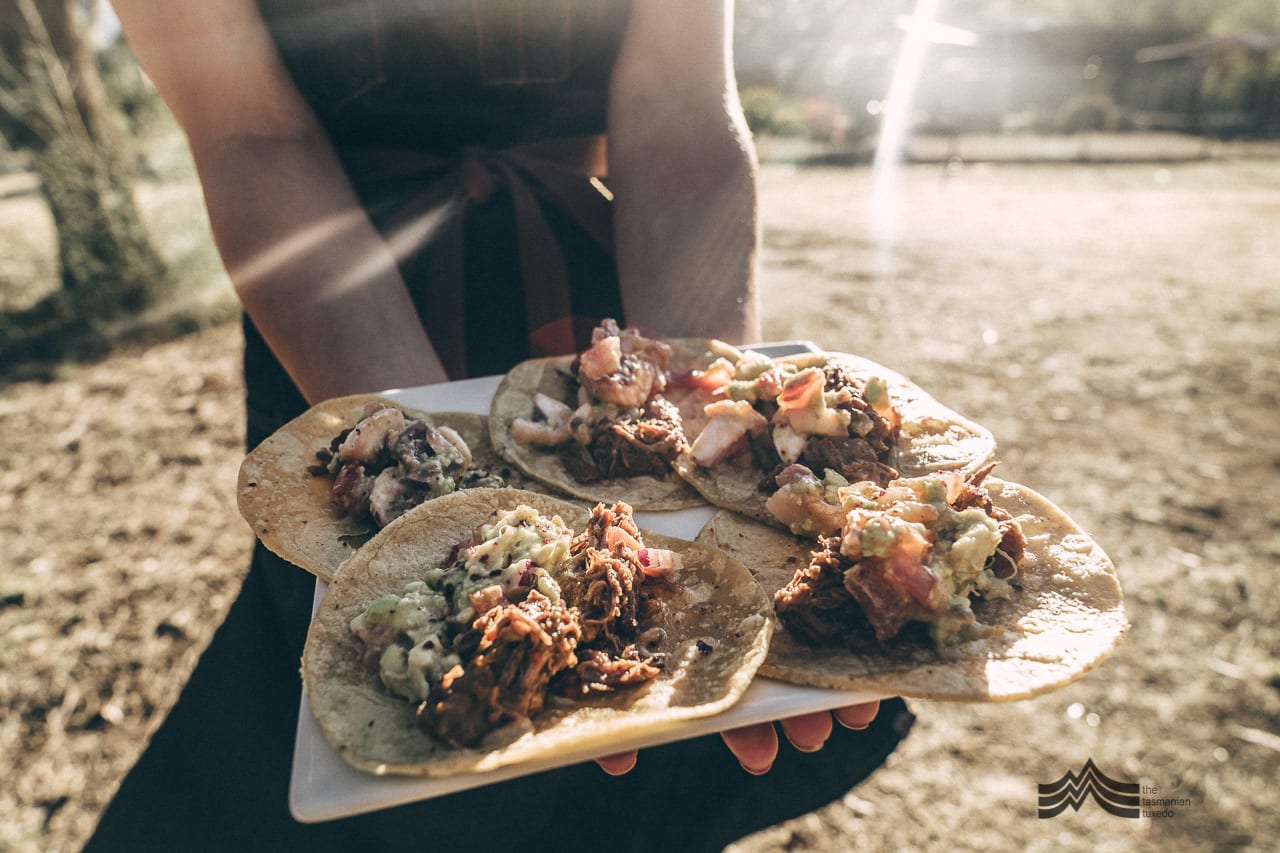 On the menu today are a variety of Aboriginal-inspired dishes, however Mariana’s own culture is also beautifully represented. Today we sample slow roasted wallaby tortilla and crispy crickets infused with saltbush and pepper berry. Simply delicious. The Mexican influence is subtle, and shines through with delightful ease. Tim says, “We offer something that’s inspired by my heritage, but Mariana often takes it to a new level. For example we often use tortillas as a nod to her heritage, but we love shaping them in to baskets…and that’s a representation of aboriginal basket weaving techniques.”

Launching in late 2018, palawa kipli’s birth was slightly earlier than planned. “We jumped in the deep end,” laughs Tim. “A friend gave us a last minute opportunity to do an event so we stepped up to the occasion.” The pair exchange smiles as they recall the evening, “Well, we learnt a lot that night,” Mariana smiles knowingly, her bright eyes dancing. “We were running around like crazy…panicking all day, not knowing if we were really ready…or even what to expect. But we were so proud afterwards.”

“We drew in a really good crowd that first night and overcame some unexpected teething problems,” says Tim. “Perhaps the best thing was having someone just put their hand up to help us right when we needed it. We certainly made friends for life that night,” he grins gratefully. 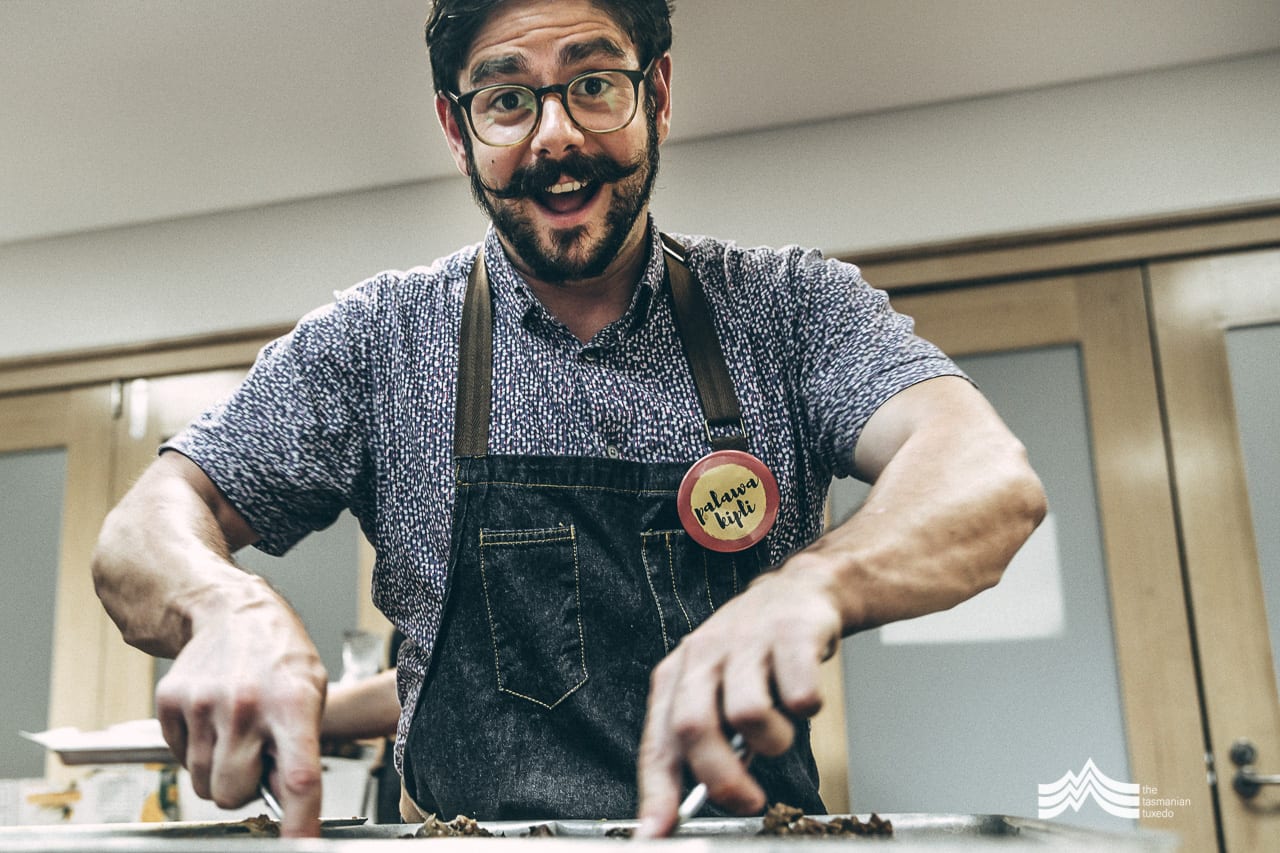 “palawa food is hard to research,” says Tim. “Not a lot has been documented, and it’s hard to find scientific evidence. This is mainly due to the near genocide that occurred in Tasmania.” He goes on to provide a great example of how he and Mariana source their inspiration, “We’d read a great research article that described Aboriginal families gathered around an open fire with a roasted wallaby. It appeared to be being dipped in ash…so now we’re trying our wallaby dipped in ash too.”

Tim explains how they’re adding new additions to their culinary repertoire all the time. “Things are constantly evolving and we do a lot of experimenting,” he says. “Most importantly, we’re committed to the sustainable sourcing of Aboriginal foods. Just about everything we source is Tasmanian and we only use premium ingredients…we support Aboriginal producers and suppliers wherever we can.”

Australian Aborigines are the oldest living civilisation in the world, dating back at least 60,000 years. “We are the traditional owners of the land and the ongoing custodians,” says Tim. “This means that we need to protect our land and take only what’s needed without compromising the resources for future generations.” 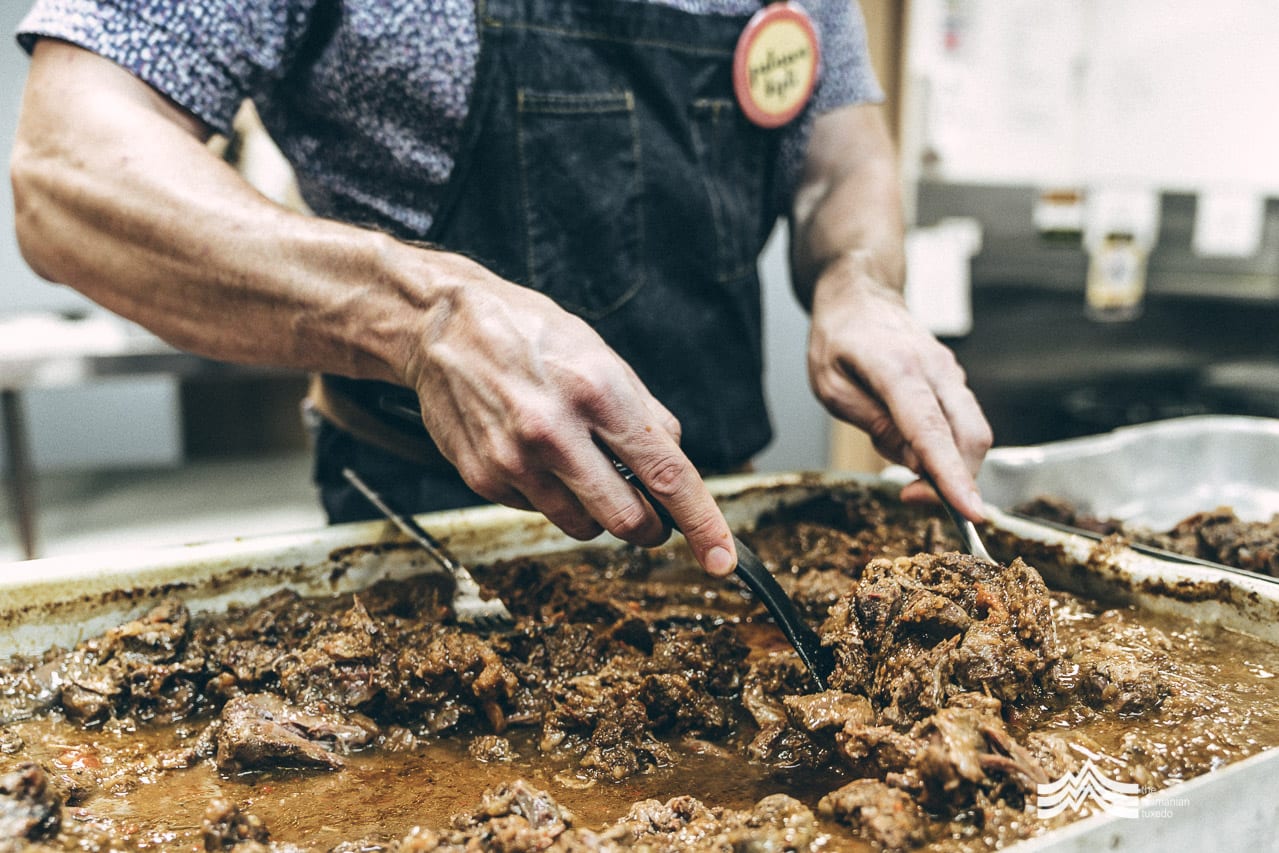 “There’s so much good Aboriginal food here in Tasmania. Crayfish, abalone, possum, wallaby, mutton bird…we also really want to use Aboriginal sourced foods as much as possible. That way we can really give back to the local community. We’re looking forward to the time when 100% of our products are sourced from Aboriginal communities.”

Mariana explains excitedly, “A little while ago we tried some mutton bird together. The flavour is so strong, I wasn’t sure what to do with it…but I modified a duck recipe with a honey glaze and it turned out beautifully.” She grins and nods when asked about her cooking background, “Neither of us are trained chefs, we’re learning as we go…trying…tasting…it’s all trial and error.” There’s something authentic in that process that connects this couple to their community. It’s simple and honest, and perched in their kitchen indulging in slow roasted wallaby is all about sharing good food cooked with love by friends. Perfect. 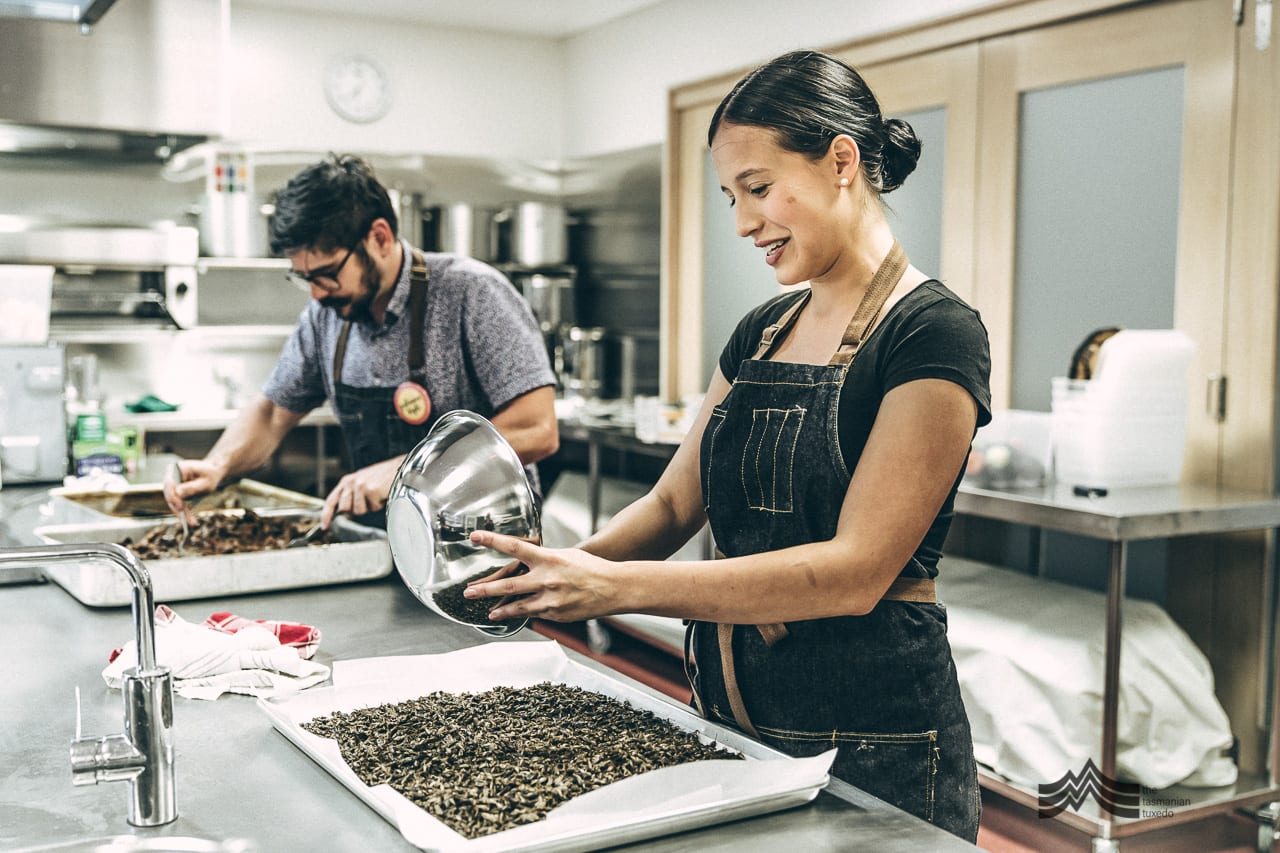 For now, Tim and Mariana are content honing their skills and learning to keep pace with the bookings that are flowing their way. “We’re getting a pleasing number of corporate bookings which can be a really rewarding way to share Tasmanian Aboriginal culture, and we love being at Franko on a Friday night. The market environment has been a great learning experience for us. Salamanca was a fantastic way to test the waters and really helped us understand the best way to connect with tourists.”

Tim and Mariana utilise the kitchen at piyura kitina (Risdon Cove). Whilst the site was handed back to Tasmanian Aboriginal people in 1995 and now houses a child care centre and great space for events, the location is a constant reminder of one of the earliest and most violent Aboriginal massacres in Tasmanian history. “Working from here is important to us,” says Tim. “We can support events going on at the centre and help share knowledge as well. By paying to use the facility we  also support the local Aboriginal community here too.”

“Sharing stories via food is what we are about. Recently we worked with the child care centre. We took the stories to the level of the children…so we talked about different tribes and the special roles people play within those tribes. The children helped prepare their lunch…the girls gathered the herbs just like our women would do in their traditional role, while the boys helped cut up the meat and we talked about what hunters would do.”

While Tim is often teaching others about his Aboriginal heritage, he’s also open about the other side of the family. “Mum is a white Australian and Dad is Aboriginal,” Tim explains. “I had to spend a fair bit of time coming to terms with my invader heritage as well. I really think the future for Australia is about embracing differences and redefining our identity. There are lots of small steps to be taken but if we take them with universal principles in mind, then we’re on the right track.” 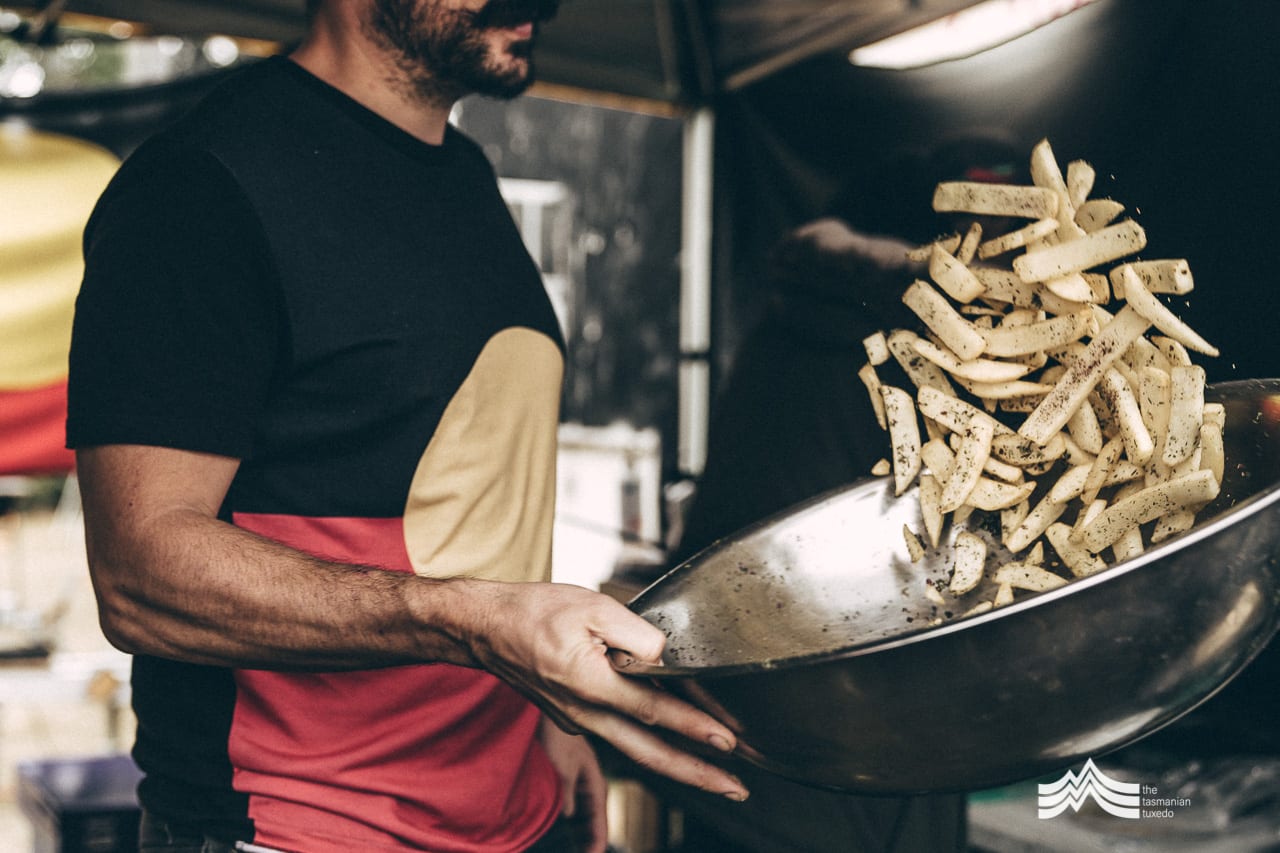 Sitting along the creek bank at Risdon Cove and drinking in a glorious sunset over kunanyi it’s hard to imagine the past this place has endured. Bounded by gums, wattles and she oaks, a large fire pit signals a place of togetherness and a sense of calm descends as the day draws to a close. We’re grateful for the energy and passion Tim and Mariana have to share.

Mariana is positive about the future, “So many people have been supportive of us, and it’s clear they care about the same things. We’re learning a lot more about each other and have gained a new perspective on life. Food connects everyone…a meal makes us all pause for a little while and share, and that’s really important in today’s busy world.” 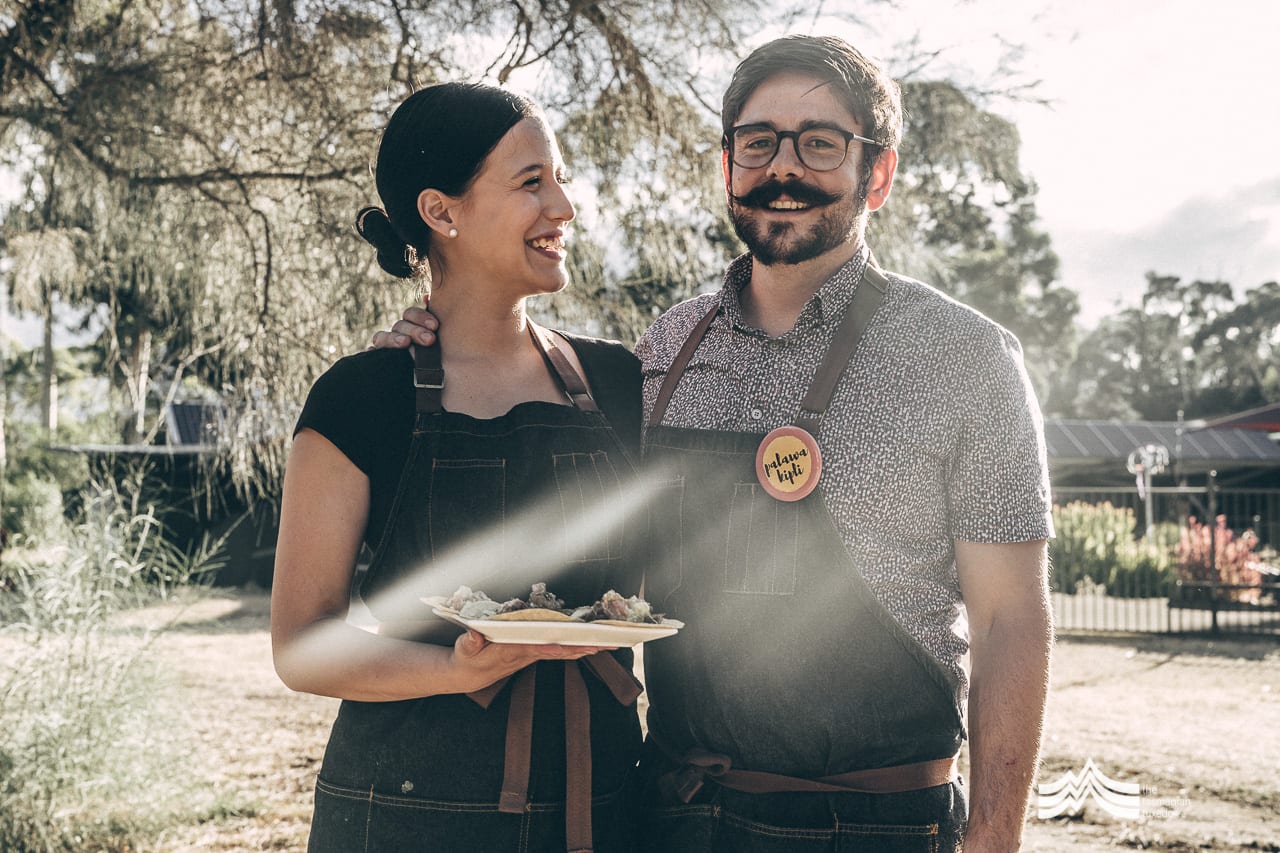