#7 Suzie and the strawberries 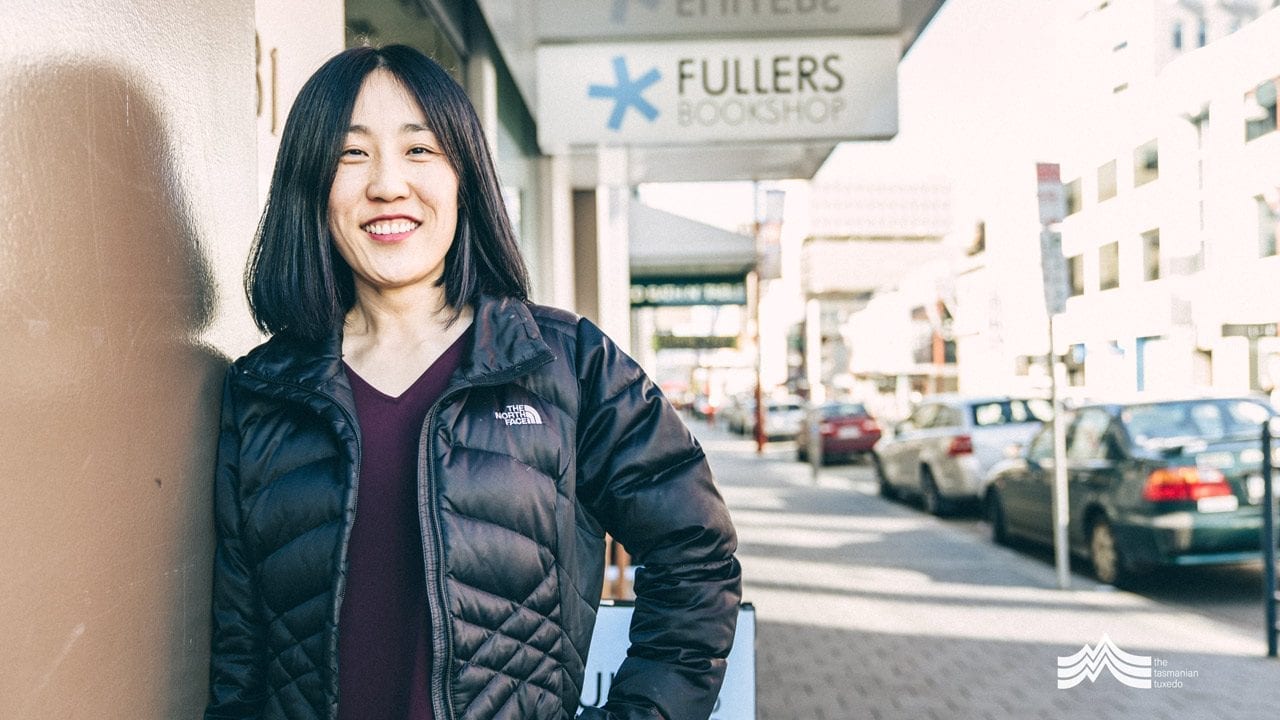 Rainbows, strawberries and a seat on the bus.

Big things may have brought celebrated teacher and driven academic Suzie Han to Tasmania, but it’s the little things that keep her here. After emigrating from China six years ago, having never had a conversation with a native English speaker in her life, Suzie’s journey to make Hobart her home has seen this quietly spoken but determined young woman weave an impressive story.

The only daughter of successful professionals, Suzie muses over the power of genetics, “Dad is the introvert. He gave me my natural curiosity, my love of books, an open mind and an appreciation of beauty. Mum is the extrovert. I inherited her perseverance, consideration for others and amazing work ethic.” 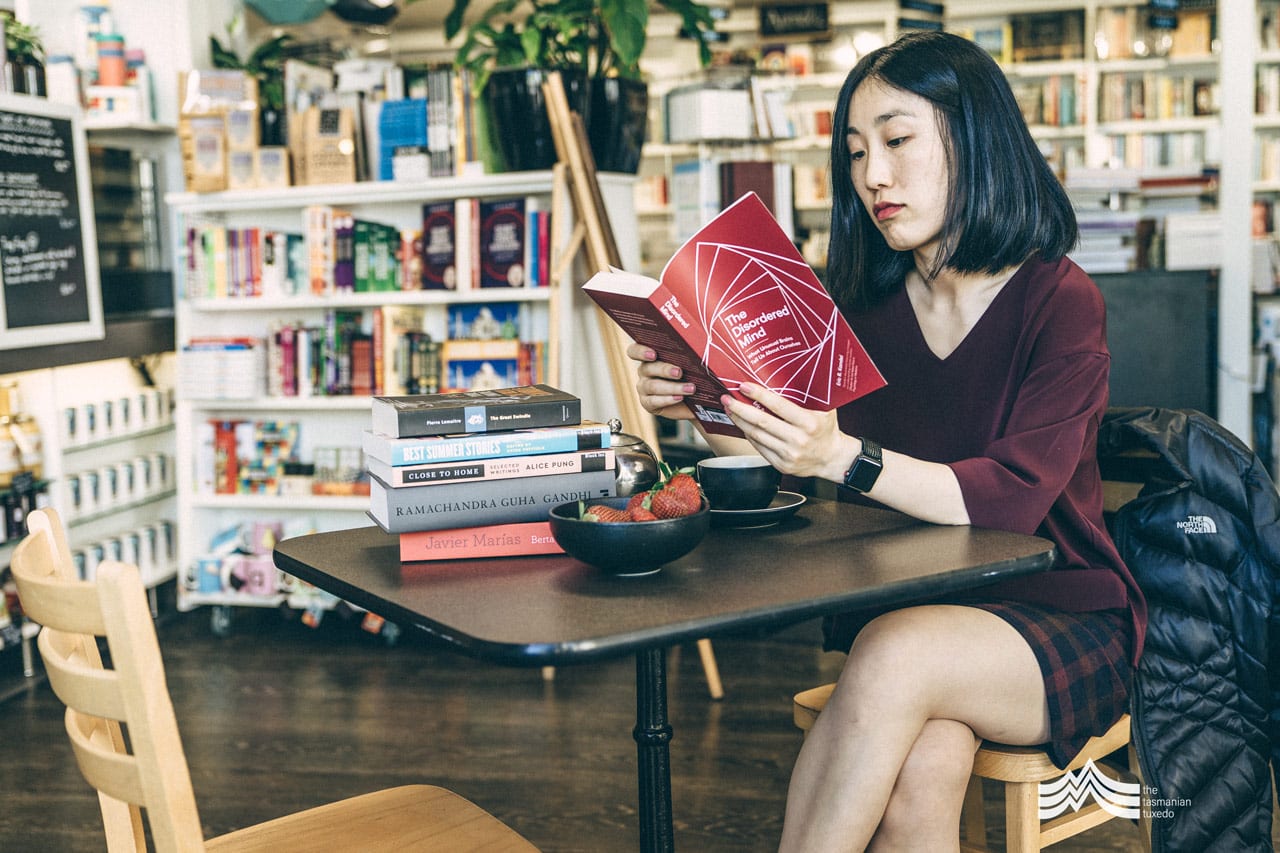 Growing up in Yungcheng, a small city by Chinese standards, Suzie recalls a happy childhood. “Yuncheng was a region in transition from semi-rural to urban. I did all the usual urban things growing up, hanging out with friends and going to the movies, but I also remember there still being pigs in the streets when I was very little,” she chuckles.

As a highly verbal toddler, the flair Suzie has for language was evident even from an early age. “I still love the Chinese language, literature and writing, I could spend days alone inside my own home just reading and thinking,” she explains, pausing. “There is so much to think about.”

Hitting high school in China, things got serious. After wrapping up her studies close to midnight, the 7am start to the school day was punishing. Suzie was a common early morning sight tearing through the local streets on her bike, often saying a silent prayer that she wouldn’t be late and face the wrath of her teachers.

The push for academic excellence was accompanied by a smothering pressure to conform and marked by a lack of freedom of information. Chasing independence, and much to the dismay of her parents, Suzie chose a Chinese university far from home. The experience inflamed her growing desire to emigrate and in her own words, “Opened my eyes to opportunity.” 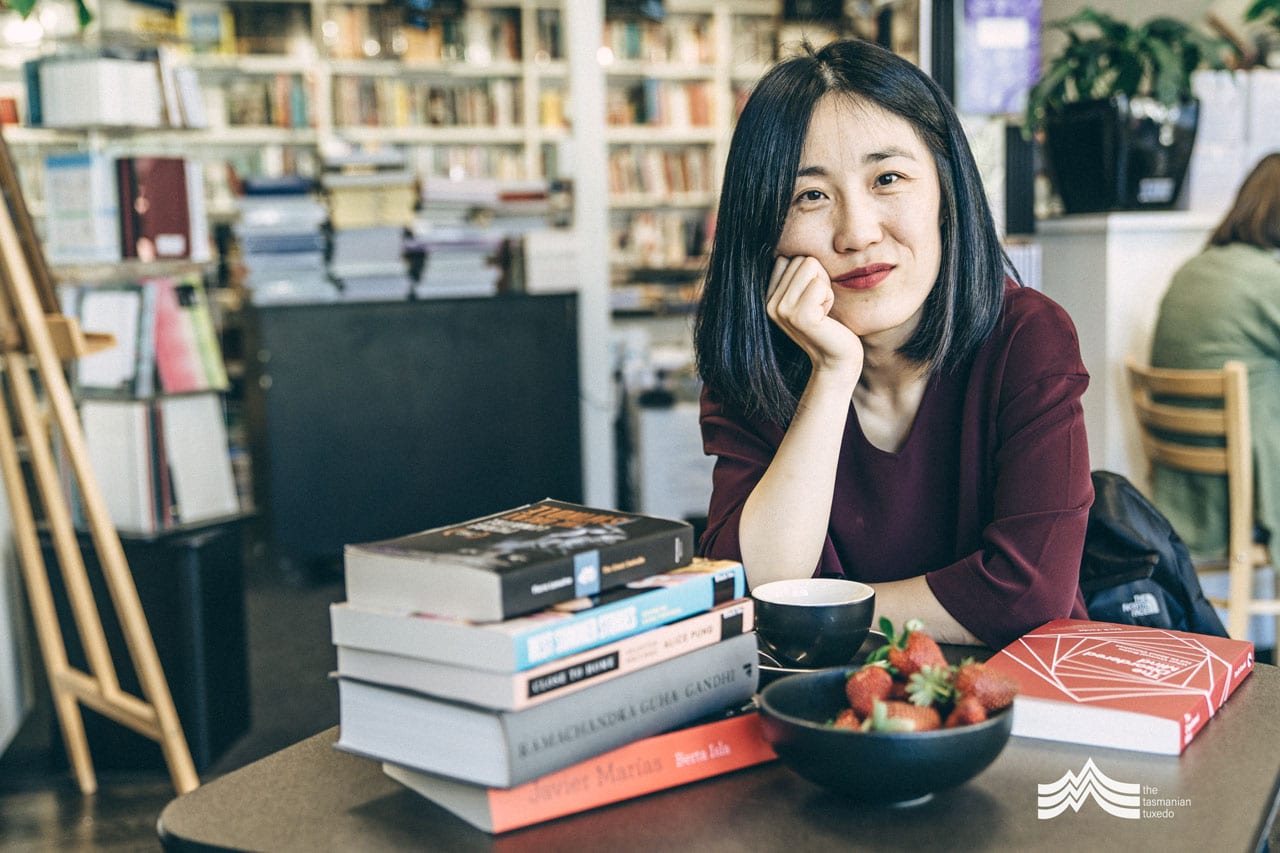 “I’m not a traveller, I love daily routine. Growing up, I always had a whole world in my bedroom, with books. But I like to think about my own behaviour and am always looking to improve myself.” Deep thinking Suzie was magnetically drawn to the intellectual freedom and independence promised by Australia. Using her double degree in International Economics and Trade and Industrial Textiles as a basis, she set about taking intensive English lessons to improve her language to the standard required in order to be considered by the University of Tasmania.

Suzie’s study destination was selected based on the likelihood of achieving permanent residency, and a glowing recommendation from a friend who had emigrated from China a few years earlier. Her brown eyes dancing, Suzie explains, “She said, ‘Come to Tasmania Suzie, you will love it.’ She was right.”

Clearly grateful for the support from her parents, Suzie speaks of their influence fondly. “My father encouraged a real love of beauty in me, he has a natural flair for style. It showed in my choice to study textiles and I even spent a year after graduating in China working in fashion design as a product purchaser and tester.” Her mother’s influence is clear however in Suzie’s own demeanour. “Mum has always been diligent. She worked her way up to being a Deputy Director in banking, she has such perseverance.”

Channelling her mother’s determination, Suzie touched down in Hobart in 2012 having been accepted to study a Masters of Teaching at UTAS. It was the very first foreign city she had ever visited. One can only imagine the excitement and trepidation that accompanied those first steps on the tarmac at Hobart airport.

Until arriving in Hobart, Suzie hadn’t seen a rainbow since she was six years old. “I remember my friend collecting me from the airport. I was trying hard to take in the scenery…it’s vividly etched in my memory. It had been a full 20 years since I’d seen a rainbow, they are so rare in China. I couldn’t believe it when my friend told me I’d see them all the time here in Tasmania.” 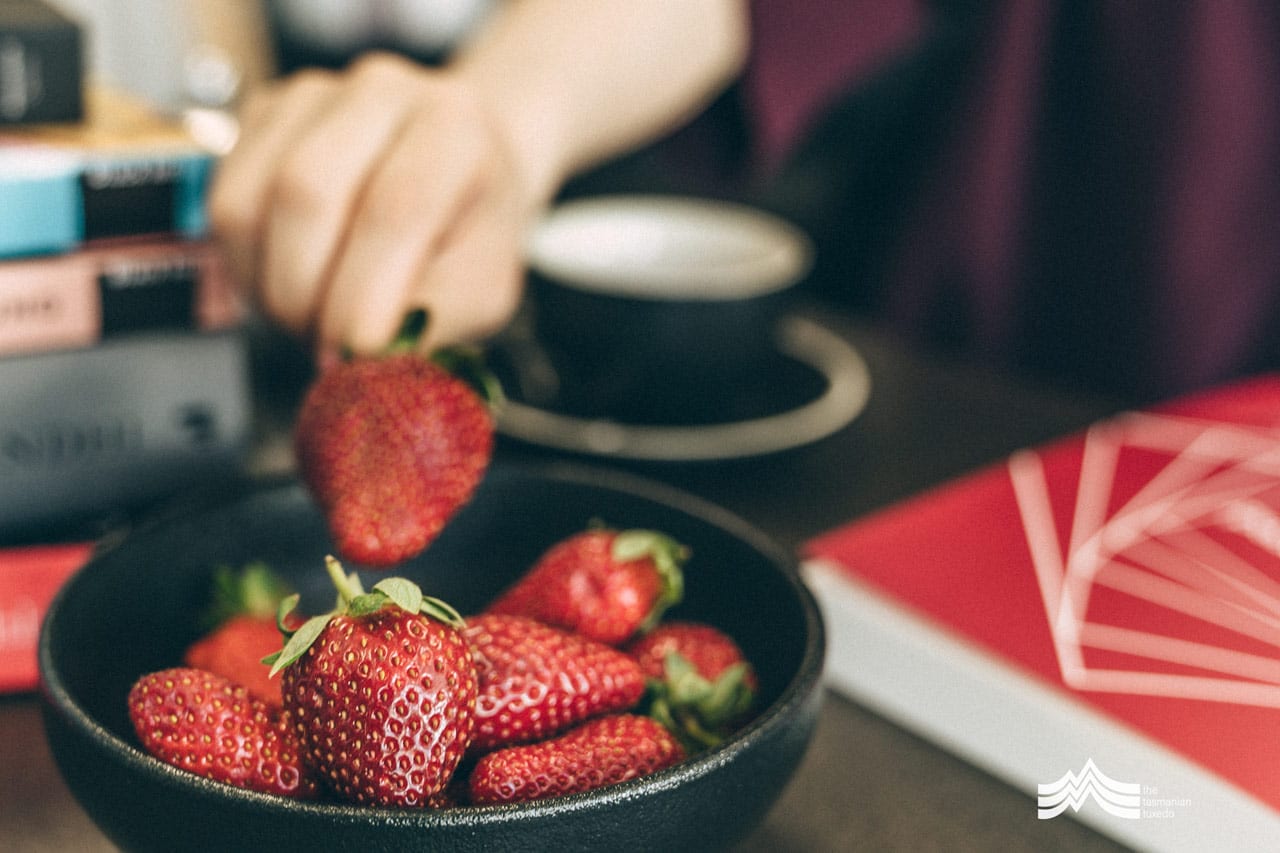 Local strawberries, ripened in the warm summer sunshine, were on the menu in those early Hobart days. Suzie recalls fondly, “I took one bite and yelled ‘Oh my gosh, this is what strawberries tasted like when I was young!” She falls silent for a moment, “Unfortunately in China today, strawberries don’t taste like that anymore. I hadn’t had strawberries like that since my mum used to buy them especially for me when I was a little girl.”

Suzie’s story is a reminder of all the little things that are special here in Tasmania. But it’s also a showcase of just how far a little resilience can take you in this corner of the globe.

“When I commenced my Masters, I quickly realised my English required a huge amount of improvement. I felt quite defeated and didn’t know if I would survive the course.” Suzie quickly identified the only way ahead was to do two key things. First up was to read as much as she possibly could in English. “Almost all my spare time was spent reading in that first year. I was extremely slow.”

Secondly, she forced herself to answer at least one question in every lesson. “It was hard and pushed me way outside my comfort zone. With my level of English at the time, I couldn’t articulate what was going on in my mind intellectually and I was so embarrassed. I felt I shouldn’t be there at all.”

Suzie also struggled socially, and again had to challenge herself to communicate. She’d push herself to initiate conversations with classmates. “Back then I couldn’t understand half of what they said to me, so I’d have to guess by their tone and their facial expressions,” Suzie admits. “I’d always find an excuse to end the conversation early before they would find out that I didn’t actually understand what was going on.” 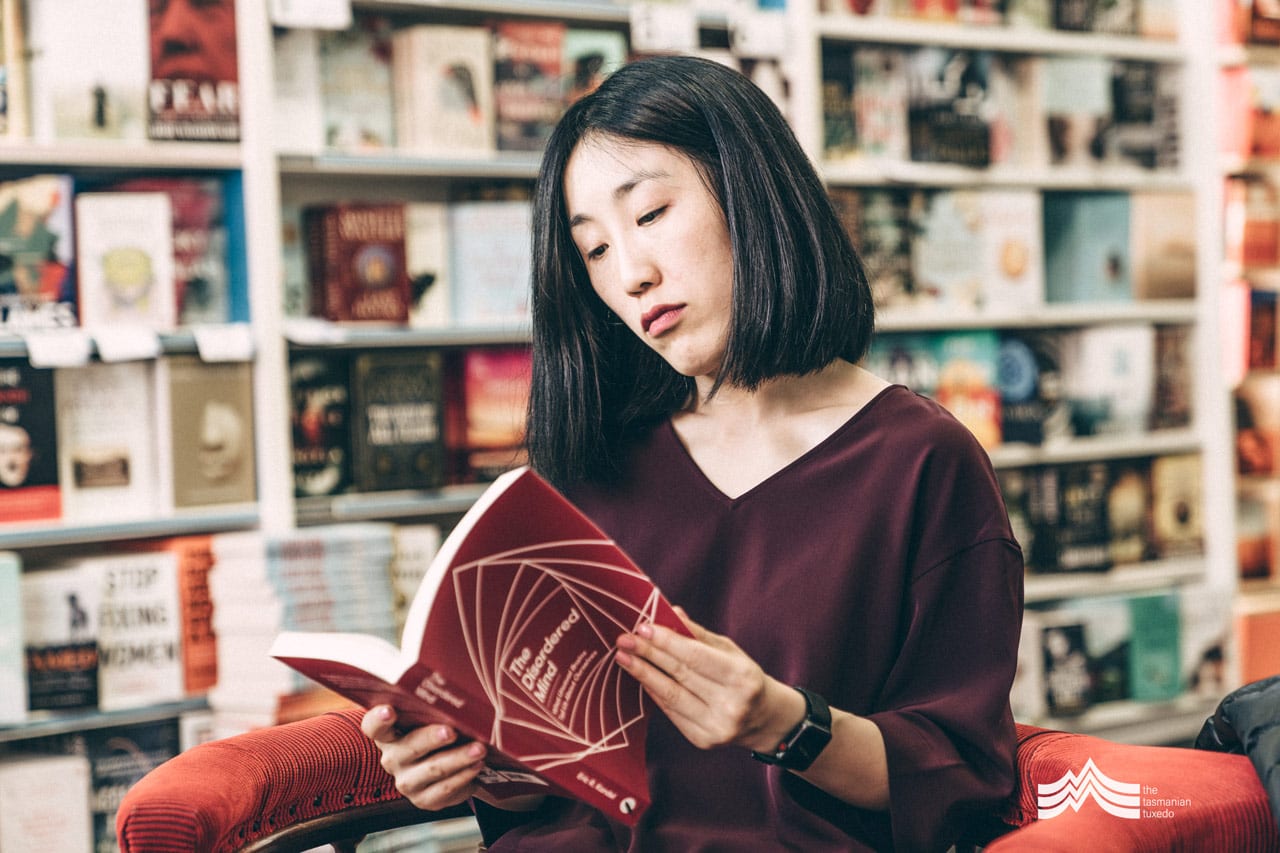 “Looking back, that period was the hardest in my life. I had to overcome so many challenges, but it was so worth it. I can be myself here. My workplace judges me on my ability and rewards my hard work. There’s always a place for me here if I work hard and focus on the things I want to do.”

Suzie’s efforts as an international student in Hobart were celebrated after she graduated and was named Study Tasmania’s International Student Graduate of the Year. Finishing her Masters and landing a job at one of Tasmania’s leading independent schools, St Michael’s Collegiate, saw Suzie’s teaching career begin to thrive. Today, she not only helps local students hone their Chinese language abilities, but also is instrumental in supporting the cultural transition of international students. Suzie holds the position of Deputy Director of Boarding at Collegiate and has quickly become an invaluable rock to international boarders not only completing their secondary education, but learning how to adapt to a whole new culture. Her experience speaks volumes to these young women who are lucky enough to have her as a role model.

“My experience in Tasmania is so positive. It’s quiet, but not rural, never boring…I love the galleries, wine, food, bookstores and cafes, even the weather. I couldn’t think of anything that Hobart can’t provide for me. The people aren’t materialistic, and there’s no pressure. I can just be myself.”

Suzie cites Fuller’s Bookshop as one of her favourite places in the city. The iconic store has attracted curious readers and eccentric researchers for almost a century and is renowned for its quirky charm. “I just love sinking into a corner of the café in Fuller’s with a cup of tea. I can get lost in a book, people watch or just sit and gaze at the mountain.”

Clearly UTAS is also keen for Suzie to build on her success. She’s just commenced a Bachelor of Education with Professional Honours in Leadership with a view to then completing a PhD. Celebrating her recent permanent residency, it looks like we have Suzie here to stay. Speaking of her newly adopted hometown, she describes it perfectly, “Hobart’s got a real magic. It never ceases to amaze me.”