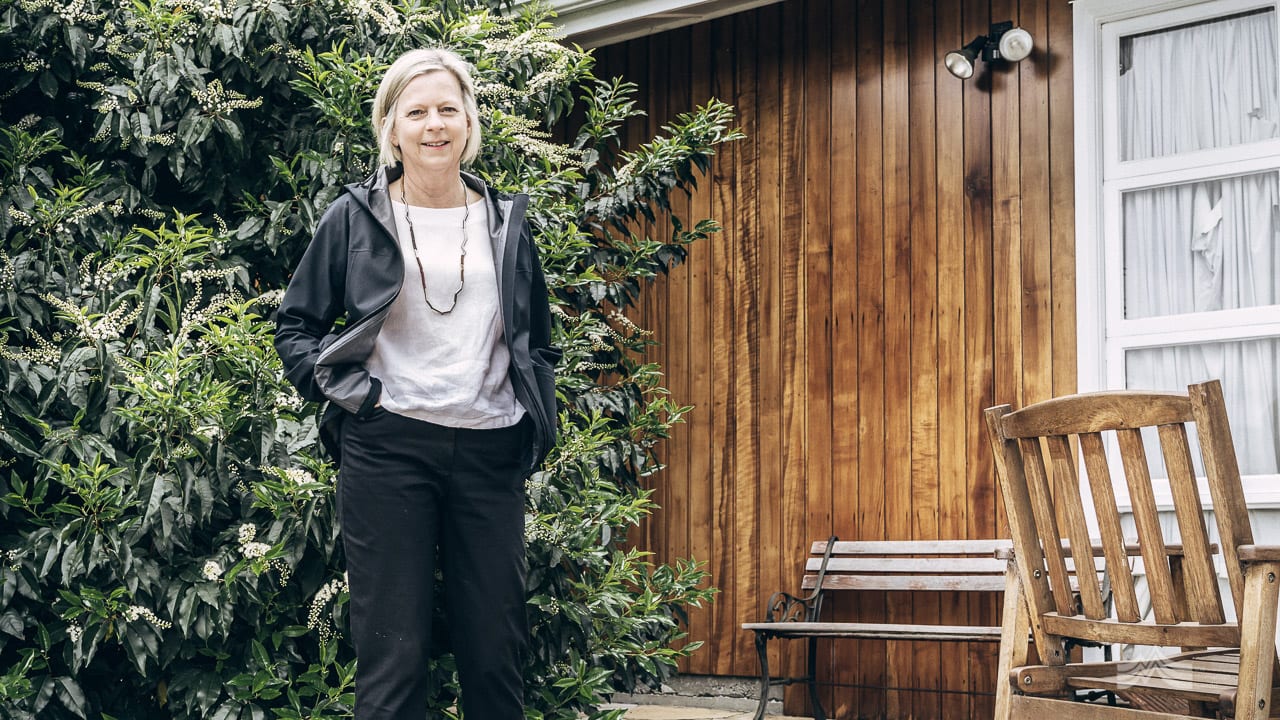 Joanna Baker reflects on her time growing up on the banks of the Derwent River. “I had the typical 60s childhood really. We roamed around everywhere with all the neighbourhood kids and dogs. But most of all…I read.” Her love for the childhood she spent on Hobart’s eastern shore is plainly evident.

“I read everything. From highbrow literature to Mad comics. But I can clearly remember the day I read my first Agatha Christie novel,” she recalls warmly. “I was out on the back lawn at our place in Lindisfarne. My parents were in the house rushing around, trying to get me ready to go somewhere and I was up against the garage, turning pages. I was basically hiding from them, because there was no way I was going anywhere until I’d got to the end of this book. I was completely enthralled. And then I can remember being just blown away by how Agatha had led me along and then tricked me.”

The impact of that moment set Joanna on a clear course. “Since that point I was searching the library shelves for Agatha Christie and writers like her. Although I’d have to say, in terms of clever plotting, no one else came close.” 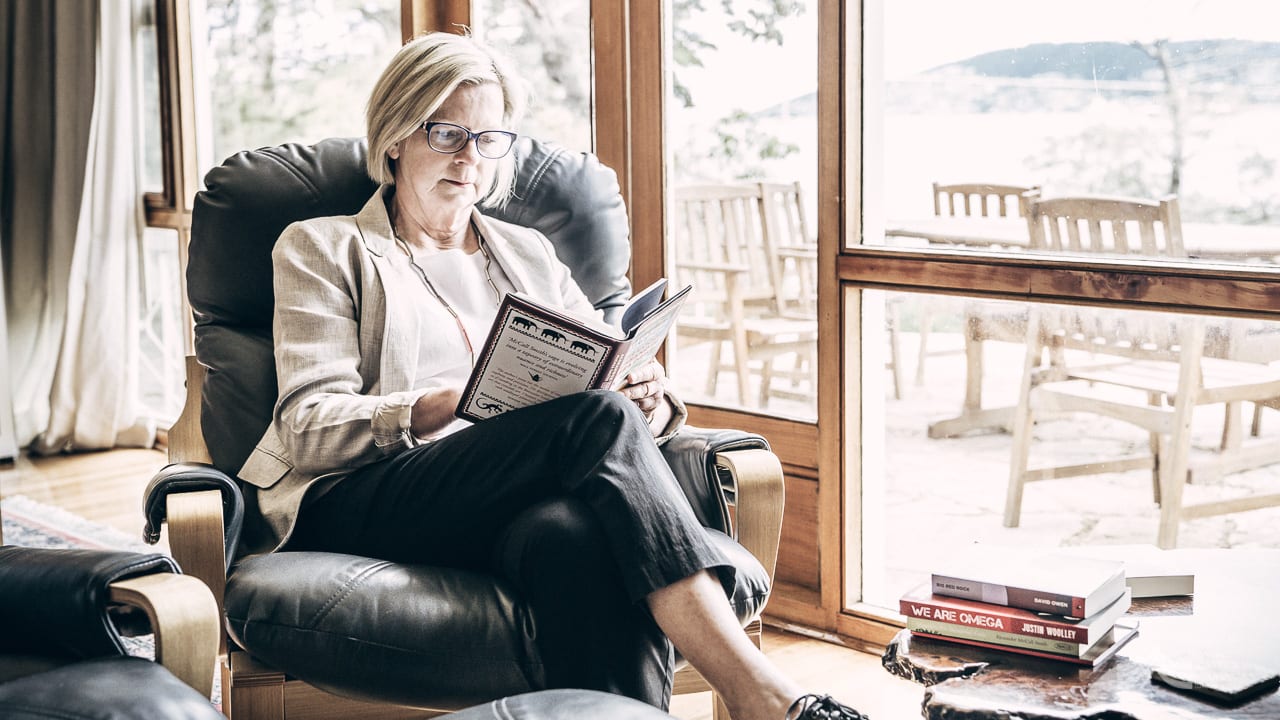 Joanna has since made a name for herself in murder mystery circles, emulating her childhood heroine by setting her first novels in small towns and villages in North East Victoria. For one of her latest works, The Slipping Place, she has turned to Hobart. “Hobart is a gift to a mystery writer,” says Joanna. “Its beauty is complex. It is a comfortable and vibrant town with a lot going on, and yet it sits pressed between expanses of lonely ocean and wilderness. In a way, I think there’s a sense of isolation that isn’t always articulated, but it’s there, lying under everyday life. And then of course there’s a great sense of the history that kind of seeps out of the walls. It’s a town of brilliant white Antarctic light and great darknesses.” 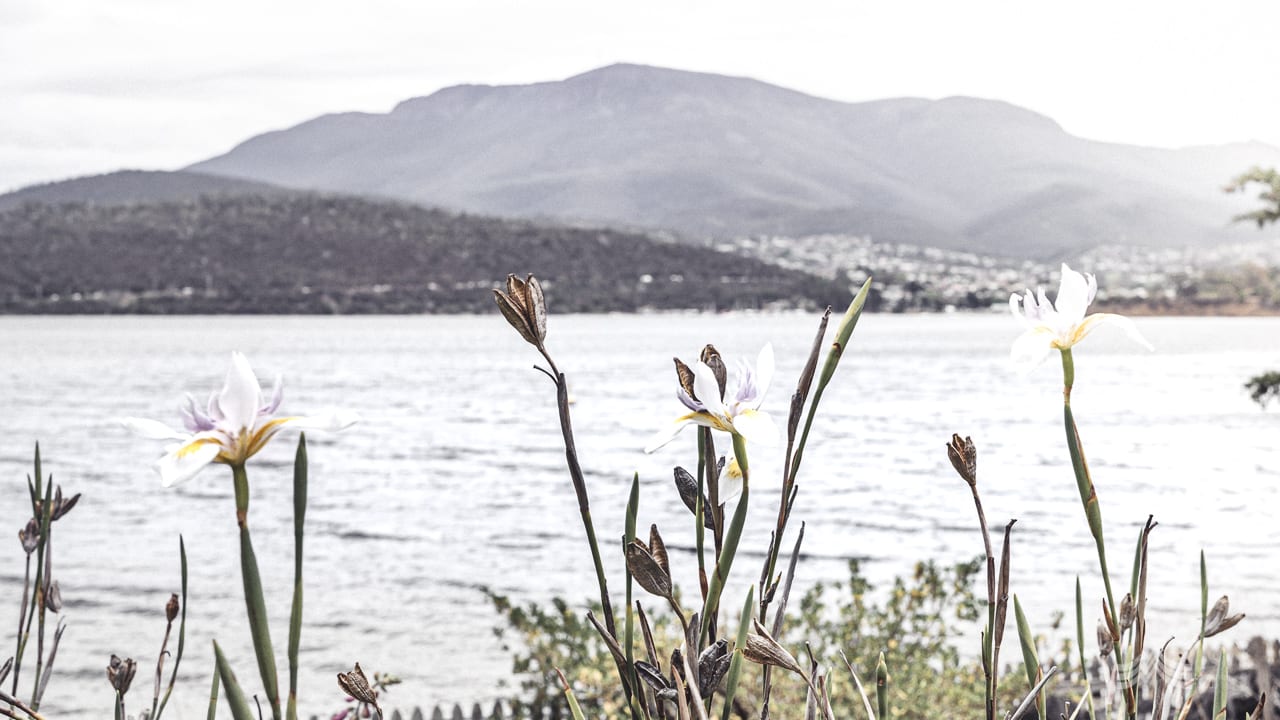 Joanna describes her style as ‘domestic noir’ and ‘mind games’. In The Slipping Place, the focus is what’s going on inside people’s heads. “I don’t write about police procedure or professional detectives, but people who are trying to solve mysteries within their own circles, among people they know well, or maybe they don’t know them as well as they think. But they’re page-turners and clue-puzzles. There is darkness and intrigue. Characters gradually uncover clues and piece together the sad story of a murder.”

One element in The Slipping Place is a fascination with bookshops. “That feeling you get when you walk inside a bookshop and you realise there is just so much knowledge there…and you just can’t know it all…That mystery. I find that really interesting. In a way it can be compared with our responses to wilderness here in Tasmania. It just seems to go on forever and you can’t cover every step. The thrill of the infinite, if that makes sense.” Another theme is artists. “I have a personal fascination with how artists use their work to try to understand the world. There’s a parallel there with mysteries. The main character of The Slipping Place has a constant sense that there are things she should be seeing, but they’re just out of sight.” 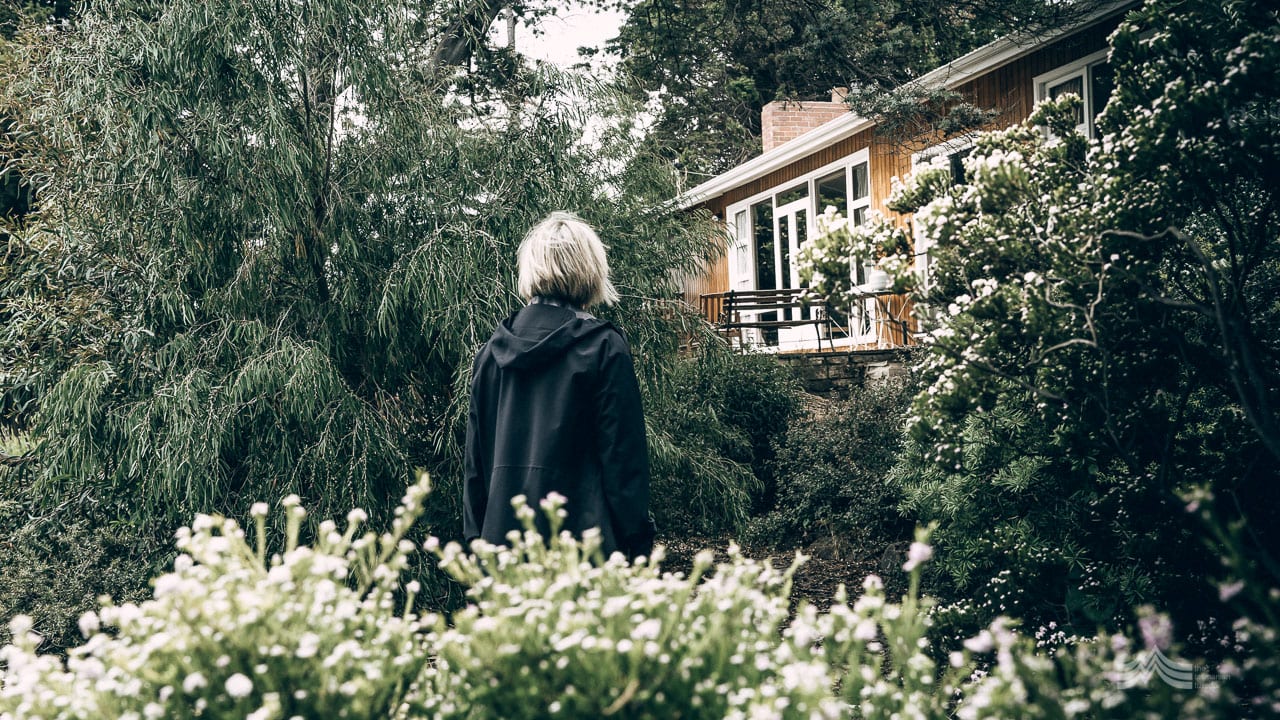 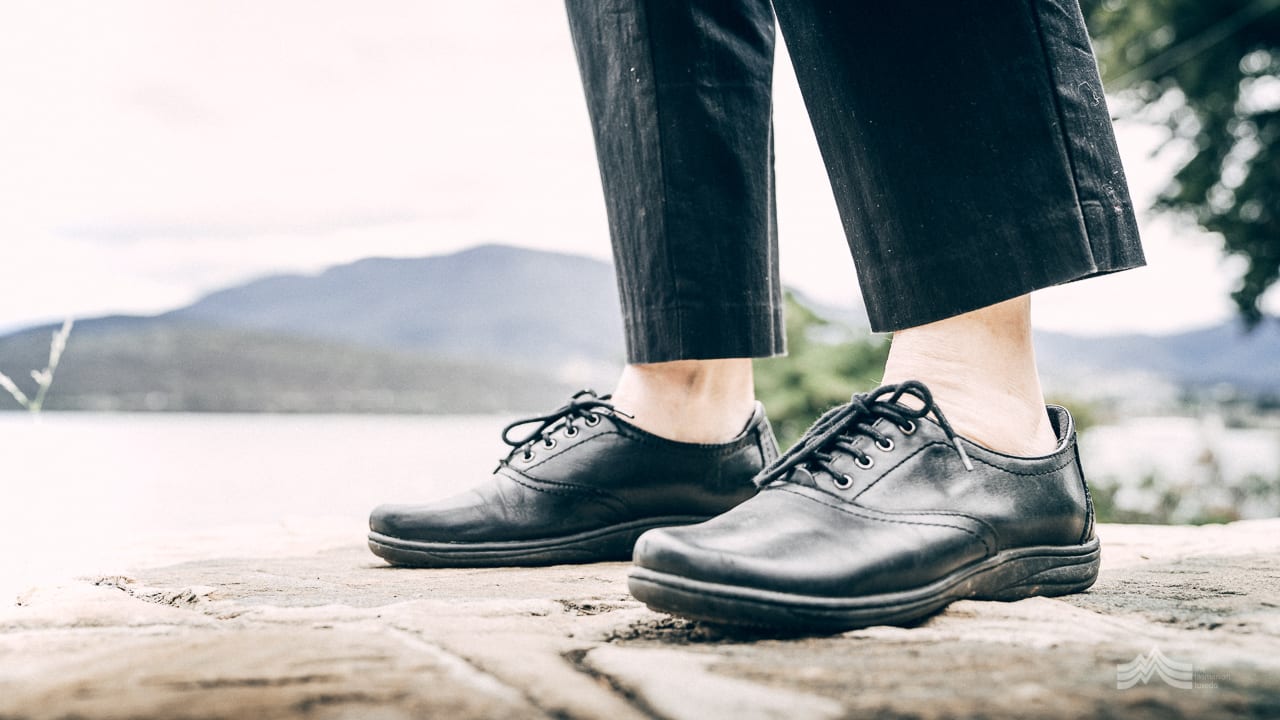 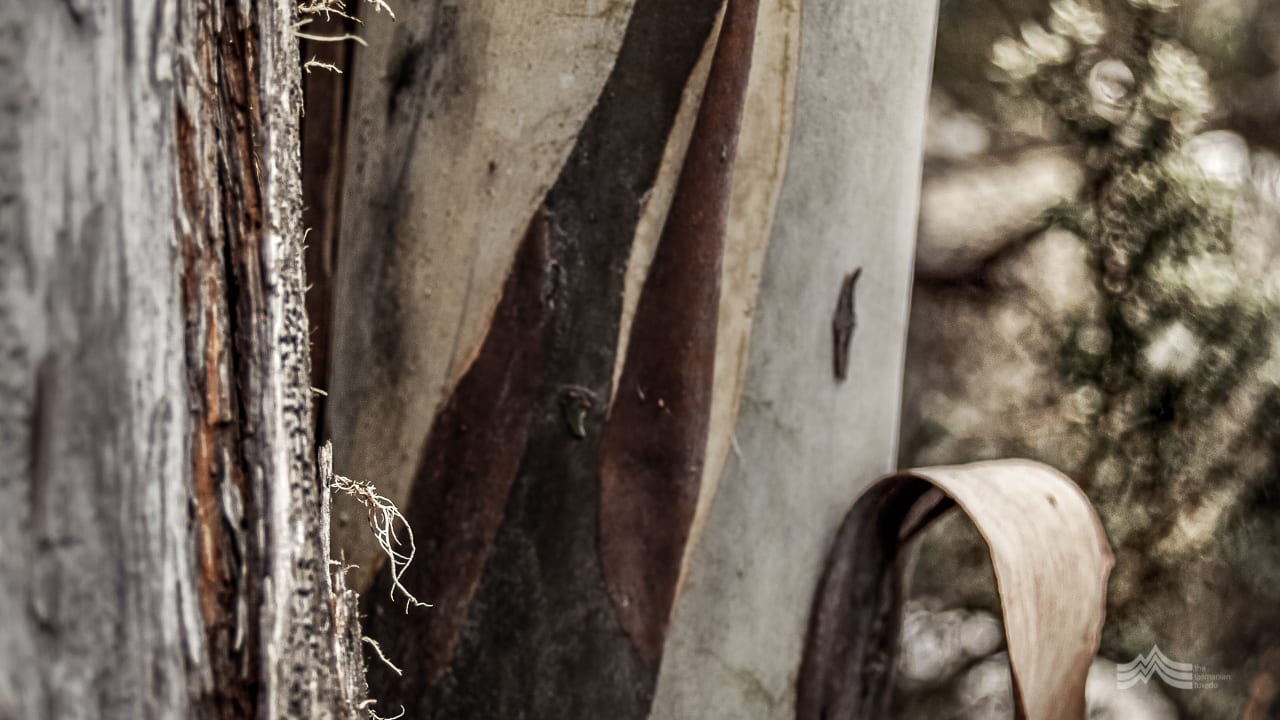 Joanna explains, “Many readers enjoy the thrill of the murder mystery. They know something has happened, but can’t work out why or how. The Slipping Place is about that. I call it ‘the thrill of not knowing.’”

When asked how the planning process works, Joanna says, “A murder mystery is really two stories. I plan the story of the murder…who it is, who did it and why…then I plan the story of the investigation. It’s a series of puzzles and clues with a classic twist at the end. It’s part of the genre that the reader is surprised, but that isn’t really the focus. I like the whole book to hang together as something meaningful.”

“Before I can write anything, I spend a lot of time getting to know my characters,” Joanna continues. “I have to live with them … for months really, writing their back stories, imagining them in different situations, until I know instinctively what they would think and feel in every scene, and how they would react. They have to be complete human beings to me.”

Joanna’s first novel, Devastation Road, was written for her own three children. “I wanted to introduce them to the joy I found in this genre, but Agatha Christie is quite strange to read these days so I set out to write something contemporary, with a compelling murder mystery plot,” she explains. “That was set in Yackandandah, in Victoria, the kind of pretty nurturing, small village that Christie often wrote about. It is suitable for young people but adults also love it. But my recent books are darker and more complex. I knew instinctively they had to be set in Hobart, my home town.” 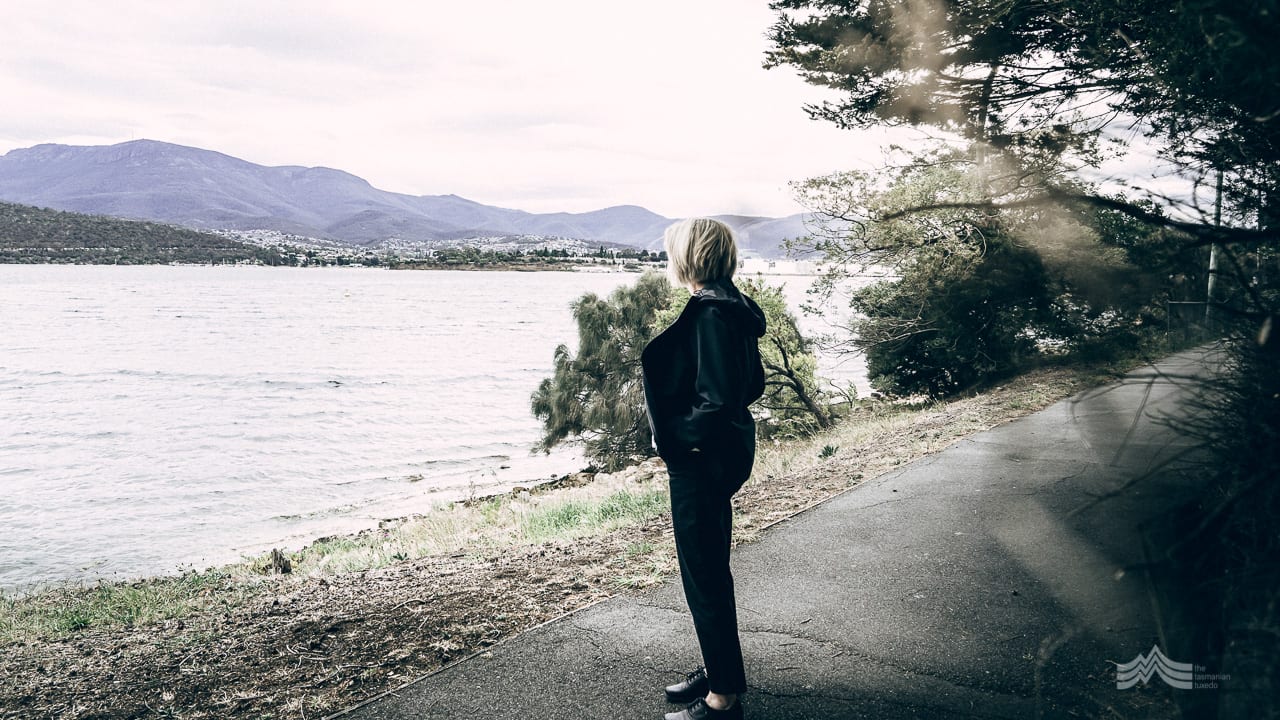 “There’s been a real shift in crime literature in recent times. It started with the increased use of female characters, young energetic women, and now authors have recognised that older woman have rich qualities to offer too – loyalty and insight and courage. That’s exciting, and something I have also been exploring.”

Joanna’s latest work, The Slipping Place, arose after she’d spent time pondering how we all distance ourselves from horrible events. “We’re all exposed to really appalling events each day on the news, but we manage to switch off and go about our daily lives. I wondered, at what point does one actually act on something? Why do we tolerate intolerable things…murders…child abuse…whatever it is…how close does an event actually have to be before an ordinary person will step in?”

“My childhood bedroom window looked straight across the river to the mountain. It has profound significance for me, as it does for all Hobart people, and it was the first choice as an important setting,” explains Joanna. The Slipping Place is a dark crime novel that centres around the body of a young woman discovered on the slopes of kunanyi/Mount Wellington. Exploring family secrets and moral questions, the novel takes readers on an intriguing journey through Hobart and its surrounds, whilst also examining nineteenth century literature, artists and what it takes to make and break a family.

“It’s a multi-layered murder mystery,” describes Joanna. And indeed it is, challenging both the characters and the reader to consider the worst thing they’ve ever seen. “It’s about secrets, lies and unspeakable cruelty. It’s about mothers and sons, unconditional love and bonds of blood.”

The Slipping Place is a novel that keeps readers busy. It pushes them outside their own comfort zones, forcing them to imagine unspeakable abuse, bathes them in local history, takes them on a tour of gritty Hobart backstreets and illuminates them with the glow of rich Tasmanian scenery. For a local, it’s a surreal experience to read something so challenging set in our very own town. 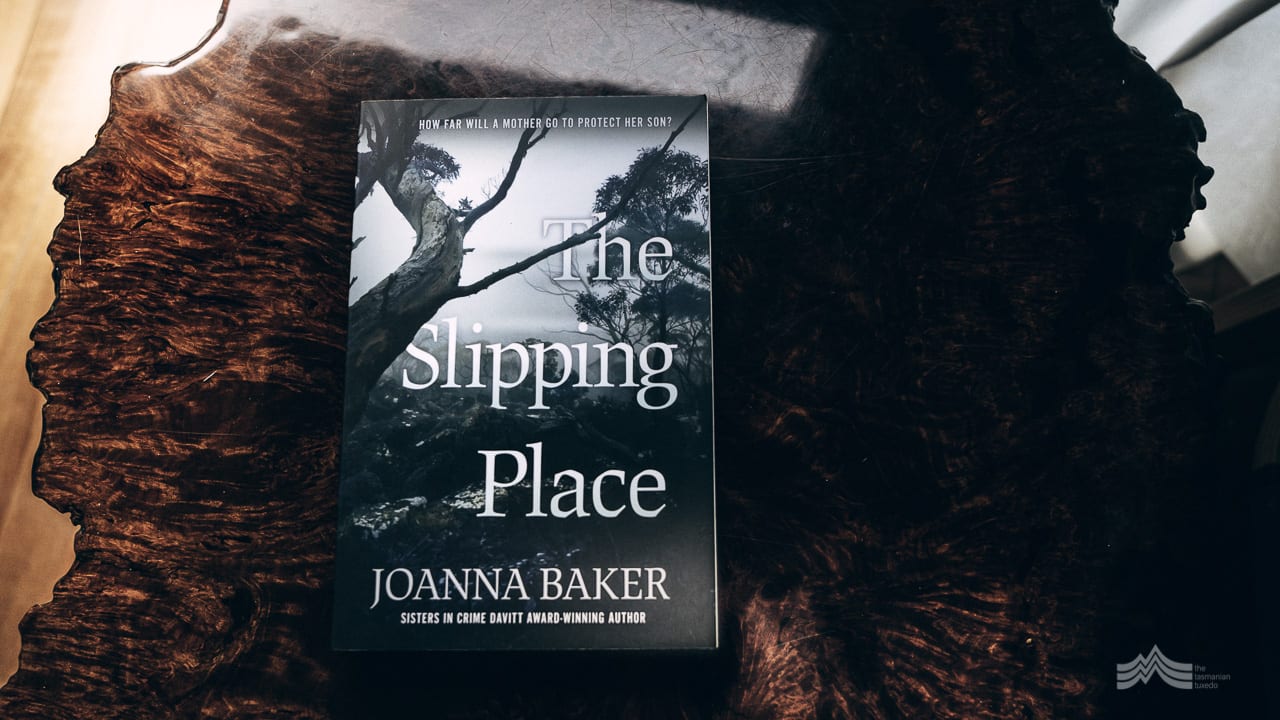 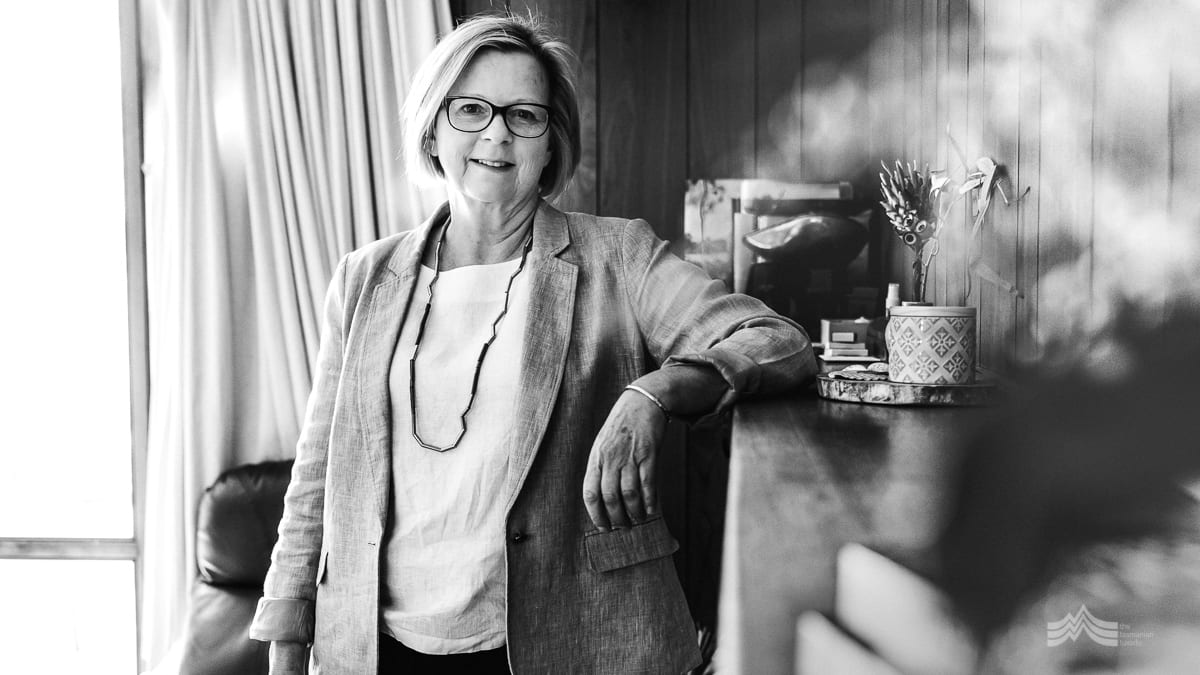 “All writers are asked about where their ideas come from. Most writers will agree that they have no shortage of ideas, and I’m no different. The ideas are the easy bit. It’s the craft of writing that’s more difficult. My PhD certainly gave me clarity around what I wanted to write and really helped me find my niche.”

Although having spent a large portion of her adult life interstate, Joanna says Hobart has always felt like home. “I have always come back here, several times a year. I grew up on Hobart’s eastern shore, looking across at the mountain, Cornelian Bay and the Botanical Gardens, then under the bridge to the city, and out to Storm Bay. It was only after I had lived on the mainland for some years that I started to appreciate what an extraordinary outlook that was.”

Speaking of that sense of home, Joanna says, “It’s a very large statement. It’s complex and deep. It refers to what kind of landscape we find comfortable and beautiful, but it is also more than that. It is something about deep understanding.”

The future undoubtedly holds more fascinating works from this Tasmanian author. “Yes, I have a few books on the go at the moment,” Joanna admits. “They’re set in small Tasmanian towns rich in mystery and melancholy. People often say that when they read this genre they like to learn something along the way. With so much intriguing history and landscape, writing here is like a dream. It’s a privilege to be able to weave in elements from my home and places I visited regularly as a child.” 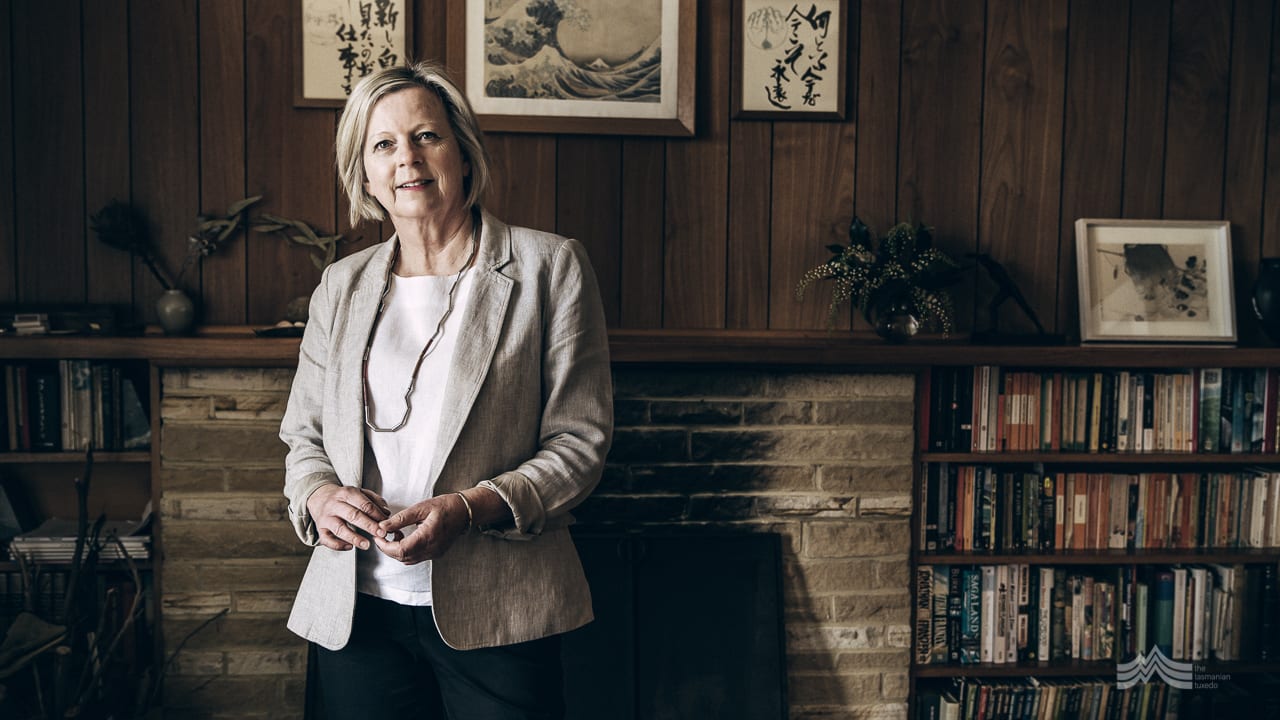 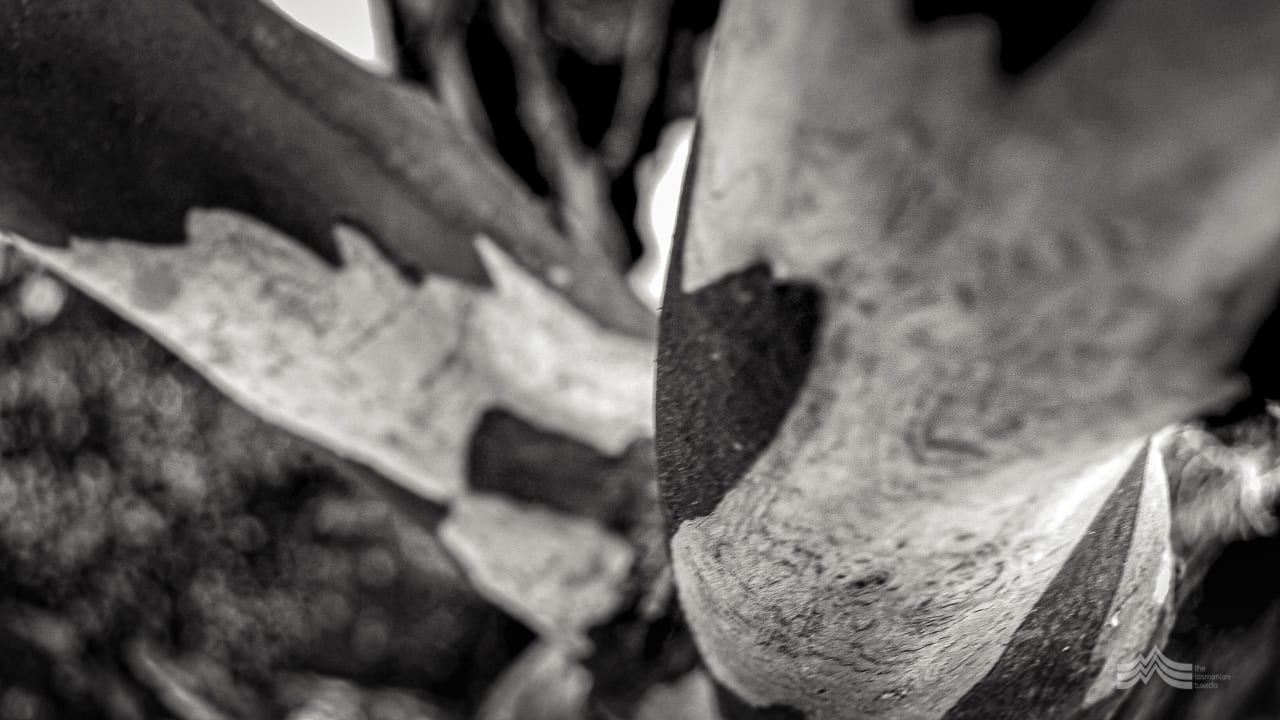 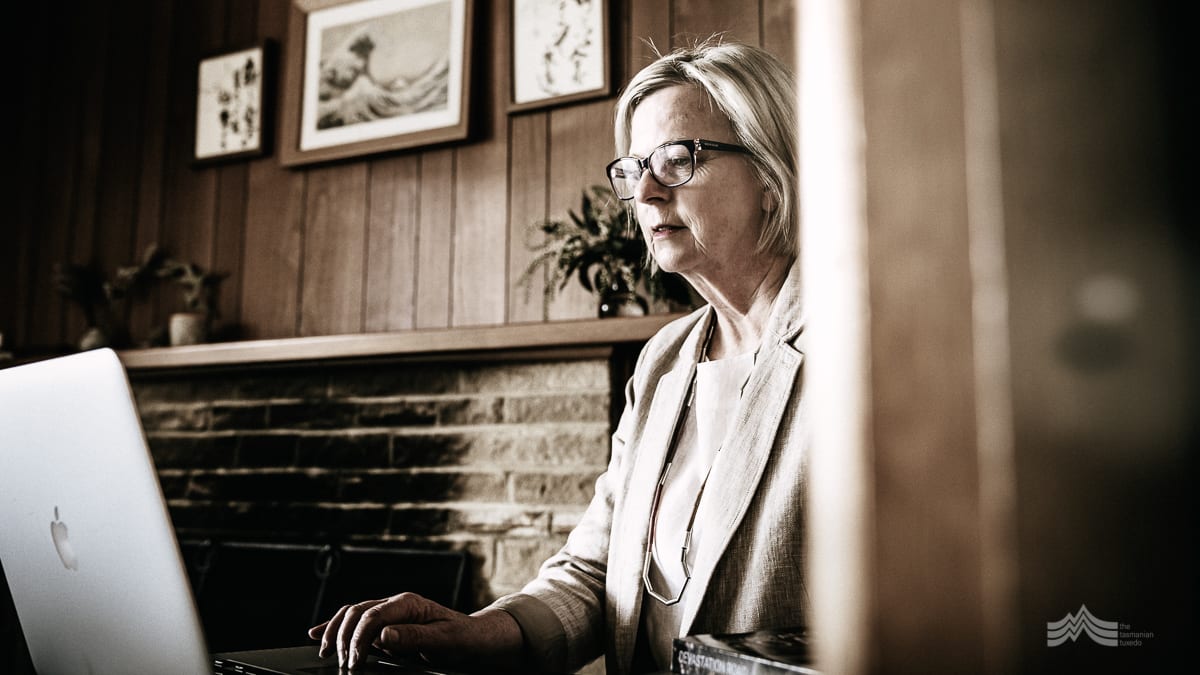 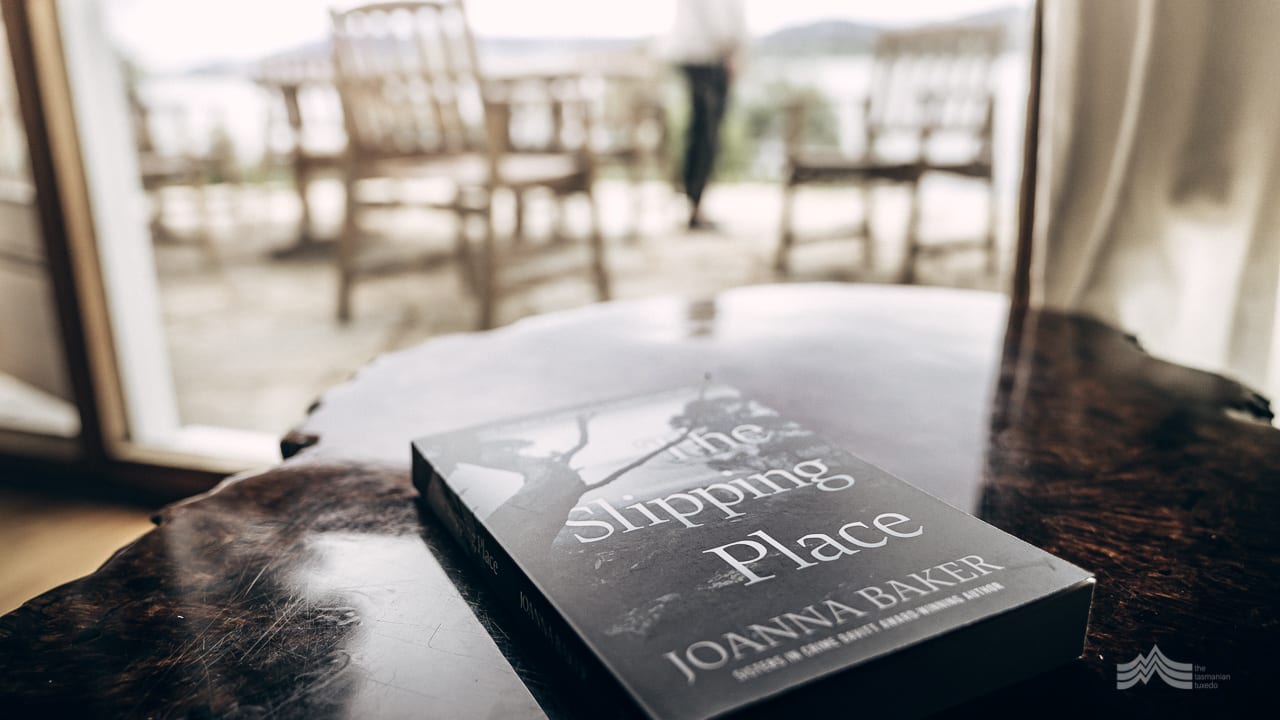 The Slipping Place is available in all good bookstores. Joanna has also recently launched The Elsinore Vanish, the long awaited sequel to the award-winning Devastation Road.

You can read more and order your own copies via Joanna’s website.