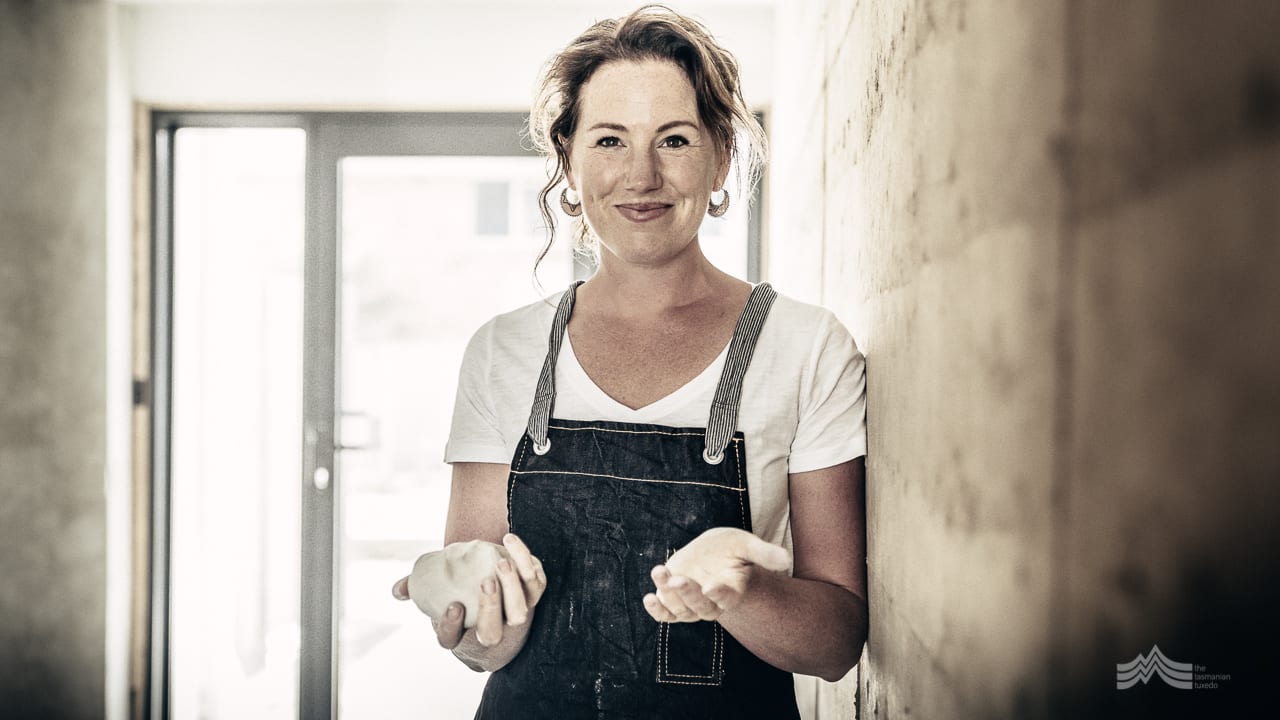 ‘She lived in an old cottage by the sea…’

Sarah Webb’s simple tagline captures not only the very essence of her business, but also her lifestyle. She does indeed live in an old cottage by the sea. A special cottage steeped in local history that has become an integral part of her own story.

Perched on the waterfront in the tiny coastal town of Lewisham is Thorne Cottage. The character-filled, sandstone gem is one of the oldest buildings in the area. Dating back to the 1820s, the cottage was built by Samuel Thorne – a marine quartermaster who sailed from England in 1803. After a failed attempt to settle in Port Phillip Bay, he continued south and was amongst the first European settlers to arrive at Sullivan’s Cove in Hobart.

Sergeant Thorne was offered land close to Hobart Town in Battery Point, however he favoured the ‘rolling land from Lewisham to Pitt Water’ that he had originally sighted. Thorne Cottage was built a stone’s throw from the sea, and soon overlooked a small bustling port alive with jetties and storehouses. 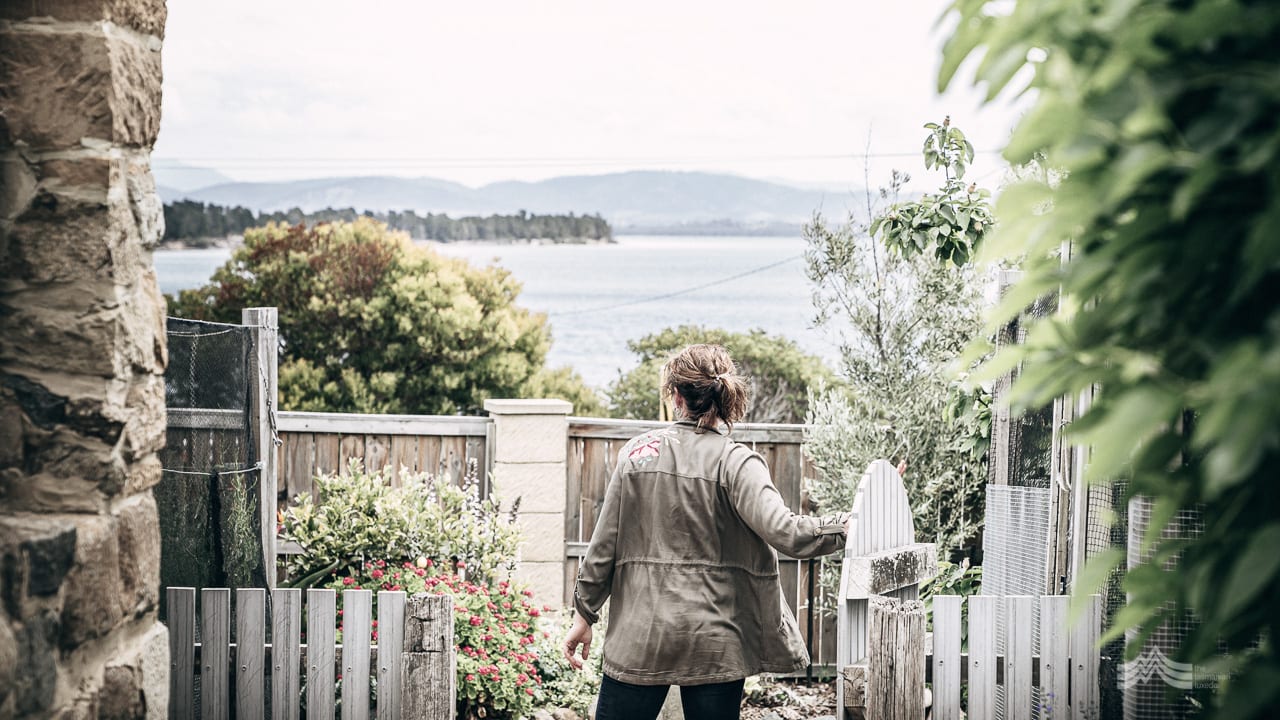 Whilst the surrounds have changed somewhat, the home has remained intact and the views just as glorious. Sarah explains, “It was really my husband Phil who fell in love with the place. He drove the purchase of it as I wasn’t all that taken with the idea of the renovation.” She smiles before adding, “It was, and still is, a lot of work. But it has also become an important part of the fabric of our lives.”

Together, Sarah and Phil have been painstakingly restoring Thorne Cottage for the past decade. “We’ve uncovered lots of fragments from the past during the renovations,” says Sarah. “A myriad of old pottery, bottles, china, horse shoes, rabbit traps, old pennies…you name it, we’ve found it in the garden. Every time we have a big rain, more and more fragments come to the surface.” 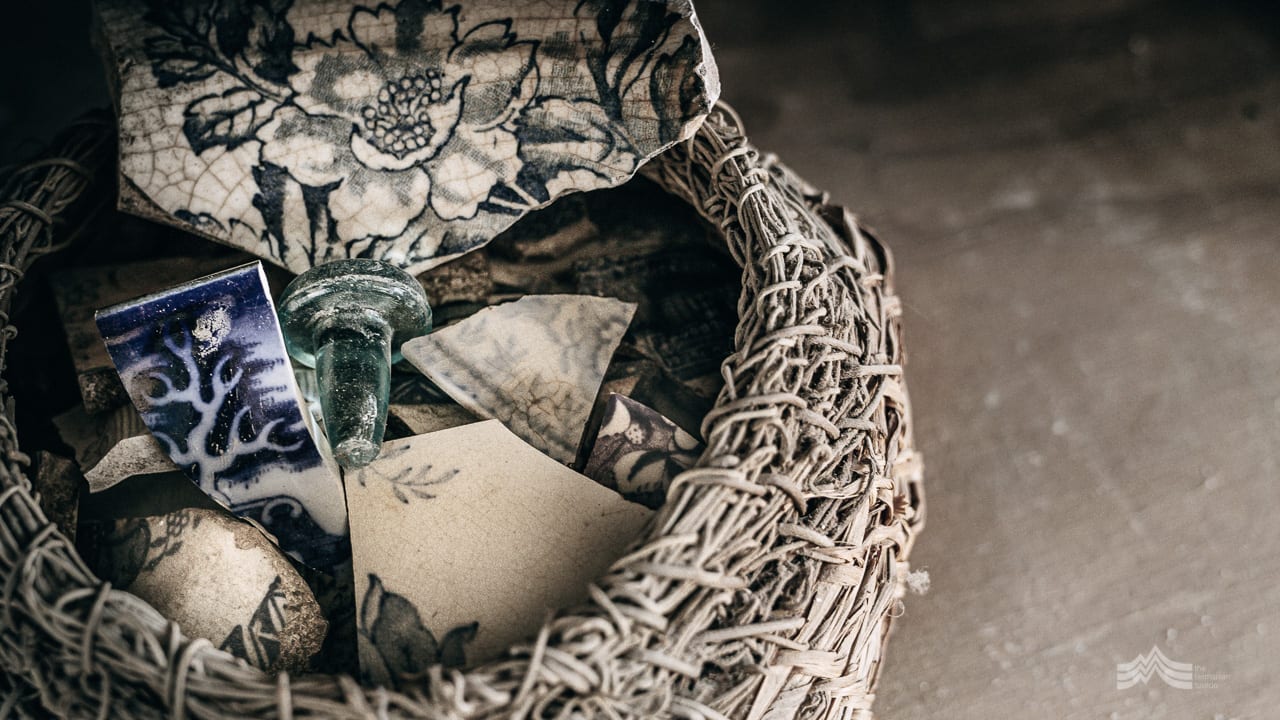 Tasmanian born, Sarah’s earliest memories are of using her imagination. “My mum was very supportive of us as creatives. She was always encouraging us and I recall lots of happy times with butchers paper lining the exterior walls at home so that we could create huge murals.” Sarah pauses before adding, “If she were here now, she’d undoubtedly be taking credit for the fact that I’m earning a living from being a creative. She would have really loved that.”

Whilst Sarah never had a firm notion about how her career would unfold, tracing her childhood unveils further clues of her trajectory. “My parents also had a market stall and that gave me an outlet to sell little things that I would make. It also gave me the foresight to understand that it was possible to earn money from a creative pursuit.”

A university journey initially took Sarah down a pathway towards natural sciences. “As things turned out, I fell in love and never finished that degree,” she laughs. “But it did spark an interesting phase in my life and saw me support myself by working in hospitality…as a chef. Essentially, it was another creative pursuit, but one that allowed me to travel and work at the same time. I spent much of my twenties living in a bus and roaming the east coast of Australia. That was a fantastic, nomadic lifestyle and I found communities scattered along the coast that I really felt were my people.” 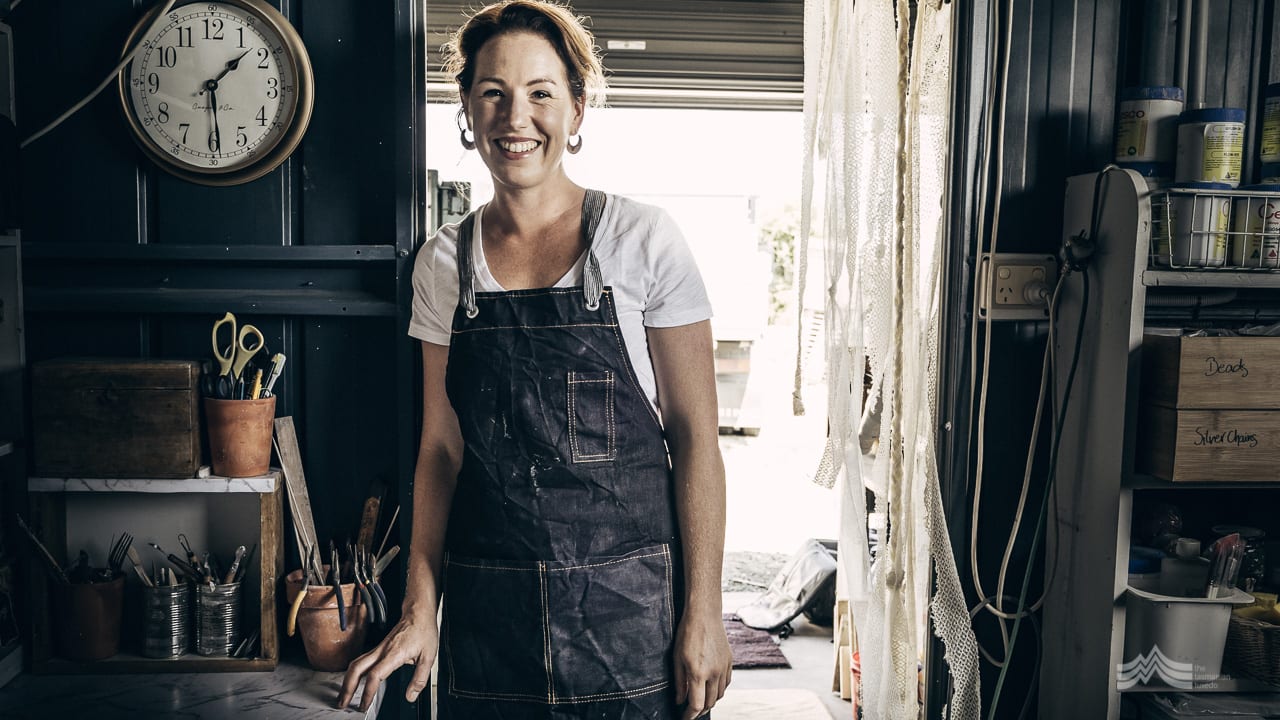 Sarah explains that about 10 years ago she felt a real pull to return to Tassie. “My youngest sister was about to have her first child and I think that was a big part of it. As fate would have it, just after I returned home, my mum fell ill and passed away shortly after. I guess you could say that there was a lot of change in that period.”

The third in the series of major events was meeting husband Phil. “I certainly wasn’t looking for a relationship at the time,” smiles Sarah. “But he turned out to be everything I didn’t know I needed and we’ve been together ever since.”

Enter the couple’s settlement at Lewisham and, at around the same time, Sarah’s love affair with ceramics. “I started playing around with mud and did a couple of adult education courses,” she recalls. “It’s funny, you know, because the more I learn, the more I realise I will never know everything.”

“Ceramics just appealed to me as something I hadn’t tried,” she describes. “I started out hiring space in a kiln, then I borrowed one, and then finally I bought my own.” With a cheeky grin she adds, “And now I have three of them.” 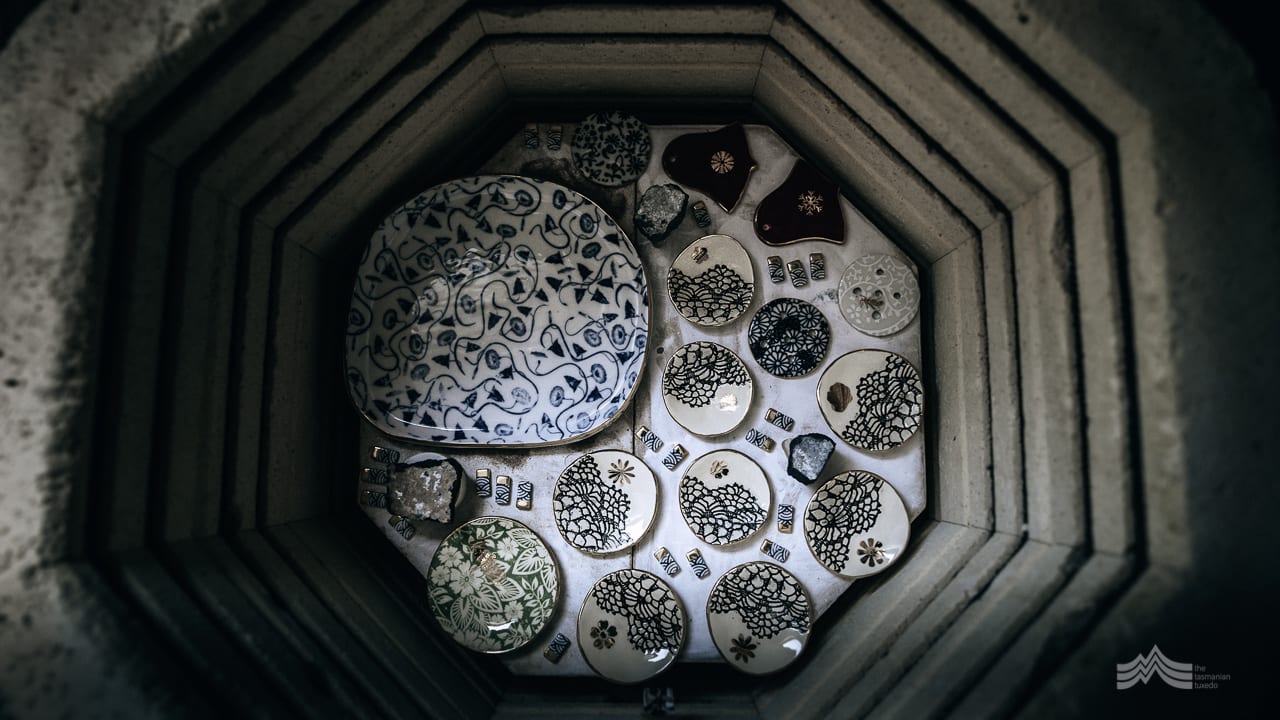 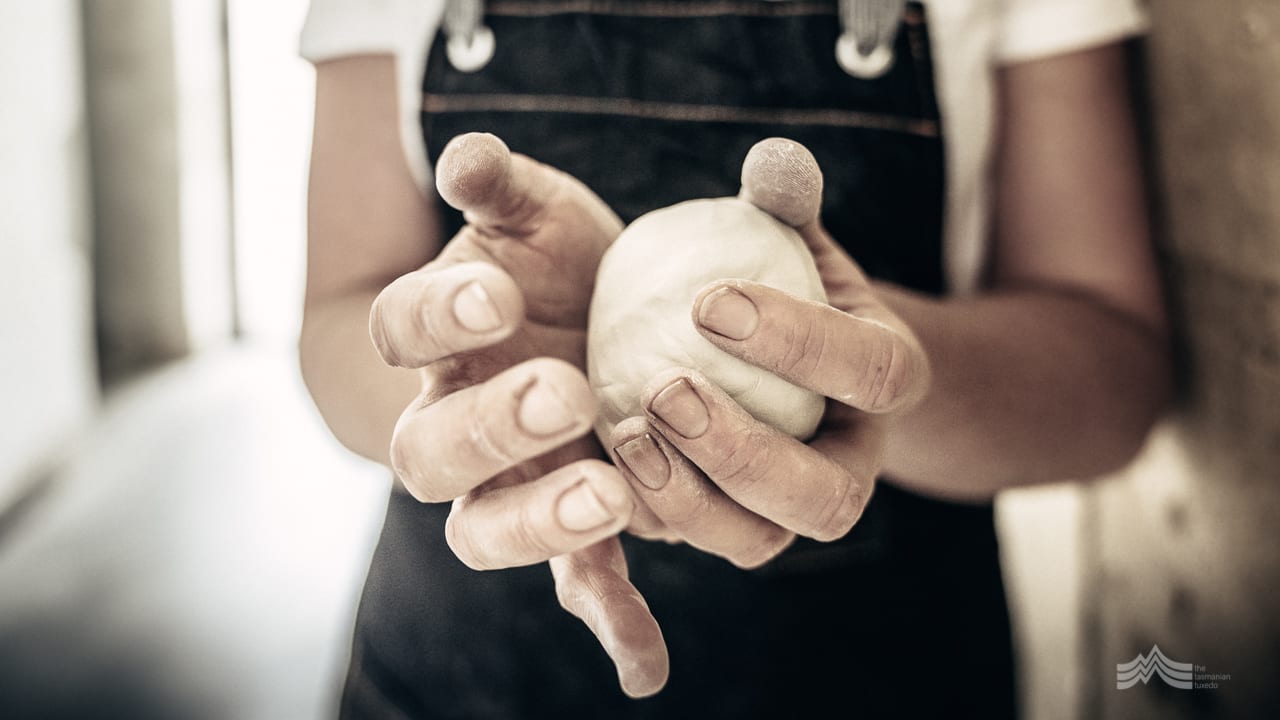 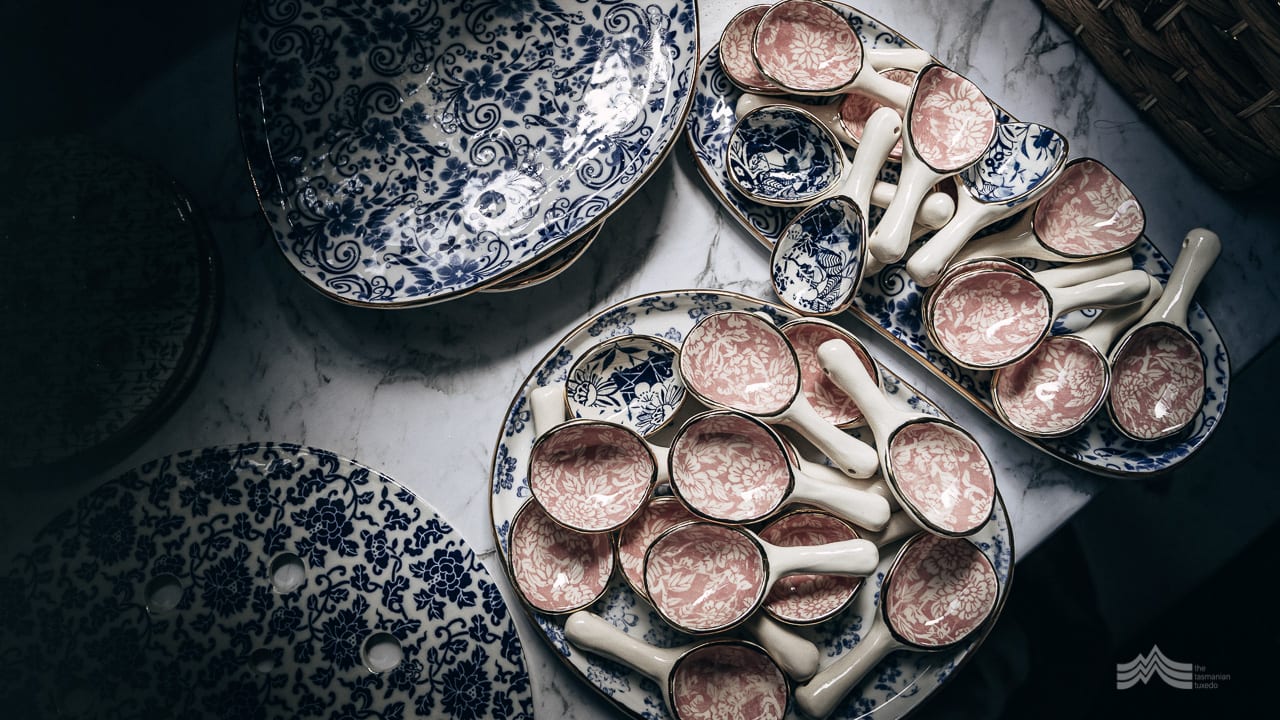 Those three kilns are crucial to Sarah’s creative process. “Most of my work requires three firings, so having three kilns means I can keep the entire process moving,” she explains. “The first firing hardens the clay, while allowing it to remain porous. The second occurs once I have decorated the piece, and a third is required if I am adding the gold lustre that has become a bit of a signature to my work. That final firing is at a lower temperature and allows the gold to bond to the surface of the glaze.”

Sea Soul Studio has evolved beautifully over time. Sarah’s bohemian collection of sea-inspired wares are handmade and fittingly reflect the characterful cottage she calls home. “I’ve definitely been inspired by my surrounds,” she nods. “I grew up spending summers in this area and I loved it. I love to use natural materials and you’ll see that reflected in my collection.”

“The vintage crockery I’m regularly unearthing, the sea being so close, and the families that have come before me here – they all play a part in my design process too. Sometimes when I find a new piece of china buried in the garden, I stop and think about how once that piece was previously treasured by someone. It was once carefully wrapped and transported all the way here from England…perhaps close to two centuries ago. I hope that one day my own pieces will be treasured and passed down through generations in the same way.”

“My work is designed to last, to be enjoyed, and to have purpose. I love the idea that my pieces are used both every day and on special occasions. Maybe in another 200 years, someone will be digging up fragments of my work on this very same site.”

Beautiful dishes and spoons, handcrafted ornaments, jewellery and homewares emerge daily from Sarah’s characterful garden studio. “I’m in the studio most days,” she grins. “I don’t throw on a wheel, it’s not for me as I have a few tendon problems that date back to my days as a chef. I tend to work much slower, slab forming, pinching and hand casting.” 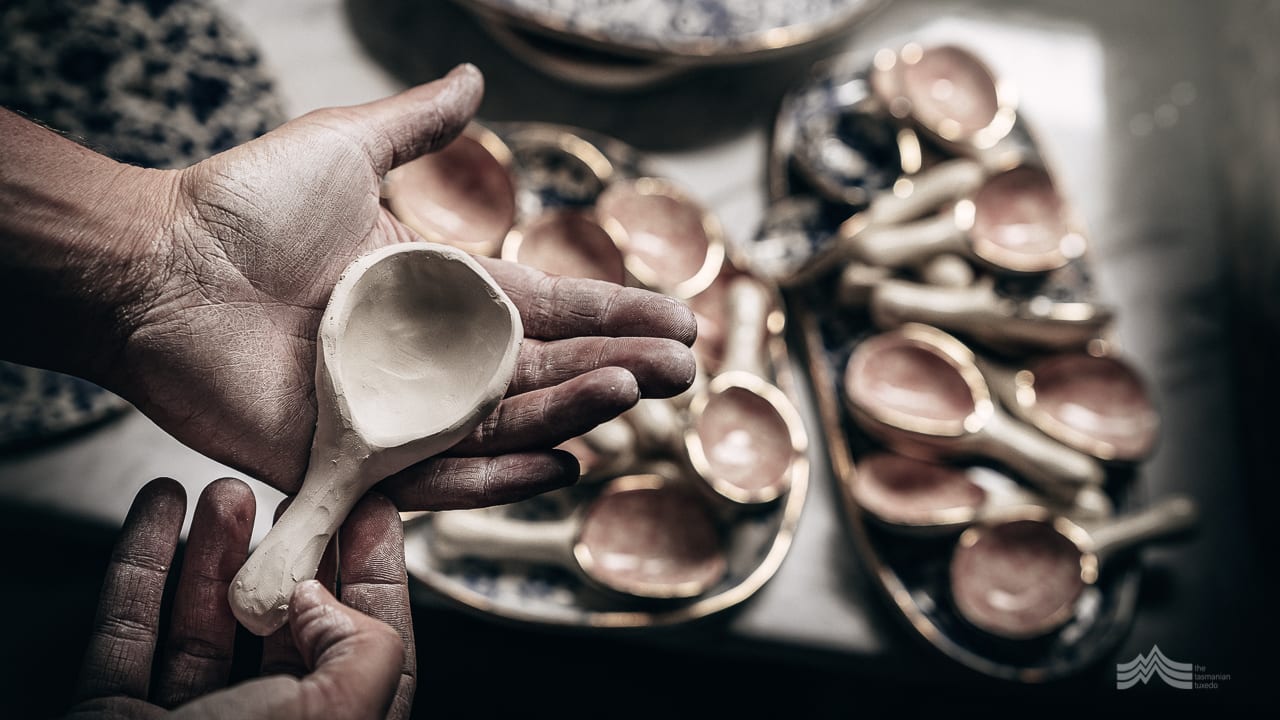 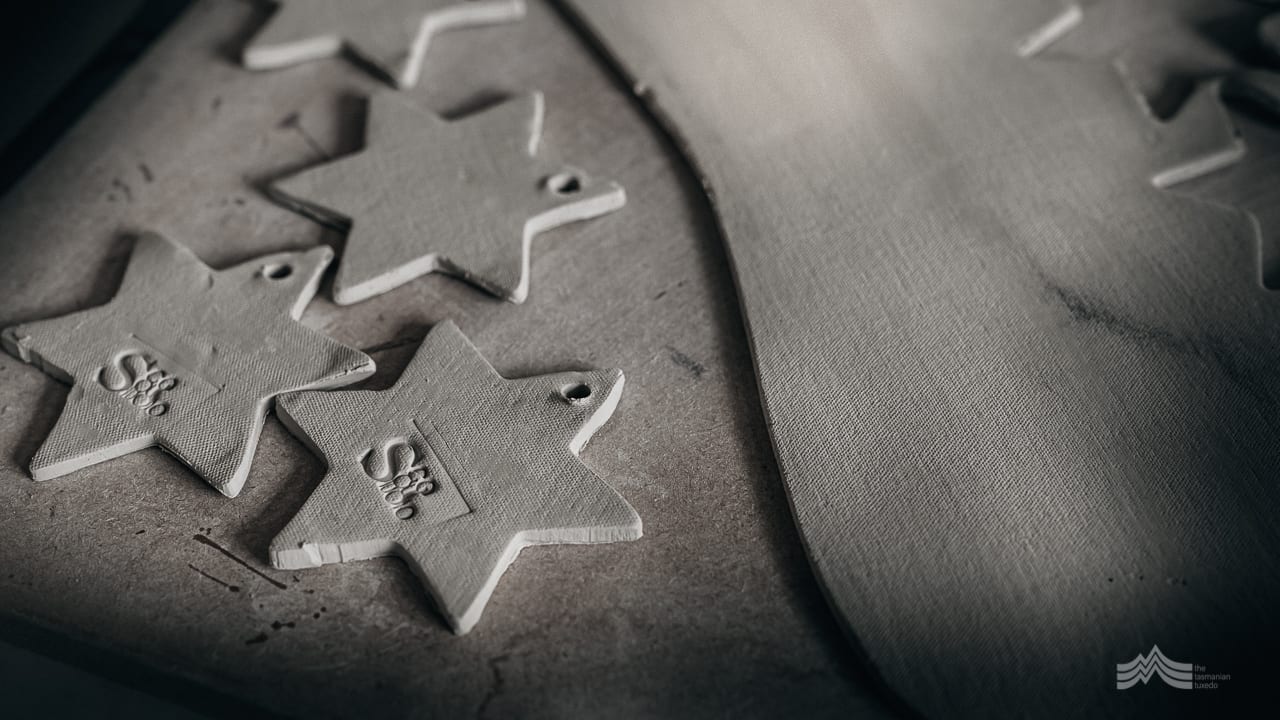 “This was just for my own interest initially, but then I started to think about working for myself and what that lifestyle could look like. After I started to sell a few things, I really got into a rhythm and things just went from there. I went into a co-op gallery in Salamanca Place and that certainly helped connect me with the local arts scene in Hobart and led to a series of exhibitions and design markets.”

Coastal blues and whites are dominant in Sarah’s work, but the same tones are clearly drawn from the vintage china that surrounds her daily. “I love those textures too. I might use the imprint of an old doily or some lacework,” she says. “They are just beautiful.”

As Sea Soul Studio grew, Sarah became a casual stallholder at Salamanca Market, and today the business is a permanent fixture on the market scene. “Salamanca has become very important to me in terms of feedback,” she explains. “When I’m testing a new product, I’ll often make it in a few different colours and sizes and then see what resonates with people on any given Saturday. I can soon tell what will be popular, and surprisingly, it’s not always what I would have predicted so having that test market there is a real blessing. It tells me very quickly what’s going to sell and what isn’t.” 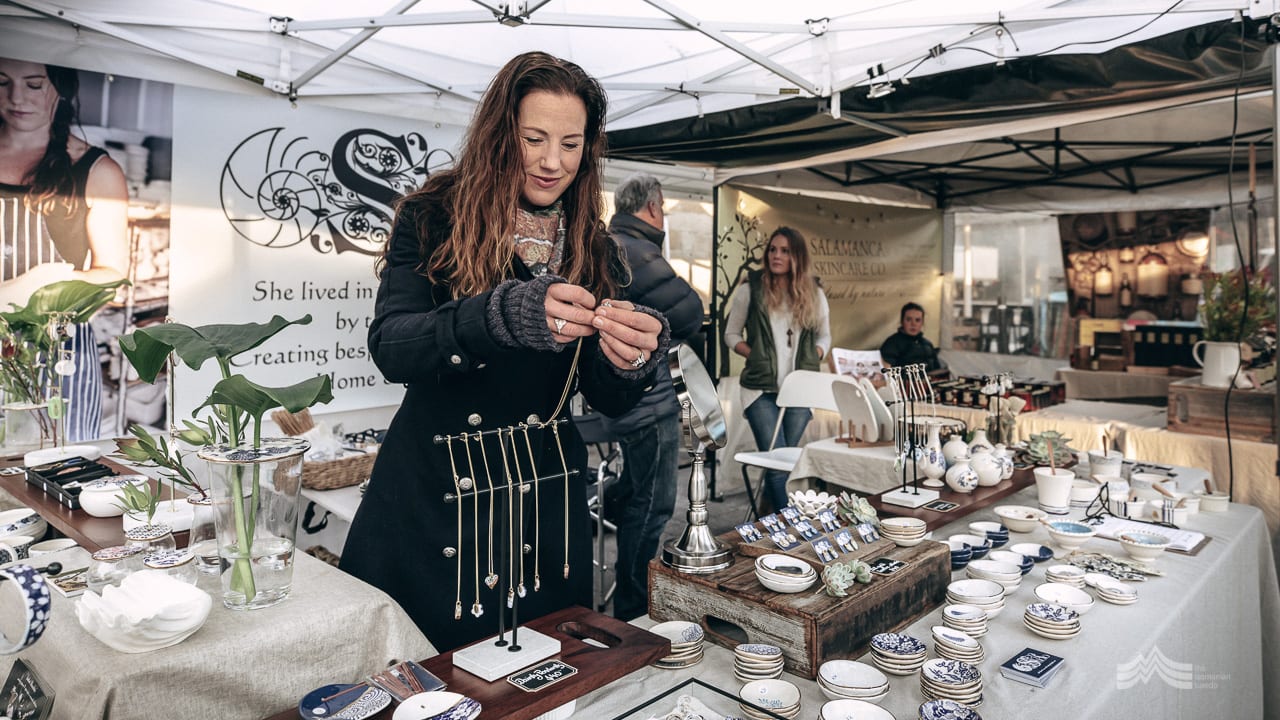 Best sellers today include Sarah’s earthy ‘siren’s spoons’ – a striking combination of a ceramic head and a handle fashioned from local driftwood, her beautiful range of small dishes that can be used to hold anything from chutneys and spreads to teabags and chocolates, and the newer lily pad vases.

“The lily pad vases have been a real hit,” says Sarah. “They are special one off productions designed to showcase both the flowers in an arrangement as well as the stems. They make great centrepieces and I now make them in a range of different sizes.” It’s an effective design that is taken to the next level by Sarah’s keen eye for detail – a handcrafted ceramic disc is carefully decorated and then rimmed with gold. It then sits snugly on top of a glass vessel. Each stem sits separately, making the arrangement easy to put together.

Sarah’s tasteful eye is evident in the stylish interior of her own home. It’s an eclectic mix of old and new that merges perfectly to create a relaxed, welcoming vibe. “I get a lot of joy out of creating a feeling in a space,” she says. “Connections are important to me and so is community. One thing I have definitely learnt about myself is that I’m someone who enjoys bringing people together. It’s often through creating shared experience and food forms a big part of that,” Sarah continues. “This house is a great example too…it’s the sort of property that should be shared and I love having people over here – preparing the place for a great night…food, movies, quiz nights, fancy dress…you name it, I love it!” 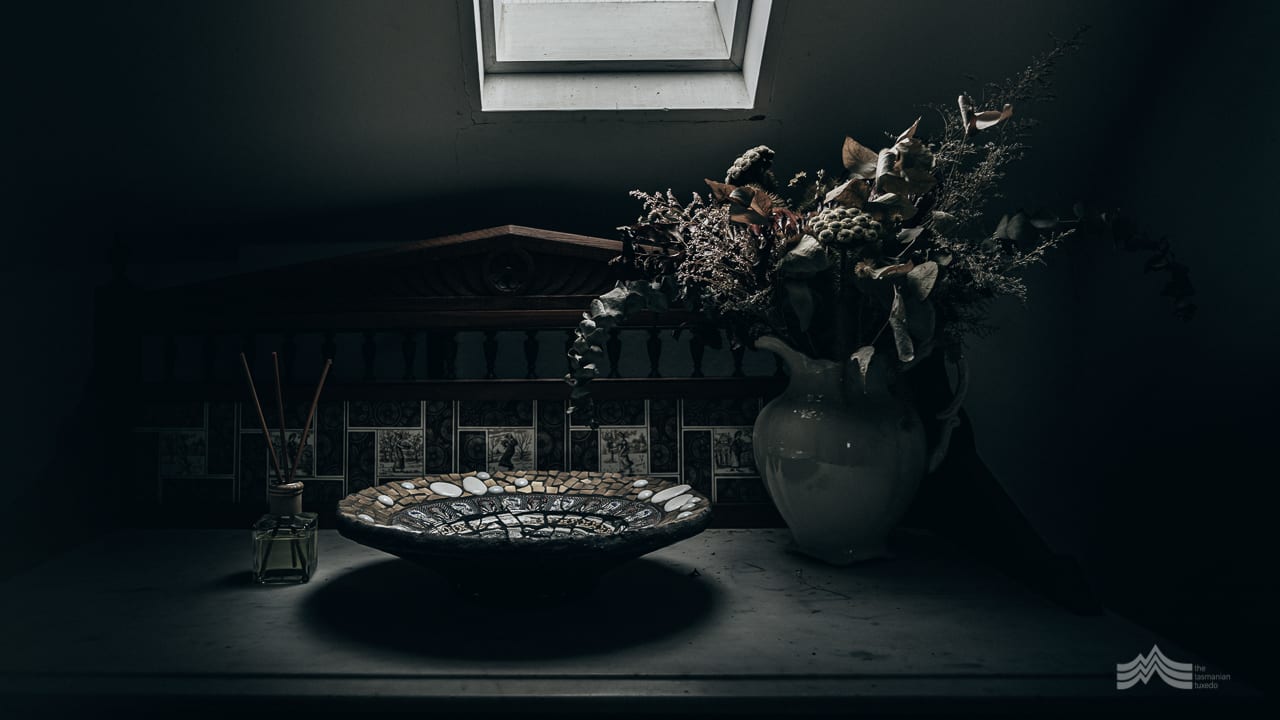 Unwinding to Sarah and Phil is having a bunch of friends around and entertaining in their stunning seaside garden. The ‘ruin’ as they call it, is a beautifully sunken outdoor dining space sheltering a generous dining table and pizza oven. It’s gently bound by reclaimed bricks and creeping vines to shelter guests from late afternoon coastal breezes. “It’s a compromise between Phil’s desire for a convict wall and my dream for a French style conservatory. It’s turned out to be a great space for a party, or simply to lounge around in,” grins Sarah.

As her two dogs, Milton and Tilba, dash around excitedly, it’s clear they hold a special place in Sarah’s heart. “Oh, he’s pure joy in a fur coat,” she murmurs, scratching Milton’s head. “He’s never jumped or nipped…he’s simply gorgeous. However Tilba is far more high maintenance and keeps me on my toes. She’s the naughty one of the pair!”

“One of the greatest things about what I do is that there is always time for play. It’s really mud pies for adults…and I find things just happen.” Hidden away in what she calls her ‘own little cubby house’, Sarah is content to potter about and prepare her wares for the week ahead. “I’m here all the time and it’s just fabulous. Every morning I grab a cuppa, pop on some music and the dogs will bound in and join me too, they love keeping me company.” 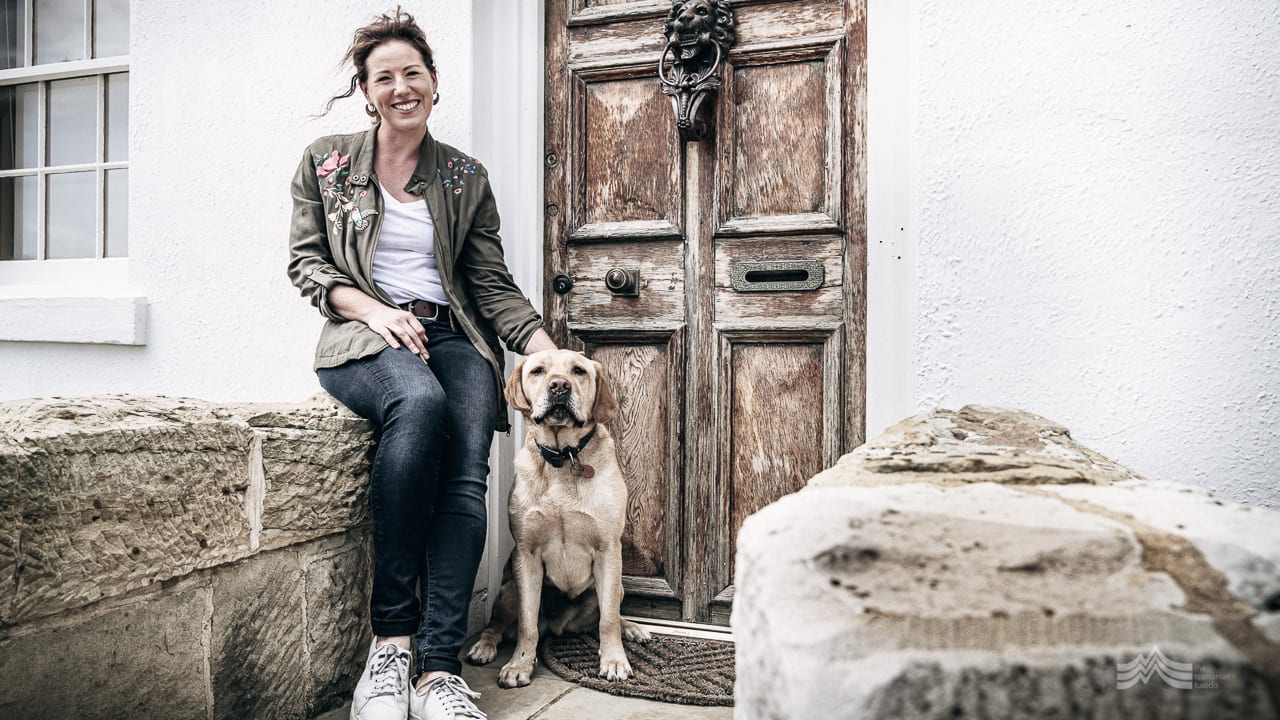 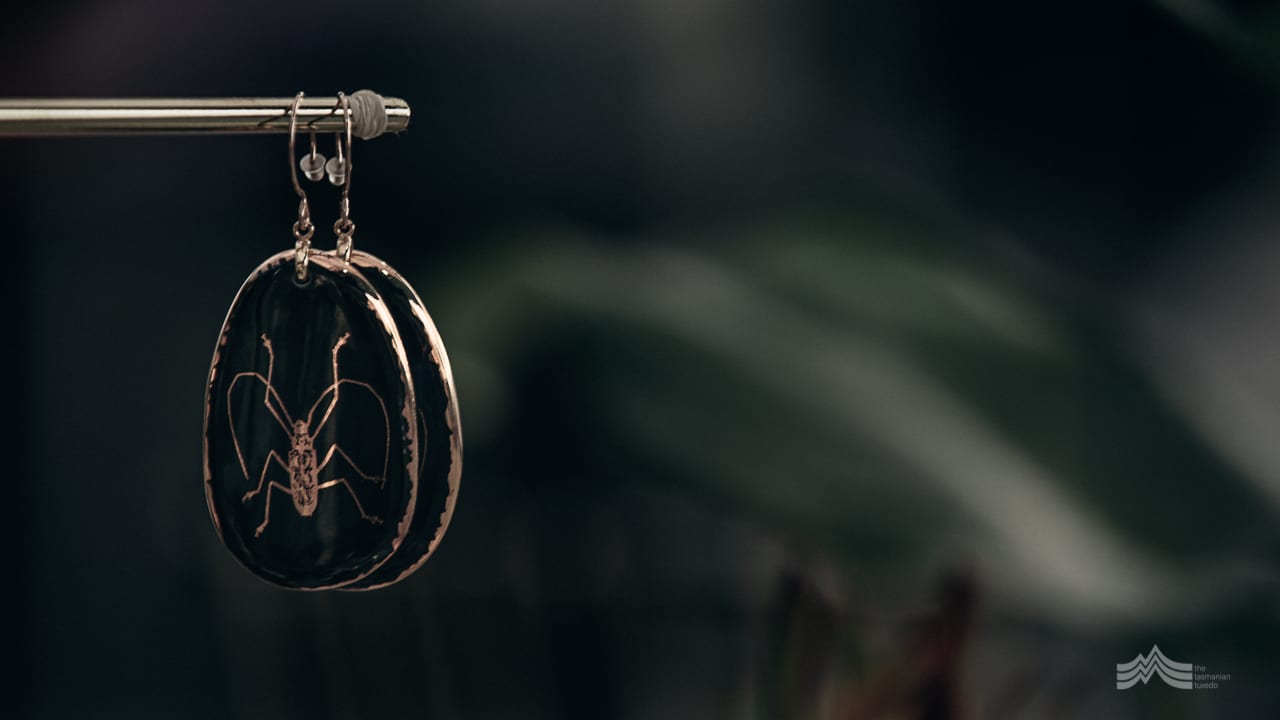 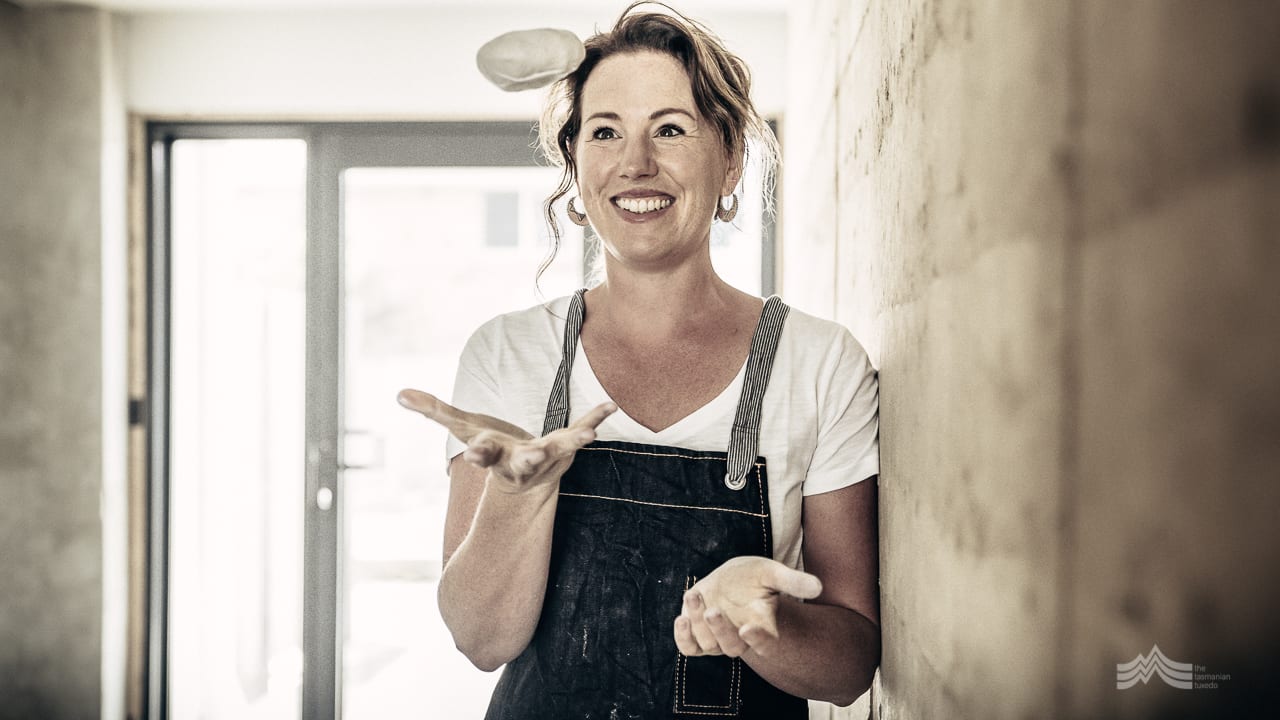 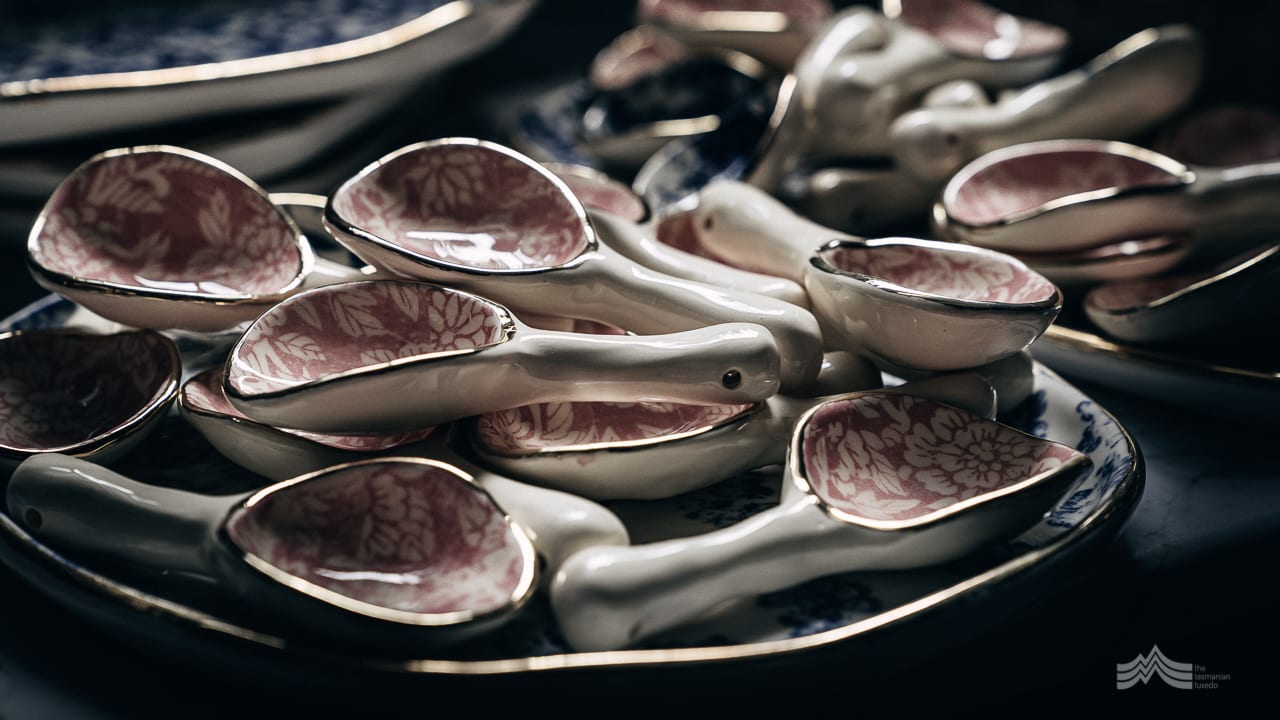 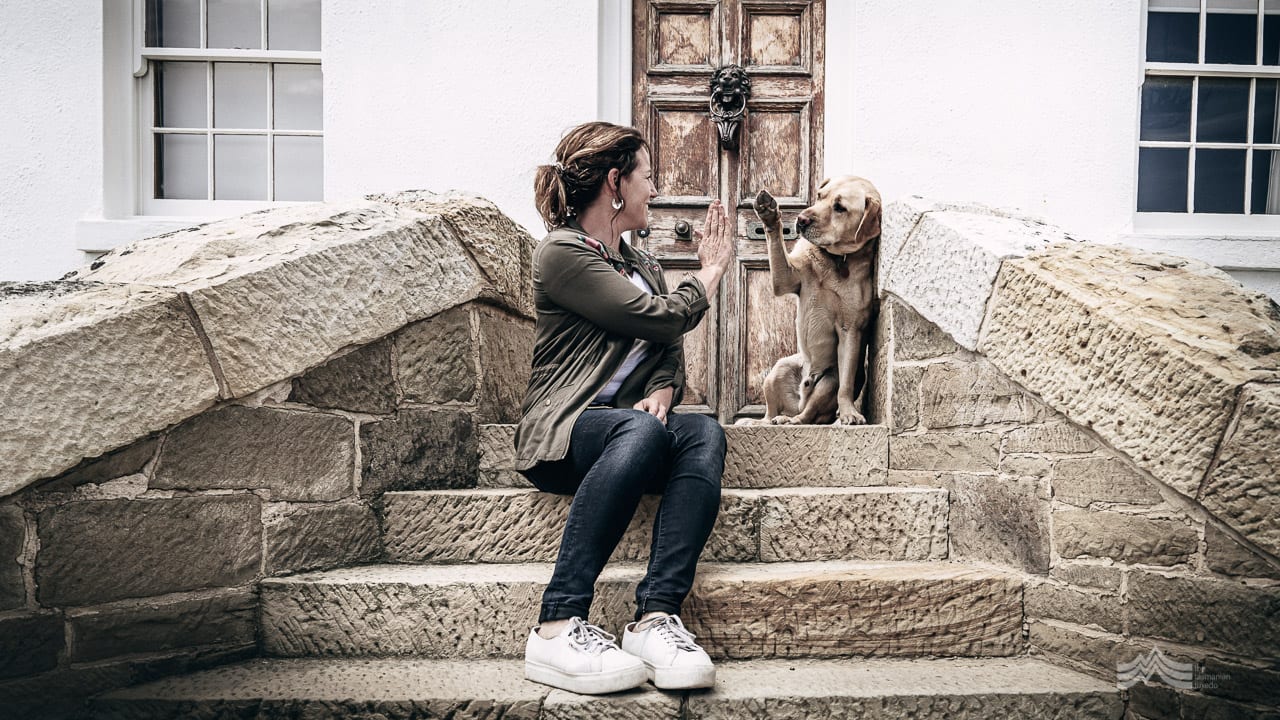 You can meet Sarah each Saturday at Salamanca Market in Hobart, or shop online at Sea Soul Studio.