#16 The story no one ever wants to tell 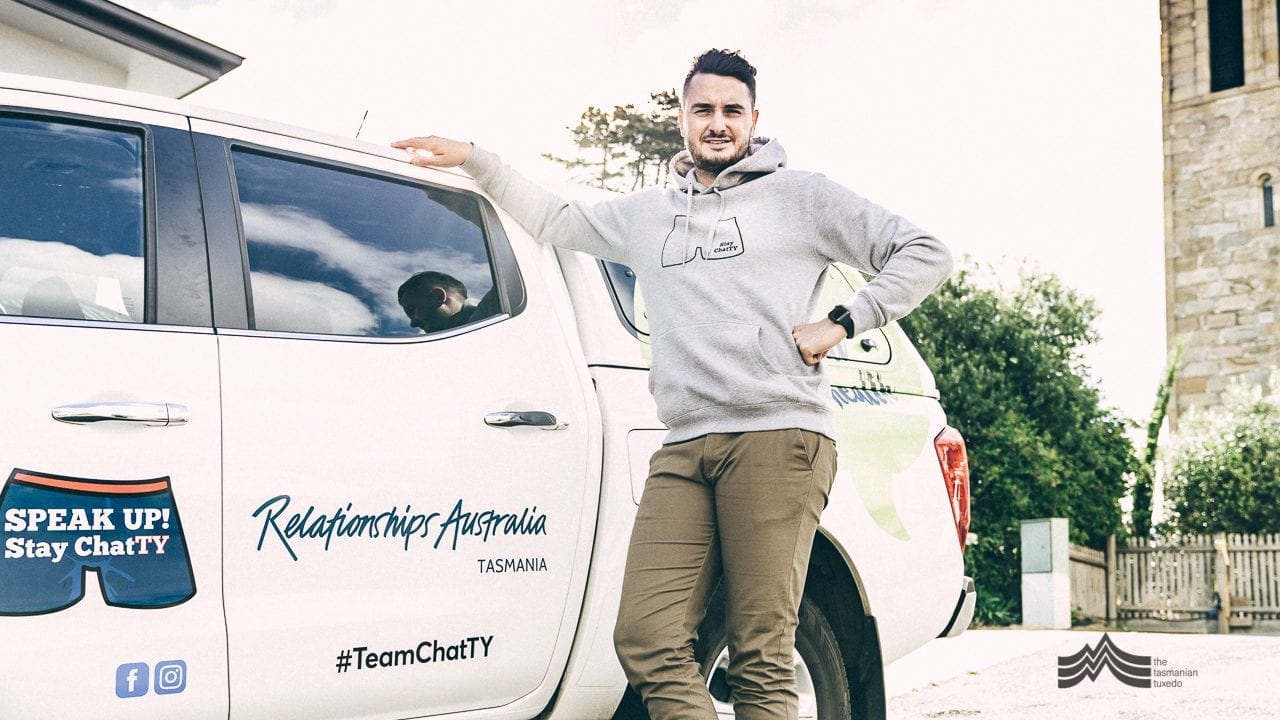 Growing up on Hobart’s eastern shore, Mitch McPherson had a pretty standard Tasmanian childhood. Memories of family outings, barbeques, playing sport and occasional weekends away fill his mind and he easily recalls fun times with his siblings and extended family. However six years ago he found himself in the middle of a story that no one ever wants to have to tell. Losing his younger brother Ty to suicide threw Mitch’s life upside down and kick-started not only change in the McPherson family, but change in the Tasmanian community.

He’s a young man with an open and honest presence. Mitch openly tackles the hard questions but is also self-assured enough to draw an important line to maintain his family’s privacy. “There are many things I’ve battled with since losing Ty,” he admits. “There’ve been a lot of sleepless nights and lonely roads…I’ve often feared it will just take me over.”

‘Total all-consuming grief’ is how Mitch refers to his experience in his recent book, Behind the Smile. It’s a frank and personal account of the six years that have unfolded since Ty took his own life at just 18 years of age. Between the pages you’ll find Mitch’s own healing and the journey that resulted in the founding of SPEAK UP StayChatTY, a mental health and suicide awareness movement that has successfully broken down barriers right across the state. 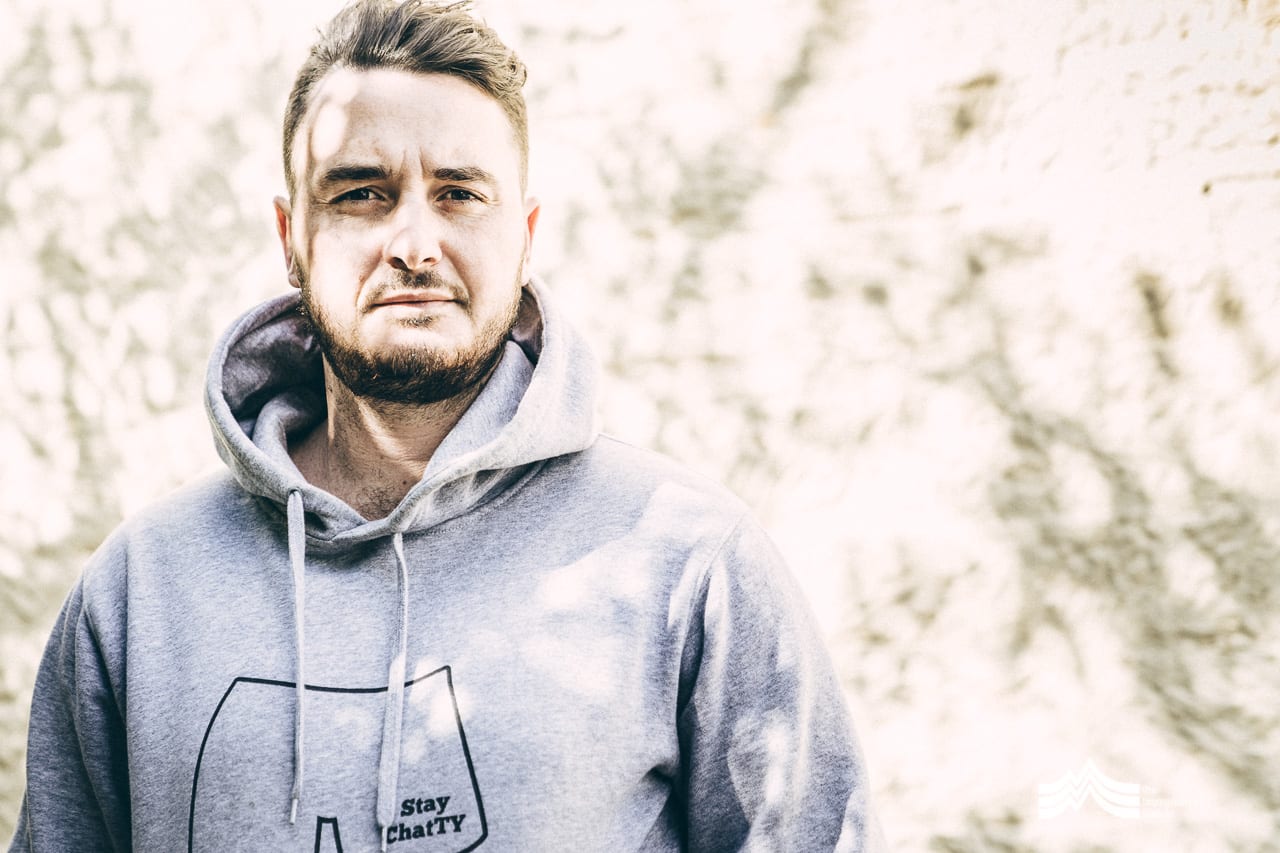 Whilst it’s hard to comprehend the depth of emotions such a situation commands, most of us will agree that suicide is extremely complex and that there is often not just one reason for someone to arrive at such a decision. As Mitch explains, “There are no definite answers to what led Ty to his actions. But in trying to find these answers, I finally had to acknowledge my undeniable ignorance.” Mitch goes on to question how he lived his life without even thinking suicide or mental illness would ever touch his friends and family, and just how he came to realise that Ty had indeed shown signs that things weren’t quite right and that no one had recognised them.

It’s difficult to imagine the emotional turmoil that has unfolded in Mitch’s life. As a glazier in his mid-twenties, Mitch worked hard and played hard. “I’d probably describe myself then as being a typical young Aussie bloke. I was a tradie, I played footy, liked having a laugh with my mates…if I ever had a shitty day I’d put on a brave face and keep it to myself. Back then, I suppose I expected my brother to do the same.” 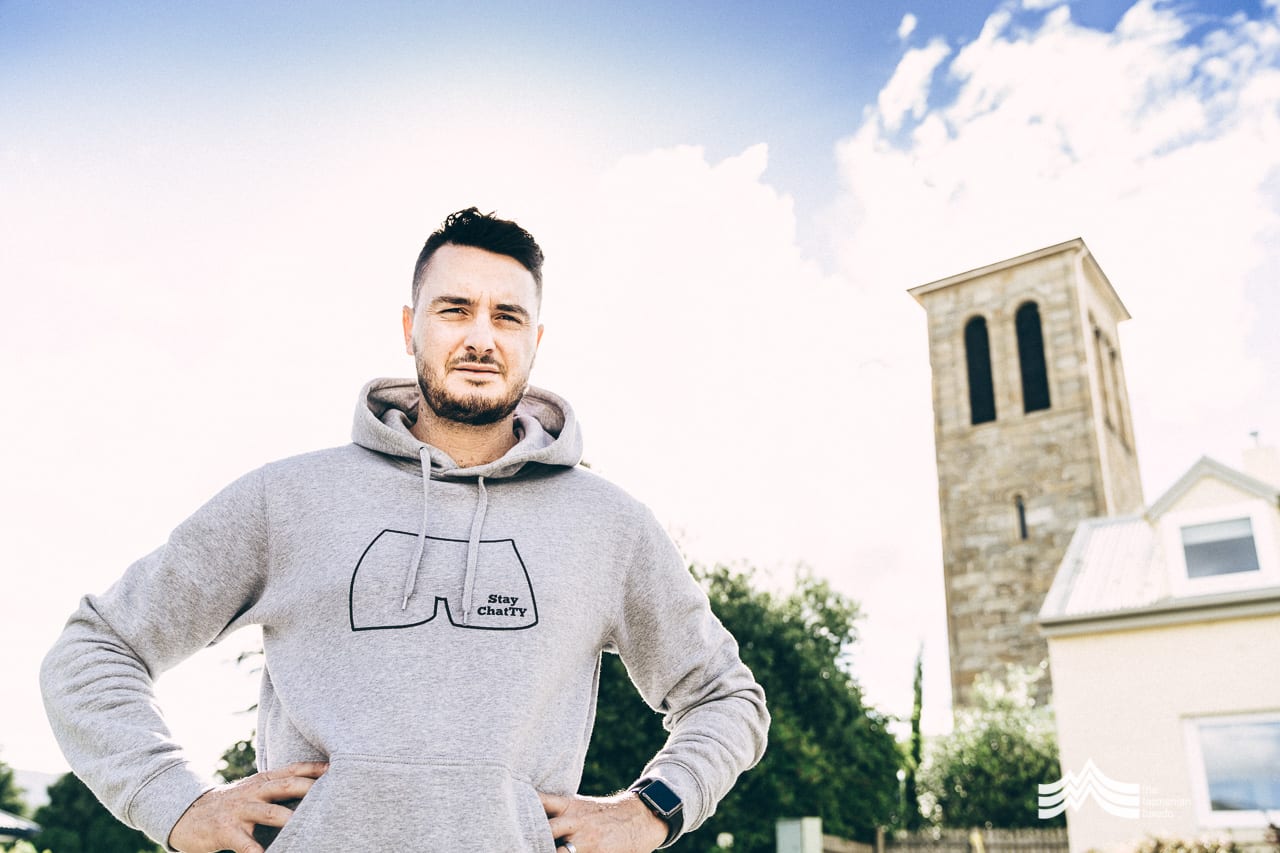 “It took me a long time after Ty’s death to think deeply about the possibility of him not being himself. My initial reaction was that there were no signs this could ever happen…he was happy and ready to face his future.” Mitch continues, “But in actual fact there were signs, it just took me a while to realise it.”

Mitch reflects a lot in his book. He explains how, in hindsight, changes in Ty’s behaviour were indeed there. Little personal details that were overlooked – a change in eating patterns, a shift in demeanour, withdrawal from social situations…little things that in isolation may have seemed insignificant but when pieced together acted like a trail of clues.

Mitch still works through guilt and unanswered questions. “It took a long time for me to learn that if somebody decides to take their own life, that is their decision…I still have to work hard to believe it and accept that it was Ty’s decision.”

Creating a bumper sticker to honour’s Ty’s memory was part of Mitch’s own healing process. He explains, “That’s where SPEAK UP! Stay ChatTY first started.” 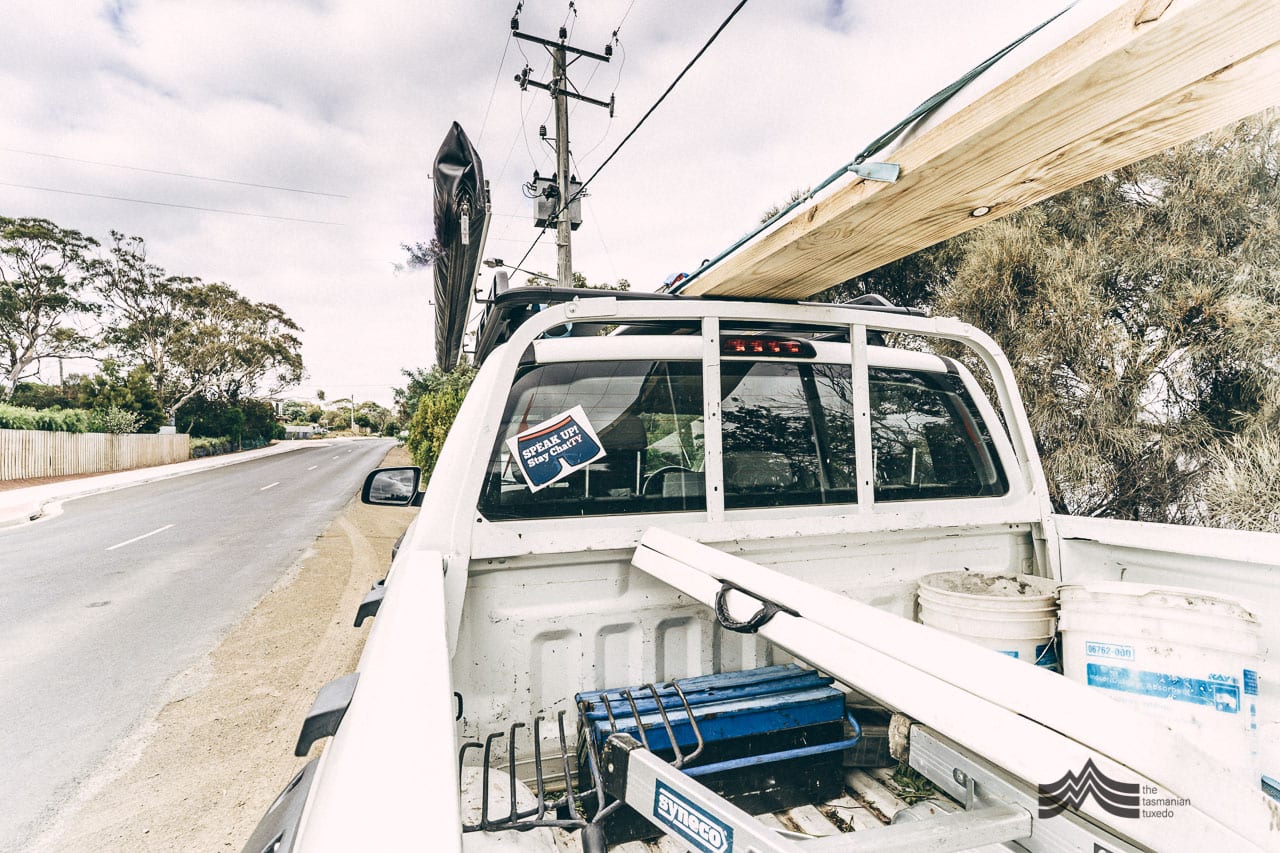 Mitch’s sticker design pays homage to Ty’s love of football. His energetic younger brother loved sport and was renowned for wearing his footy shorts everywhere. What was initially a personal tribute to Ty quickly started making real waves in the local community. “I started sharing the stickers on Facebook and selling them for $1. I’d heard about Albie House, a service trying to get off the ground to provide accommodation for people experiencing suicidal thoughts, and I wanted to donate the money to support their work.”

The campaign rapidly found its own legs through social media and all of a sudden Mitch and his family found themselves struggling to keep up with demand. “I could see a future in this,” says Mitch. “And nothing was going to stop me from turning it into something more.”

The state of Tasmania holds the second highest rate of suicide in the country, with particularly alarming statistics for men and young people alike. “As people started to describe this campaign as a great initiative that could really benefit Tasmania, I started to feel I could find a positive in our family’s tragedy.”

SPEAK UP! Stay ChatTY is now one of the most noticeable car stickers in Tassie and is backed by a program that works to promotes positive mental health and prevent suicide by reducing stigma and encouraging people to seek help. “I think a lot of the success came from my age and the fact that I’m a local,” says Mitch thoughtfully. “I’ve been out and about a lot over the past five years and have shared my story with thousands of people. I think Tasmanians have really embraced me as a young person out there really having a go and trying to make a difference. The response has been overwhelming.”

The growth of SPEAK UP! Stay ChatTY initially arose from Mitch’s numerous speaking engagements. He’s openly shared his own journey with schools, workplaces and community groups. “It’s not just my own story with Ty, but I also share tips on how to spot the signs someone may need support and how to start a conversation. I think Tasmanians really relate to my experience as it happened in their own backyard.”

It’s fair to say the impact of SPEAK UP! Stay ChatTY in Tasmania has been remarkable. “Many people in Tasmania said they hadn’t seen anything like this before,” says Mitch.

“I could never have imagined that I could have created something like this,” says Mitch. “From being a tradie to founding SPEAK UP! Stay ChatTY…my skills have grown so much and I have also grown so much as a person too. I would never have imagined that I could have done some of the things I’ve managed over the past few years. The partnership we now have with Relationships Australia Tasmania is also really important to me.” He stops and thinks for a moment, considering the future. “I want to be a leader for kindness and change. How we treat each other is so impactful. It’s so important that we support the kids of today and that they understand that being different is ok.” 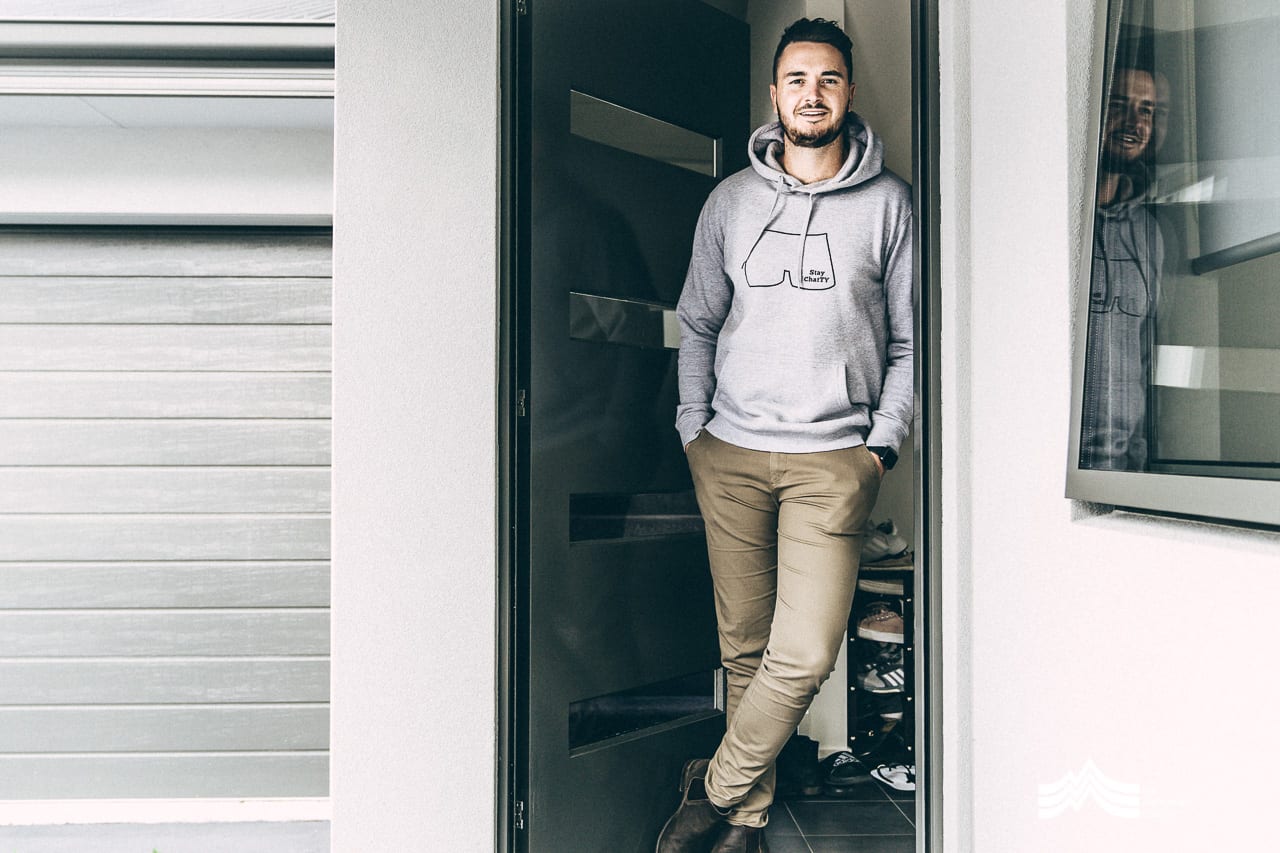 Mitch’s message is now well supported by a skilled and professional team. “SPEAK UP! Stay ChatTY has grown and the team we have are just amazing. We’ve got other staff doing presentations now and this has really helped me as well. I had gotten to the point of doing so many that I found I was losing the connection with my own story. For me, if I’m going to share my story then I want to do it honestly. The tears still well in my eyes when I talk about it, and that’s completely ok. It’s how it should be.”

“It’s rewarding to see the audience clearly connect. I love it when people laugh and cry and really engage with my story. As a community I really think we need to open up a whole lot more. When the audience embrace me and relate…that’s just so uplifting and it opens up so many important conversations. Lots of people come up to me after I finish speaking and tell me their own stories, and they also message me their thoughts later as well.”

Mitch recalls a talk he gave in Hobart some time ago to a group of tradies. “I had about 70 blokes in a room early one morning and I told my story much like I usually do. But this time it really got to me that one of the guys in the front row appeared completely disinterested. He sat reading the paper and didn’t look at me once the whole time. Those kind of experiences always make me question my message.” He pauses before continuing, “But at the end I noticed that same guy went and picked up every single one of my flyers…he took all the information I had. I guess what I took from that is that the most unsuspecting person may be battling their own demons and we should never judge anyone.” 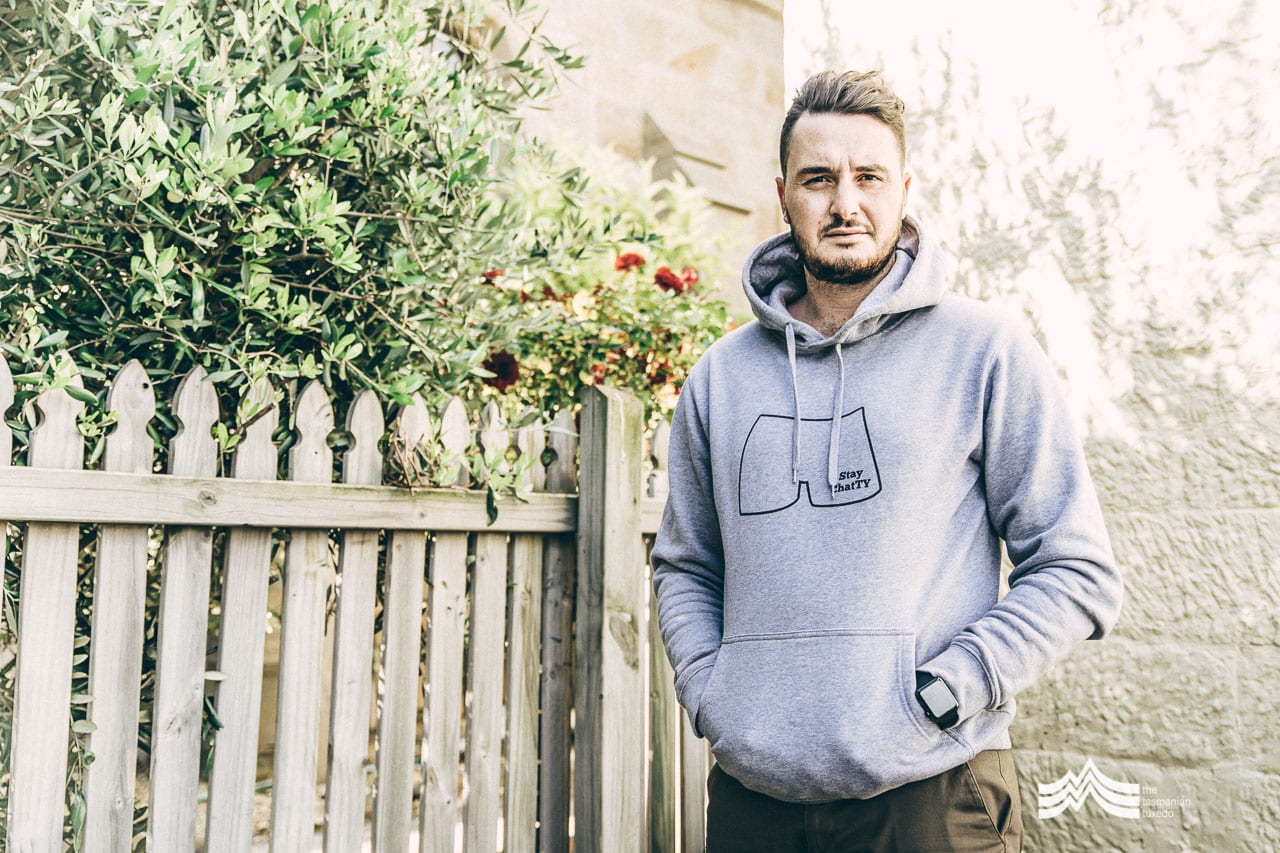 “I’ve definitely changed since losing Ty,” reflects Mitch. “I’m always looking to make amends and if I have an argument with someone, in the back of my mind I’m always thinking, ‘what if I never see them again?’ It’s always with me that this may be the last time I see them.” His thoughts continue along similar lines, and Mitch remains very open about his current mindset. “I have a real fear of tragedy now. I’m a real worrywart and have become very cautious. I used to be really carefree when I was younger…but I’ve lost that now.”

“I also need to remain conscious of my own mental health. I am always touched when others share their stories with me but I need to remain aware of what effect that can have on me. It can be draining dealing with these issues constantly and I’m grateful I have a professional team around me that provide me with boundaries, support and guidance. Self-care is really important.”

Mitch continues, “I’ve learnt a lot about myself in the past few years and grown enormously as a result. I really wish that it didn’t take what happened to get me to be the best version of myself…but I know I’m much kinder now, more understanding, and I appreciate the little things.”

“The life I lead these days has much more meaning. I’m not a counsellor, but my purpose has become to open up some important conversations around mental health and to make connections. I feel blessed that I have been able to find purpose and live my life with intent.” 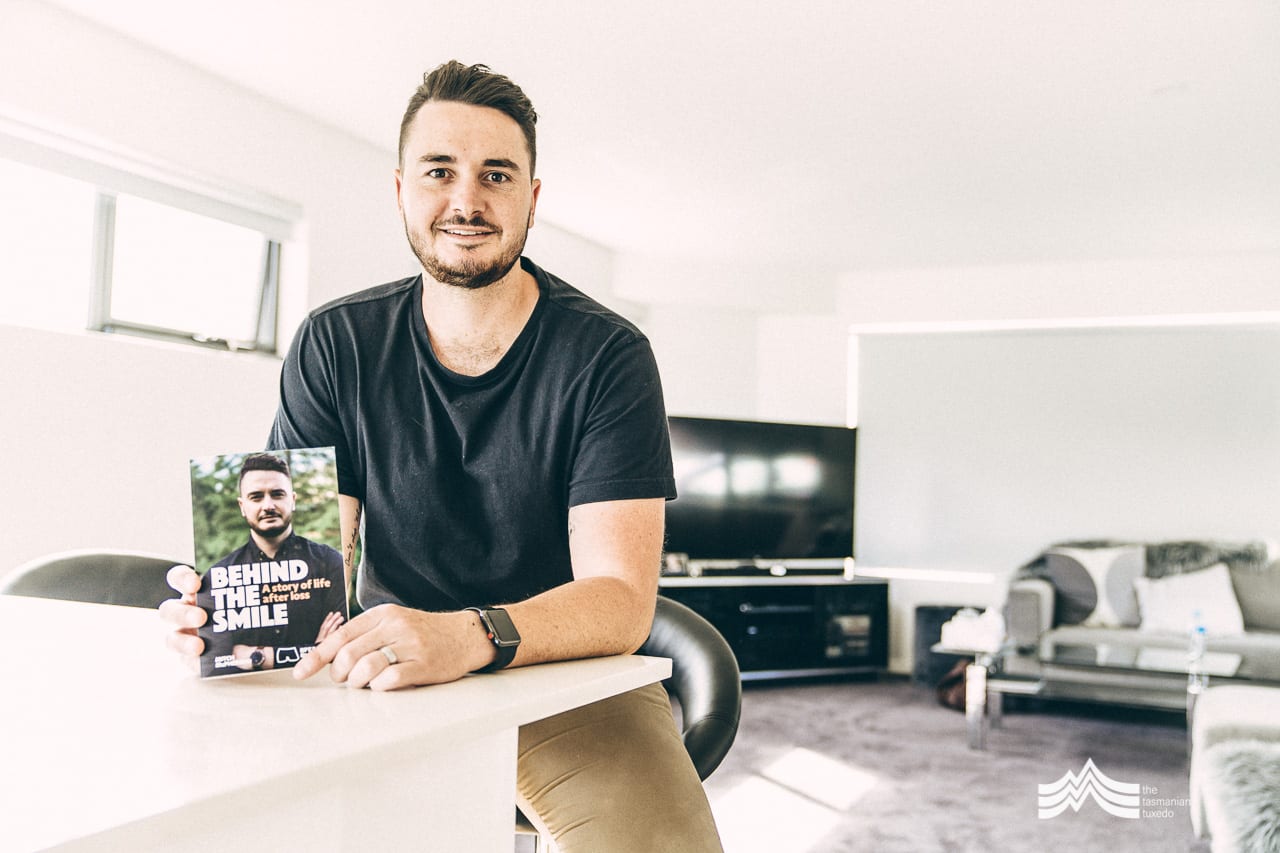 Mitch tells his own story in his new book Behind the Smile: A story of life after loss. Order your own copy from www.mitchmcpherson.com.au

If you or someone you know is in crisis and needs immediate help, ring 000. Other resources are listed at www.staychatty.com.au/get-help/