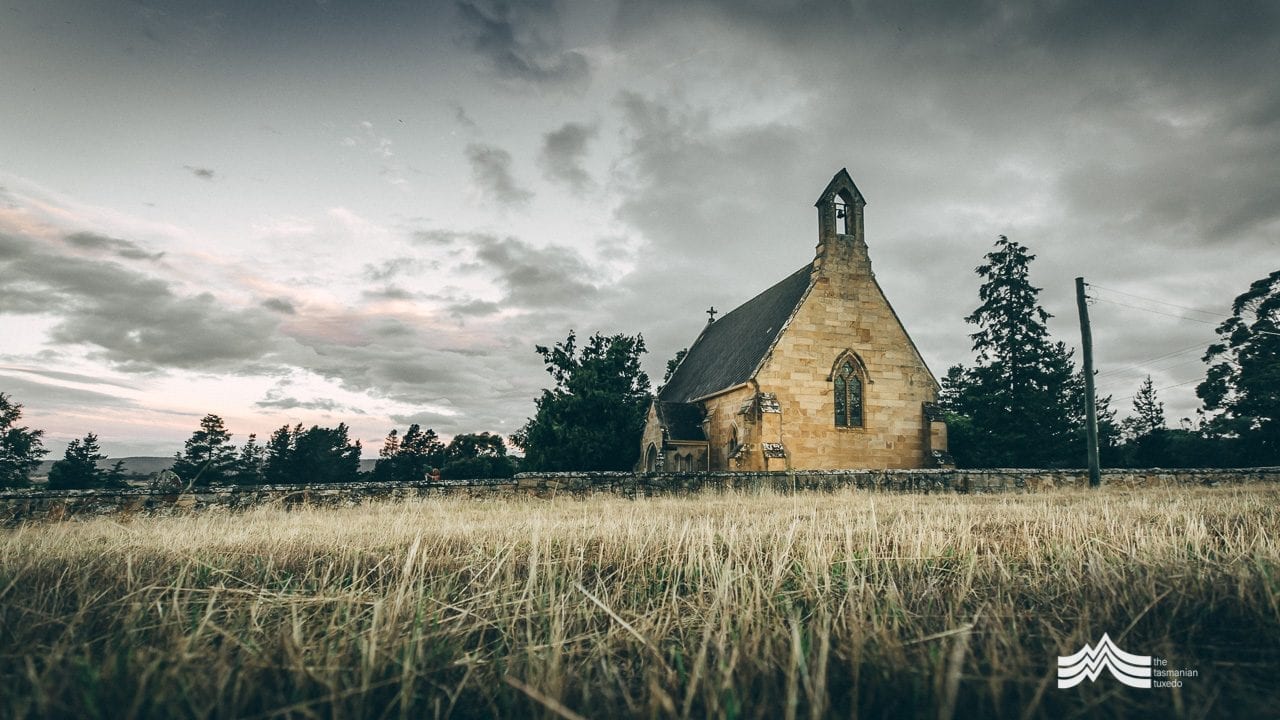 Despite sitting close to the highway, the Church of St. John the Baptist in Buckland is overlooked by many of today’s travellers. In a hurry to reach Hobart to the south, or the famed eastern coastline further to the north, many miss the opportunity to uncover the historic secrets lurking just off the roadside.

Early morning within the church grounds are peaceful, the calm only broken by the quick swoosh of a passing car or the call of a circling crow in the fields beyond. Generations of local family gravestones huddle together seemingly to stave off the weeds that threaten to swallow them. Many are carved from the same sandstone as the building itself, solid slabs that echo the shape of the church windows. 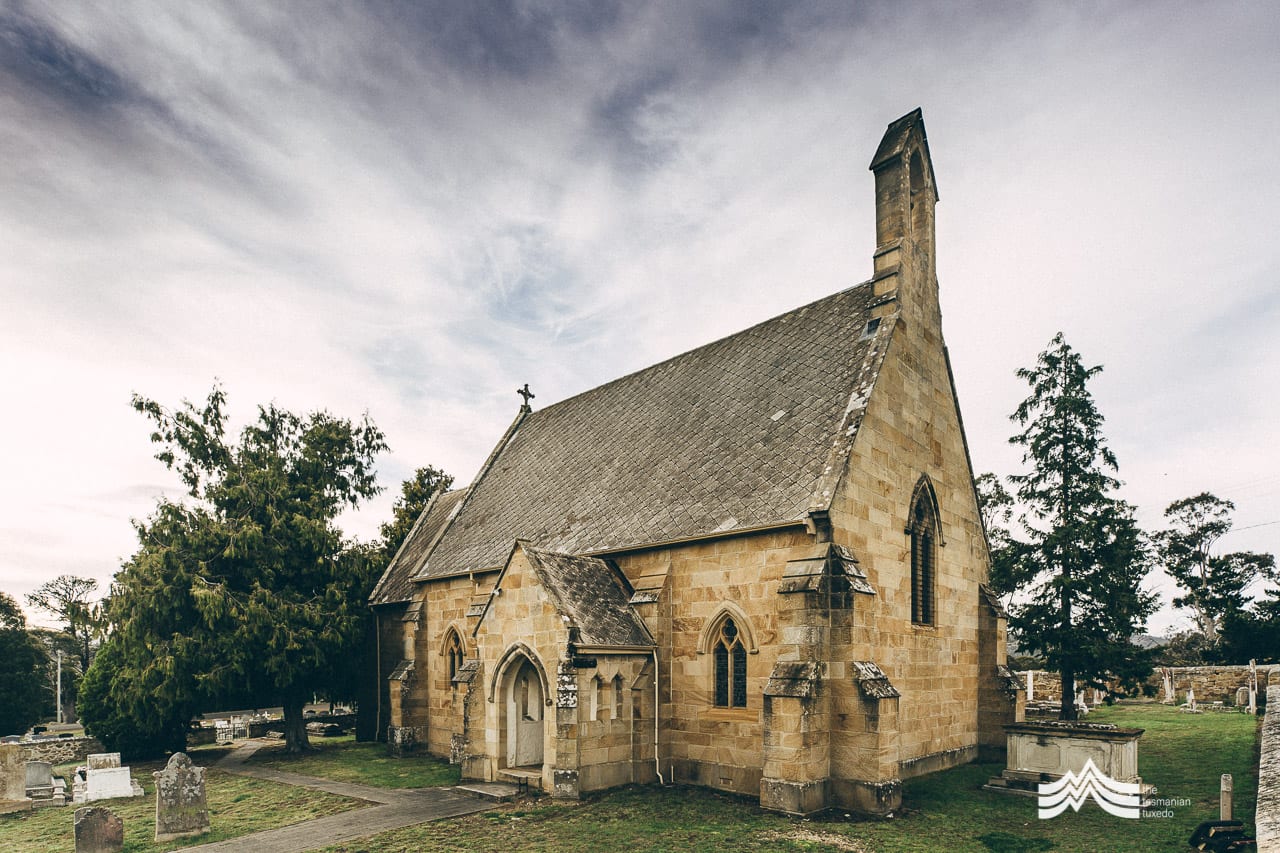 Although quiet today, Buckland once sat at the centre of convict activity. It was an important overnight stopover for coaches and their horses transporting convicts to numerous probation stations dotted along the east coast. Until 1844 there was even a station in Buckland itself. Reflecting the name of the area at the time, the Prosser Plains Probation Station oversaw convicts working in gangs to construct the road between Prosser Plains and Orford.

A letter from one William H Breton to the Anglican Church hierarchy in 1836 points to the concerns of the day in and around the Prosser Plains settlement. It provides unique insight into the drive behind the church’s establishment:

‘No clergy at Prosser Plains. Divine service has not been performed by a clergyman for seven years. His Excellency the Lt-Governor is not aware…that convict servants should not be permitted to continue longer without the Word of God preached to them. Population of Prosser Plains exceeds 200.’

The reaction to the note was swift. Within the month a site had been inspected and secured for a new place of worship to support the growing Prosser Plains congregation. Whilst it remains unclear if the church was the product of convict or free labour, what is clear is that it is a replica of a parish church in Sussex, Cookham Dean. Whilst works proceeded, the church’s first Chaplain, Rev F.H Cox conducted his services at the local Police Magistrates office, getting to know his parishioners and drawing an early following for Sunday School. 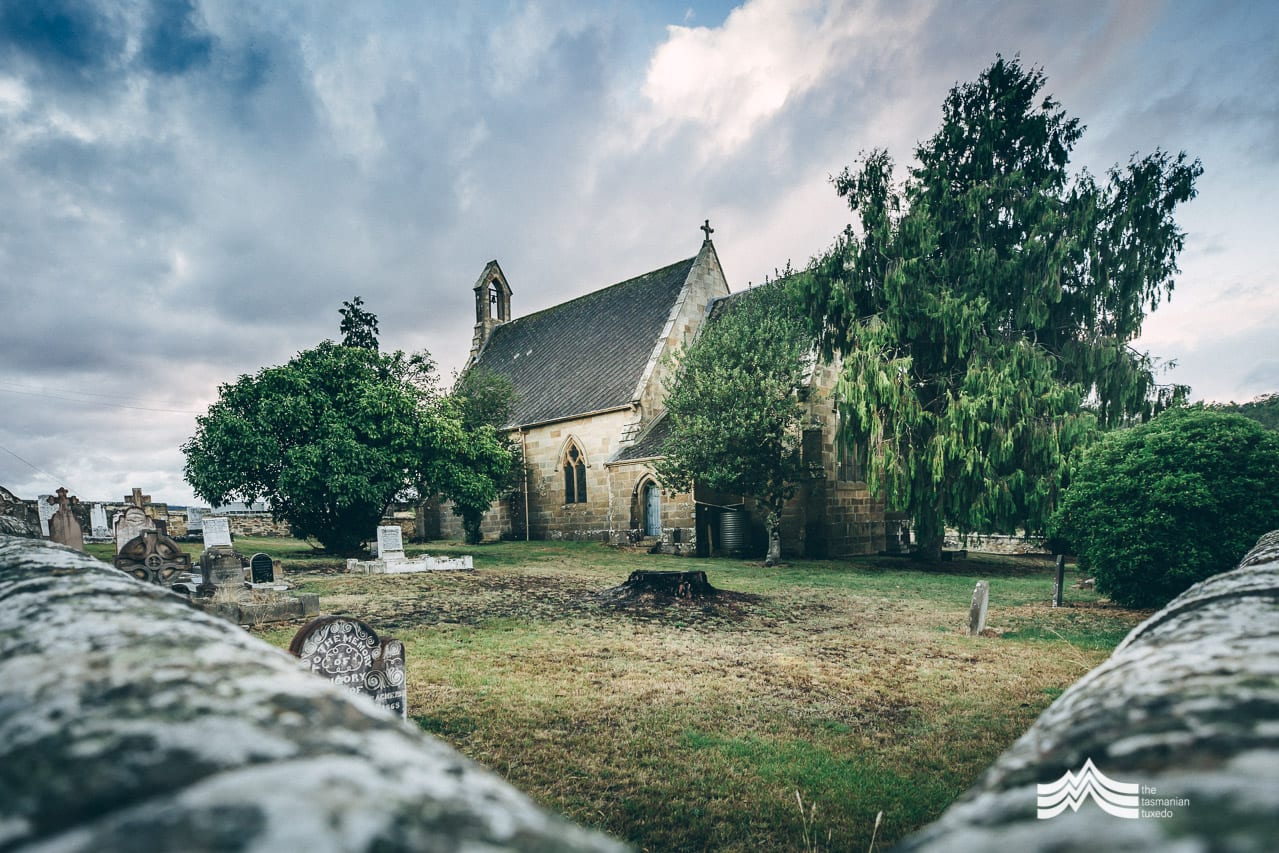 In the same year Governor Franklin renamed Prosser Plains as Buckland, after William Buckland, Dean of Westminster (1845-56) and well known geologist. The name is fitting for an area renowned for its high quality sandstone and sporting a number of local quarries.

For well over a century, controversy has surrounded the church’s crowning glory – the magnificent stained glass east window. The glorious depiction of the story of John the Baptist, rich in both colour and detail, has been enjoyed by parishioners for close to two centuries. Specifics of its age and origin remain unclear and theories have kept locals bemused for generations. Indeed, it seems no other stained glass window in Australia has caused as much discussion as this one. A church publication, available today to visitors, reveals the most likely scenario and uncovers just how this tiny hamlet maintains an intriguing link to William the Conqueror. 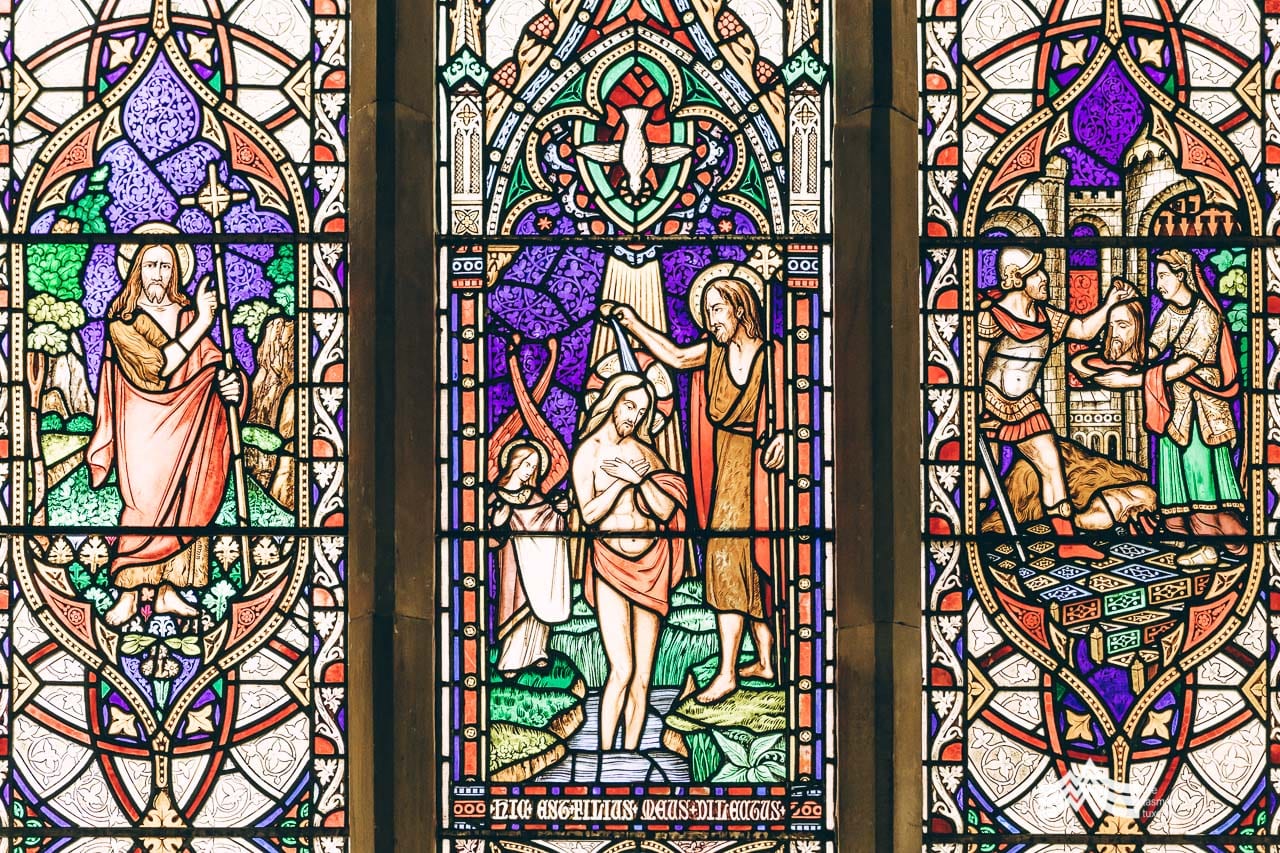 Research into the integrity of the window has thoroughly examined its style, craftsmanship, colour, treatment and motifs and, rather amazingly, has dated its origin to the latter half of the 14th century – somewhere between 1350 and 1400. Evidence is also consistent with it being the product of fine English workmanship.

Just how this stunning piece of English history ended up in a country hamlet across the other side of the world is where the real fascination lies. We know that William the Conqueror built a single church in England, Battle Abbey, the site of the Battle of Hastings in Sussex. The story goes that around the time of the Cromwellian Rebellion the window was removed and buried for safety. Perhaps not coincidentally, Sussex also happens to be the native county of Chaplain Cox, who arrived in 1846 to oversee the laying of the foundation stone and the subsequent build.
Following the Cromwellian Rebellion, Battle Abbey was never restored. It is concluded that some 200 years later, Rev Cox had the original glass shipped from England to Tasmania. Despite numerous links to English high society and those capable of arranging such an export, Rev Cox never confirmed the story – church publications describe him as having a ‘reticent nature’ which led him to maintain the secrecy around both this and other gifts to the church.

What is known is that the window has been in its current place since between 1848 and 1850. This dismisses any claims it’s a modern reproduction as the practice of antique reproduction did not become common until a much later date. It does appear to have been restored at some point as a number of panes of glass appear to differ in colour from the original and their workmanship is of an inferior standard. 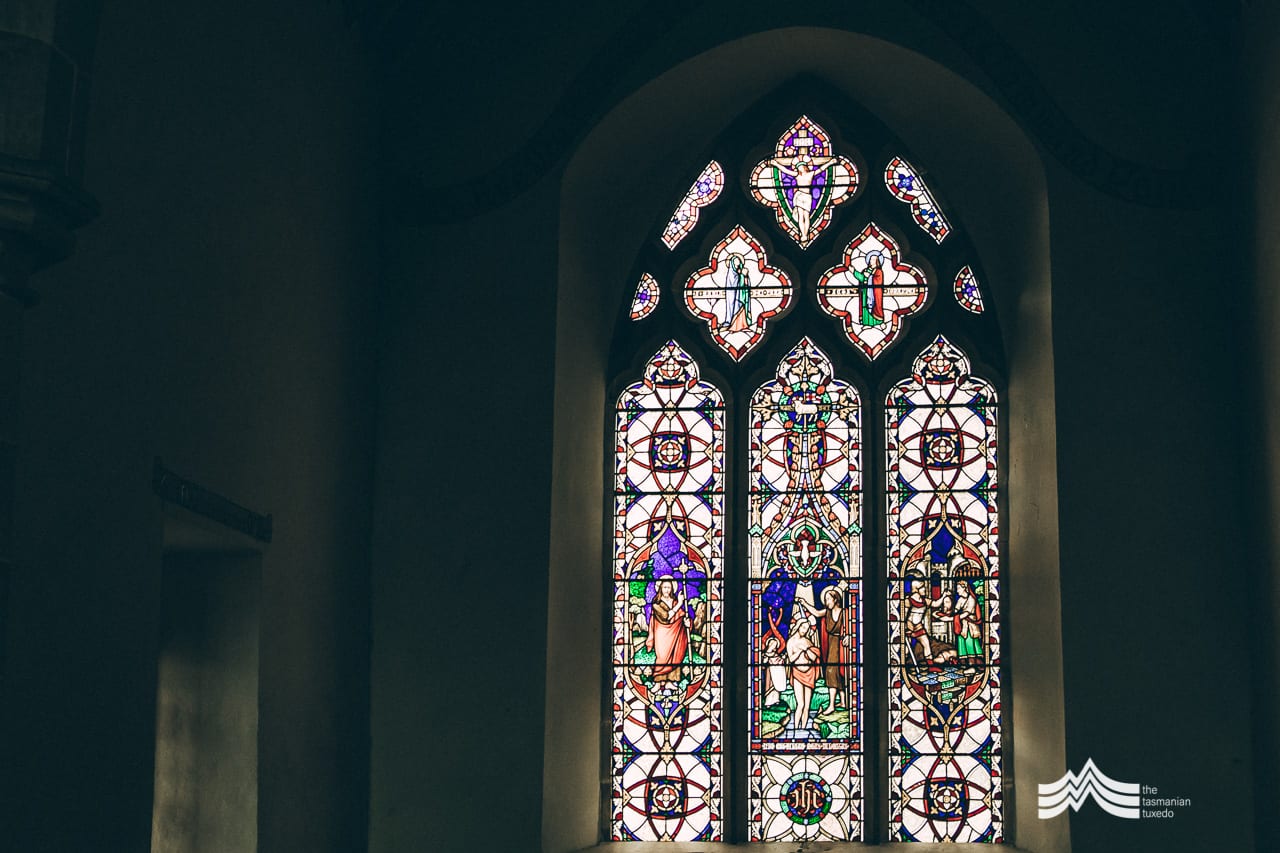 The other common explanation for its origin arises from an 1850 report in the Hobart Town Courier. This claimed the window was the work of Irish born artist Michael O’Connor. O’Connor was indeed a reputable glass artist based in London at the time, however careful examination suggests that O’Connor may have been responsible for some restoration work on the east window, rather than its initial creation. This is further supported by the craftsmanship of a smaller window within the church, also credited to O’Connor. Its workmanship matches that seen in the repairs on the east window, suggesting both have been touched by the same hands. This would easily explain how O’Connor’s name became readily linked to the famed east window and the subject of the article.

The Church of St. John the Baptist remains in excellent condition. Visitors are welcome and just need to turn the rounded forged door handle to quietly slip inside, soak in the ambience and draw their own conclusions as to the origin of Tasmania’s most talked about stained glass window. 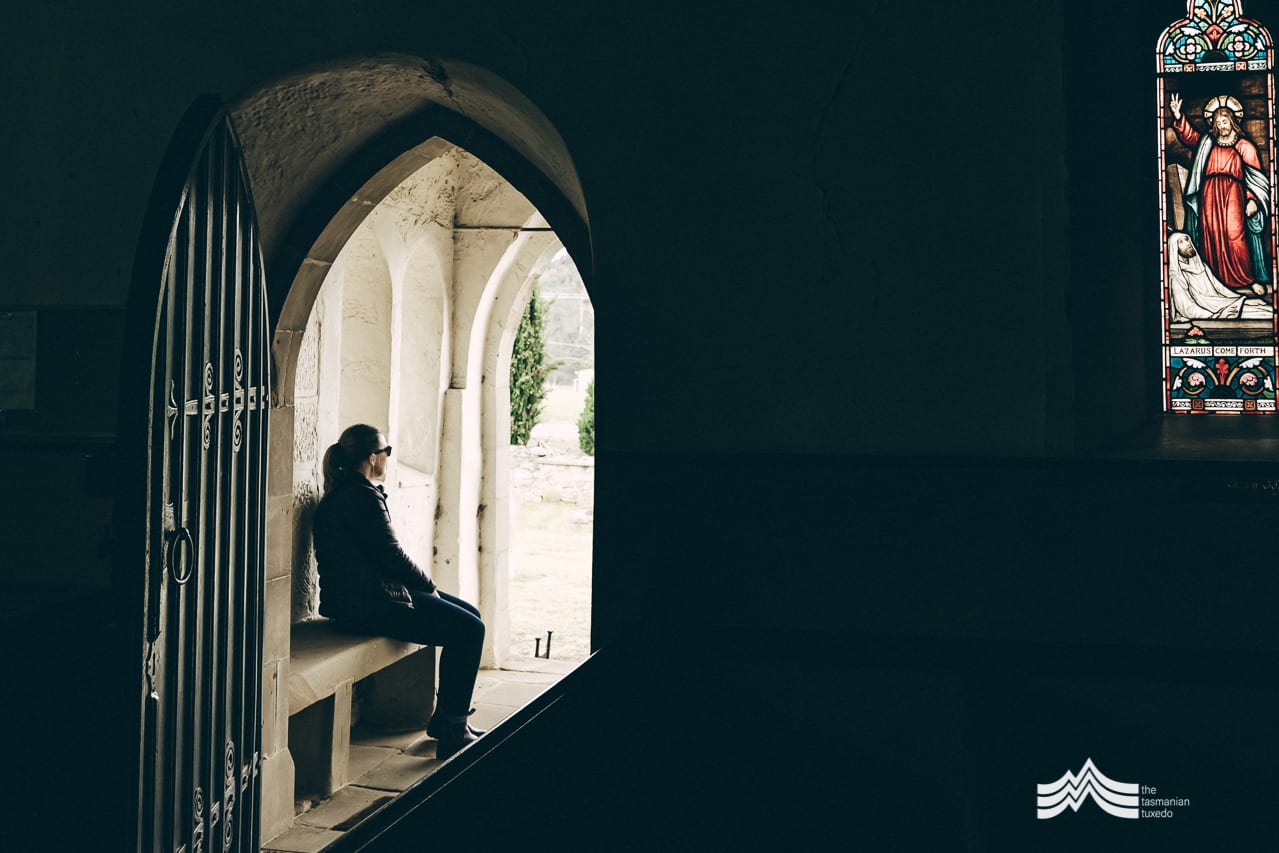