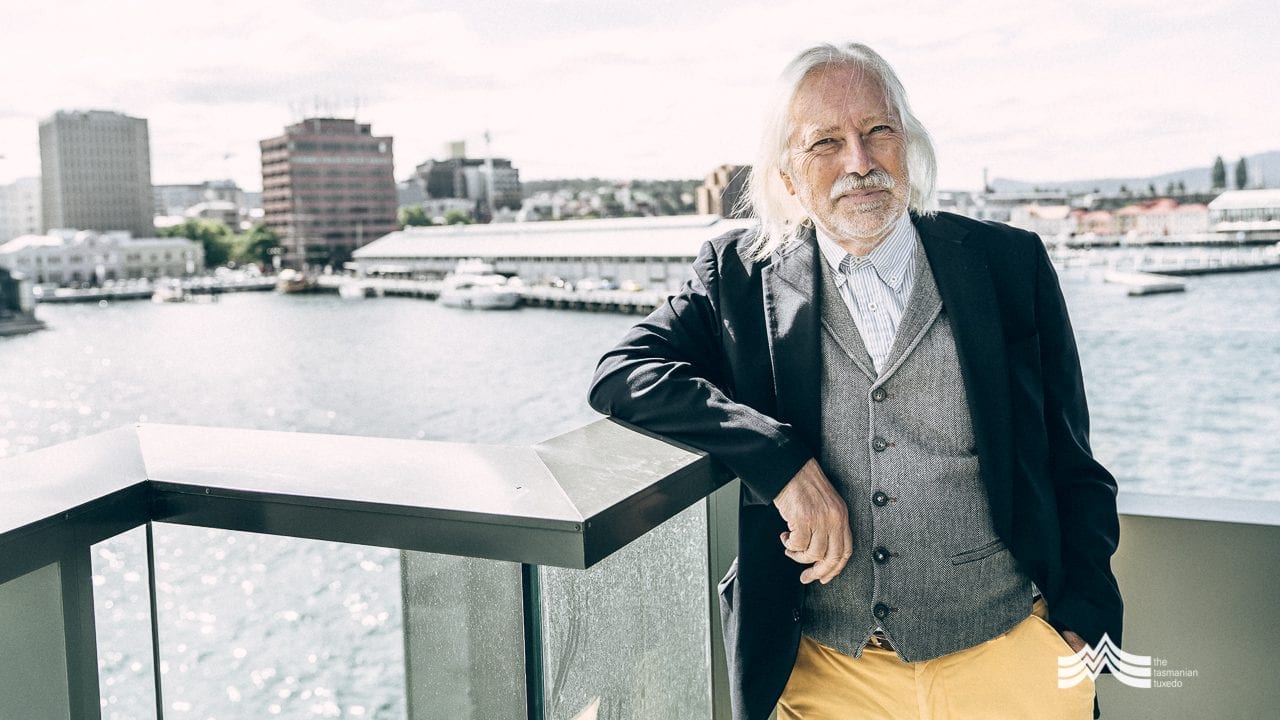 Country villages in the Netherlands and acclaimed experts in algal blooms don’t usually go hand in hand, however Professor Gustaaf Hallegraeff is an exception to many rules.

“I had an uncle who was a vet,” starts Gustaaf. “When I was a small boy he was always taking me on exciting adventures…I remember helping to deliver calves in the middle of the night. You could say he opened my mind to nature.”

At just seven or eight years of age, the same uncle placed a life changing gift in the young Gustaaf’s hands. “He gave me a small toy microscope. As soon as I started to play with it I became smitten with the many beautiful things I discovered. I began exploring refractive patterns on the wings of flies and mosquitoes, but the real excitement came when I put a single drop of rain tank water under the lens.” 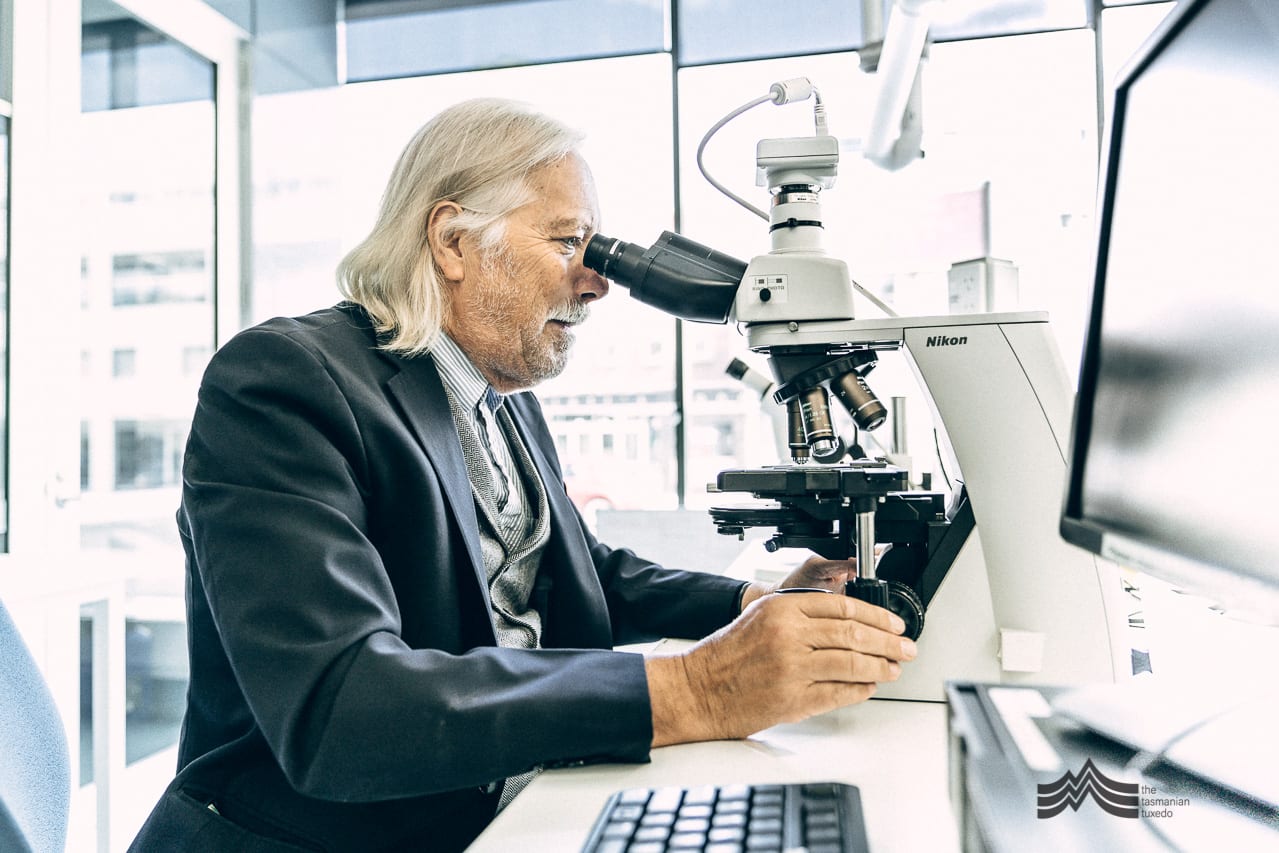 With an artistic bent, he was immediately spellbound by the tiny wonderland no one else could see. “I have a lot of artist in me and so I quickly started to capture it by drawing. I had no idea what all those tiny things were and I quickly learnt that my parents and teachers didn’t either. They had no answers to my questions…were these things plants or animals? Were they benign or dangerous? I remember feeling intrigued at having discovered something new.”

Scouring through the local library, Gustaaf unearthed two books that added even more fuel to his curiosity. “There were only two books on plankton. One told me that plankton was the food source of the blue whale. The fact these tiny microorganisms were the food of the largest living animal on our planet was enough to convince me this was something really important.” It could be said that Gustaaf’s life was set on a trajectory of scientific discovery from that moment on.

“Being a bright child my parents were keen for me to study medicine or law. But there was never any doubt about what I would do. I was set on plankton very early on.”

Arriving at university in Amsterdam he struggled to find a mentor to satisfy his thirst for knowledge. “Back then I couldn’t just google ‘plankton’ and find out who the experts were, it was hard to know where to study. I ended up working with a local professor who specialised in whales. He got me onto krill…they feed on plankton…so I cut open krill stomachs, it was the closest to plankton I could get for the time being.”

A subsequent PhD on the phytoplankton of freshwater lakes provided a firm foundation for the adventure that was to follow. “I arrived in Australia in 1978 chasing a postdoctoral position at the CSIRO in Sydney. Don’t get me wrong, I love Holland…it’s cosy and I love the people, but it’s overcast nine months of the year. When I landed in Sydney I rejoiced in the warmth and…I finally got to work on the blue ocean.” 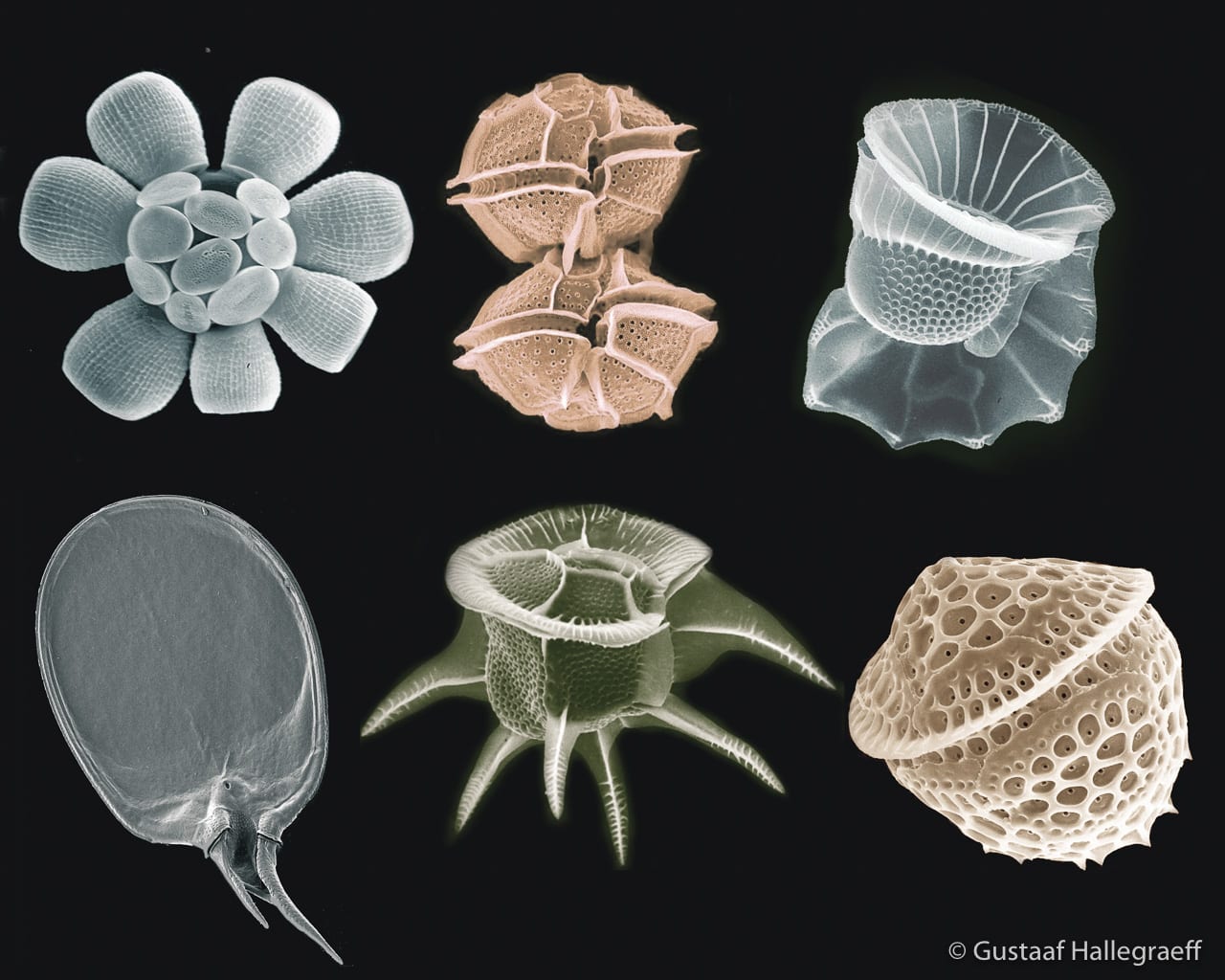 Millions of single celled microorganisms inhabit the world’s oceans. Technically speaking, these primitive creatures are neither plants nor animals, rather they are classified as Protists. Some of them behave like plants and capture sunlight to photosynthesize, and many others feed like animals. We all owe gratitude to these remarkable life forms. Not only do they contribute every breath of oxygen in the air we breathe but their work in prehistoric seas is behind the oil reserves we use to power the vehicles of today.

It was whilst working at the CSIRO that Gustaaf discovered his sea legs. “I’m one of those lucky few who can work on a microscope on a ship,” he grins. “I love being at sea and being able to take samples and examine them straight away. I don’t get seasick like most people.” He also explains how his years at the CSIRO provided unrivalled experience in the field, “I would volunteer to go to sea whenever I could. I love travelling, love exploring…and have been all over this country researching…from far flung bays in the Gulf of Carpentaria and the Great Barrier Reef to busy working ports such as Port Hedland and Melbourne.”

The mid-eighties saw the CSIRO announce its headquarters would relocate to Hobart. “I had to follow, it was my work,” recalls Gustaaf. “I was young and single so it was no problem really, but I had no idea what to expect. It probably took me two years to get everything settled and to set up a new lab.”

Gustaaf’s experience was called on before long, “We found a huge bloom of toxic dinoflagellates in the Derwent and Huon estuaries affecting the local shellfish industry. No one had any knowledge of what caused it, nor was there any expertise in Australia to test the samples for toxins and verify the extent of the problem.” He pauses as he recalls the next steps, “I had to collect the shellfish in an esky and take it on a plane myself to Japan to have it tested. The results came back very toxic and the whole shellfish industry was temporarily closed down. It quickly became my area of expertise and I went on to work on these problems across Australia and indeed the world.” 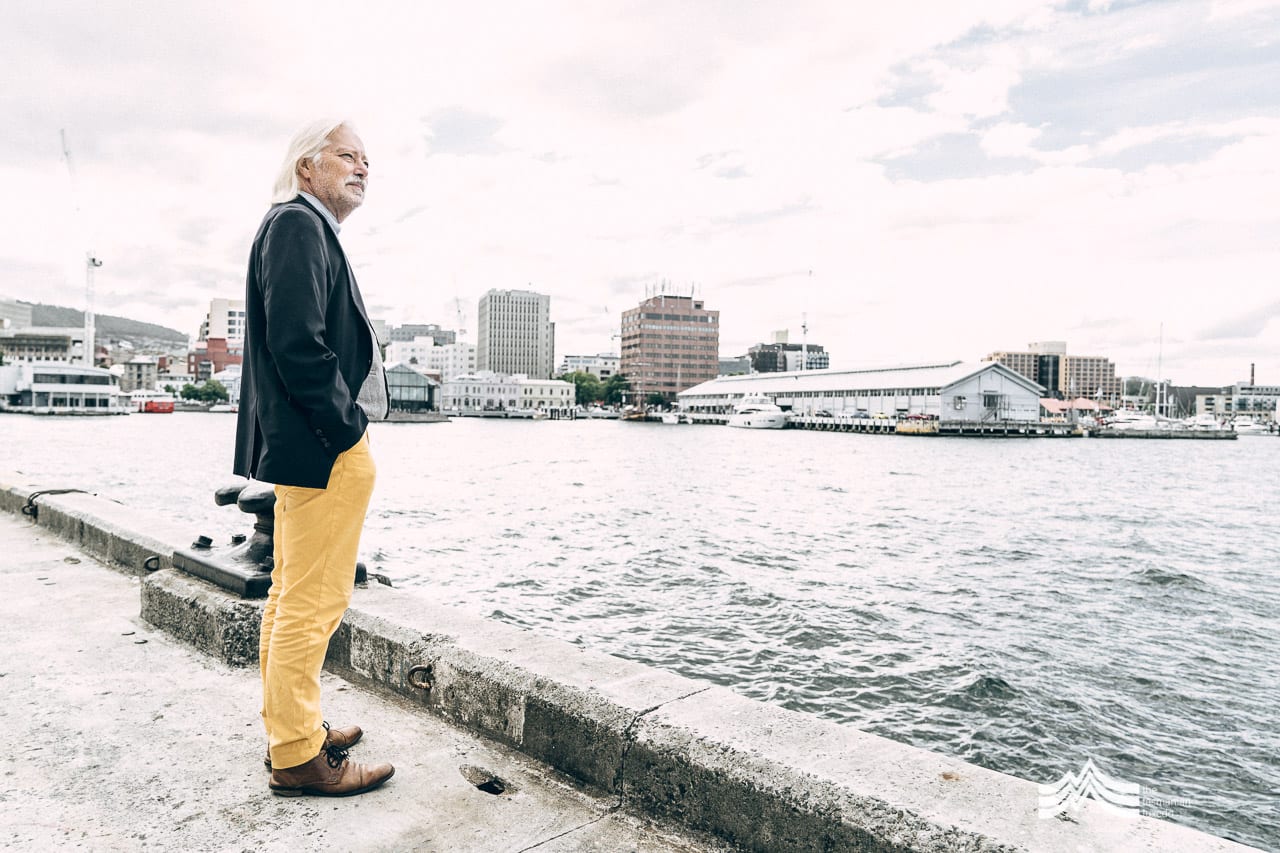 The impact of toxic algal blooms on the Tasmanian shellfish industry is now widely known. “From the Huon area to the east coast,” says Gustaaf. “Since 2012 we’ve had problems from Flinders Island right down to the Tasman Peninsula…there have been multiple outbreaks over the last 25 years and these can have dire consequences for public health, tourism and the seafood industry. I’ve done extensive work on toxins in shellfish and lobsters now, and helped establish various monitoring and management protocols to minimise risks.”

“One key microorganism we found in these investigations had never been described from Australia before. That left us wondering if it was local or not,” he continues. “Taking sediment cores allowed us to examine microscopic fossils of plankton and determine exactly what was around some 200 years ago. Now we even have the ability to extract ancient DNA. From just one slice of a sediment core we recently found the DNA from approximately 3500 organisms, and about 60% of those are undescribed.” 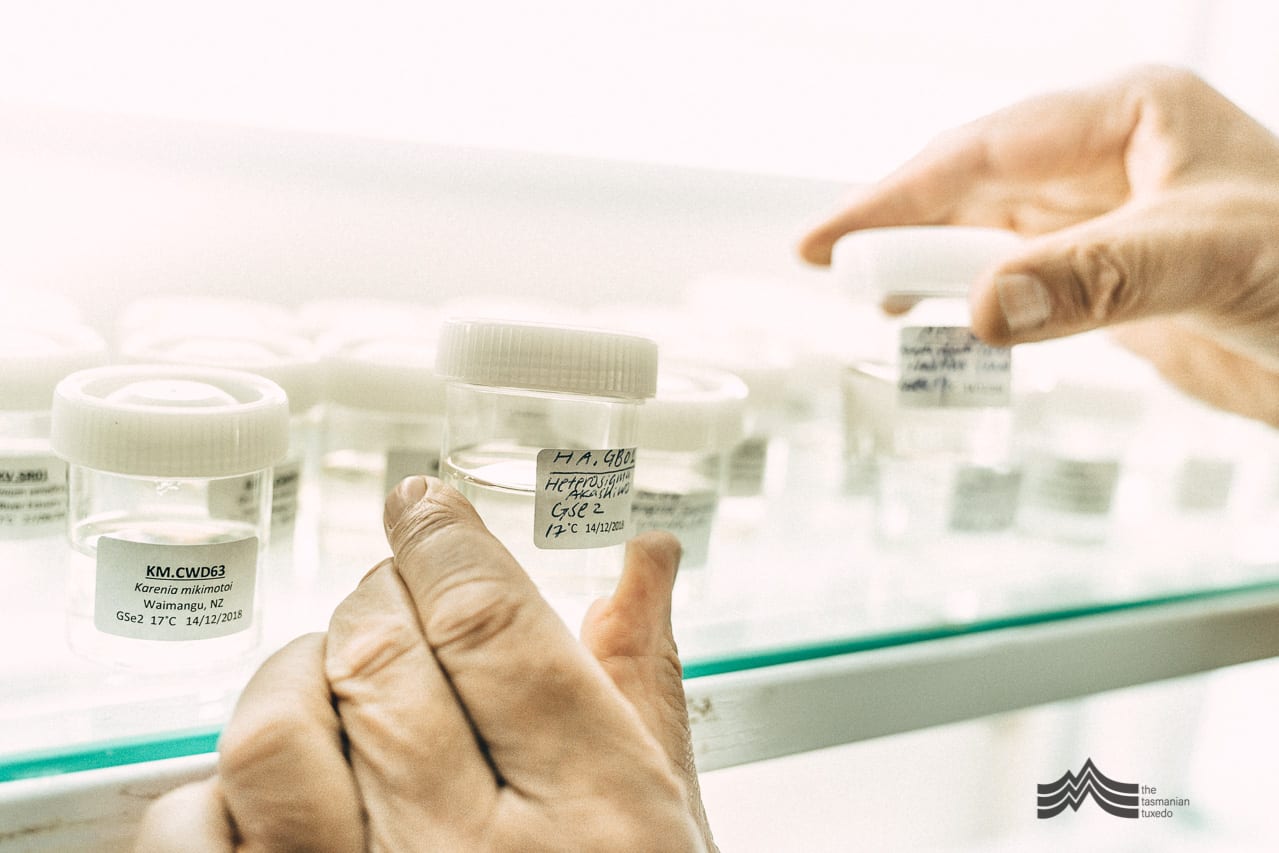 Concluding that one species of plankton causing the issue was a relatively recent addition to the state, Gustaaf explains, “We were able to demonstrate that this particular organism had not been in Tasmania prior to the early 70s. We knew it did exist in Japanese waters and ultimately came to link it to ballast water from ships visiting our woodchip mills. This kick-started my work in ballast research with the shipping industry.”

In a nutshell, ballast water is utilised to provide stability to a ship. Water is moved in and out of the ballast tank to counteract the weight of the vessel. Ships transporting goods around the world will take on water in certain locations, and release it in others, depending on the weight of the cargo they are carrying. Unfortunately this often means biological material is unwittingly transported around the globe, causing any number of problems.

Gustaaf’s first scientific papers on ballast water were published in 1987. “In addition to my work on toxic dinoflagellates in Tasmania at that time, my colleagues focused on Japanese seaweed and starfish. Australia quickly became a world leader in this field of introduced marine pests.”

Working alongside BHP engineers, Gustaaf worked on shipping routes between Australia and Japan. “I really enjoyed that collaboration with industry. BHP were genuinely interested in wanting to solve the problem and offered me a lot of help. I worked out that one potential solution was to heat the ballast water. It turned out that most microorganisms could be killed by heating the water to just 45 degrees for several days. If the ship could do this before releasing its ballast water, then we wouldn’t see the problems with introduced pests that were starting to become a real issue across the country.”

Australian scientists, Gustaaf included, led the way by helping to draft what now has become a ballast water management framework under the UN’s International Maritime Organisation. “It spells out that water is to be exchanged in set regions of the oceans and also includes standards for filtration and heating for all new ships to be built. We worked on this for years and that Convention was finally ratified in 2017. So yes we’ve made progress, but to have the 35 nations who represent the bulk of the world’s shipping sign it has certainly taken time. It’s a prime example of how scientists can only do so much…we need the support of policy, legislation and political power to realise action.”

Hobart in the 1980s was a sleepy backwater, but with the arrival first of the Australian Antarctic Division (transferred from Melbourne), then the CSIRO Marine Laboratories (from Sydney), and more recently in 2010 the establishment of the UTAS Institute for Marine and Antarctic Studies (where Gustaaf works now), Tasmania has become a world leader in Marine and Antarctic Science. Add the MONA effect, and the fact that he met his Canadian artist and educator partner in Hobart – with whom he shares a daughter studying to become a human rights lawyer – Gustaaf appears well settled in now buzzing Tasmania.

Speaking of his life’s work, Gustaaf cites his career highlights. “It’s nice to be recognised formally with awards like the Eureka Prize for environmental research and the UTAS research medal, but what I’m most proud of is how my work on microorganisms has grown to become of interest to so many people. As a child I had a sense this field was important and now I’ve demonstrated significant impacts on human health, climate, seafood industries, shipping and associated global economies, it’s nice to know I was right. It is important.” 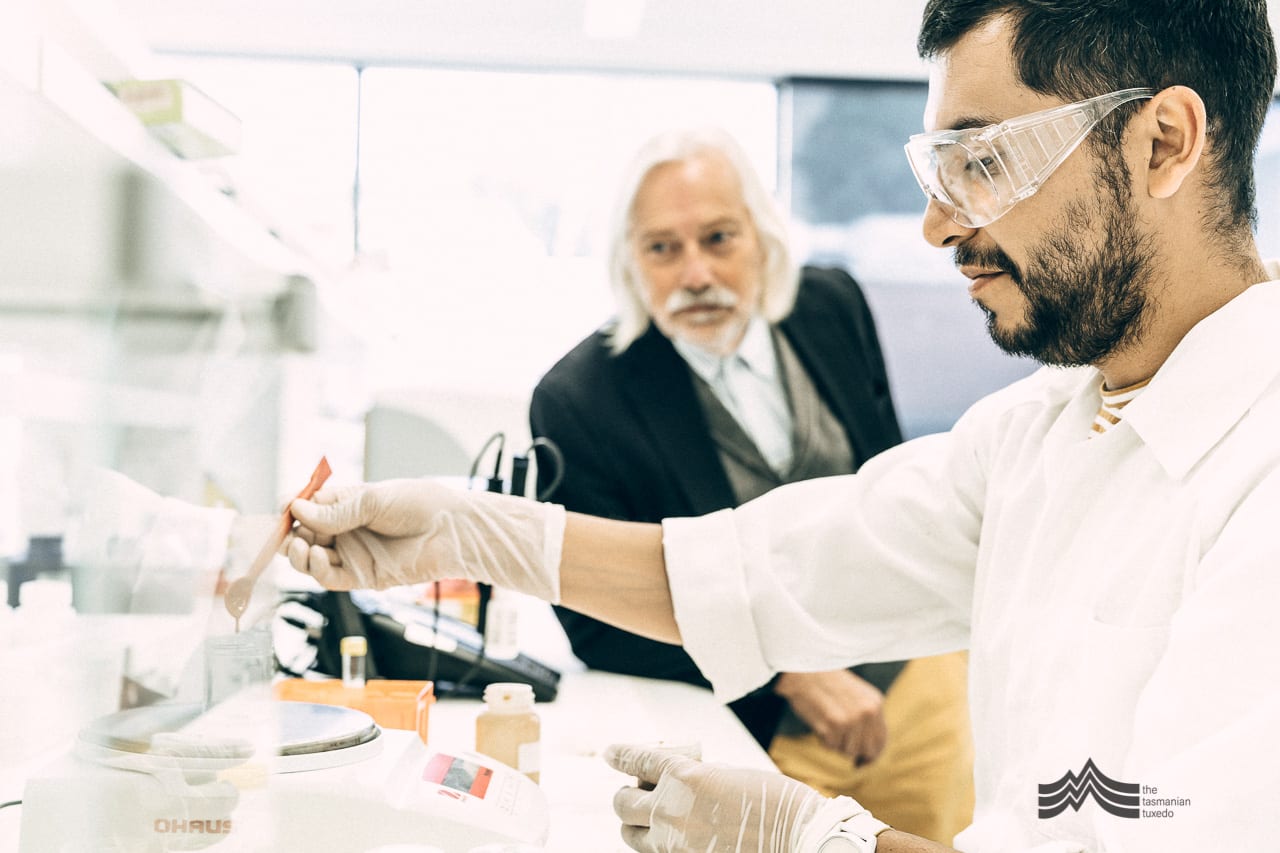 With over 40 PhD students to his credit, Gustaaf’s leadership has launched a supply of outstanding scientists across Australia and around the world. “I’m a good communicator and I love to travel, so I’m good in a crisis,” he grins. Having been called on from across the globe to advise on toxic algal blooms, most recently in relation to a US$800M salmon aquaculture mortality in Chile, he’s no stranger to advising governments on how to improve their practices.

“It’s so satisfying to be able to help others and to then bring that knowledge back to Australia. I know there will be more plankton issues in our waters and when they surface I am here and ready to help.” 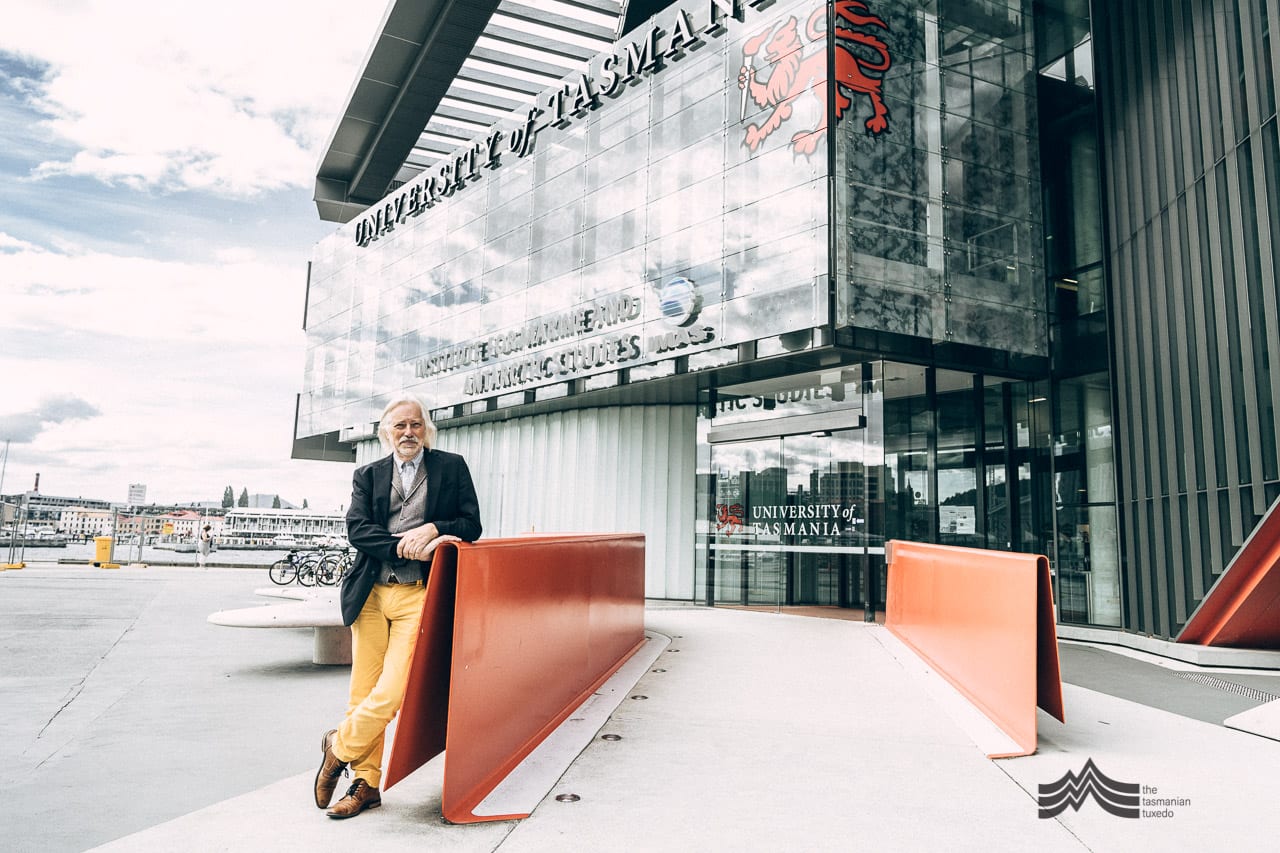