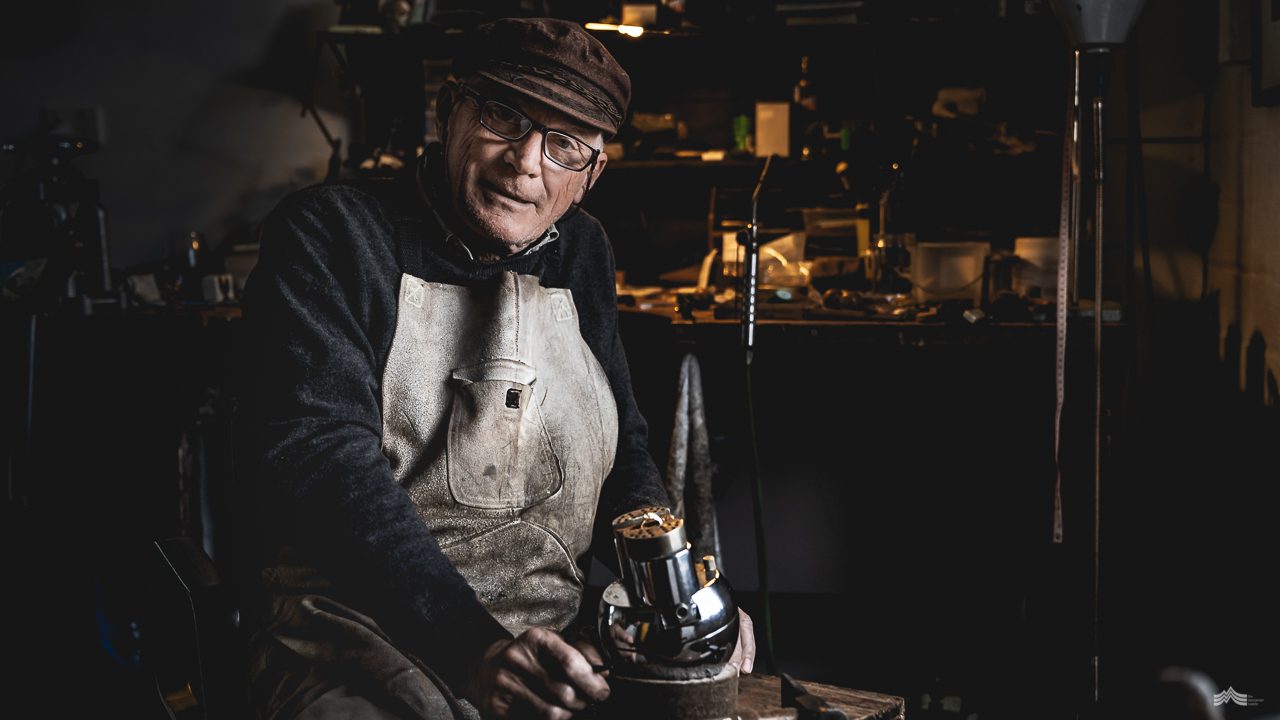 It is said that every artist dreams of a quiet studio by the sea. A place where one can tune out the world and lose themselves to the rhythm of the ocean. A place where mood is shaped by the elements. A place where inspiration is unashamedly governed by the wilds of nature.

Assuming this is true, Sandro Donati has it made.

Home to Sandro’s art and craft is the humble White Shack on Flinders Island. A place that entwines gently around your soul the moment you step inside. Whilst the wilds rage outdoors, White Shack gallery beckons with a simple promise of welcome. Sandro’s tiny studio is as equally warmed by the slow burn of the wood stove huddled in the corner as it is by his magnetic personality. This is a man who radiates friendship and honesty.

Sandro’s inquisitive nature and appreciation of the landscape has come to define his arts practice. “It’s a privilege to live somewhere like Flinders Island,” he explains. “It’s funny how the sheer beauty can sometimes become routine…routine becomes the ordinary…but then you take a walk on the beach and find something extraordinary and realise once again how precious it is here. We live an ordinary life that is truly precious. It’s not always easy here, it’s a place of extremes…but there’s something fulfilling about that.” 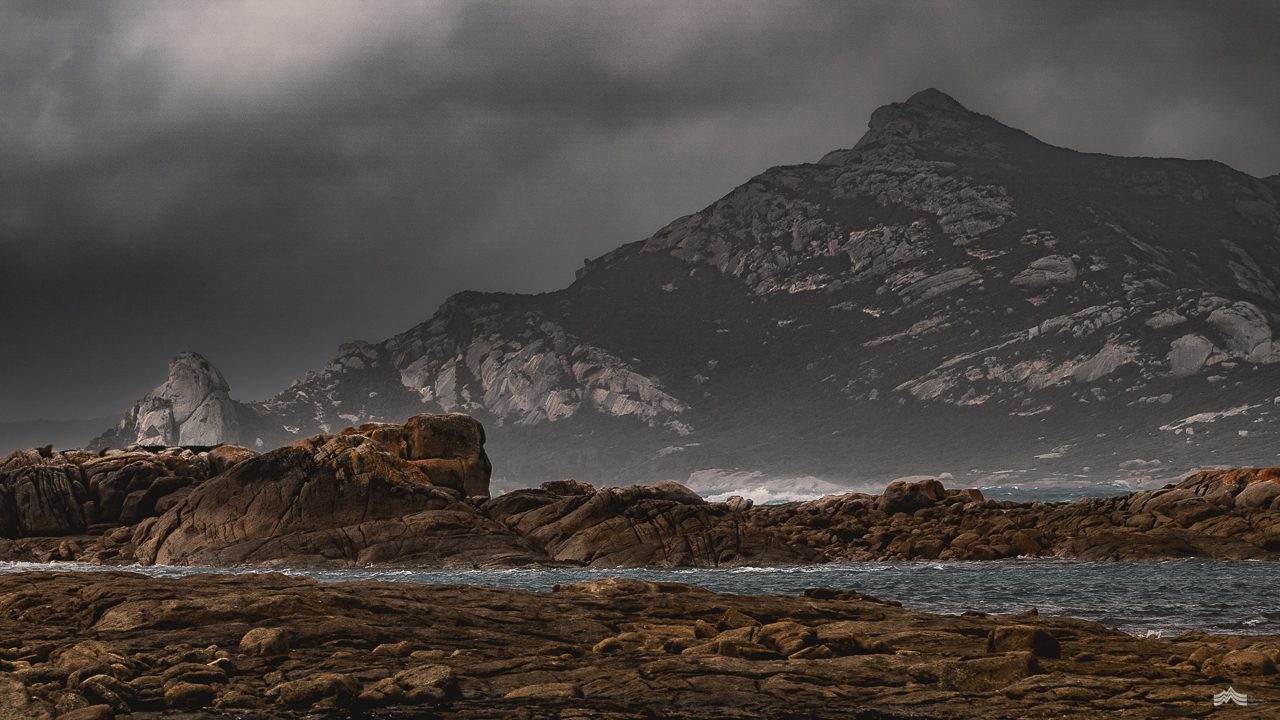 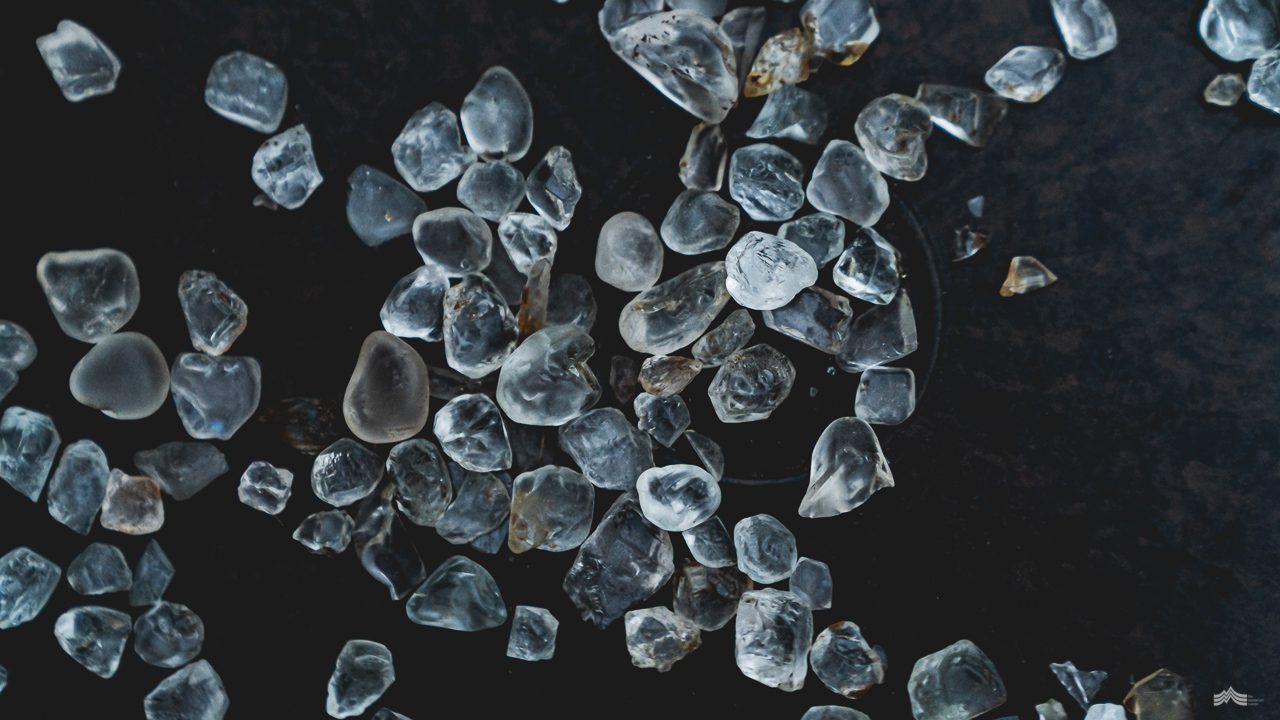 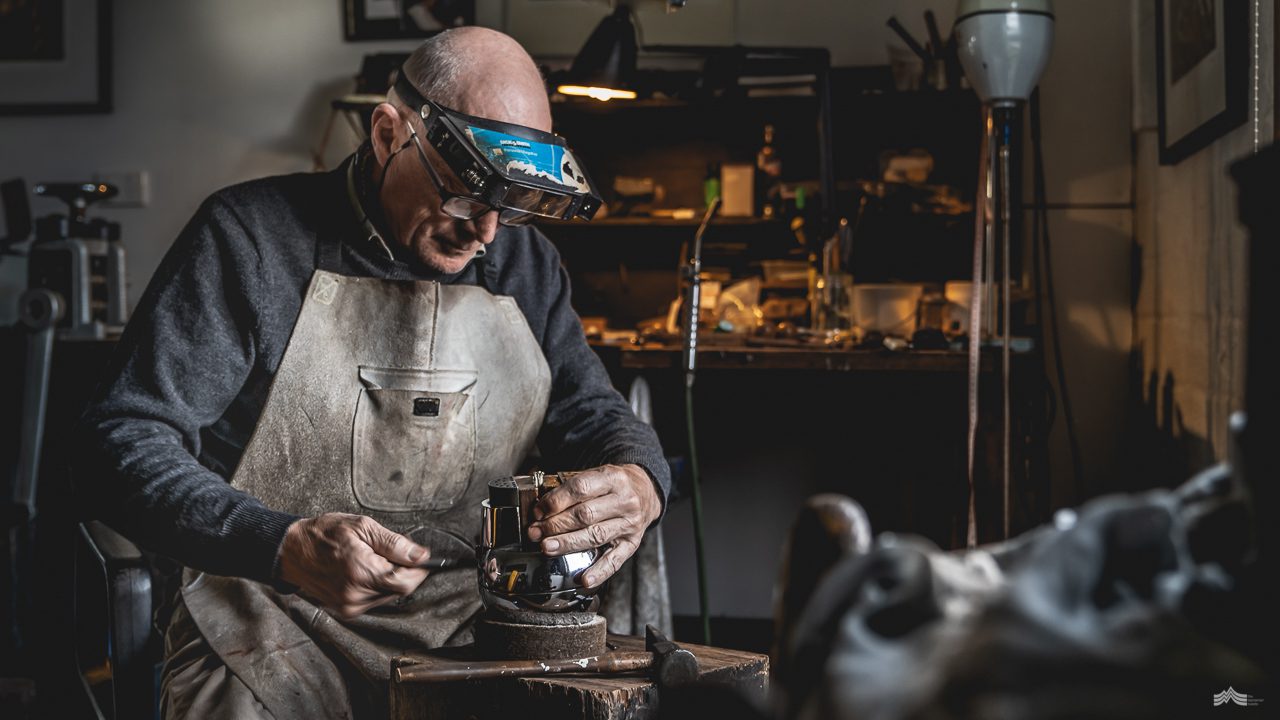 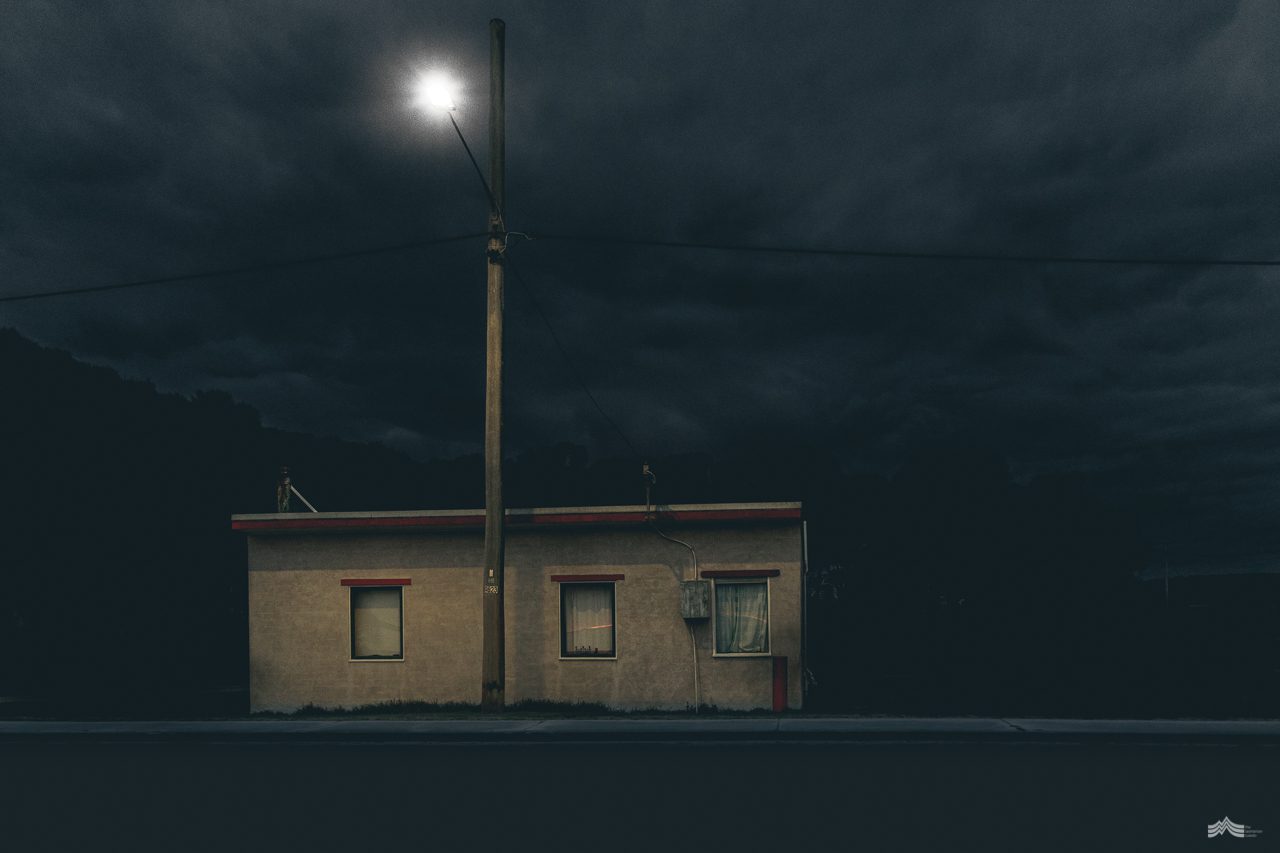 A gold and silversmith by trade, Sandro handcrafts beautiful jewellery inspired by the natural world. With a clear passion for the coast, his intriguing works are a personal interpretation of the raw surrounds of Bass Strait living. “A friend once described my work as a conversation with the elements, which I’m very happy to own,” Sandro says.

Sandro’s respect for the wild translates into his signature style. His hand-forged works are one off mergers arising from fundamental metallurgy techniques. Hunched over his workbench, silhouetted in the failing evening light, Sandro is absorbed with a simple hammer and anvil. He works diligently with fire to fuse metals and to craft settings for locally found treasures – gemstones, shells and bones.

“It’s a funny place we find ourselves. Using fire and brute force to craft and make things.”

The Killiecrankie diamond, the famed Flinders gemstone, rightly attracts the attention of clients keen for their own piece of Flinders magic. “The Killiecrankie diamond is harder and denser than normal topaz,” explains Sandro motioning towards a tray of natural delights. “It refracts light within the stone, much like the play of light you see in real diamonds.”

Sandro’s sublime collection of Killiecrankie diamonds hail from the late Thelma Shaik (nee Jackson). “Thelma loved the Killiecrankie bay area,” recalls Sandro. “She operated a gem shop here on the island for many years and would dive for diamonds in the shallows of the bay. Thelma was a very successful gem merchant and took great pleasure in stones right up to her death at age 94. We struck up a lovely friendship and I was honoured when she gave me access to her collection. It’s something very special.” 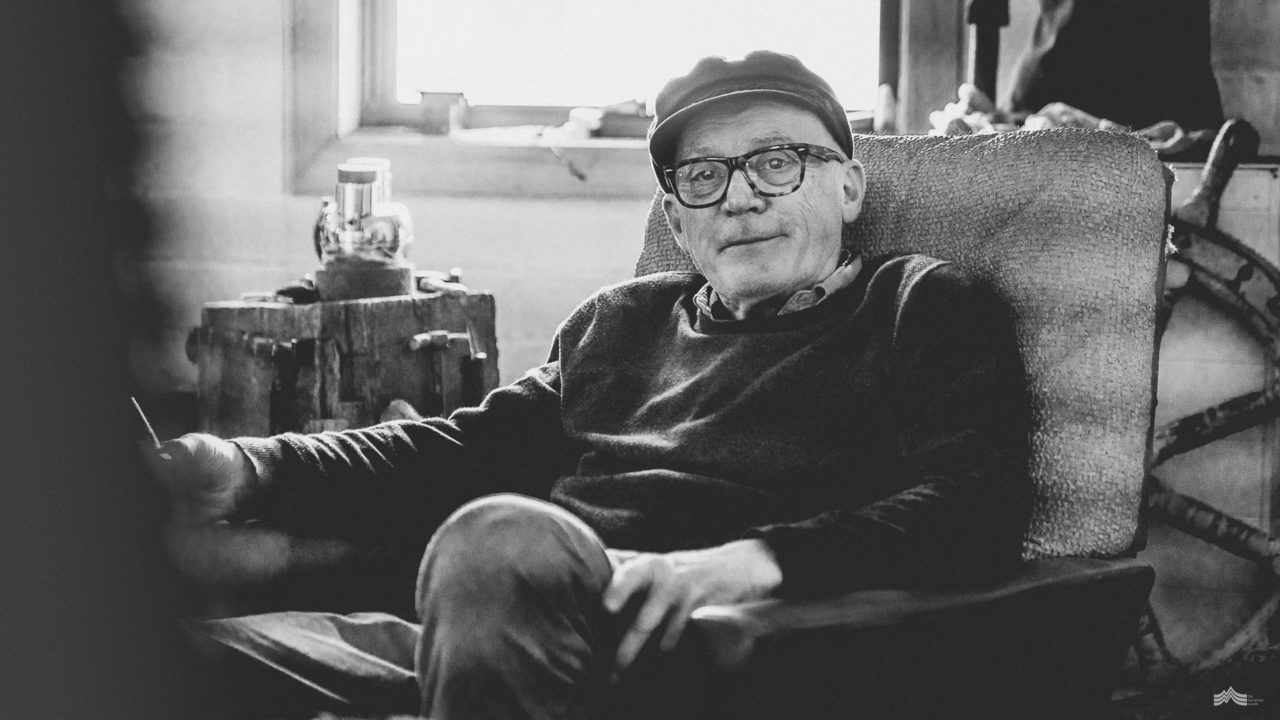 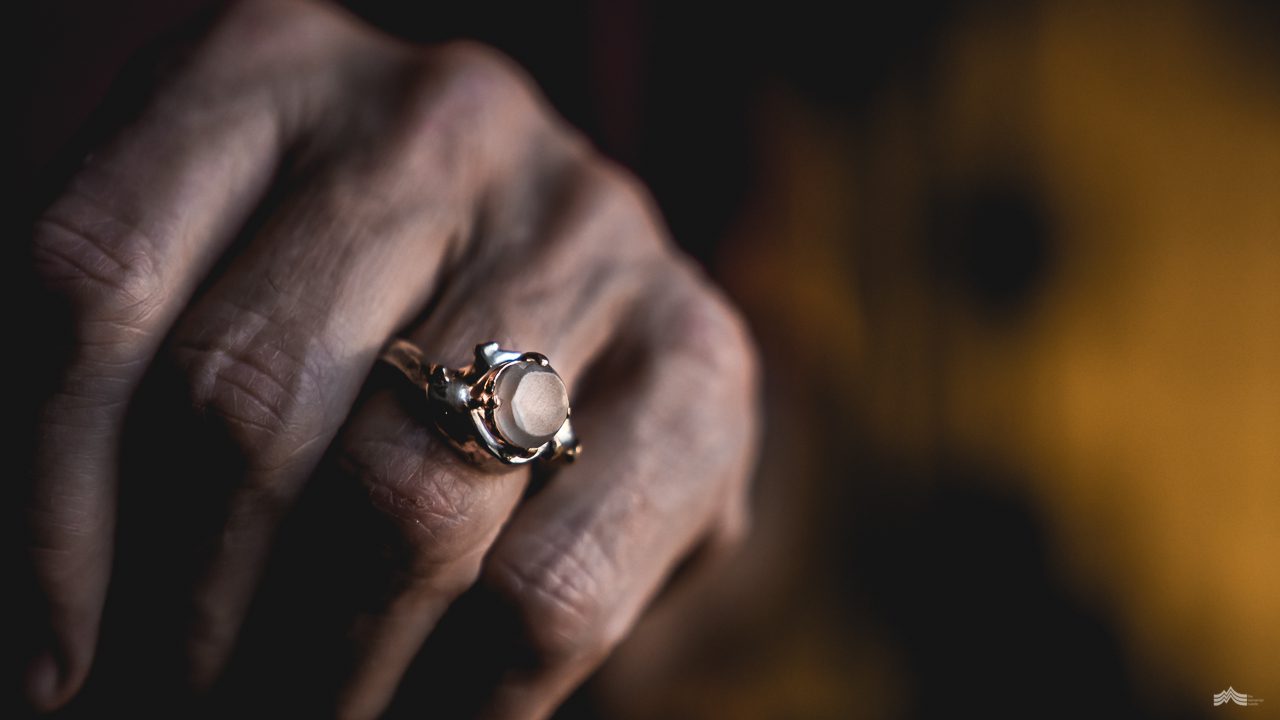 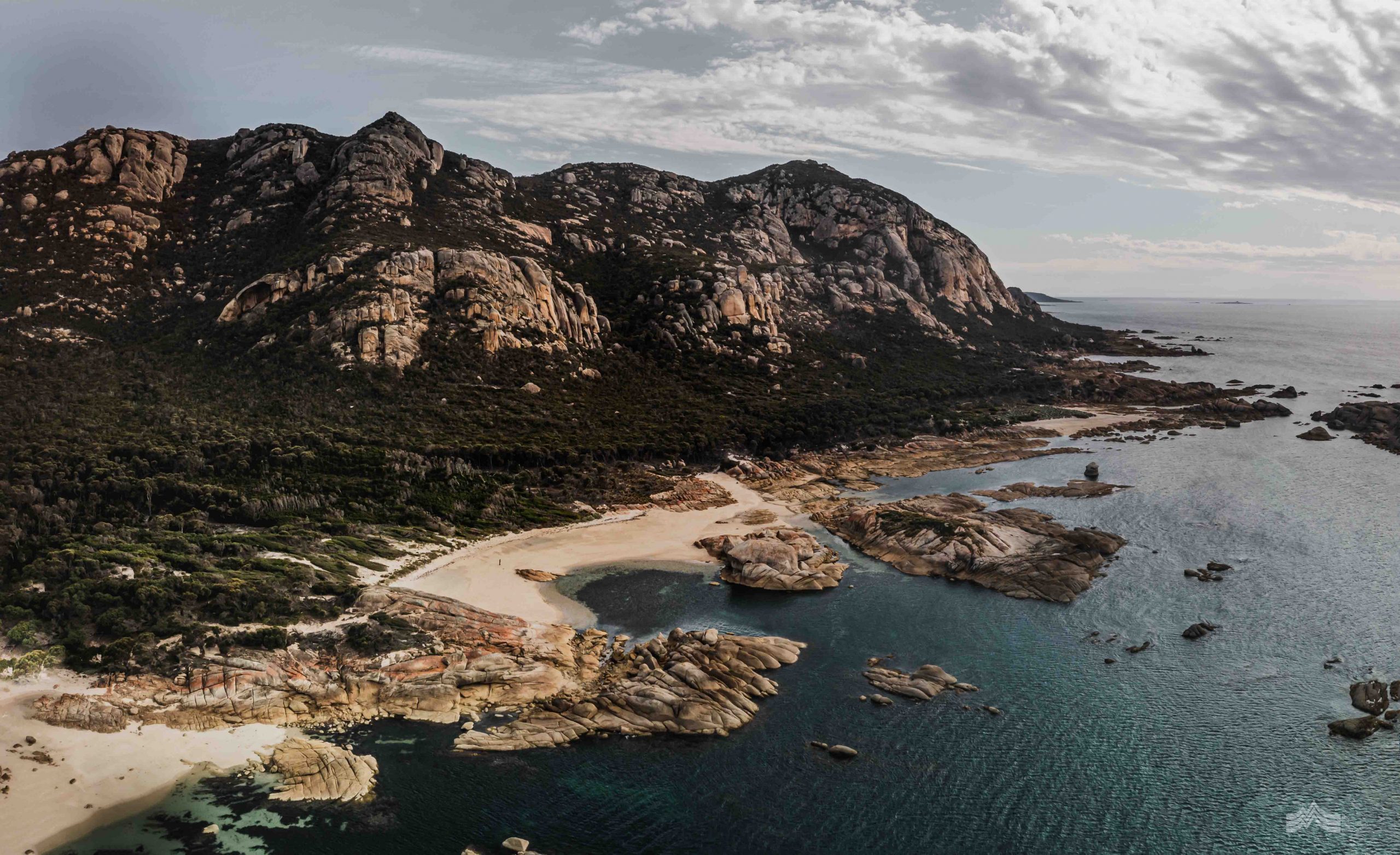 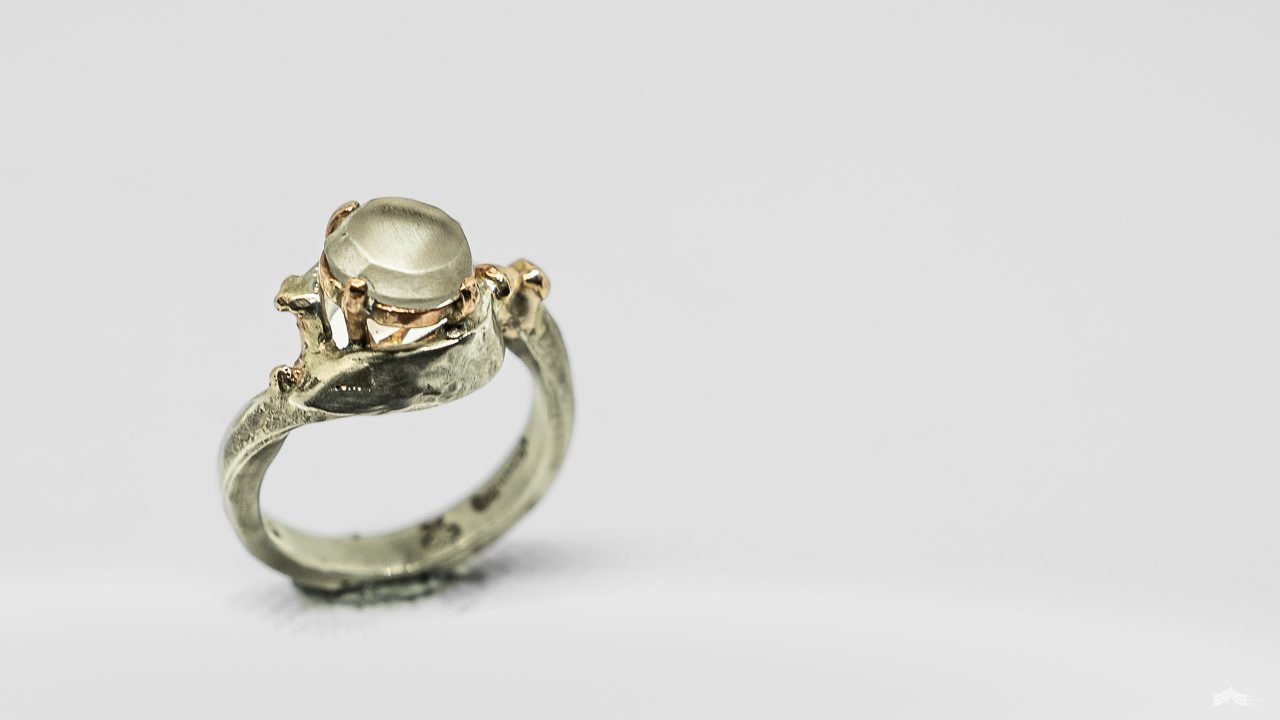 Sandro’s jewellery can be likened to a glorious carnival of the Tasmanian wilds. Shapes, form, textures and tones all convey a heady elemental influence. Imperfections are celebrated. Details are sought after. Makers marks are part of the charm.

A commitment to literally ‘playing with fire’ has seen Sandro’s style grow organically over time. “I tend to fuse gold and silver together a lot now,” he explains. “I often don’t know what will eventuate before I begin. A lot emerges throughout the course of the process itself. I really enjoy the whole thing…from beachcombing through to the final stages. Every piece is different.” From striking engagement rings to necklaces featuring squid beaks, cuttlefish castings and ordinary beach stones. Sandro’s work is indeed a breath of island individuality. A slow process of making through which art finally reveals itself.

“People are naturally curious and will pop their heads in here to see what I’m up to,” says Sandro of his studio in ‘the capital’ Whitemark. “It’s nice to pause for a while and have a chat with visitors as they’re wandering around the town. Genuine customers are very interested in watching me work and in my processes.” With a grin he adds, “Sometimes a chat winds up in a late afternoon glass of red…or a wander over to the pub for a meal.”

An unassuming little bunker perched next to the sea, White Shack is so named for its whitewashed outer layer. It’s served the island as a quiet workhorse for over half a century. First as the wharf office and later as a shellfish shucking shed. Tales of salty seadogs remain locked within its walls – a history that could undoubtedly trace the evolution of this stoic island community.

Sandro himself was born in Friuli, a small Italian province sharing a border with Austria and Slovenia. “It’s primarily an agricultural area,” explains Sandro, reflecting on his far-flung hometown. “But quite distinctive in its language. I was just four years old when I left, but I still have a sense of those early days and a connection to them through music. A Friulian folksong is a happy celebration of life on the land.” 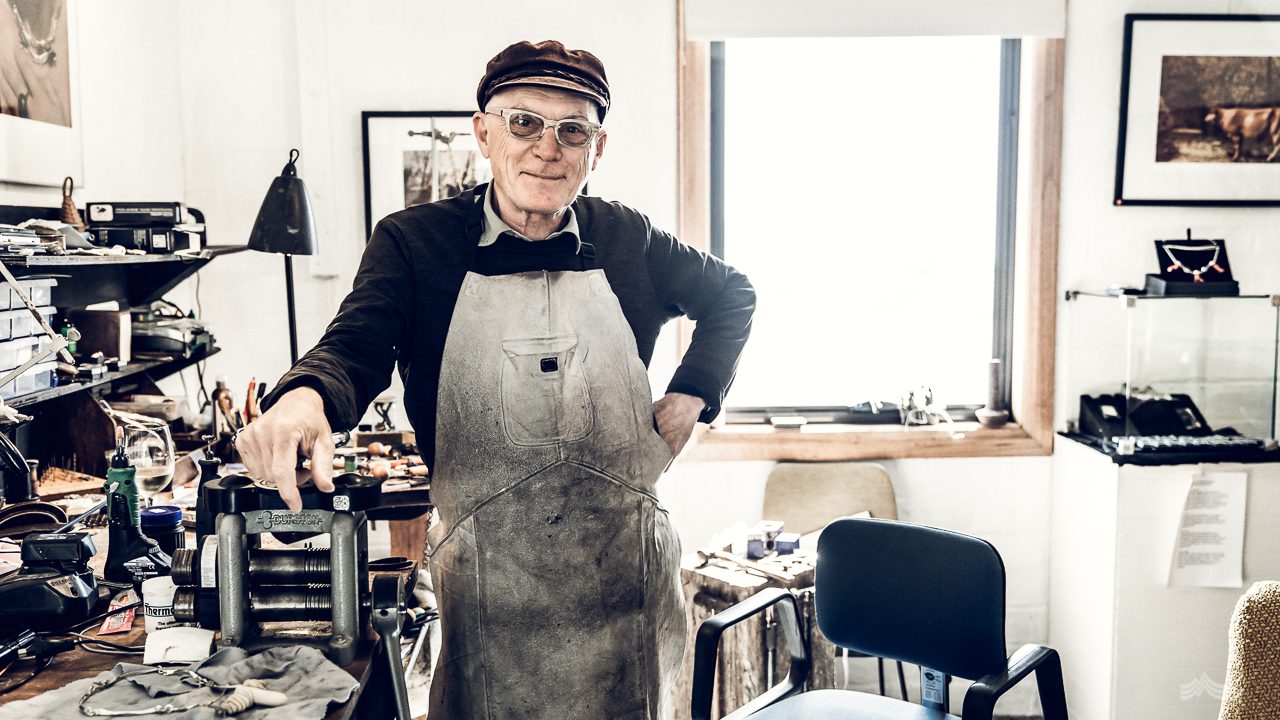 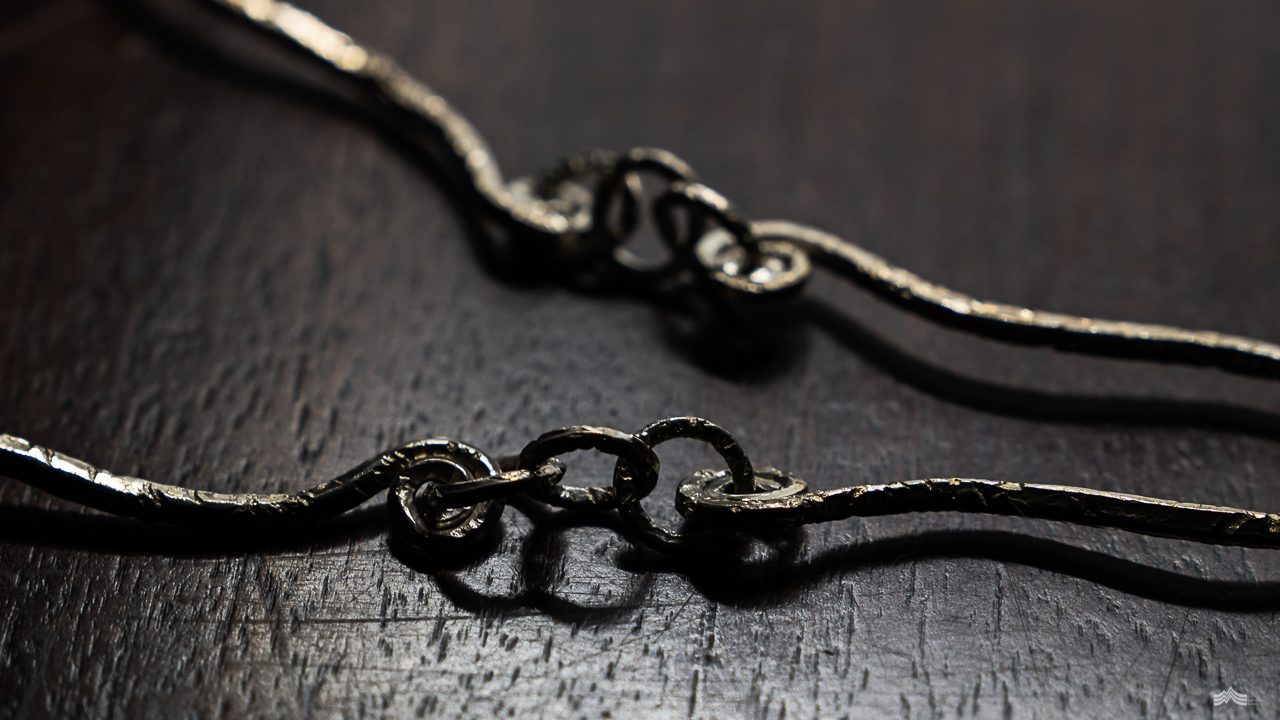 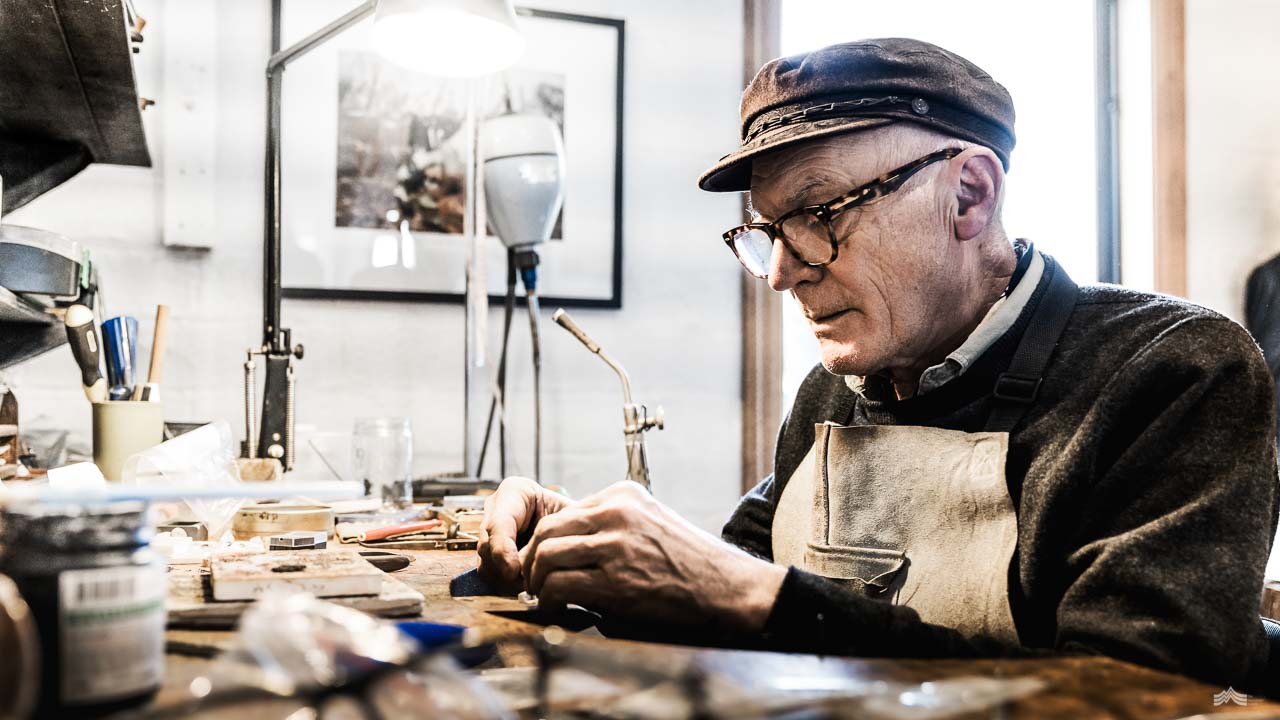 Sandro’s parents immigrated to Melbourne in the early 1950s, carving a home for their young family in North Fitzroy. “As a young man I initially set about studying architectural drafting,” says Sandro. “But I didn’t find it particularly interesting and soon picked up a gold and silversmithing course instead. It didn’t take long before I realised that this was something for me and I went on to graduate from RMIT.”

“We first came to Flinders after Judy, my wife, had begun researching her family history,” continues Sandro. “Judy discovered that her forebears were lighthouse keepers out in the Strait and hence she had embarked on a fascinating journey to trace that heritage. In addition to uncovering the family’s personal connection to the islands, what evolved was a realm of amazing artistic opportunities.”

Sandro’s wife is acclaimed jazz singer Judy Jacques. Sit with this intriguing pair for an afternoon and their shared love of art, history, music – and each other – rises quickly to the fore. Theirs is a tale of expression through understanding. “We started coming here more than 20 years ago,” nods Sandro. “We found ourselves visiting more and more often, and eventually made the move permanently in 2011. It’s definitely a place that draws you in.”

Grounded in a rich background of black African American gospel music, Judy’s powerful voice has seen her weave a long and successful career – although one that ultimately saw her pursue a creative and experimentalist course rather than a commercial bent. A professional highlight has been translating her deep connection to the Bass Strait islands into music. Her CD, Making Wings was inspired by her personal ancestral research and its connection to the islands. It is a collection of haunting original compositions that describe generations past of whalers and boatmen, lighthouse keepers and convicts – interspersed with traditional songs and stories from the islands. Sandro’s inventive use of harmonised trumpet stretches across multiple tracks. 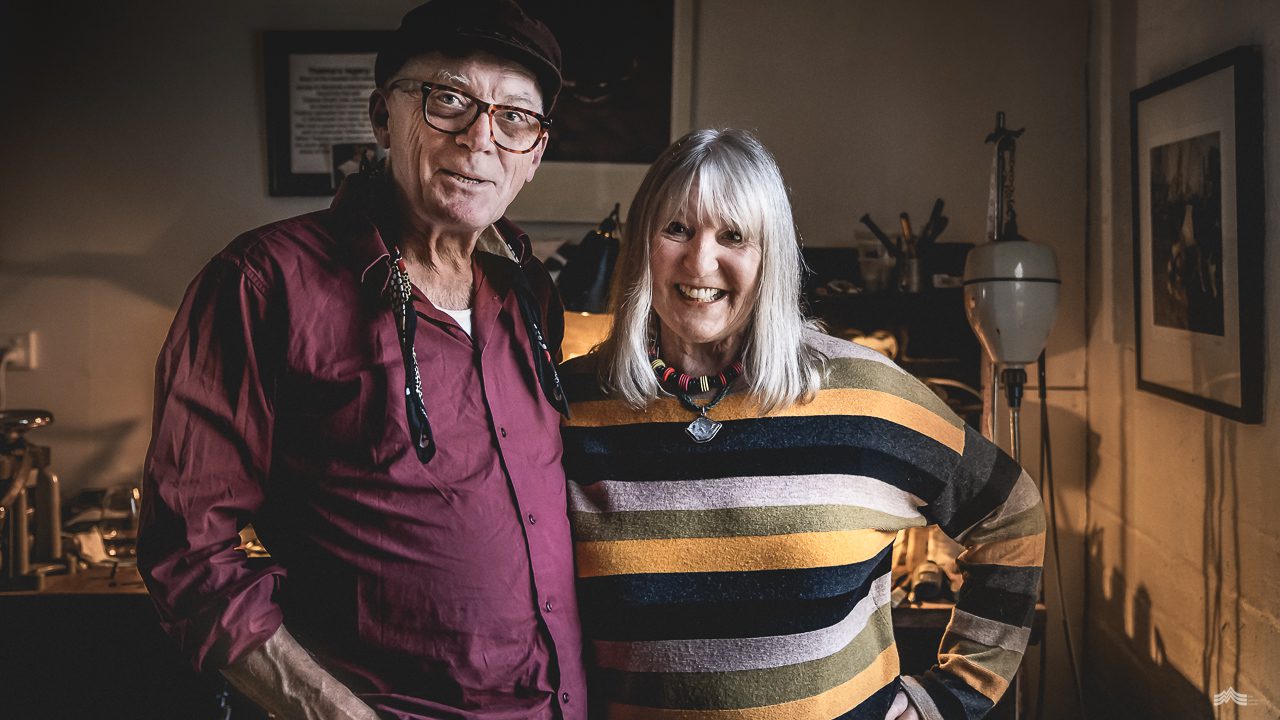 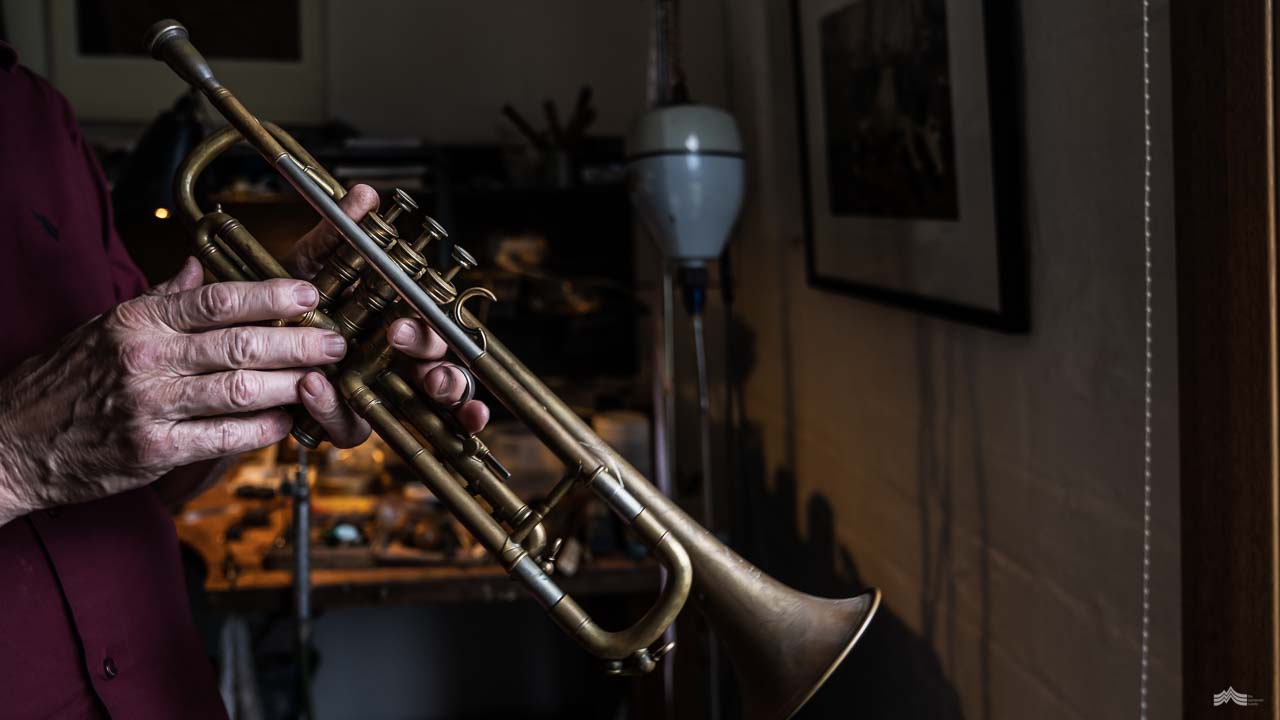 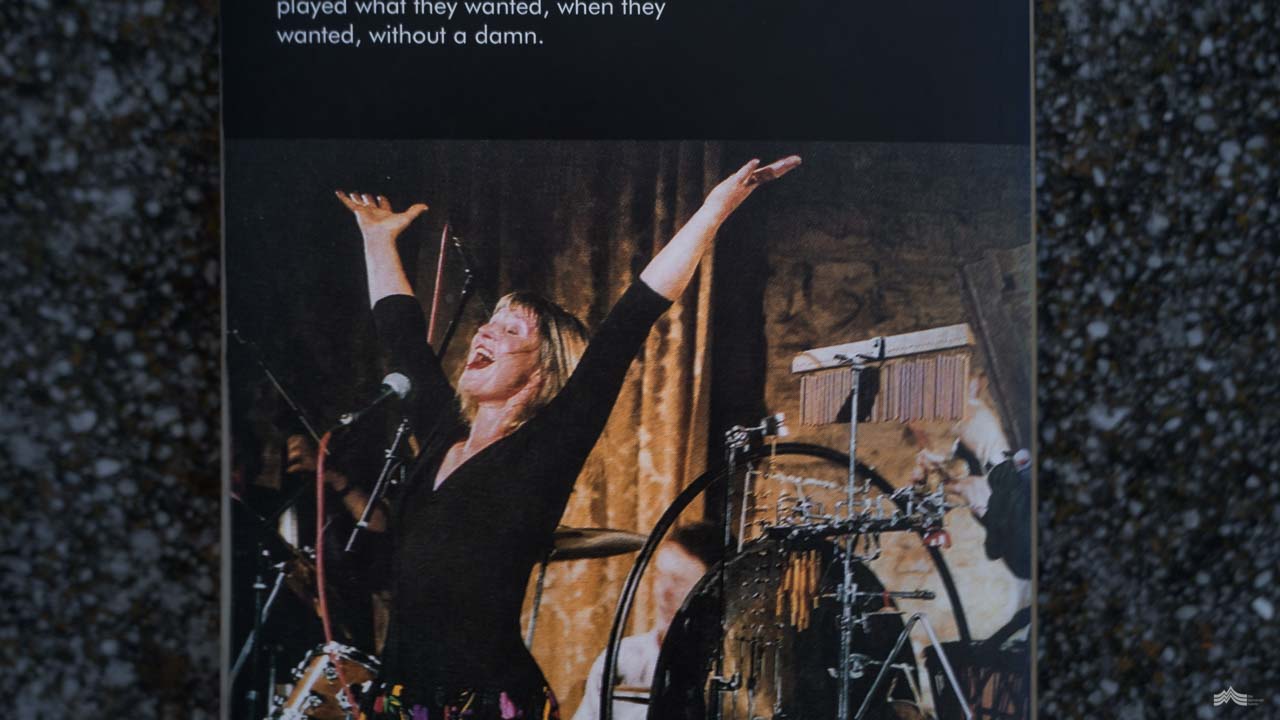 Alongside her own story, Judy read and gathered knowledge – everything she could find – about the lives and experiences of Tasmanian Aboriginal people, including Fanny Cochrane-Smith, an Aboriginal woman who was born at Wybalenna. “Her songs and voice were among the first recordings made in Australia,” explains Judy. “We both developed deep respect for the music and history of the islands. There is so much complexity here…cruelty and beauty…you can feel it…especially at Wybalenna. It’s important that we work and grow from understanding what has happened here. The brutal reality of Tasmanian history…then we will all be on the journey towards healing”

“It was a long process… as it should be…life changing, but I obtained permission and blessing to revision and record twoof Fanny Cochrane-Smith’s songs. I am greatly honoured,” reflects Judy slowly. “It was a long, emotional, but extremely rewarding journey, but it has always been important to me that music, especially in my later career, has true meaning. I found strong relationships within the Aboriginal community and warm friendships, in particular with the late Aunty Ida West and the late Aunty Enid Dillon. They supported me right throughout the process and I think what I delivered was a work that showed proper respect and honesty, a work of integrity that we feel still has relevance after twenty years.” Fittingly, Making Wings was awarded the inaugural Bell Award for Best Vocal Album in 2003.

Listening to her reflect on the two decades that have unfolded since the release of Making Wings, Sandro is clearly proud of Judy’s achievements and how the experiences have shaped his own development as an artist. “We both feel connected to the sea and land here,” nods Sandro, pausing to reflect on their island home. “There is a real sense of depth of history here. It’s like a microcosm of everything; history, people, environment. The friction, simplicity and complexity that lies out here in the middle of Bass Strait is quite extreme.”

“This island has given us so much,” muses Sandro. “This natural world is just divine. It’s powerful and informs everything we do.”

A visit to Sandro’s studio is all about slowing down. Nestle in on the couch and listen to him explain the piece he’s currently crafting. He’s warm in his explanations and generous with his time. There’s probably jazz playing in the background – the perfect backdrop against which to mull over what this talented artist can create for you. He’s lavish with local knowledge too and will send you off in search of where to find your very own diamond. You’ll leave feeling like you’ve made a new friend.

Sandro’s work echoes the very essence of Furneaux culture. Simple and synchronistic on one hand, but complex and wild on the other. With his pieces sought after by private collectors around the globe and held to acclaim by national art prizes, this deep conversation with the elements is only set to continue.

You can drop in on Sandro at the White Shack on the esplanade at Whitemark, Flinders Island. He’s there every Wednesday to Saturday from 11am to 4pm, or by appointment via 0429 383 375. 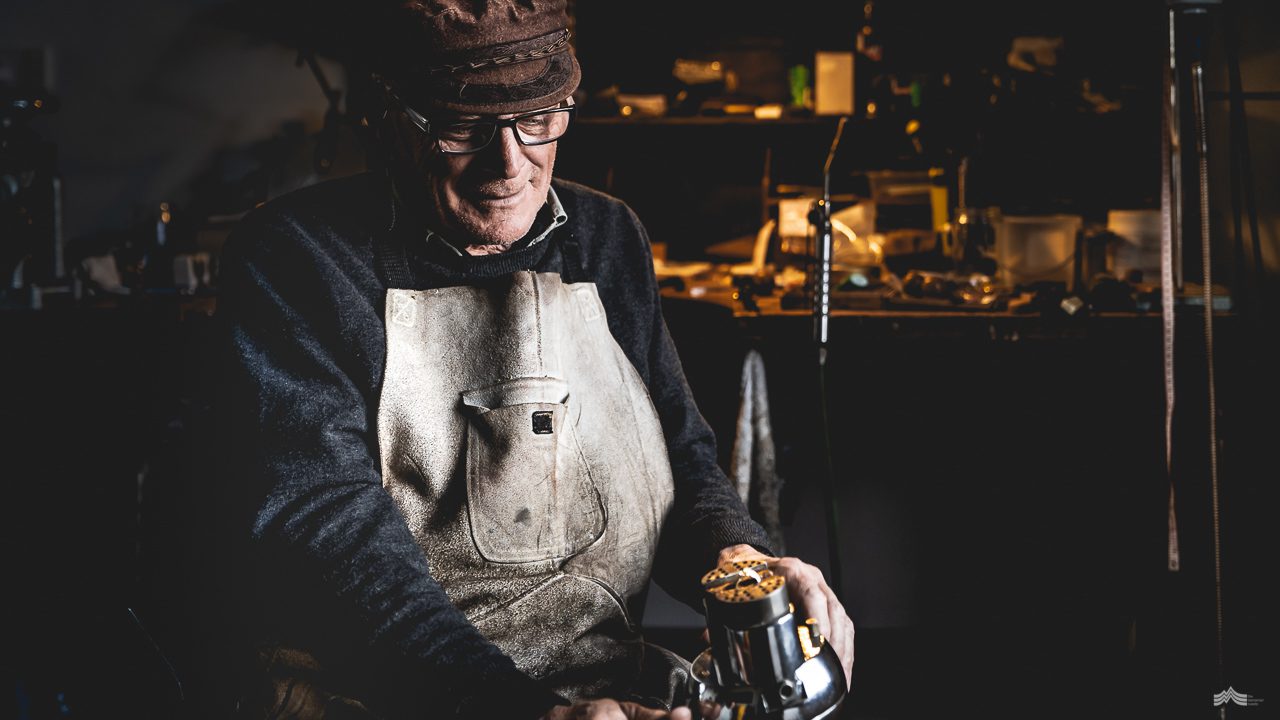 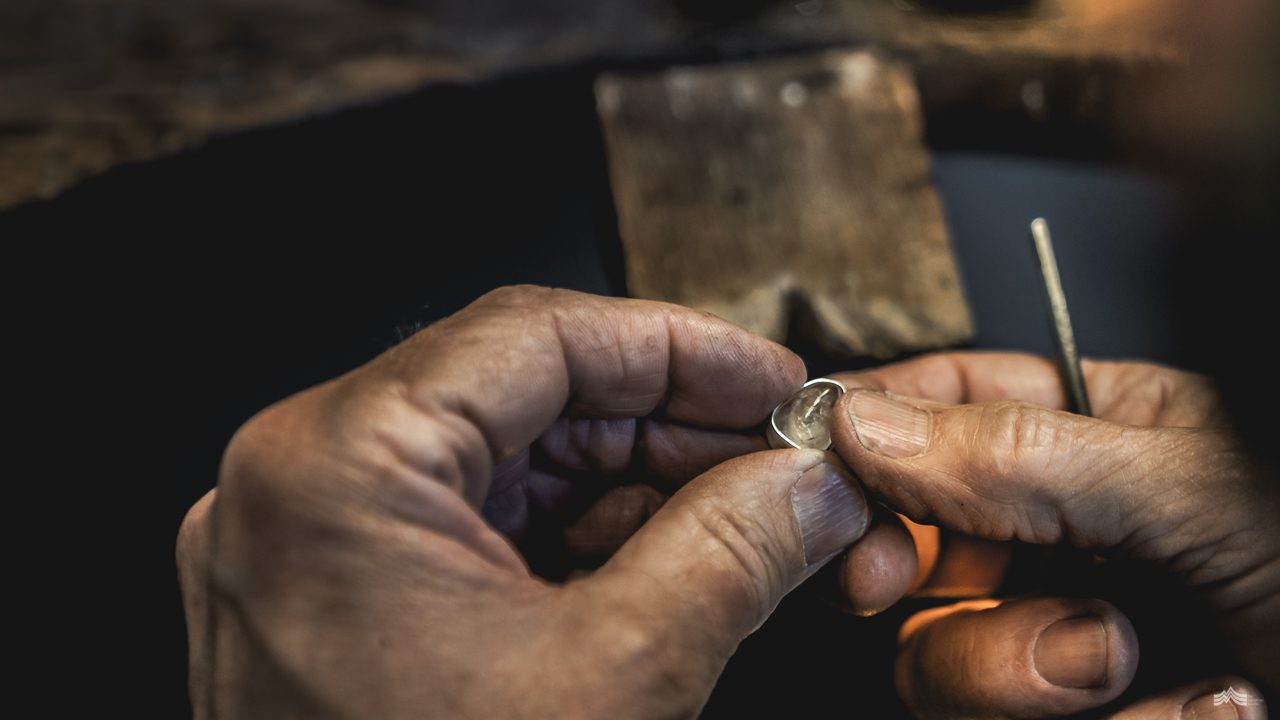 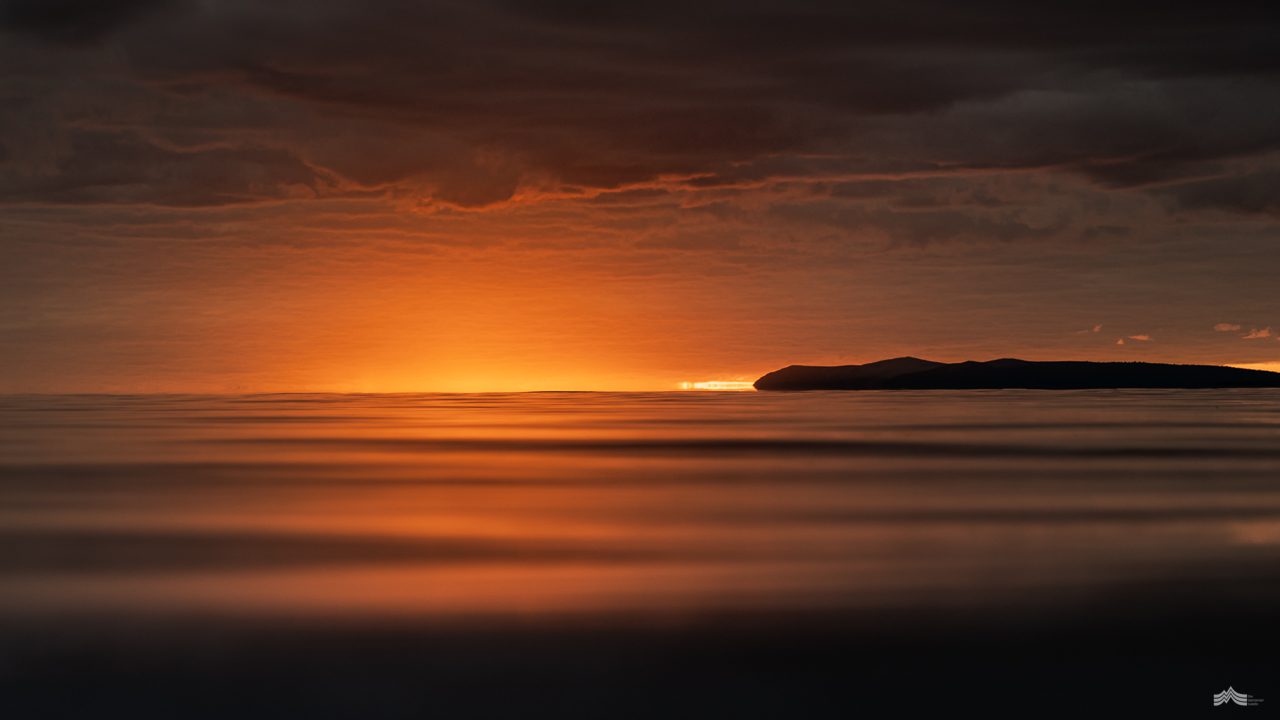 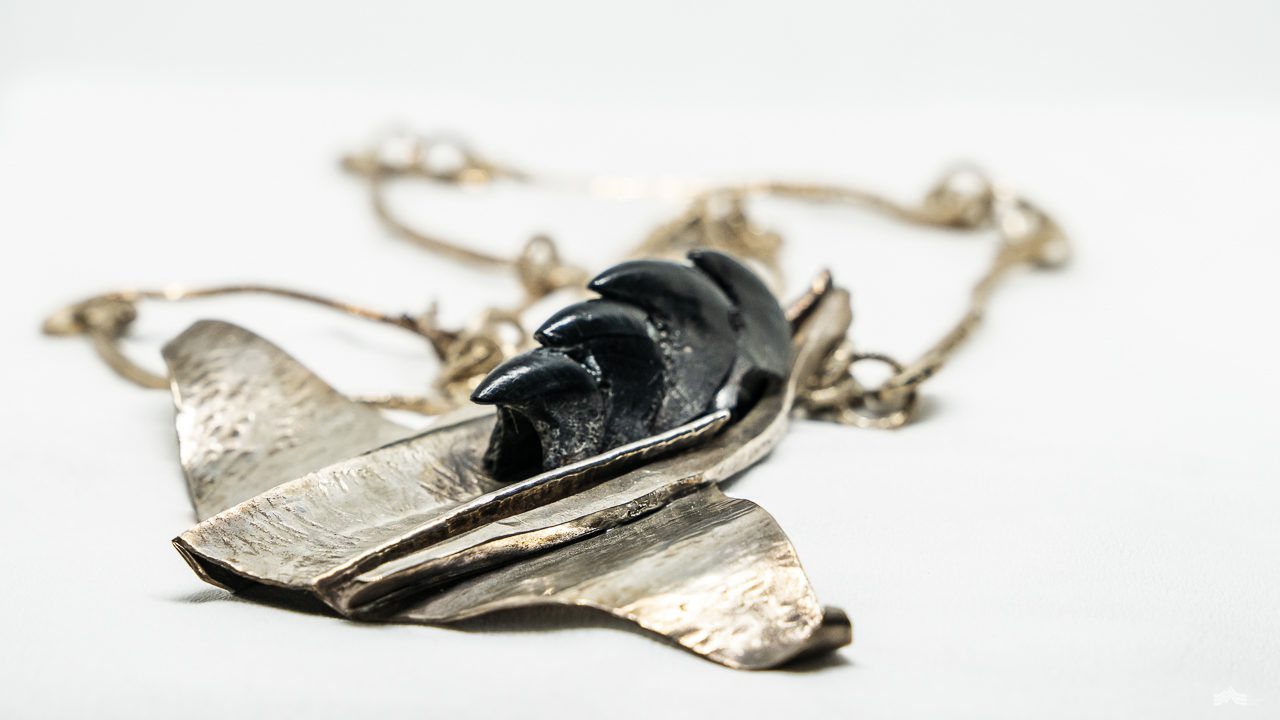 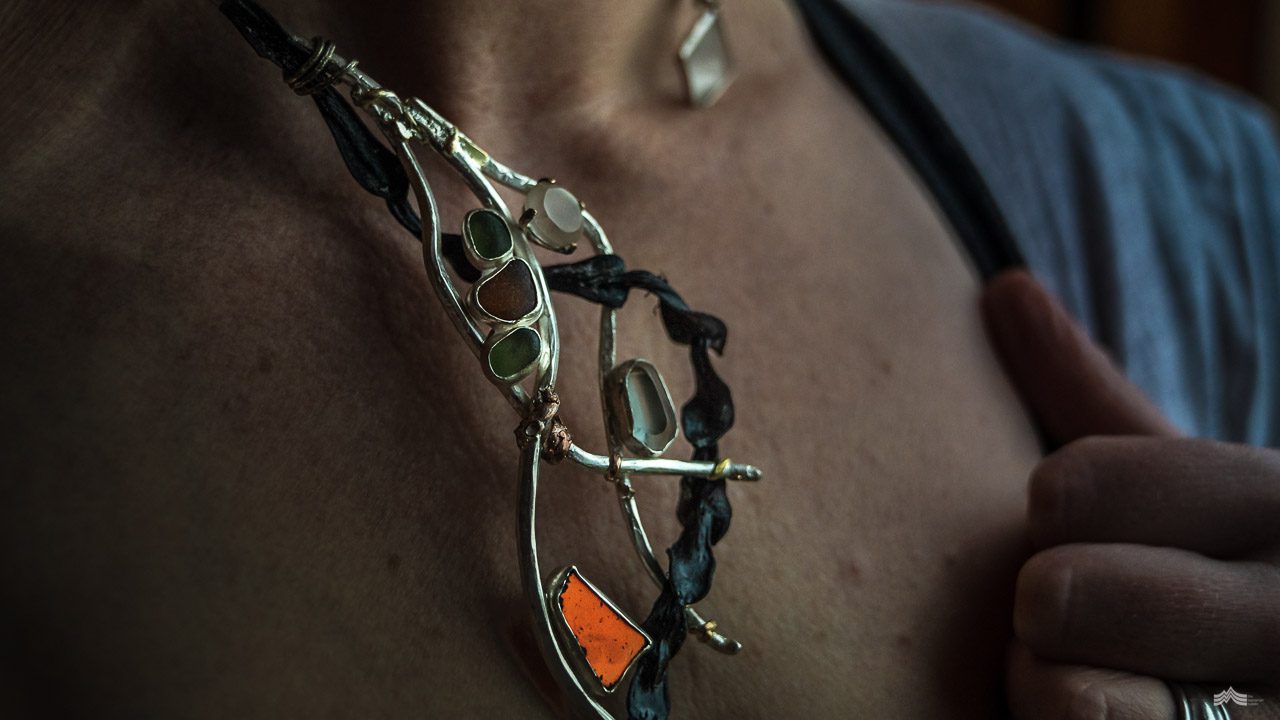 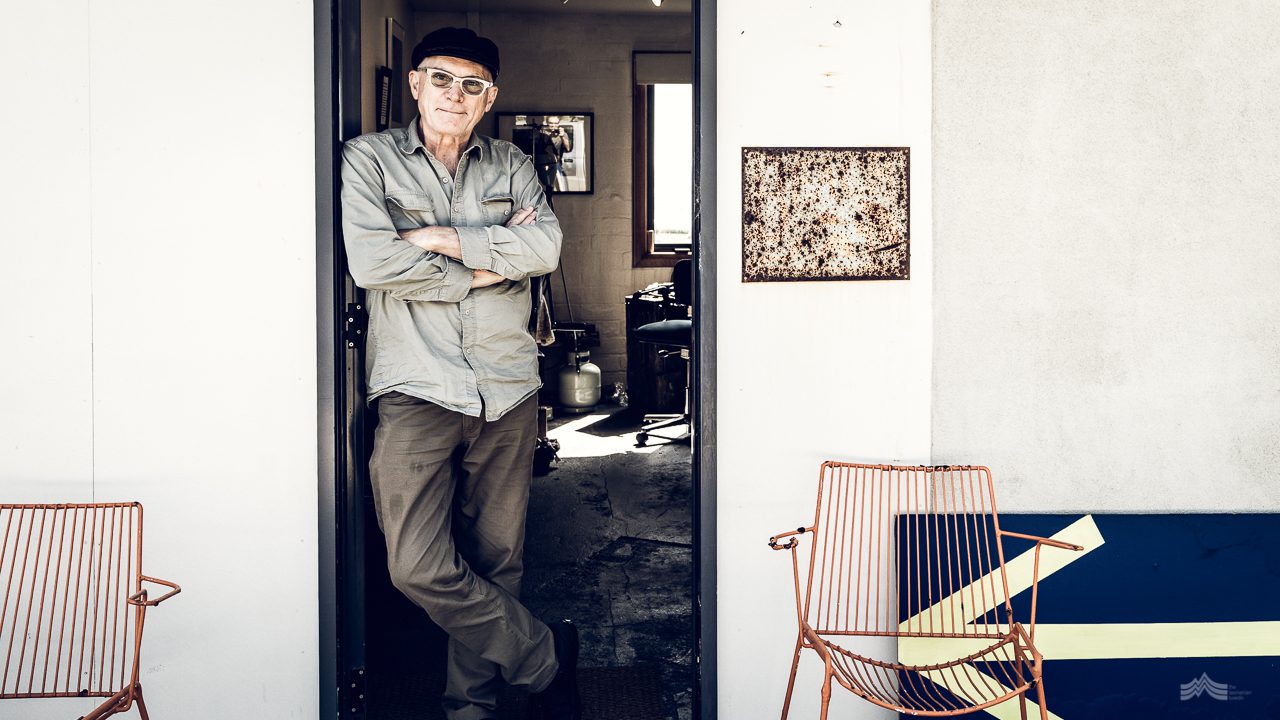