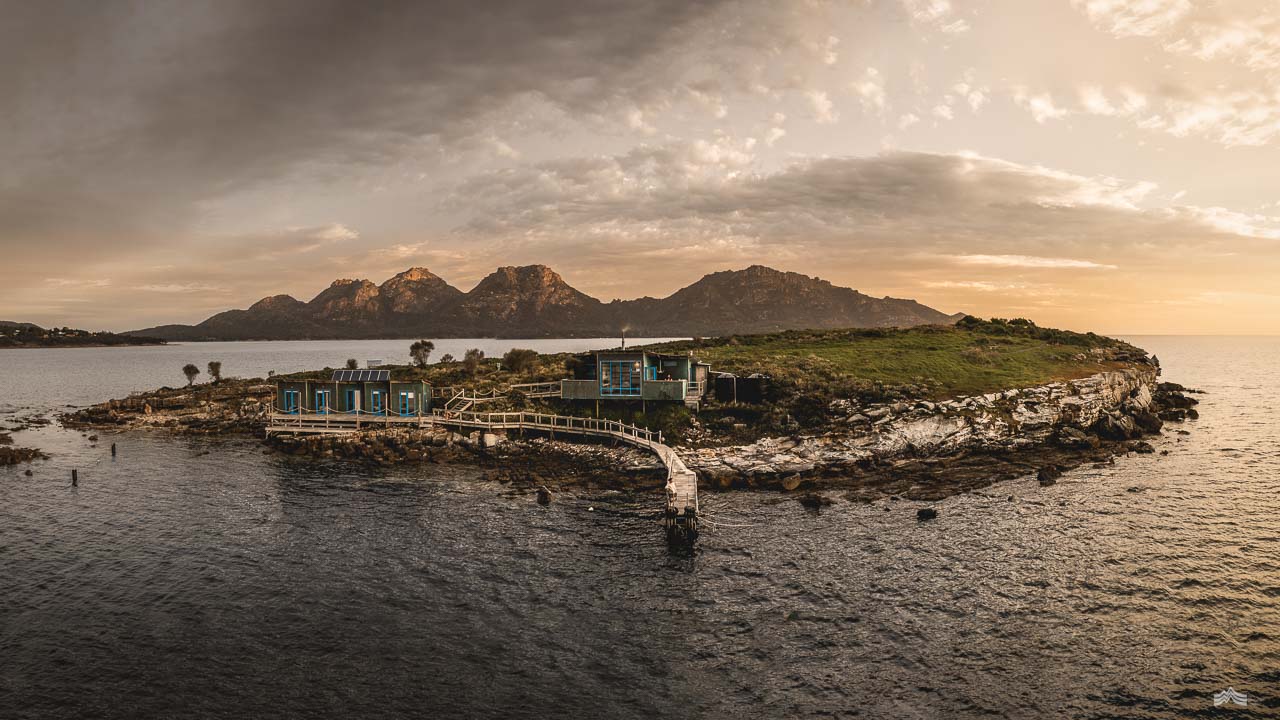 Perched snuggly on the high tide mark, hovering quietly over the rocky platform below, sits a pavilion like no other. An architecturally designed copper-clad retreat beckoning one to find comfortable shelter from the elements.

Picnic Island is a place for wild pursuits. The decadence that comes with isolation creates a special kind of magic. Out here the pristine surrounds are yours alone to explore – from the bewildering array of cool temperate sea creatures that lurk under the ocean’s surface, to the twitchers paradise of feathered friends that exist above. It’s equally a place for unashamed imagination. A hidden retreat for reading, writing, sketching and dreaming. It’s where the natural world collides with history, and where solitude reigns supreme.

And it can all be yours. 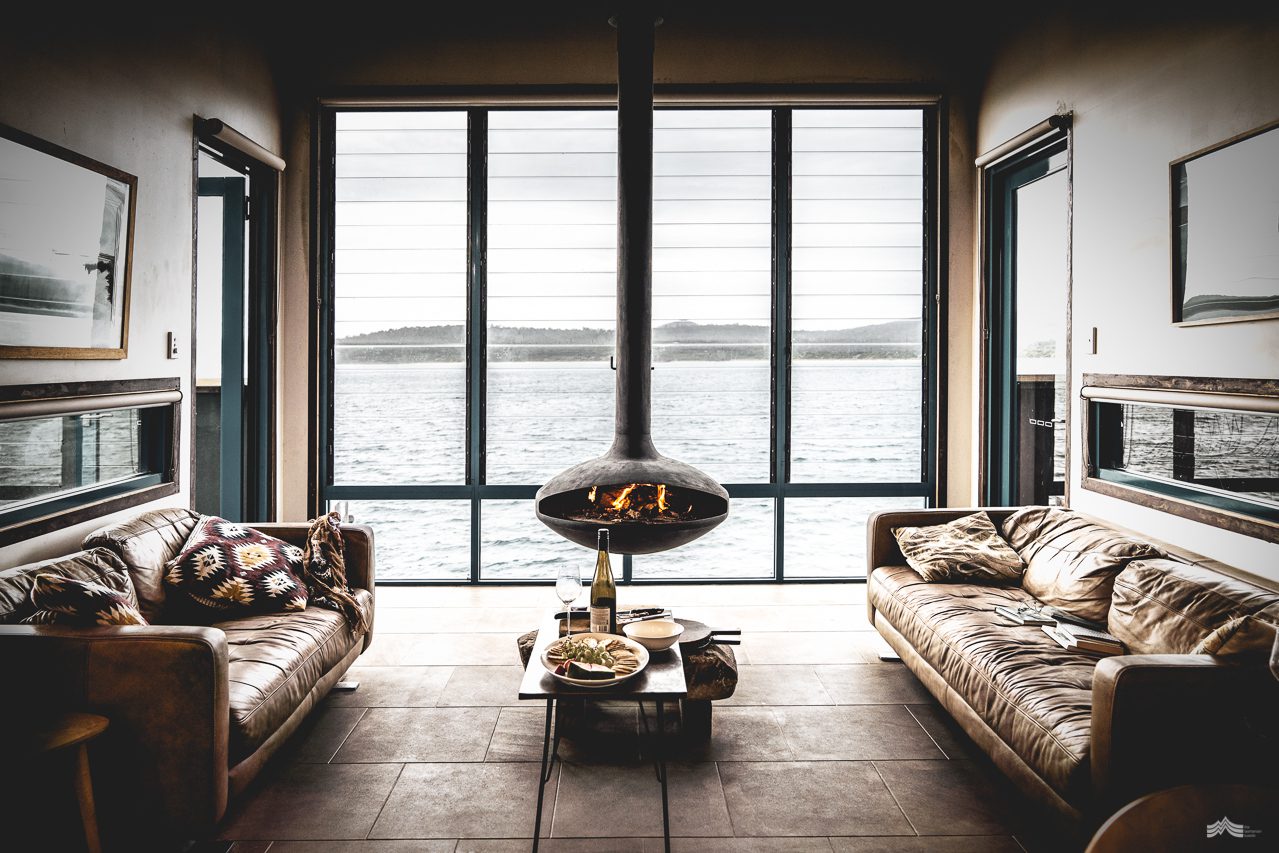 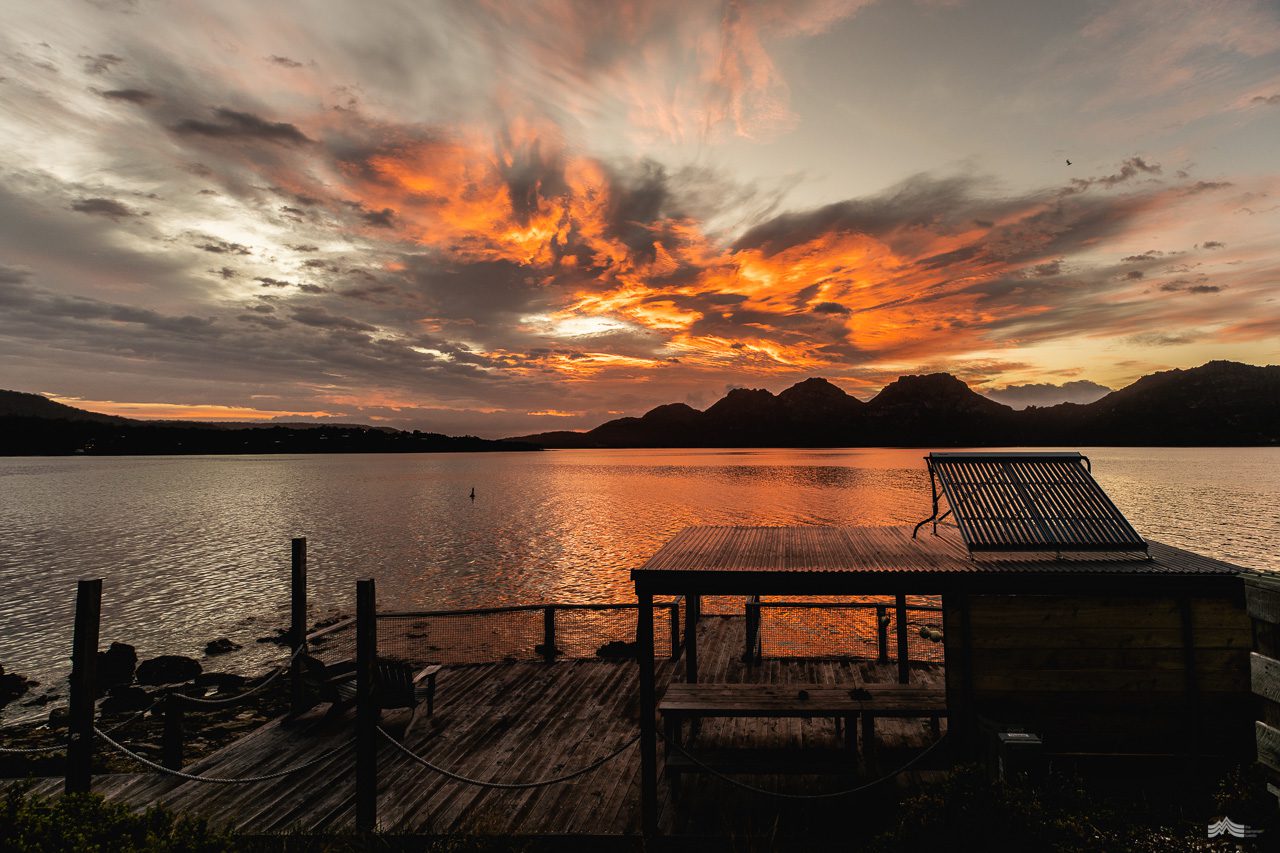 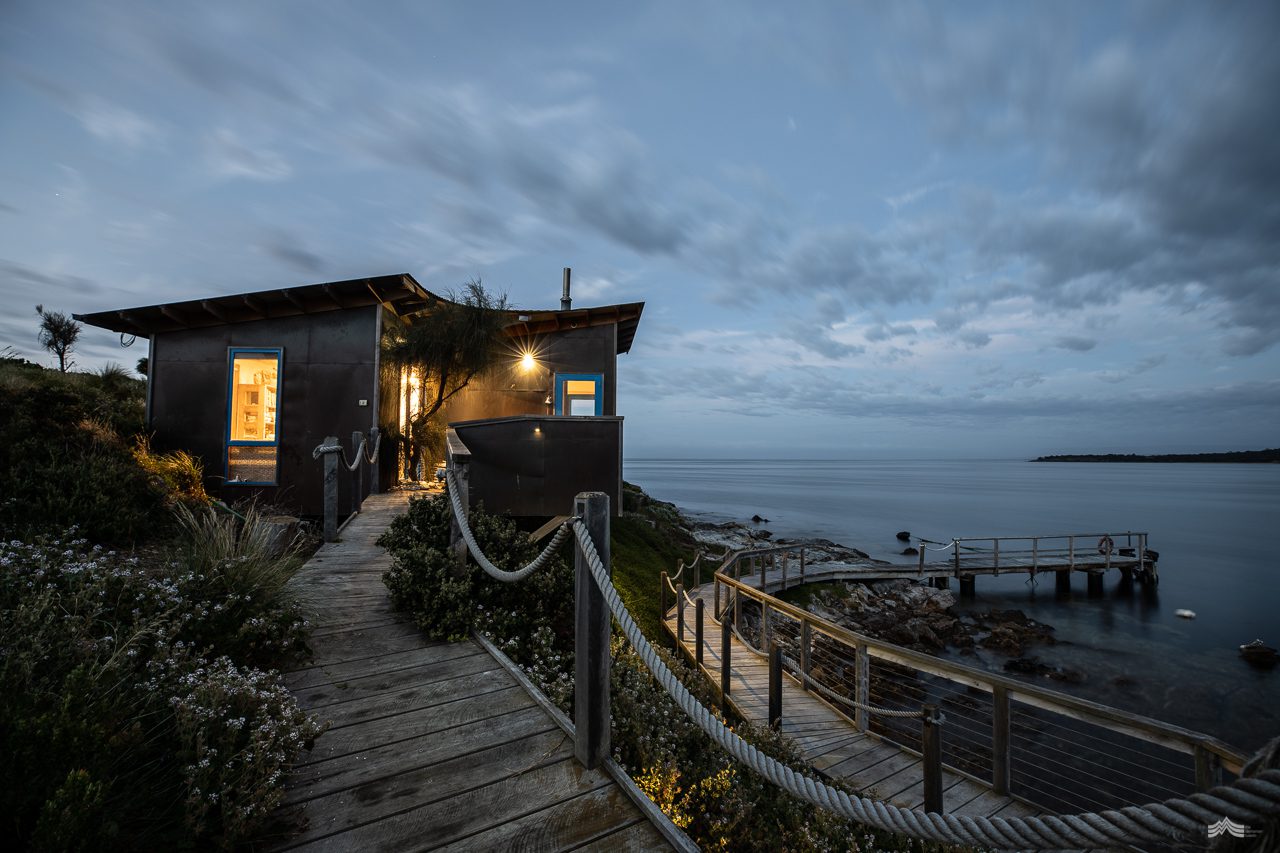 There are only a handful of privately owned islands in Tasmania, and even fewer that welcome you to call them your own. For many years Picnic Island was the domain of wild family escapades belonging to the Newton-Brown family. In the ethos of the classic Tasmanian shack tradition, it represented the ultimate in reconnection and exploration. Imagine trying to row a boat laden with supplies and three small children a kilometre offshore in a blustery headwind? Or perhaps knocking up a tiny hut with nothing but hand tools whilst you prepare dinner over an open fire? They did it all and loved it – then it came time to share it with others. 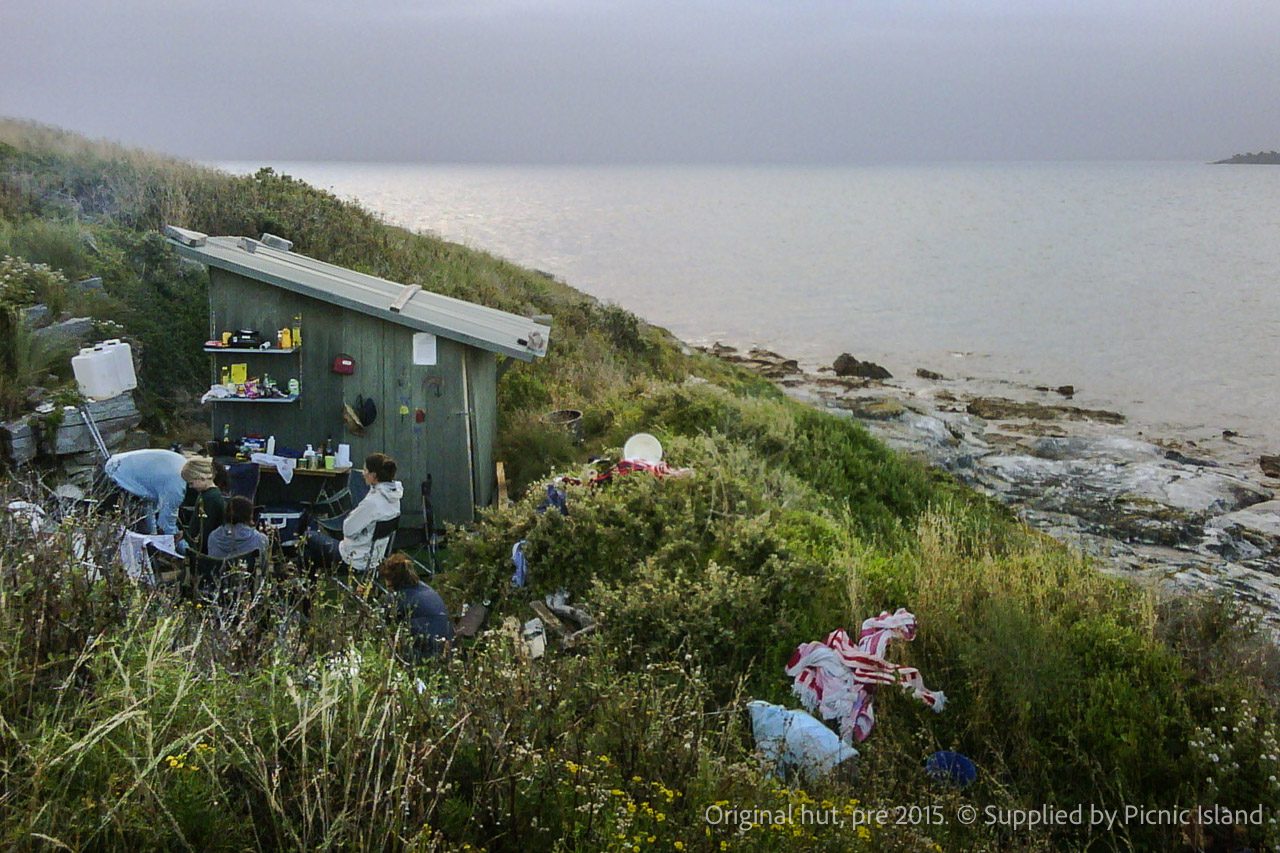 Picnic Island was painstakingly reimagined to preserve its charm whilst spreading its joy. It now provides a haven for extended family groups, serves as special getaway for careful selections of close friends, and delivers the most unique of intimate wedding locations. Comfortably accommodating 10 guests, it’s the perfect way to immerse yourself in the very heart of Tasmania’s glorious Freycinet Peninsula and disconnect from the outside world. Its bliss lies in the ultimate balance of comfort, sheer natural delight and an almost indescribable sense of castaway magic. 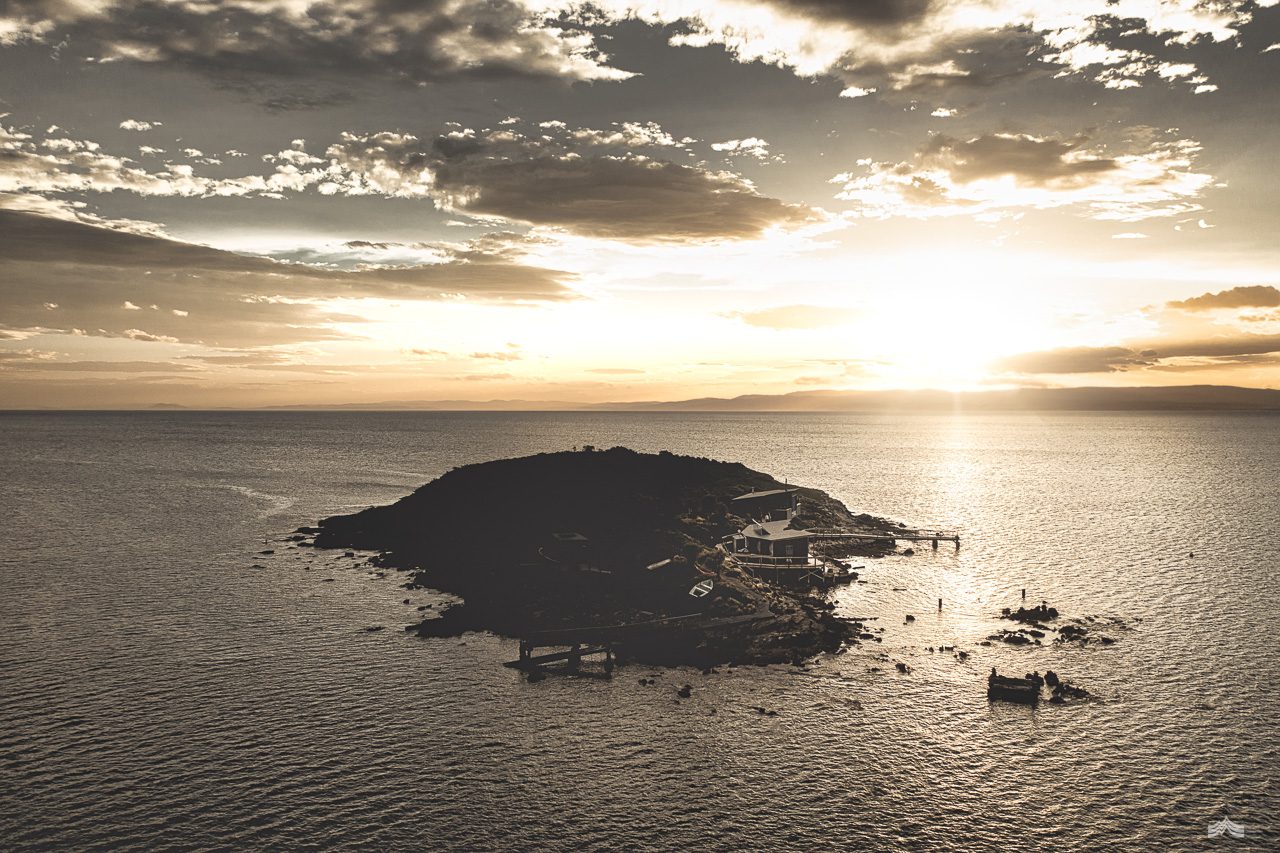 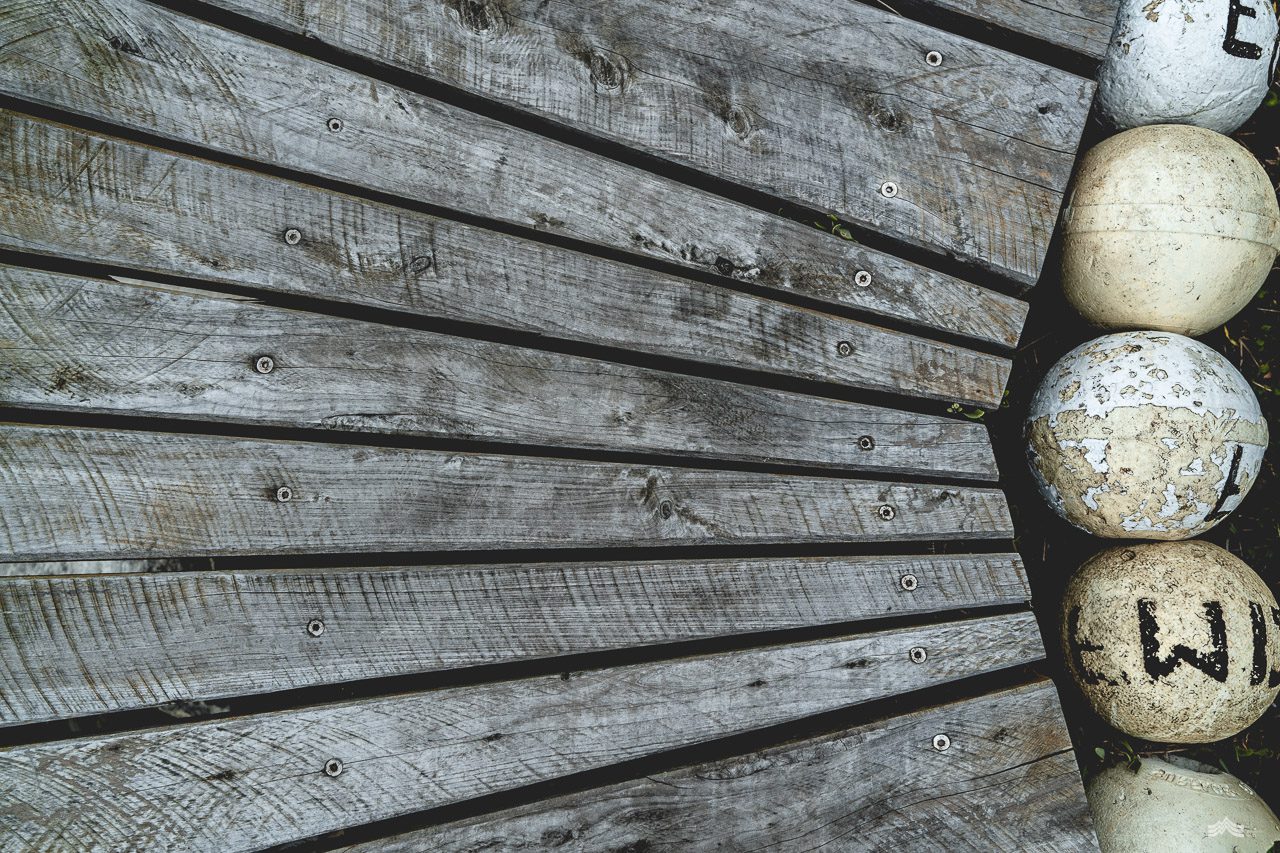 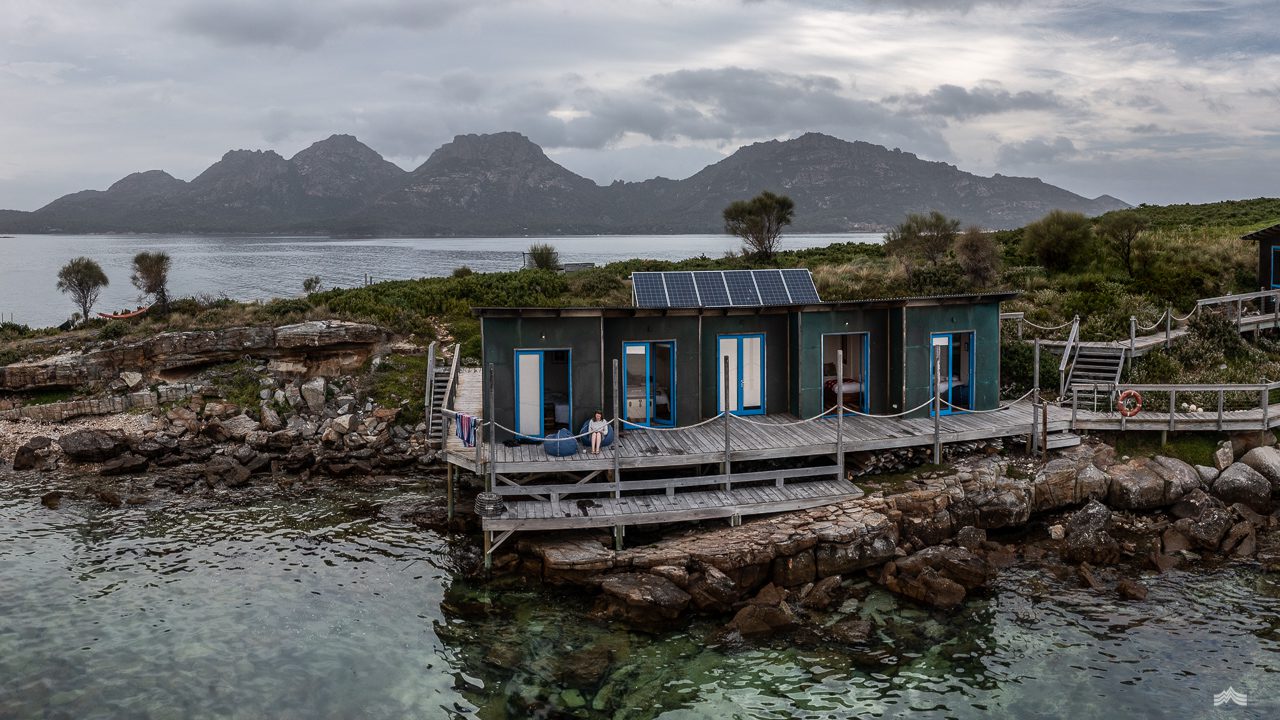 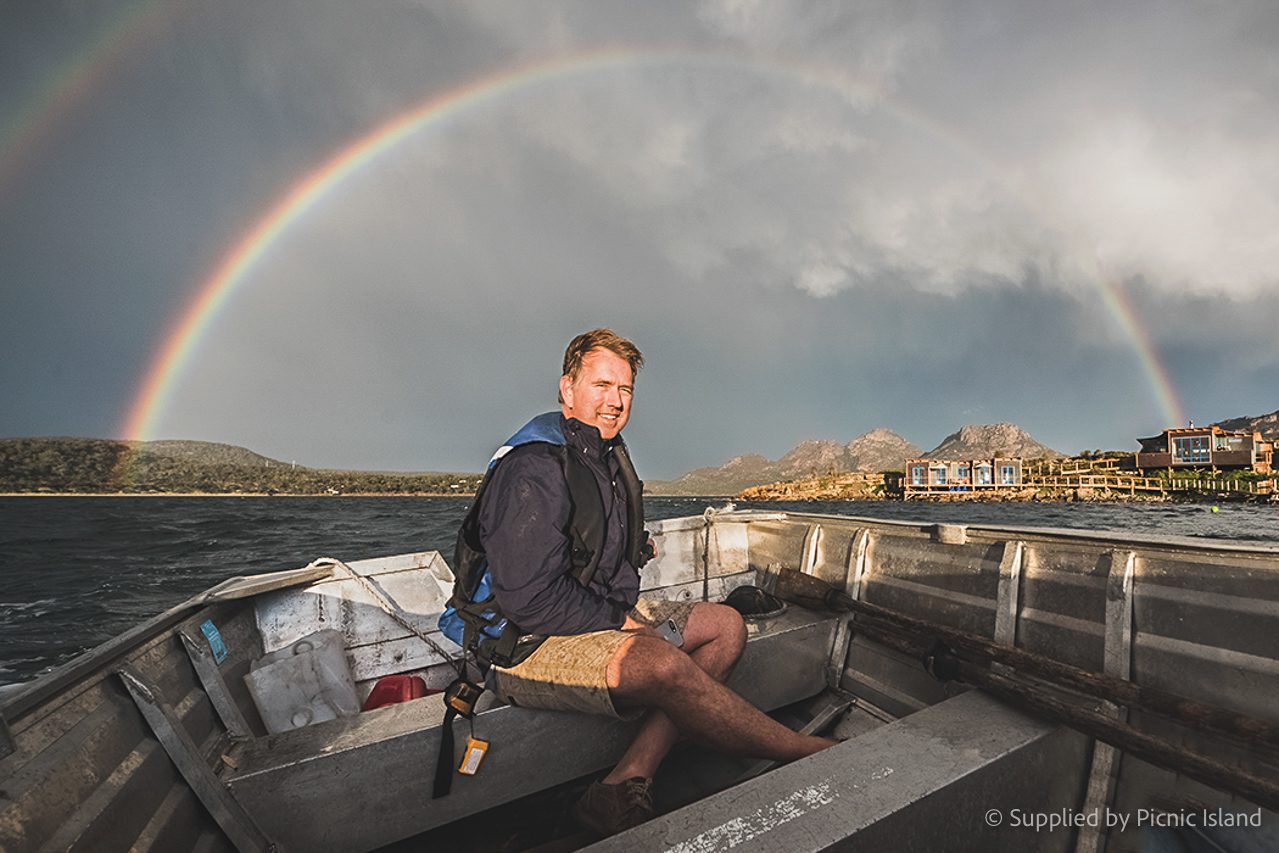 The living pavilion is best described as rustic luxury. Natural materials fittingly line this cosy coastal hideout. The sandstone tiles – reminiscent of a bygone era – are soft underfoot, whilst recycled timbers line the roof and form the bones of a generous and well equipped kitchen. It’s perfect for preparing those long sumptuous brunches that linger for hours, tempting fellow guests to arise from another restful slumber.

The centrepiece however is undoubtedly the contemporary black fireplace that floats suspended from above. Despite the high ceilings it warms the space beautifully, thawing your bones whenever the peninsula sends an icy breath your way. Sink into the ageing leather lounges and your eyes will wander aimlessly between the flames licking the oval cast iron pit and the expansive watery delight through the window beyond. Evenings here are a little dizzy in their comfort. You’ll be drunk on everything from the view to the tales hidden within the library of local reference books – from Tasmanian history to all things maritime.

It’s likely that you’ll strike all weathers too. When the winds are hailing from the north, sending white horses galloping across the bay beyond, they’ll signal their arrival by whistling through the rafters. It is when the calm returns that you can open the magnificent wall of glass louvres to invite the gentlest of sea breezes to join you indoors. Respite from those languishing days of Tasmanian summer heat leaves salty whispers on your skin. 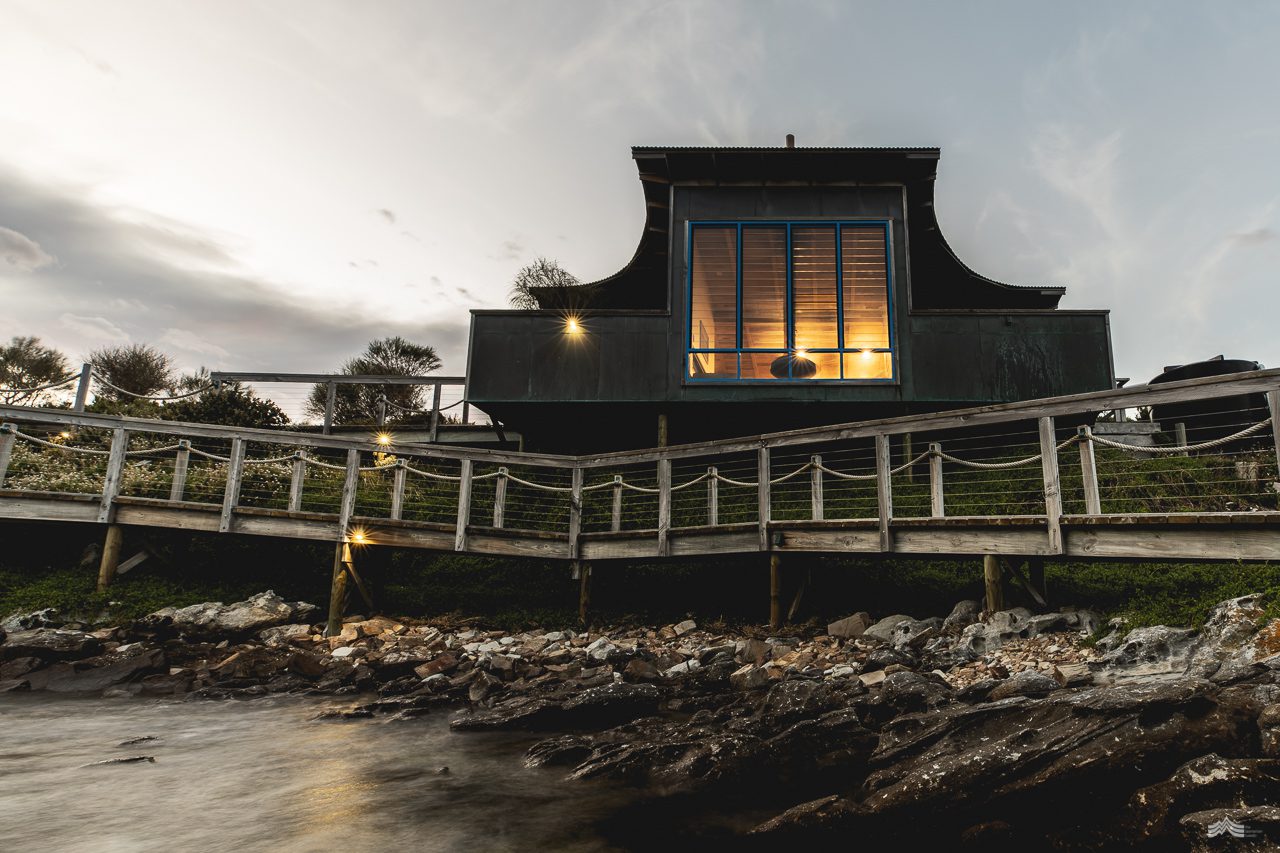 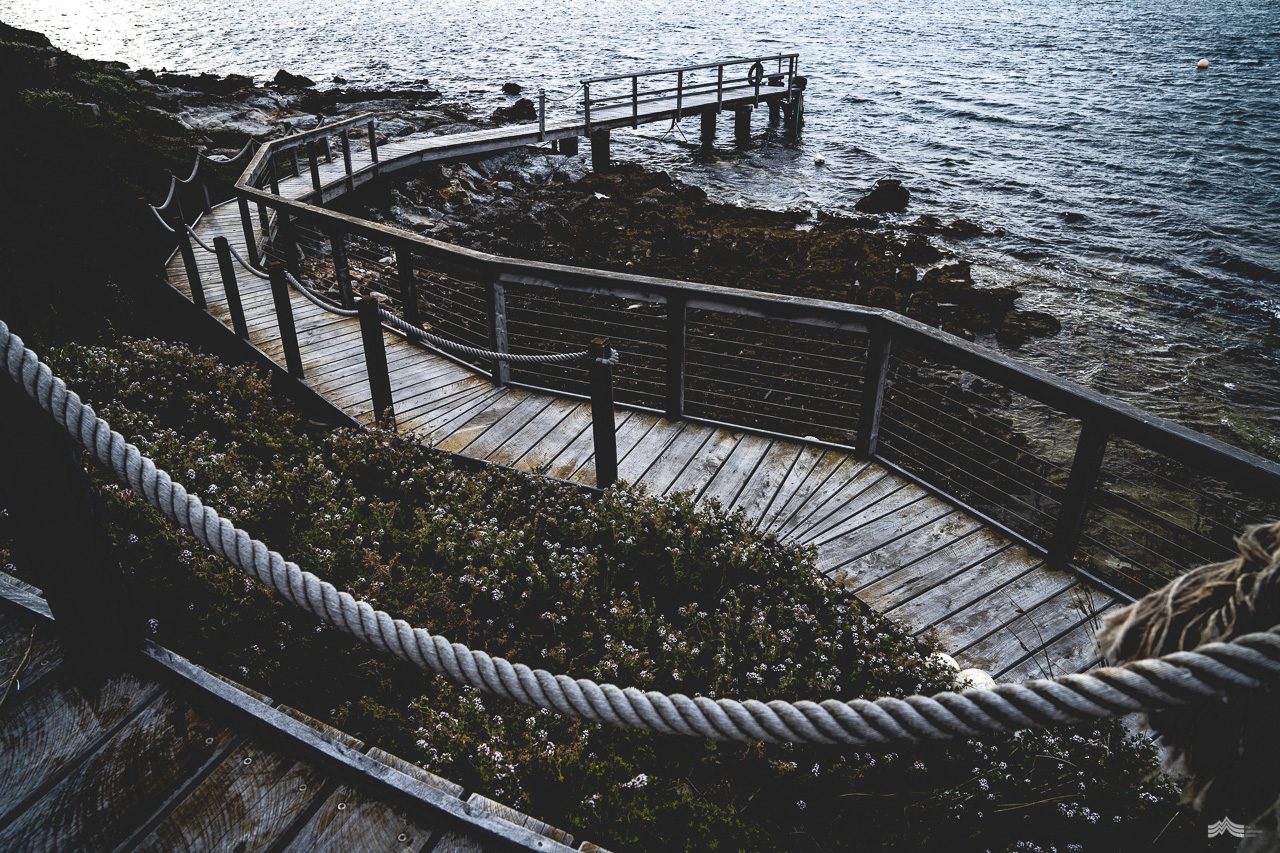 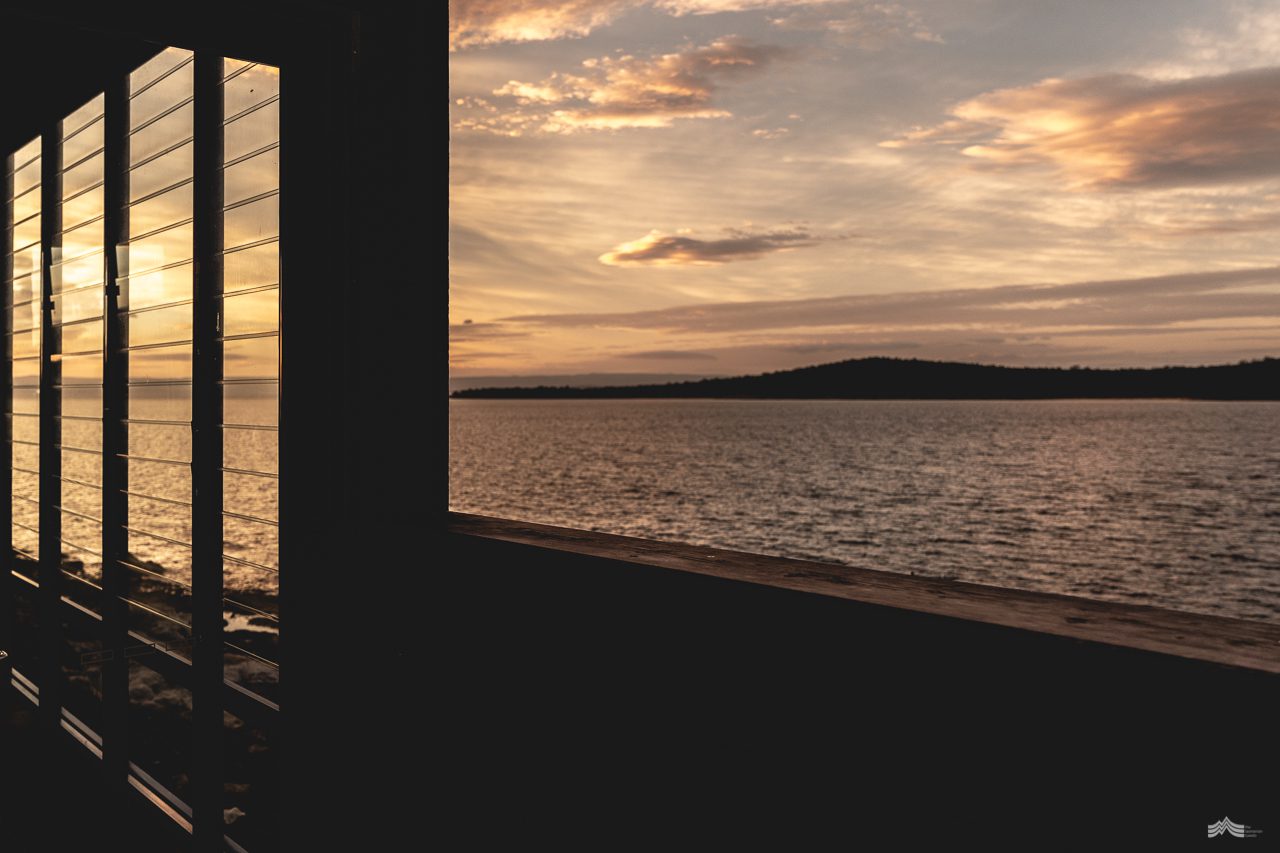 Prior to European invasion, the surrounding area had long been home to various bands of the Oyster Bay tribe, the Paredarerme. During the warmer months, tribes would congregate around the rich coastline to harvest shellfish and marine plants. This is the domain of abundant abalone, rock lobster and sea urchins – explore the islands far eastern point and you’ll find an ancient shell midden. Once winter hit, tribes would move further up the rivers towards the marshes to hunt birds, kangaroos and wallabies. The Linetemairrener people however lived at nearby Moulting Lagoon year round. One wonders about the land’s rightful owners and contact they had with the early colonists. And one in particular – Captain Robert Hepburn.

Captain Hepburn arrived in Hobart Town in 1828. Whilst the six month journey from Scotland aboard the Greenock was undoubtedly taken in his naval seafaring stride, the same may not have been true for his wife Jacobina and their brood of eight children.

After a dismal attempt to farm further inland close to the township of Avoca, Hepburn moved to the coast in search of more fertile soils and opportunity for whaling. The generous land grant he obtained at Swanwick included Picnic Island – a small one and a half acres that proved highly useful. Hepburn used the island as a breakwater for his whaling boats, utilizing convict labour to mine sandstone from its core when the whales weren’t running. Picnic Island is one of the few locations in the area where sandstone can be found – the region of course being defined by its stunning granite formations. 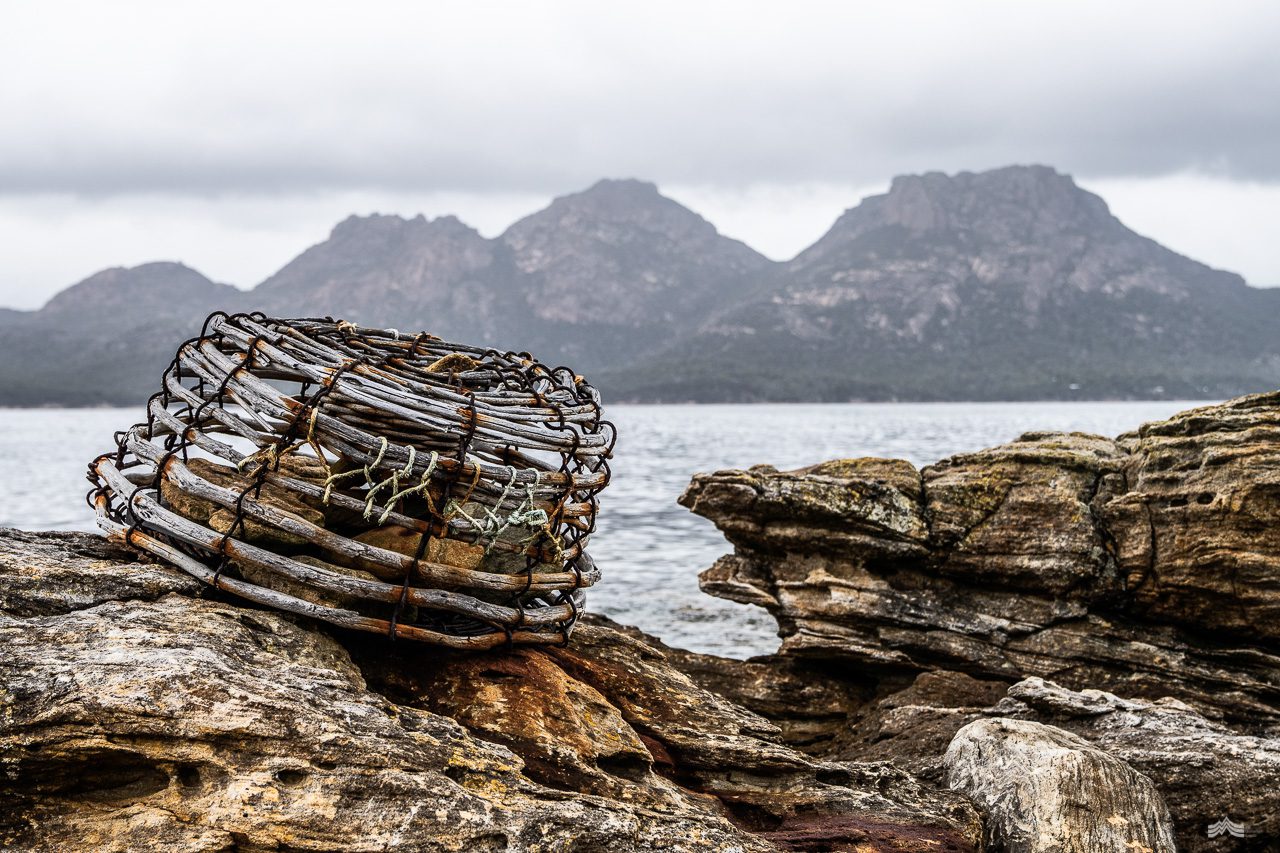 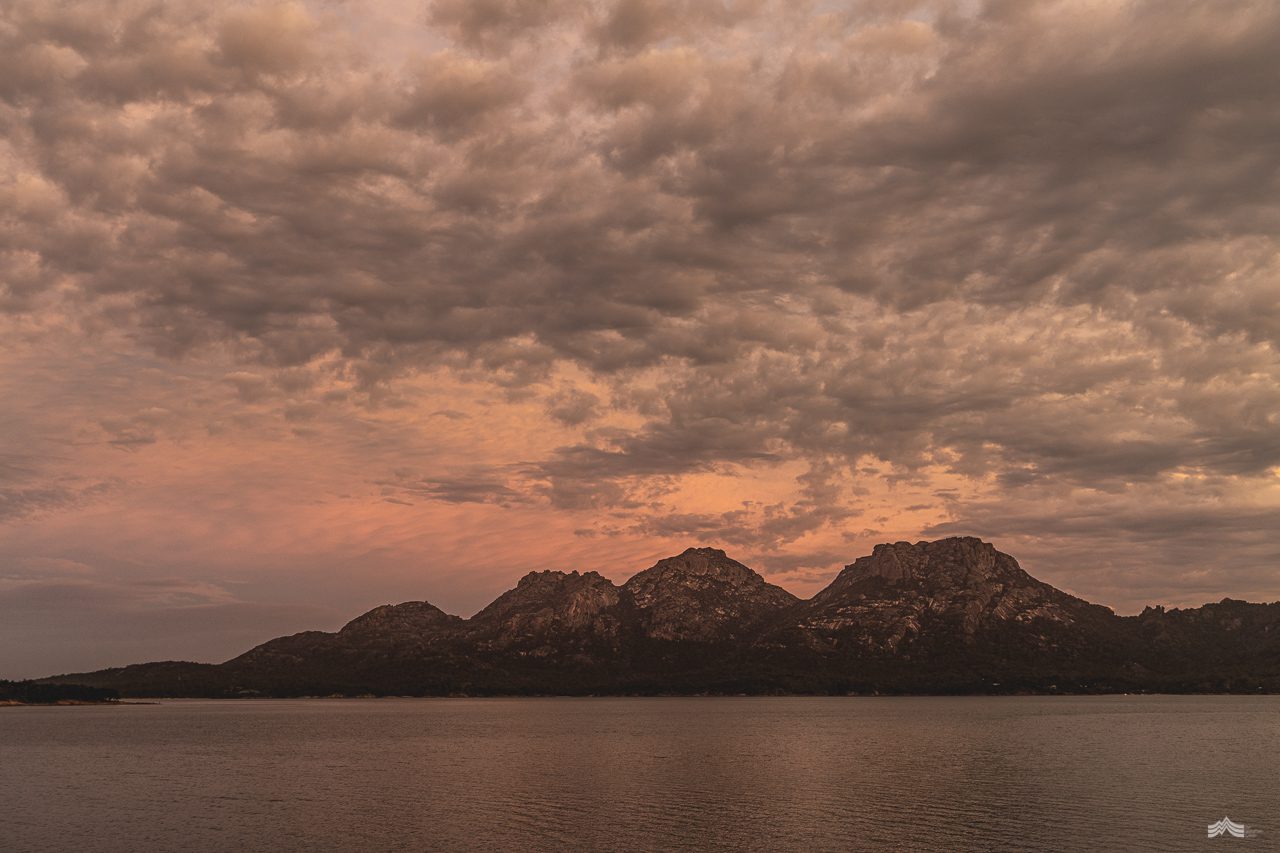 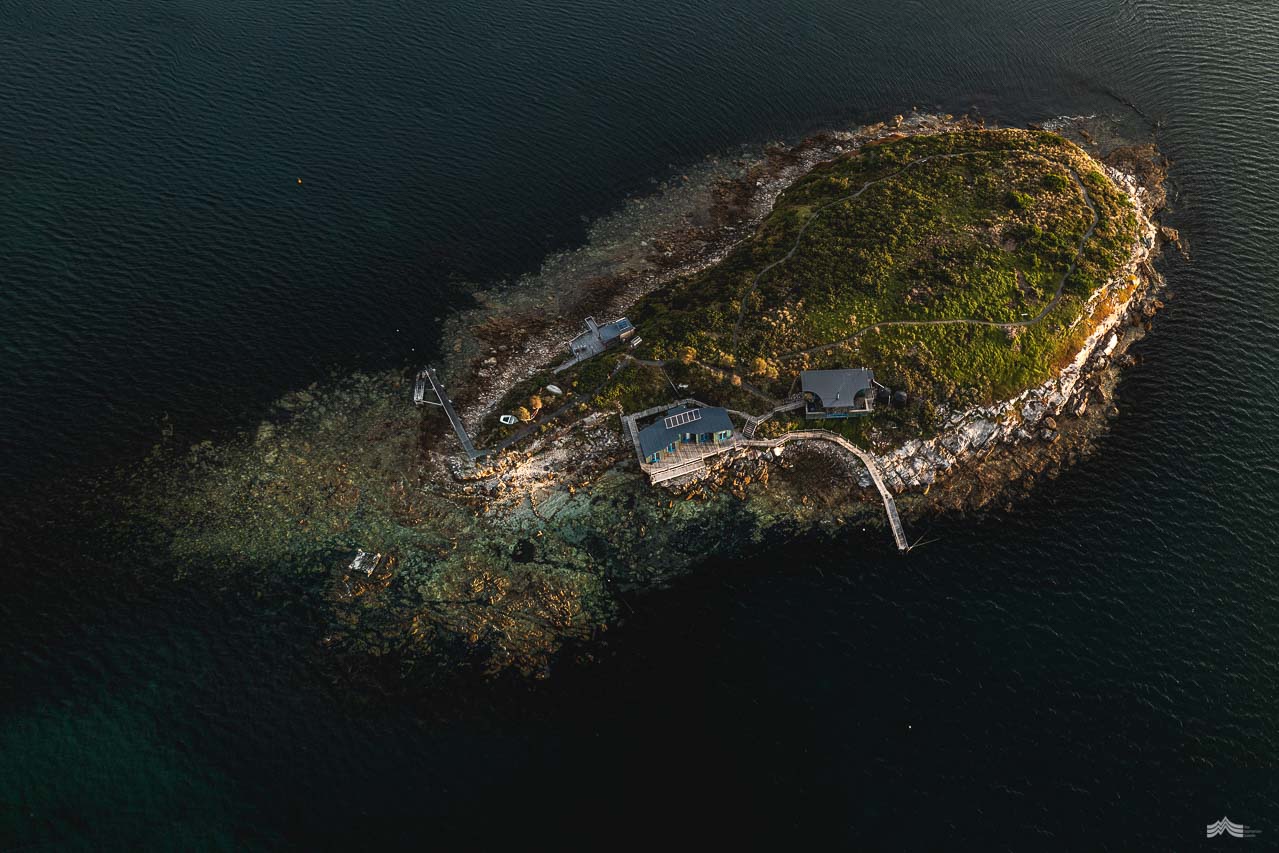 It is said that Hepburn’s arch nemesis, fellow whaler and sealer George Meredith, would send his convicts out to the island under the cover of darkness to steal Hepburn’s sandstone. Local legend has it that Hepburn caught wind of the fact Meredith’s men were mining his sandstone and patiently waited until they had almost finished. He then caught them in the act, kicked them off the island, and proceeded to use the sandstone they had so industriously quarried to complete his nearby homestead across the bay at Swanwick. The very last of the convict-quarried sandstone blocks remains on Picnic Island. It takes pride of place under the fireplace in the main pavilion and serves as a reminder of colonial tales that washed against the island’s shores almost 200 years ago. Be sure to close your eyes and run your fingers over the deep tool marks that pattern its neatly carved faces. 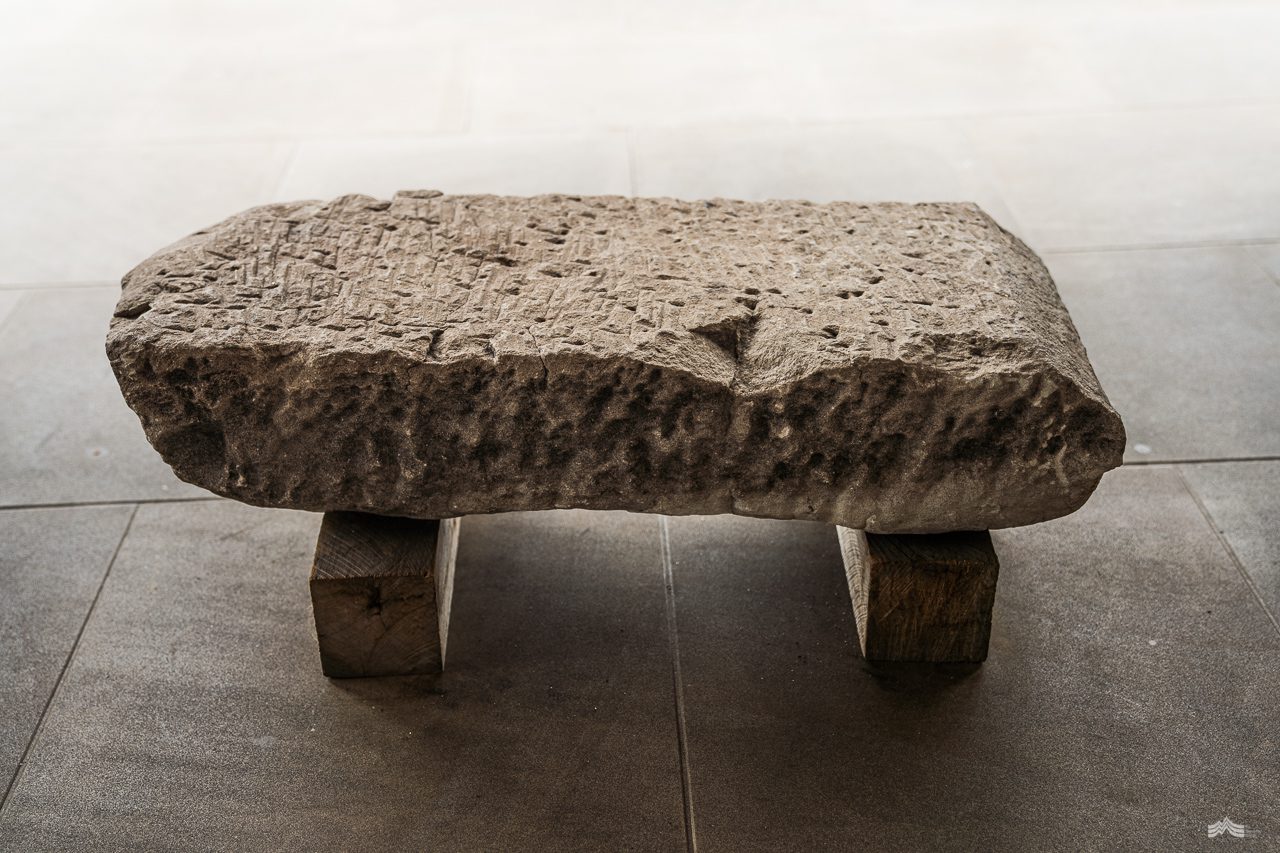 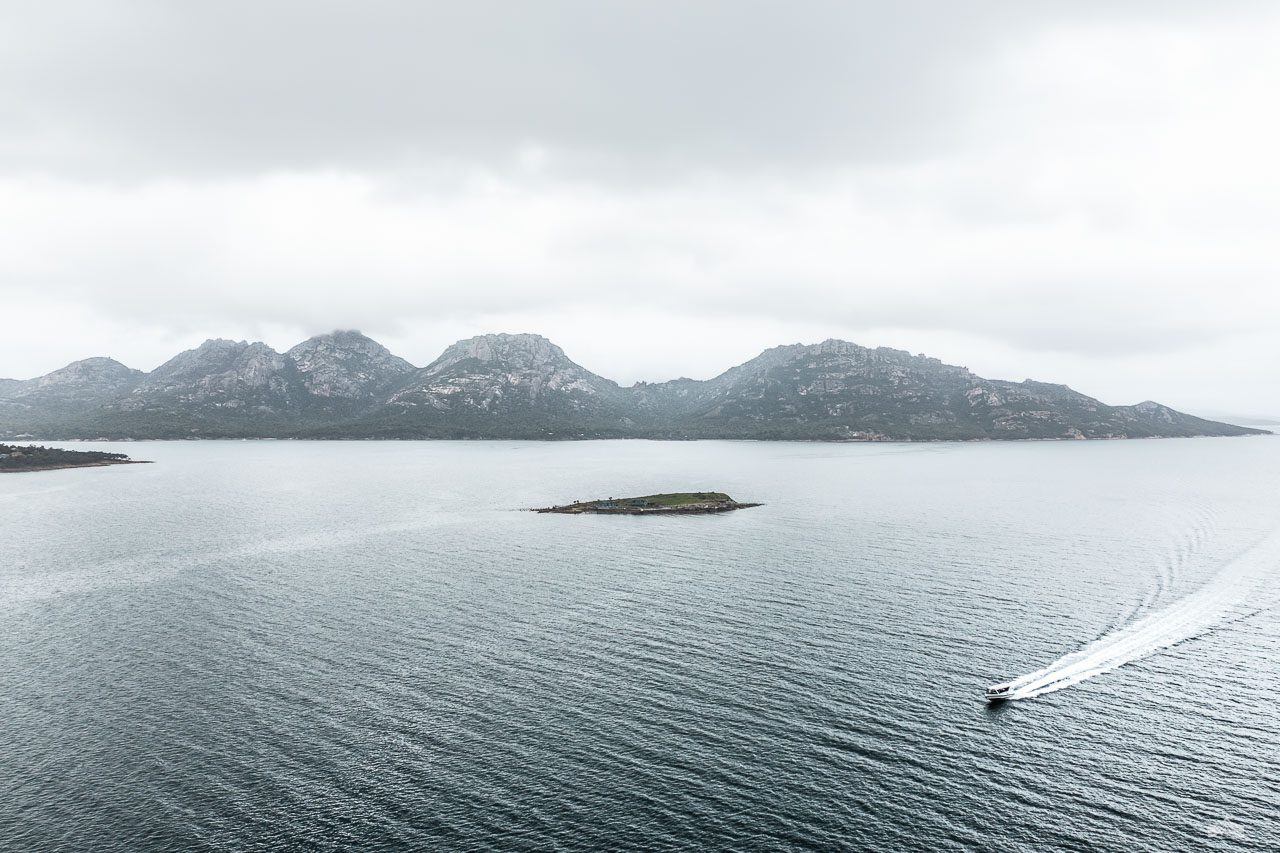 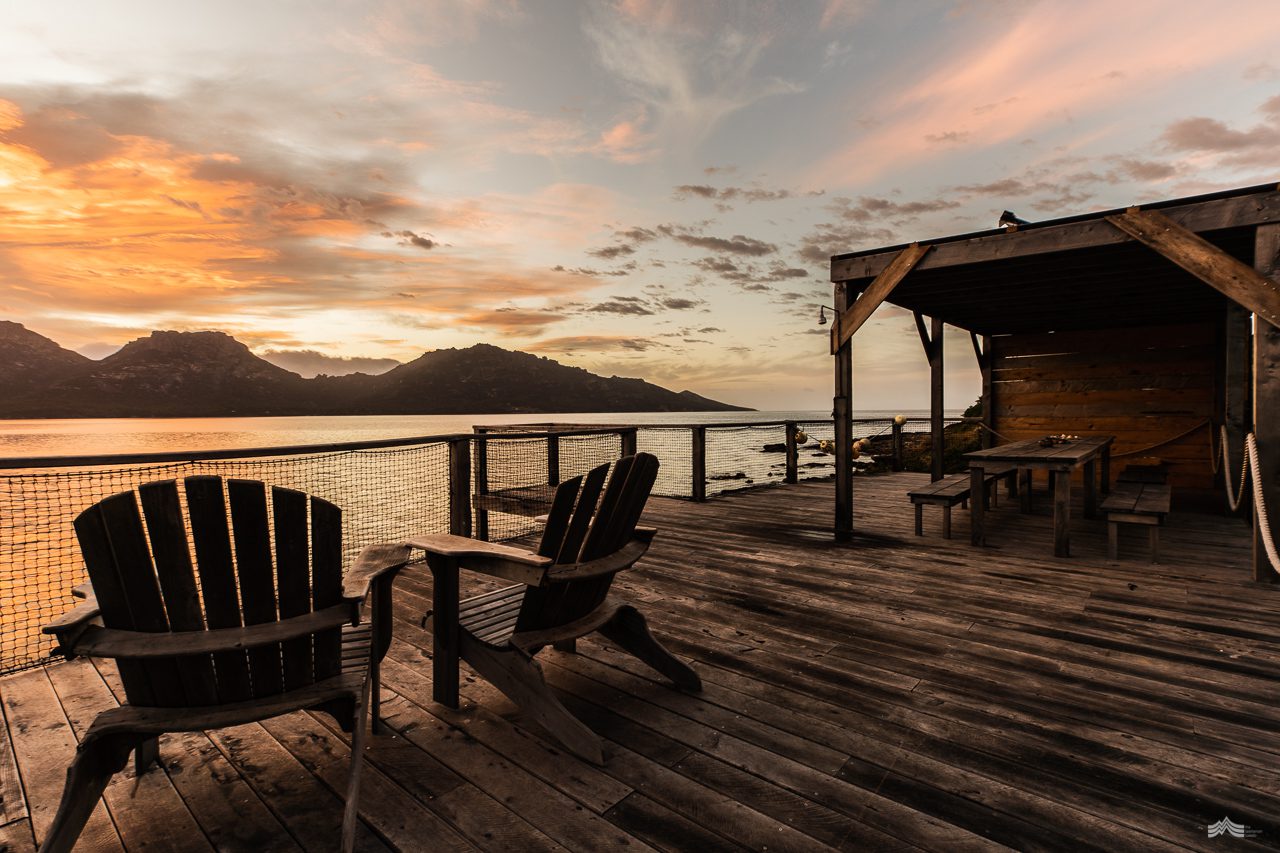 Oh the front row seat to the most breathtaking sunsets over the Hazards! This spectacular string of granitic monoliths rarely disappoints and nor does the deck nestled on the north eastern face of the island. A mere thirty seconds walk from the main pavilion, this is the spot for glorious communal dinners with a million dollar view. Wrapped along the side of the island, it’s cleverly designed to provide shelter, comfortable seating for your entire party, and dress circle tickets to one of Australia’s most sought-after sunsets. It’s a dinner party location you’ll never forget. You can even jump under the outdoor shower if being salt-free is a must before that first glass of wine.

Picnic Island is the only place in the world where you are permitted to sleep within a seabird rookery. Come dusk, the island’s population swells as you’re quietly joined by dozens of tiny penguins. Whilst they’ll largely slip ashore unnoticed, waddling slowly towards their burrows, you’ll soon be aware of their presence. The guttural chatterings of the colony will lull you off to sleep – they do like a good conversation.

Five comfortable bedrooms await in a separate sleeping pavilion. Each boasts double glass doors, ocean frontage and is kitted out simply but tastefully. Under your feet, century old salvaged timber is an authentic nod to your distinctly maritime location. Morning high tides are a treat, inviting you to throw open the door and enjoy a refreshing early morning dip. The gulls drying their wings on the nearby platform will watch you inquisitively, hoping you’re trying to catch them breakfast. 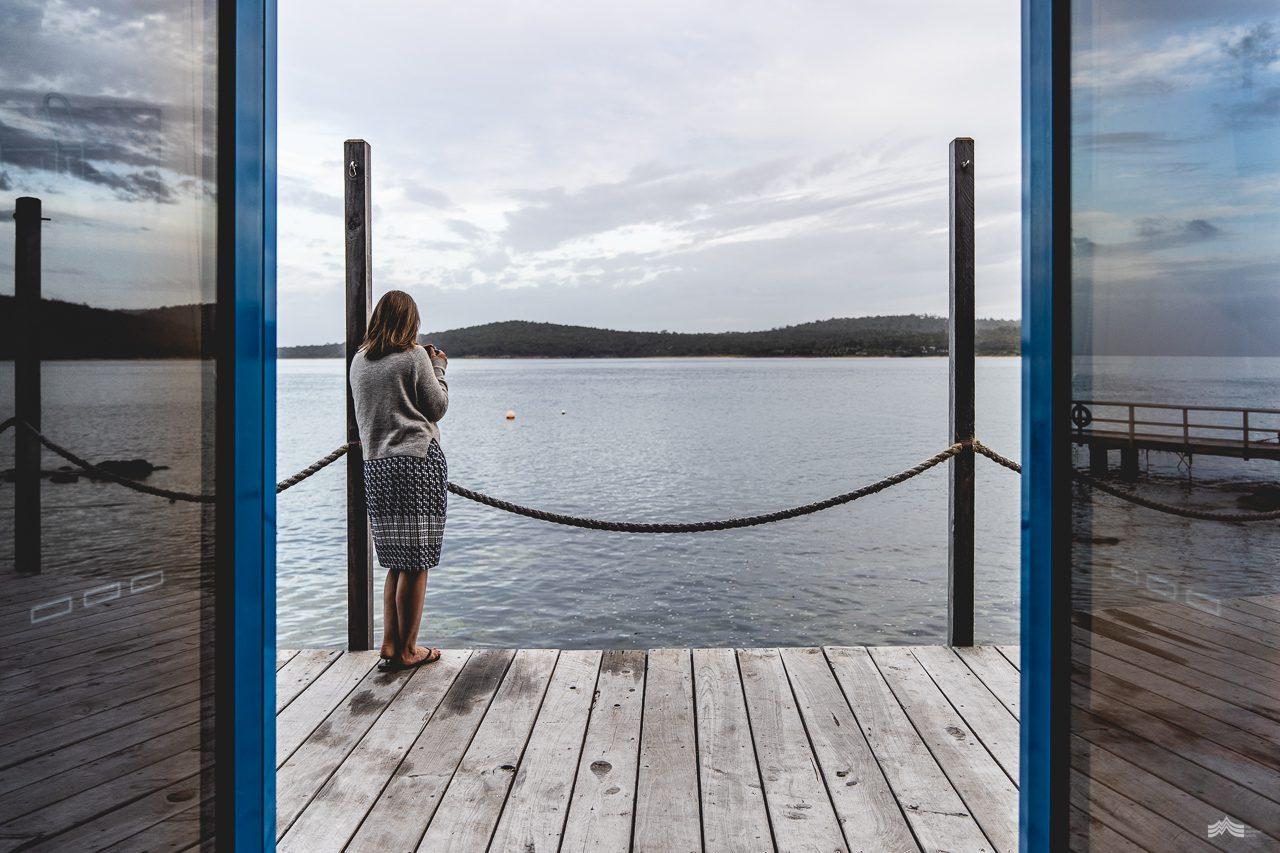 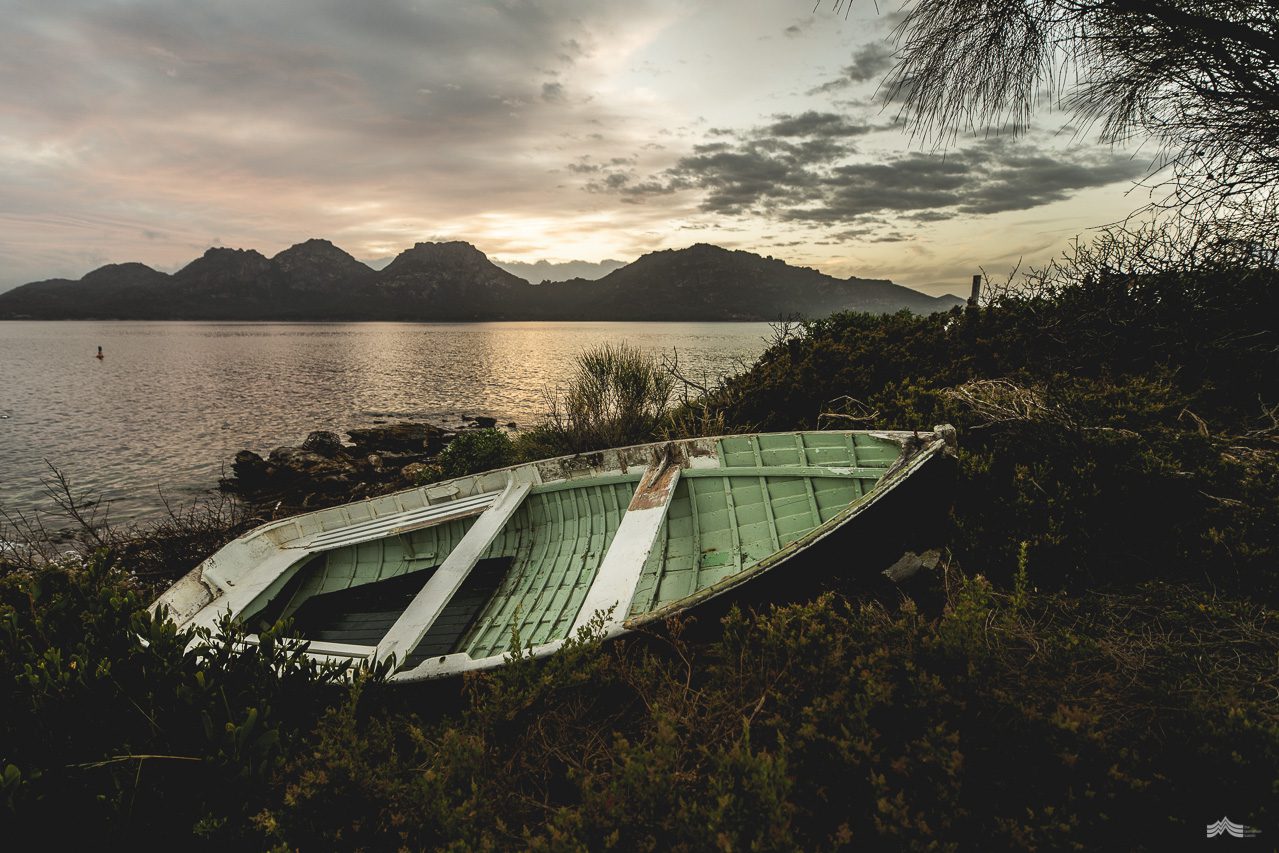 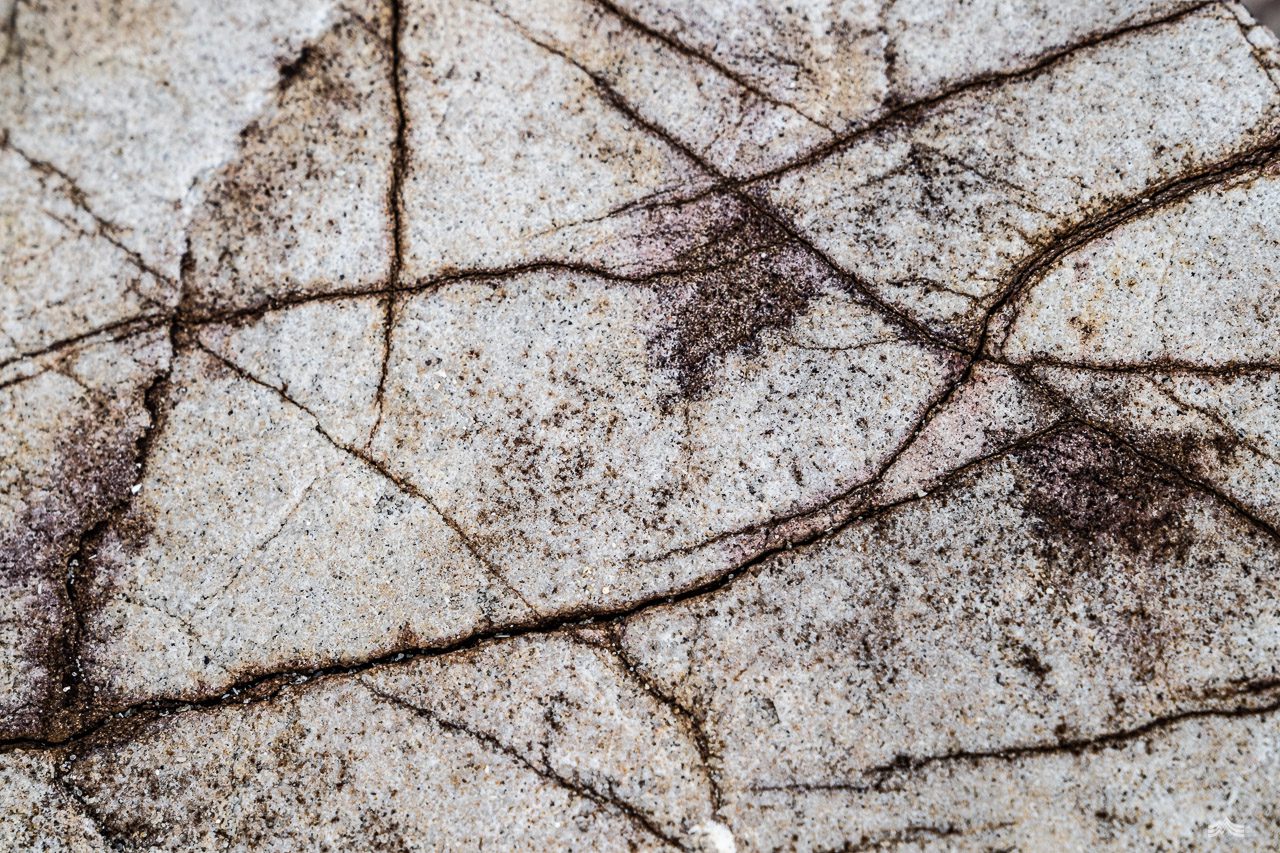 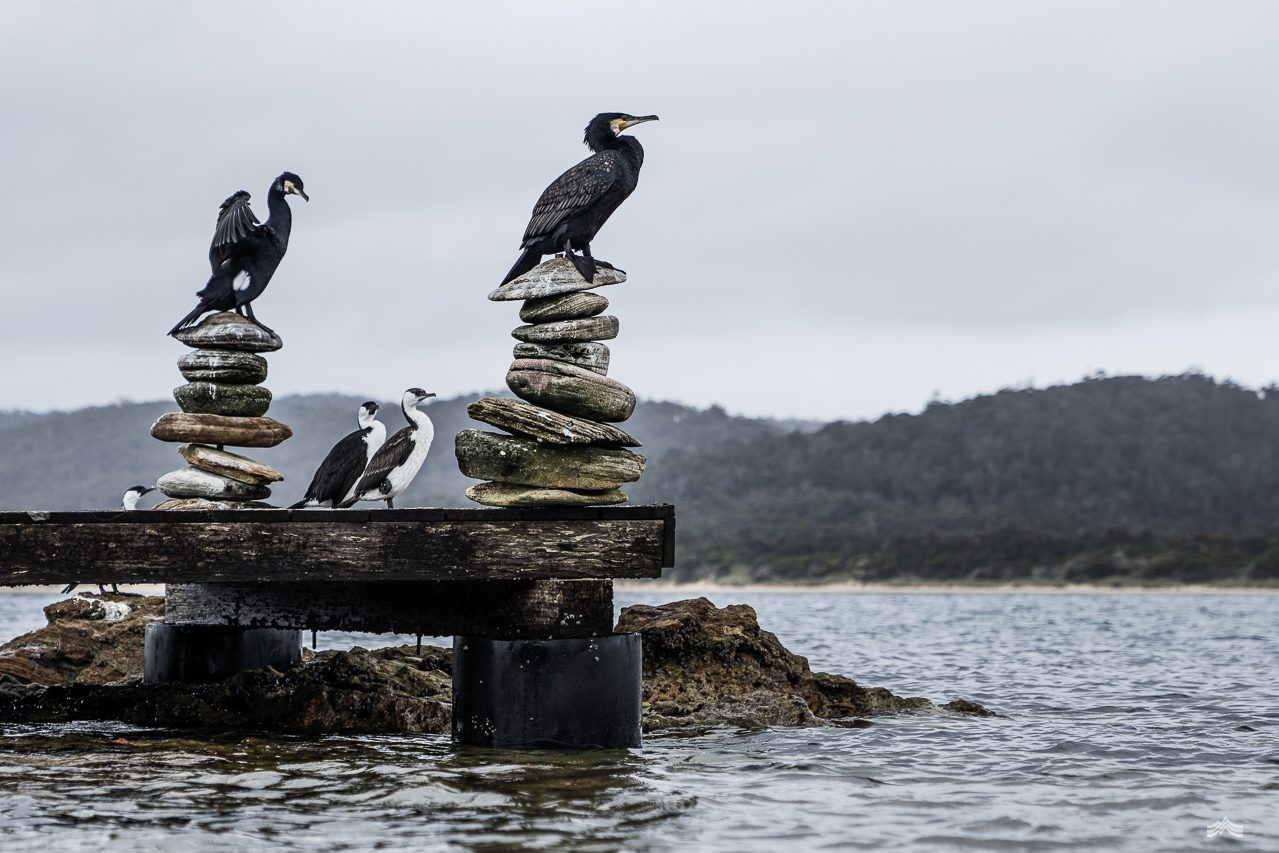 Time spent on Picnic Island is somewhat akin to being on a ship, not least because you’ll be endlessly soaking in the weathered softness of silvery macrocarpa underfoot – the decking is divine. Surrounded by the cool cobalt tones of the Tasman Sea, one’s troubles are easily cast adrift. Time becomes measured by the changing light of the day and a swathe of delightful decisions. There’s time spent being lulled to sleep in the hammock. Satisfying childlike curiosity by exploring the rockpools. Idling away an hour on the deck buried in a good book. And the low-tide island circumnavigation to find Hepburn’s hidden treasure chest within a sea cave on the shoreline.

A wander along the summit pathway rewards not only with the chance to stretch ones legs, but to revel in the everchanging aspect. Picnic Island delivers a 360 degree take on the mood of the peninsula. Gently circling the summit, the track is interspersed with a few thoughtfully placed logs just to sit and ponder your surrounds. The vegetation is low and dense – wickedly shaved by the winds – so you’ll enjoy sumptuous uninterrupted views. Watch a fishing boat round the point and head into port, or stare at a sea eagle as she heads silently towards the Hazards. Shearwaters swoop before you as dusk approaches, likely laughing to themselves as they cause you to gasp.

The Tassie shack tradition continues to be closely guarded by the locals. For generations, local families have spent their summer holidays holed up in humble retreats by the coast. Whilst not fancy abodes by any means, at their very heart lies a warm welcome. They are places to switch off, unwind and just be. On Picnic Island you’ll discover the very essence of a quintessential Tasmanian holiday – a wild heart and an understated soul.

In the words of owner Clem Newton-Brown, “There’s something really special about being marooned out here. It’s wild and beautiful and changes your perspective on the world. Our family really wanted to share this incredible experience.”

Picnic Island is a rare modern take on the timeless Tasmanian shack tradition. Grab a night or two here if you can. 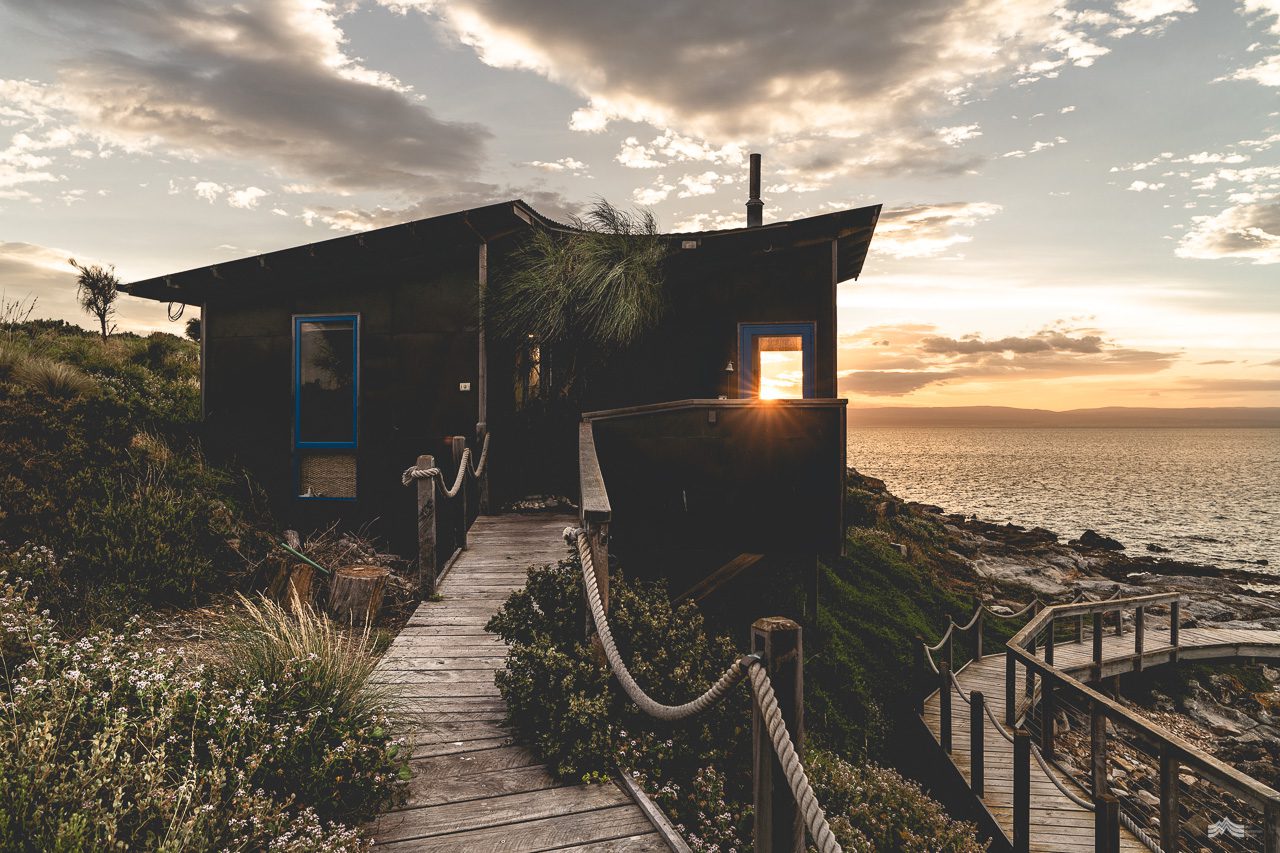 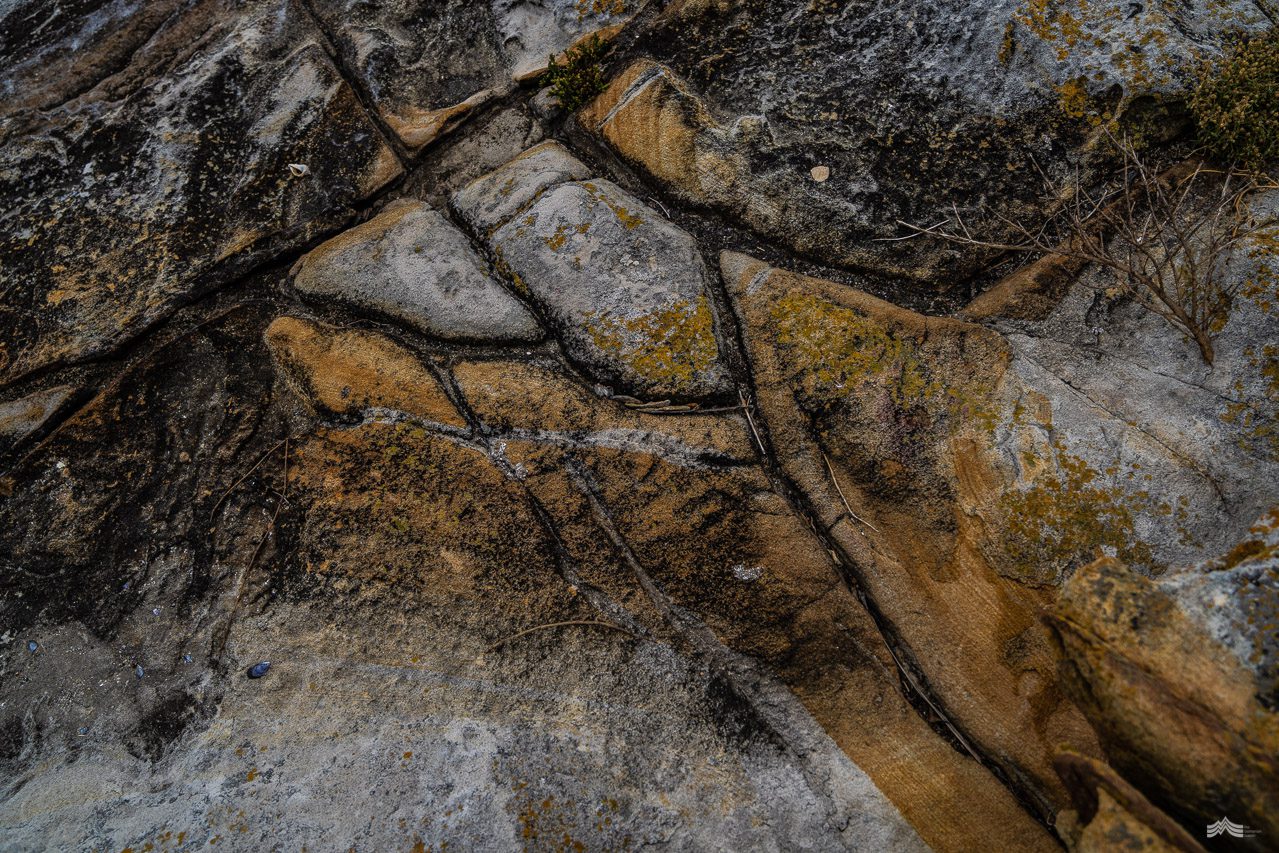 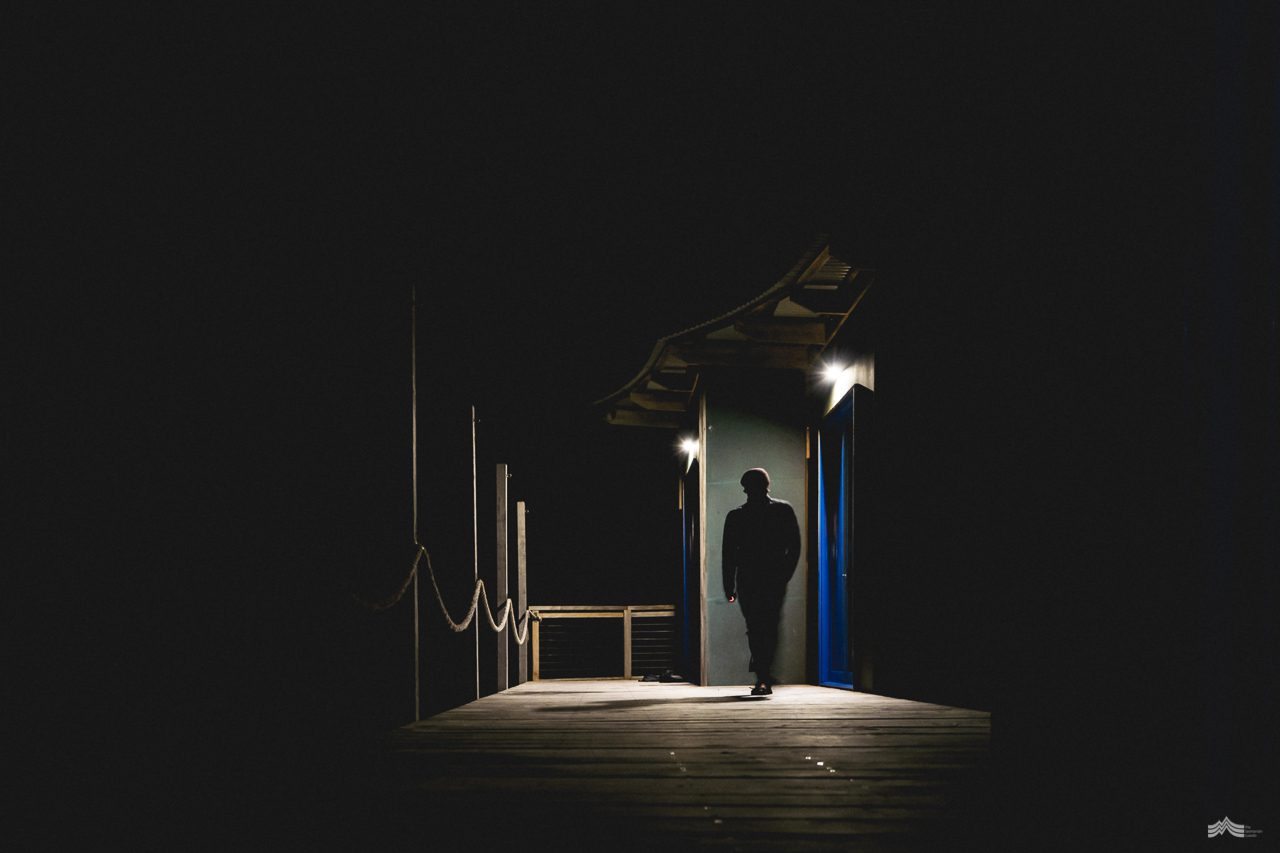 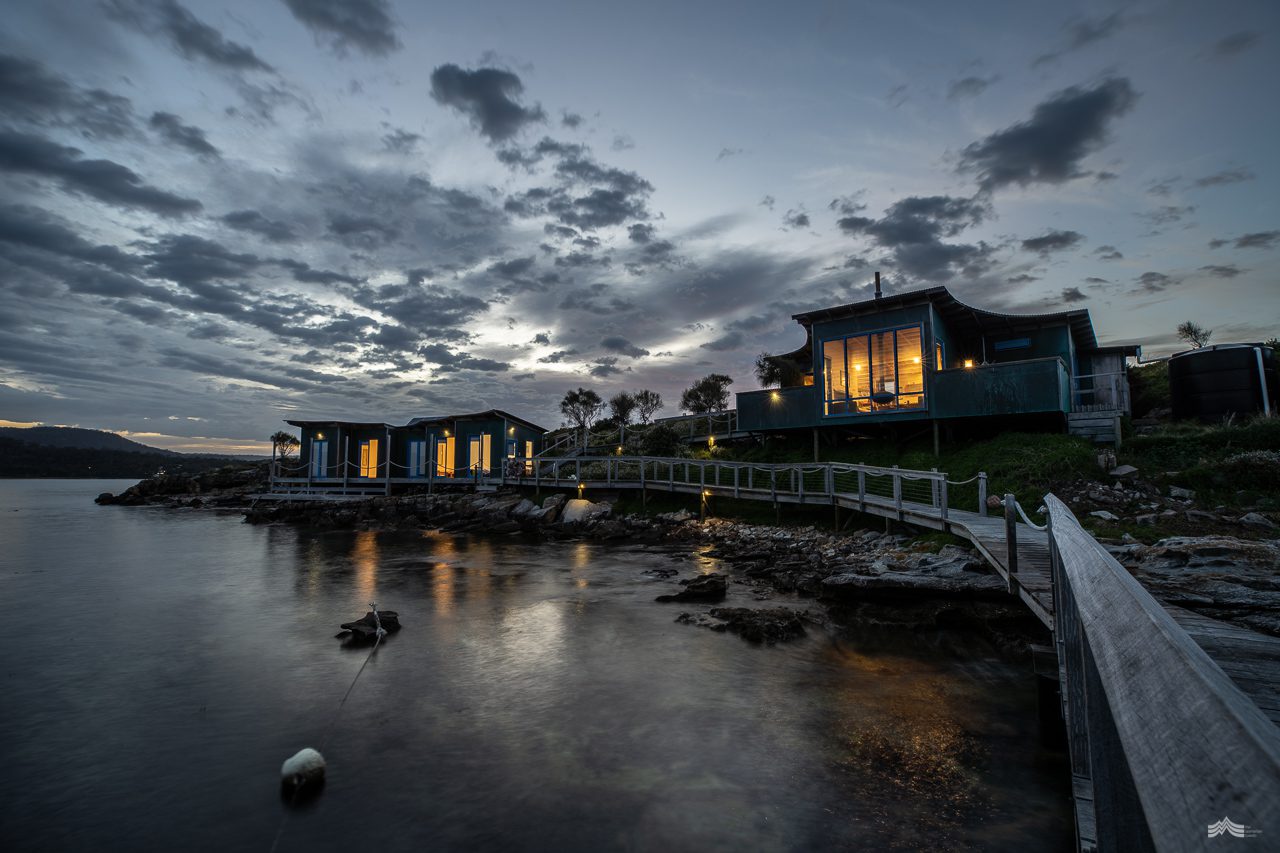 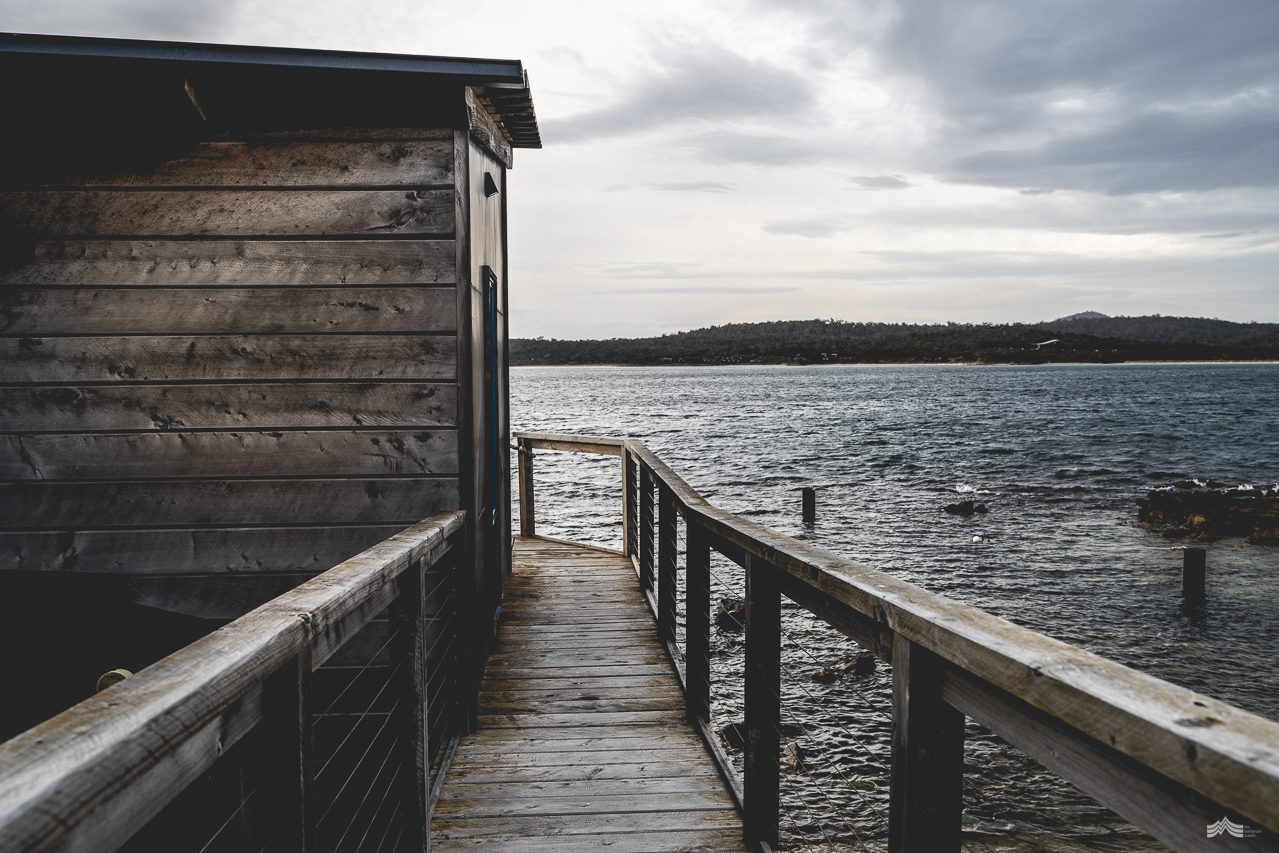 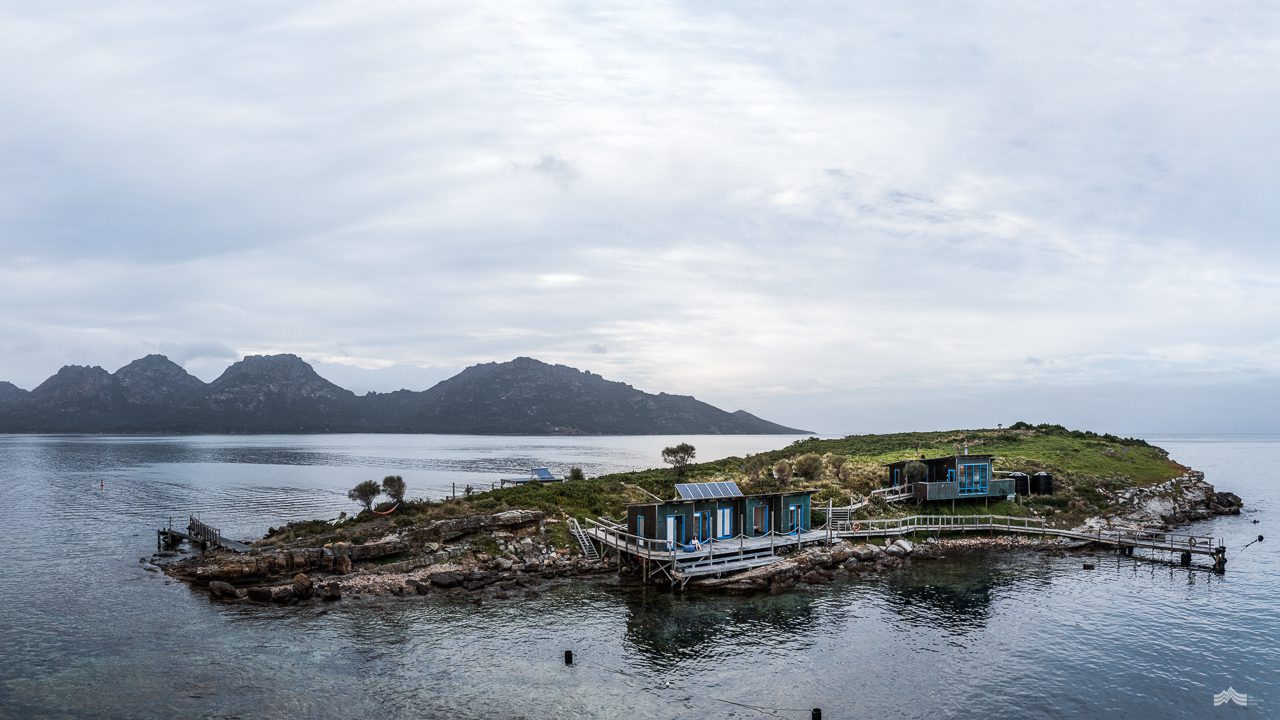