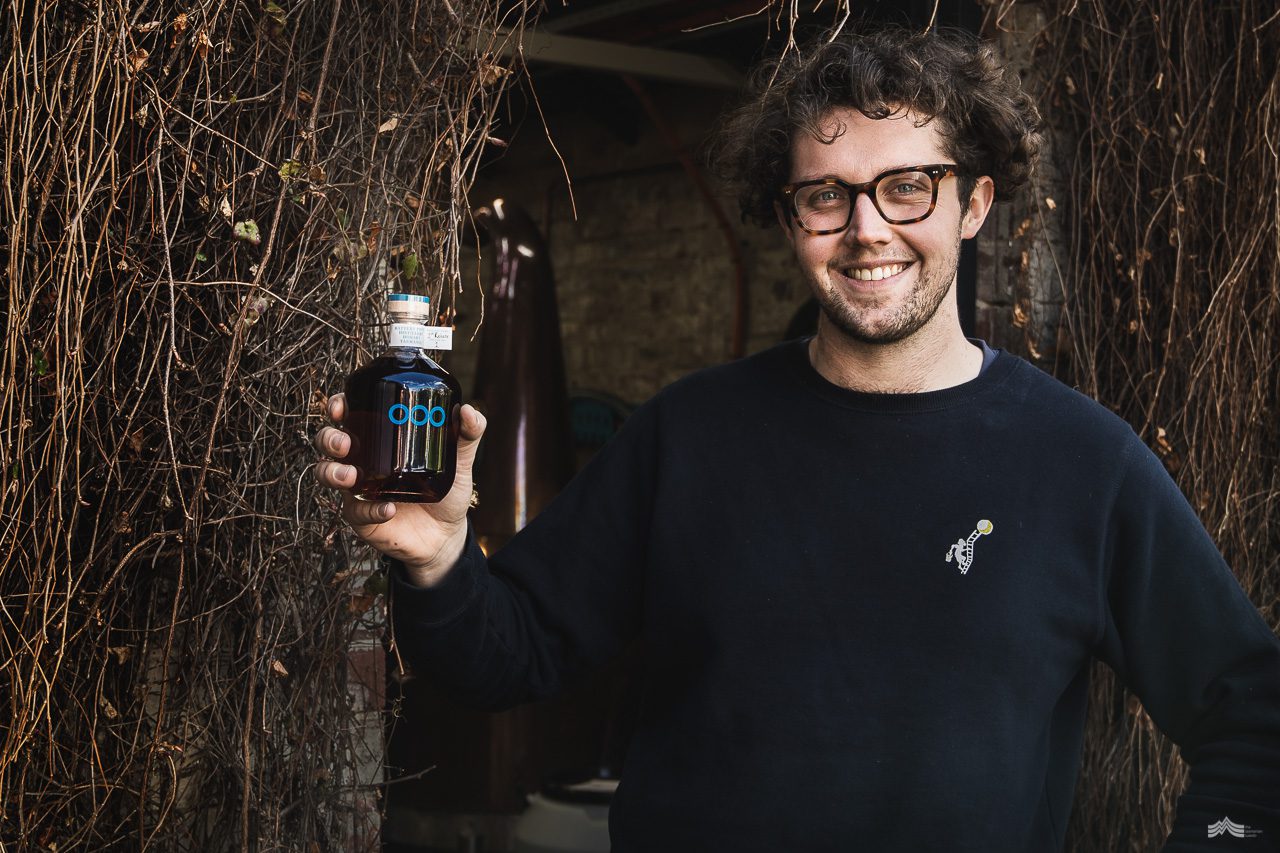 It’s humble to say the least, a small shed tucked away quietly between some of Hobart’s most prestigious homes. A vine clings to the ageing stonework, valiant in its efforts to camouflage the entrance. An almost hidden doorway to another world.

This latest addition to Tasmania’s burgeoning whisky scene represents the very best of what Tasmanian spirits are known for – small batch, hand-crafted quality spirits. The distillery itself is a simple space, accommodating a modest locally-built still sitting close to its offspring – a neat collection of 60 litre barrels. There are no towering ceilings nor flashy signage. Just an ageing timber desk in one corner where head distiller Jack Lark can record his notes and ponder the perfect marriage for his next creation. 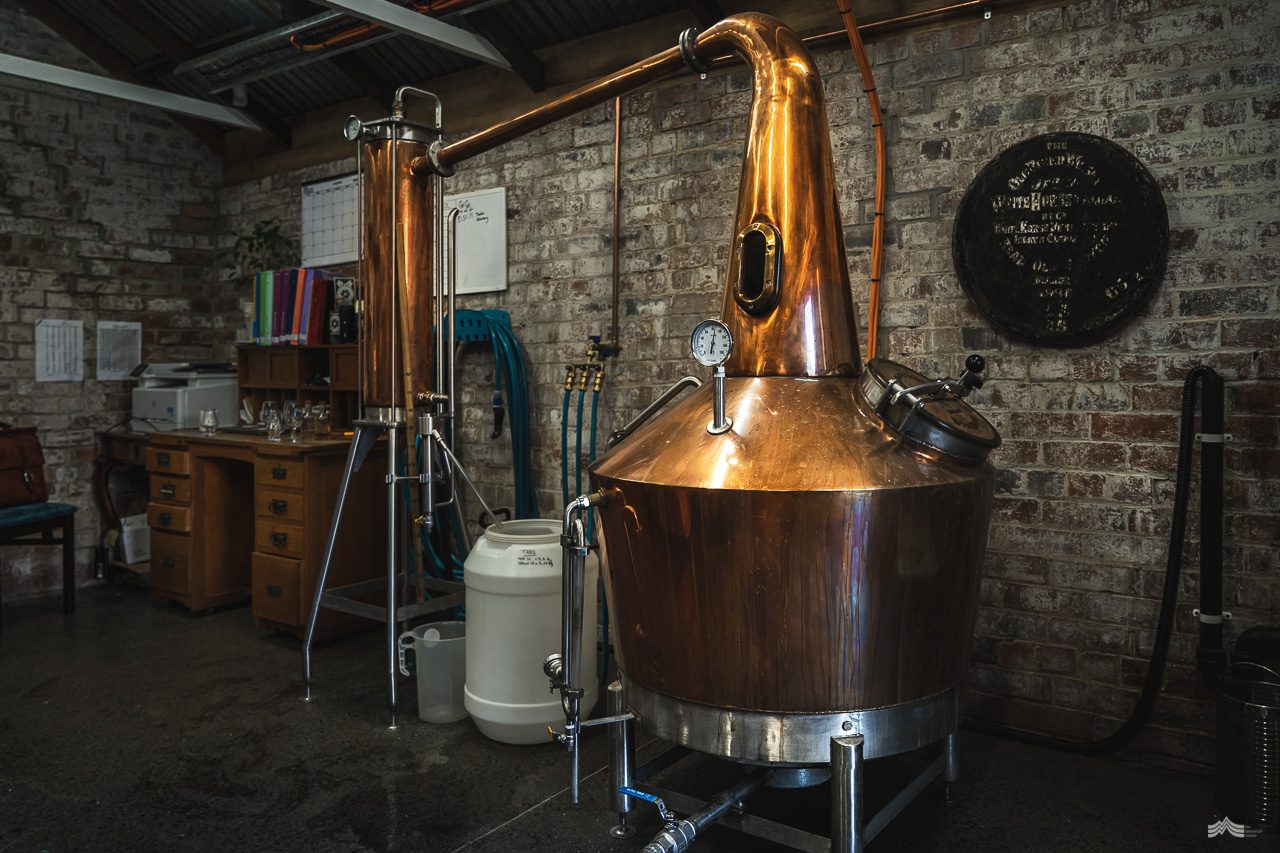 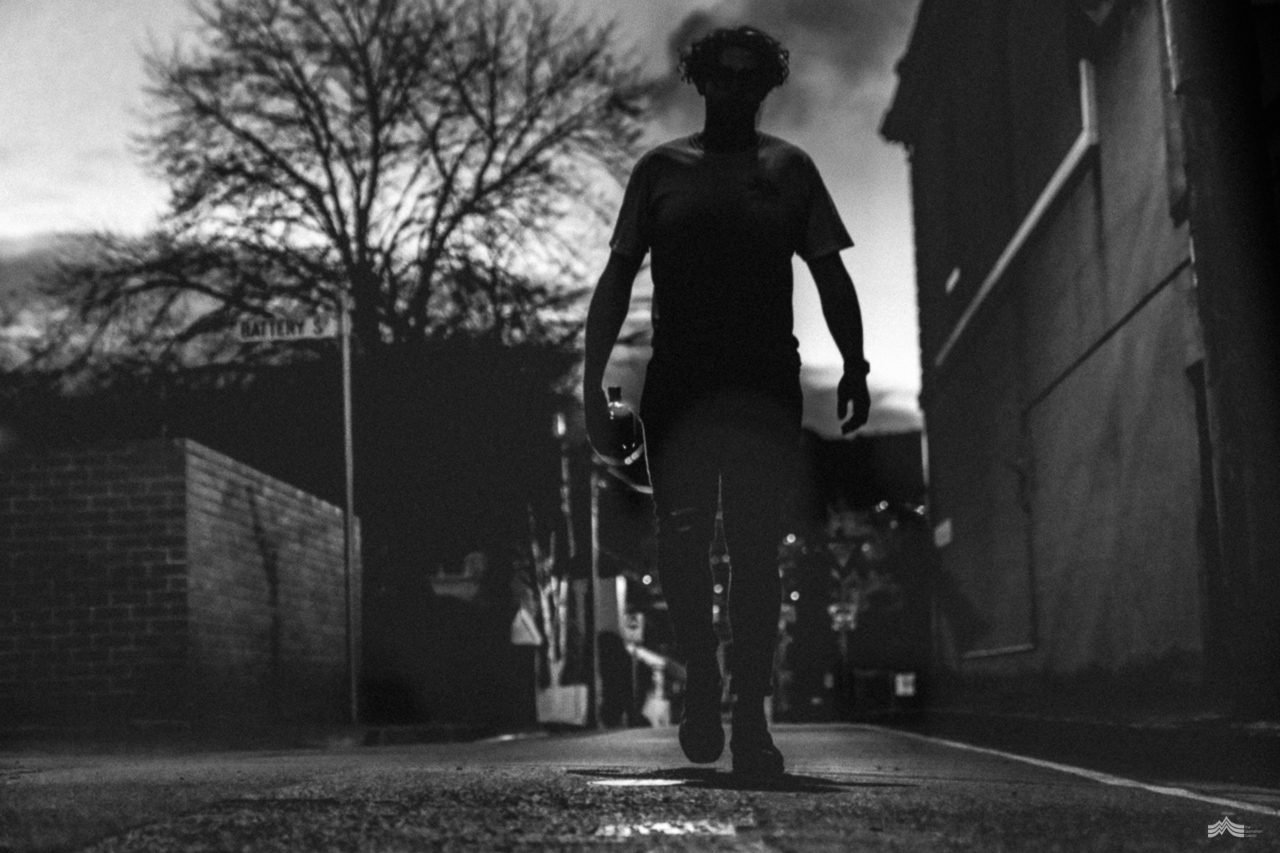 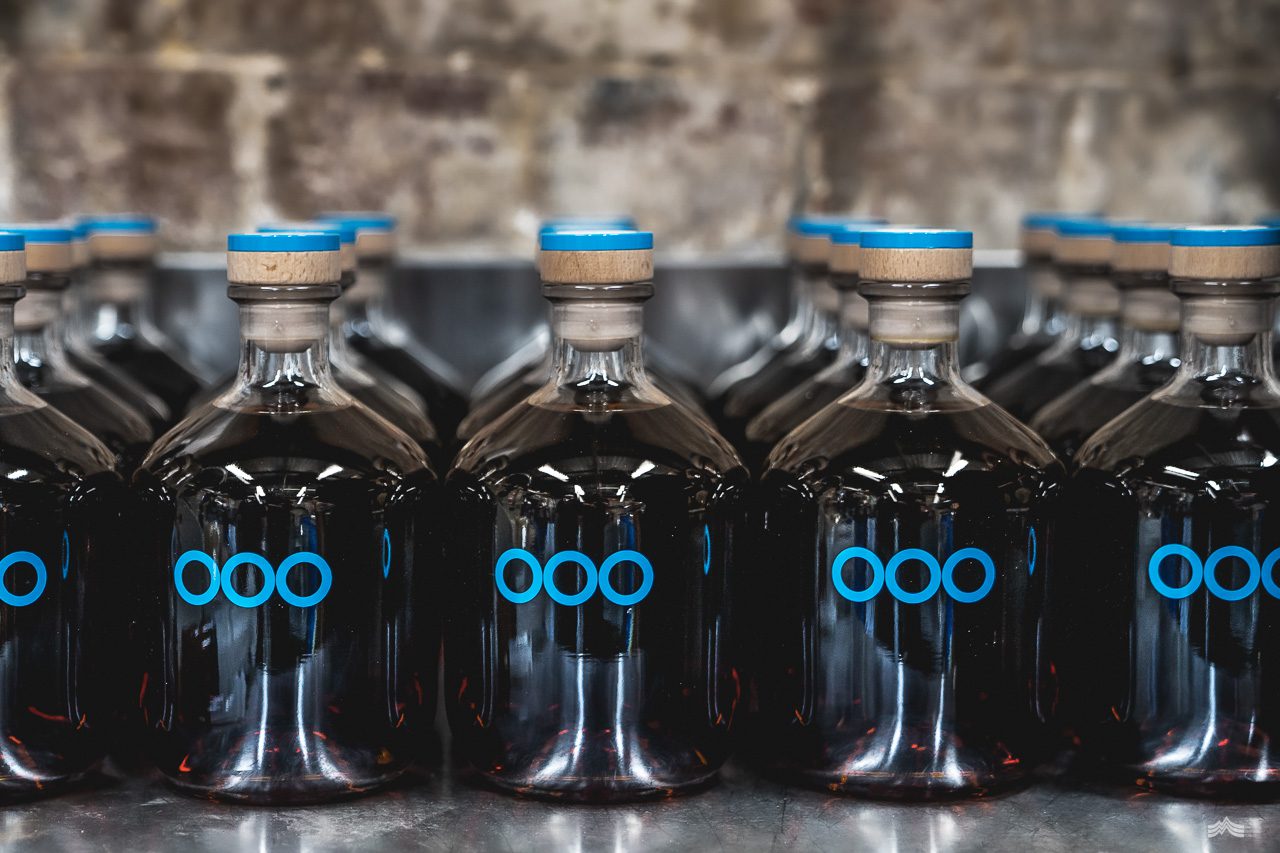 Jack is one half of the Battery Point Distillery story. With whisky pedigree that cannot be ignored – he’s the son of industry legend Bill Lark – Jack brings not only youth and enthusiasm, but 20 years of watching his parents perfect their craft. “In terms of whisky, I was raised by two walking encyclopaedias,” laughs Jack. “I spent my childhood helping with the bottling, so I guess it’s always been a huge part of my life. I think I might have initially gone into distilling as a means to an end, but I’ve now come to realise that I really love the creative side of distilling and the way in which it’s a craft that brings people together.”

Lloyd Clark is the other member of this unusual pairing. A stalwart of the Tasmanian tourism industry who has been the custodian of the renowned luxury hotel Lenna for close to 40 years. “Jan mentioned a while back that she thought a hobby would be good for me,” laughs Lloyd, referring to his wife and long-time business partner. “I was fishing up the lakes one time with some mates, Bill Lark included actually, and we got chatting. I’ve never been much of a whisky drinker, but I wondered aloud how hard it would be to source, install and commission a still in order to commence distilling at Lenna. Bill assured me it would be pretty straightforward and the rest is very much history. Six months later we were up and running,” explains Lloyd, grinning. “I don’t think it’s quite the hobby Jan had in mind, but it’s turned out to be really rewarding.” 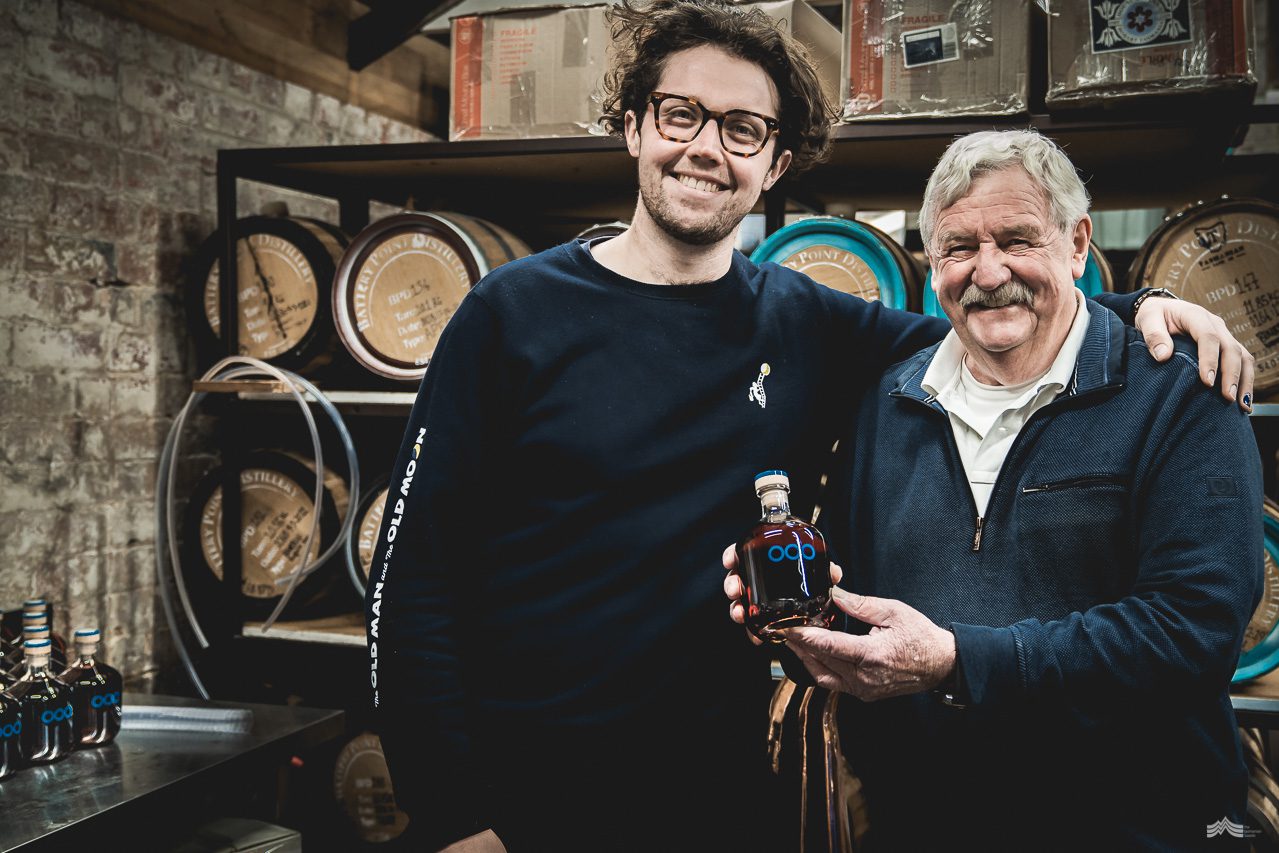 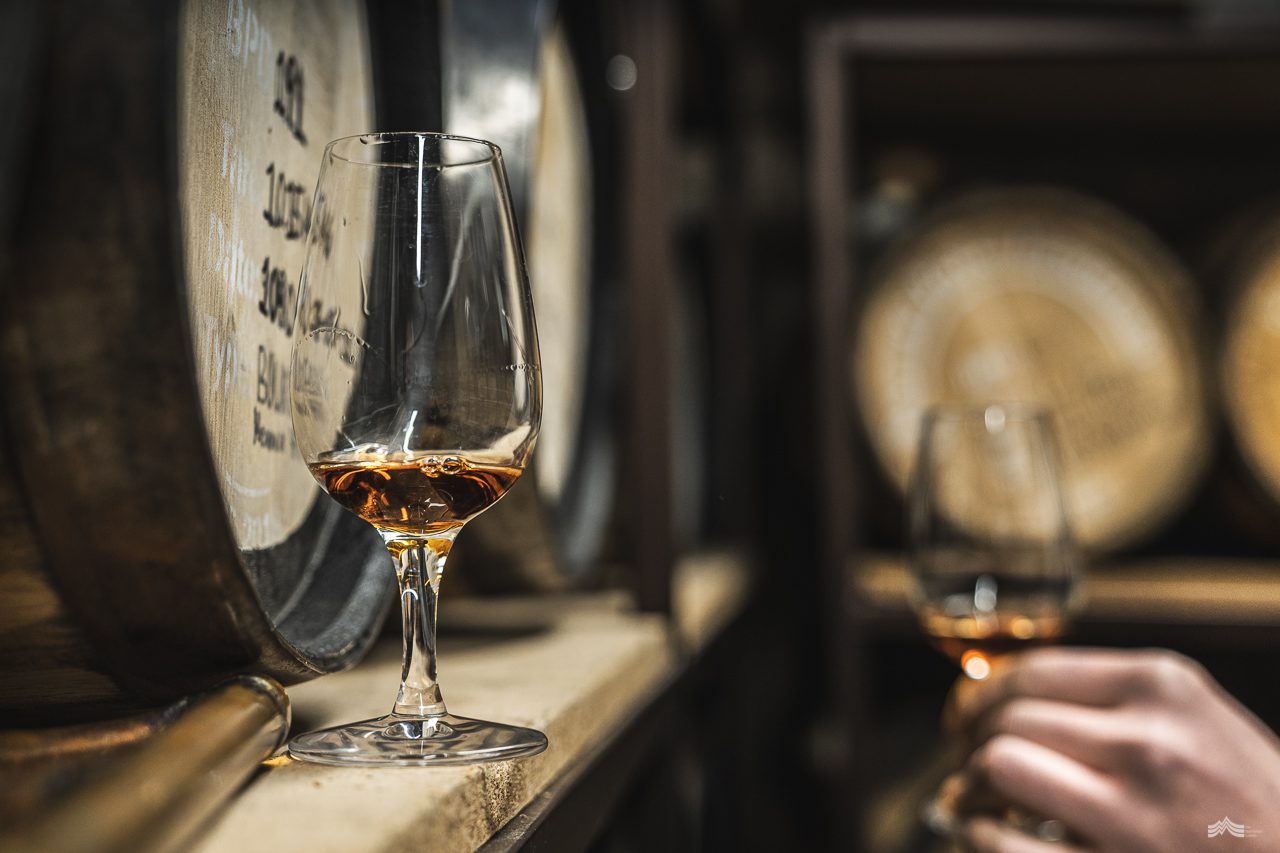 And so Battery Point Distillery found its home at Lenna. The grandiose mansion built by seafaring merchant Alexander McGregor has overlooked Hobarts docks for close to 150 years, standing as a reminder of the flurry of whaling, trading and shipbuilding wealth that swirled around Hobart in the mid 1800s. At one point the McGregor’s laid claim to the largest individually owned fleet south of the equator.

Jack picks up the story, “I’d spent over two years working out of town at the Old Kempton Distillery by that point. I was learning a lot about whisky distillation, but I must admit the drive was a bit of a pain.” He adds with a cheeky quip, “You know how Tasmanians hate travelling too far from home…”

“This position arose and I was immediately interested in the idea of being with a distillery from day one, and being able to put a stamp on the development of its particular flavour profile,” continues Jack. “Lloyd and I had a good chat about what we were aiming for and I knew it was something I could turn my skills to. I saw it as an opportunity to create something pretty special.”

“Whilst the whisky was underway, we turned our attention to making a gin that would specifically complement Lenna,” says Jack. “I approached Mum to help teach me how to make gin, and she happily accepted the task. We worked together on the experience of distilling botanicals and blending them together. It was a special experience and I’ll always be quite fond of that time that I spent with Mum,” he nods. “We were aiming for a classic dry gin that could be enjoyed on its own or blended into a cocktail or martini. It’s complex but not too complicated.” 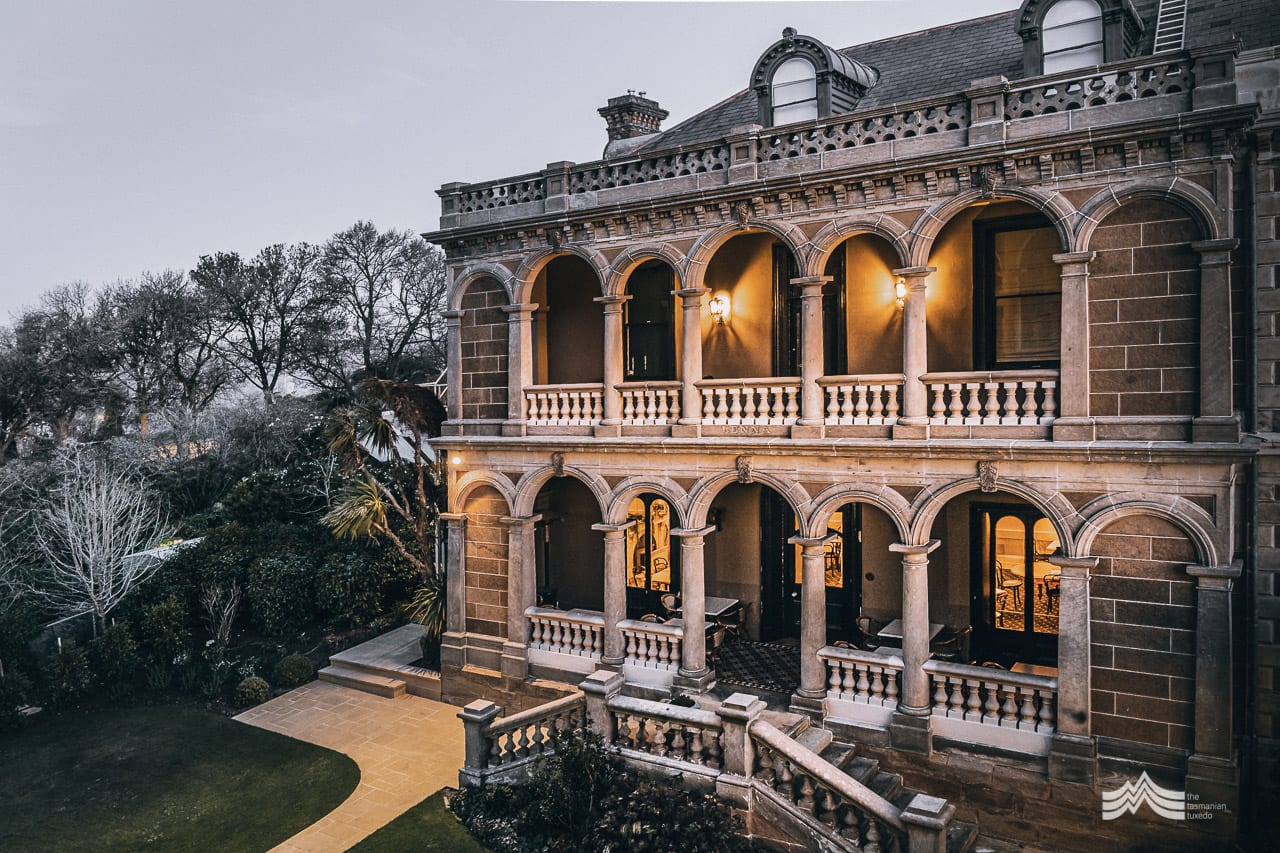 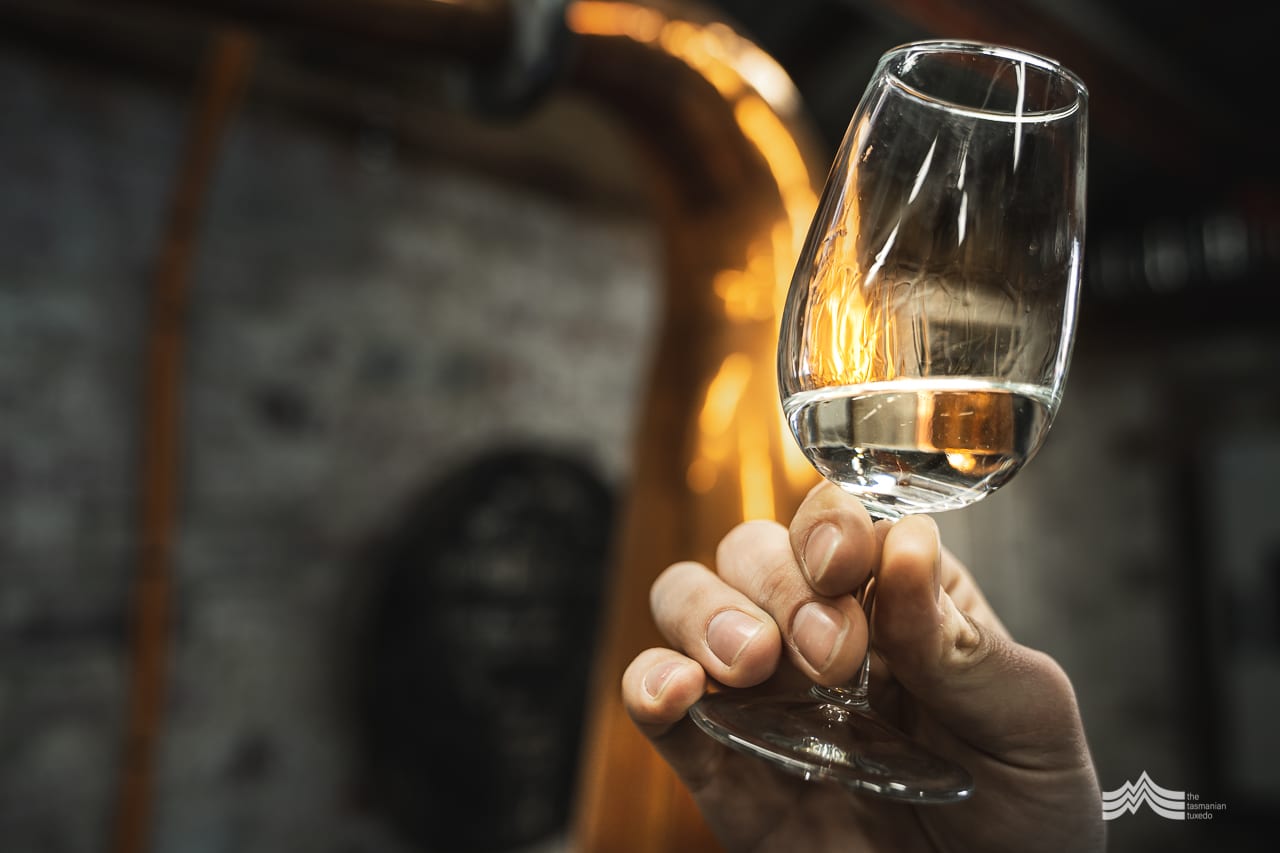 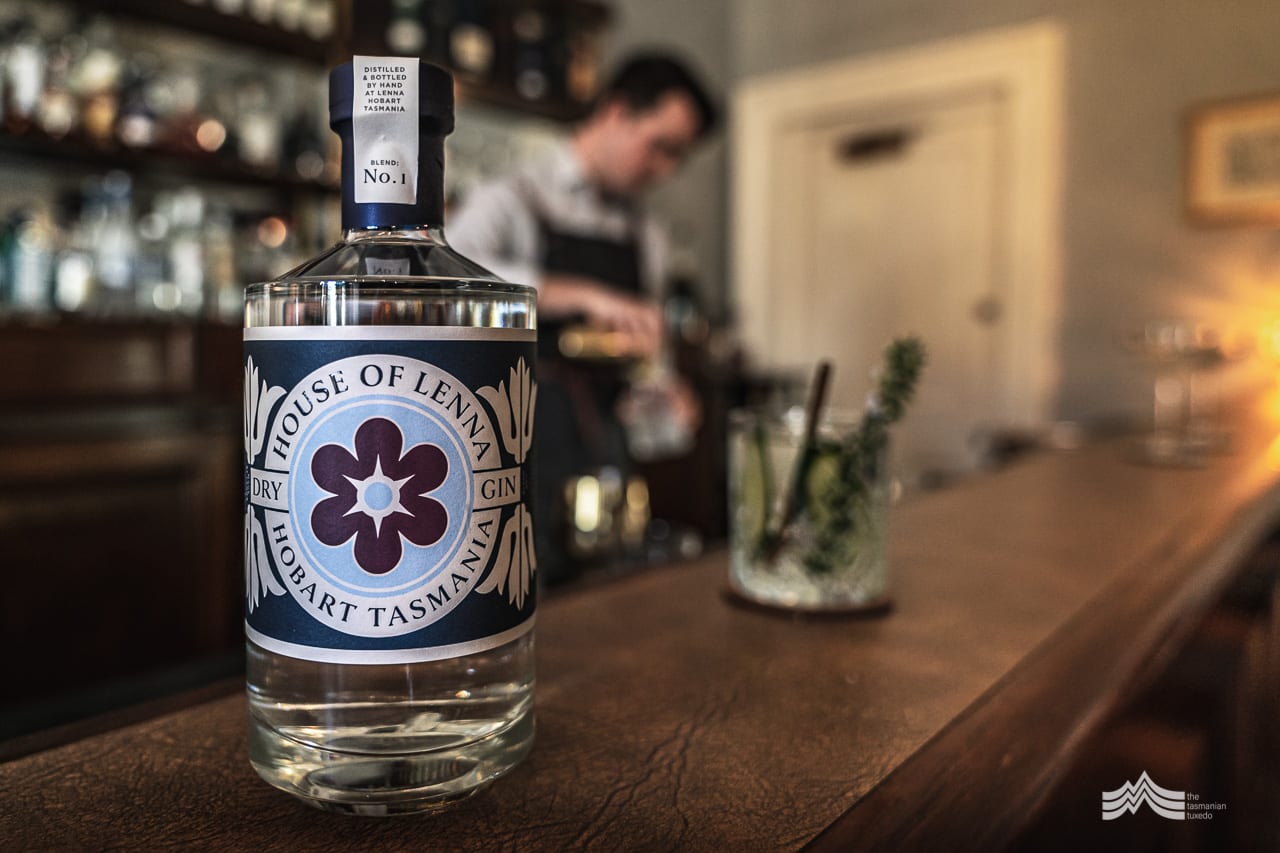 House of Lenna gin quickly won favour for its herbaceous nose and luscious palate. “It’s hard to beat sitting in the Chandelier Bar here at Lenna with a glass in hand,” smiles Lloyd, relaxing in front of the roaring fire. “It’s been warmly welcomed by our guests who love hearing that we make it here on site. If they’re on the ball, they’ll notice the label on our gin is designed around the tiles on the terrace that date right back to Alexander McGregor’s time. We’ve celebrated that very same pattern on our label to purposefully pay homage to Lenna’s rich heritage.”

To be fair however, Jack and Lloyd’s hearts both lie with the whisky. These down to earth characters are quick to explain their vision for Battery Point Distillery. “We wanted to achieve a Tasmanian whisky that had its own identity, but wasn’t too out there,” explains Jack. “I’m really pleased with the result of this first release. At the heart of our product sits the respected traditions of Scottish whisky distilling, a love of Tasmania and genuine commitment to small batches…and I really feel like it’s all come through in what we’ve created.”

A modest collection of glistening bottles have carefully been filled with the rich golden hues of Jack and Lloyd’s first release. Each is adorned with an understated and contemporary brand. “We really like the marriage of port, sherry and bourbon casks,” explains Jack. “And those three circles essentially represent upended whisky barrels. Three of them? One for each type.” 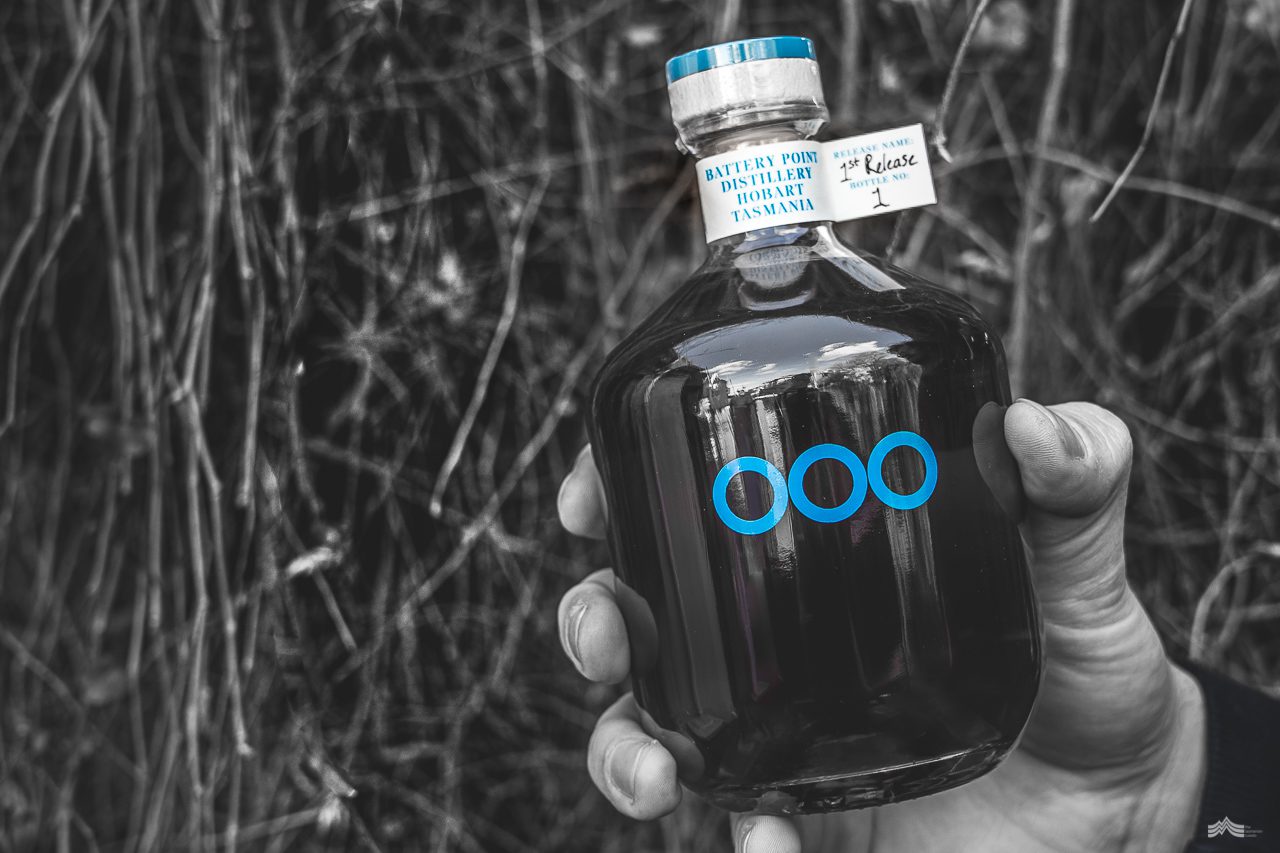 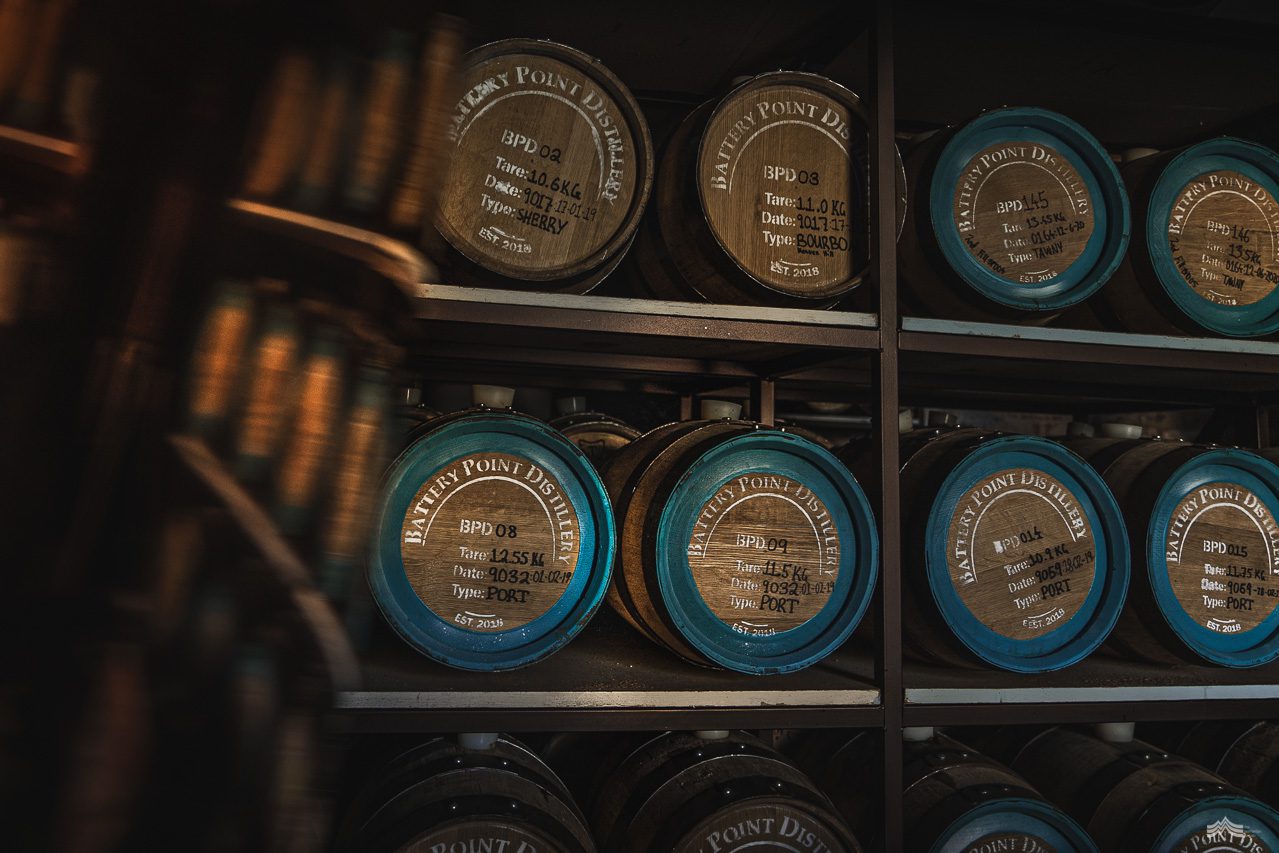 True to their word, Jack and Lloyd’s much anticipated first release is a rewarding blend of small port, sherry and bourbon cask whiskies. “It’s been aged in a Tasmanian apple brandy barrel for six months before being finished off in a muscatel cask,” explains Jack. “It’s sweet and full on the nose and I’m really pleased with the full palate. I love its dessert-like quality.”

The nose is sweet and full, with definite overtones of sultana and apple. On the palate, the whisky is rich, textural and full, resting in a spirit with a long lasting finish. A first release that is complex and interesting.

“Lloyd has let me take the reins in terms of the distilling,” explains Jack. “I’ve had lots of freedom to create and that’s made the whole process so enjoyable. I’m also really lucky that we share a commitment to quality and that this is a project not driven by money. A focus on the high quality ingredients that we have here in Tasmania, and the ability to invest the time required makes a big difference to the final product.” 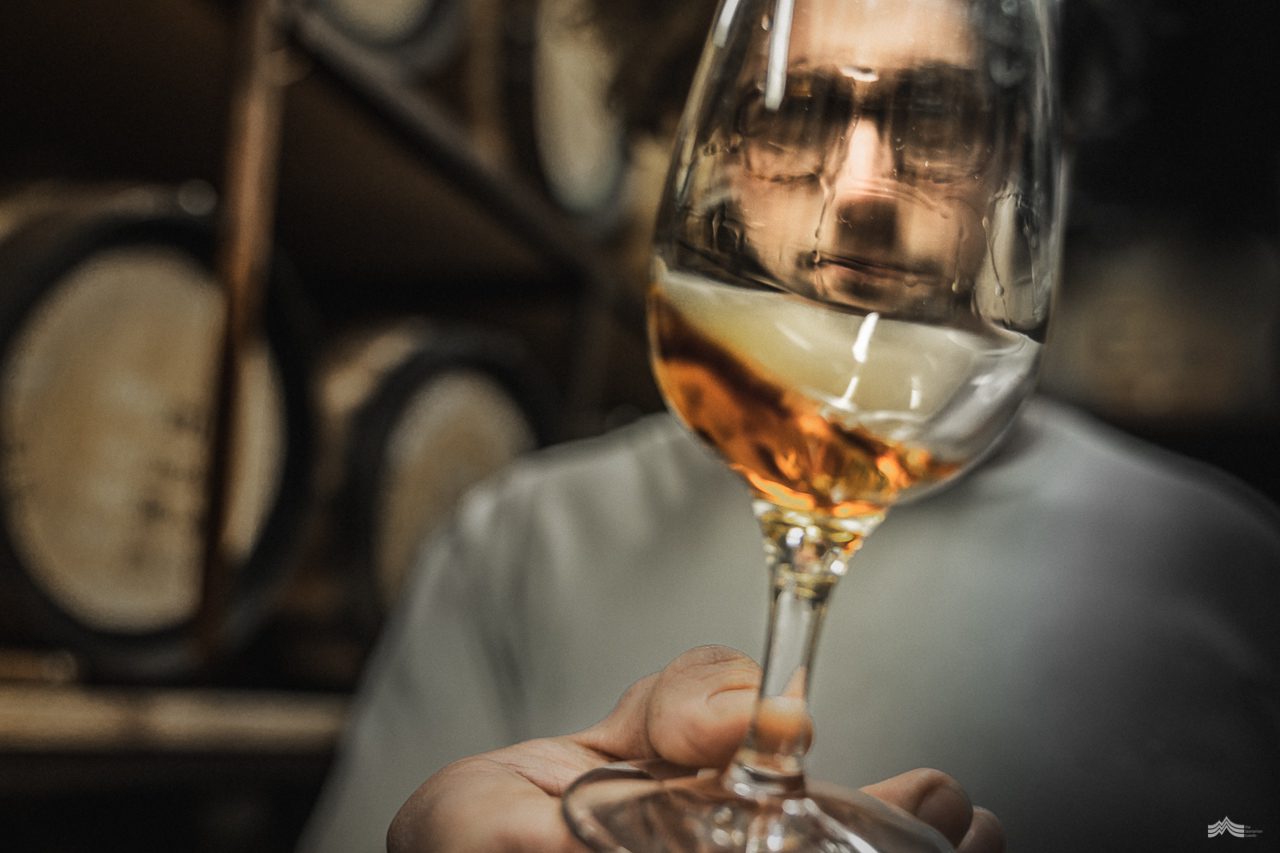 It’s a brand that’s positioning itself as one for the modern whisky drinker. “We’re only interested in doing small batches here and aren’t making any apologies for being tiny,” says Jack. “I’d like people to think about us as being very respectful to traditional distilling processes whilst remaining humble in our approach. It’s quality over quantity for sure.”

“I guess there’s a bit of pressure to make sure it’s good,” says Jack, flashing a cheeky grin. “After all, there’s the family name to uphold. Thankfully, mum and dad have given it their tick of approval.”

“I’d certainly like to mention the support of Bill Lark in getting Battery Point Distillery off the ground,” says Lloyd. “He’s been extremely generous with his knowledge and has only been too happy to offer advice wherever he can. In fact, we’ve felt welcomed into the Tasmanian whisky industry from the outset. Everyone has been only too willing to have a chat and share their experiences. Tassie is remarkable like that – full of humble people who will go out of their way to support others. They’re keen to grow the industry for the greater good.”

Discussing their September 2021 launch, it’s clear Jack is excited about the pending release. This is a friendly and intelligent young man happy to share his passions with others. “I guess you could say that I’ve developed two passions,” describes Jack. “One is whisky and the other is theatre. They often collide and what they have in common is that they bring people together. That’s what I like about them.” 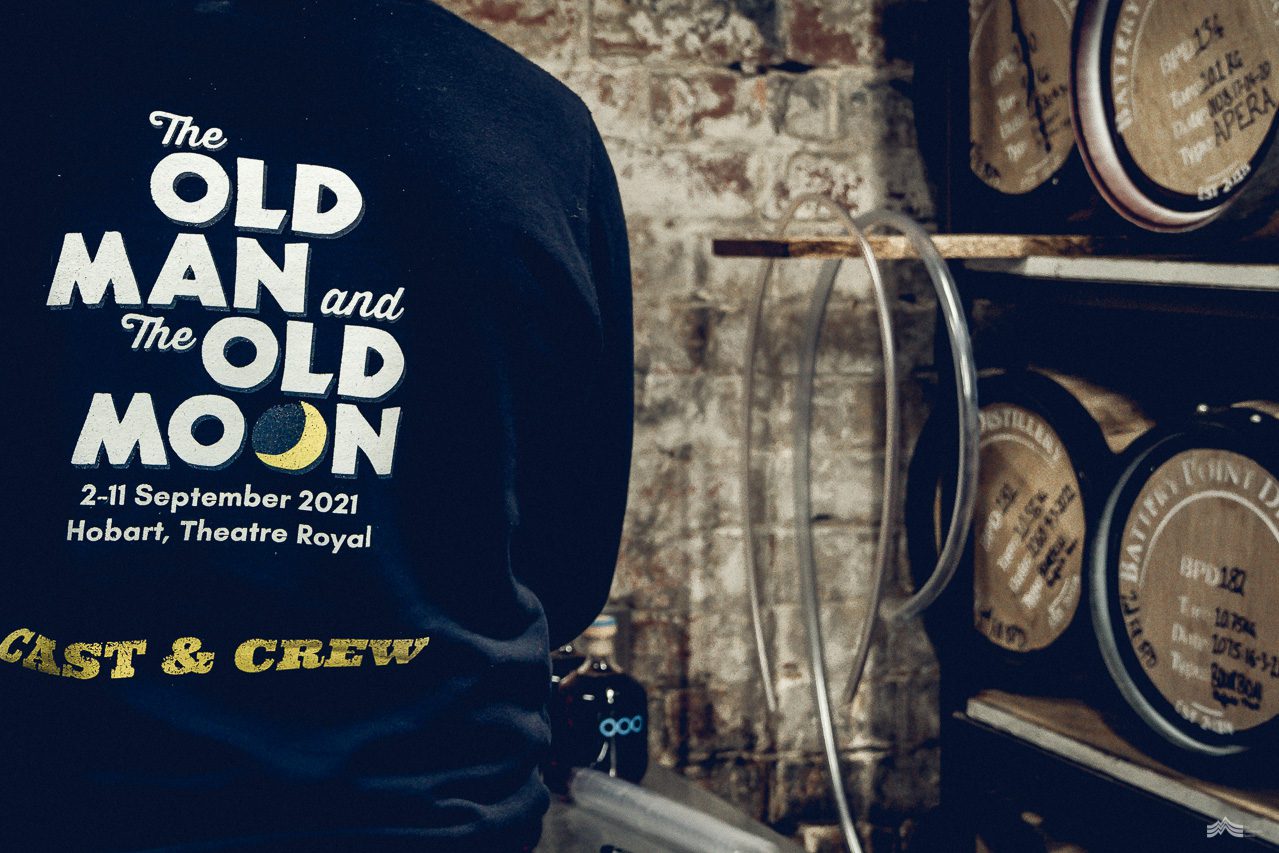 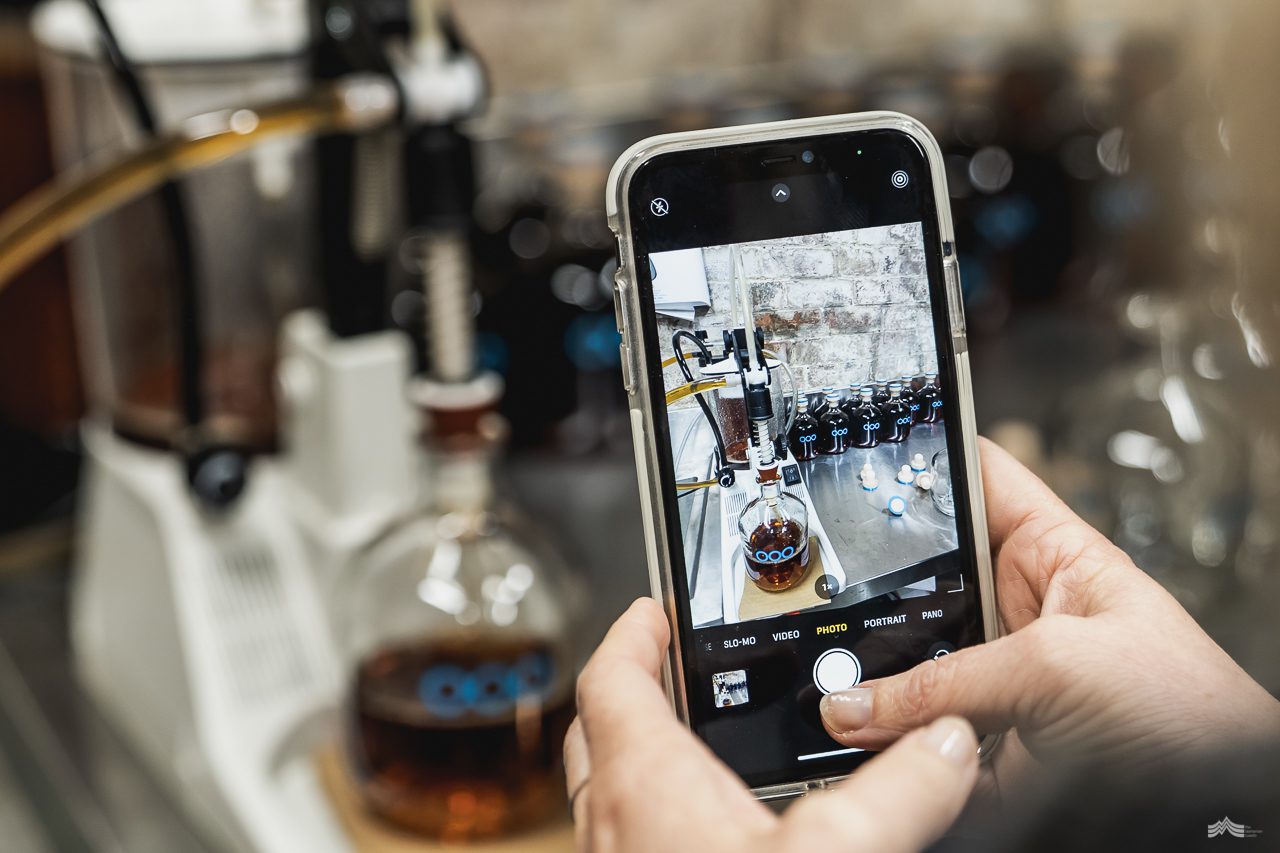 September also heralds Jack’s debut as a producer. “I’ve directed four productions up until now, but this is my first time as producer,” he explains. “The Old Man and the Old Moon is a sea-faring epic about an old man who has long served as the caretaker of the moon. When his wife disappears, he sets out to find her, throwing the world into disarray. We have an entirely local production team and it’s all come together so well. It’s full of lively folk music, puppetry, singing…and is full of joy and adventure. To be able to do it at the Theatre Royal is just fantastic.”

“The thing that continues to strike me about Tasmania is the opportunities that abound here,” says Jack. “I probably wouldn’t have been able to pull this off in a bigger city…opportunities for young directors are pretty scarce. But here in Tassie, people are very happy to give you a go. We have a talented, world class cast of performers and musicians and storytellers from all different backgrounds. Tasmania is unique like that – I love the opportunities that arise from staying small.”

Standing on the streets of Battery Point after dark, one can soak up the vibe that these two characters are trying to convey. In the glow of the streetlights one can make out the painstaking detail that abounds – from the glorious hand-carved sandstone walls to the ornate balustrading. Understated elegance and quality rein here, and time seems to only make it better. A stone’s throw down the road, oblivious to the history surrounding them, revellers are enjoying a tipple at some of Hobart’s oldest pubs.

“It’s quite convenient for the local bars too,” says Jack, motioning a hand in the vague direction of Salamanca. “Visitors love hearing how the drop they’re trying was distilled just a couple of hundred metres up the road. It’s a story of a couple of locals trying to capture the very best of Tasmania in a glass. One cask at a time.” 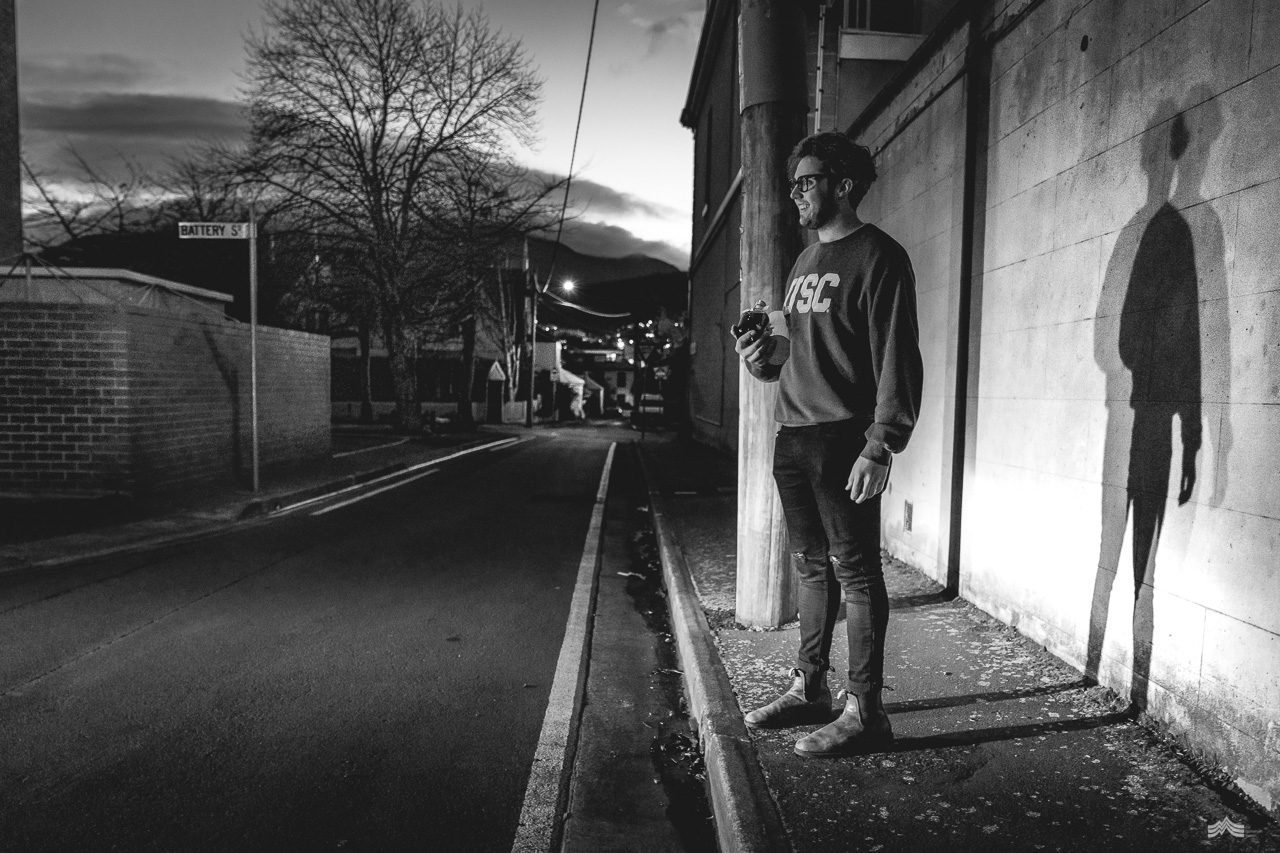 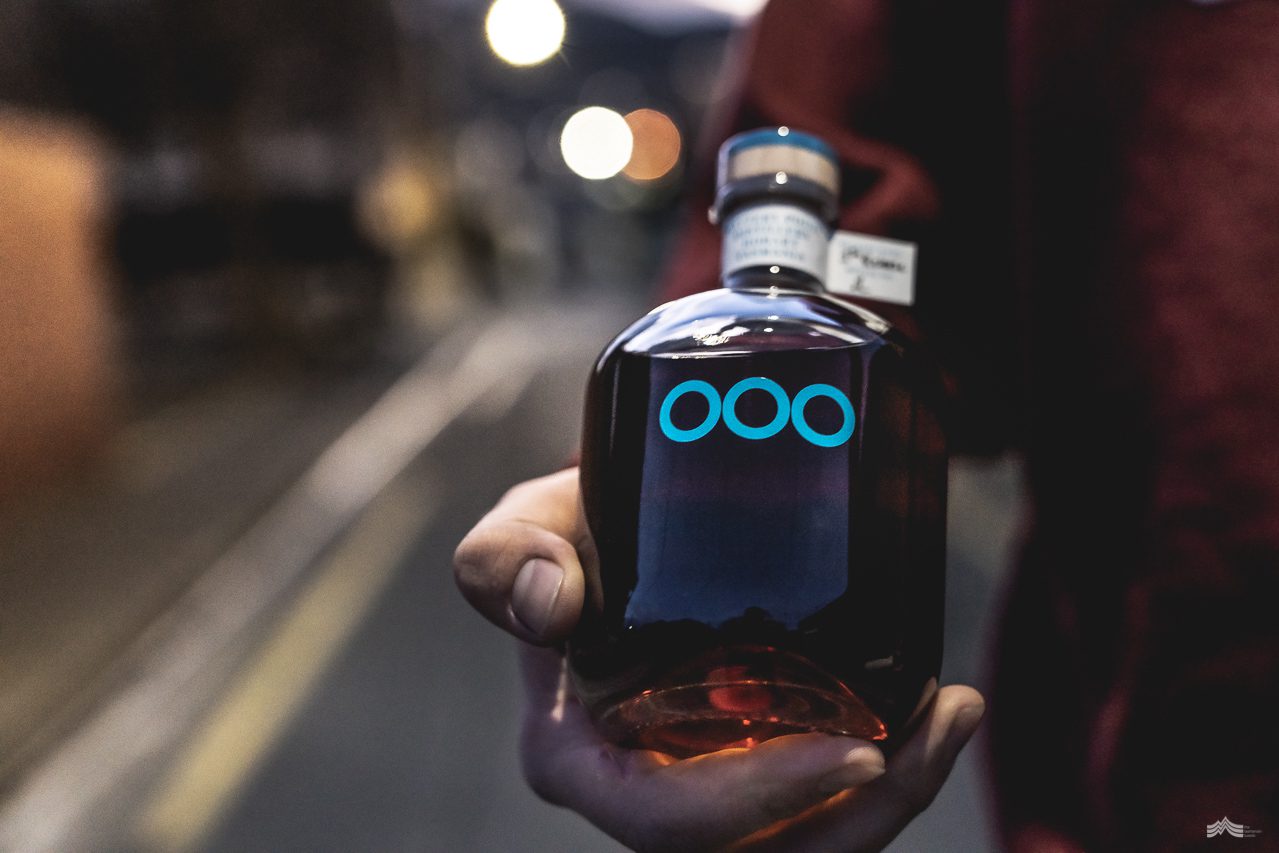 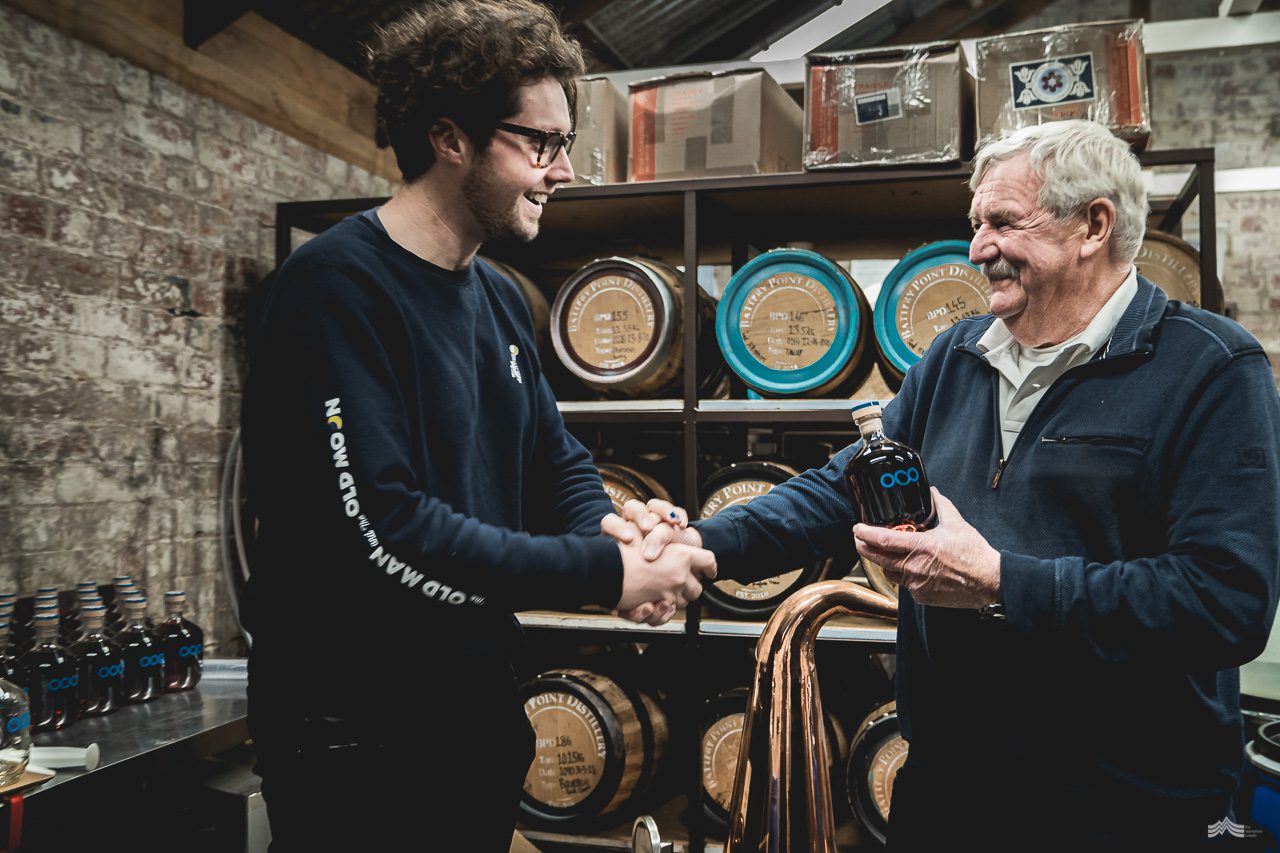