#89 Raising a glass to science 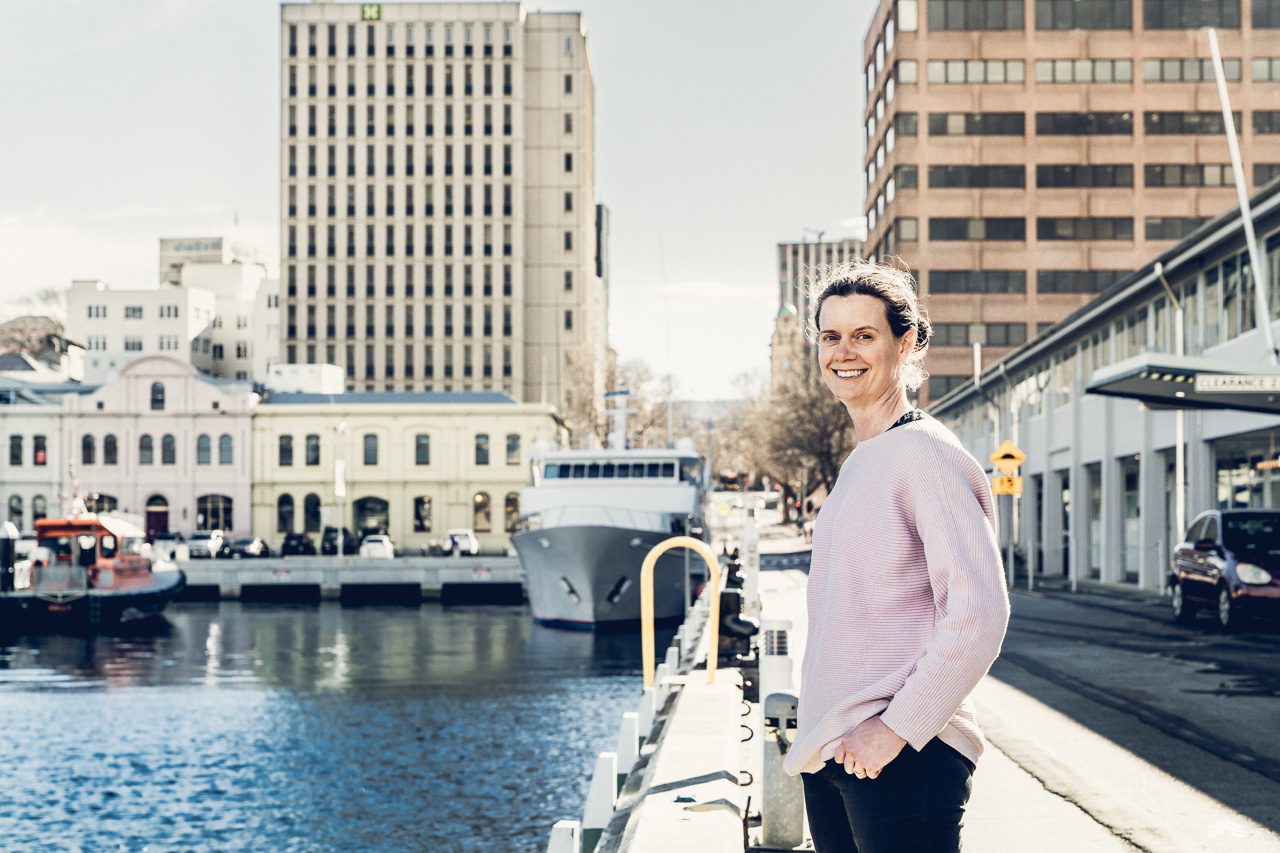 “This is the decade where things are really going to make a difference. Delve into the research and you’ll soon see that there’s a lot at stake. We really need as many people as possible to get on with it.”

These are the words of Dr Carolyn Maxwell, Hydro’s Climate and Water Strategy Specialist. An unassuming powerhouse behind the successful rehabilitation of the sensitive Lagoon of Islands site in the Central Highlands, Carolyn is a quiet changemaker working hard to shape a bright future for Tasmania.

Carolyn recalls her early life in the tiny farming community of Robertstown in South Australia. “It’s a very small township,” she starts. “There were less than 200 people living there when I was growing up.” Fast forward three decades, and it seems a rather fitting place for Carolyn’s story to begin. “Rather ironically, Robertstown is now becoming a renewable energy hub too.”

Carolyn is the first to admit her life has been defined by a philosophy of embracing opportunity. “One of the very first things I remember being excited about was our family relocating to regional NSW,” she laughs. “I spent most of my teenage years in Balranald. It seemed so big to my sisters and I. Moving a few times while we were growing up really opened the door to new experiences.”

“I never really had a plan,” Carolyn continues. “Mum and Dad valued education and were adamant that we should go to university. I remember being in Year 10 and trying to decide what subjects to pick,” she recalls. “I’d done well in science so I figured I’d just load my Year 11 and 12 timetable with science subjects and see where it led me.” 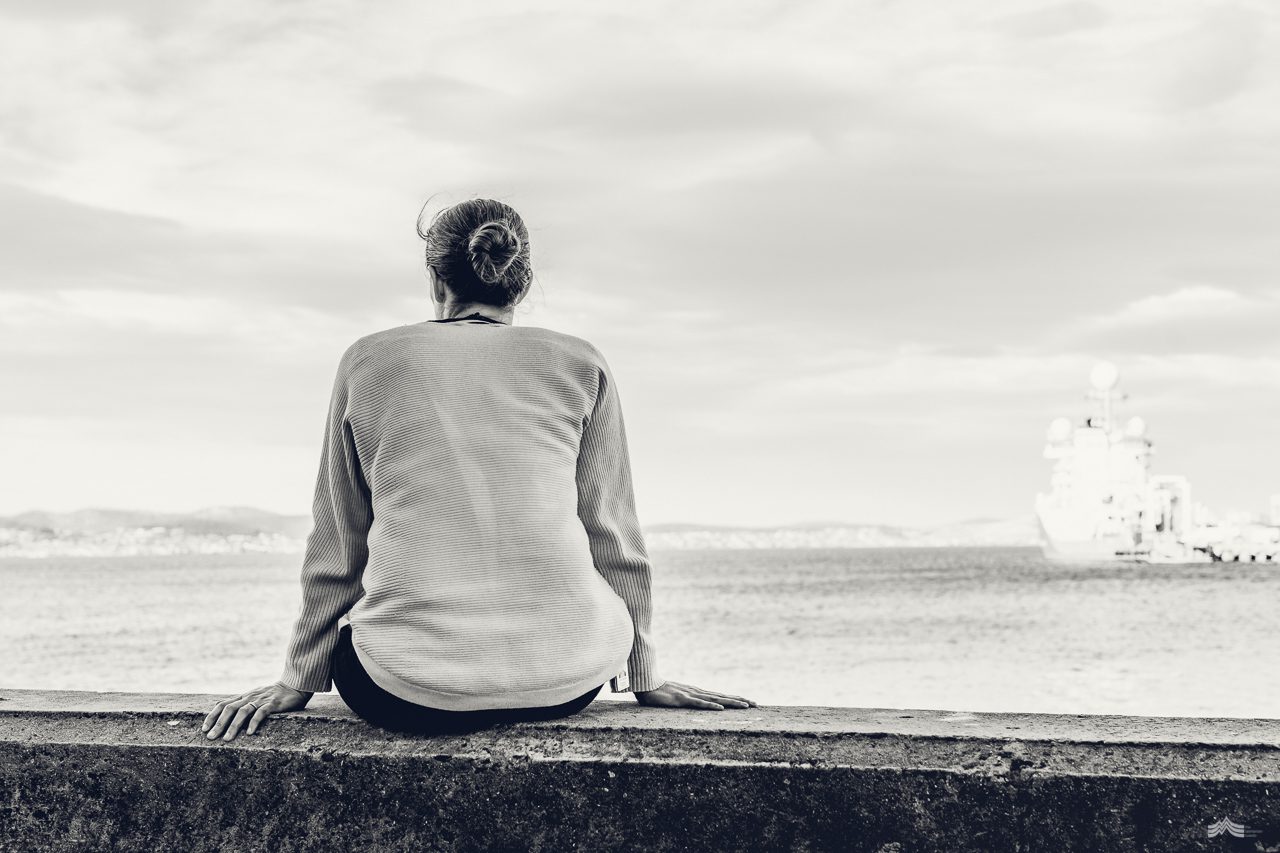 As a new graduate, Carolyn jumped at the chance to take up a role at Hardys Wines in Adelaide. “Analysing wine in their laboratories was a lot of fun. I have never done so many titrations in my life as I did when I was there, but I enjoyed every moment,” she grins. “I genuinely love the equipment and processes involved in chemistry and really took to that role. Hardys definitely valued scientific knowledge and encouraged us to be involved in the entire process. Carolyn recalls, “There was a lot of scope to contribute far beyond my primary quality control responsibilities. A favourite project of mine was investigating how different yeasts can effect bubble formation. They were very open to innovation.”

A move south in 2001 was spawned by Carolyn’s husband. “He was keen for a change at the time and became interested in what both Hydro and Tasmania had to offer. Before I knew it, he’d scored a graduate role as an electrical engineer and we were packing our bags. I’d never even been to Tassie before.”

With her experience at Hardys under her belt, Carolyn landed a job at Hobart’s iconic Cascade Brewery. “Essentially it was also a quality control role, but it turned out that breweries are far less interested in variation,” she explains. “Whilst winemakers love each batch to be unique, back then brewers were all about consistency. I quickly came to the conclusion that there wasn’t going to be a future for me there without the scope to question and experiment.”

“Out of interest, I contacted the Hydro team to seek advice on how I could bridge the gap between my current skills and what they required in their scientific staff. They were extremely helpful and happy to share their knowledge, readily providing me with two alternatives,” she smiles. “The first was a list of subjects I could pick up at uni. The second was a fascinating PhD that they had on offer. Needless to say, I jumped at the latter.”

“Sometimes I feel a little like I’ve never made a real career decision in my life and that the opportunities have simply presented themselves. But perhaps the trick is just to keep picking them up and running with them.”

Carolyn’s PhD turned out to be not only a defining point in her career, but also for the Hydro itself. “I took on an investigation of a Hydro site in the Central Highlands called Lagoon of Islands,” she explains. “So named for its unique string of vegetation ‘islands’ that once floated on mats of native reeds, it was formerly a wetland ecosystem rich in biodiversity. The site was dammed in 1964 to deliver irrigation to farmers around Ouse and basically things had deteriorated. With the drought in the mid-2000s, it became what was essentially a foul smelling algal swamp. The water quality was not acceptable for downstream users.” 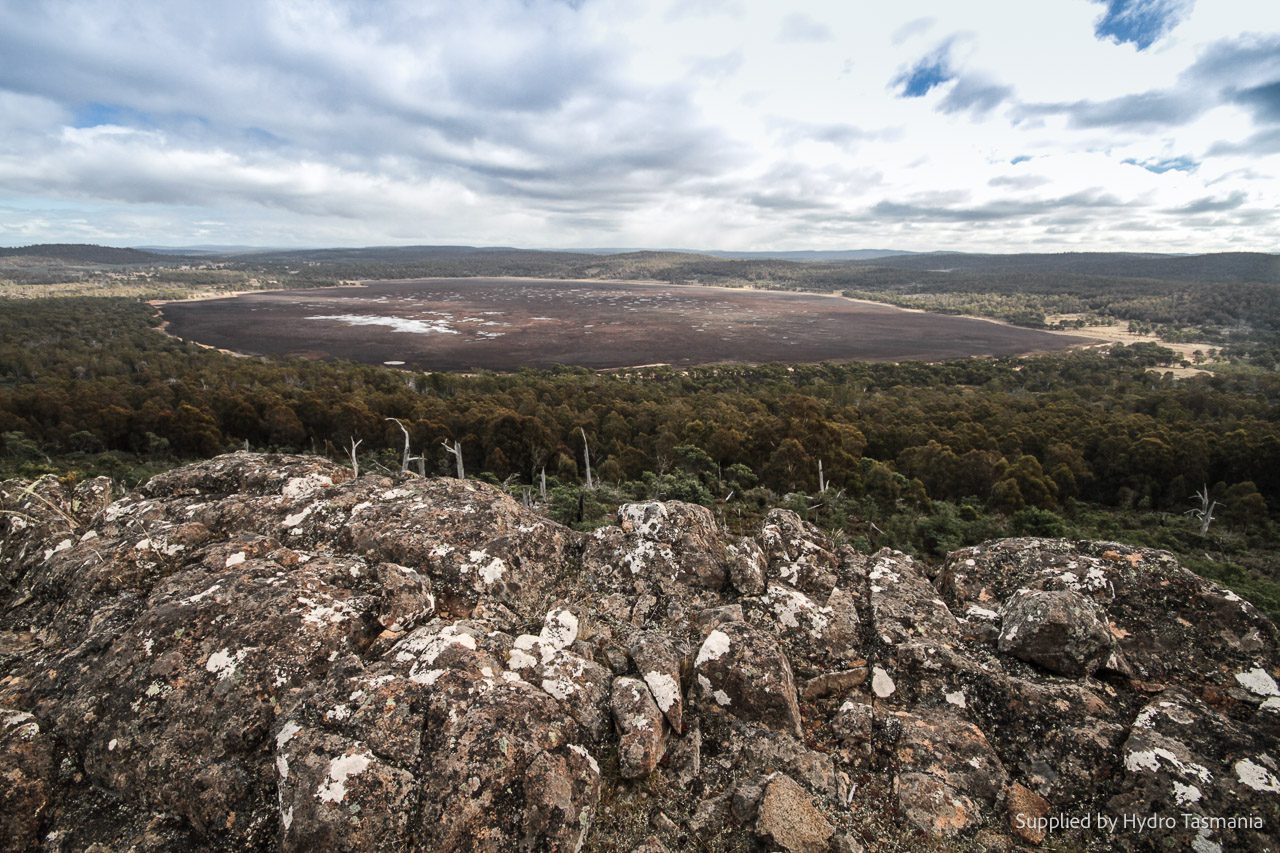 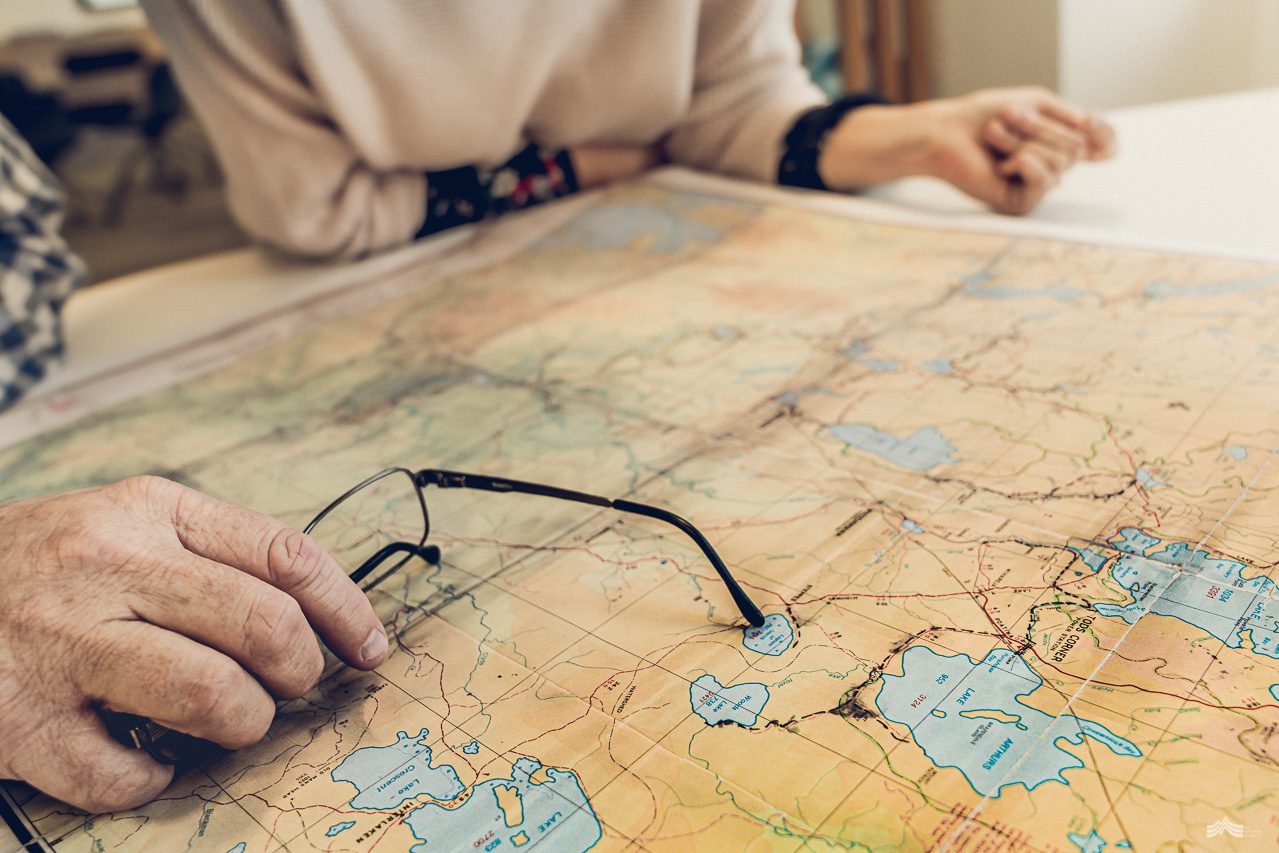 “My PhD was investigated the options to improve water quality and rectify the problem. It was a significant undertaking and one that threw me onto a steep learning curve. I explored numerous options but only one of them could provide a long-term solution to the ongoing water quality problem.”

Carolyn explains the recommendation that arose from her research, “My PhD proposed that Hydro should decommission the dam and rehabilitate the site. It was an ambitious recommendation, and I didn’t expect them to pick it up.”

But it was when Hydro accepted her recommendation that Carolyn’s work truly began. “At the time, only one other dam of that scale in Australia had been decommissioned – and only recently –  so there weren’t any examples to guide the project,” she explains. “We pulled together an experienced panel of scientific experts to advise us. That was the best decision we ever made, as the knowledge and support of that panel proved invaluable. They were fundamental to the success of the entire project and I really lent on their experience.”

Chatting away animatedly, Carolyn’s passion for the Lagoon of Islands project is palpable. “Listening to the ecological experts we’d convened, like Peter Davies and Margaret Brock, I was confident that if we got the water quality right that everything else would respond. We focussed on the hydrological conditions with the view that they were key to the flora and fauna returning.” 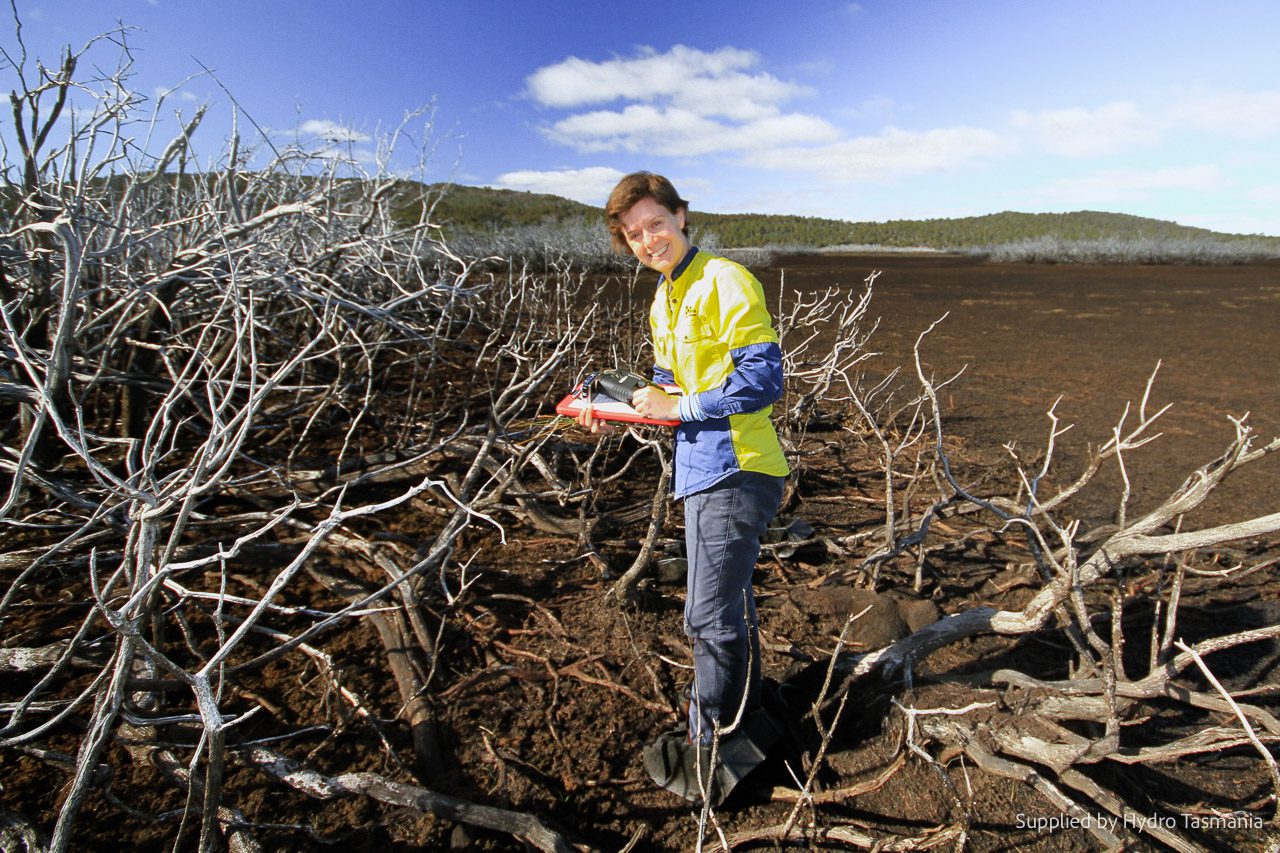 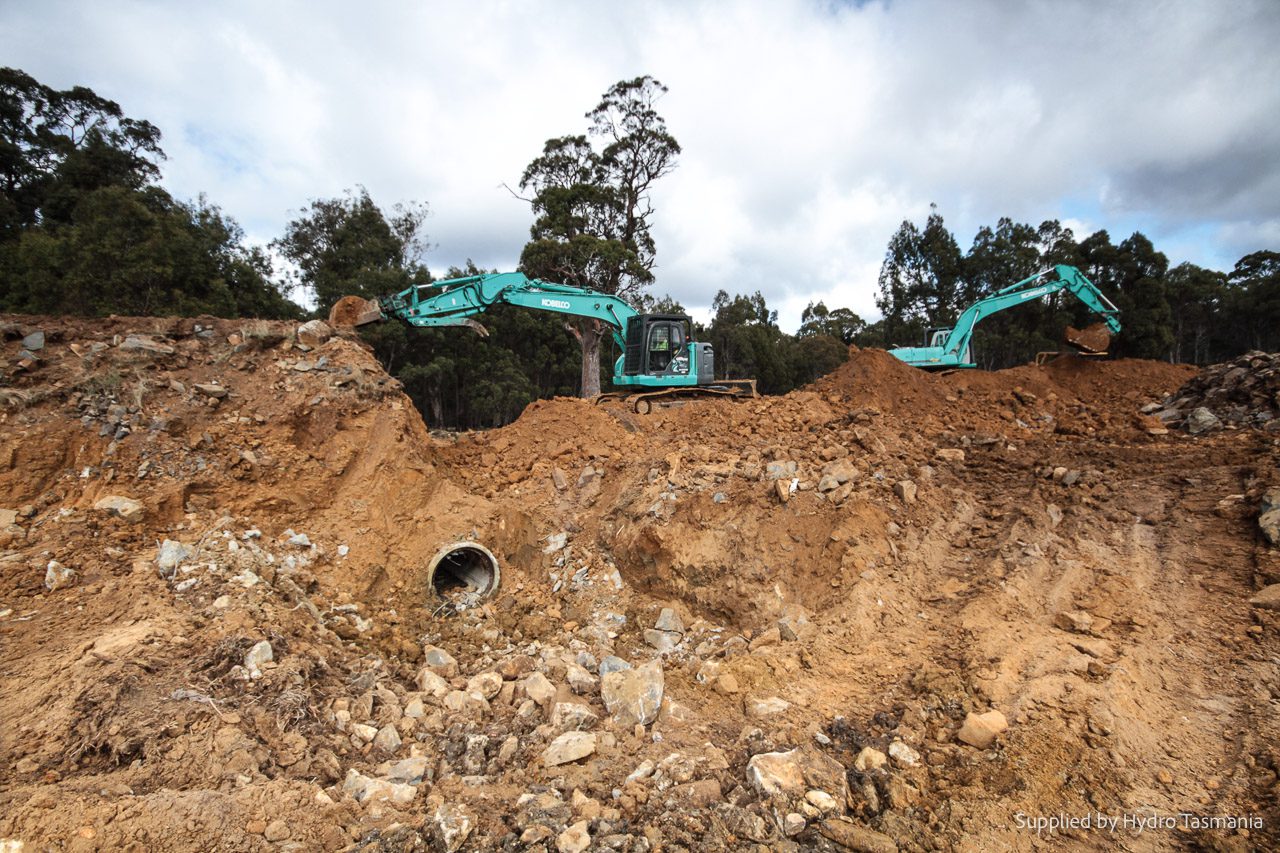 After redirecting four different tributaries back to their natural course and decommissioning nearby Ripple Creek Canal in 2010, the dam wall itself was removed in 2013. “We’re talking a 320 metre long dam, with a six metre high wall and all its associated infrastructure,” explains Carolyn. “It was a huge undertaking. And then once that was complete the process of site rehabilitation could commence.”

The rehabilitation of the Lagoon of Islands is a long-term project that remains closely monitored by Hydro. “The site is closed to the public at present to give this fragile area the best chance of a full recovery. We’re seeing the water quality go from strength to strength and the revegetation has progressed far more quickly than we initially anticipated so I’m confident it will get there.” 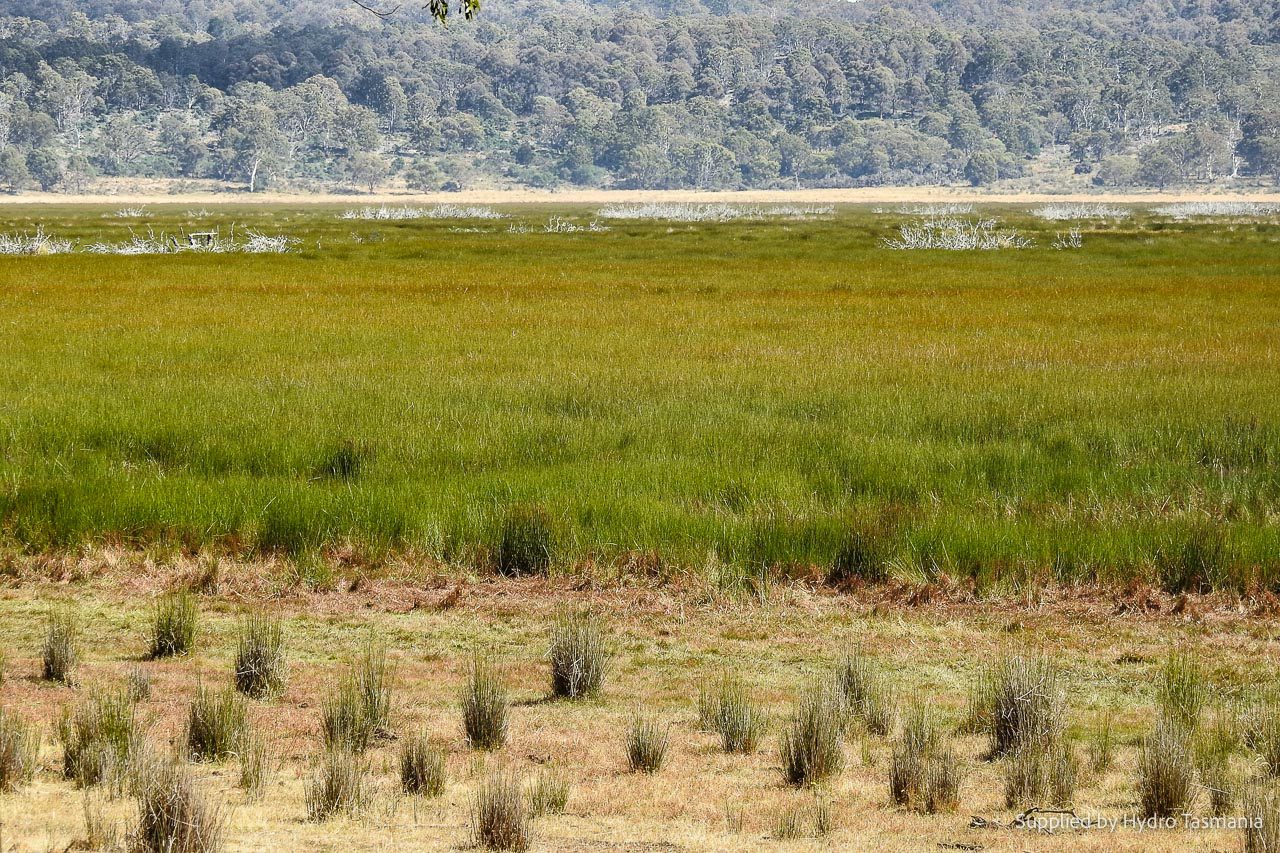 The Lagoon of Islands project ignited a passion for environmental management that had been slowly brewing deep within Carolyn. “Growing up, I was very aware of the huge algal blooms in the Murray-Darling. Some of those significant events really stuck with me…I even remember thinking as a teenager that I’d like to contribute to solving that problem one day. In more recent years my personal interest in climate change and environmental impact has really developed. I think when you care about something, you can’t not jump in and get your hands dirty,” says Carolyn.

Two years ago Hydro created a role for a climate specialist. “It certainly sparked my interest,” nods Carolyn enthusiastically. “Today that role sees me working right across the business and with a strategic focus. The role is all about the long-term and what we can do about climate change now. For example, we work with researchers about how we forecast the large scale climate events that lie ahead and how we can manage our energy resources accordingly. It’s the extreme weather events I’m interested in. We need to know when a drought is coming well ahead of schedule so that we can manage our resources accordingly.” 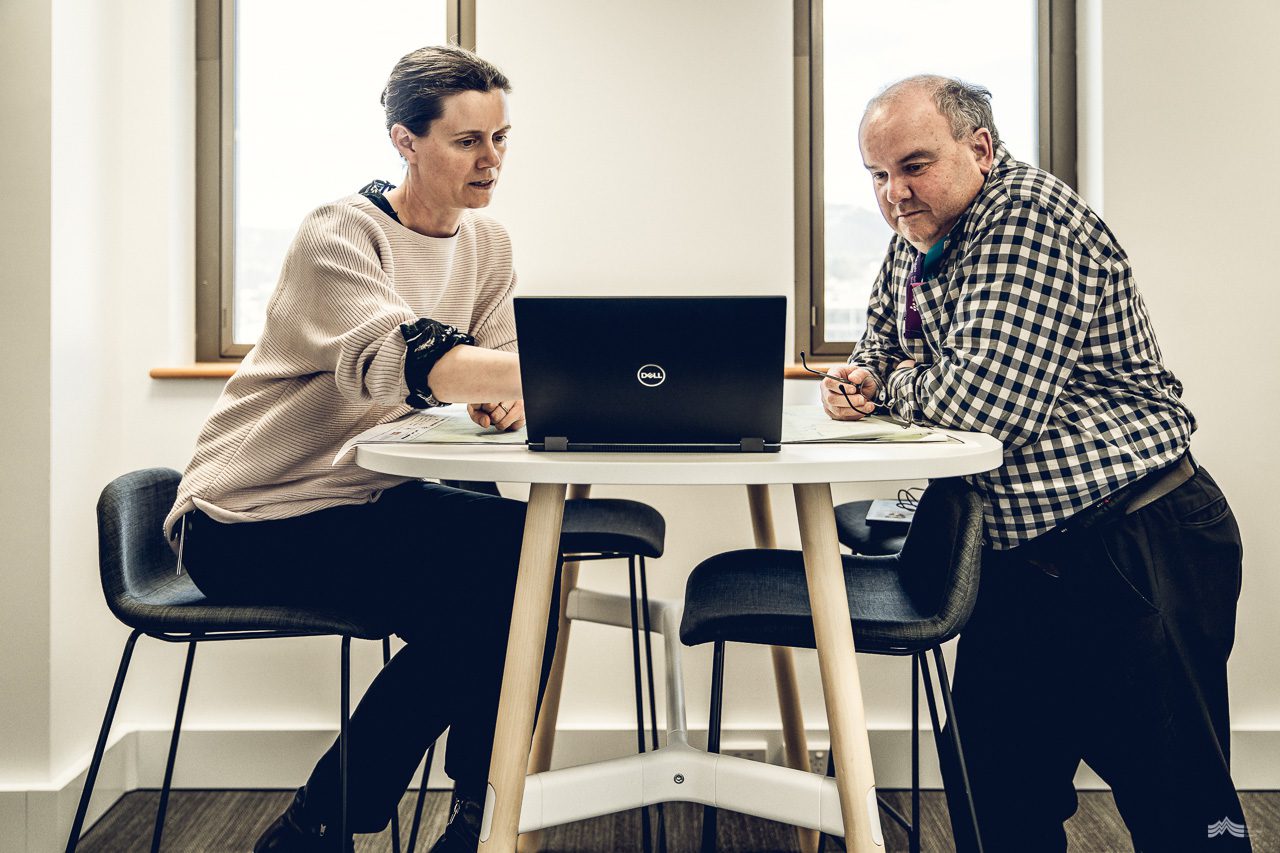 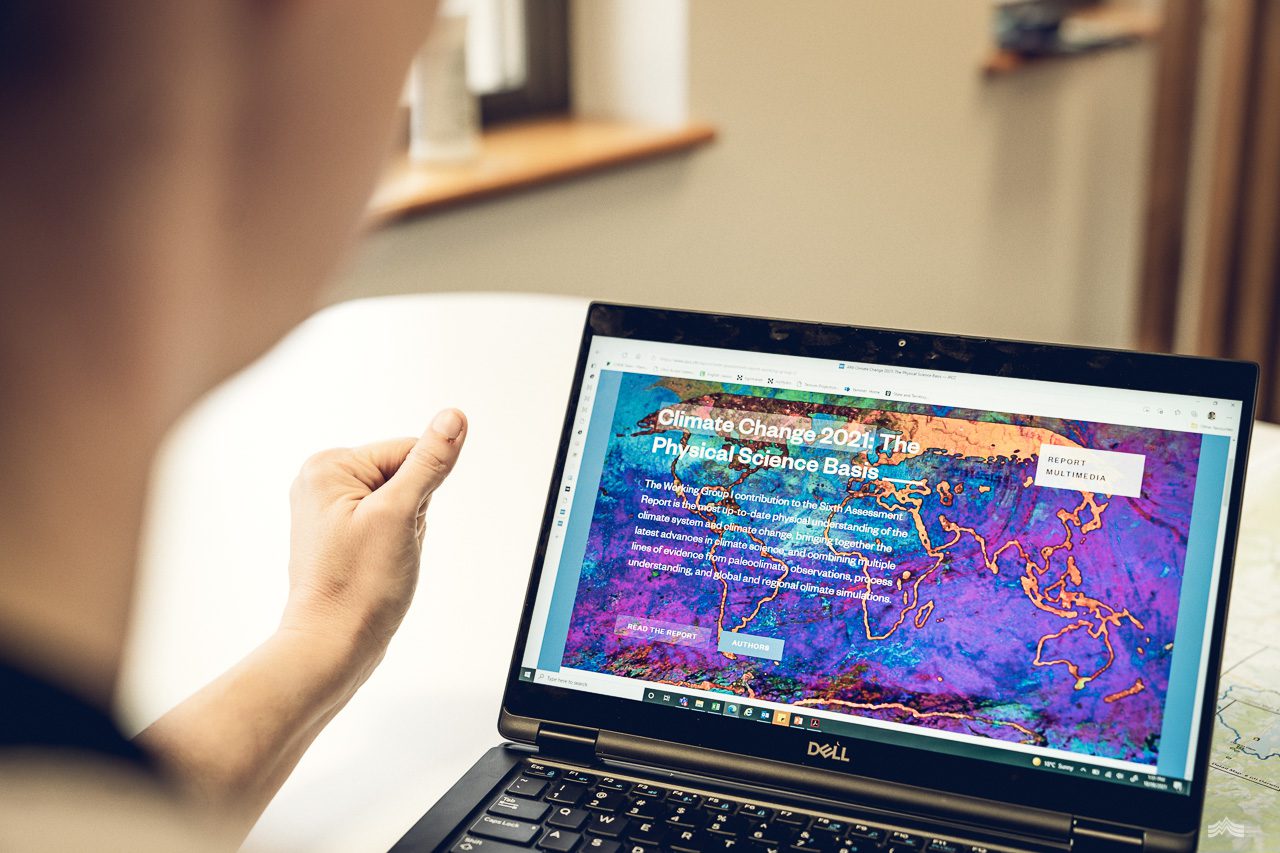 “Working on Lagoon of Islands rehabilitation, and on our lakes throughout two drought periods, the threats posed from climate change have become increasingly obvious.” Carolyn continues, “We are working closely with BoM, CSIRO and UTAS to translate global and national research into what it means for Tasmania. Hydro has a long history of supporting this work – including the climate futures project as well as an annual symposium that brings together Tasmanian climate researchers with industry, business and government leaders. It’s all about discussing the latest activities so that we can address climate change issues here in Tasmania.”

“From Hydro’s perspective, we not only want to know we can deliver Tasmania’s energy needs right now, but also 20 years from now. There’s a lot of modelling involved and continual development of that modelling.”

Weather and climate data is critical in Tasmania as the state’s electricity supply is intrinsically linked to rainfall. “We know extreme weather events such as floods and droughts will come,” nods Carolyn. “The trick is knowing a particular event is coming as early as possible, so we can manage our storage levels accordingly. Likewise with climate change – we know climate change is happening and that it’s changing the frequency of extreme events and long-term rainfall. Knowing what the latest science is projecting means we’re able to make better decisions for our state.” 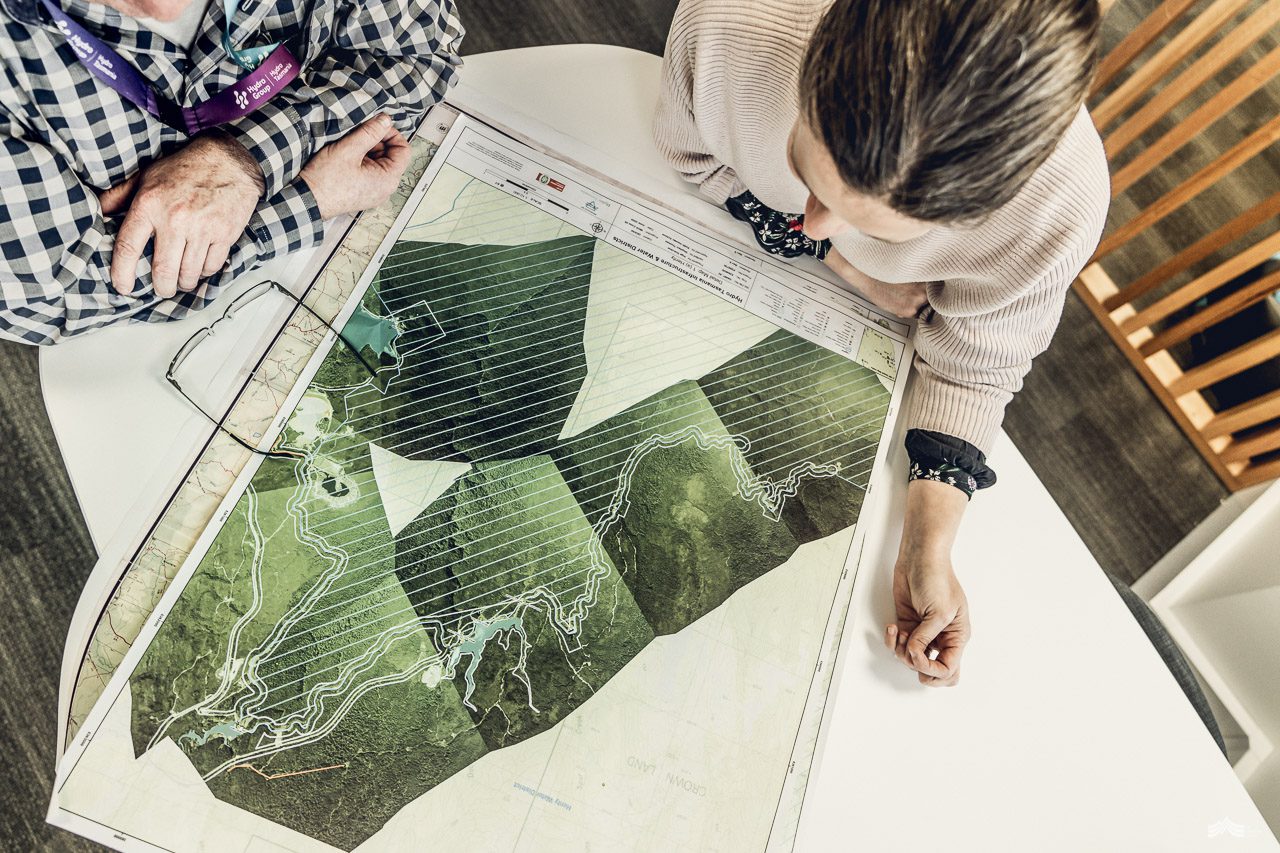 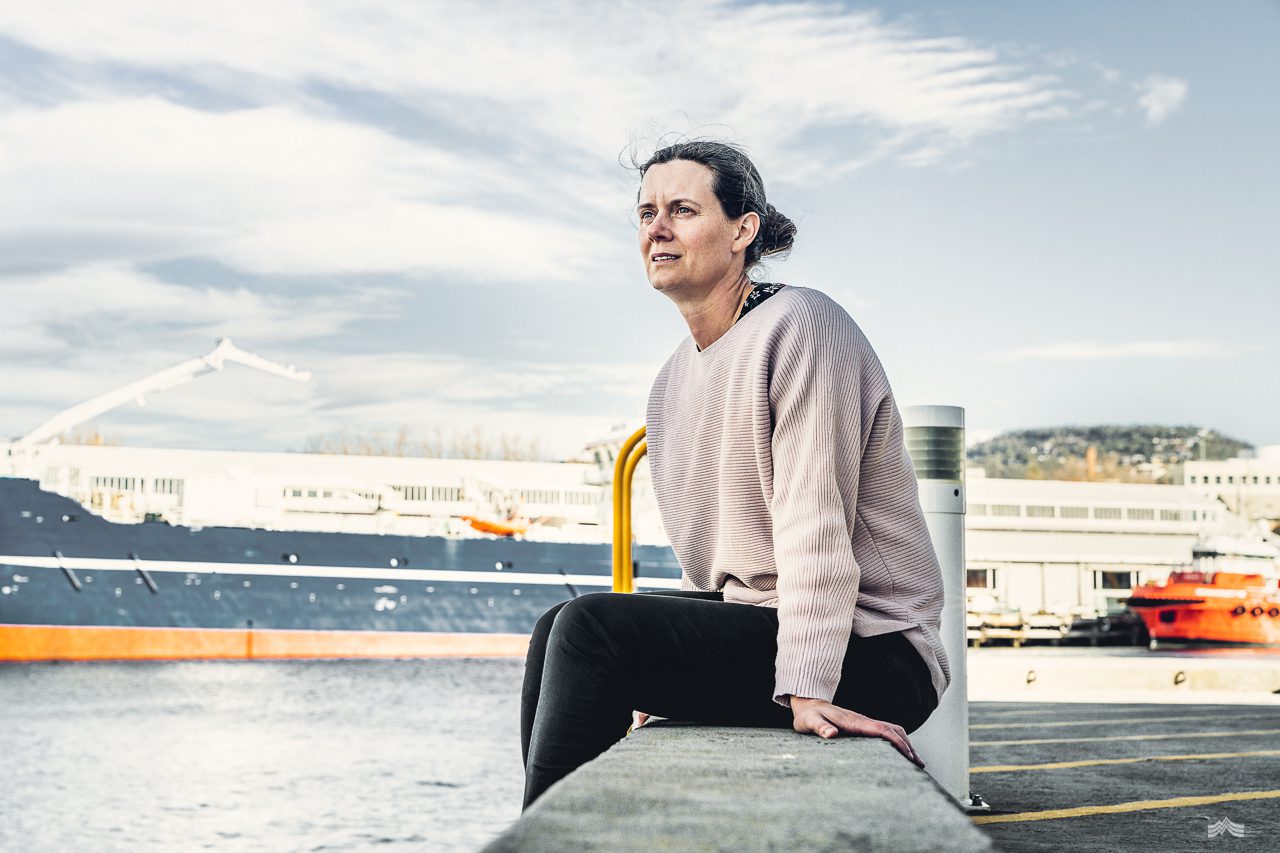 As climate risks globally continue to accelerate, Carolyn is positive about the opportunity for Tasmania. “The current push to de-carbonise the economy is great and represents huge opportunities for us here in Tasmania. The Battery of the Nation and Marinus Link projects are perfect examples of how we can step up and supplement the country’s growing use of wind and solar. There’s a lot more to be done in this space.”

But there’s personal fallout in such a role too. “There is certainly an impact on the mental health of climate change researchers,” she explains. “Sometimes it all seems hopeless and you really feel like things are spiralling out of control. It can be pretty confronting reading the latest research, knowing what’s at stake. It can be an overwhelming feeling that we as a society are simply not doing enough. I’m thankful I get to work for a company that is grounded solely in renewable energy and is doing its very best to support a green future for Tasmania. That’s very important to me.”

Carolyn’s philosophy is one she fosters in the next generation. For over a decade now she’s visited her children’s primary school each week to offer her scientific knowledge. “We kids and I discuss all sort of topics together, nothing is off limits – sustainability, ecology…even astrophysics. If I don’t know the answer, we research it together,” she explains. “It’s clear now that we lose kids from STEM as young as Year 5, once their initial fascination of nature subsides. It’s so important that we encourage an inquiring mindset and critical thinking. We desperately need those skills for the future.”

Carolyn’s own downtime comes on the netball court or by donning her runners and hitting her local eastern shore tracks. “Both of those things help me switch off and recharge,” she smiles. “I love having fun outdoors.”

“Tasmania is a great place for scientists,” Carolyn grins. “Our state attracts all sorts of brilliant minds who share similar passions. It’s something I’ve seen reflected at work too – there’s always a reason people join Hydro and an even bigger one that they tend to hang around.” She finishes, “Like me, everyone here is genuinely passionate about their role and focussed firmly on the future. The camaraderie is simply amazing.” 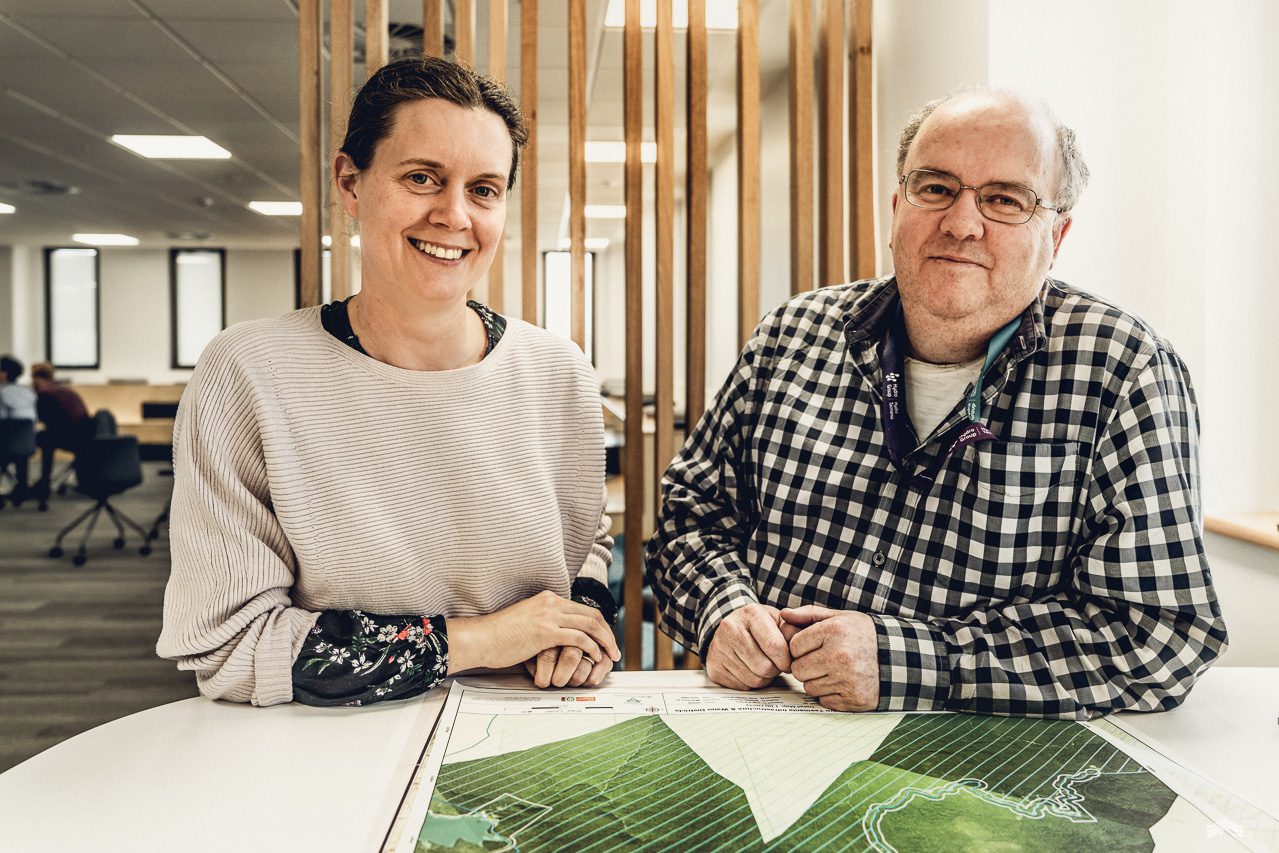 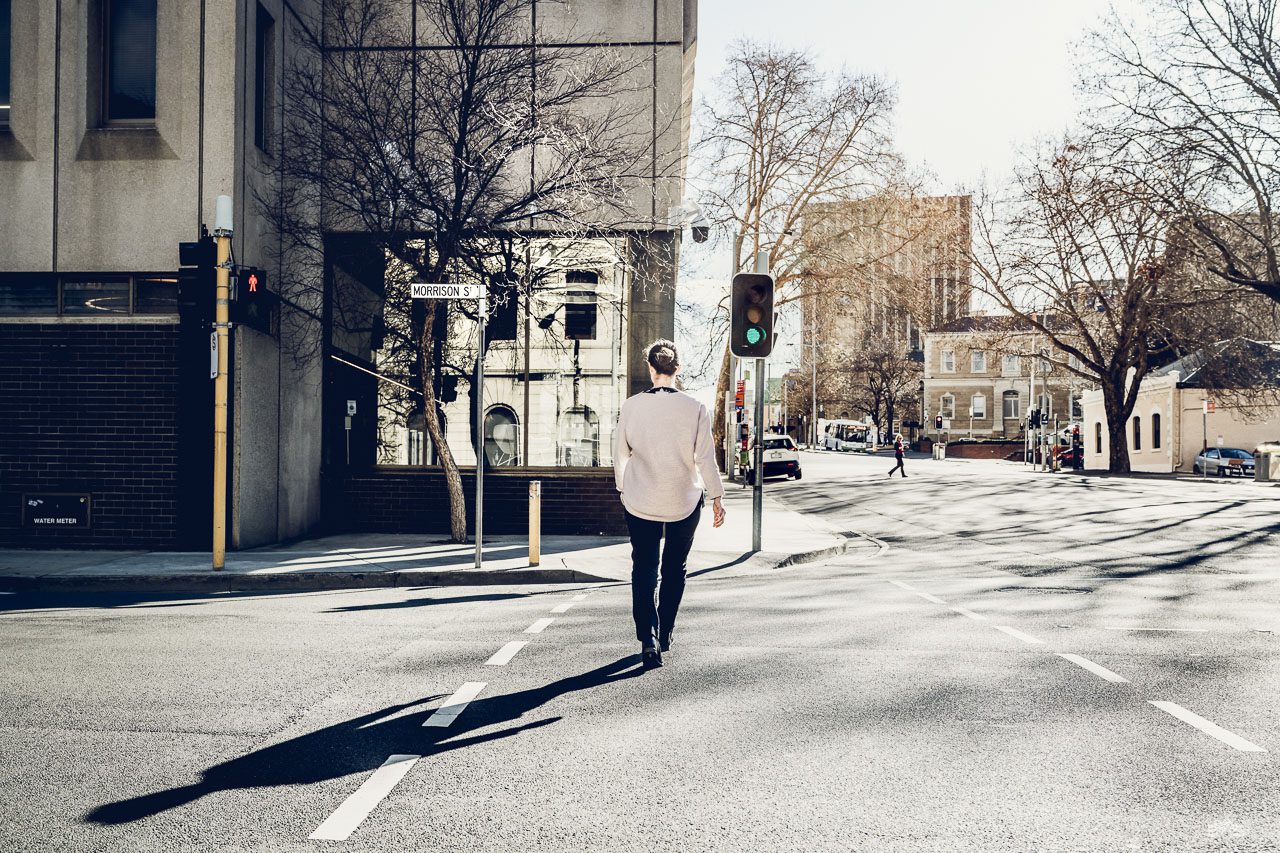