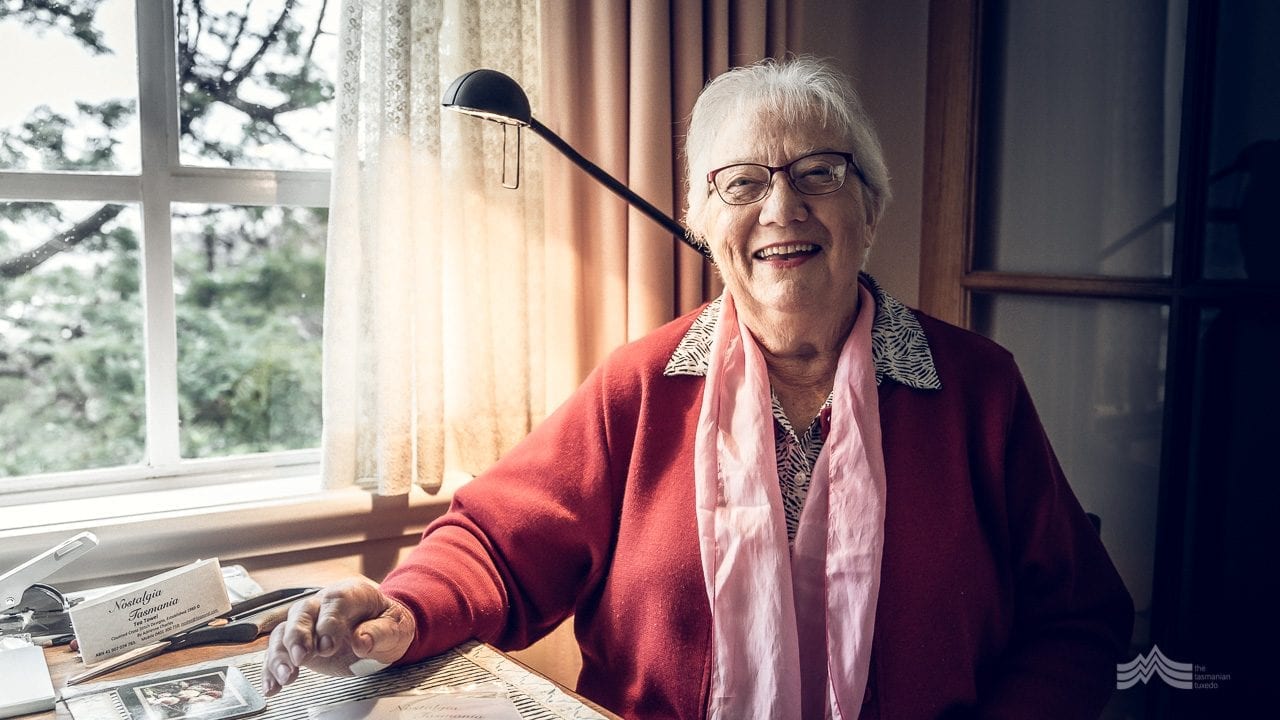 Adrienne Charles was born in a hallway of the Crown Street Women’s Hospital in Sydney. Her somewhat unconventional arrival into the world paved the way for the somewhat unconventional life ahead. At 82, Adrienne is full of stories and loves a chat. Sit down with her for an afternoon and two common threads emerge – creativity and entrepreneurship. She loves to create and she’s one of the best salespeople around.

Adrienne’s love of textiles can be traced right back to her childhood. “When it came to choosing my high school it was the uniform that got me,” she laughs. “I loved the navy skirt and white shirt, and thought it looked very smart. I enjoyed sewing from an early age, and in high school I even completed a piece of work on behalf of a friend. She ended up getting a credit and I’ve always thought that that grade was really mine!”

Adrienne says she’s always felt creative. “Writing, art, painting, designing, a bit of everything really,” she says when asked about her passions. “My mother was a brilliant woman, very intelligent and both a triple certificated Sister and an accomplished writer. My father was a firefighter, but also a professional singer and entertainer.” It appears a combination of creative genes were certainly passed down to the next generation. 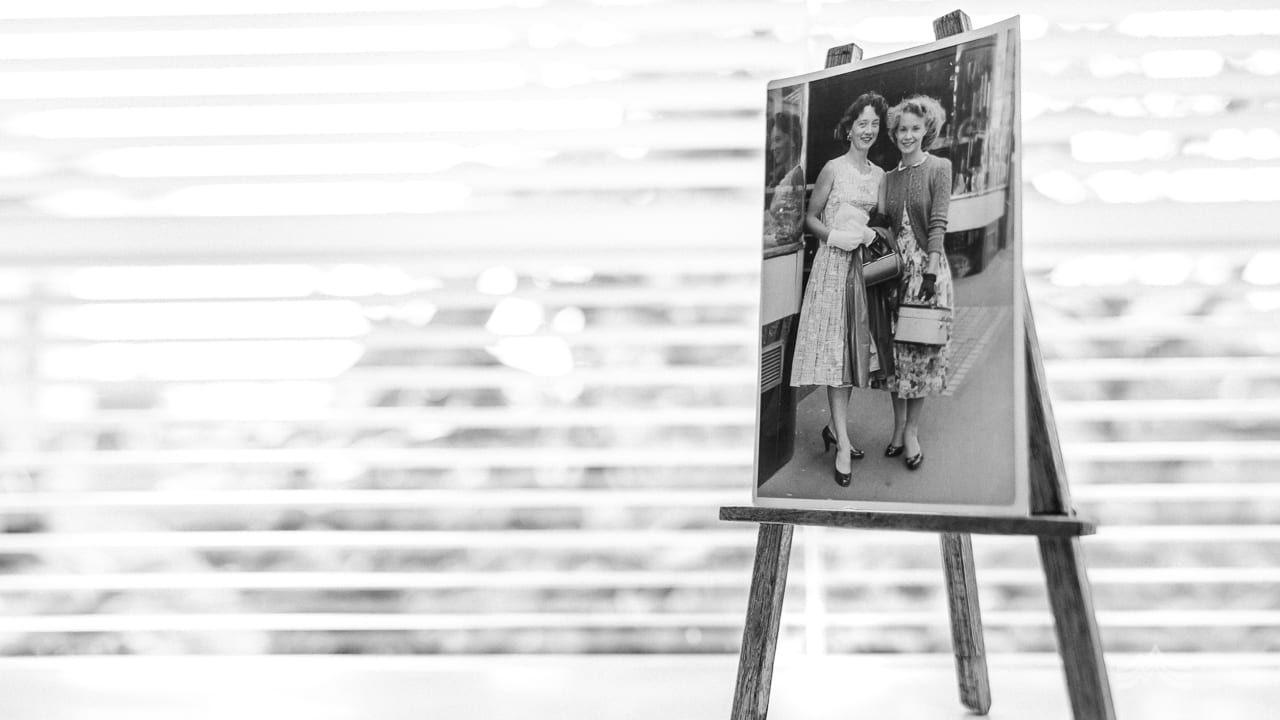 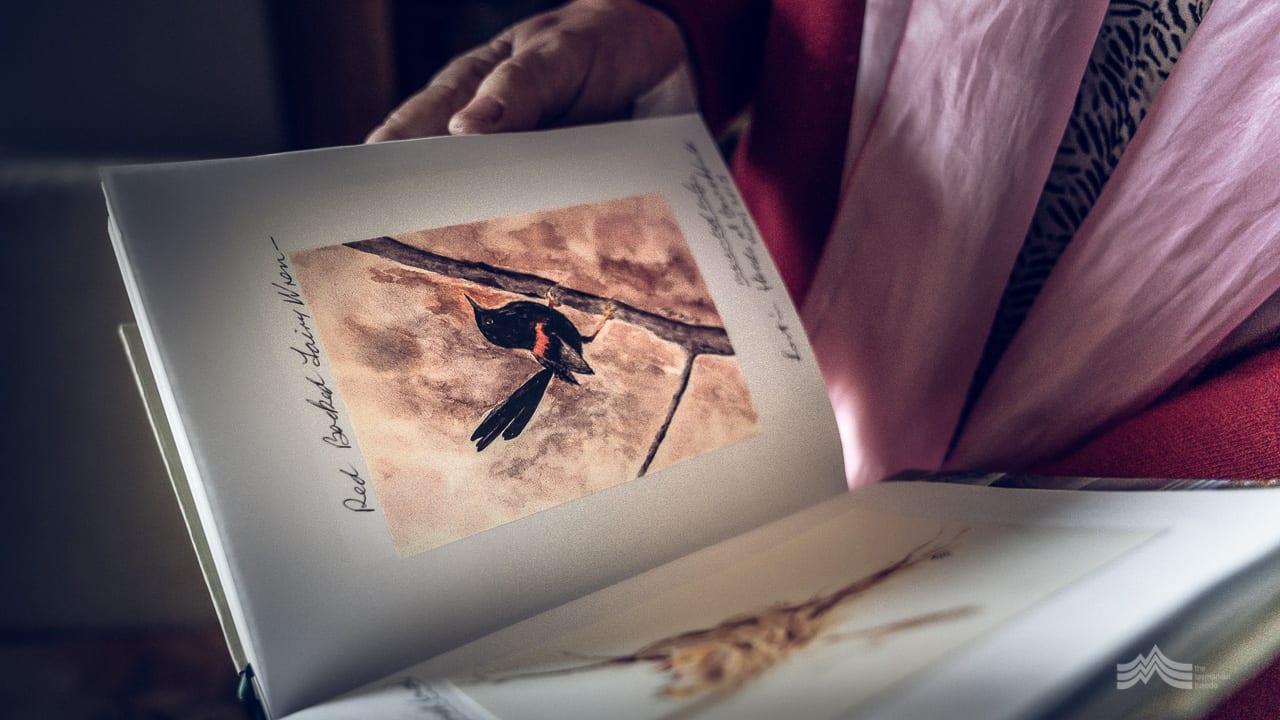 As was common in the day, Adrienne left school at 15. She applied for a job at a chartered accountants and vividly recalls being accompanied by her mother as she anxiously waited for her interview. “I was absolutely terrified. Mum sent me upstairs by myself for the interview, and things went relatively well. When I mentioned my mother was waiting for me downstairs, they insisted on meeting her. Being a petite and very attractive woman, I was sure I got that job thanks to mum,” she smiles. “My boss was instantly impressed by her.”

After three years honing her administrative skills, a young Adrienne followed in the footsteps of her elder siblings and set off for an adventure in rural NSW. “My sister had been working as a governess on outback stations and I liked the sound of it. My brother was also working on the land. So I headed about four hours North West of Sydney, a long way in those days, and was met at the train station by Mr and Mrs MacDonald and their three young daughters.”

“I spent three years there on a well known Merino stud station and really enjoyed the experience,” says Adrienne smiling. “I don’t know where I got the confidence from, but I did. The children’s lessons would arrive in the post every fortnight from the Blackfriars Correspondence School in Sydney. I would line the girls up each day at their desks in the school room or on the verandah, and teach the lessons which would then go back to Sydney via the next truck.” She recalls wistfully, “We’d also go on picnics and horse riding. It was a lovely time and the family were delightful, although women were not allowed in the woolshed back then… that was for men only. Wool was worth a ‘pound a pound’ in the mid-fifties, so it was a boom time then on the land.”

As the story goes, adventure called again when a girlfriend suggested a 1956 trip around Australia. “My old school friend loved the idea of Van Diemen’s Land, so that was to be our very first stop. The plan was to work for six weeks and then head back to Melbourne in time for the Olympic Games.” In Adrienne’s own words, “As it turned out, I arrived for six weeks and stayed a lifetime.” 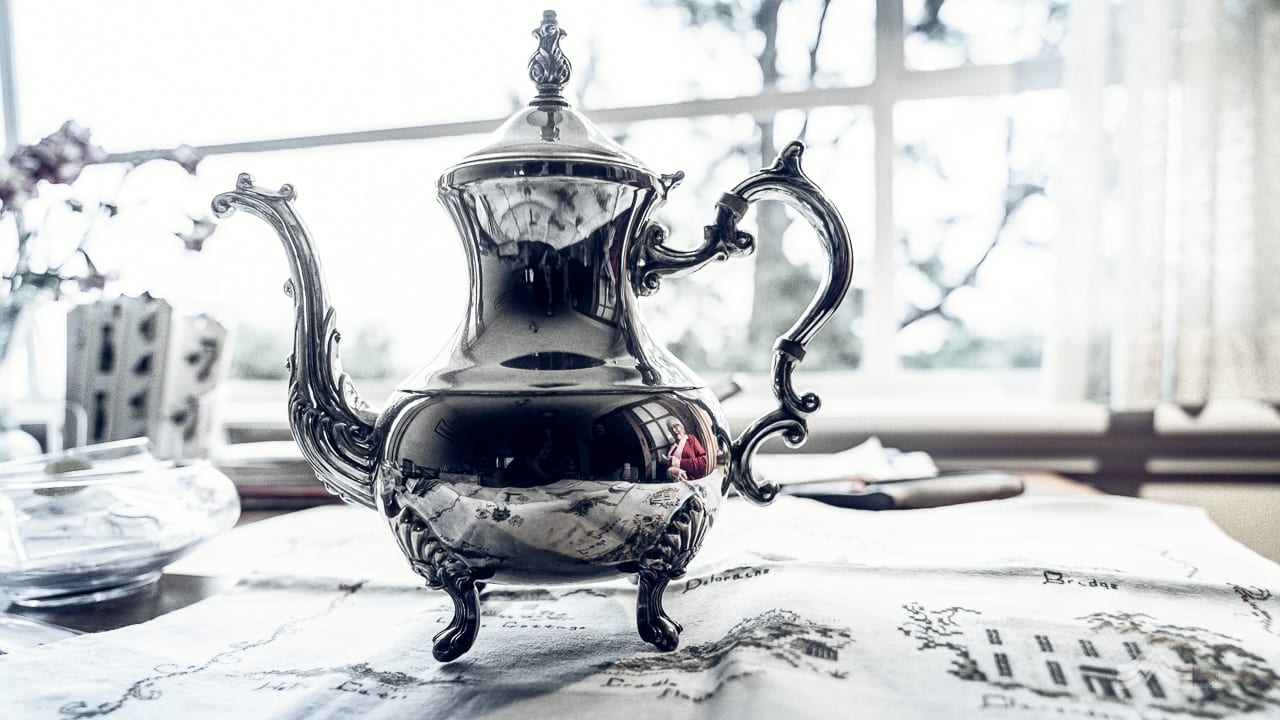 “Initially I found it hard to find work in Hobart, but I eventually found a job at City Motors Ford as their receptionist.” She recalls, “I couldn’t drive of course, so the young mechanics taught me on the job and I picked up what I thought was quite a lot of car knowledge. I’d receive a bonus if I sold anything extra to the clients, so I became quite good at upselling. Although I was quite shy as a girl, it melted away when I was talking about car seat covers or any other extras.”

Still living in that very same home, Adrienne goes on to explain her busy life raising young children and striving to make ends meet. “My mother grew up in the country and I think I inherited her love of history, art and crafts. I enjoyed visiting friends around Tasmania when I could manage it and would often visit a special friend on her historic property at Orford. It was she who instilled in me a love of the Tasmanian countryside.”

“Back in my City Motors days a lady from TAFE often came in. She was the Head of the Pattern and Clothing Department at the time. I was really encouraged to come to college, and do the four year course,” explains Adrienne. “I soon learnt to make my own patterns and all the basics of sewing. I even made my own wedding dress with the Head teacher’s help. That connection led to me being a dressmaker from home for over 25 years. We didn’t have much back then, so every little bit helped, especially with the children growing up.” A stint in sewing workshop, Silk and Textiles, and a part time position in Soundy’s repair department also enabled Adrienne to gain the necessary industrial experience she needed to apply for a full time position in TAFE at that time. 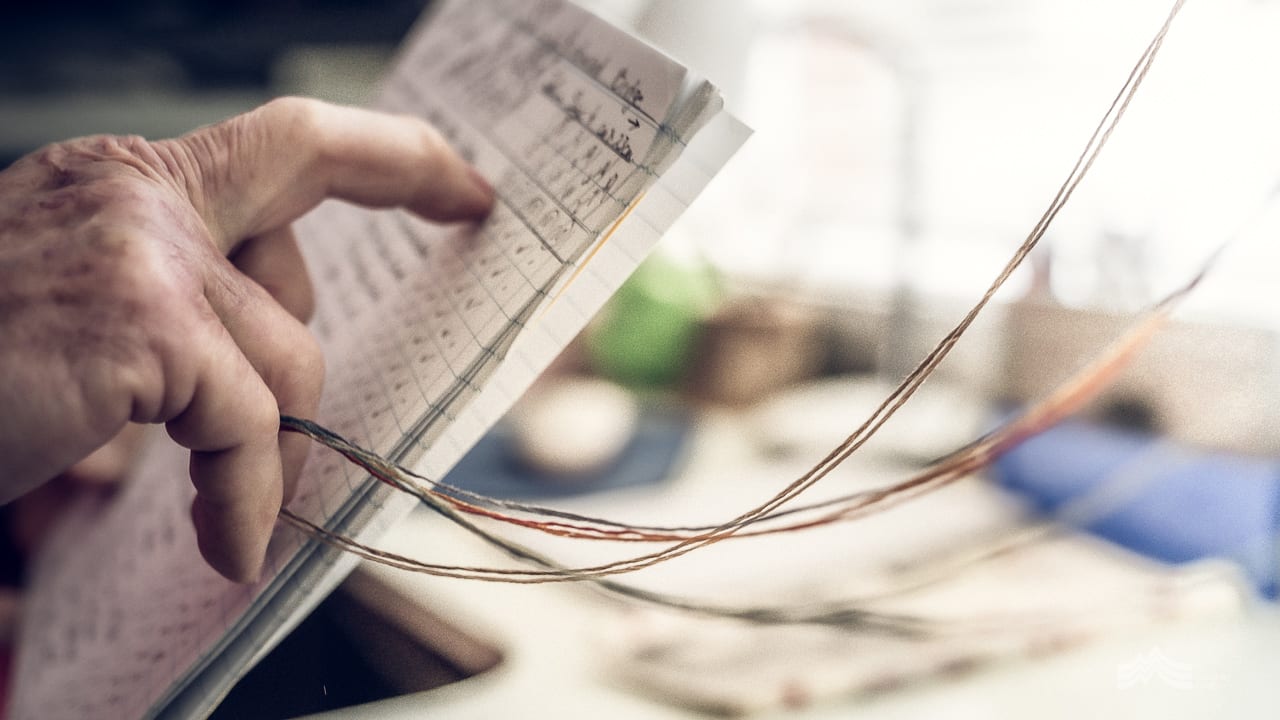 A call from TAFE years later saw Adrienne’s expert skills in demand. “They approached me to teach,” she recalls. “I started going in every Monday to shadow the existing Head teacher, then I would run through the very same lesson with my own class in the evening. The first time really was a lesson in self-preservation…I was so nervous! I remember earning $21 in one night and couldn’t believe I was earning money doing something I loved. Later I went on to complete my three year Technical Instructors Certificate and then the two year inaugural Diploma of Teaching for TAFE,” says Adrienne proudly. “I really enjoying the study after having left school so long ago and really thrived during that time.”

Following the passing of her beloved husband in 1987, Adrienne received a small gift from her daughter, “It was something to help occupy my mind at the time, although I was still very busy teaching too,” she says. The cross stitch indeed kept Adrienne busy, much to her daughter’s amusement. “Linda took one look and said, ‘Mum, you’ve made a mistake, you have to follow the graph’, but I was having way too much fun and thought my own interpretation of the design was much better. That was really the start of the next chapter.”

“My aim was to capture the beauty of Tasmania…from the warm and friendly people, the remarkable landscape to the elegant charm of country estates and romantic cottages. By sharing my love of this beautiful isle, I could offer others a nostalgic reminder of a holiday or home. It also allowed me do something I loved and I was accomplishing and producing a product that would last.”

Nostalgia Tasmania provided Adrienne with an outlet to create her own counted cross stitch designs, firstly by paying homage to many of Tasmania’s historic properties. “It started with Hawthorn Villa at Carrick. I designed the homestead and then started stitching it on to the fabric. Things grew from there really and I started producing kits that people could purchase. They make lovely mementos of a Tasmanian holiday and I enjoyed researching the history of each property and visiting them as much as I did creating the cross stitch itself.” 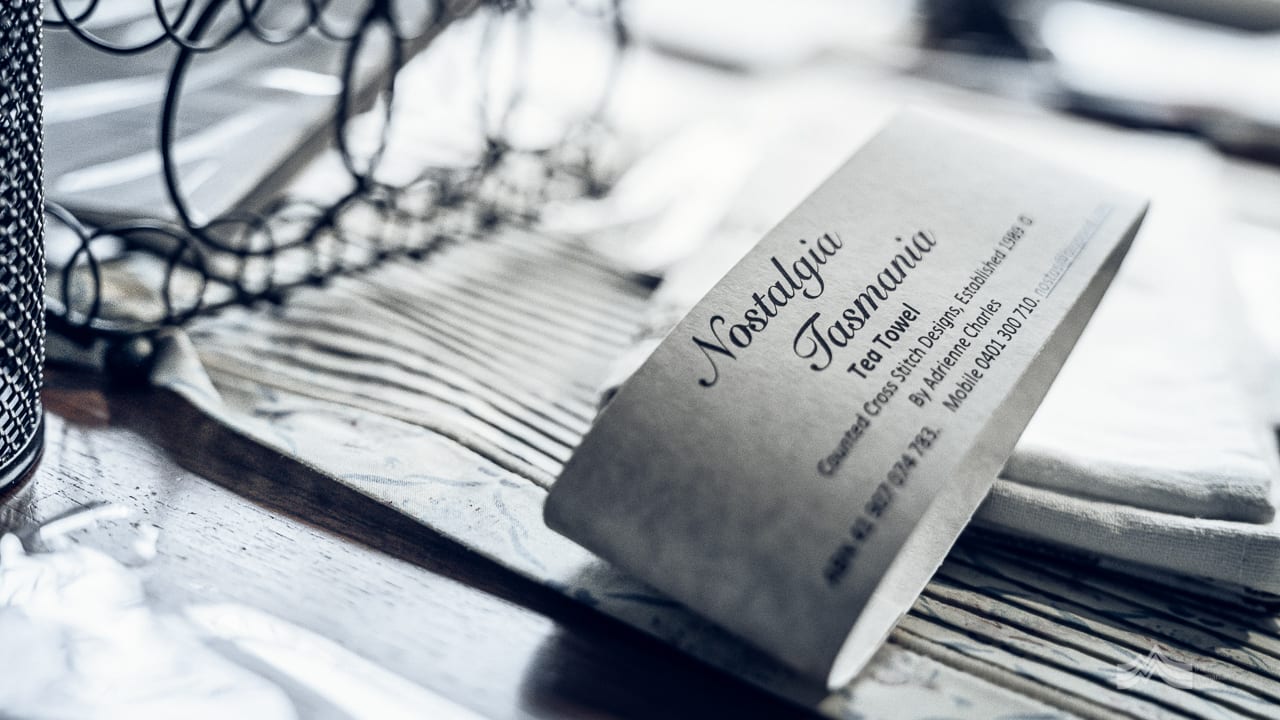 Adrienne’s design process often begins with a photograph. “I love designing each work and selecting the colours of the thread,” she explains. “I first stitch the design, then create the graph, line by line, using the colour symbols, all in pencil. I then go over the whole graph in black ink ready for the printer.”

“I love the process,” says Adrienne wistfully. “I know I could do it in half the time with a computer these days, but I really enjoy designing in this way. Each one represents hours of work, but it’s very satisfying.”

“By the end of the first year I had 12 designs completed,” says Adrienne. “I entered the collection in a design competition at Wrest Point Casino and won first place in the southern division. Since then, I’ve exhibited my work at many exhibitions and craft shows.” She continues, “A highlight was winning Best Craft Site at Agfest in 2010. Those little wins were really pleasing and made up for a business consultant telling me early on that my work ‘wouldn’t make a fare to England, but might give me a nice warm feeling’…that got me fired up and only fuelled my determination to succeed!” 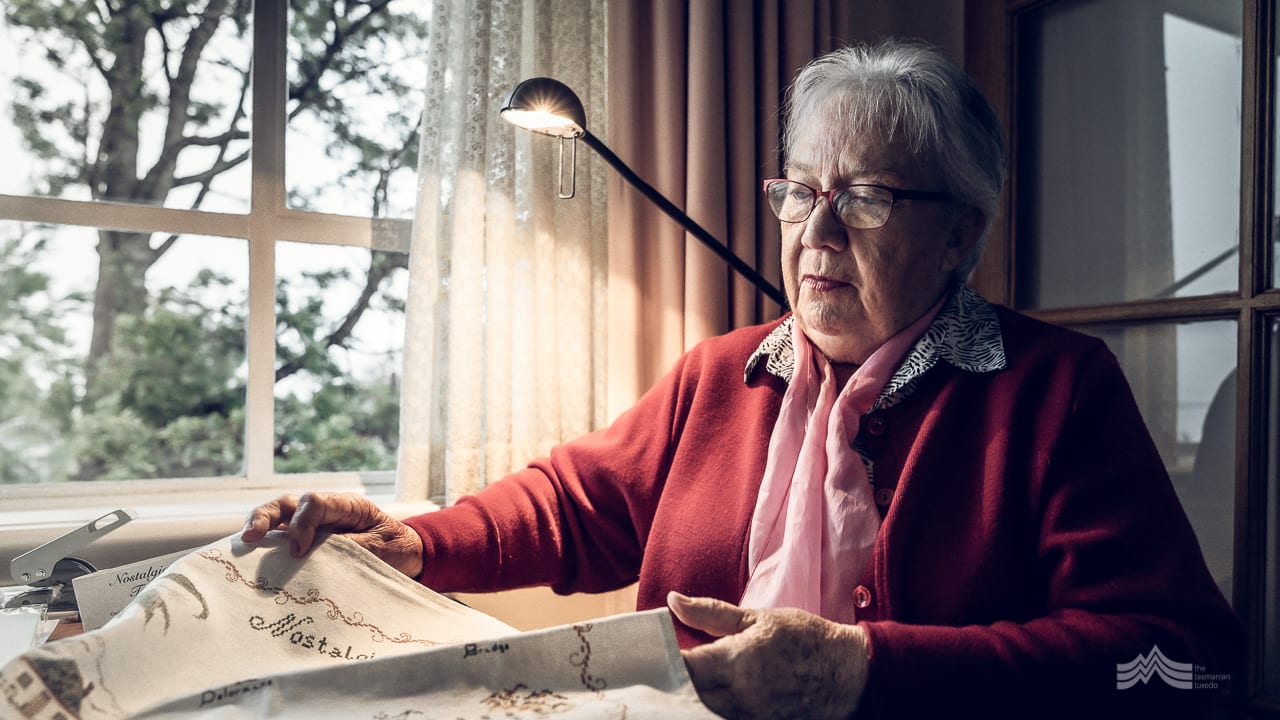 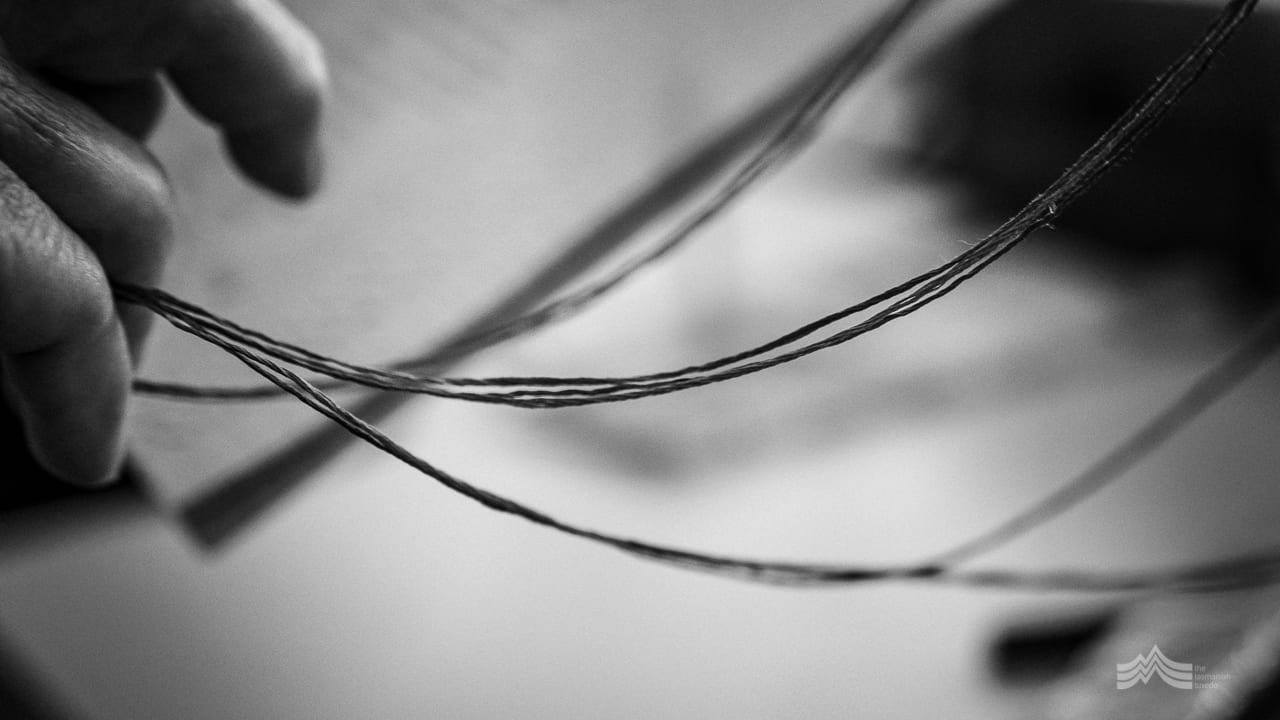 Adrienne has since sold over 21,000 counted cross stitch kits, connecting thousands of people with their own little piece of Tasmanian history. “I’ve also created two really popular collections,” she explains. “One is a collection of Tasmanian properties that were home to an amazing woman of true strength and determination, Louisa Anne Meredith. Her life in the 1800s saw her call many country properties home and she dealt with convicts, bushrangers, Aboriginal communities, bushfires, floods…hardships of many kinds, yet she still proved her tenacity in many situations. She was renowned for both her writing and artistic abilities and drew substantial inspiration from the Tasmanian bush. My sampler is a tribute to Louisa, recognising her as an early Colonial, conservationist, author, artist and a truly memorable Tasmanian.”

With countless designs to choose from, Adrienne’s collections represent a passion for needlework, but also a lifetime of interest in history and community. “I love the story that sits behind each one, and I’ve really enjoyed meeting everyone that has come across my path in the process. The friendships I’ve made with people of all ages are wonderful. It’s also been something that’s helped me on life’s journey and kept me focussed and relaxed. In fact, it’s helped me over many a tight spot in my time and I believe it has helped others as well, which is very heart warming.”

Released in 2000, Adrienne’s collection showcases Tasmanian landmarks. “It’s been a lot of hard work, but so much fun at the same time,” she says. “It’s been interesting to see what’s been most popular with people…Arthur Circus was the first real hit, followed by my design of the Richmond Bridge.”

Comfortably into her eighties, Adrienne still has the energy to create and her mind rarely sits still. “I’m not that mobile anymore, but I still manage to keep very busy. I’ve recently launched my first ever tea towel design – a project that’s been ten years in the making.” Featuring the Nostalgia Tasmania 2000 Sampler with 12 of her favourite designs, including Cradle Mountain, Hell’s Gates and a Tasmanian Blue Gum leaf, the project brings a broad smile to her face, “And I’m pretty excited that the first lot sold out quickly and I’ve now had to order more.” 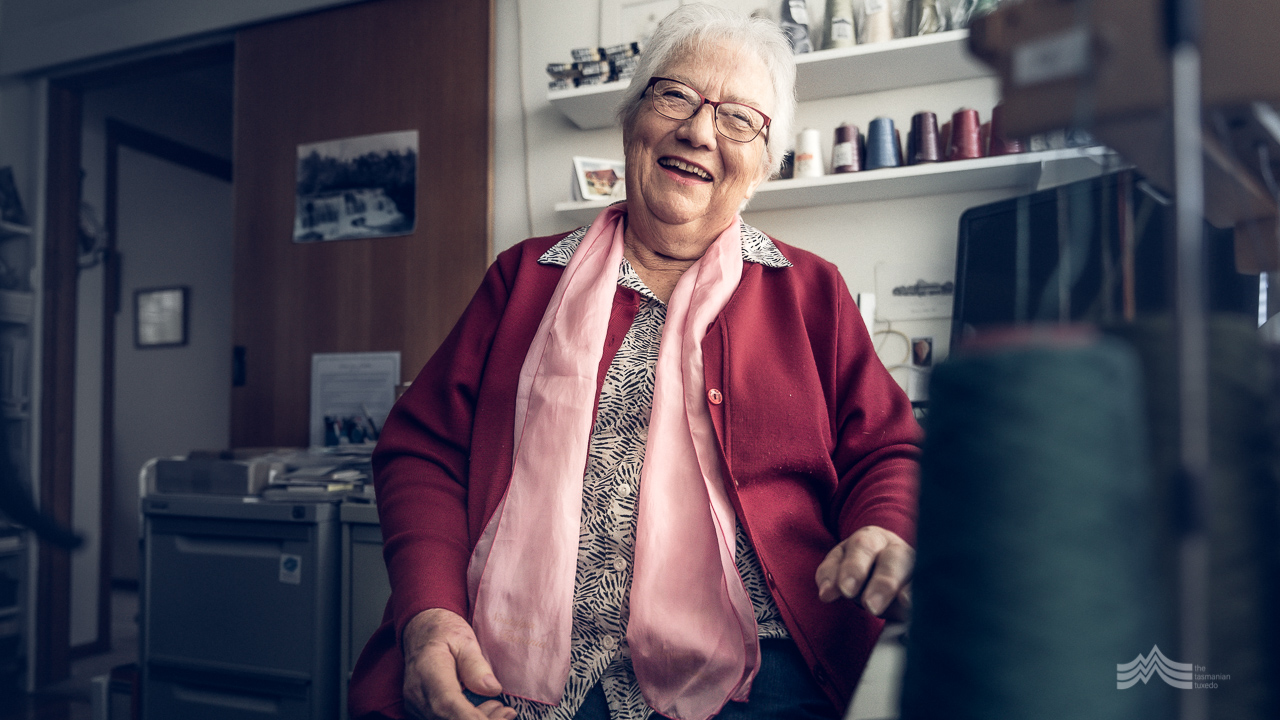 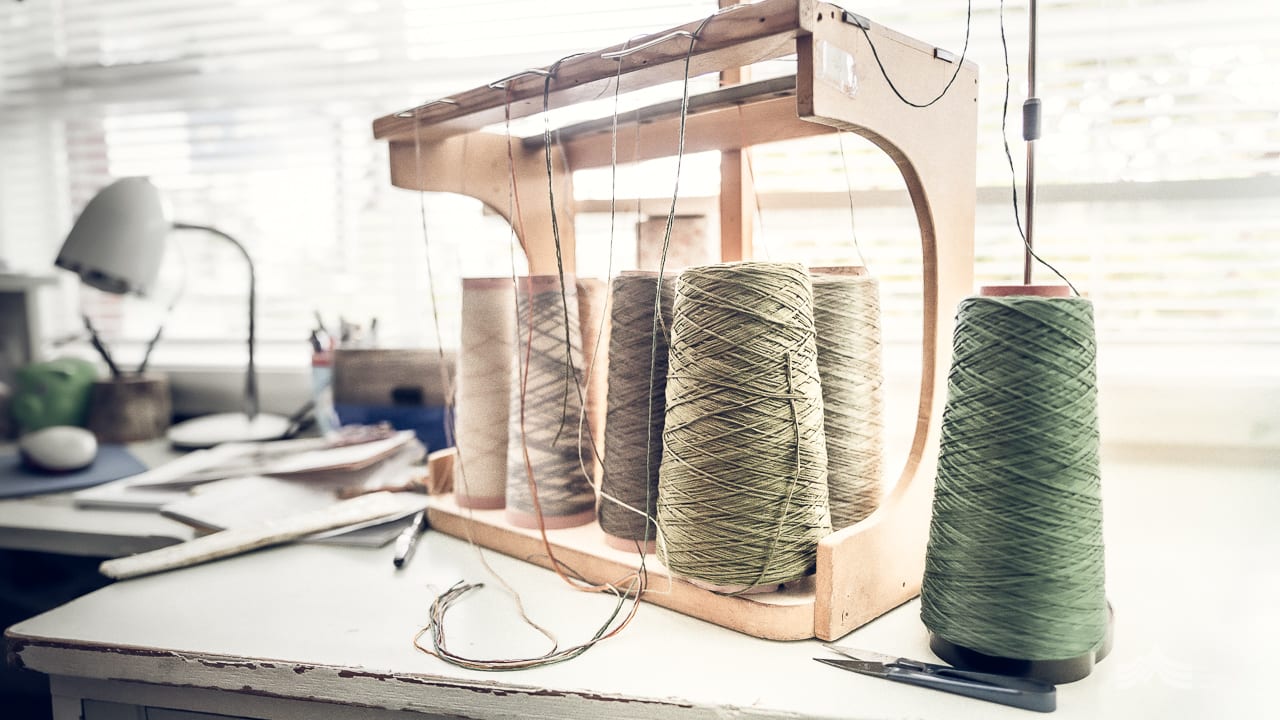 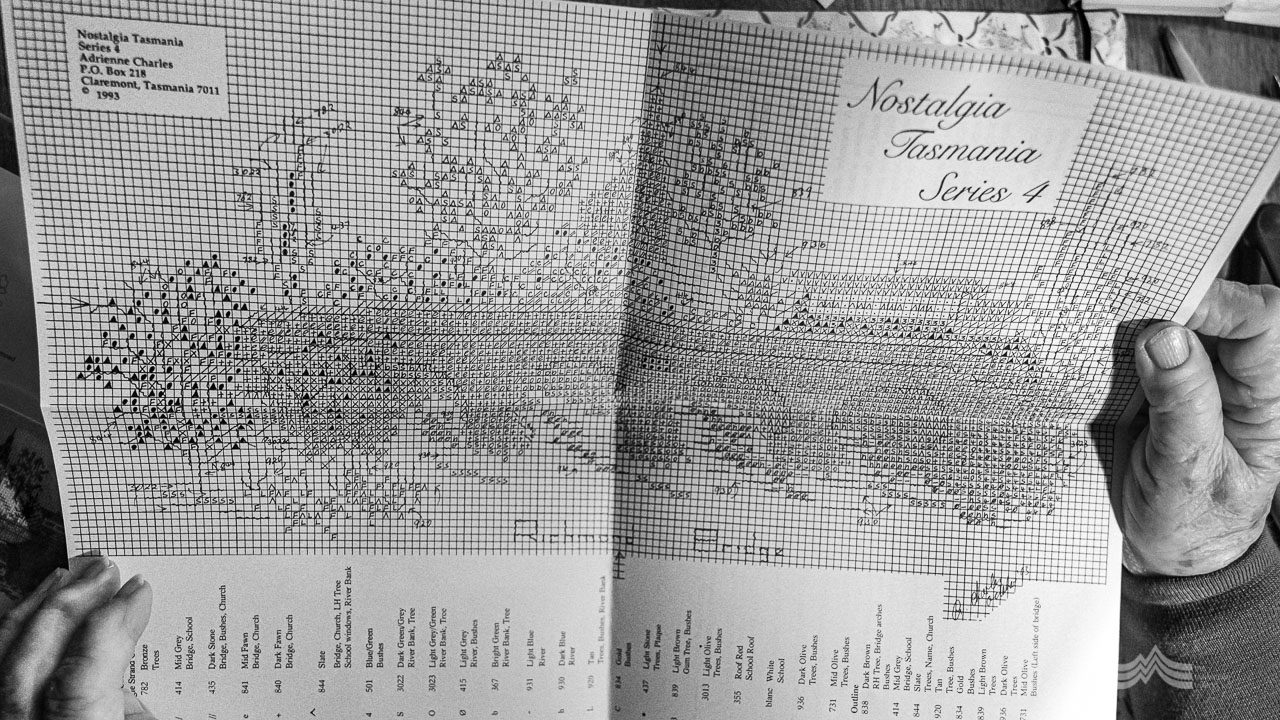 Keep up with Adrienne’s projects and order your own slice of Tassie via the Nostalgia Tasmania Facebook page.