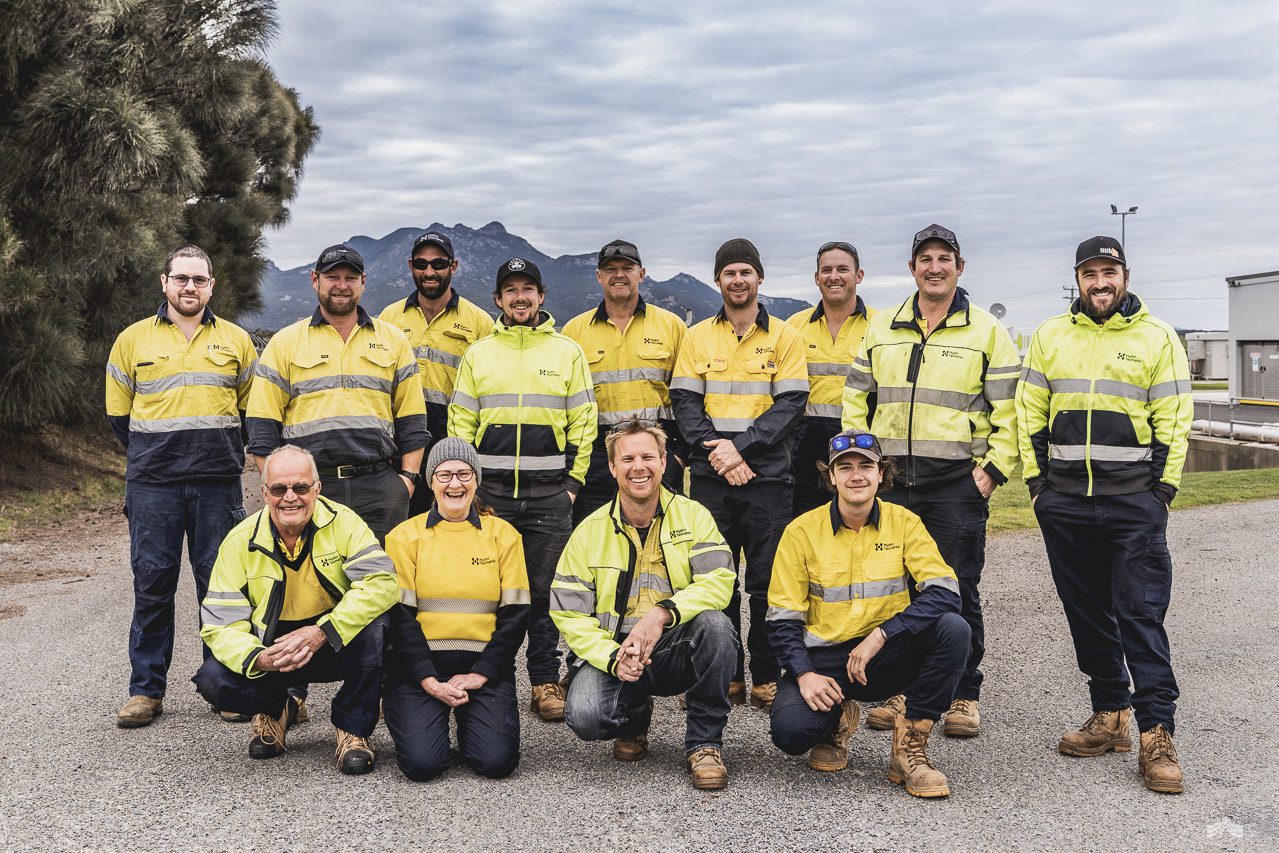 Not so long ago the warm glow of kerosene lanterns could be seen dotted across Flinders Island. Small signals that warmth and life existed beyond the wild weather that lashed the strait’s inhabitants. The latter half of the 20th Century brought change to the island – Hydro Tasmania’s arrival in the 1950s saw the creation of a power station in Whitemark. With no opportunity for hydropower on the island, an era of diesel generation arrived.

In the mid-eighties the new Flinders Island Power Station was constructed just out of town. “It supplied power for the island’s 900 residents for the next 30 years,” says Hydro Tasmania’s Production Supervisor Aronn Daw. “We’re talking 100% diesel. Four diesel engines powered the 3 megawatt station, supporting almost 7 gigawatt hours of annual customer demand. While serving its purpose, that’s an expensive exercise and the millions of litres of diesel consumed each year are not the best for the environment either. The next instalment in the story is where things get really interesting.”

In 2017, Hydro embarked on an ambitious project to overhaul energy delivery in the strait. With the support of the Australian Renewable Energy Agency, a hybrid system was developed that is capable of displacing up to 60% of the annual diesel fuel used to generate electricity on Flinders Island. The system can also operate without diesel, achieving 100% pure renewable penetration when conditions allow. Think full integration of wind, solar and diesel plus smart enabling technology including flywheel and energy storage. It’s a groundbreaking project that’s placed Tasmanian innovation firmly on the national stage – demonstrating just how communities can readily adapt and embrace clean energy. 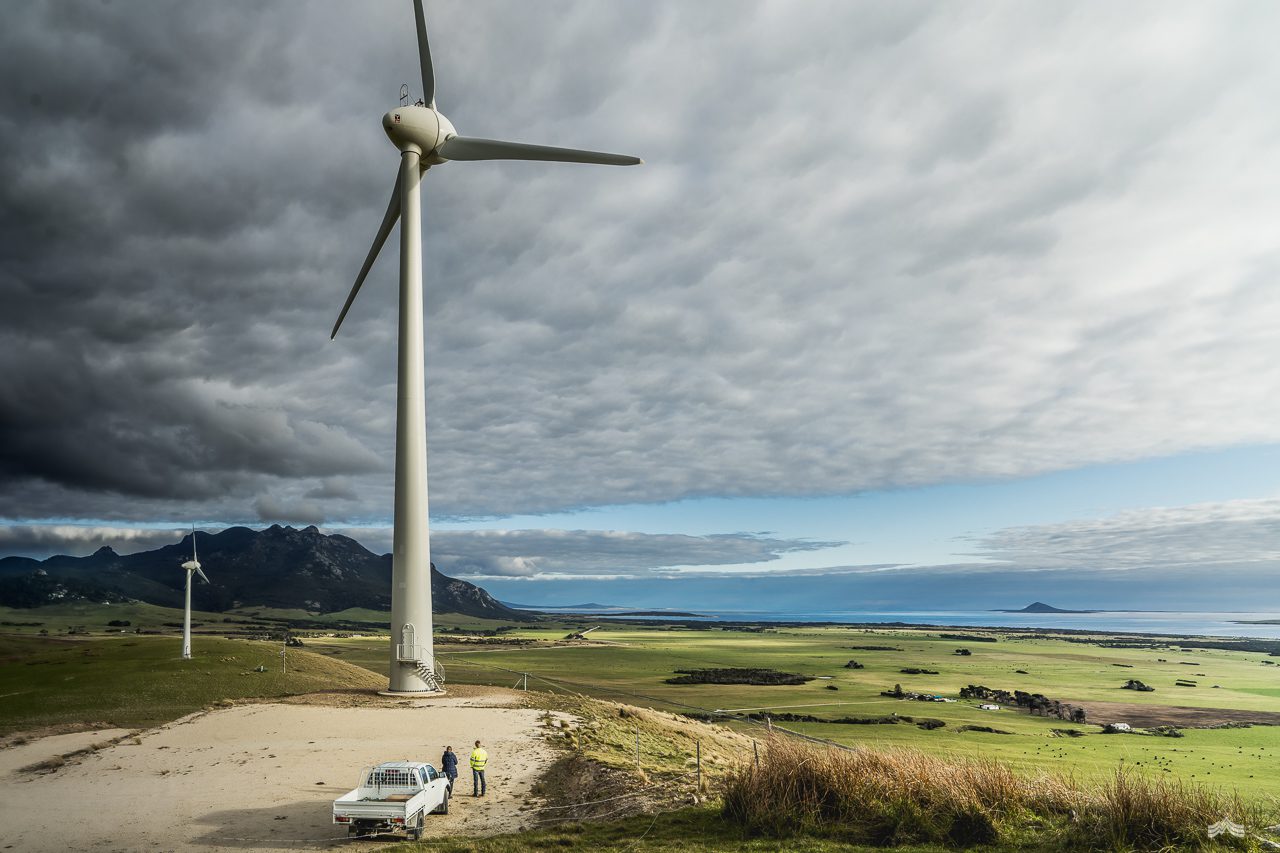 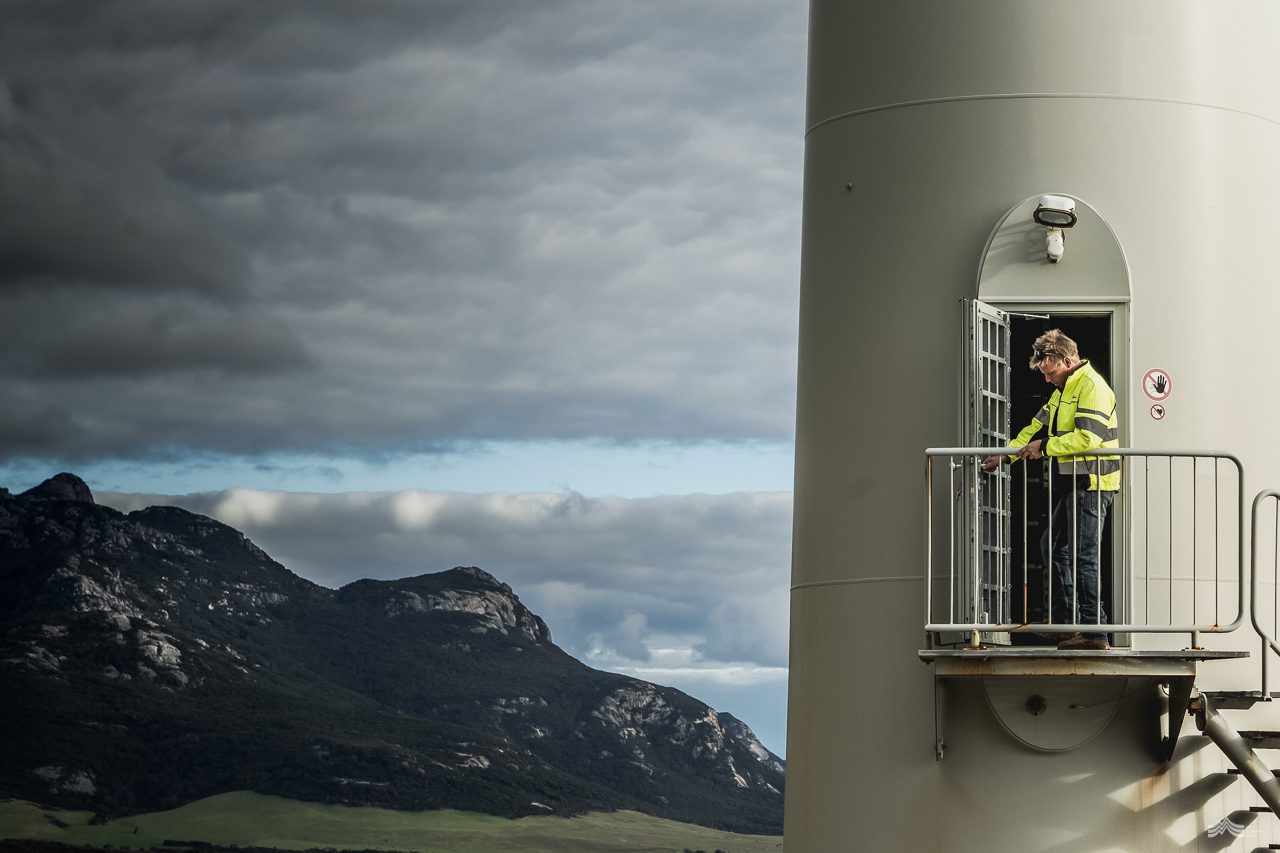 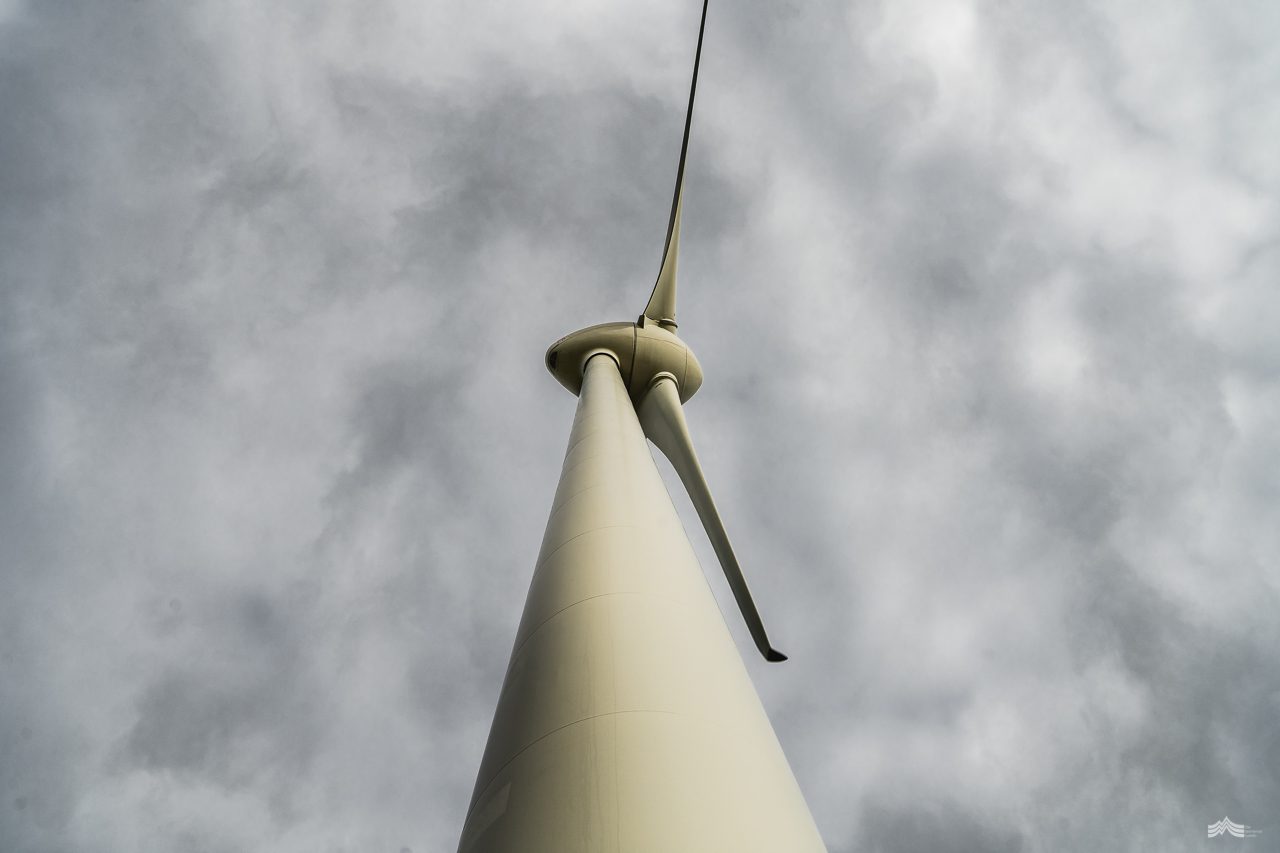 Standing beneath the base of a 40m tall wind turbine, Aronn surveys the magic carpet that stretches before him. A khaki tapestry of farms and native bushland has come to define life on Flinders. “The development, planning and commissioning of the new hybrid hub has been an amazing project to be involved in,” he agrees enthusiastically. “We not only wanted to see significant improvement in terms of renewable energy delivery and sustainability, but in the reliability of the supply too.”

The Flinders power grid winds its way across 1000 square diverse kilometres of island. Residents are spread far and wide across the biggest land mass in the Furneaux Group. Nestled in small townships, tucked down coastal tracks, overseeing rich farmland, bunkered down on the side of mountains and hidden behind expansive lagoons. It’s spectacular country to say the very least. And an ornithological paradise – aside from the roar of the elements the bird chorus is usually the only sound to be heard. The wombats, though plentiful, don’t tend to make much noise.

The Flinders Island Hybrid Energy Hub stands as a shining jewel in Hydro Tasmania’s crown. While transforming power generation in one of the most pristine places in the world, it’s also brought the locals along for the ride. Innovative software allows each of them to have the latest energy stats in the palm of their hand while out in the paddock. Hydro’s Flinders app summarises exactly what the station is generating compared to customer demand. Want to know how much renewable energy is being generated? It’s right there. One can also see at a glance key wind and solar variables, including how much solar power is being generated by customers with panels on their own properties. 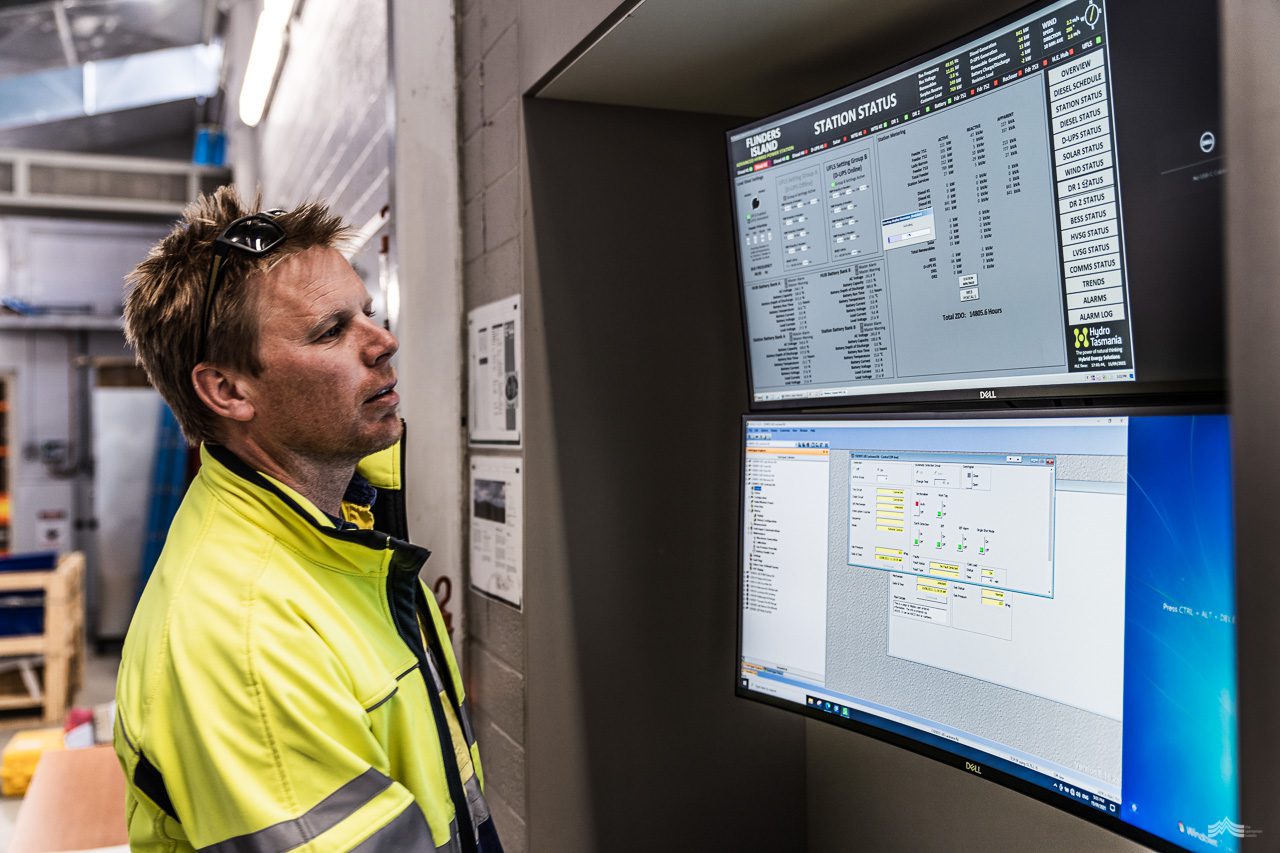 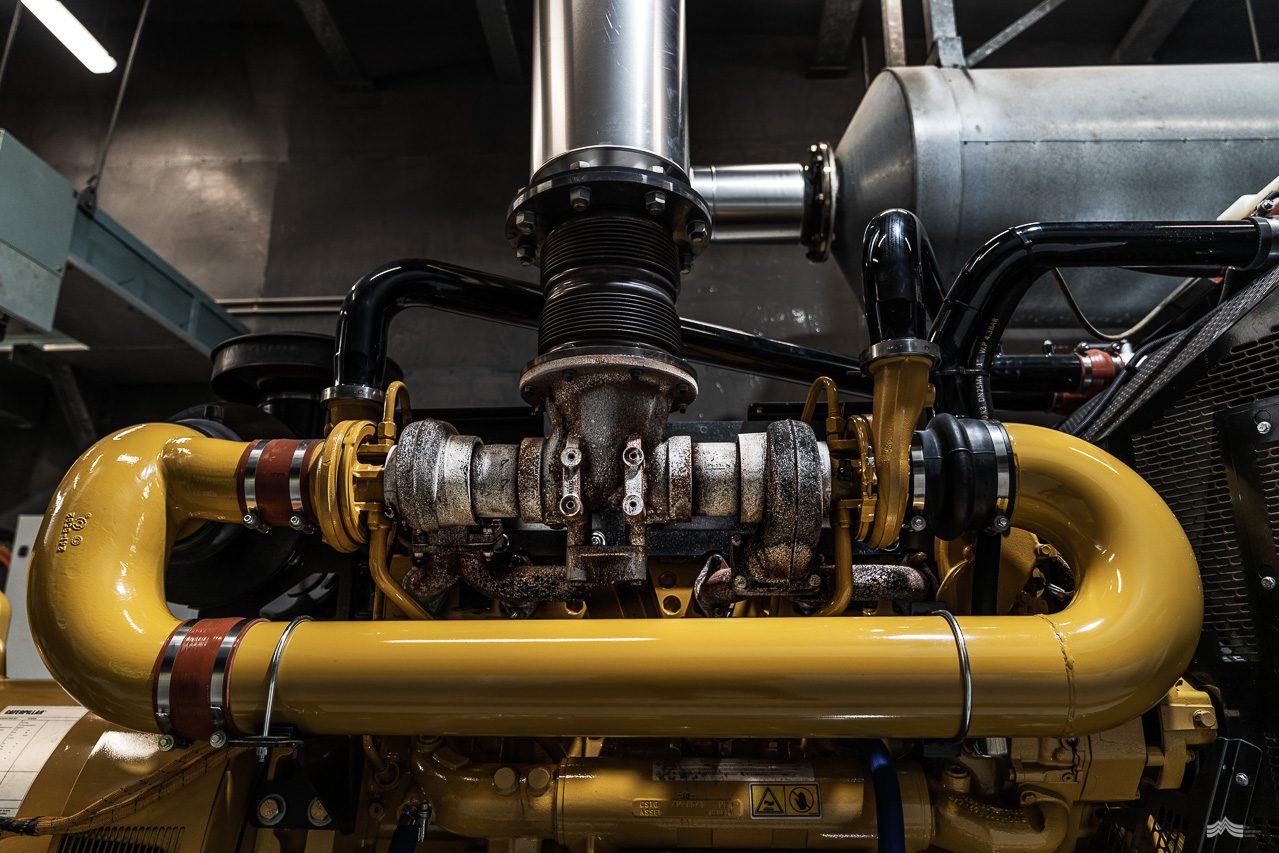 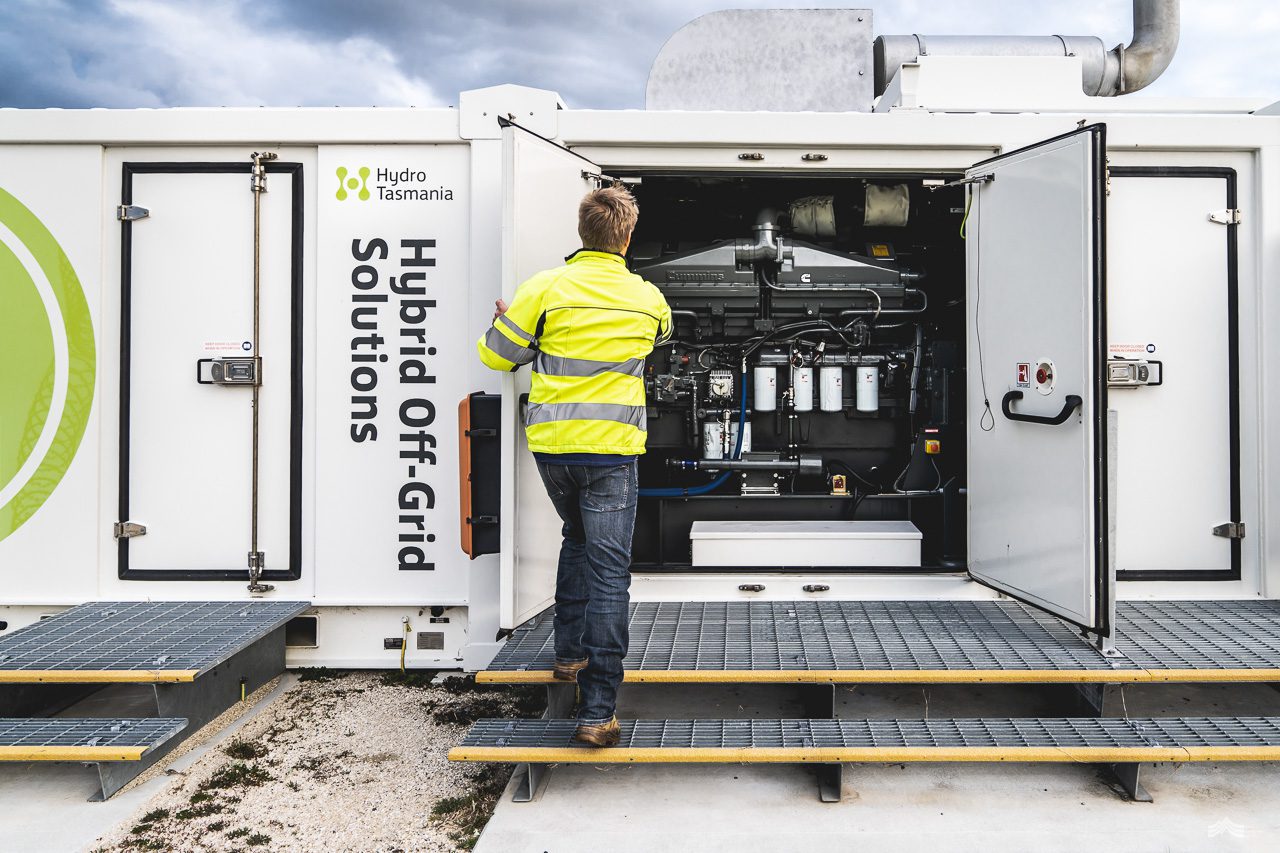 Here, timing is everything. Hydro’s hybrid technology allows multiple energy sources to be utilised as the weather dictates. There are times when the energy use peaks and an additional diesel generator is turned on. There are times when the wind and solar power see the batteries fully charged. “We can now store the excess power, and can reduce the inputs when we have a glut,” explains Aronn. “It’s flexible and responsive, and it can all happen remotely too.”

Incorporating a 900kW wind turbine and 200kW solar array into the grid was no mean feat. Hydro Tasmania designed a series of scalable modular units to house and ship all the enabling technologies to the island. The tried and true innovation developed for the strait can now also be applied to other remote communities, and possibly even used to temporarily deliver power in disaster relief situations.

“Before the hybrid model, we probably saw the power go out once a month here,” recalls Aronn. “Now, once or twice a year is the norm. We’ve not only got a far superior electricity supply, but we have invested a lot of time rectifying historic problems in the grid…we’ve fixed a substantial amount of distribution equipment, including the introduction of remotely operated switchgear…and it’s really paying off now. Having local control over the budget and to be able to spend where we experience the issues on the ground has made a very positive impact.” After a moment he adds, “Our team is very committed to making sure the community has what it needs. If there’s a problem, they’re straight onto it.” He adds with a grin, “When you’re down at the pub on a Friday night, you don’t want to have to explain the power problems​.” 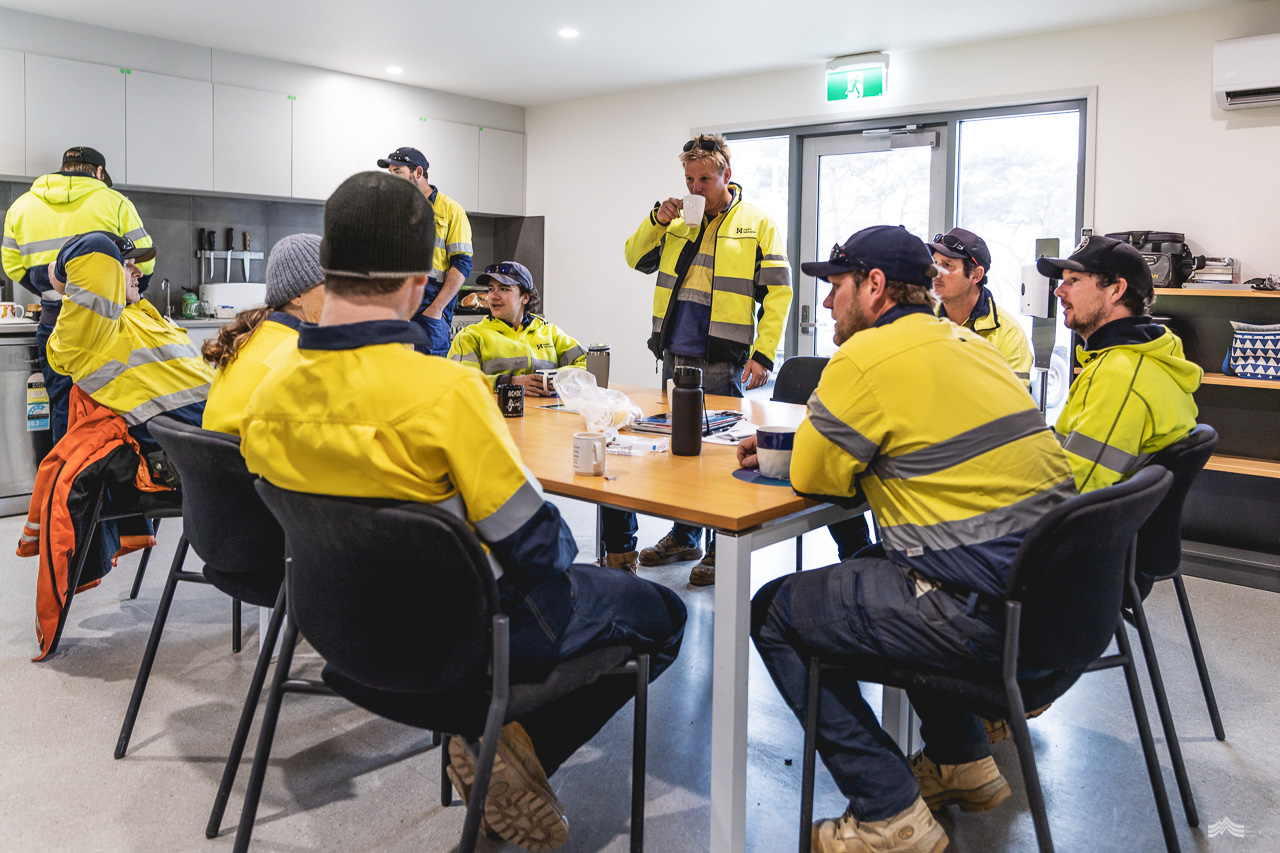 Hydro Tasmania’s closely banded team of 12 ‘Whitemark boys’ are on call to tend to the power lines and wind turbines. They include trades, fitters, linesmen, a couple of apprentices and administrative staff. It’s clear they share three things – a love of island life, a strong work ethic and a genuine desire to serve the community. Friendly banter abounds. It’s a crew defined by hard work but, as local culture dictates, there’s always time for a bit of lighthearted stirring. Many are island born and bred, often having left to complete their training and to gain experience, before bring their skills back and reinvesting in island life. Young families arrive in tow and are rewarded with the gift of a childhood blissfully roaming pristine beaches and climbing rugged mountain ranges.

“Life here is unbeatable,” agrees Aronn. “It’s not for everyone, but if you love the outdoors, being welcomed into a genuine community, and a challenge, then I couldn’t recommend it more highly.”

“One of the differences I find over here is that we’re so close to our customers,” explains Aronn. “In actual fact, we are our customers. We all live and work in this community and take real pride in what we do. I think you have to.”

Valerie Hall is the Bass Strait Island coordinator and currently the only woman on the team. Initially working remotely from Hobart, she sold up last year and relocated permanently to the island. “The opportunity arose for me to come and work here and I haven’t looked back since,” she nods, taking in the stunning sunset from Whitemark’s jetty. “At any given time I could be doing data validation, reading meters or operating our GIS program. At the end of the day it’s pretty hard to beat throwing a line in here after work. You might have to wait a bit for wind to die down, but that just makes it all the more special,” she smiles. “Evenings like this are just magic.” 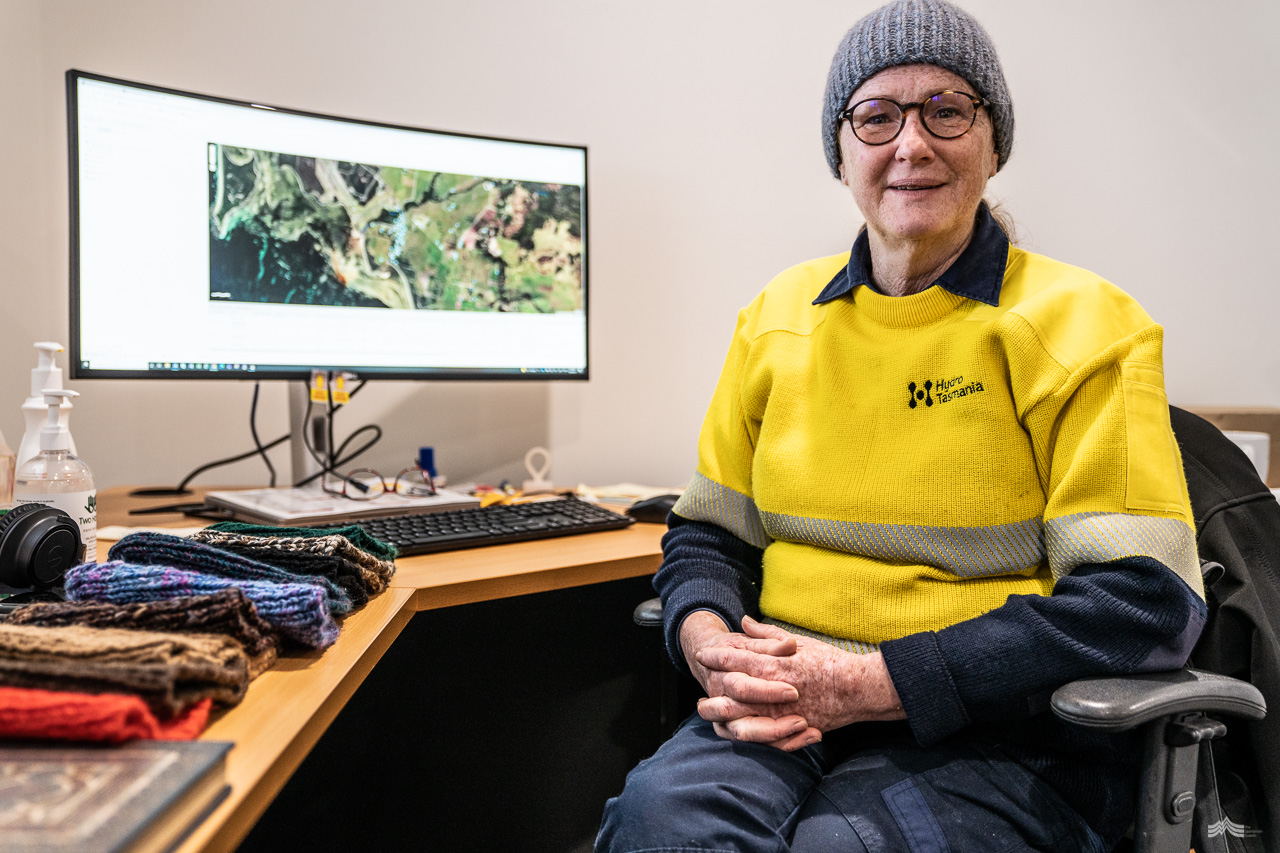 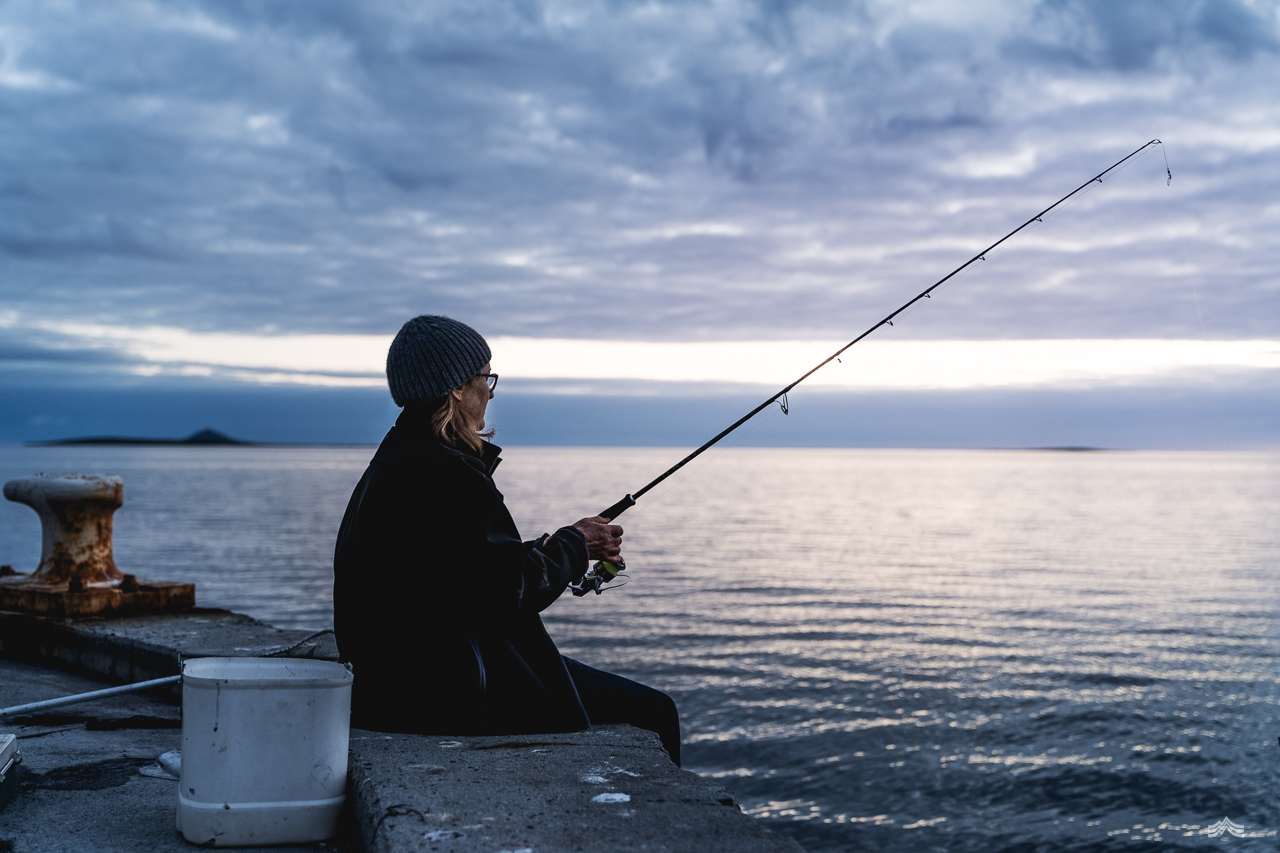 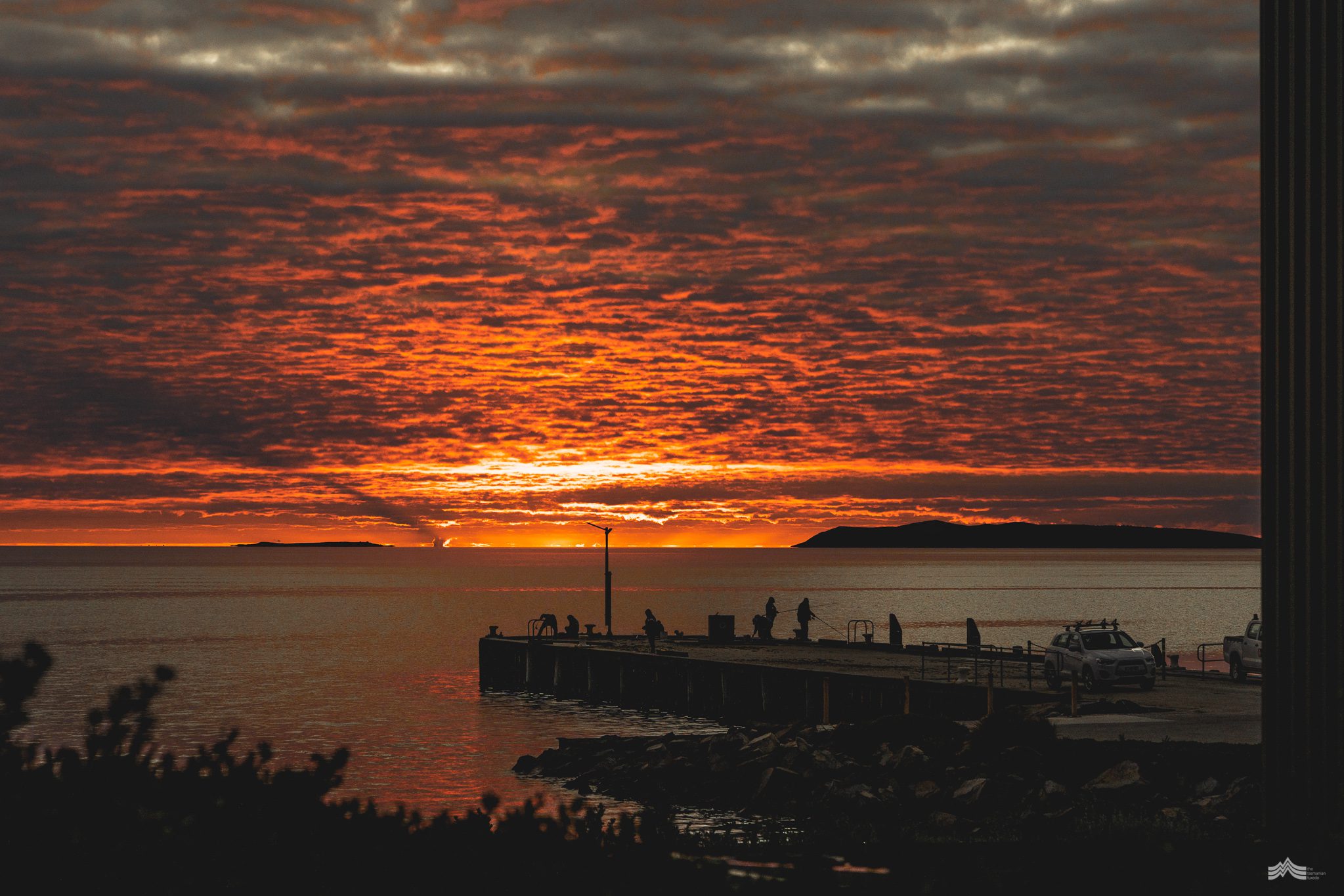 With a couple of freshly caught squid squirming at her feet, Valerie is quick to heap praise on her colleagues. “Simply a bunch of great guys,” she nods. “And in fact, when they are at their best is when there’s a crisis. Whether it be an unplanned outage or some sort of local emergency, they are like a well-oiled machine. They all know their part and get straight down to ensuring the power is back on as quickly as possible.” Valerie adds, “The sense of community spirit is very strong too. Lots of them hold volunteer roles within the community and will be the first to put their hands up when something’s needed. The professionalism they continually demonstrate is amazing. I truly take my hat off to them.”

Valerie has embraced the community culture that Flinders is renowned for. Her magic wand comes in the form of knitting needles and she’s quick to whip up a beanie for anyone that needs one. “It’s just something I like to do,” she says. “I’ve usually got a beanie on as I have a cold head. But the knitting ramped up when the CWA put out a call for help. I’ve now knitted lots for the boys here and their kids too. If it’s something that helps others out, then that’s a bonus.” 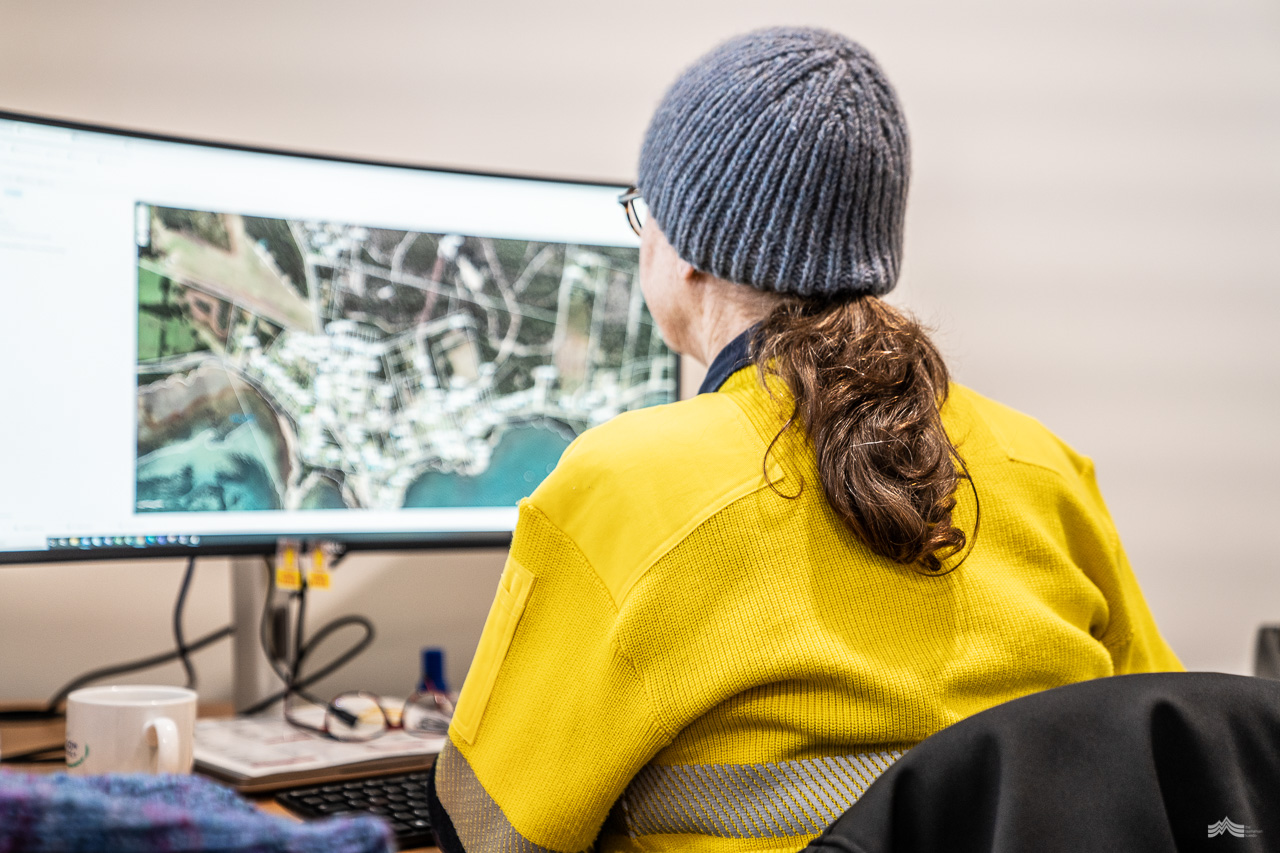 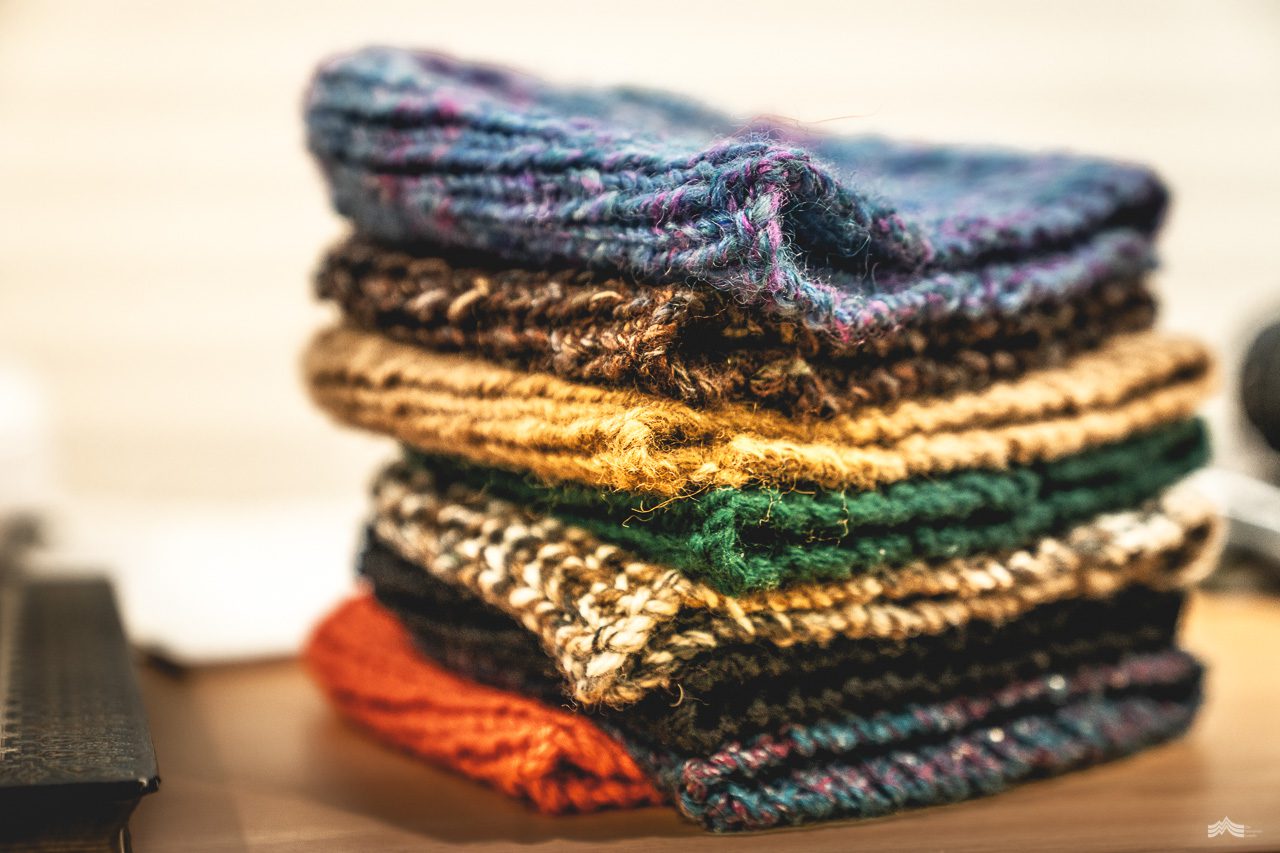 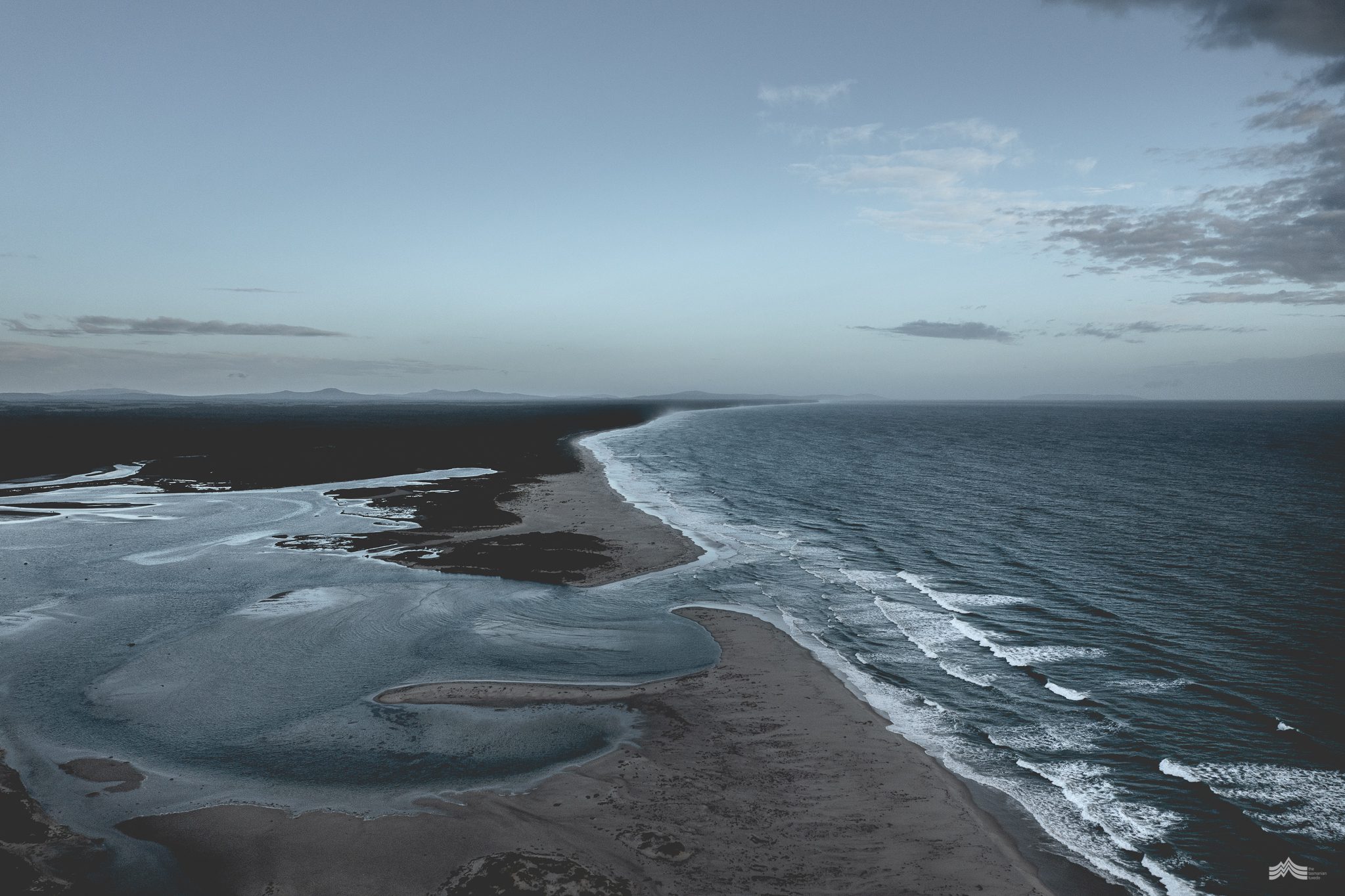 Sitting amid one of the world’s most treacherous stretches of water, Flinders presents a myriad of challenges for this young and energetic team. Aronn recalls 188km/hour winds not so long ago. “That’s category 2 cyclone conditions,” he explains. “It gives you an idea of the unexpected problems that the elements can sometimes throw at us.”

“Over here 80–100km/hour winds can create issues pretty quickly,” explains Aronn. “Those days can be long, but they are offset very quickly when the great weather arrives.” With a grin he adds, “When the weather’s rough I’m happy to be working anyway. But when Flinders turns on a magic day, it’s usually very quiet for us. Hello fishing, diving and exploring.”

An electrician by trade, both a linesmen’s ticket and sound experience as a power station operator under his belt, Aronn has risen quietly through the Hydro’s management ranks. He’s a bright example of the capable hands in which Hydro is placing its future. “There are just so many good opportunities to be had here. On any given day I can be climbing a wind turbine, servicing a diesel engine, reading a meter or in the office catching up with reporting,” says Aronn. “Whether it’s maintaining 400km of powerlines, overseeing the remote operations software or running our suite of diesel generators…when things don’t go as expected, that’s when our people really rise to the fore. They’re a highly trained group with such a diverse set of skills. You really see that in action when an issue presents itself.”

It’s not often you hear employees speak highly of safety guidelines, but that happens here too. “This is one of those places you know that if you stick to the rules, you’ll stay safe,” says Aronn. “And working with high voltage, there are no second chances. Hydro Tasmania maintains such a good safety program…they are constantly investing and no limits are placed on safety costs, which is great peace of mind for us and our families.”

“One of the things Hydro does really well is look after its people,” nods Aronn. “They’ve done nothing but extend opportunities to me and I’ll always be grateful for that. It’s a fantastic, positive culture to be a part of and I’m grateful that they notice people who really put in.”

Wandering the island, it’s not hard to be envious of the lifestyle. “Fishing, boating, barbeques on the beach…that’s Flinders really,” agrees Aronn. “Who wouldn’t want to be a part of it? If you accept it for what it is, and don’t try to change it, you’ll reap huge rewards. People here are genuine and are protective of what we have, and for good reason.”

Ironically, Aronn has become a victim of the team’s success. “I guess the one down side is that now we have less issues, it means less power outages at home. I kind of like getting out all the candles and sitting by the fire with a bottle of red. The kids love those times too…classic family moments huddled together listening to the weather raging outside.”

Giving the ‘Flinders wave’ to a passing motorist is mandatory on the island and a Hydro vehicle is no exception. They’re the first to acknowledge you with that classic lift of the finger. It’s more than just a gesture of greeting, it’s an understated symbol of community. 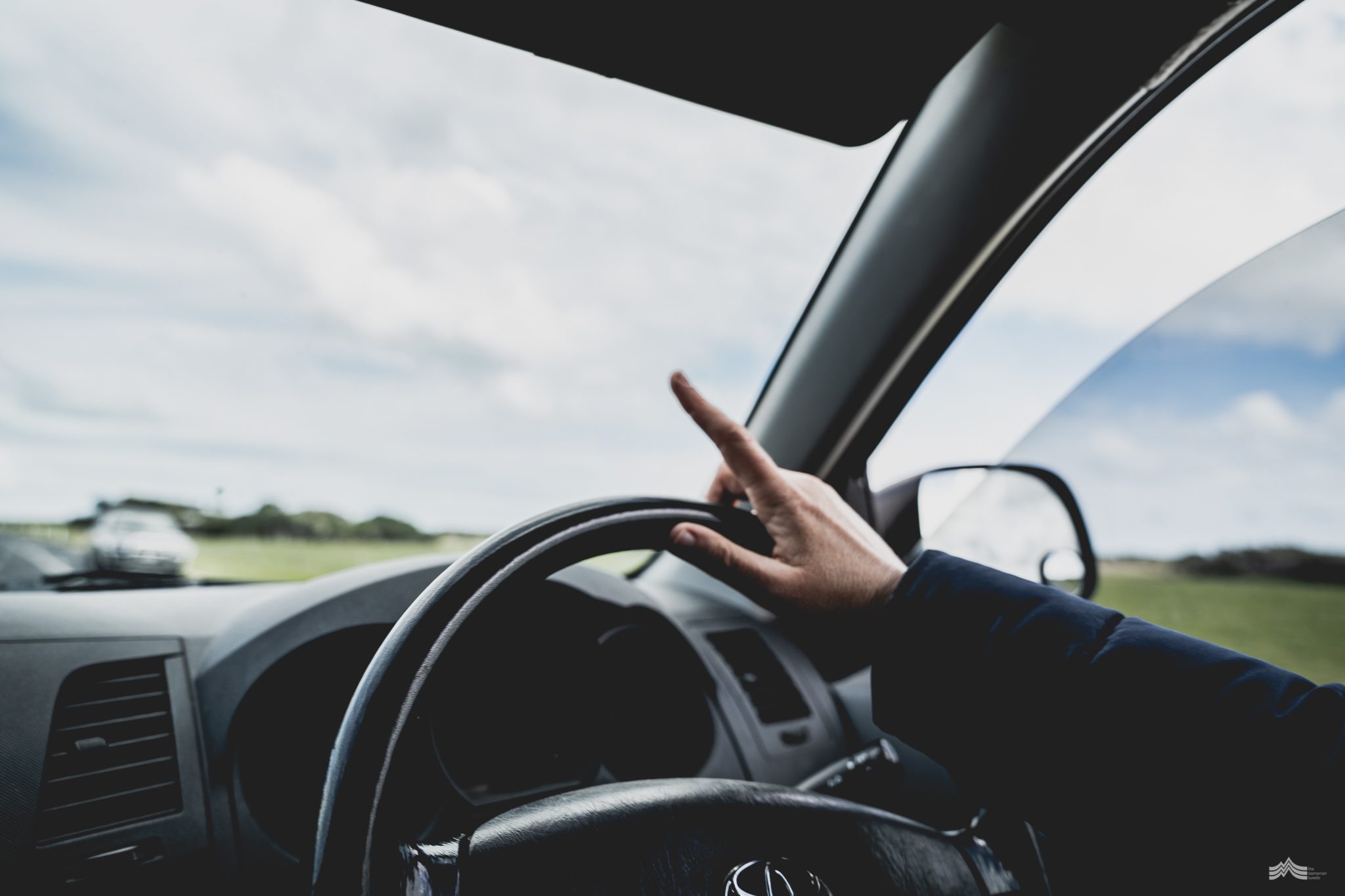 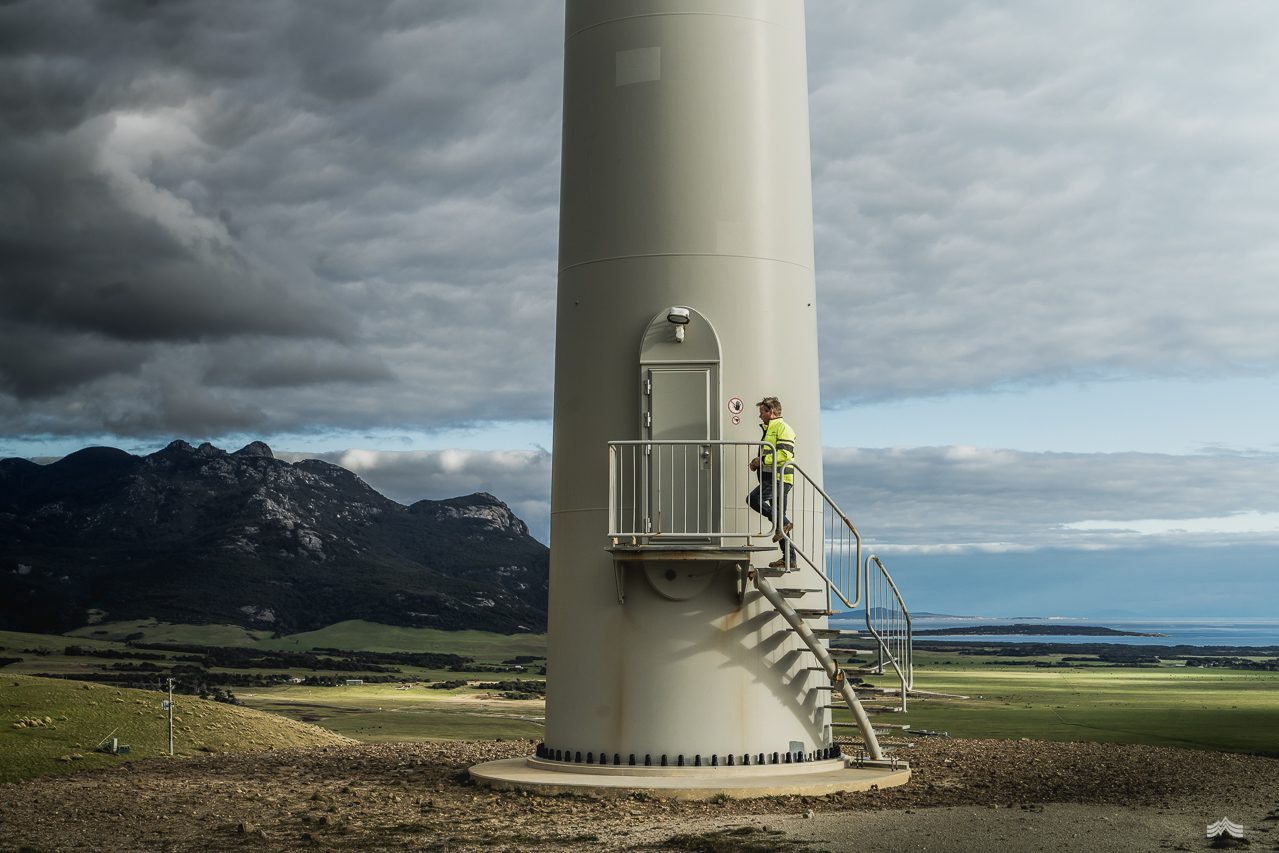 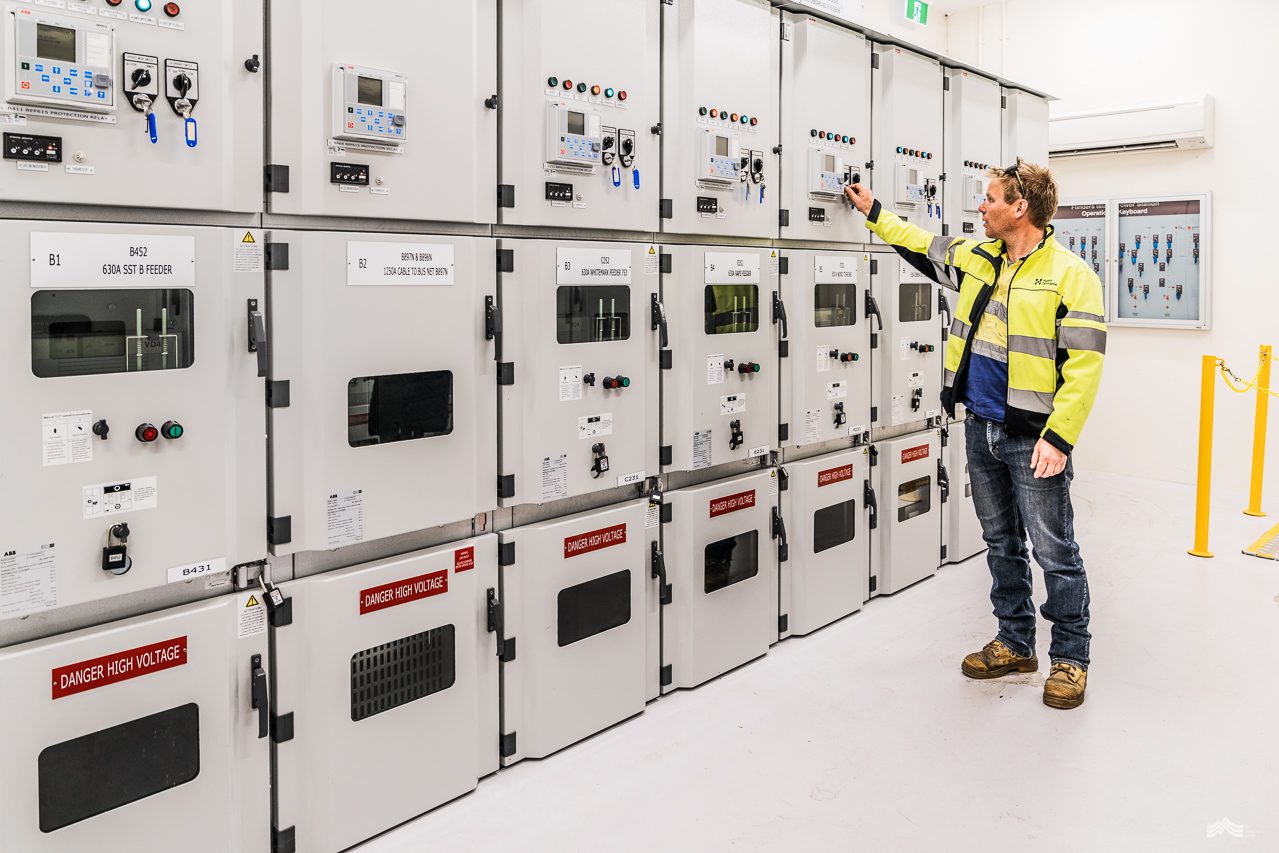 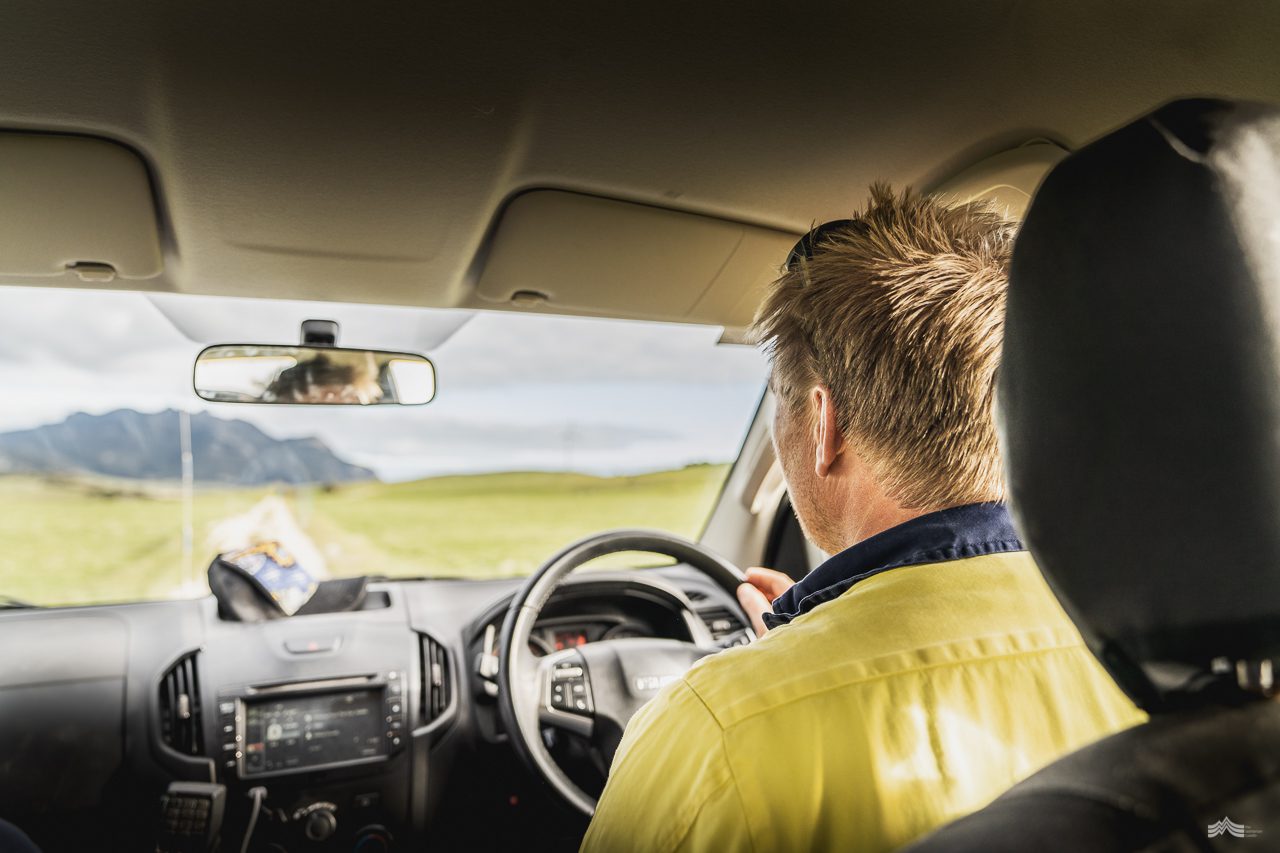 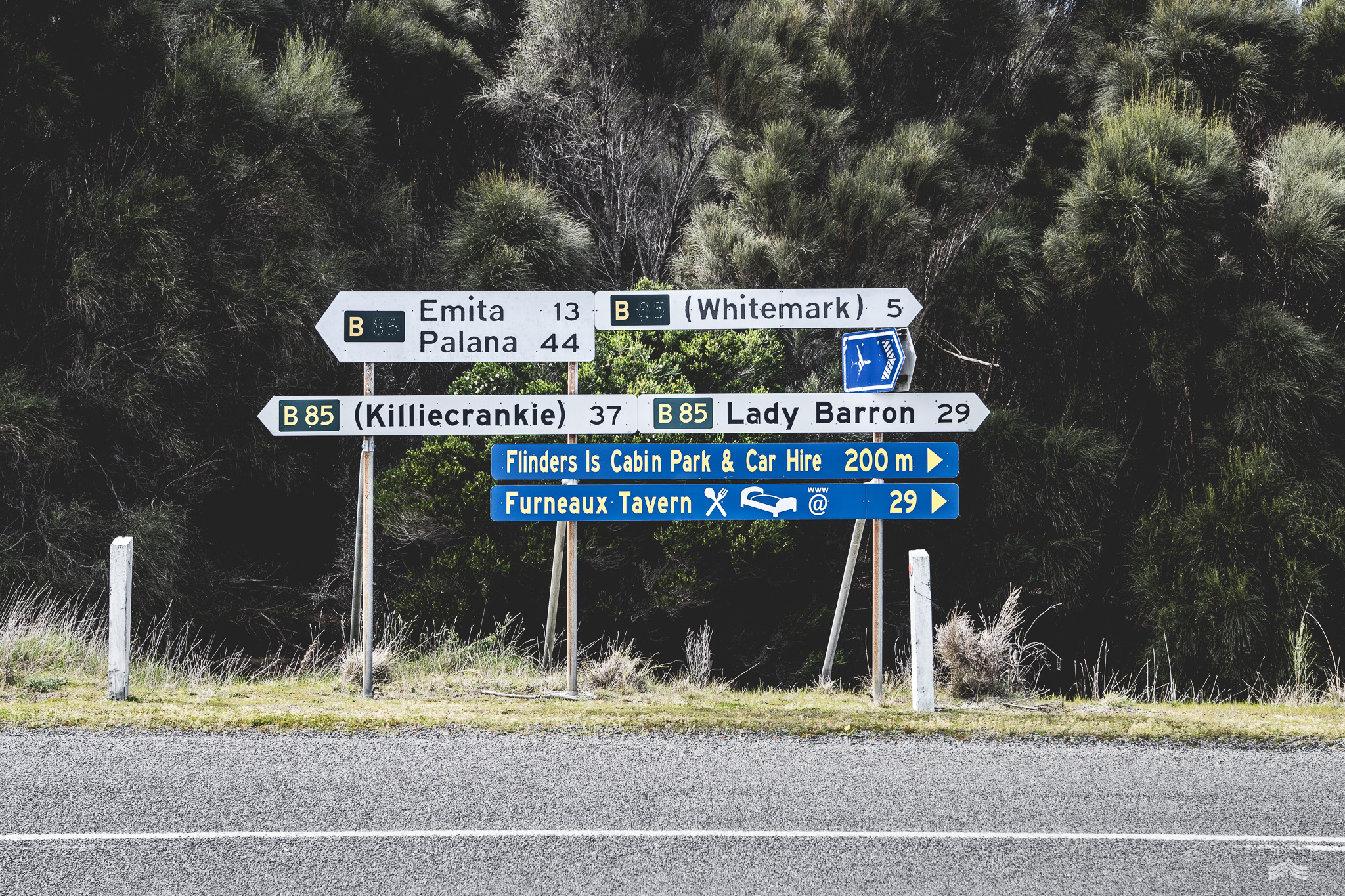 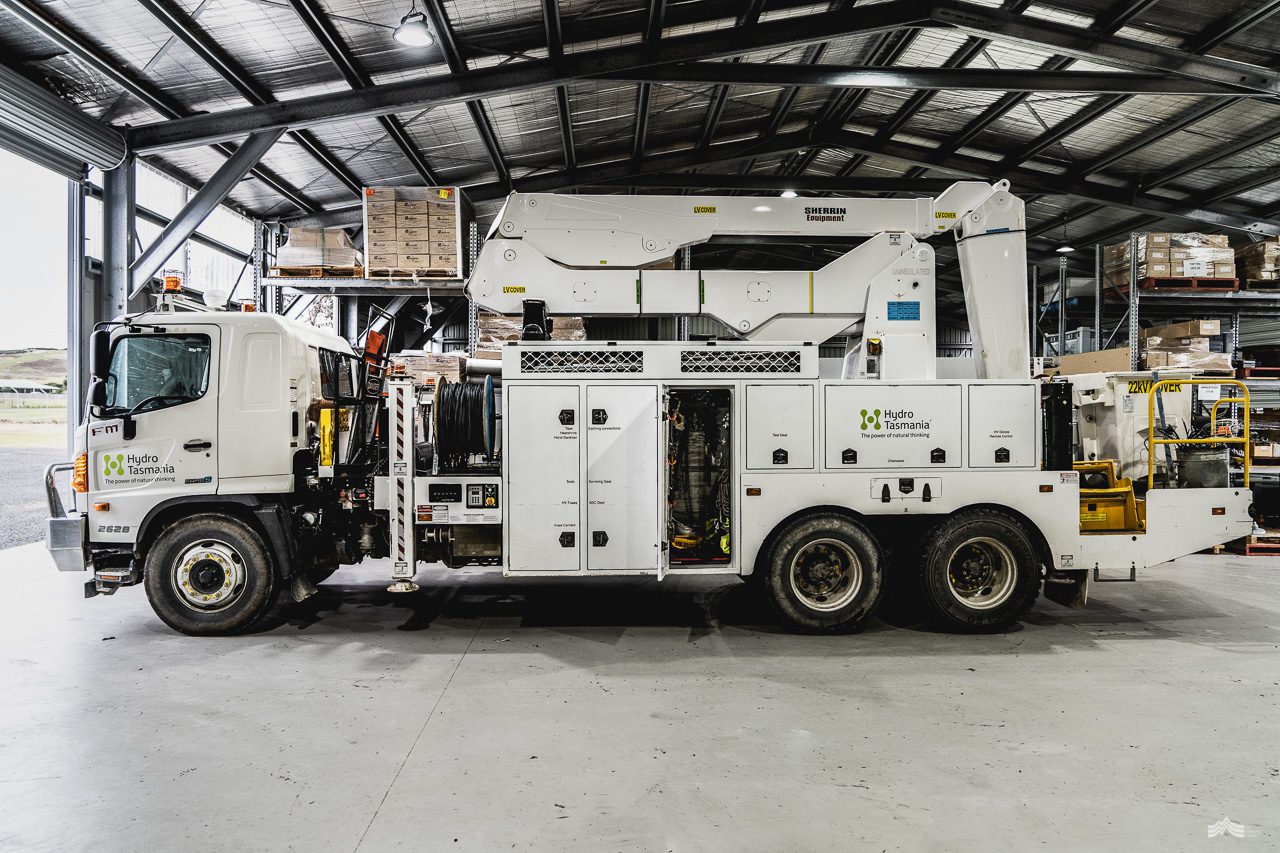 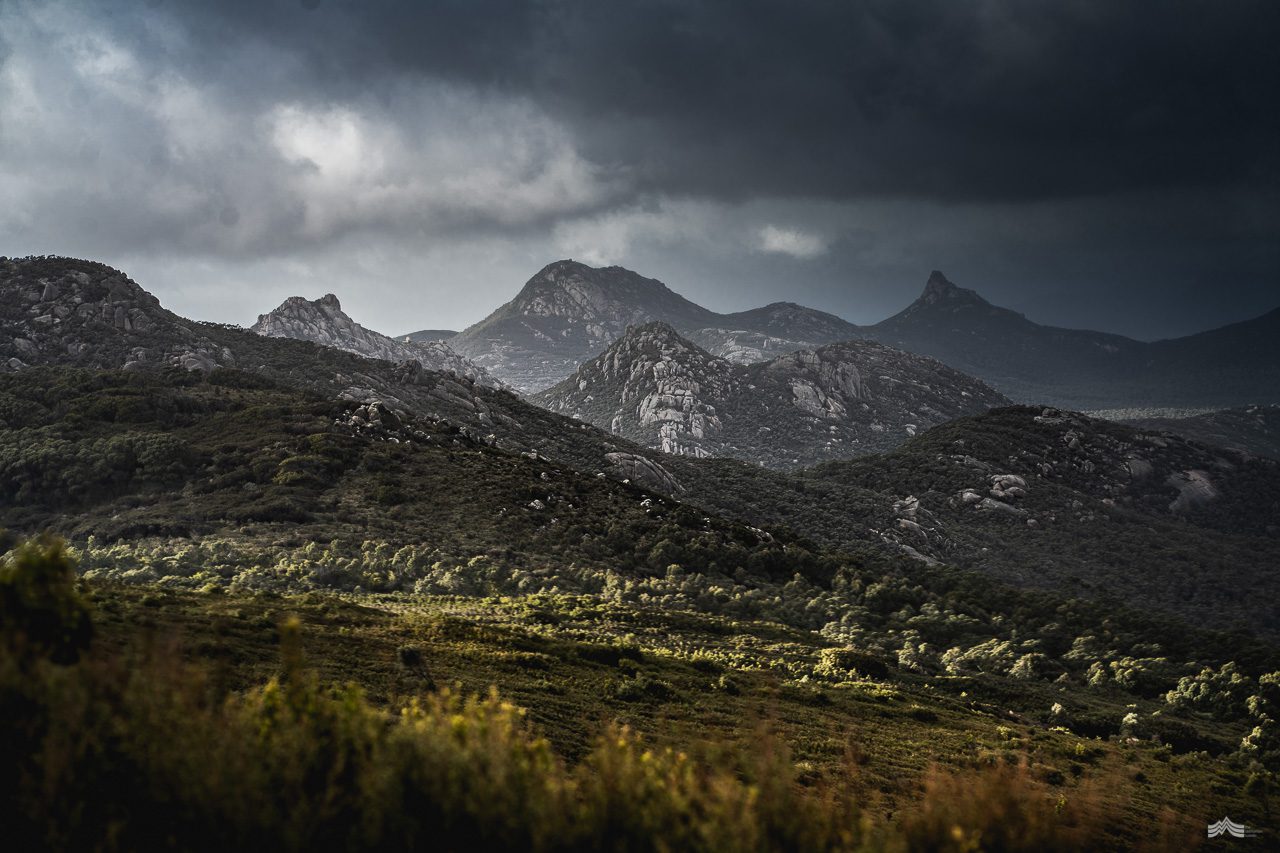 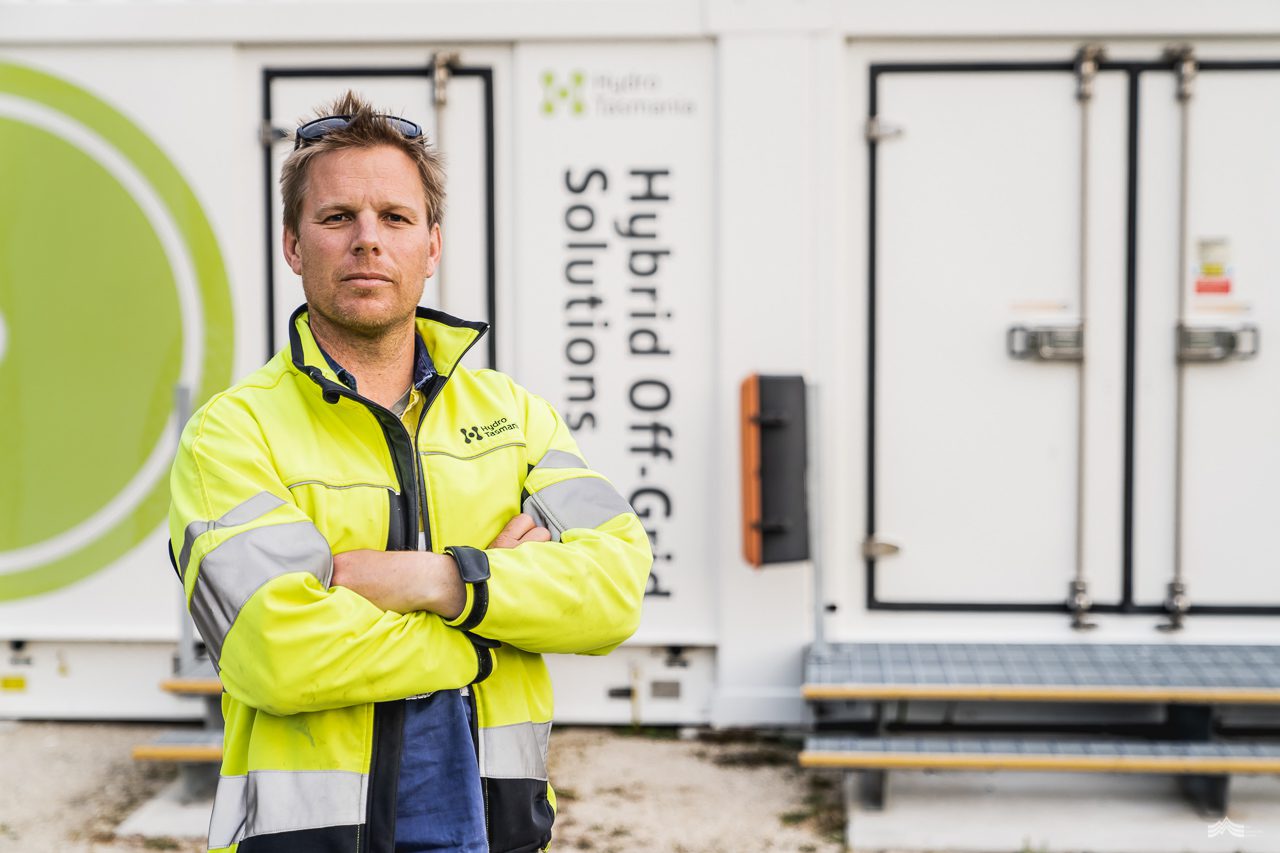