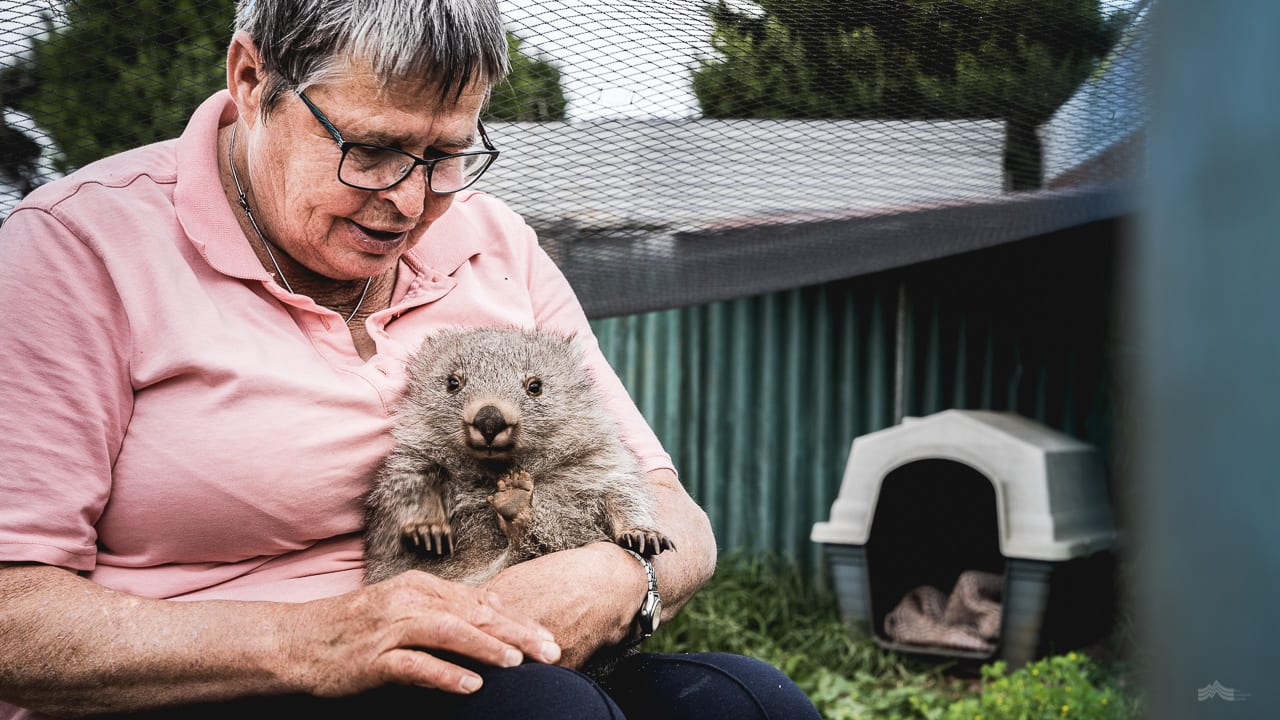 Flinders Island is breathtakingly beautiful. Holding ground in the middle of Bass Strait, this largest of the islands in the Furneaux Group sits directly on the 40th parallel. It is a place of wild isolation, wild beauty and wild spirit. A population of less than 1000 means that the wildlife far outnumbers the island’s human inhabitants. Mammals such as wallabies, possums, potoroos, pademelons and wombats are gloriously plentiful.

The gentle light of dawn and dusk draws prolific numbers of animals to the roadside to graze. Not being well versed in traffic etiquette, they sadly keep the roadkill deaths on Flinders perilously high. Even whilst proceeding slowly, drivers are challenged to avoid multiple collisions each night.

A wisdom of wombats. That’s the collective noun for a group of these short-legged, muscular marsupials. And it’s exactly what you’ll find at Kate Mooney’s place. Young wombats come directly to her from across the island – the tragic aftermath of their mothers meeting their doom on the road. 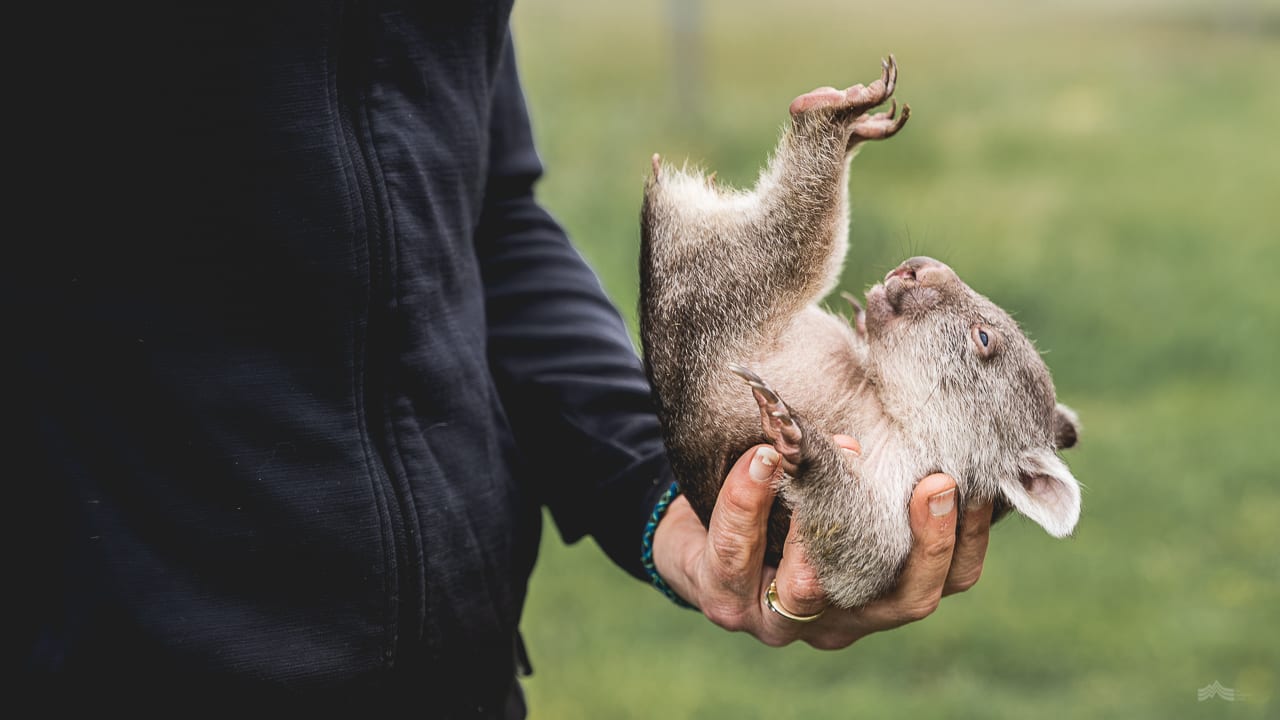 Kate was handed her first charge some 26 years ago. A baby wombat found on the very road leading to her property. “That first one was Batsky and he was very special,” Kate recalls. “But there’s been a lot more since him…that was a long time ago now.”

Over the past quarter of a century, Kate has only been without a wombat for six weeks. Indeed, she’s raised an estimated 140 orphans in her time and boasts a success rate of around 75%.  “There was a short period in there when I just didn’t have any.” She adds with a laugh, “I knew I was in trouble when I started stalking baby wombats and their mothers would hurry them away from me.”

Nestled beneath a stand of towering pines, Kate’s home is best described as wombat heaven. Over 100 acres of rolling green hills provide ideal habitat for her hairy charges and plenty of space for territorial hustles. It’s the ultimate marsupial lawn. A low ridge offers protection from the prevailing westerly winds – welcome shelter from the relentless buffeting of the roaring forties – and views of the three rocky Patriarchs beyond are nothing short of spectacular. 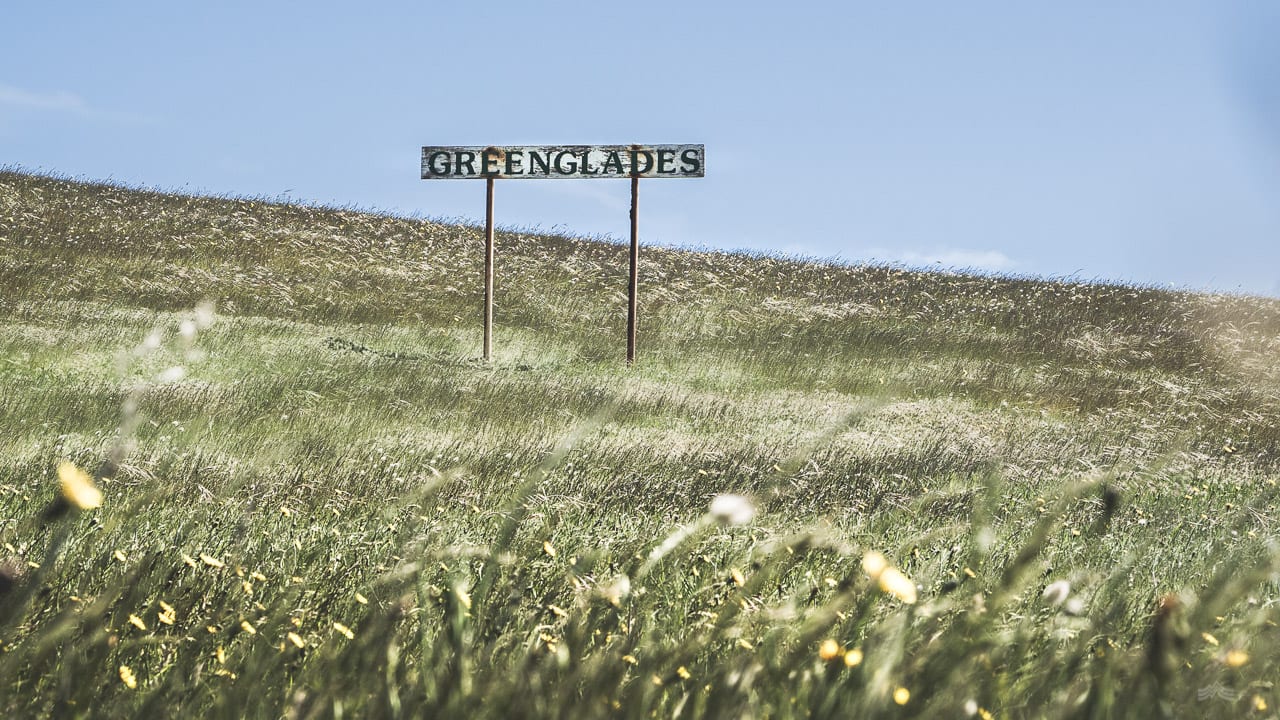 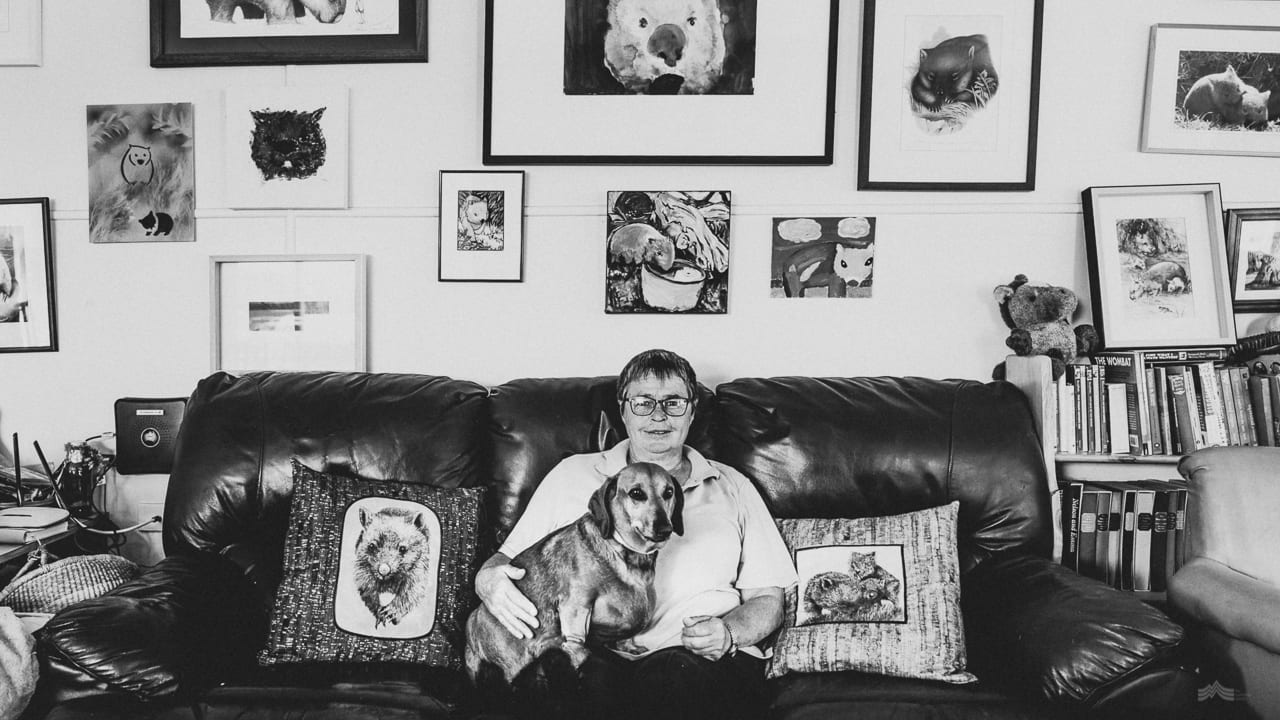 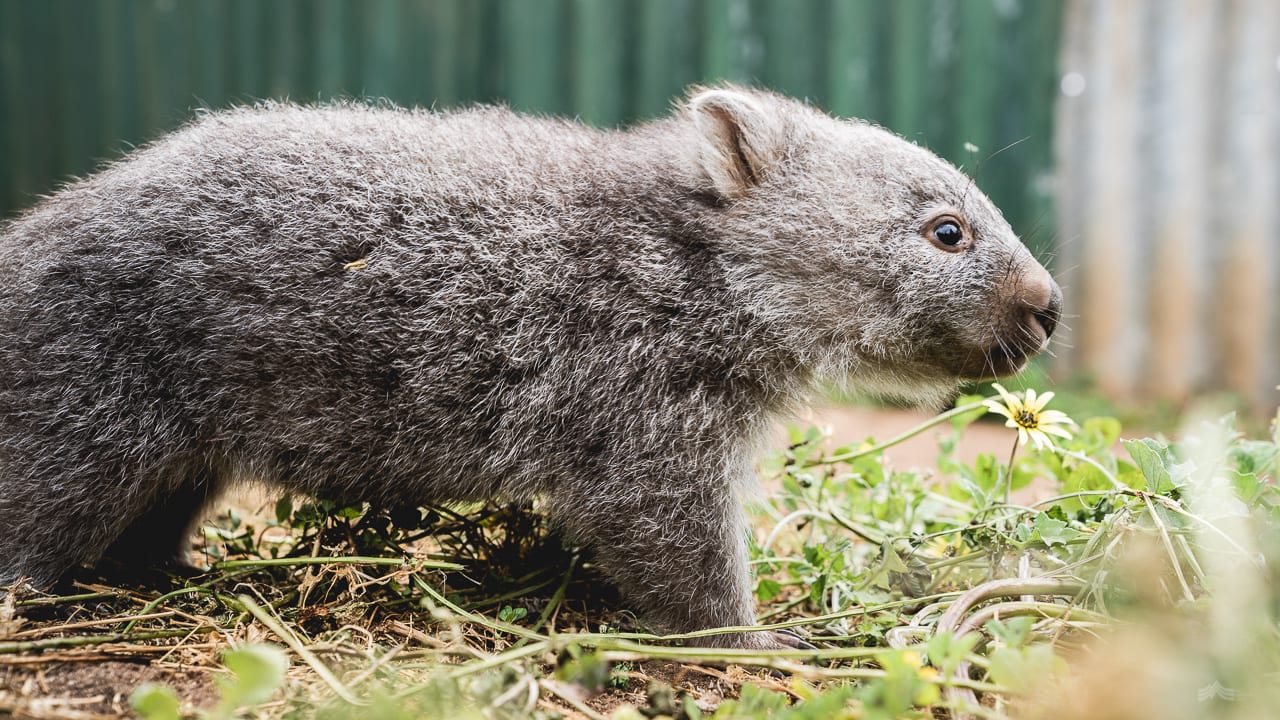 Kate’s homely farmhouse is devoted to these characterful quadrupeds. Luckily she’s a multitasker from way back. The delightful tang of simmering tomato relish hangs in the air as she settles herself in the lounge room, a brewing pot of tea at the ready. From her comfy throne, an arm chair that belonged to her dear mother, Kate contends with up to 10 babies at any given time. “They’re curious creatures,” she explains, as one scurries across her lap. “And very smart. The myth of the muddleheaded wombat is exactly that, a myth.” Kate’s a straight talker who tells it how it is.

From tiny babies devoid of fur, to older more robust individuals, Kate accepts them all. Tumbling out of a sack at her feet come three tiny wombats, each around the size of a small kitten. “I have less patience with the little ones though,” she admits, “They require bottle feeding four to five times a day and can appear to be doing very well and then suddenly take a turn for the worse. I certainly do what I can, but sometimes they just don’t pull through. It can be very sad.”

The feeding cycle is endless. Kate holds each baby firmly between her knees and patiently waits for the bottle to be emptied. Just like a human infant, they often fall asleep mid-feed, hence the process is certainly no quick task. “They’re a lot like puppies,” she jokes. “They tear around for a little while, exploring, then they eat and then they sleep. A snooze in the sun is one of their favourite things.” 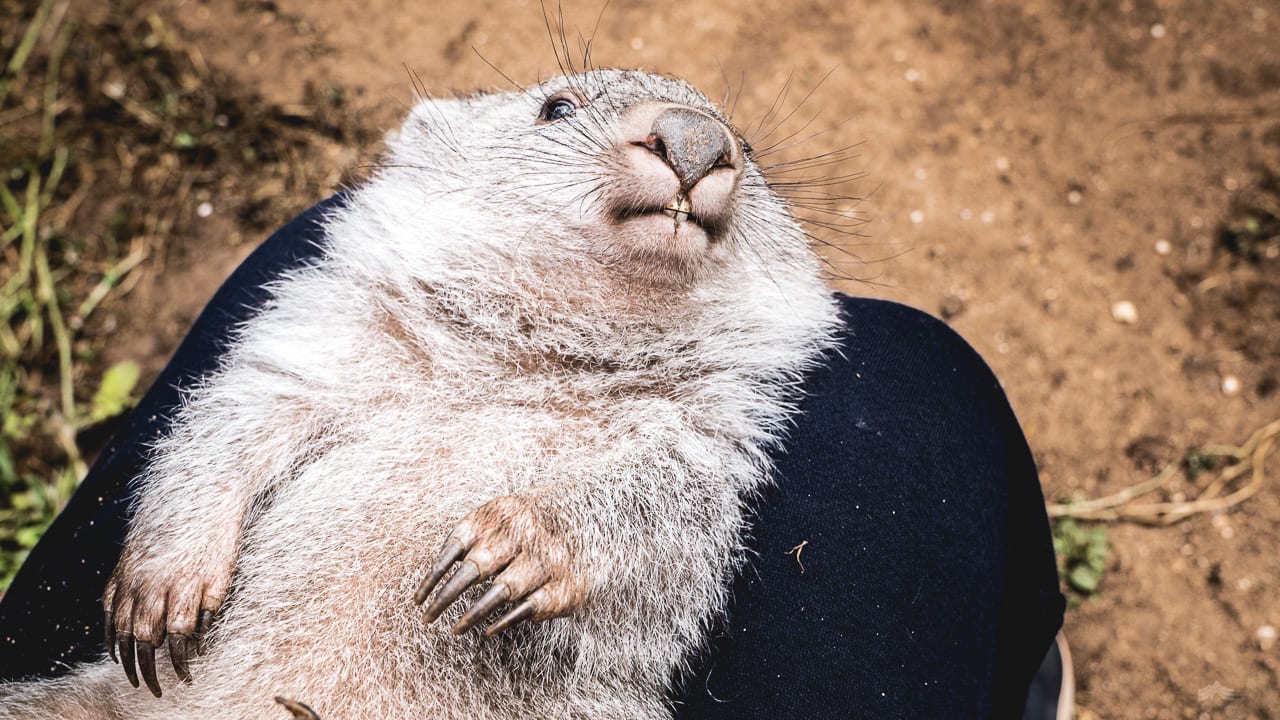 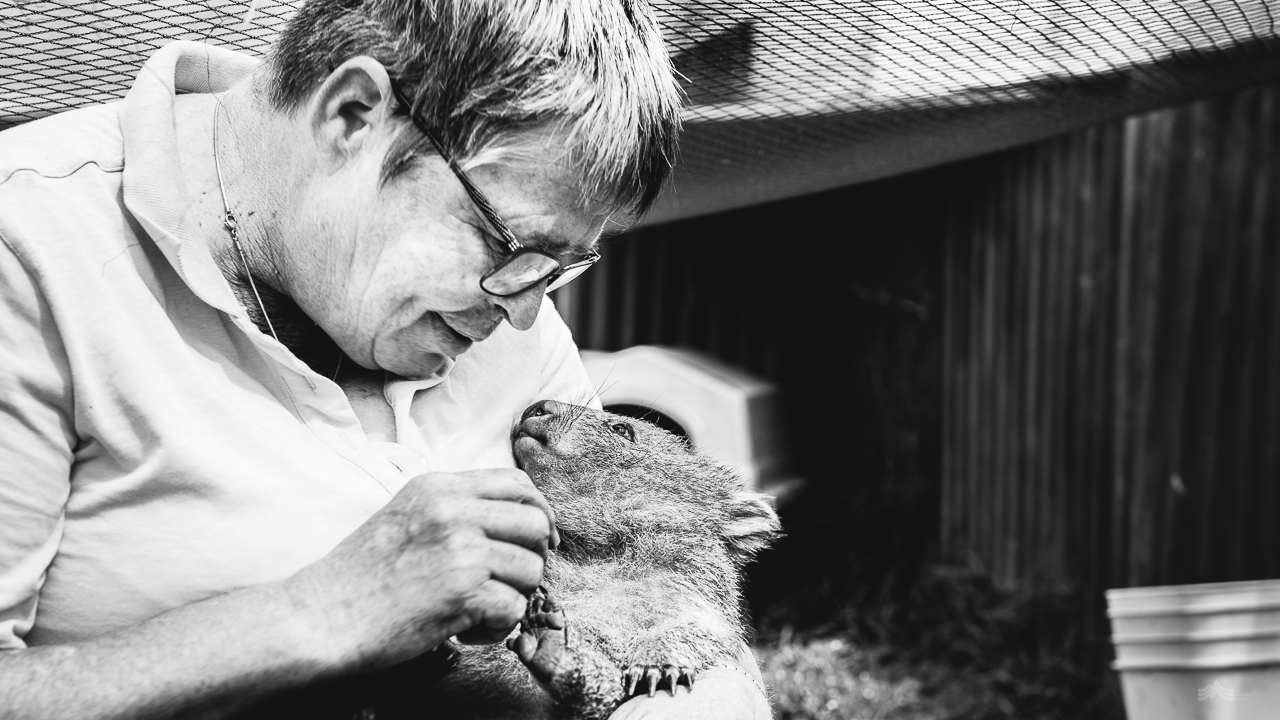 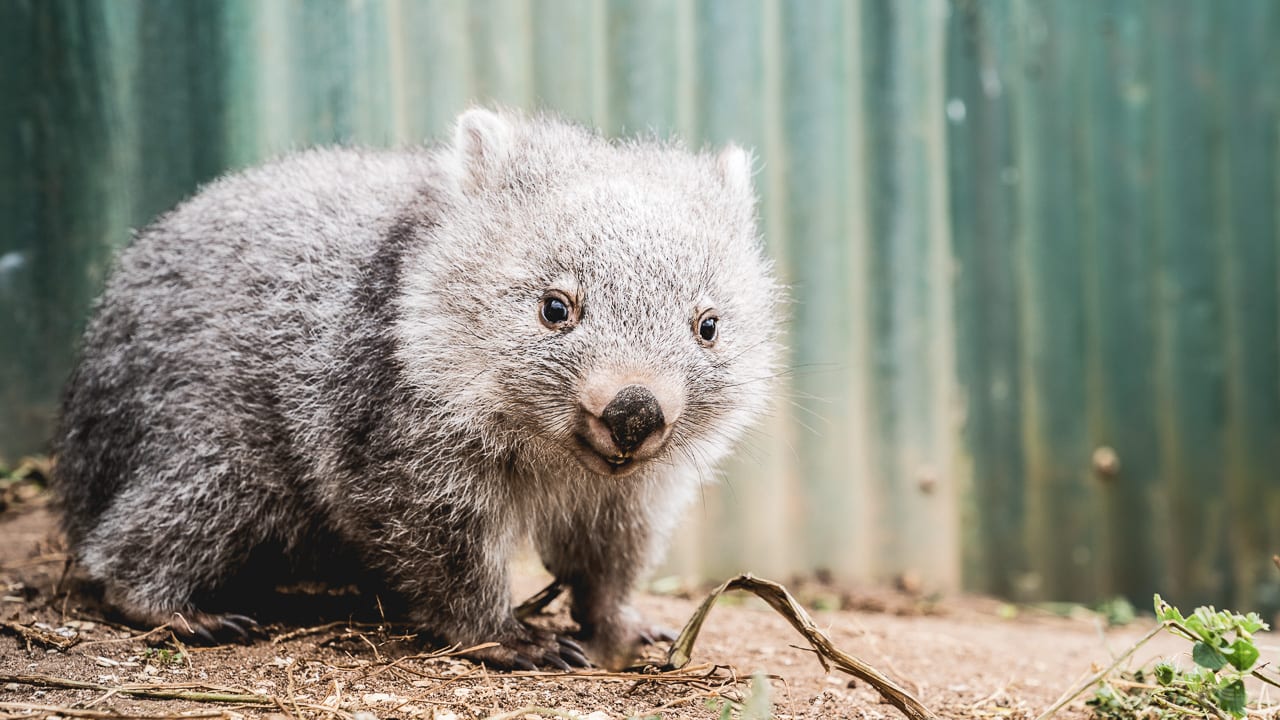 They all have names too, of course. Malcolm, Sophie, Achilles, Milo…the list goes on. Kate knows them all and is adept at describing their personalities. No one gets lost and no one is forgotten at feeding time. It’s organised chaos at its very best.

Supervising the mayhem is Orlando, an ageing dachshund constantly by Kate’s side. Noisy, characterful and with plenty of attitude of his own, Orlando prefers his own bed rather than the wombat companionship on offer on the couch. “He’s ok with them now,” Kate remarks. “But it’s taken a while. I’ve had to be pretty firm with him as he can get very grumpy and jealous and I know he’d prefer it if they weren’t here at all.” Looking into Orlando’s deep brown eyes one wonders what he’s really thinking, and if indeed he’d like the wombats to disappear down a burrow for good.

Bottles, teats, wombat formula, towels and flannelette pouches all keep Kate’s bank account under strain. It’s something she funds herself, along with the support of donations from generous community members. “The babies come with me pretty much everywhere,” she explains. “So if I’m in town it also provides people with the chance to get up close with the wombats. Quite often they will leave a donation too, which always goes straight to wombat food.”

“Often visitors say that spending half an hour sitting with me feeding them was the best part of their holiday. That’s so nice to hear. I really like watching people interact with them and seeing how much joy that experience brings. They are pretty special creatures.”

After graduating from a bottle, older wombats enjoy a diet of fresh grass supplemented with rolled oats and sweet potato. Once they are able to leave the shelter of a warm pouch, Kate moves them into an outdoor laundry. There’s also a collection of wombat-proof pens on site – best thought of as  a halfway house for those needing to be outside but still under a watchful eye. “Once they are ready, they can then make the move outdoors permanently. I teach them how to use the pet door I have in the side of a shed though, so if they want to come in for a supplementary feed they can. Some do this of their own accord for quite some time before choosing to move out on their own. They make that final decision themselves.” 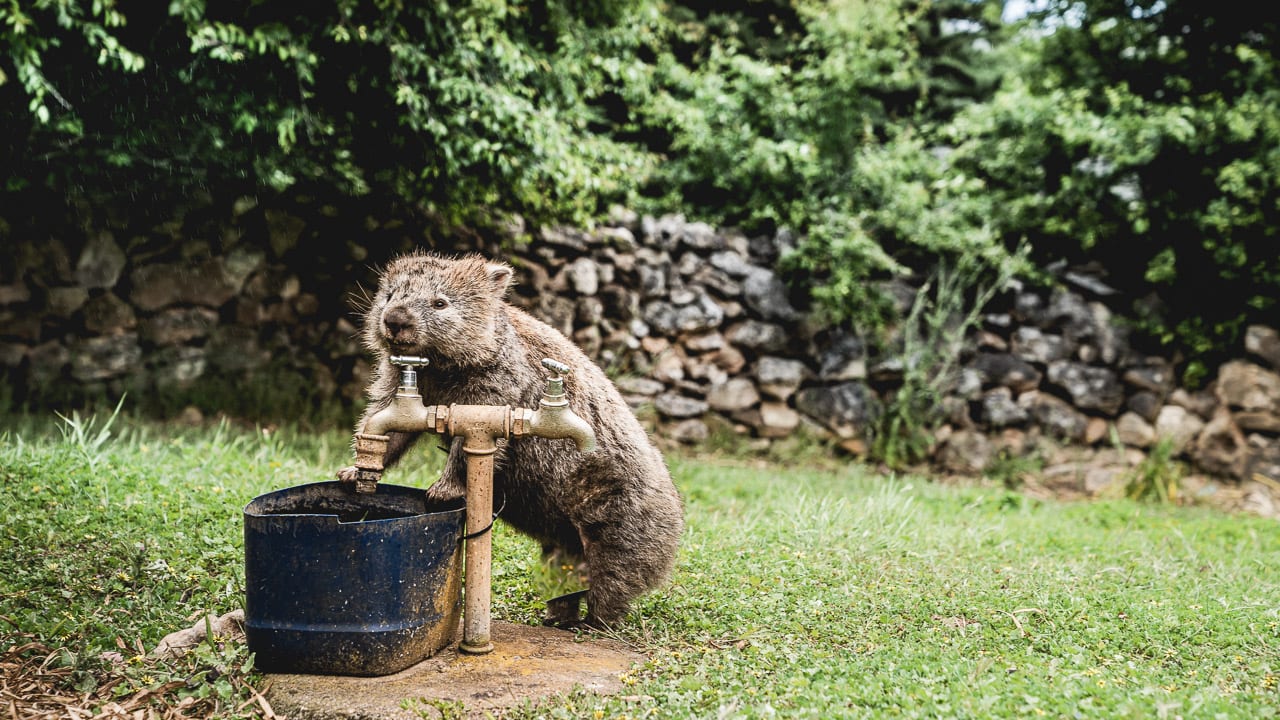 The youngest of six children, Kate grew up in George Town on the eastern bank of the Tamar River. “We always had animals growing up,” she nods. “Dogs, cats, horses…we were townies but I was always off at pony club every chance I got. I’ve always loved animals, and it’s something that runs through the whole family.”

It was pony club that provided Kate with her first taste of island life. “When I was 13 I came over here for a pony club camp. I think it was more good luck than anything…somehow the club had funds to send over a couple of kids in each age group and I was the only girl my age. That was my first experience of Flinders and I was definitely keen for more.”

A few years later Kate returned to spend what was intended to be a gap year. “That was pretty much it,” she grins. “I did leave for university, to study ag science, and to spend a couple of years as a jillaroo, but I’ve been back here since ’85 and working in shearing sheds ever since.” 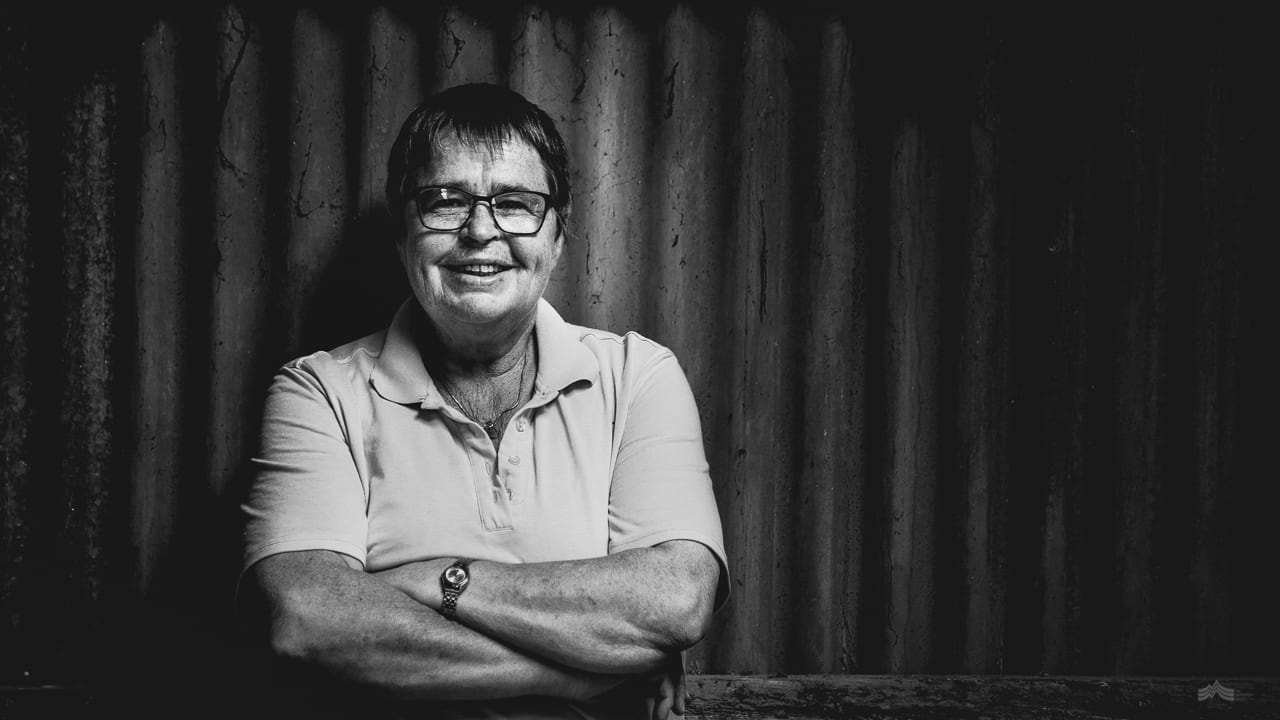 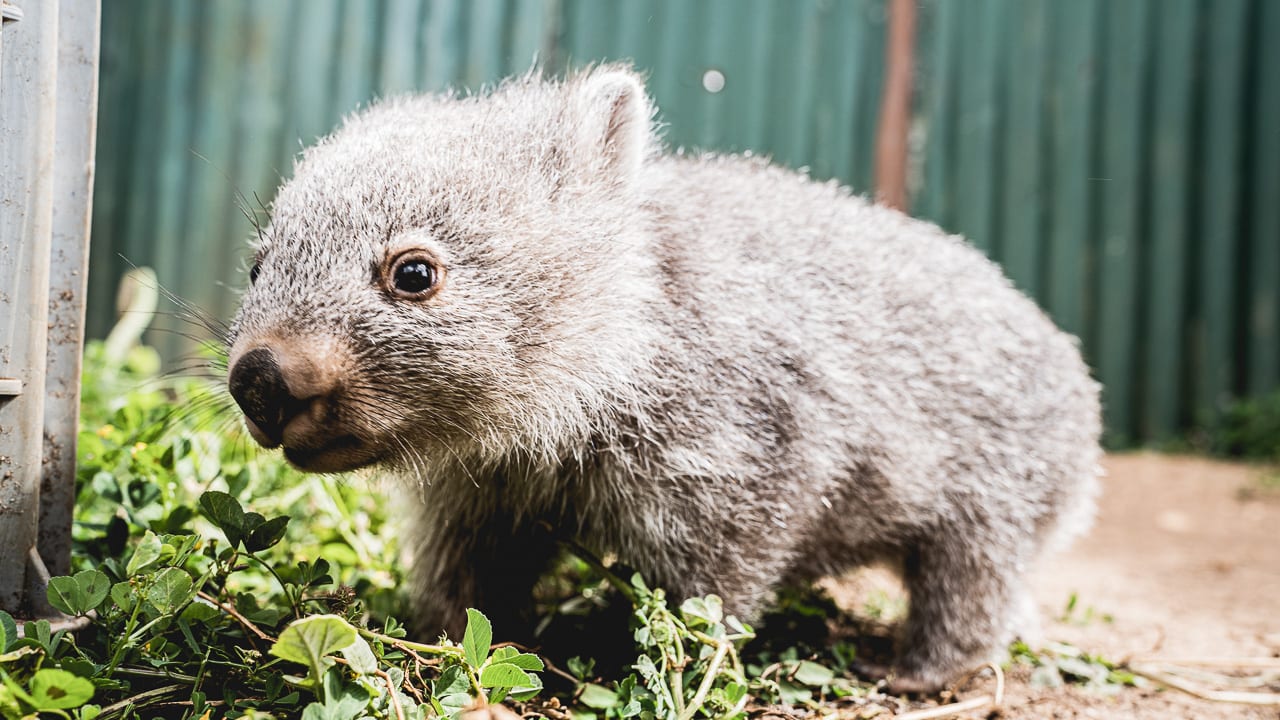 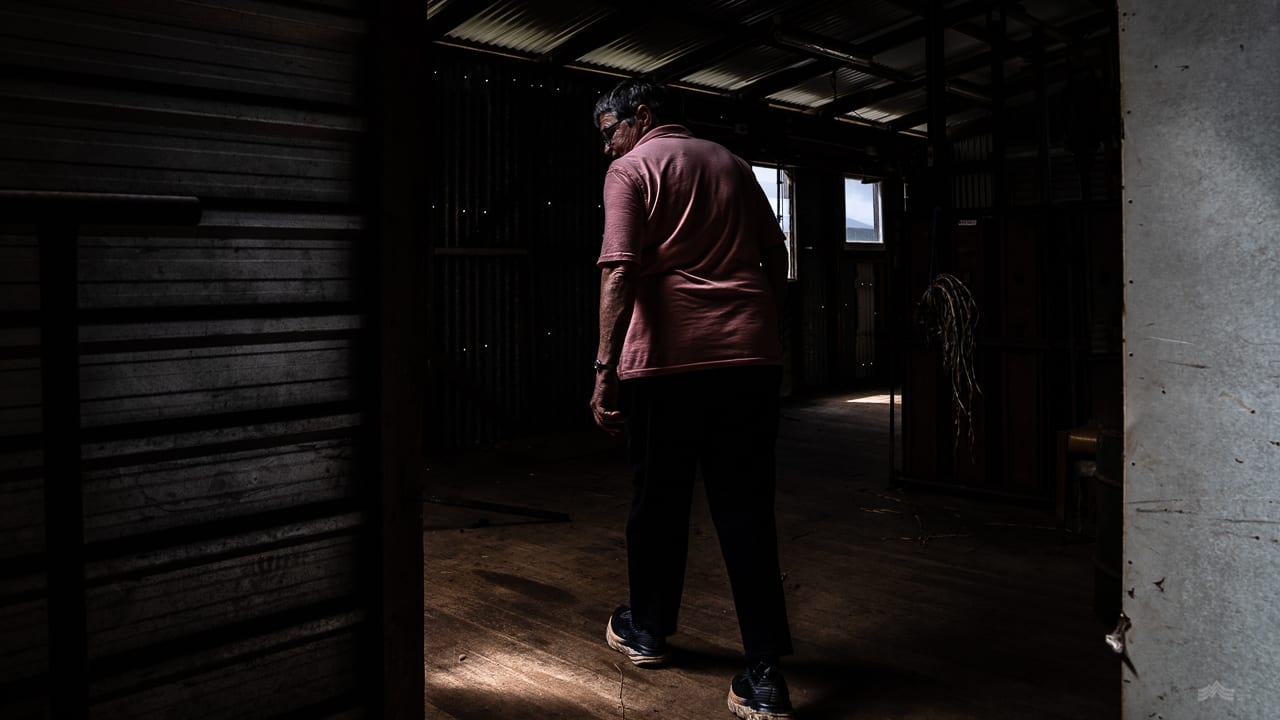 Kate details how she loves spending her days wool classing, particularly the time spent over on Badger Island – a low lying expanse of land to the south that plays home to a private sheep grazing property. “It’s great out there,” she nods. “I love working out on Badger.”

With two snoozing wombats on her lap and another burrowing behind her back, Kate has time to comment on the Flinders of today. “Tourism is certainly growing quickly,” she says. “But so far I’ve found everyone who visits to be lovely. We’ve certainly had a lot of Tasmanians over during this past year and that’s been great. They respect the place and you can see the ones that really form a connection with it.”

“At the end of the day I just hope this place doesn’t change too much. If you give something here you’ll get it back in spades. There is an immense sense of community and the people here will do anything for you if you treat them in the right way.”

As the sun sinks behind the horizon and Kate scans her eye across the paddocks before her, she is quick to point out friendly faces amongst the grass. “It’s a lot of work,” she nods, “But I wouldn’t have it any other way. You can’t beat life on Flinders.” 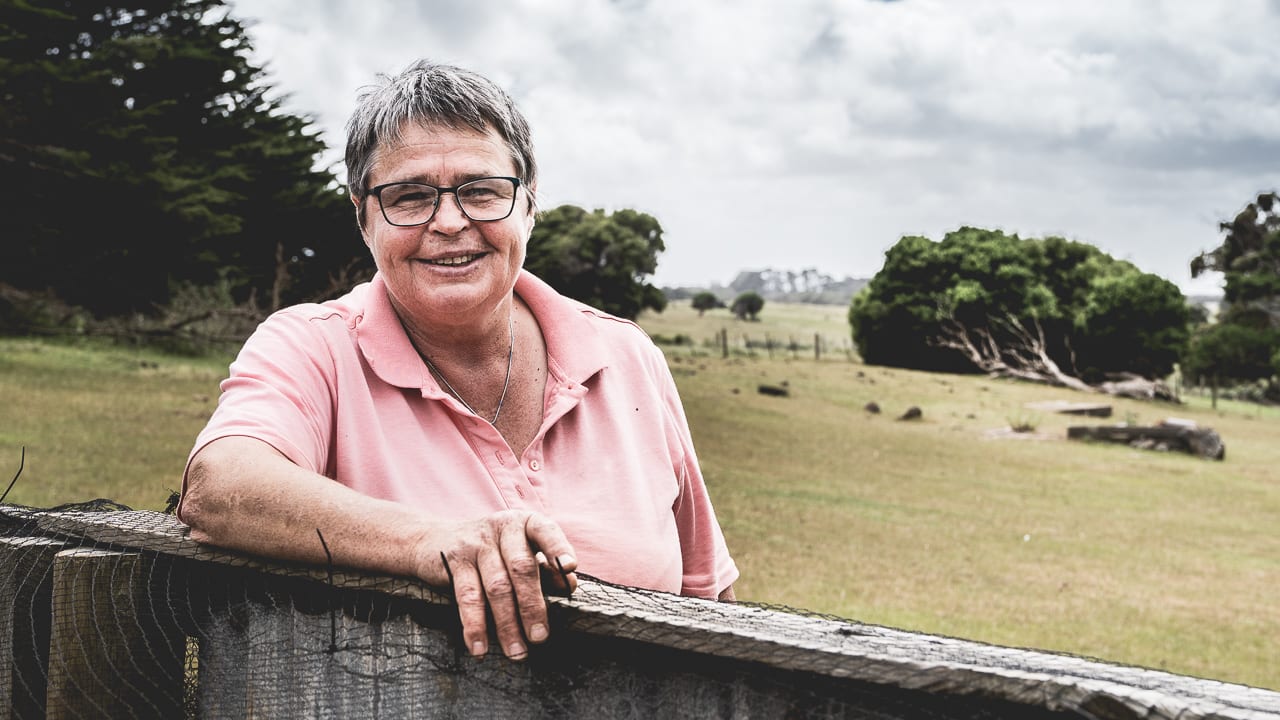 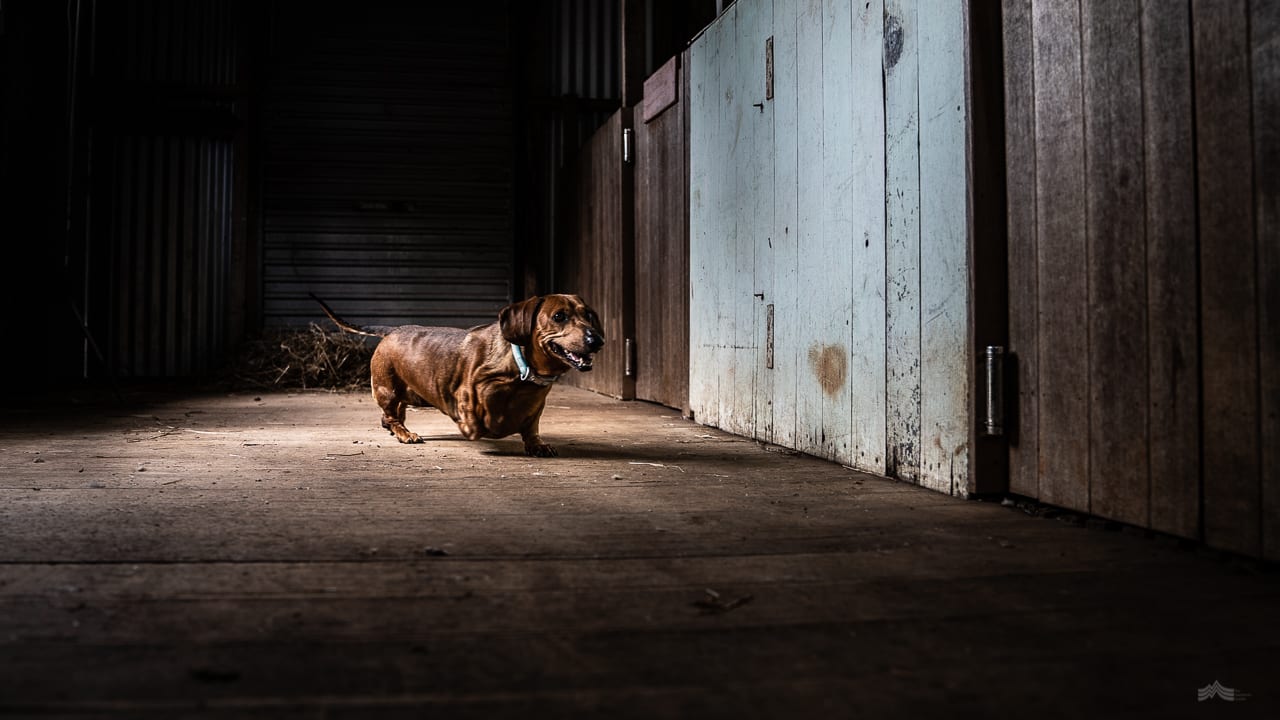 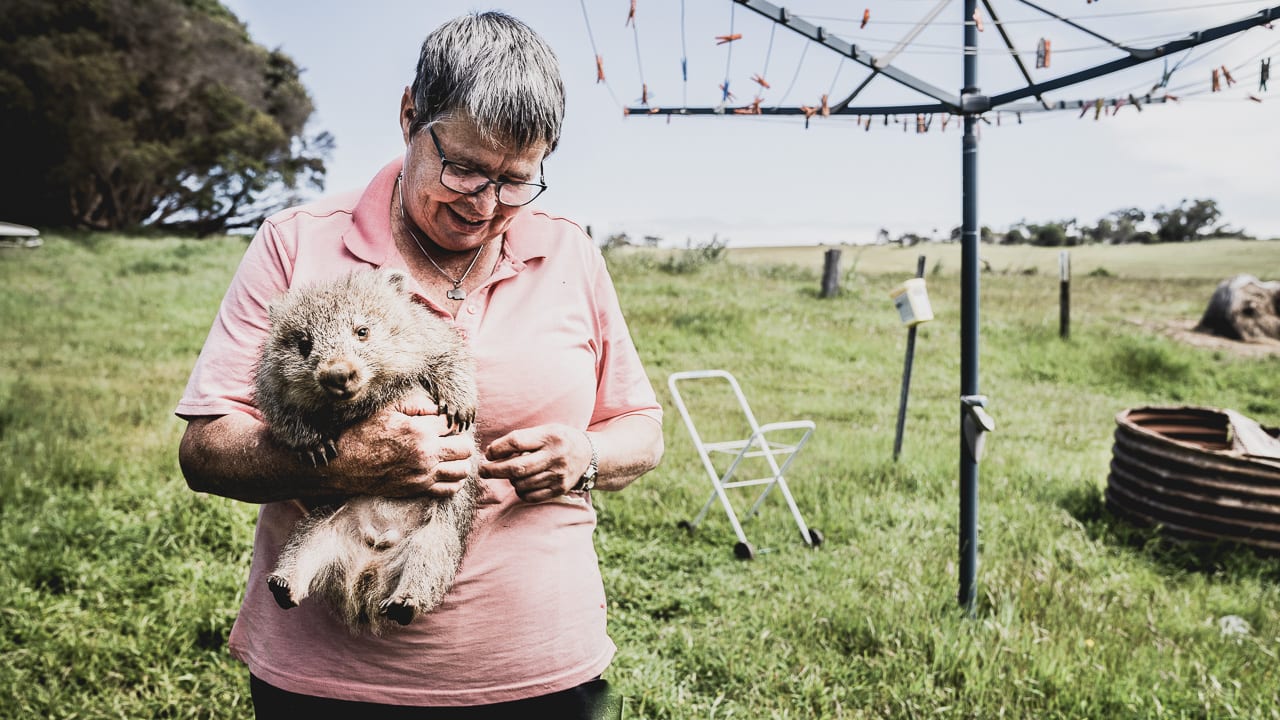 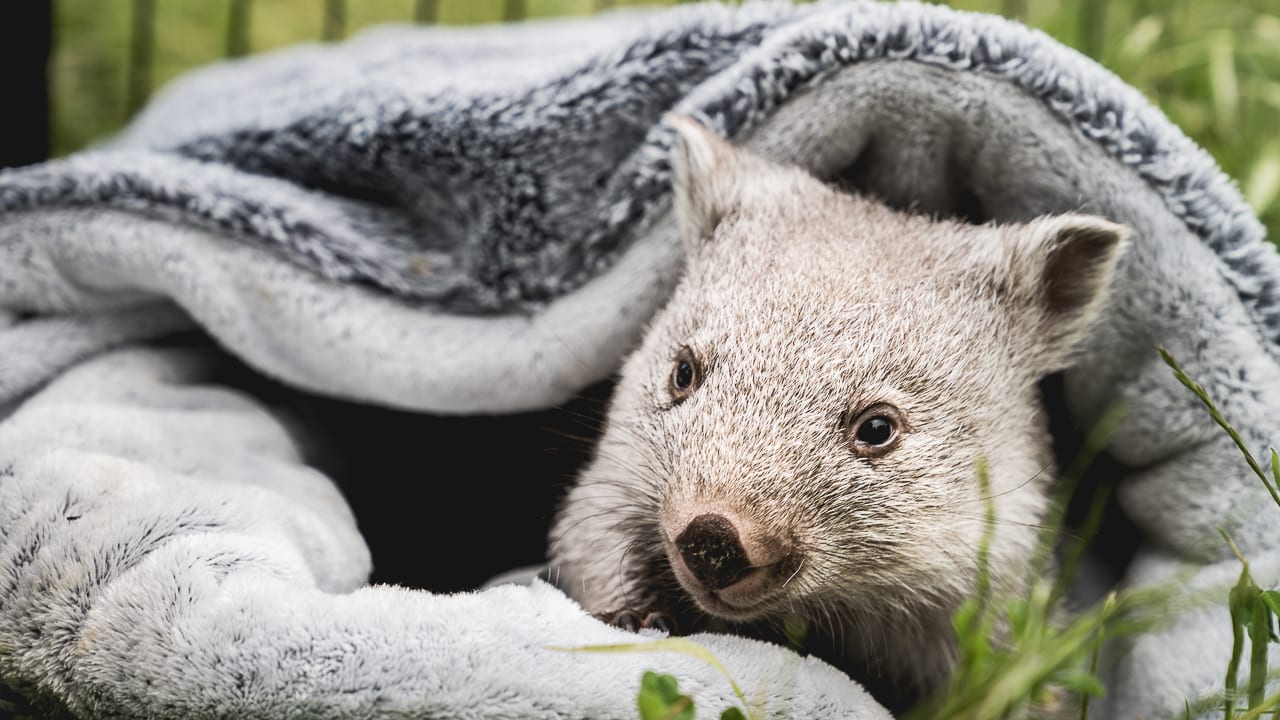