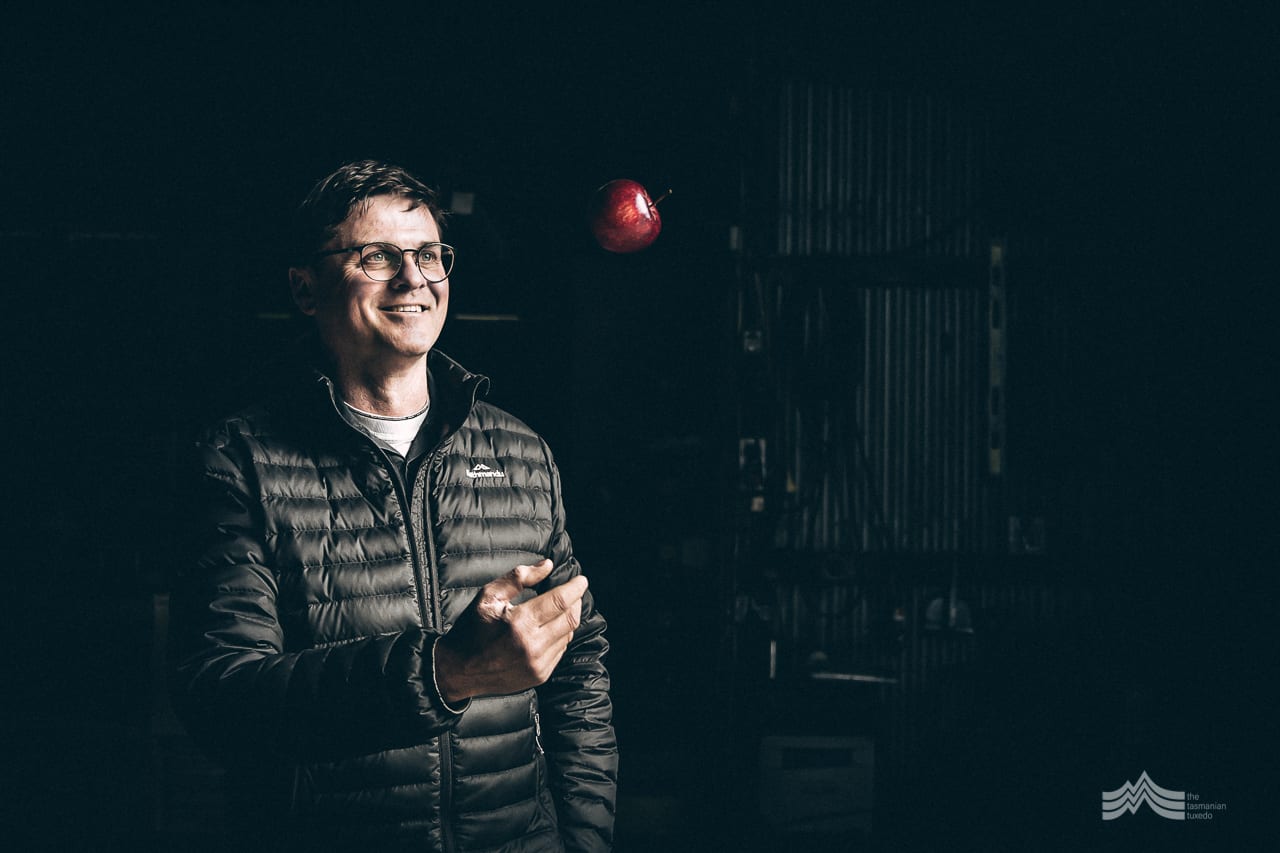 James Griggs arrived from England in 1842. He settled in Franklin, some 40 kilometres south west of Hobart as the crow flies. At the time, the township was known as ‘The Settlement’ and locals carved a humble existence from the land. They grew fruit and vegetables in the valley, fished in the river and caught eels on the mud flats. A prolific bounty of Tasmanian timber provided money for all of life’s necessities.

Apples have been grown in the Huon Valley for over 170 years. It was common for early European settlers to plant just one variety of each tree in order to establish a family orchard – a practice that laid the foundations for a booming apple industry. A peak in the middle of the 20th century saw Tasmania export millions of boxes of apples overseas, primarily to the UK and Europe. It’s a history that gave rise to Tasmania’s nickname of the ‘Apple Isle’.

The lucrative exports were stopped dead in their tracks in the early seventies when England joined the common market. With little warning, the industry was decimated and within a decade almost 700 commercial growers had ceased operations. Ultimately, many farmers subdivided their land and left the area.

The Griggs family is one that stayed. BW Griggs & Sons are sixth generation apple and cherry growers who have managed to carve a new niche on the riverbanks of Franklin. “Brian was my grandfather and along with my dad, Kevin, he started this business,” says current owner Dane, who now heads up the business alongside older brother Brett. “Brian purchased this land here in the valley and we all grew up on the original property just 80 metres up the road. BW Griggs and Son obviously refers to him and our father Kevin.” Dane adds jokingly, “The only mention Brett and I got once joining the family operation is the ‘s’ in ‘Sons’.” 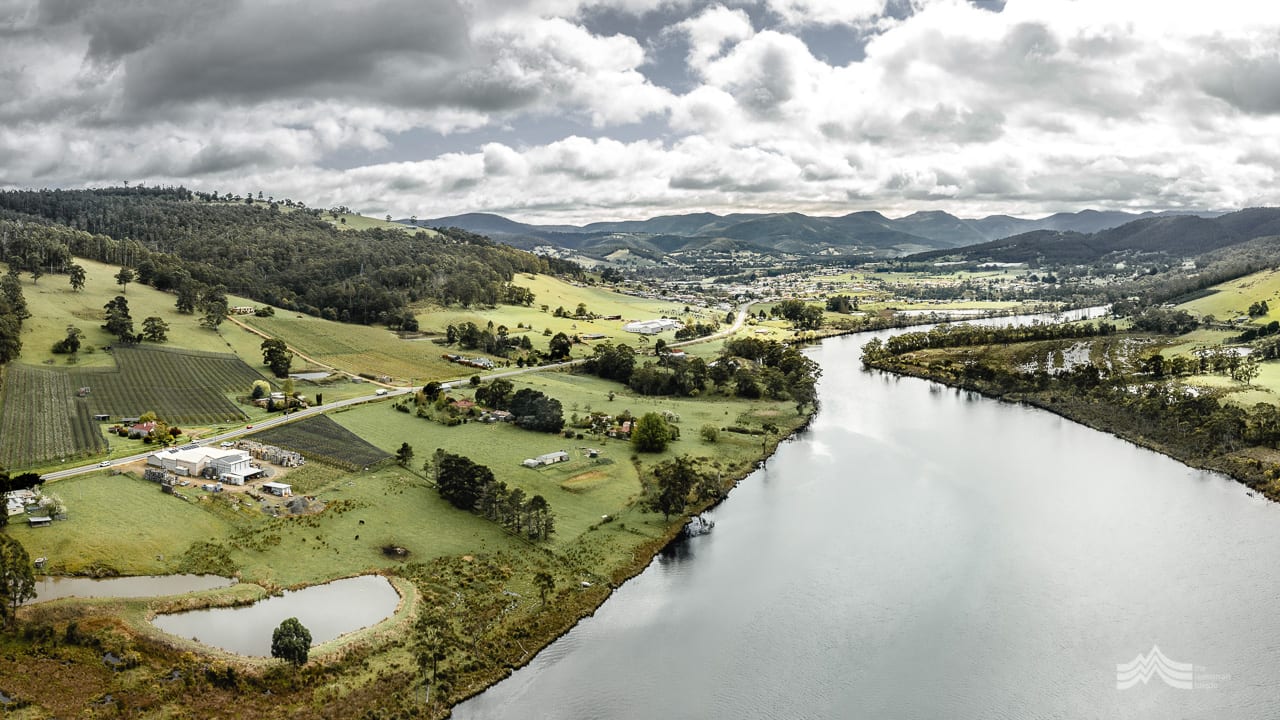 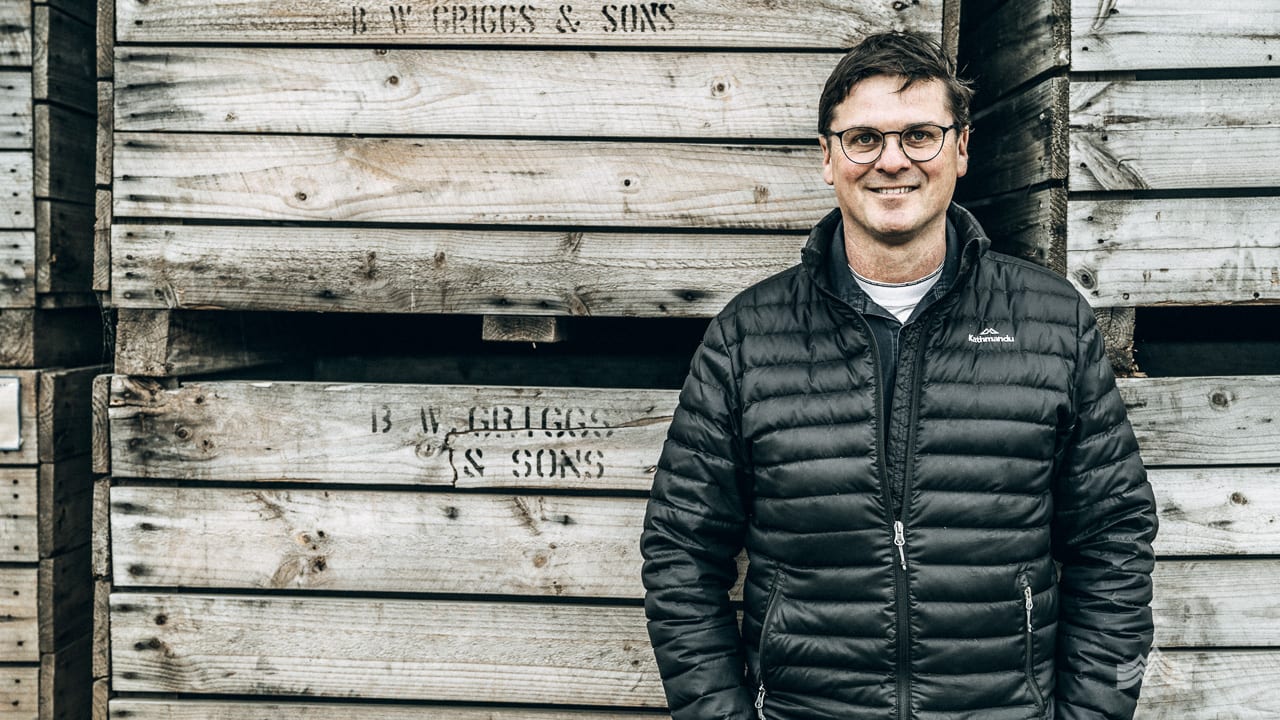 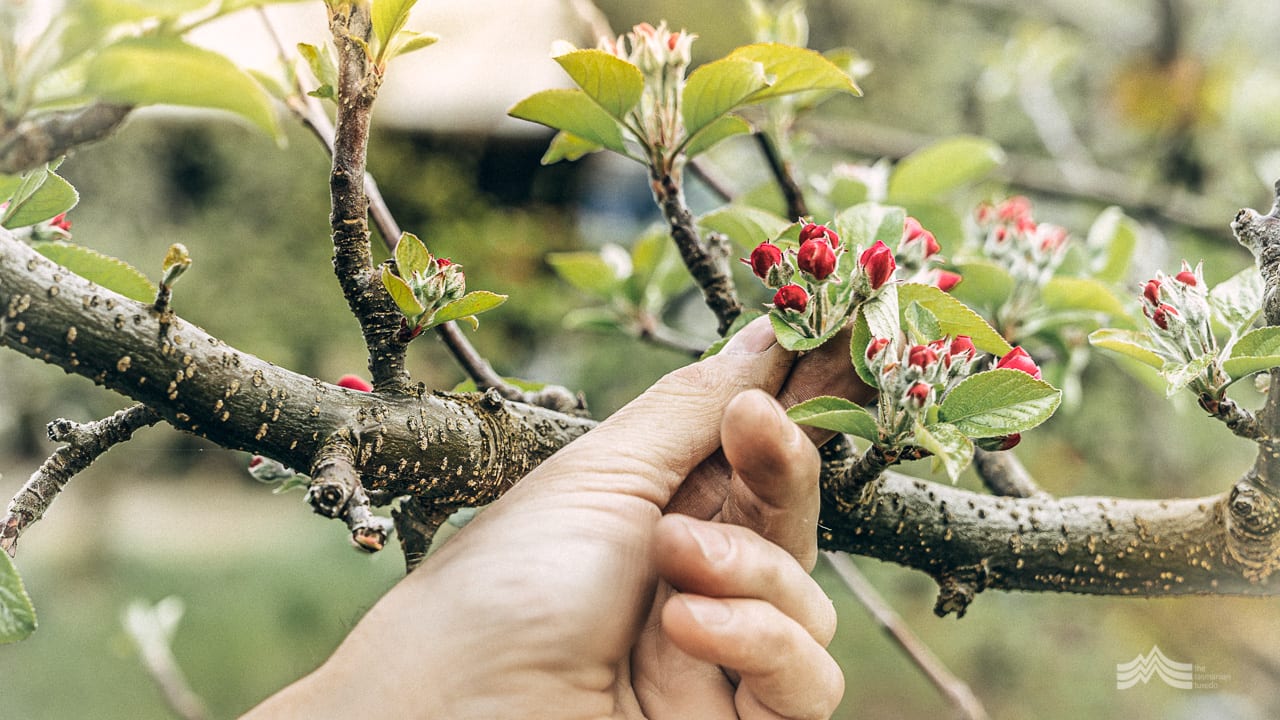 “Over time dad has acquired more land and our orchards are now dotted around this one valley. It makes it challenging to operate from the perspective of moving equipment and resources around, but provides insurance in terms of weather. If we have trouble with a frost or hail at one orchard, chances are the others have been spared. It’s a practice that spreads our risk.”

Growing a small portfolio of popular varieties, the Griggs’ stumbled across what has become their signature fruit almost 20 years ago. “I remember it well,” recalls Dane. “It was February and all the apples were still pretty green. A limb of apples was spotted that had a lot more colour than is usual at that time of the year.”

Dane explains how it’s something that’s not uncommon and is just a natural bud mutation. “We see it quite a lot, but usually these natural mutations don’t go on to have all the commercial growing characteristics that we need.” He pauses before adding, “We marked the limb, kept an eye on it, and once the fruit was ripe were pleasantly surprised to find it tasted pretty good.” 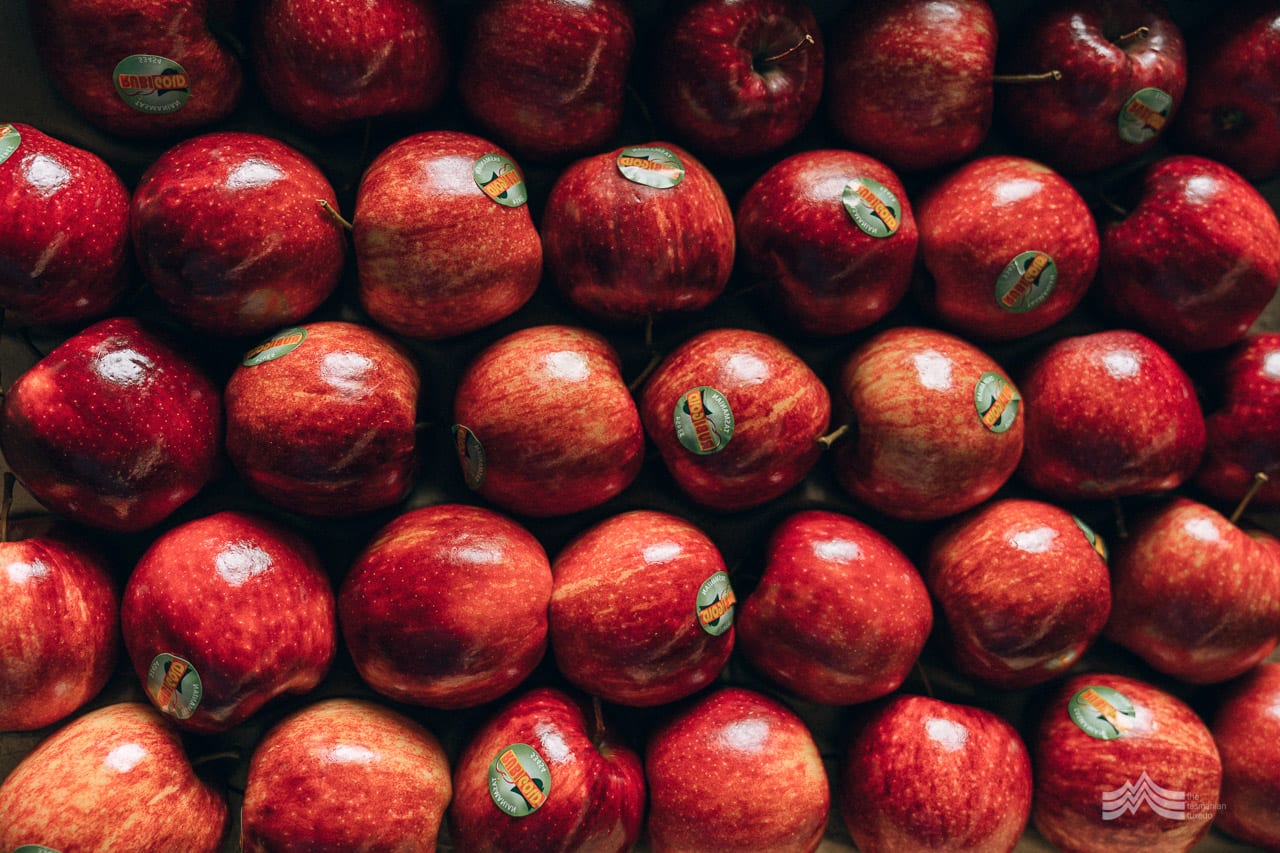 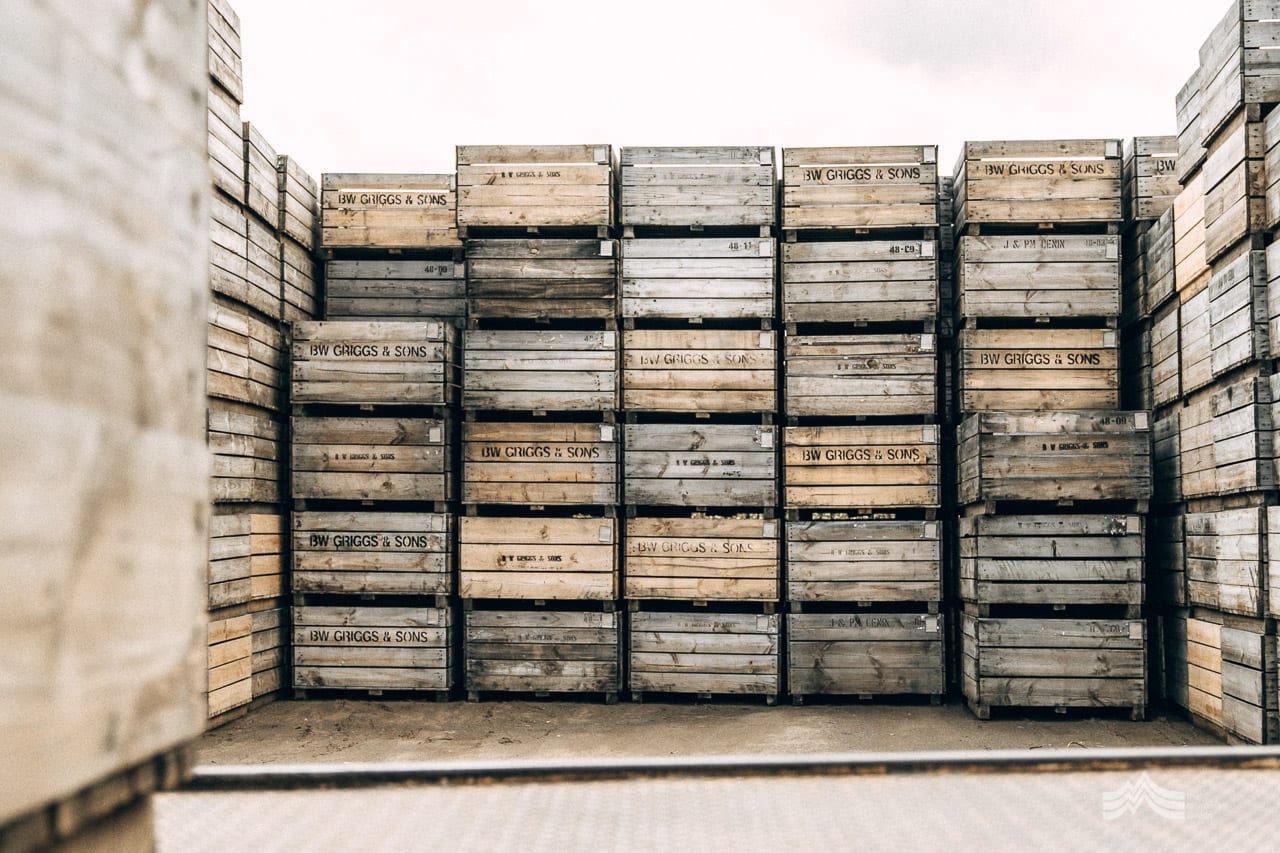 The next step in the journey is to take a cutting and graft it. “Essentially, it was an experiment,” grins Dane. “It evolved naturally, we liked it and it ticked all the boxes…it coloured early, was easy to grow, tasted good and held its own in terms of cooking too.”

And so ‘Rubigold’ was born. A new variety out of the Huon. “We named it for its red skin and golden flesh,” Dane continues, “However my grandmother’s name was also Ruby so it’s kind of nice to have that connection too. Rubigold is only grown here in this one valley in the world…so when you bite into one you can be sure of its origin. They are all from our family orchards here in this one Tasmanian valley.”

It’s a concept that can be likened to the French champagne market. “It’s a similar mentality really,” says Dane of the boutique apple that has won favour around the world. “We can maintain control over the quality of the product and really make the most of the local conditions here. This valley is great for apple growing and our customers seem to be intrigued by the scarcity of the variety. It’s uniquely Tasmanian owned and grown.”

Whilst the Griggs’ still grow other varieties of apples, Rubigold has become the flagship of the stable and now accounts for around 40% of their crop. “Most apple trees require thinning in order to break up clusters of the fruit,” explains Dane. “Rubigold doesn’t require that, it happens naturally so it’s a great variety in terms of production. It also colours up well even in low sunlight so the fruit that’s growing on the inner limbs of the tree, sheltered from direct sunlight, is also very marketable which is quite unusual.”

Dane reveals, “It’s also an excellent cooking apple. The flesh stays golden when cooked, unlike many other varieties, and you also don’t need to use as much sugar. Recipes that call for a cup or two of sugar can be made with none at all if Rubigolds are used. It has a naturally sweet and sharp flavor and the flesh doesn’t oxidize quickly so that makes it great on platters because it’s slow to brown. It’s a great juicer too – a winner all round really.” 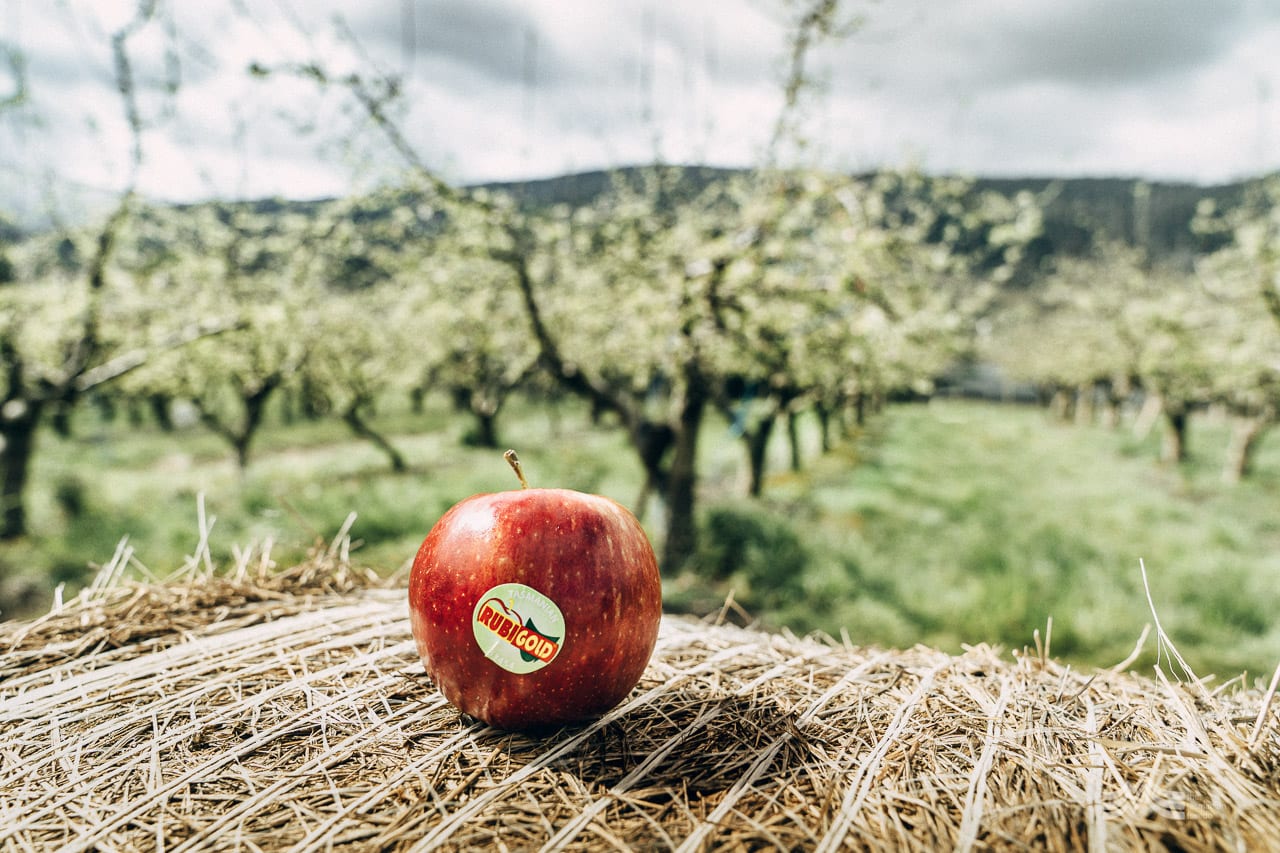 With the variety now fully protected by Plant Breeder’s Rights (PBR), the Griggs’ are afforded intellectual property protection over their discovery. “It’s nice to finally have that secured,” agrees Dane. “From that one chance limb on a single tree in the valley has come a whole new variety.”

Whilst Rubigold’s bright red skin and golden flesh has proven popular in Asia, colours that traditionally symbolise passion, luck and prosperity, the Griggs’ prefer to concentrate on the domestic market. “We really do enjoy selling locally and domestic sales account for about 95% of our business now,” explains Dane, “I still deliver into Hobart myself each week as I really like the interactions with our customers. It’s good to have a chat and a coffee with them and know what’s going on.” A focus on independents has worked well too, with the Griggs’ finding synergies with likeminded family businesses. “For us, it’s really about people rather than corporations…we find that far more rewarding. Hill Street Grocer and Salamanca Fresh are amongst some of our most valued customers and have both developed a strong following of Rubigold lovers.”

Dane recalls a happy childhood on the family’s Franklin property. “We were always outside…there are even photos of us in the bouncinette in the orchard,” he laughs. “Footy and motorbikes always kept us busy…we used the lanes in the orchard as race tracks. As a teenager saving up for my first car involved working with a hammer and nails of a night making apple crates by hand. I made $3 per crate and got stuck straight into it every day after school. I also swept the floor of the apple shed for 50c an hour. I’d jot the hours down in an old notebook and by the end of the season I’d have about $100 to collect.” 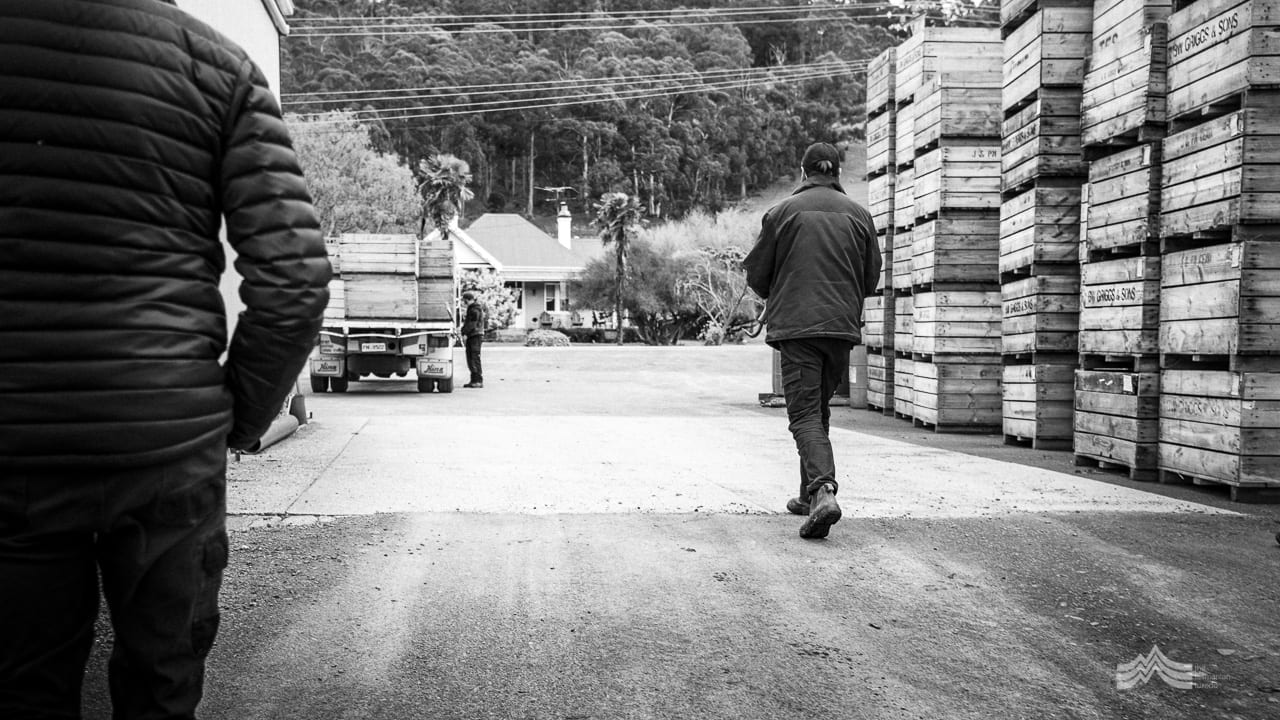 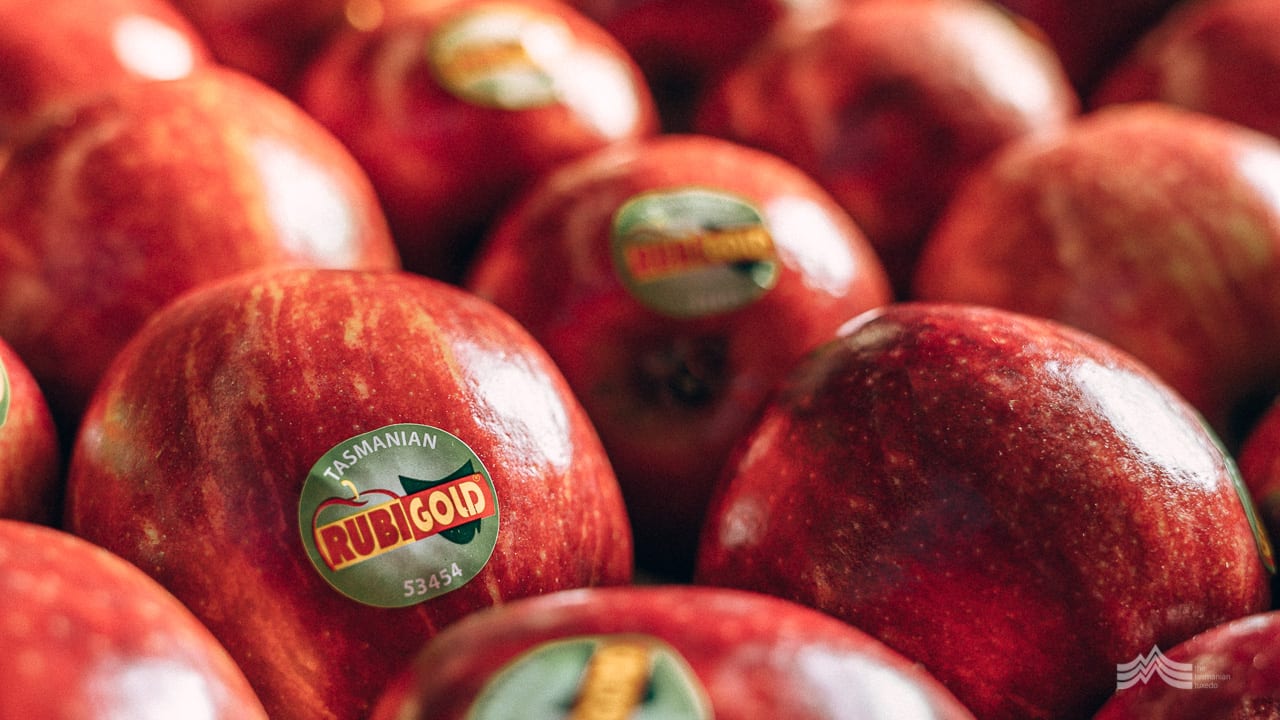 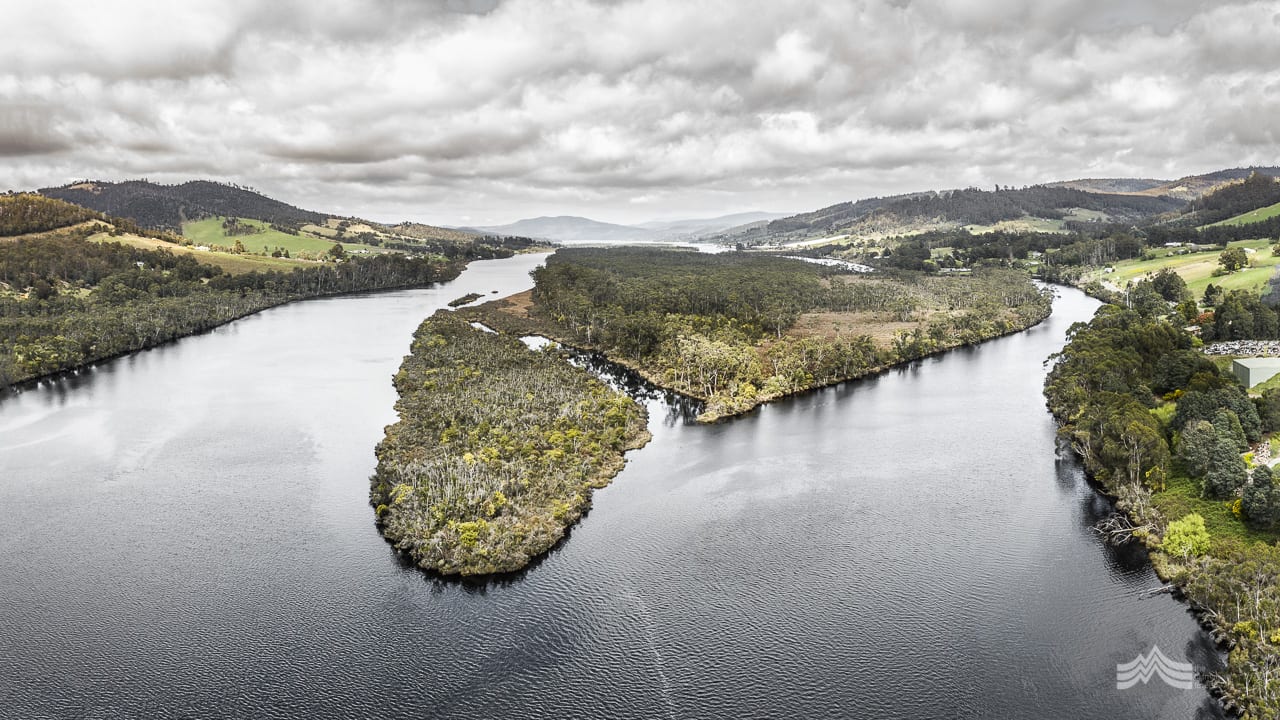 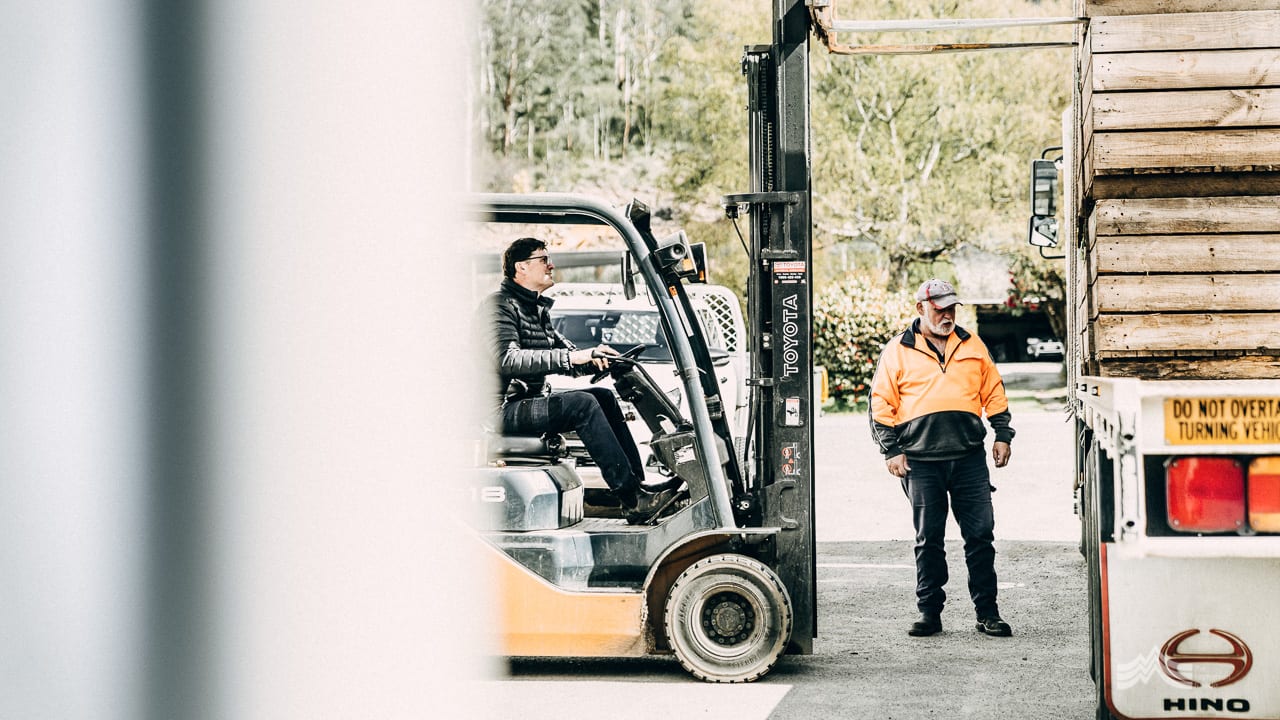 “Dad certainly encouraged both Brett and I to get a skill off the farm. I’m a fitter and turner by trade and Brett is a motor mechanic,” he explains. “Both skill sets are very handy and we still find ourselves forever building and repairing things. I’m certain it’s saved a huge amount of money over the years and as we often say to each other, ‘you can’t beat a good trained human.’”

“Our philosophy has always been to look after what we’ve got, rather than just buy something new.”

Family dynamics have work well for this seasoned team who bring opposing skills to their shared business. “Brett looks after the production, harvesting and storage side of things whilst I take care of the packaging, marketing and distribution,” describes Dane. With a cheeky grin he adds, “Occasionally we stick our noses into each other’s business and offer a bit of advice. We certainly keep each other on our toes.”

Whilst some growers are forever chasing expansion and new market opportunities, the Griggs brothers are happy with their current state of play. “Growth always comes with its problems and we are pretty comfortable with where things are at right now,” says Dane. “The orchards are supporting both our families and also allowing us to enjoy a pretty nice lifestyle. We cherish our weekends here in the valley. This lifestyle is pretty hard to beat.”

When asked to recount some of the biggest challenges of the past two decades, Dane is quick to pipe up. “The hardest thing has been getting people just to try Rubigold,” he admits. “People are creatures of habit and love their favourites. What we consistently find is that if they’re willing to give it a try, they’ll love it. It’s that initial hesitation to try something new that remains the biggest challenge.”

Early mornings on the banks of the Huon River at Franklin can be spectacular. Perfect reflections are often cast across the deep tannin-stained waters, providing an idyllic backdrop for a family farm. Stop in at the Griggs’ roadside stand to grab a bag of apples and you’ll be standing in the heart of the action. Pure Tassie freshness. 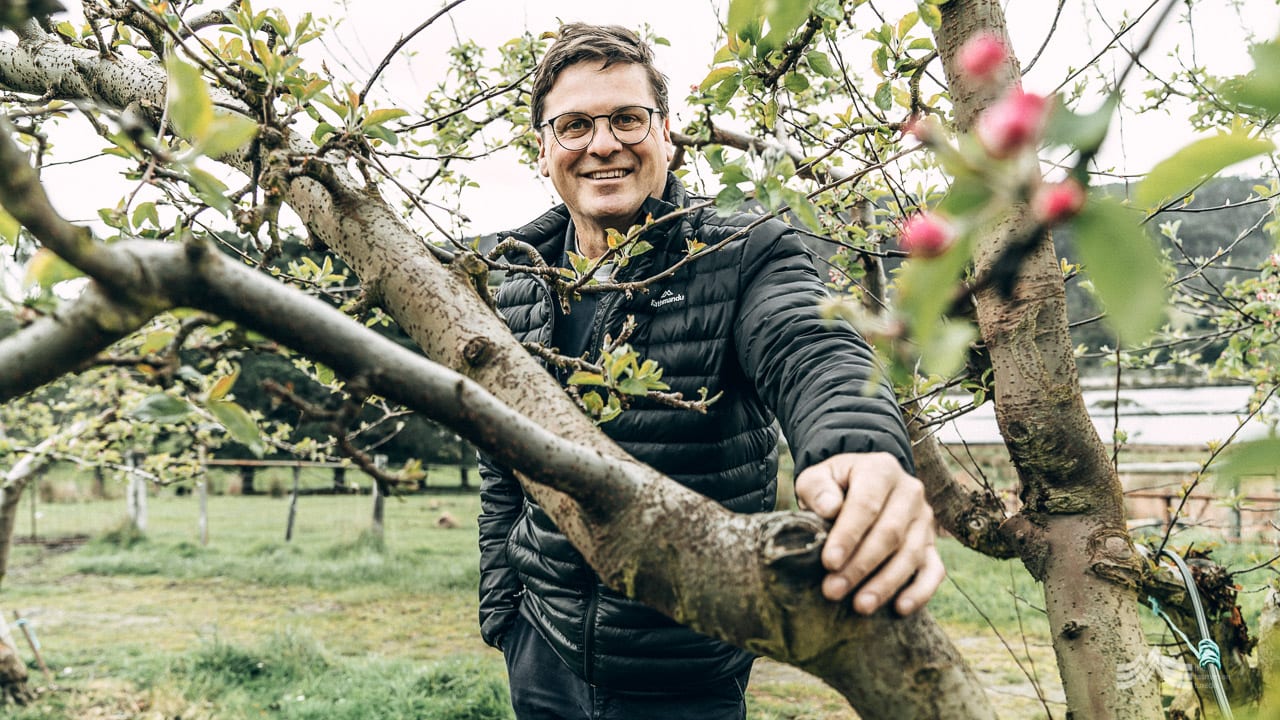 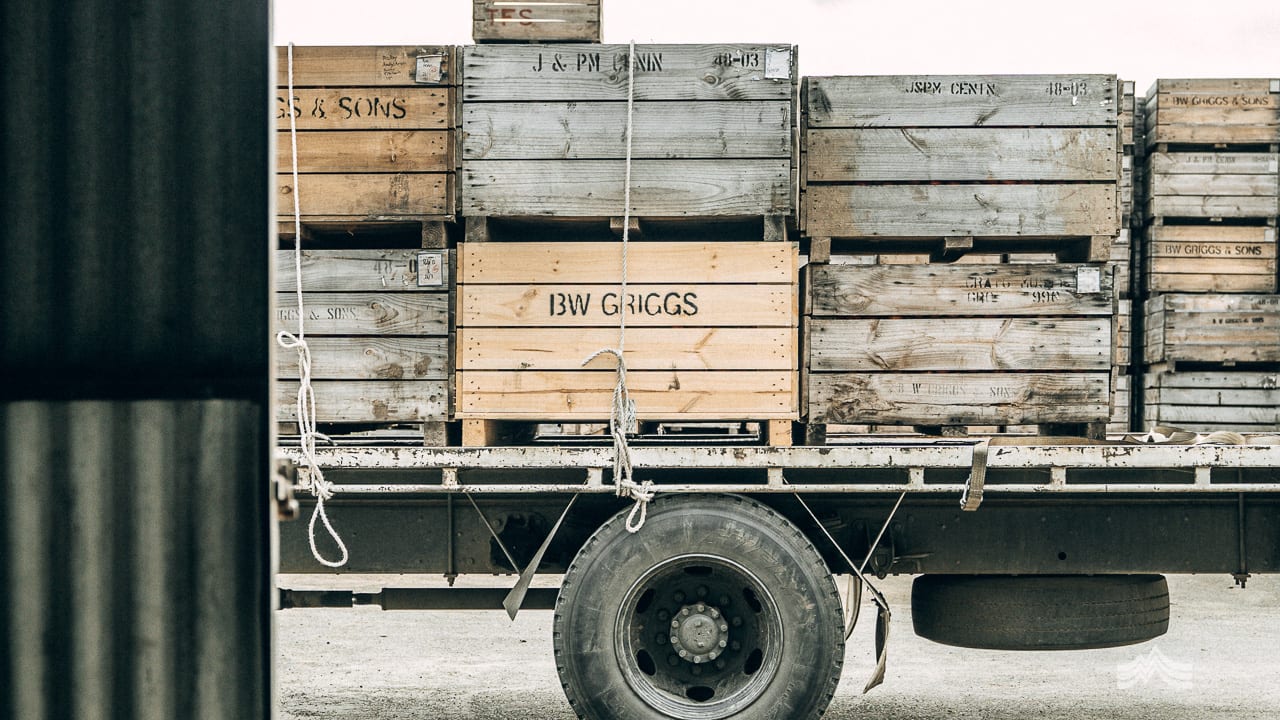 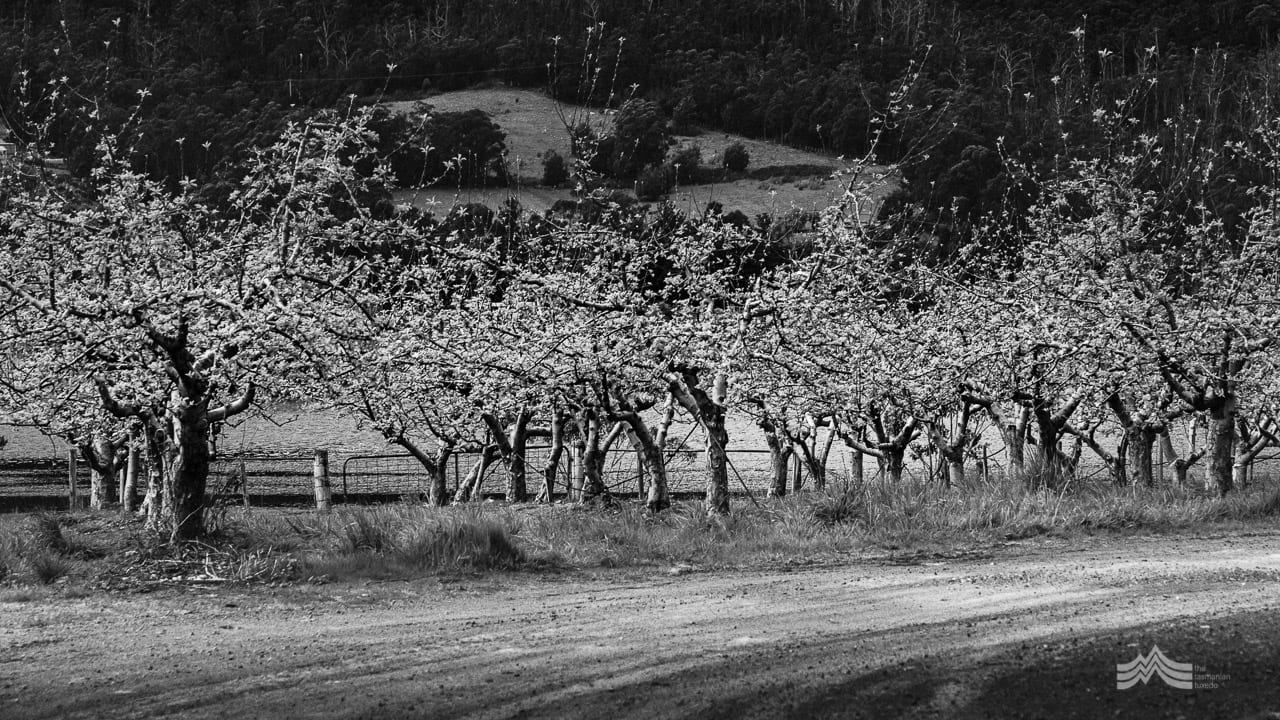 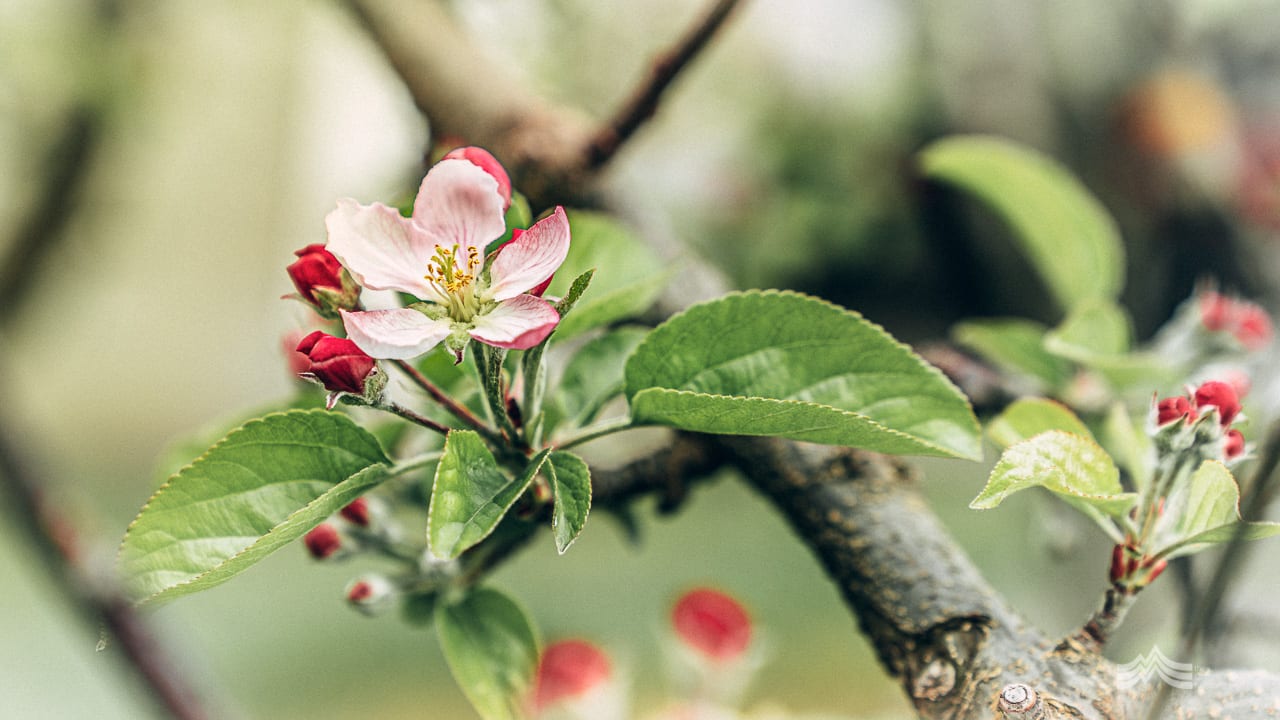 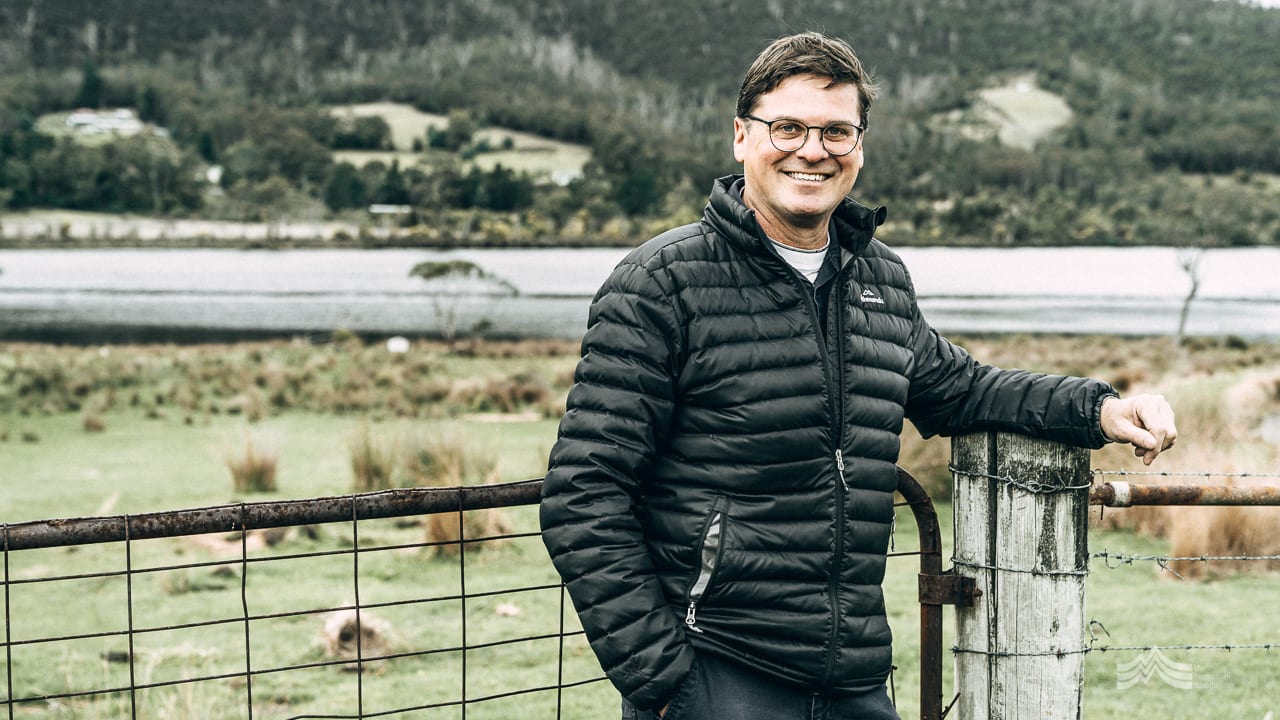