#34 The lost huts of kunanyi/Mount Wellington 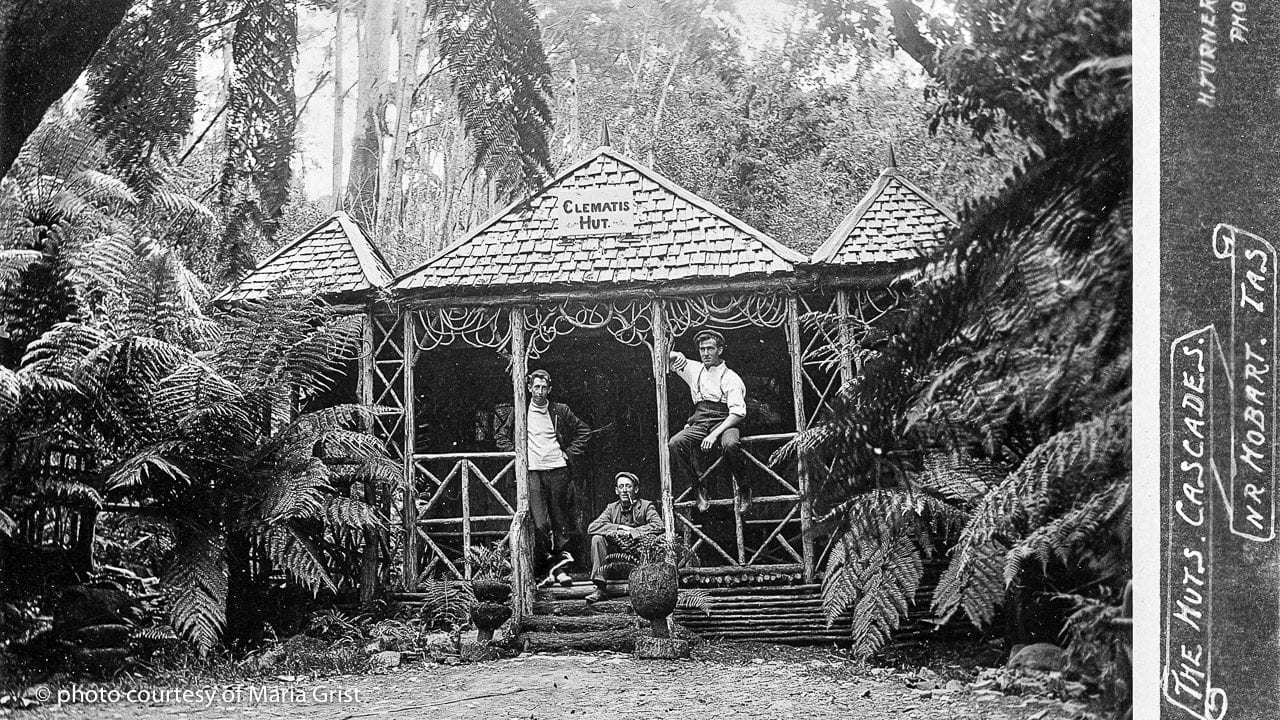 Right away in a secluded spot we came upon a bark hut, which had been constructed by a number of city youths as a rendezvous upon holidays. And a more beautiful site for such a place we never saw. The interior of the hut was fitted up with several kinds of rustic furniture, ingeniously made out of the branches of the gnarled tree shrubs.

Maria Grist shares this charming description from yesteryear in her new book The Huts of kunanyi/Mount Wellington. Maria, along with her husband John, has been researching, documenting and exploring ‘the mountain’ for decades. It’s a passion that’s seen her painstakingly follow cryptic trails in order to preserve information for future generations. “In the 80s we’d pack up the kids and go exploring the ruins of the huts,” recall Maria. “We lived near the mountain, we were caught up with other walkers, and we regularly met with older walkers who were passionate about the mountain…it just grew from there.” 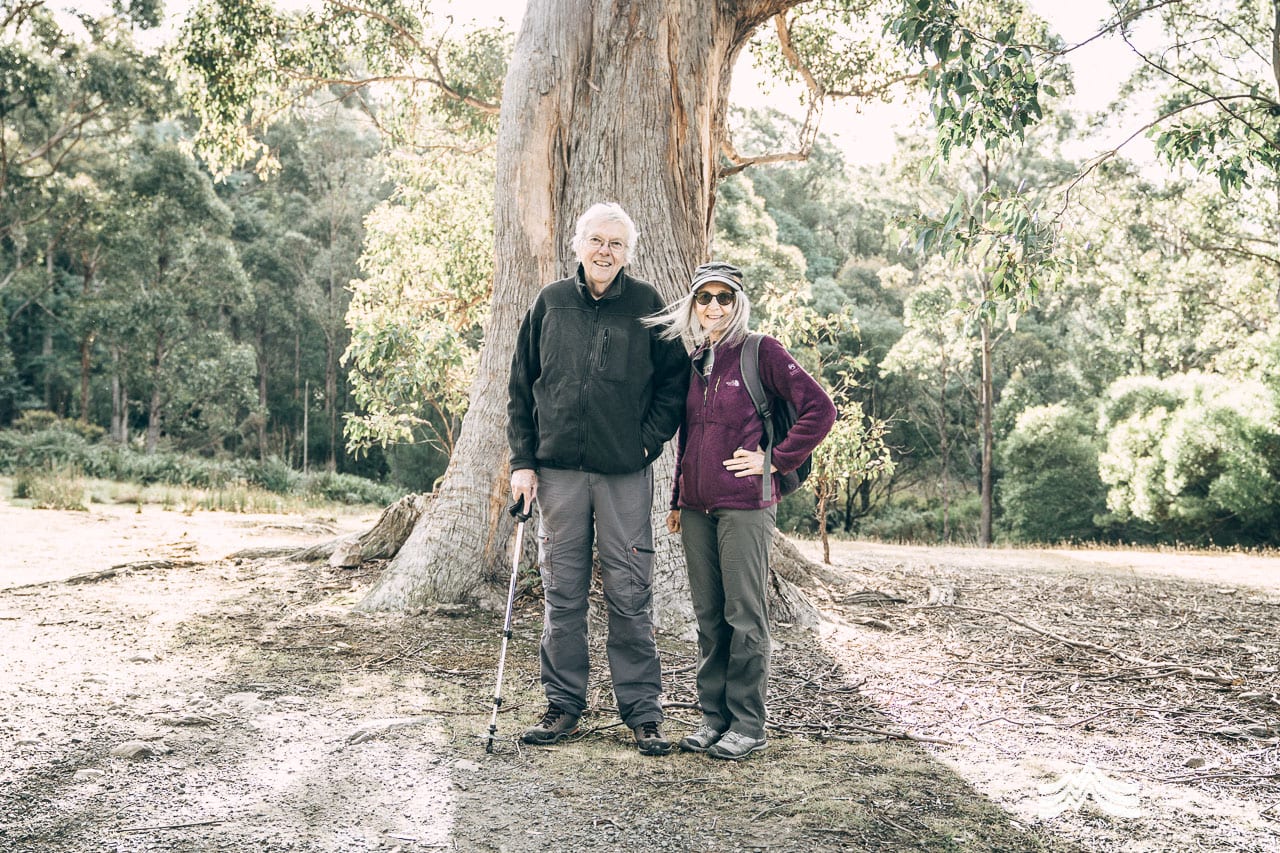 “Between the 1890s and the 1920s many recreational rustic huts were built on the lower slopes of the mountain,” explains Maria, her eyes shining. “The men of Hobart would work a five and a half day week at the time, and then spend their weekends on the mountain. They would create a place to escape to…something beautiful for themselves and their families and friends…away from the city, away from the coal, and away from the factories.”

Looking at precious old photographs, postcards, and clippings in Maria’s collection, one is easily mesmerised by the ornate architecture of these lost constructions. “In Europe at the time, the arts and craft movement was very popular. This heavily influenced the design of the huts and groups went to extraordinary lengths to make their hut stand out. Each one was different and they were all so beautiful.”

It’s astonishing to think that these carefully crafted structures were the result of natural materials readily found in the foothills. “They used materials found on site… stones, logs, bark, tree roots, shingles cut on site…that sort of thing,” describes Maria. “I love that they were all built with careful thought and passion…that’s very clear in the level of detail.”

Special additions were brought in from Hobart. Pieces of discarded tin for chimneys, cooking implements and items of furniture. One hut reputedly contained a piano – hut members loved to outdo each other, striving to create the ultimate weekend escape. “If you look back at postcards of the day, you’ll notice many of the huts changed over the years. Members would constantly work to improve them and all sort of embellishments can be traced in the pictures…bridges, verandahs, summer houses, lookouts, archways…it was amazing really. Many were destroyed by fire too, and were subsequently rebuilt…sometimes numerous times.”

Maria explains that the huts were always sited beside a water course. “Water was obviously a necessity, and they were usually accessed by tracks originally built by loggers.” These factors meant they were commonly located in damp gullies that supported lush tree fern growth, creating a ‘garden’ akin to a prehistoric fantasy land. 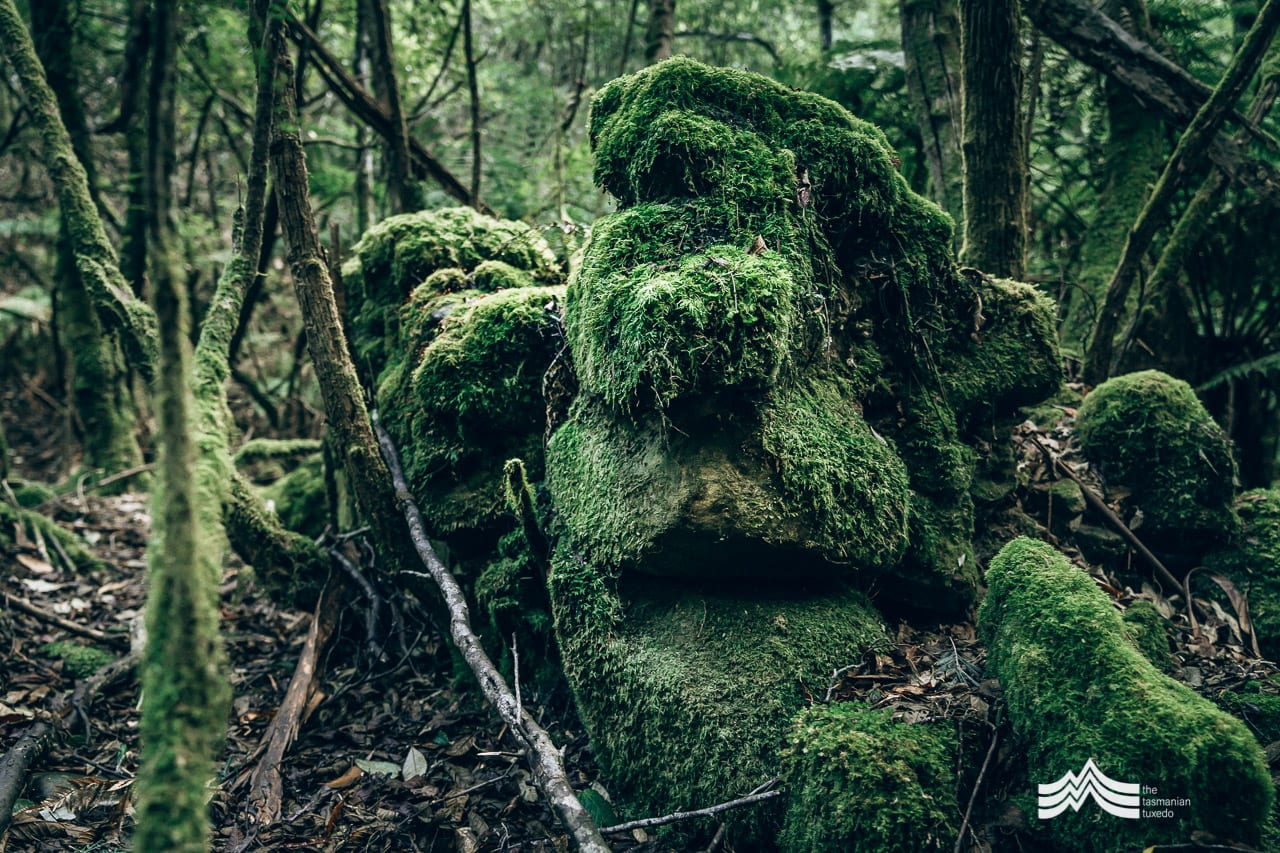 Sticks, branches and roots were commonly used to create intricate latticework, railings and fencing. An attention to detail inspired by the popular art nouveau style of the time is clearly evident in many of Maria’s photographs. Builders embraced the philosophy that no object should be overlooked and aesthetics were given the highest of priority.  A fanciful retreat in the middle of the rainforest is an apt description of many of the huts. Images captured during the winter months take things to a whole new level with a magical covering of snow adding to the effect.

Many of the huts were built on land that was then owned by the Cascade Company. “There are recollections that the Cascade Brewery ranger would collect a rent of one shilling per week from the huts ‘members’, the term that was used to describe the group of men responsible for construction. We do know however, that women also frequented the huts and it’s likely they were heavily involved in the decoration of the interiors.” 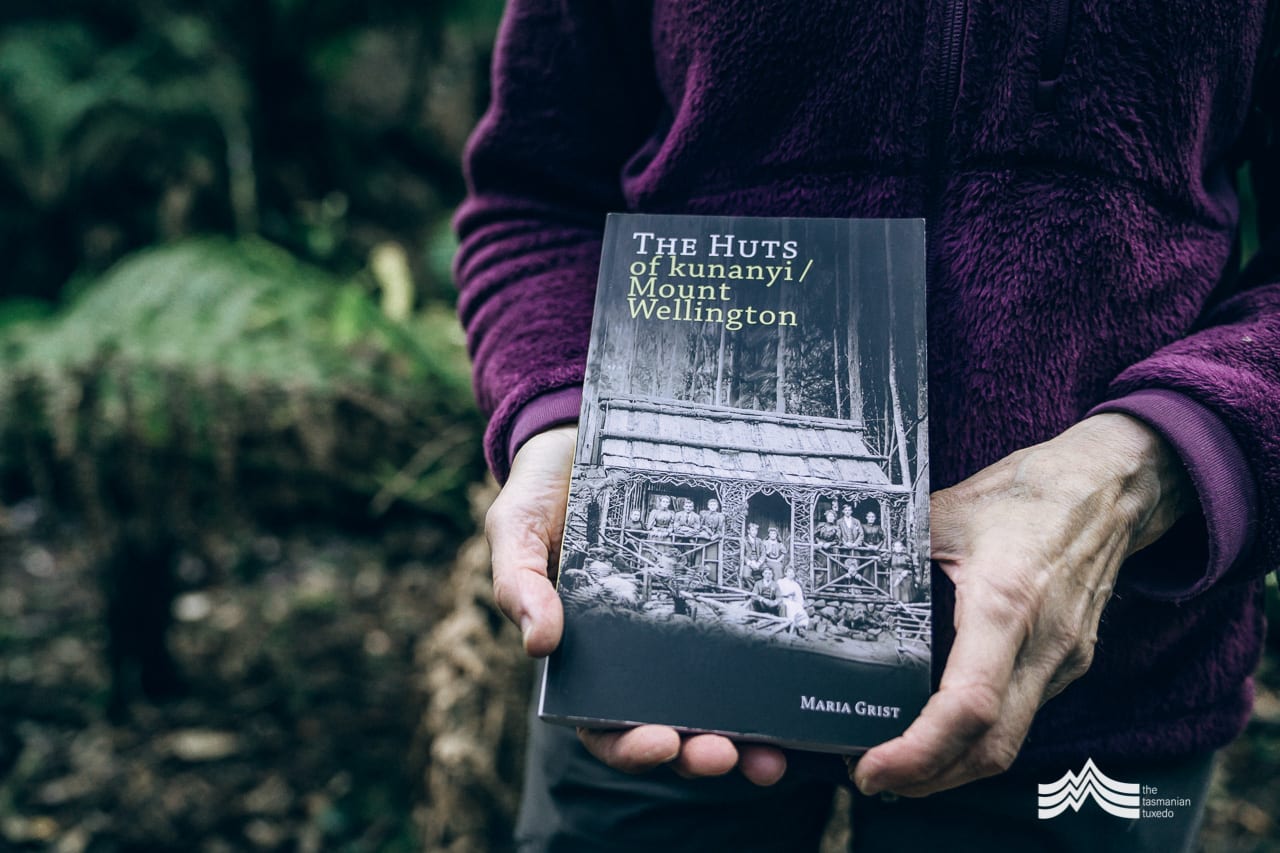 Whilst 25 huts have been documented in Maria’s book, the Grist’s are aware of close to 50 if you include stone shelters. “The huts were very famous at the time, and now they’re almost completely forgotten,” continues Maria. “They featured on postcards of the day and people came from all over Tasmania, interstate and overseas to visit them. The backs of some of my postcards have wonderful messages on them from visitors who were stunned by their beauty and workmanship.”

Maria says, “Each hut has its own history. Some we’ve managed to learn more about than others. It’s taken years of research and exploring. Some of the huts took us years to successfully locate…with the help of many others too. Often there’s very little evidence left…just some stones or tree fern plantings we have learnt to recognise. It’s a matter of piecing together the clues. We take photos into the field and see if we can place the hut in the right position in the landscape. Sometimes if you’re lucky you’ll uncover traces of old paths or see pieces of crockery and the like. Of course we leave all that in place…it’s part of the heritage of the area.” 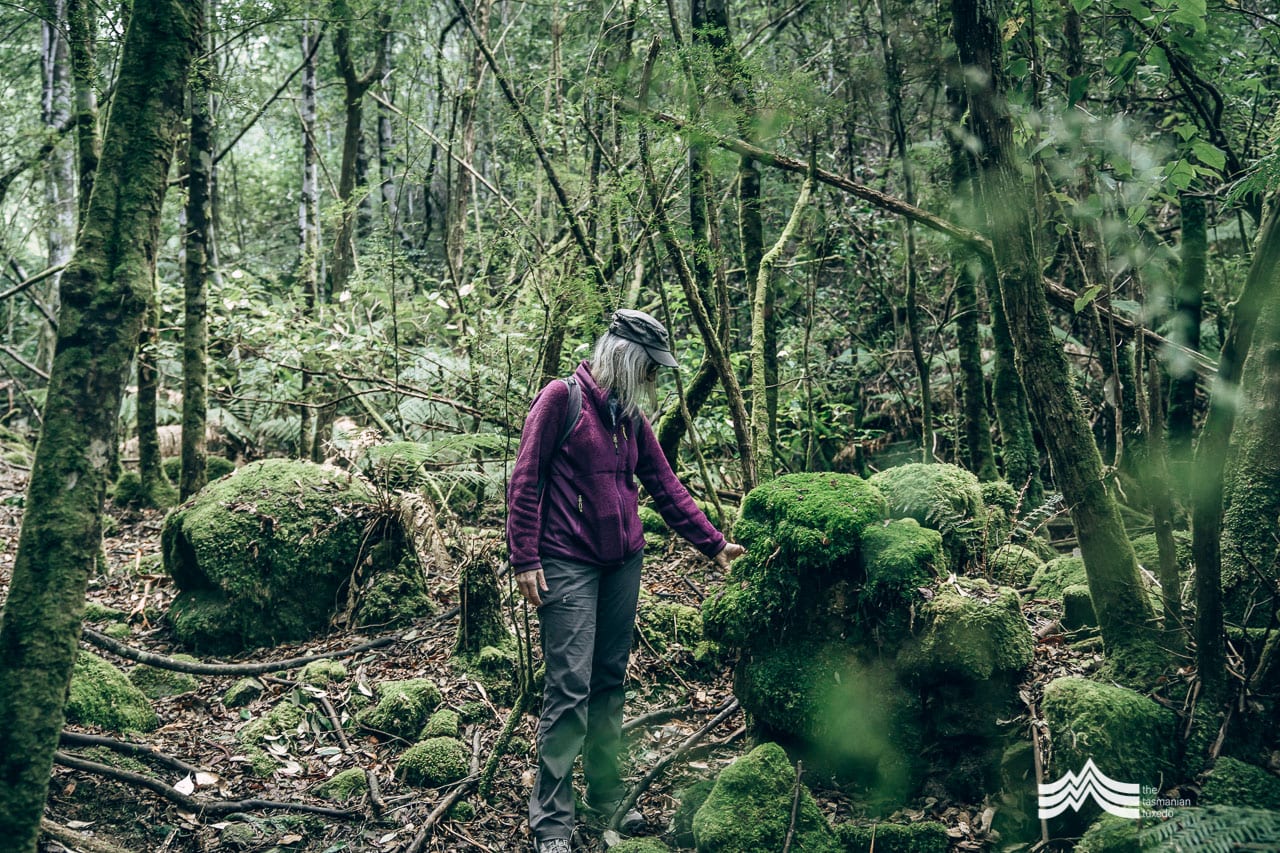 Whilst determining their location may have been difficult, deducing the interior of the huts is even more challenging. “There are very limited photographs of the inside of the huts,” says Maria. “Although, we do have a couple showing them well furnished and even decorated with artworks. Members would entertain guests for the weekend, have picnics, and even cook Sunday roasts. There are good number of beautiful photos showing visitors dressed in their finery enjoying the surroundings.”

These forgotten huts were a means to enjoy a walk on kunanyi’s slopes, breathe in her pristine air and relish in the calm away from the hustle and bustle. “The reasons people were drawn to the mountain haven’t really changed,” says Maria. “Picnics, cups of tea, walks, romance…it’s all still what we enjoy today. In that sense, nothing much has changed.”

Maria and John’s passion for the mountain is clearly evident in their home. Occupying one of the original police watch houses in Hobart, the pair are surrounded by history dating back to the 1840s. The space is filled with their archives and crowded with boxes containing all manner of treasures. It’s a long way from Maria’s birthplace in The Netherlands, but clearly one she is content in. “I arrived here when I was just two years old and have wonderful memories of my childhood. My father was a lighthouse keeper and we grew up barefoot and swimming on the Tasmanian coast.”

Gently stroking her soundly sleeping cat, Maria sums up her passion for what’s become a life’s work. “World War I was a trigger for change here, and many of the huts were lost after that or simply not rebuilt after fires. Whilst there is still so much I’d like to learn about many of them, I hope what I’ve gleaned over the decades is enjoyed by the people of Hobart for many years to come. My main motivation has just been to share this part of our cultural heritage.” 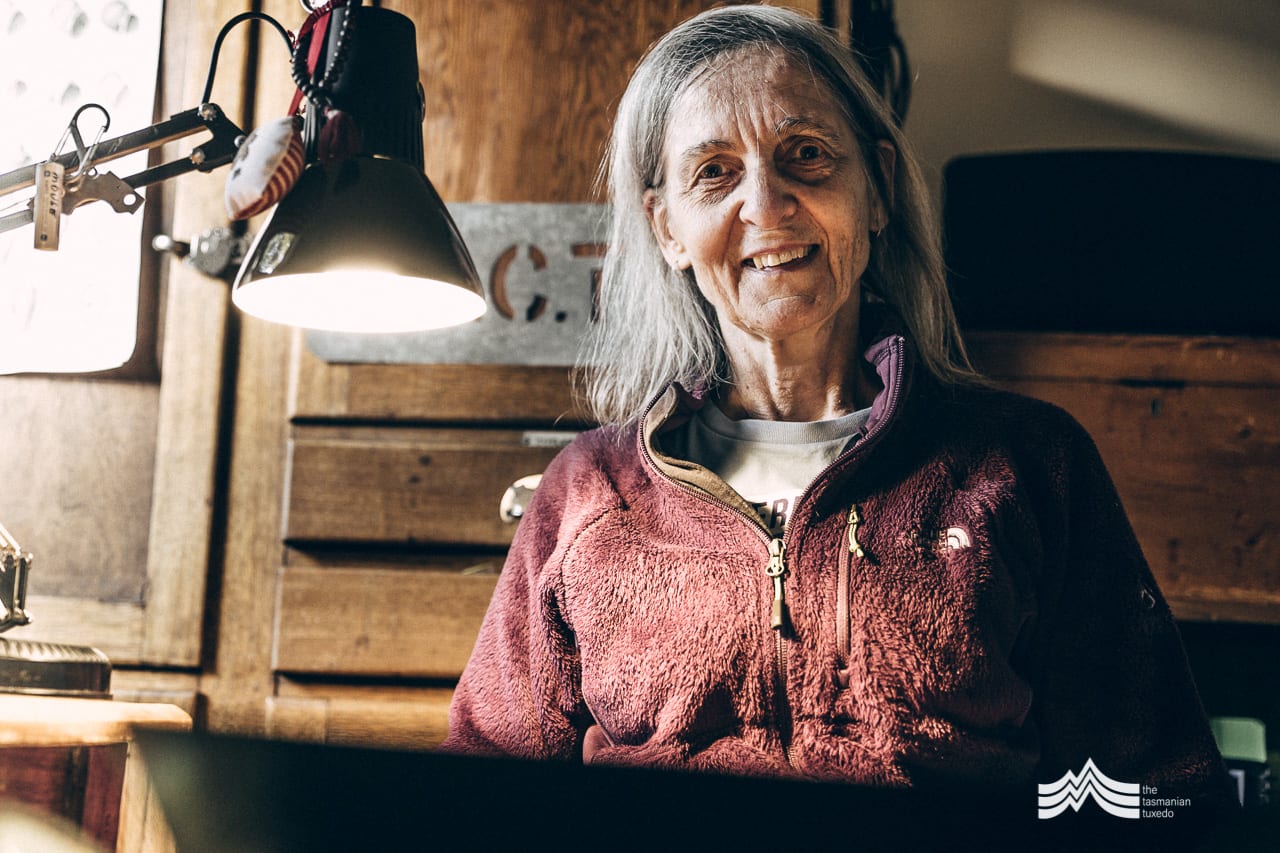 The Huts of kunanyi/Mount Wellington is available from all good Tasmanian bookstores or via Maria and John’s website.