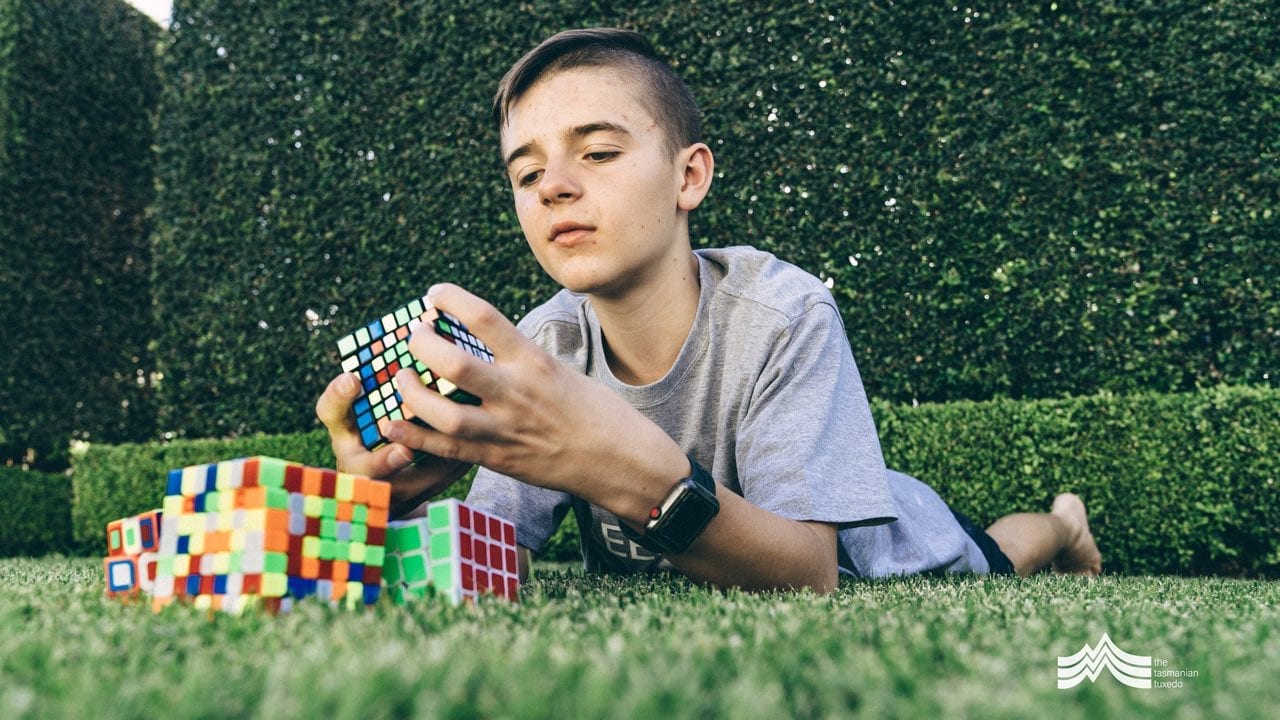 Sitting quietly practising his trade, one can only hear a soft clicking sound. With impressive finger dexterity, a cool demeanour and remarkable patience, you could be forgiven for thinking we were describing an accomplished lock picker. However this is the world of thirteen year old George Pelham, one of Tassie’s top speedcubers.

Coming off the back of the Australian Nationals, George is ranked within the top 20 cubers in the country. His fingers spin at lightning speed, solving the classic Rubik’s Cube in less than 10 seconds. “There are heaps of different cubes around now, but this one’s my favourite,” grins George. “My best time so far is nine seconds flat.” 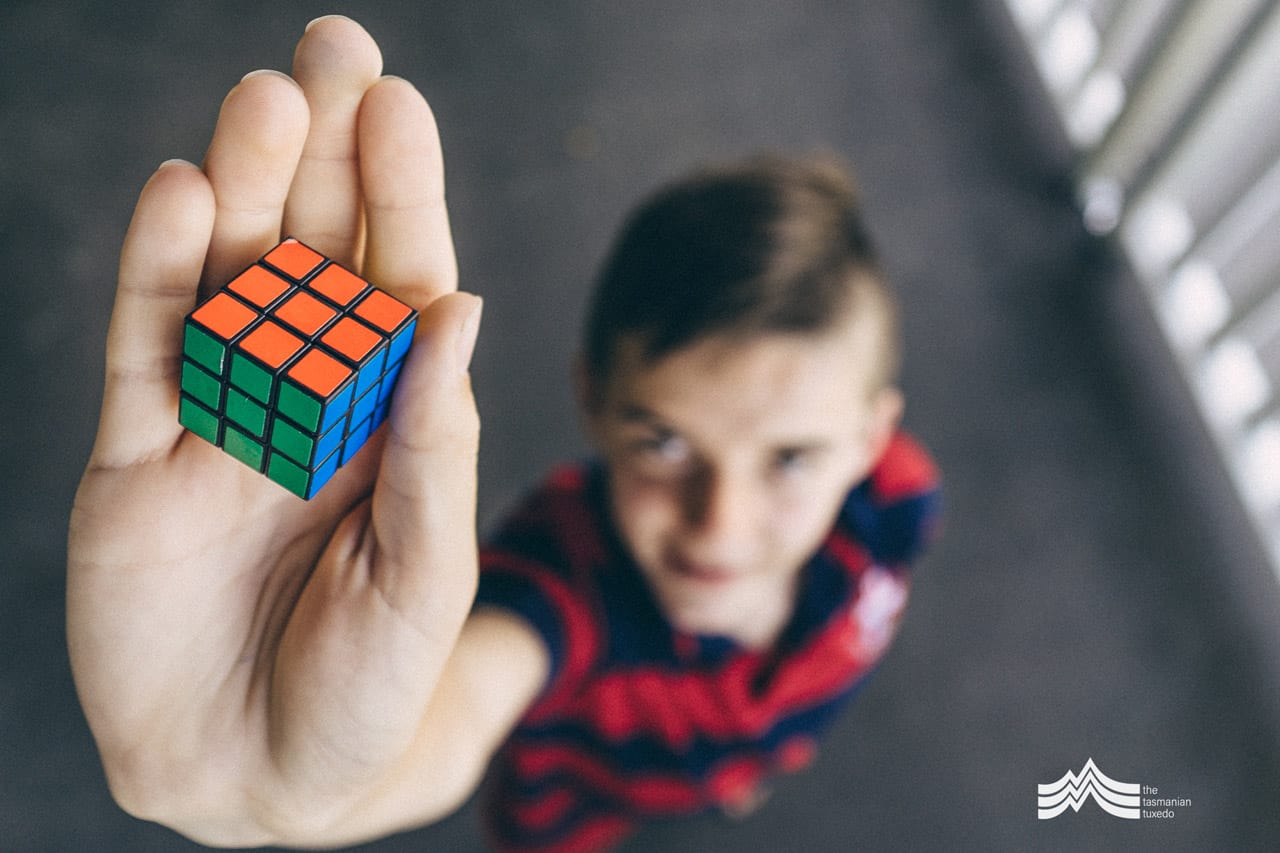 George’s ‘favourite’ burst onto the scene back in the mid 1970’s. The bright little 3D puzzle from Hungarian sculptor and architecture professor Ernő Rubik turned out to be the world’s bestselling puzzle game. Over forty years later, the six-sided cube continues to engage young and old alike. Who would have thought that a cube with six different coloured sides would command such an audience?

A relative newcomer to the game, George won a Rubik’s Cube at a birthday party three years ago and hasn’t looked back. “A friend of mine at school could solve it faster than me, so I took it on as a challenge to beat her,” he recalls. “I started at about four minutes and then got down to two minutes. I gradually got my time down enough to take her on. It just went on like that.”

When asked how one learns such a skill, George explains, “Lots of regular practice. I taught myself from a few YouTube videos and now I just practise a fair bit. You have to keep your finger dexterity up, so I’ll get my cubes out when I’m just relaxing watching TV and I’ll also spend some other time really thinking about strategies and looking for different solutions.” 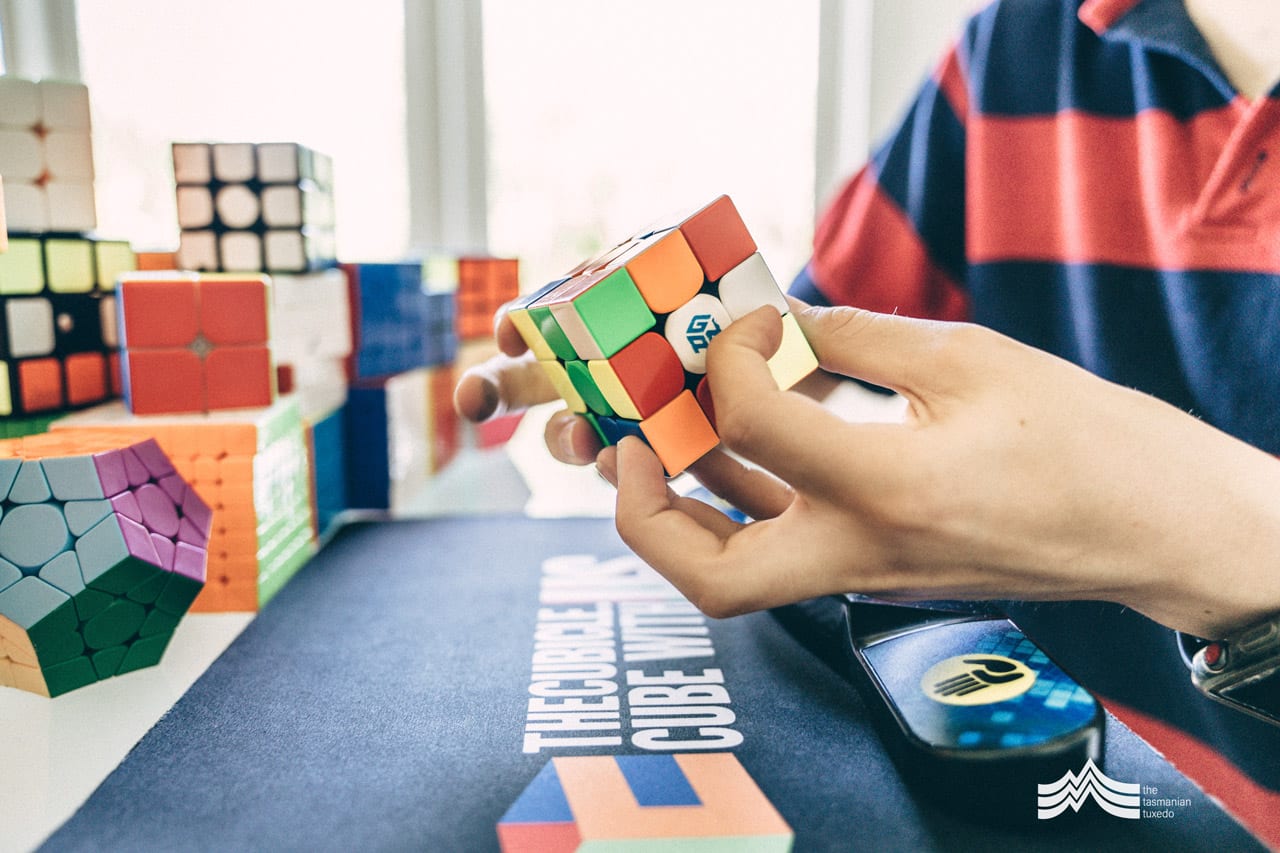 An impressive collection of hardware means George is always testing his abilities. He babbles excitedly as his eyes sweep over numerous baskets overflowing with colour, “I probably have about 80 different cubes.” He picks one up and starts playing, “The Megaminx is also a favourite of mine. It’s a dodecahedron so it has over 50 moving pieces. At the moment I can solve it in just under a minute and ten seconds.”

Thousands of cubing competitions across the globe are overseen by the World Cube Association each year. “The record holder here in Australia is Feliks Zemdegs, he’s a two-time world champion as well,” says George. “He can solve the classic cube in under five seconds.” Spend some time with George and you’ll learn that competitions are not just about the little old cube we all know and love either. “There are lots of different types of cubes, blindfolded events, one handed events…so many different categories.”

“But I like the original three by three the best,” states George definitively. “It’s not too trivial, but not too hard either. It’s the one I spend most of my time on.”

George explains that cubing strategies and finger speed lie at the core of his success. “It doesn’t really matter what type of cube you’re on, the strategies are fairly similar…you just have to tweak them a bit. I take some time to think about what I have learnt on one cube and then try that on new ones.” 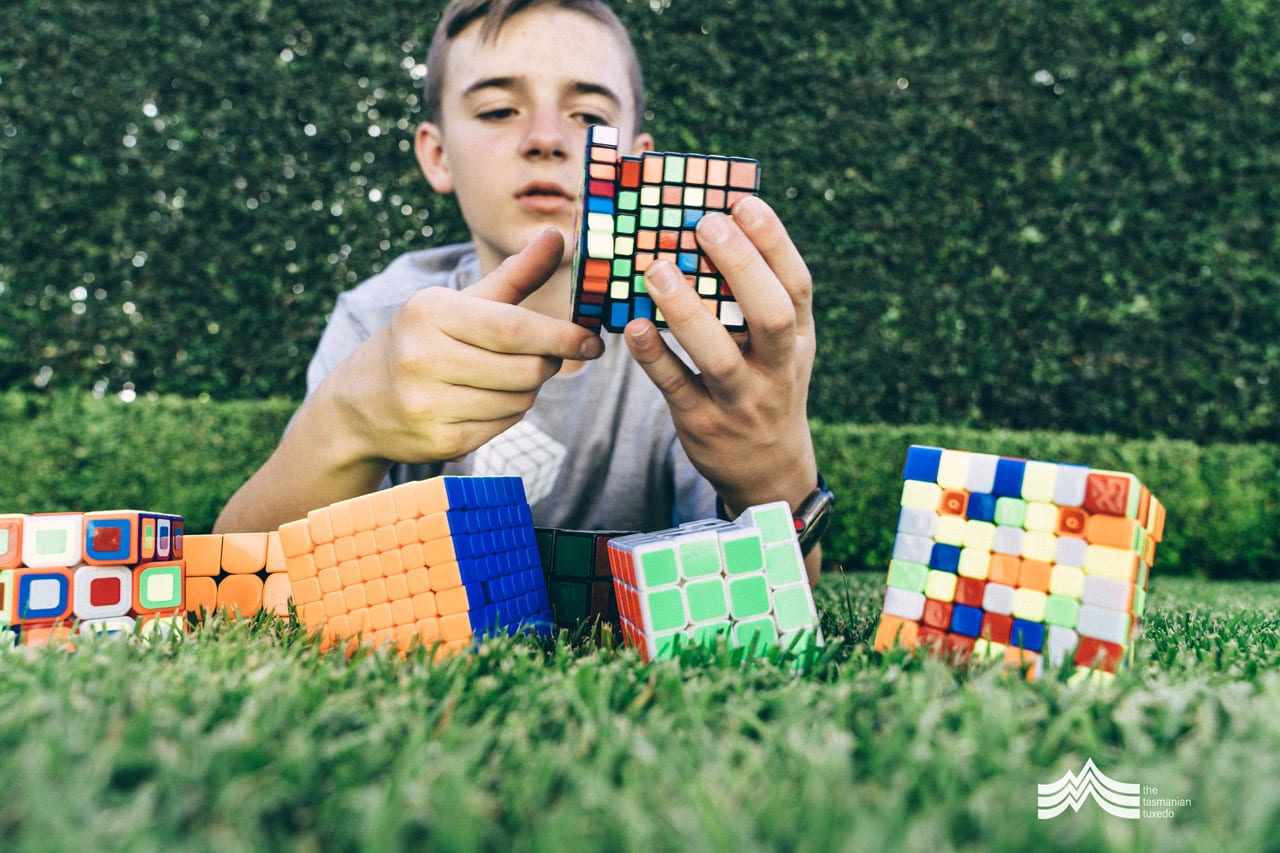 Cube hardware has evolved over the past 40 years. “Speed cubers need their cubes to spin really smoothly,” explains George. “I have to look after my cubes and oil them every so often so they turn just how I like them. In competitions you can use your own cube and it’s important that it turns smoothly…every split second is vital so if you over turn or under turn it can really cost you.”
Pulling out some tools and taking a cube apart gently, George explains, “You can tension your cube to suit your own hands. The faster it spins, the higher the risk you’ll make a mistake. It’s a bit of a balancing act to get it right.”

With world records hinging on combinations of finger agility and super quick decision making, George’s opinion is that cubing is 80% mental and 20% physical. “A lot is in your mind,” he reasons. “In high pressure situations you have to remain calm and think really quickly. That’s when all your practise really pays off.”

George speaks enthusiastically about his passion, “I love it because there are so many solutions. Apparently if you wrote them all down they would stretch to Pluto and back over 600 times! You never get the same scramble twice, so there’s always something new to think about.” It’s refreshing to hear a young man excited about a puzzle. “I love it because you can always improve. You can always get better and work out ways to do it in fewer moves.”

The cubing community in Tasmania is small but friendly. “We meet up and practise together,” says George. “I jump online too and chat with friends that I’ve made at big competitions. Everyone is pretty friendly so we talk on Skype a bit too.” 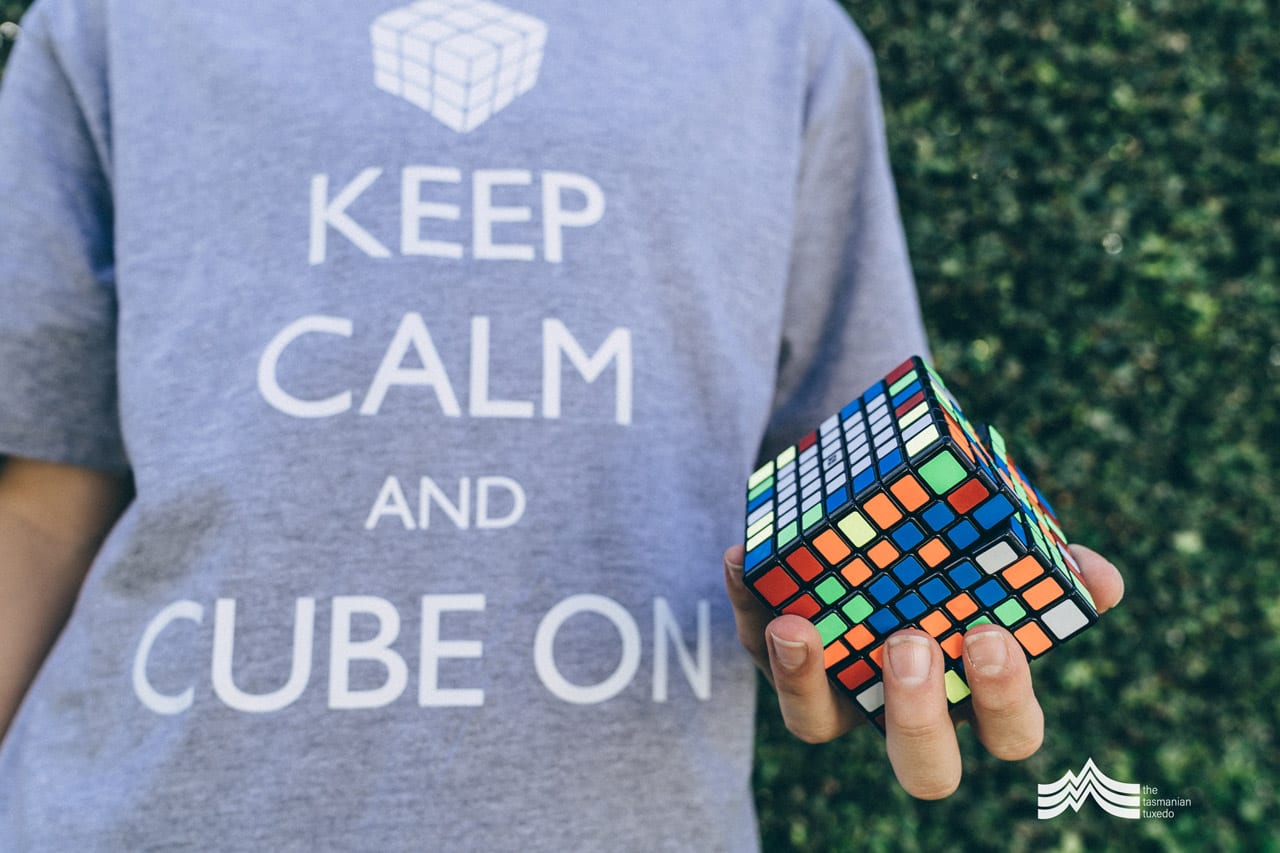 The top of the game for cubers is quite mind blowing. “The top cubers in the world can do 10 turns per second,” claims George. “I still have room for improvement.”

Commitment and determination pays off in other areas of George’s life. He’s actively involved in local theatre and loves taking to the stage both singing and acting. Whilst cubing and musical theatre don’t typically go together, it seems to be working pretty well for this young livewire.

By comparison you can easily see how George’s penchant for strategy and speed could readily be applied to the sporting arena. “I play water polo and soccer. I really like both of them,” says George. With a cheeky smile he also adds, “I’m a pretty quick typist too…and my favourite subject at school is maths.”

It’s not hard to see why George. 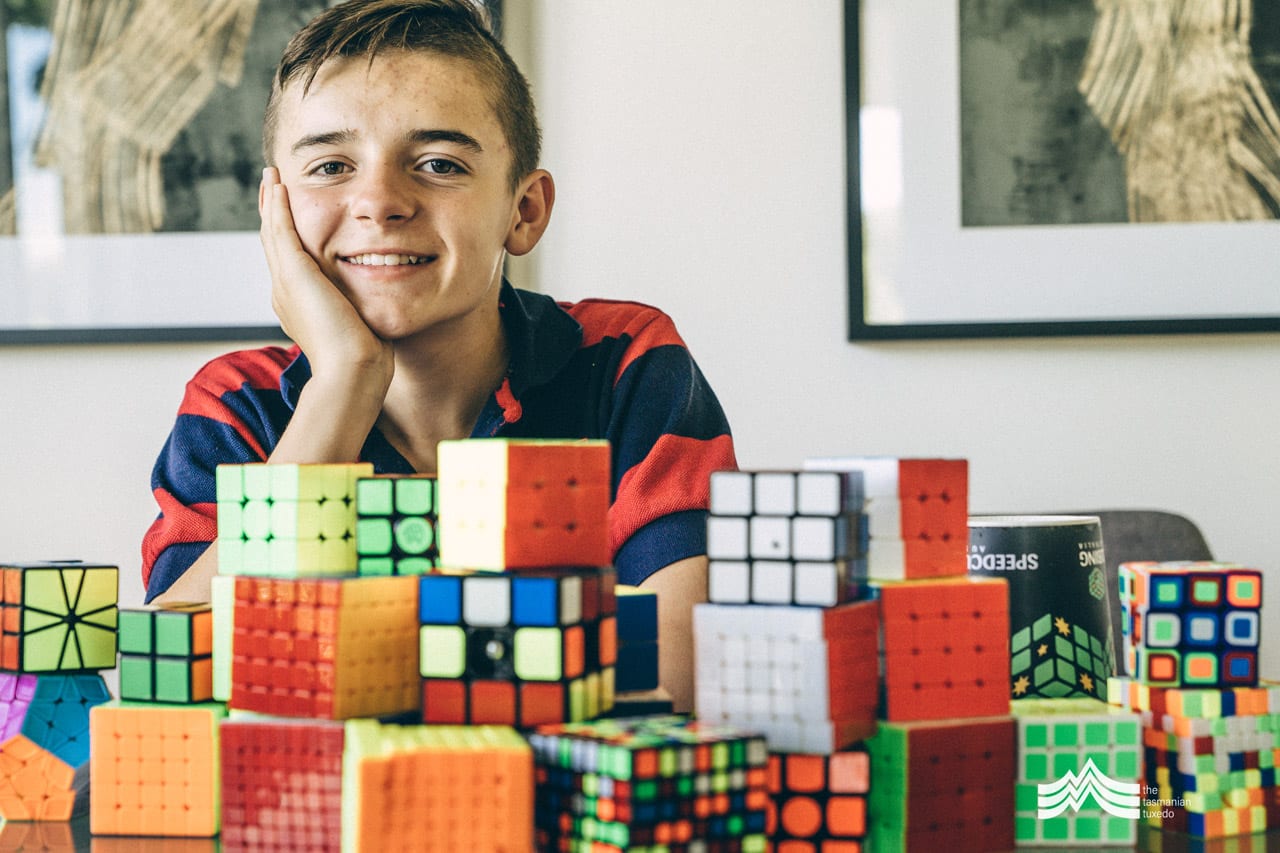