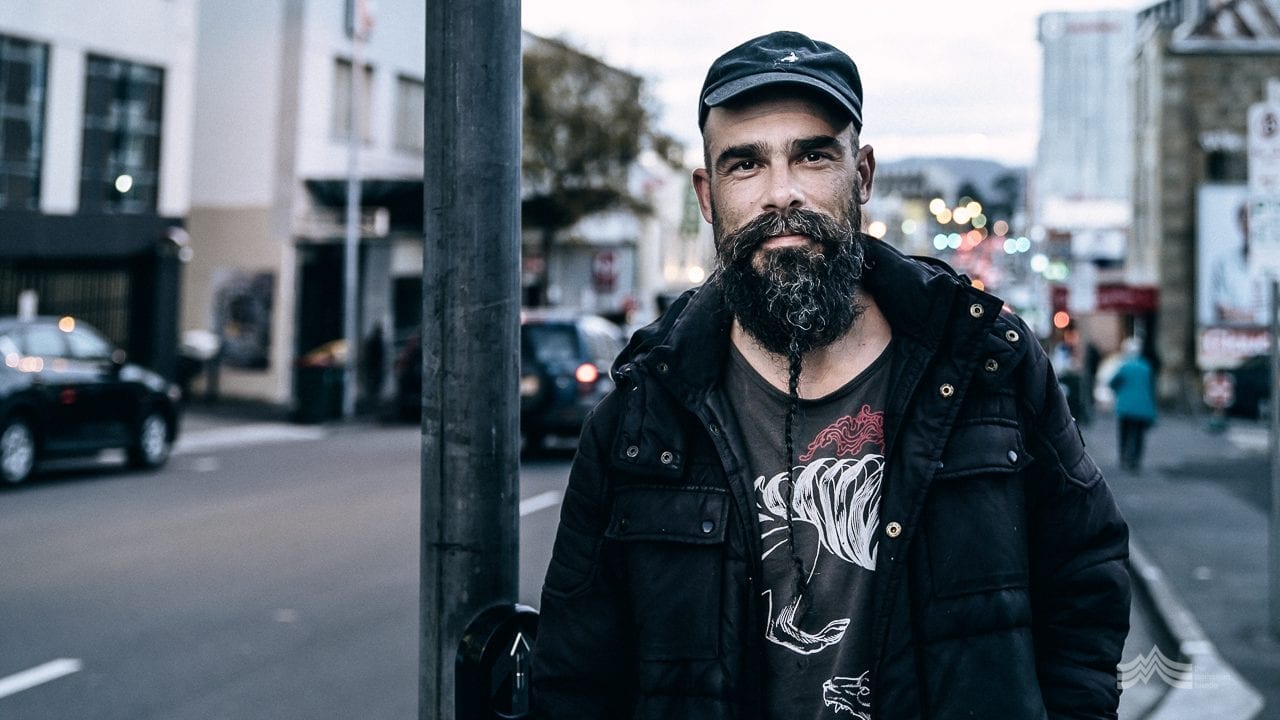 One of Tasmania’s most distinctive street artists, Jamin is an edgy bundle of intriguing perceptions. This expressive soul fuelled by Zen and Deleuze, and shaped by science and music, crafts vibrant works that emerge gloriously from the dullest of spaces.

Jamin himself is the ultimate transformer.

Smiling eyes and a warm grin are gateways to Jamin’s open and honest character. Chatting away on a brisk winter’s afternoon in a bustling city café, he reflects on a childhood submerged in Hobart’s quiet eastern shore suburbs. “I always enjoyed art at school, and did quite well at it. It got to the stage where I wanted to go to art school, however my parents weren’t particularly keen. I had a friend who suggested I bide my time and wait a little in order to get the most out of it.” Pausing he adds, “I thought that was a pretty good suggestion.” 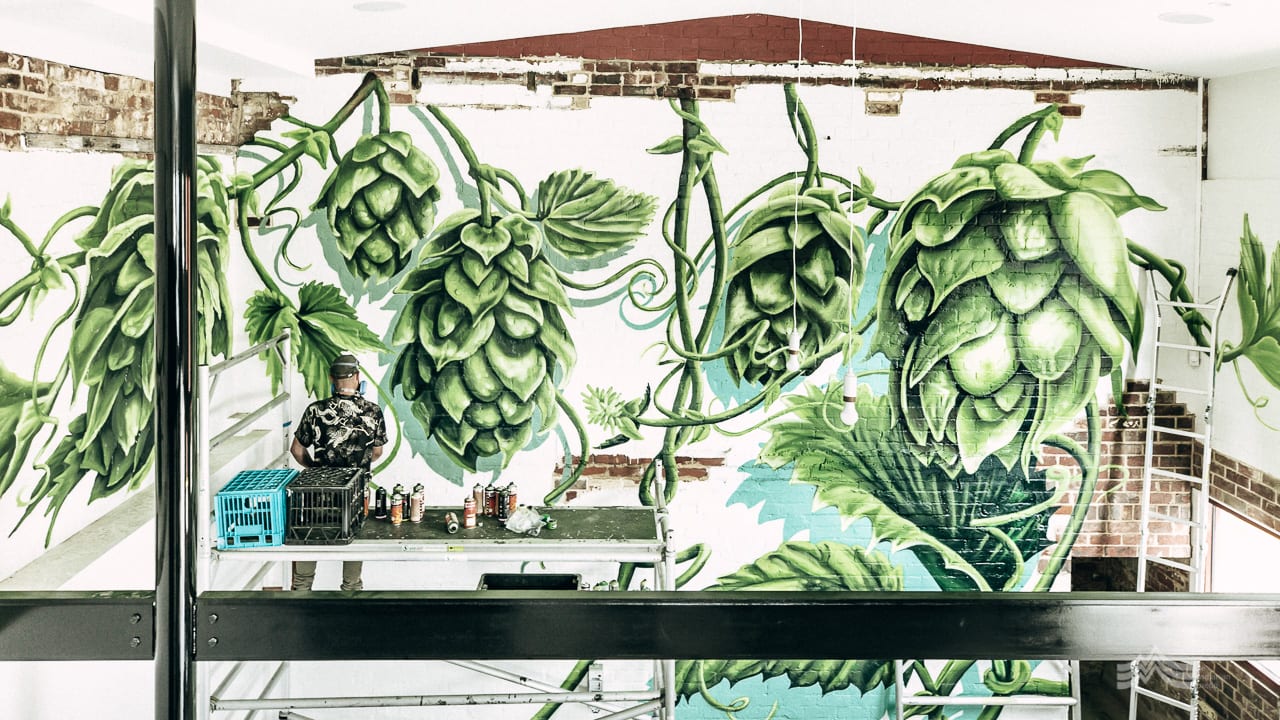 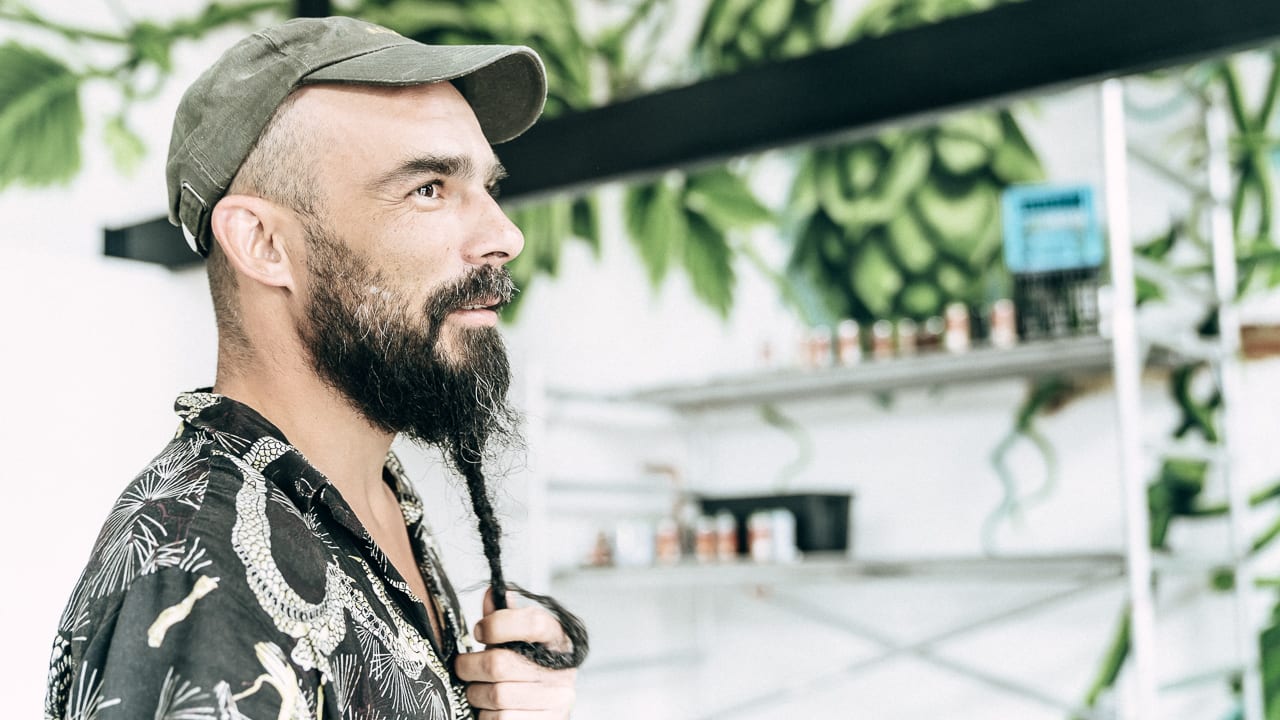 Heeding the advice, Jamin took up a graphic pre-press apprenticeship instead. “That gave me a good grounding in terms of industry understanding, and the space to consider exactly what I wanted to do at art school. From the outset, I knew I wanted that time to be relevant.”

“Those early days studying art school were pretty wild…you know what it’s like at uni,” he says with a mischievous glint in his eye, “But my father passed away suddenly during my first year and that had a huge effect on me. My work and my grades really suffered and I just scraped through.” Recalling those difficult times he says, “I took some time off after that and went travelling. It was a bit of a vision quest. I spent time around Tassie…in the bush…and then also up around Byron Bay. I needed that journey to process what had happened… it took that period of time for me to come to terms with my father’s death.”

With the passage of time, life guided Jamin back home to Tasmania – and into fatherhood. “Returning home and then the birth of my kids, River and Mia, really spurred me on to address things that had been left unresolved in my life. I returned to art school to finish my degree and found it to be the right time. I did well and went on to complete both honours and masters degrees.” 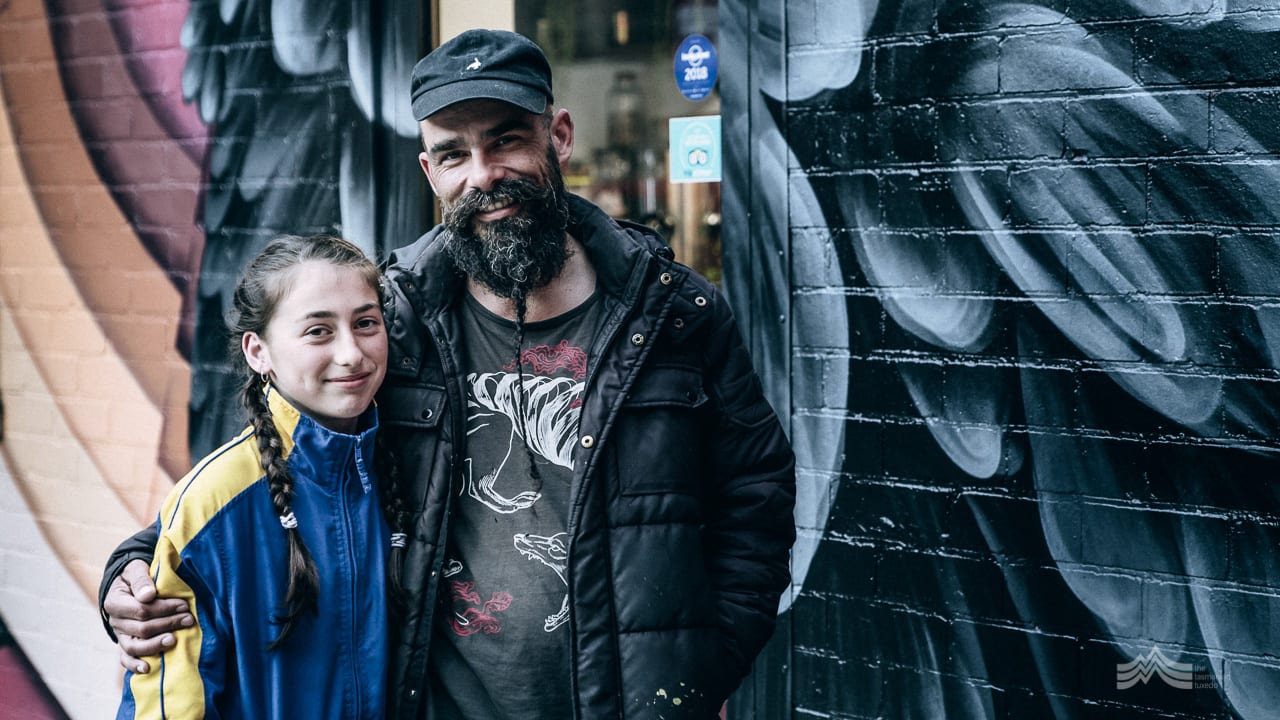 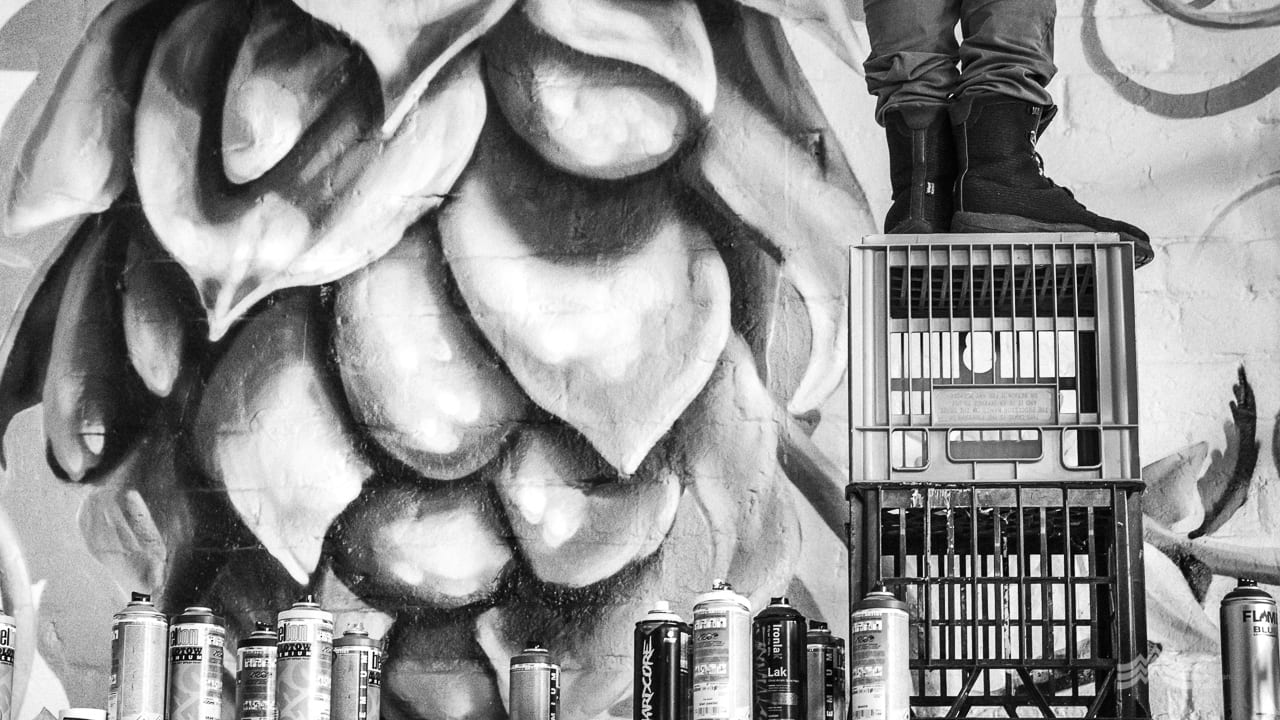 “Earlier on I was into street art on a more fugitive level,” explains Jamin. “I was involved in the stencil scene but over time my street works evolved into a more freehand style. Whilst at Uni I became more aware of my practice and gained inspiration and friendship from the likes of Tom O’Hern and Nic Paice as my style evolved over that period…we started an energetic collective called Die Laughing, making fairly political art and it was great that the public interacted and engaged with our works.”

Jamin’s work has since gone on to be recognised on a variety of levels. As a young emerging artist he was awarded the Devonport Regional Gallery Solo Commission in 2007 and the following year was selected for Contemporary Australia: Optimism at the Gallery of Modern Art (GoMA) in Brisbane. Jamin’s skills and warm persona were also in demand academically and he quickly found he could make a living from teaching, guiding others on their own artistic journeys.

But it was being awarded the Rosamond McCulloch Studio Residency in Paris during 2011 that made a real mark on his artistic career. “I took the family and we firstly spent time in Italy together before I went on to Paris for the residency. I completed four large walls while I was there and they were really well received.” He speaks fondly of the experience, “I really felt like I found my calling painting walls there, and the support and feedback I received gave me the confidence to resign from teaching when I returned home. I knew what I wanted to do, and so it was time to step away from the stability of the teaching income and take a risk with full time art.” 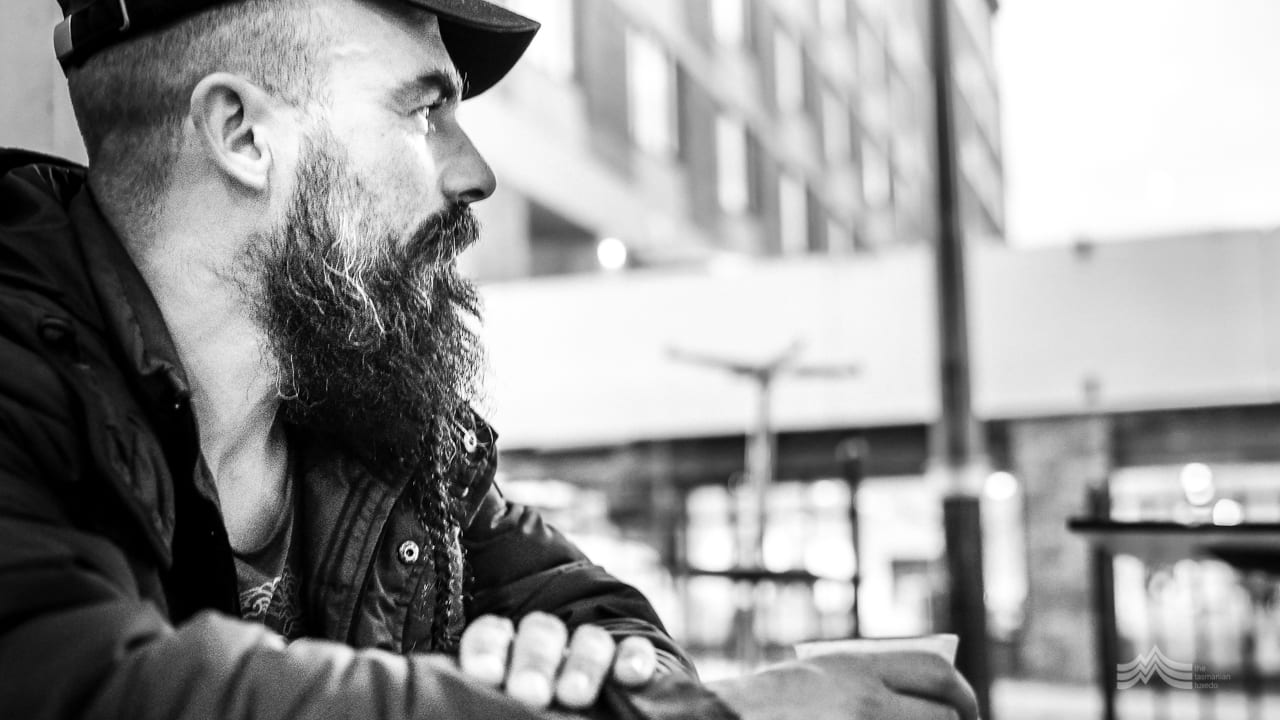 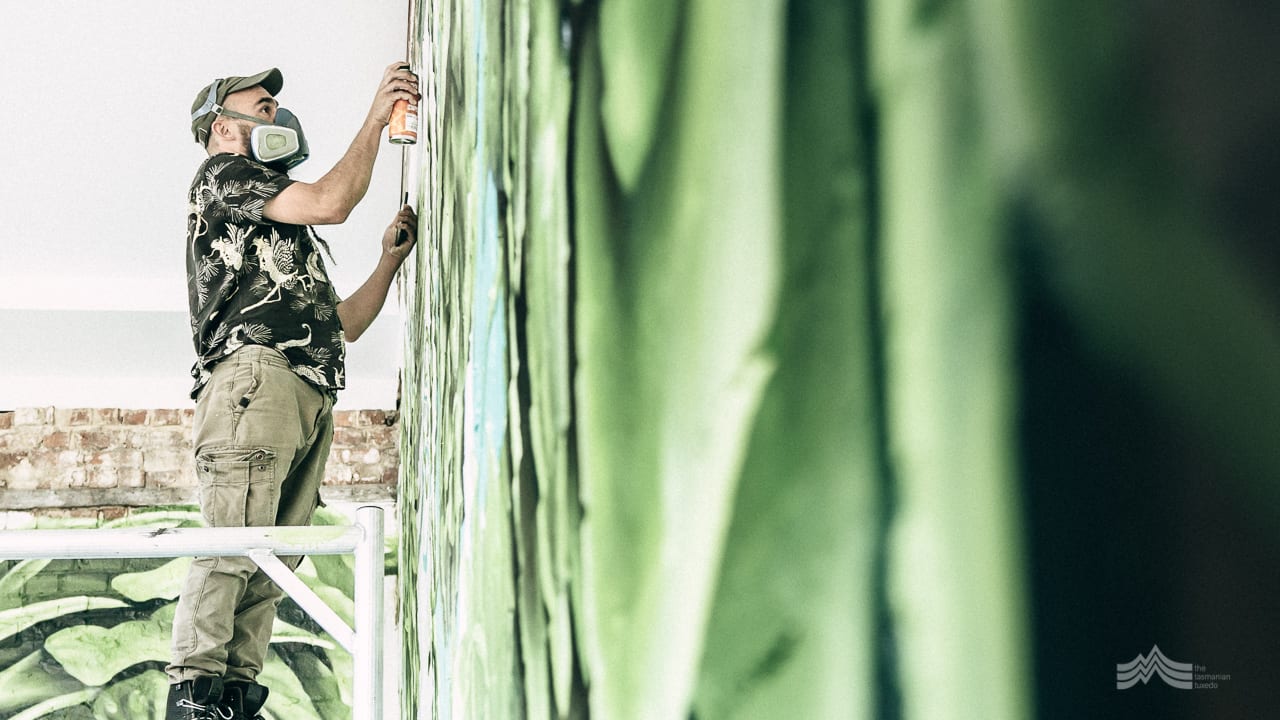 Looking back on those early days out on his own, Jamin says, “It was slow for the first couple of years, but I held on and kept working at it. The advent of social media certainly changed things as street art became both more accessible and acceptable. Earlier on it had been a real vigilante style art form and anything we did the councils cleaned up as early as 6am the following morning. Over the past 15 years I’ve seen it morph into something that people are actively seeking out, rather than covering up. That evolution has been fascinating to watch.” 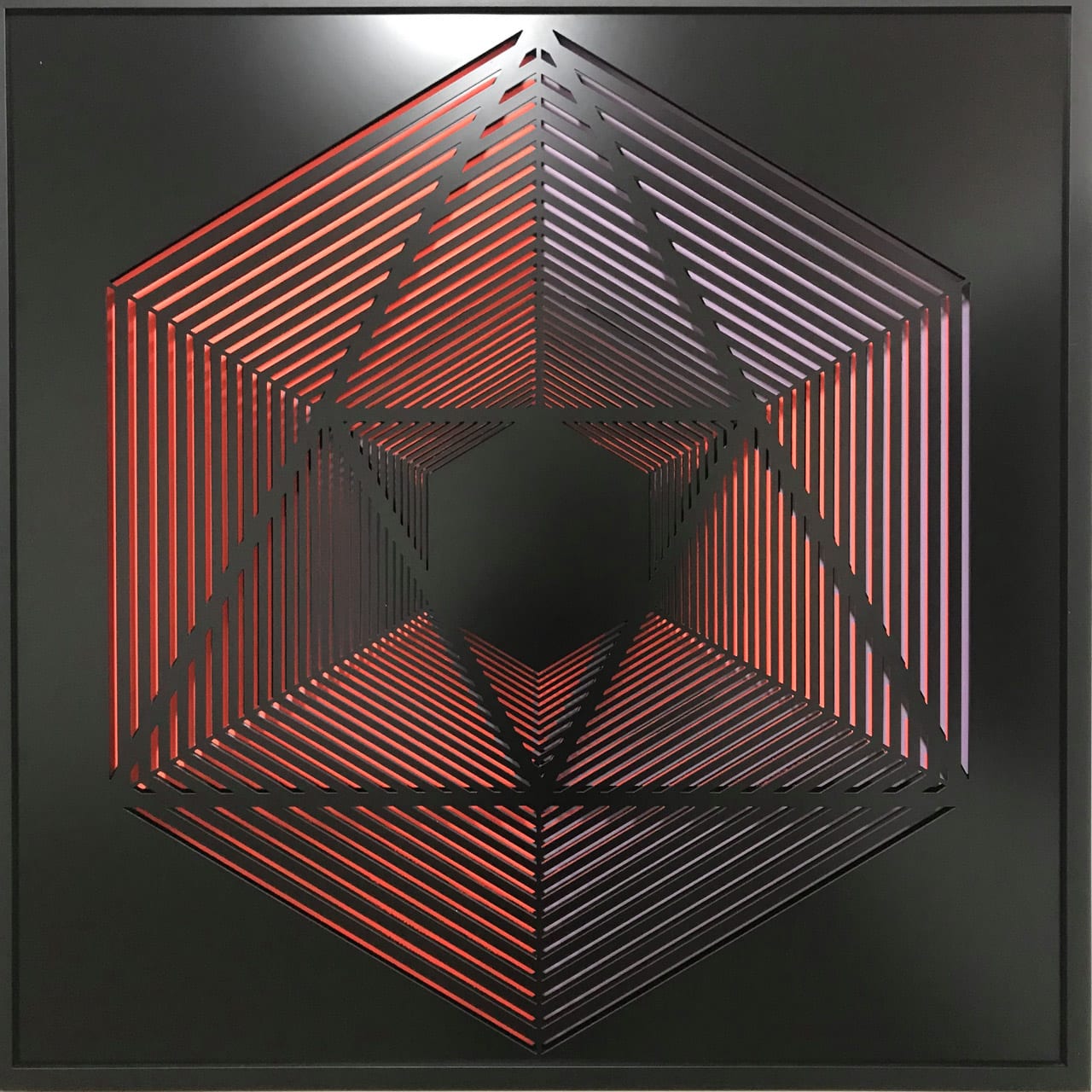 From Hobart to Moscow, Launceston to Paris, and Melbourne to Bangkok, Jamin’s eye-catching mural works now adorn all manner of spaces. His dynamic engagement with the flow of new, and sometimes radical, ideas often nurtures experimental approaches that deliver innovative results. “As well as being a muralist, I’ve consistently had exhibitions every couple of years. I guess that’s the more rigorous, or academic, side of what I do.”

A strong background in stencil art remains evident in many of Jamin’s works, with geometric designs morphing almost intuitively with elements from the natural world. Flora and fauna often feature and Hobart locals are privileged to enjoy many of his works as they move about the city. The magnificent black cockatoos adorning the Farm Gate Market headquarters, the large Macaw that greets drivers coming into North Hobart on Born in Brunswick, and the large cat lounging on the side of the Cat Clinic in New Town are popular local favourites. 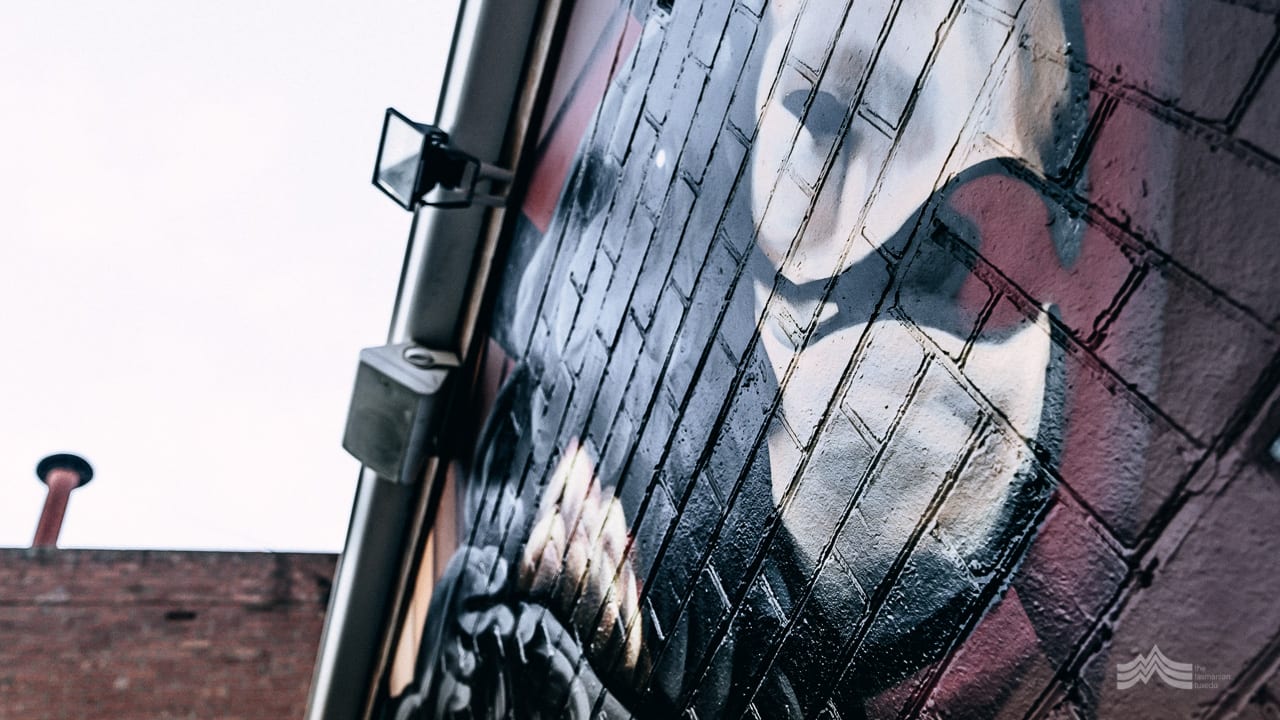 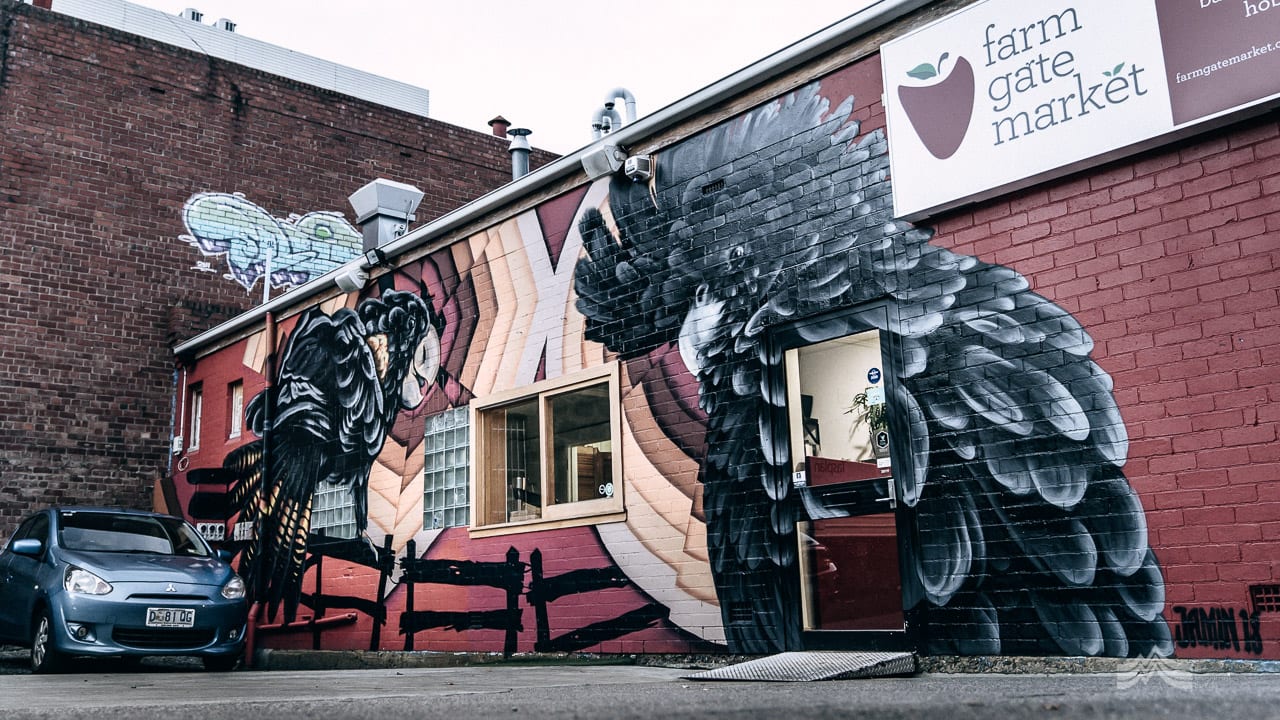 “It’s funny what people notice,” grins Jamin. “Some people are highly attuned to street art and others never see it. I guess once you start looking you see it everywhere. One time this cab driver asked me what I did for a living, and I pointed out one of my larger walls to him, and he said, ‘You know, I drive past that every day and I’ve never noticed it until now.’ It’s funny like that.”

Jamin has a keen fascination with the interaction of identity, persona and camouflage. “The concept of persona and masks is one I find particularly interesting,” he explains. “Something like the fugitive nature of identity… what’s behind all of the various personas we inhabit in our lives? We interact with the world through what we see and feel, the surface levels of things… perhaps that’s all there is.” 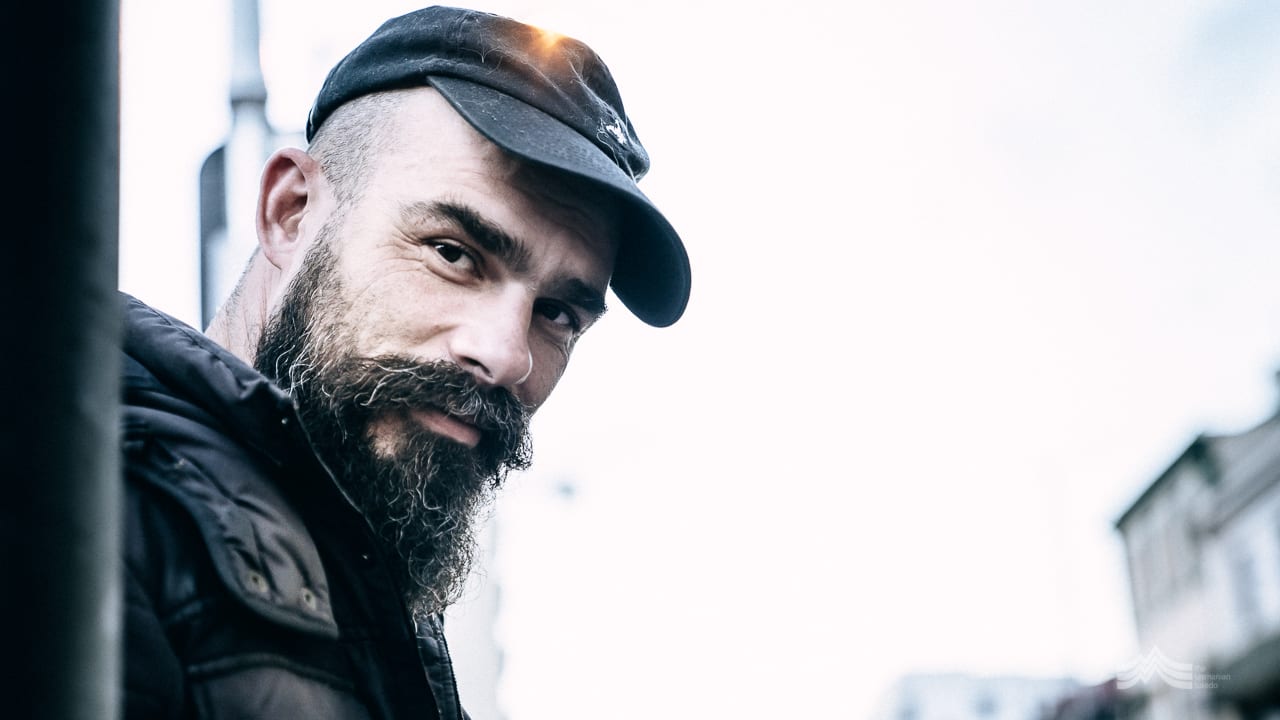 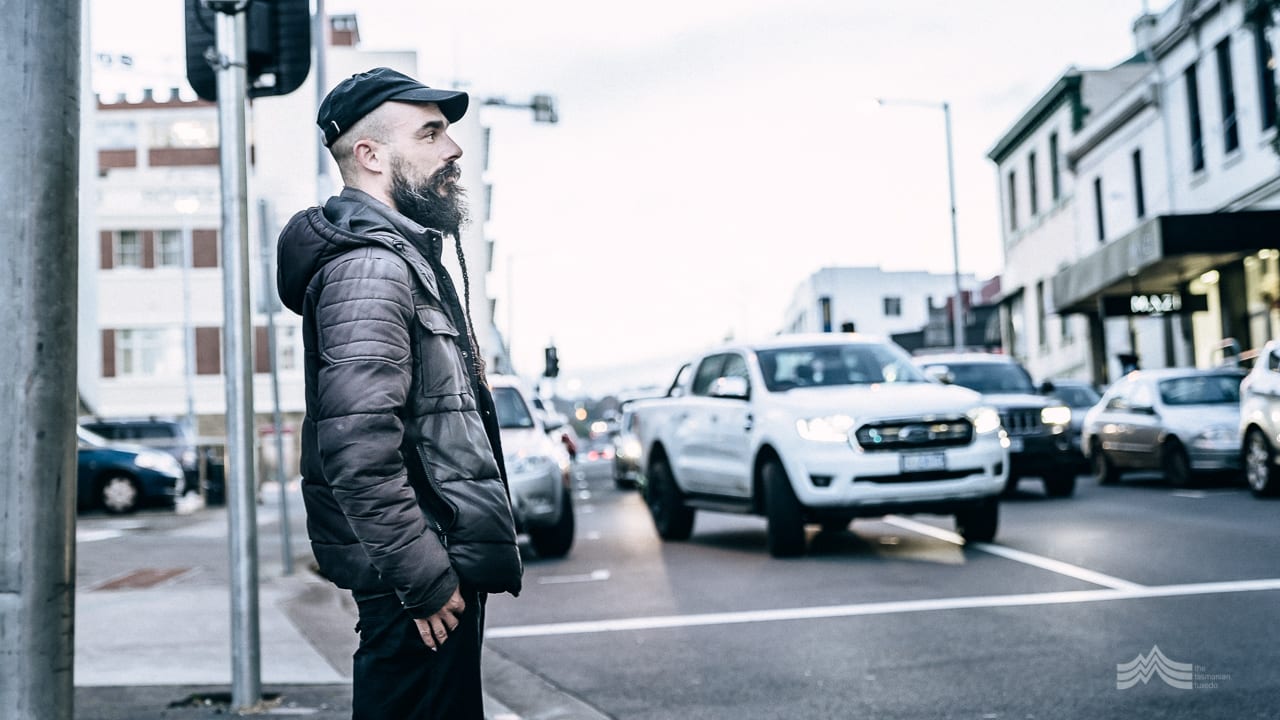 ‘My mother is from India,” continues Jamin. “Perhaps that’s what got me interested in eastern philosophy. I’ve spent a lot of time reading these materials and try to translate them into my art and everyday.” He adds, “Some time spent training in martial arts also got me interested in the practical aspects of Zen… a very transformative practice. These things certainly influence what I do.”

Considering the evolution of street art in Tassie, Jamin muses, “Compared to larger cities that are more diverse and draw from more widespread influences, we’re closer together here being an island so we tend to find inspiration from peers. I think it’s a lot like music. In Tassie we have a certain edge…we’re a bit darker and more humorous than some other places. Our style looks out at the rest of the world a little cynically, it’s like we’re sitting down here observing and laughing a bit. We have our own unique perspective.”

Jamin’s dealt with every variation of client over the past decade. “Some have very set ideas and others are far more open to my concepts. Occasionally it can be a little difficult managing different creative voices and expectations when the outcomes are artistic.” He describes the most rewarding scenario, “The best outcomes usually result when there is a happy balance between artistic outcomes and a client’s expectations. There’s nothing better than when we’ve both had a great time and you can often sense that in the end product.”

“I see the artistic process as quite rigorous,” explains Jamin. “That journey of making the work and then the reflection and the learning.”

Speaking of his creative process, Jamin grins, “It changes all the time. I’m always collecting visual references…colours, ideas, patterns…kind of by osmosis. I used to keep a journal and scrapbook but that’s less organised now, maybe partly because I find certain tangents that work and explore them. I’ve assembled many key components that work well for me and they often form a backbone.” He adds thoughtfully, “There’s always opportunity to invent and create, and sometimes the best ideas come on the fly so I tend to leave room to fold them in.”

Currently working through the final moments of his PhD thesis, Jamin says, “That’s been a big arc of time that’s now coming to the end. I’m working on the final installation and am really looking forward to that being completed.” As he draws a close on this particular exploration of camouflage and persona, one can only surmise this is anything but the end. It’s the beginning of another glorious era for this dynamic local artist. 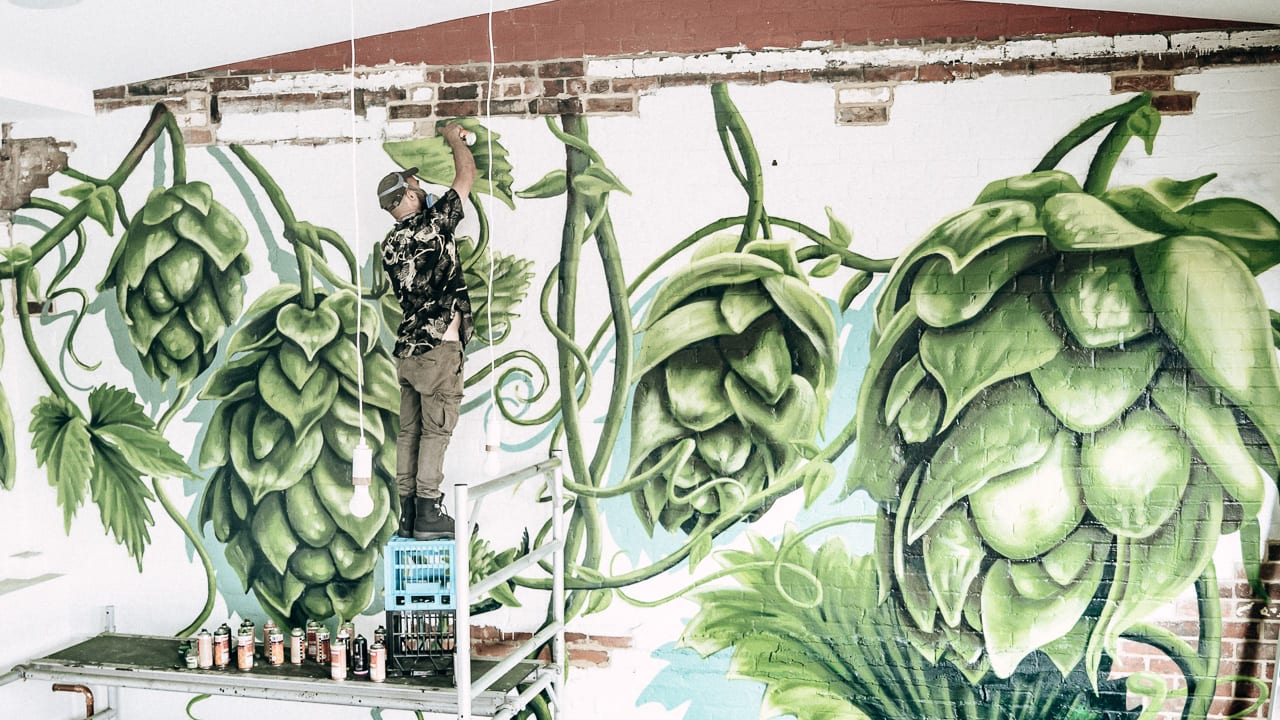 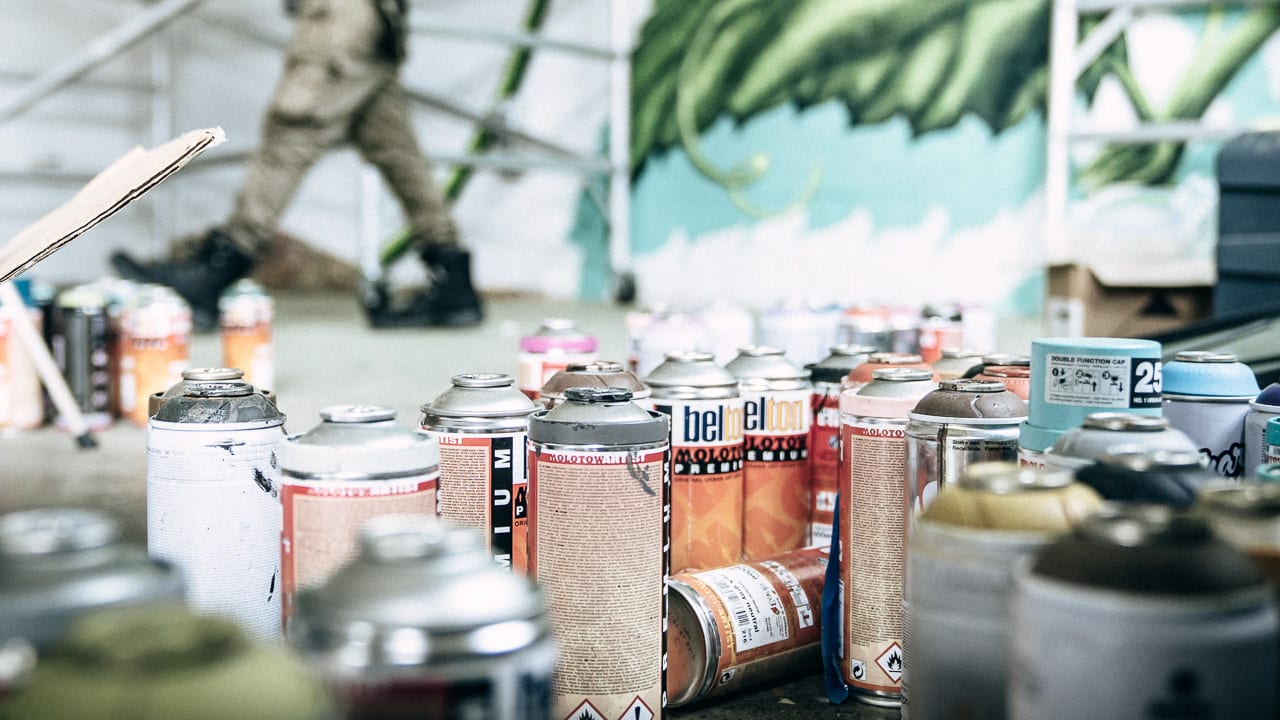 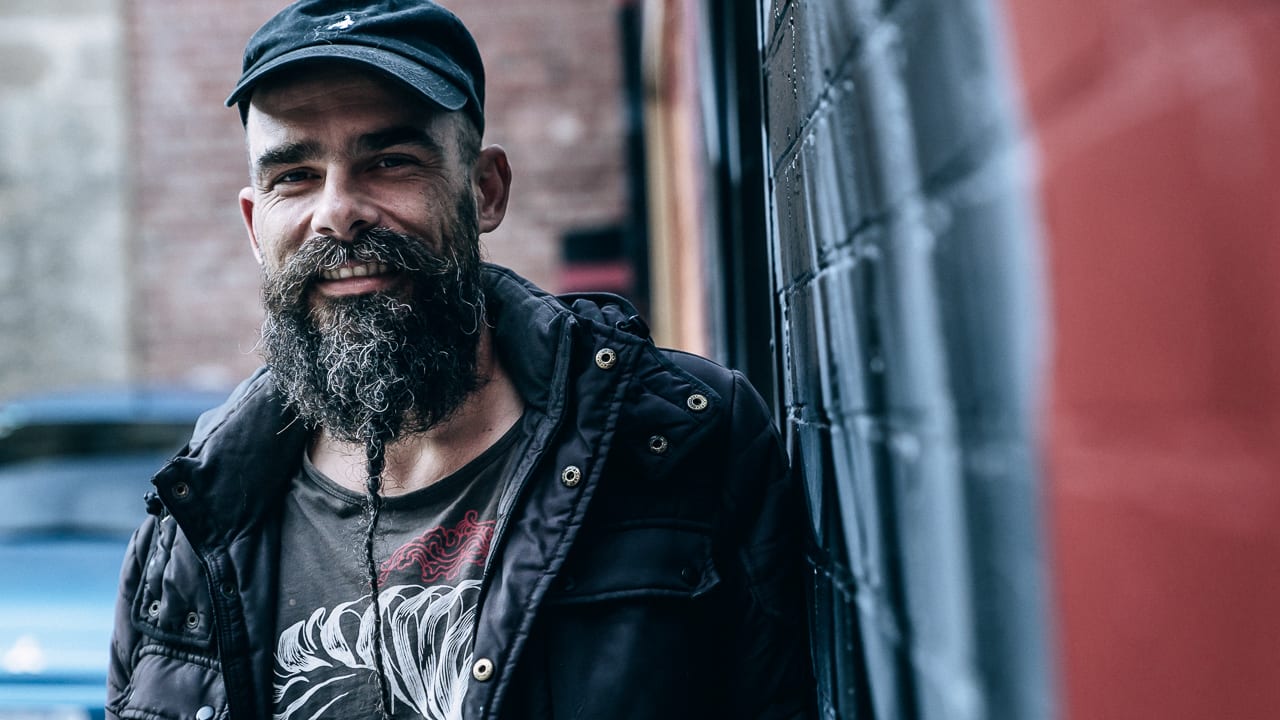 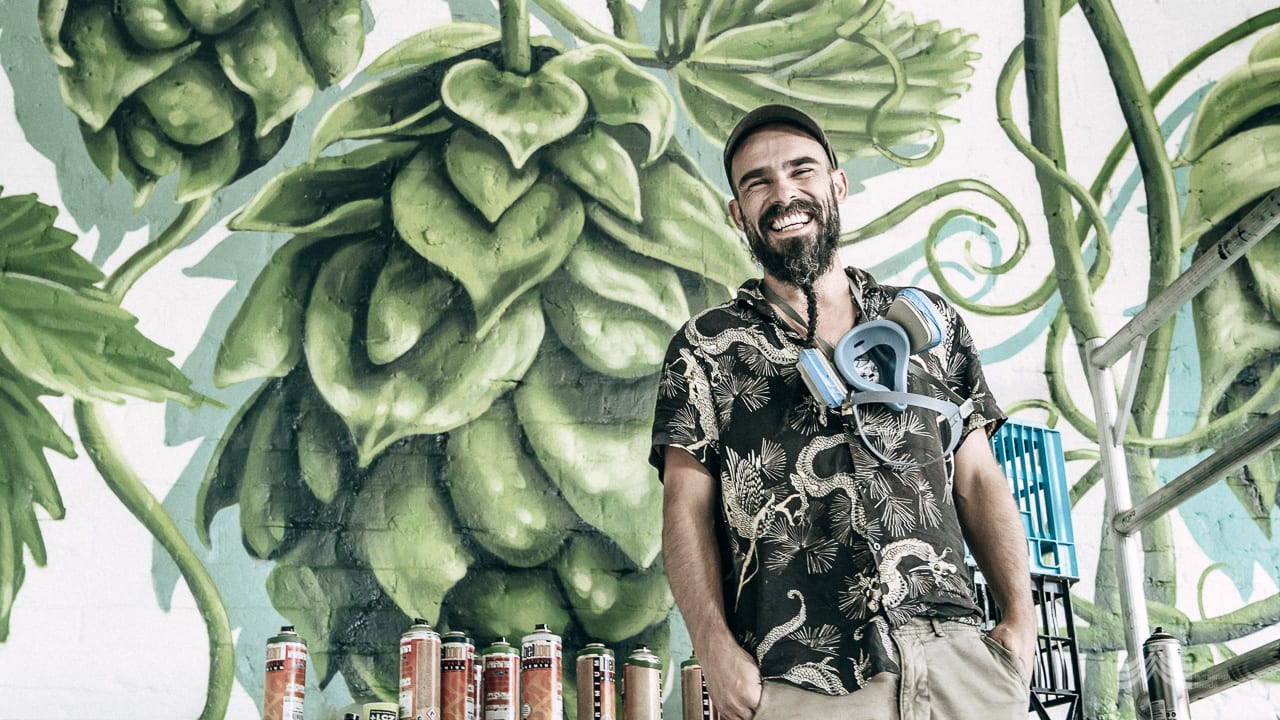